Butcherbirds return to breed in England

Conservationists are celebrating the successful breeding of a pair of Red-backed Shrikes, despite the attentions of convicted egg collectors visiting the breeding site. This is the first successful nesting in England since 1992, when the last pair bred in East Anglia.

The birds, at a secret location on Dartmoor, have been under close watch since May to guarantee their safety. RSPB staff and volunteers from the Dartmoor Study Group and Devon Bird Watching & Preservation Society spent more 2,600 hours on site, working around the clock. The protection scheme has also been supported by the Forestry Commission, Natural England, Devon and Cornwall Constabulary and Dartmoor National Park Authority. The watch proved completely justified as a number of convicted egg collectors visited the site during the operation. 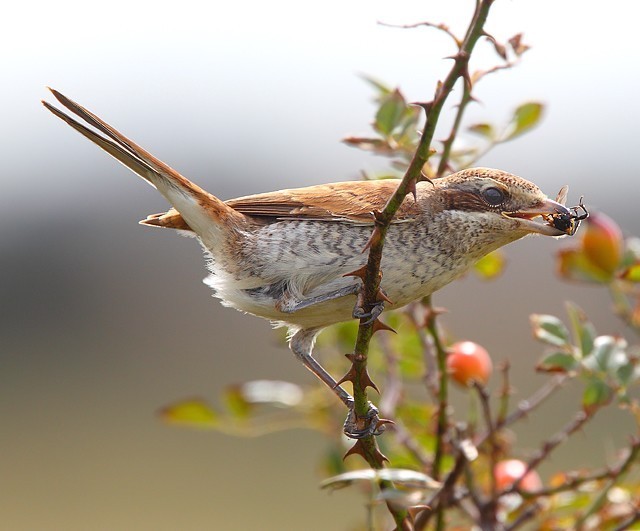 Kevin Rylands, from the RSPB, said: "We were delighted with the first sightings of the pair in May, but even more delighted when they settled down to nest. Although it's been hard work, the efforts of all our staff and volunteers have really paid off and we have three youngsters flitting about the site."

He added: "Surveys have shown that Dartmoor holds a wealth of species previously widespread in lowland areas such as Cuckoo and Whinchat. The shrikes will have arrived on spring migration and found the site to their liking. The extent of habitat and numbers of large insects on the moor have no doubt contributed to the success of this nest."

Ben Philipps, from Forestry Commission England, said: "It's been great to help keep these birds safe from the criminal activities of egg thieves. We're also pleased that the shrikes have chosen an area on Dartmoor we have improved for native wildlife over the past 10 years by increasing the diversity of the habitats."

Roger Smaldon, one of the team of dedicated volunteers, commented: "The last recorded breeding on Dartmoor was near Meldon Reservoir in 1970, so this nesting attempt was far from expected, especially when the national picture of nesting has been totally negative for the past two decades. It means a great deal to be part of the team monitoring this success, and in these days when so many species are under threat, it is a privilege to be a part of this positive happening."