Bittern monitoring in the UK: summary of the 2010 breeding season 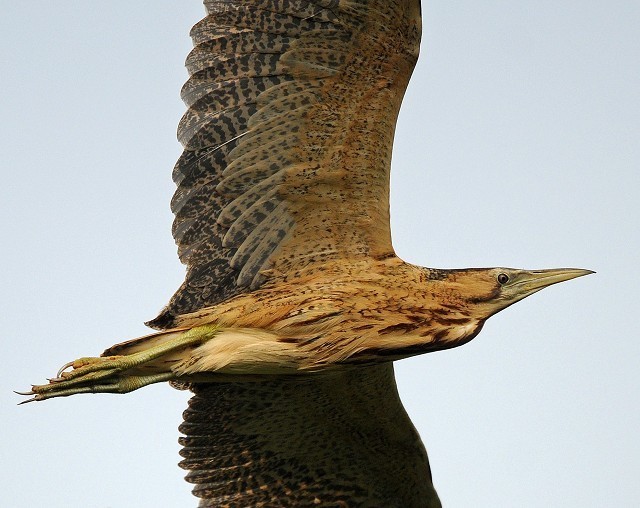 This article is a summary of the report of the Bittern Monitoring Programme in 2010. The Bittern population in the UK has been surveyed annually since 1990. The main aims of the survey are to:

The accuracy and standardisation of the annual survey is extremely important. Major wetland habitat creation, restoration and management are ongoing for this species and annual population monitoring is the main indicator with which we can measure its success.

The essential information collected during the monitoring of booming male Bitterns are:

Only those males that are known to have boomed for a week or more are included in the minimum figures for the year. Where a site or area holds, or is thought to hold, more than one boomer, it is important to confirm the number of boomers actually involved. This can be achieved by hearing different boomers at the same time, and by comparing the booming periods of each male to confirm that they overlap.

A maximum figure for booming males is also presented, which includes the records of other males that either boomed for less than a week or could not be confirmed as definitely different birds to adjacent boomers. However, the minimum figures are those that are published and used, as they are the most reliable and are comparable with the published figures from previous years. 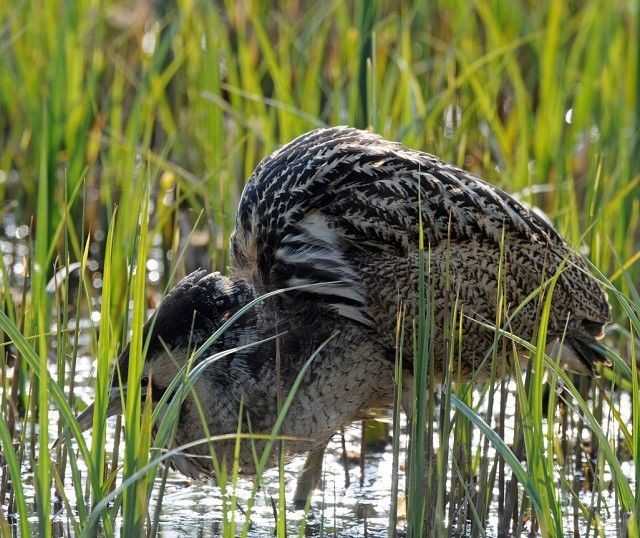 No attempts are made to visit active Bittern nests but, through long watches looking for regular female feeding flights, nests are identified and their approximate locations established. The nesting figures quoted, therefore, are for nests where females are feeding young. The current methods for recording active nests have been followed since 2001, so the figures before then are not directly comparable, although the earlier methods used were similar. 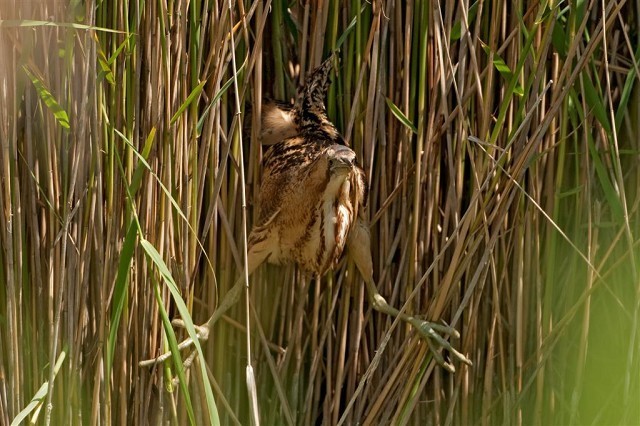 Several sites adjacent to, or near, sites with booming male territories were also watched for nesting activity. As in previous years, a large amount of effort and time was put into this monitoring. In line with the booming totals, there are two figures quoted: minimum (which only includes Confirmed nesting attempts) and maximum (which includes both Confirmed and Probable nesting attempts).

The 2009/10 winter was the coldest in the UK since 1978/79. From mid-December, cold weather dominated much of the country, with spells of snow and very low temperatures. It is likely that the freezing conditions affected the condition of wintering Bitterns, as they struggled to find food. Birds were reported in some strange places as they left their typical wintering sites to search for food. A request for supplementary feeding of Bitterns was distributed in early January and was undertaken at a number of sites across the country. The cold winter was then followed by one of the driest springs in recent years, at least in East Anglia, resulting in low water levels at some sites, especially in the Norfolk Broads.

Despite the harsh winter, there was a further increase in the number of booming Bitterns this year. A minimum of 87 booming males was confirmed, all in England, an increase of 6% on the 2009 figure of 82 boomers. The number of sites supporting at least one booming male in 2010 increased to 47, up from 43 sites in 2009.

Although the number of sites supporting nesting female Bitterns dropped by one in 2010, to 17, there was an increase in the number of confirmed nests, with 41 nests recorded at these 17 sites.

The earliest reports of booming this year were from the Somerset Levels, with the first record on 11th February, at Ham Wall. Across most sites, first reports of booming were generally later than in recent years and in many cases booming was weaker than usual throughout the booming period, probably due to the harsh winter conditions. Grunting was first heard on the Suffolk coast on 6th March, compared to 14th February in 2009, and some five weeks later than in 2008.

Booming was confirmed this year at new sites in Cambridgeshire, Kent, North Yorkshire and Somerset, although no booming was heard at the new sites in 2009 in Greater Manchester, Nottinghamshire, Essex or Wales.

A summary of the minimum national booming figures is shown in Figure 1, including details on the number of sites. 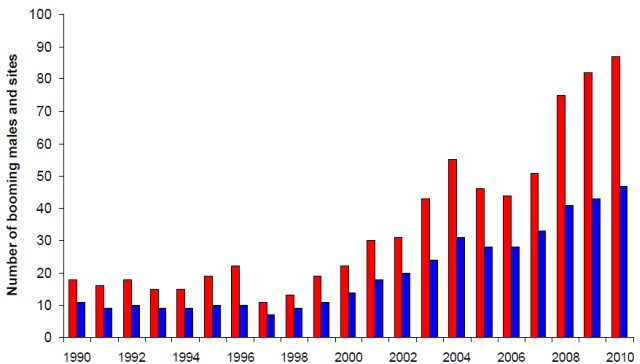 Figure 1. The minimum number of booming male Bitterns (in red) in the UK and the number of occupied sites (in blue) between 1990 and 2010. (Graphic: RSPB)

On the Suffolk coast, there were 26 booming males on seven sites, a slight decline of two from last year's record number. The largest drop at the site level was at Walberswick, which held five boomers this year, compared to eight in 2009. There were also slight declines at Minsmere and North Warren, both down one from 2009.

The number of boomers increased in the Fens, with 14 recorded, compared to 12 in 2009. Nine sites held boomers, including three sites where booming was confirmed for the first time. Lakenheath held six boomers this year, an increase of two since 2009. 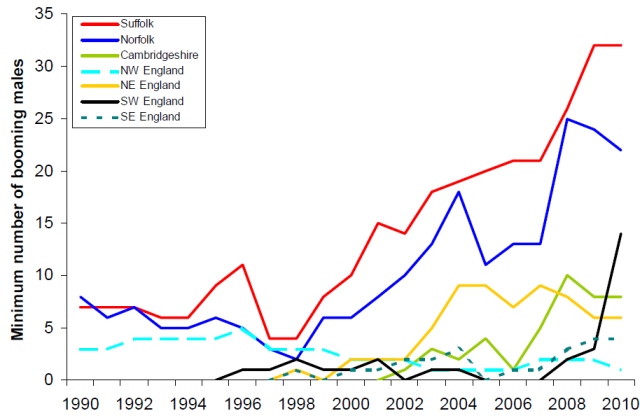 Figure 2.The minimum number of booming male Bitterns within key counties and regions in England, between 1990 and 2010. (Graphic: RSPB)

Nesting activity was confirmed at only 17 sites in 2010, despite the increase in the number of sites with booming. However, the number of confirmed nests increased to 41, and this is the first time that over 40 nests have been confirmed since the annual monitoring programme began. Figure 3 and Table 3 summarise the numbers of active nests nationally. The maximum figures are also quoted in Table 3 as a guide, but the following text refers to the minimum figures only. 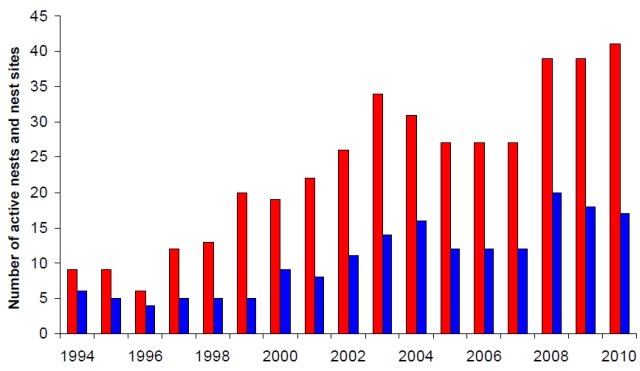 Figure 3. The minimum number of active nests where feeding flights were observed (in red) and the number of sites with nests (in blue), in the UK between 1994 and 2010. (Graphic: RSPB) 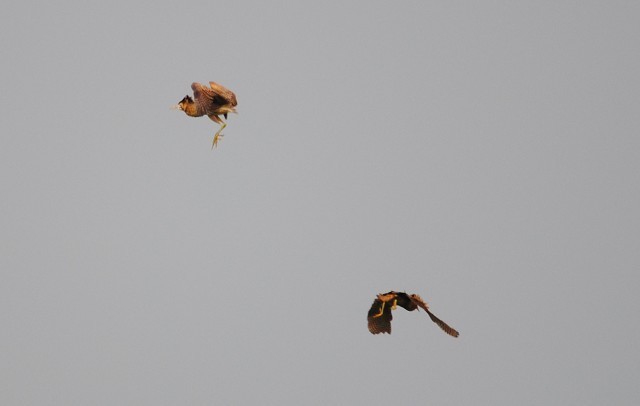 Six nests were confirmed in the Broads this year, one down on last year, but five down on the 11 nests found in 2008. Two nests were confirmed at Strumpshaw Fen, the first time that nesting has been confirmed here since 2004 and the first time that two nests have been recorded during the annual monitoring programme. Nesting was confirmed at only four sites in the Broads this year, compared to eight sites in 2008. As in 2009, many sites in the Broads appeared to be very dry throughout the breeding season. There were two confirmed nests on the North Norfolk coast, at two sites.

Six nests were recorded in the Fens this year, at two sites. Five nests were confirmed at Lakenheath Fen, which is becoming increasingly important for nesting Bitterns in East Anglia. The sixth nest was confirmed at a new site in the Cambridgeshire Fens. There was only one active nest on the Humber this year, but there was no confirmed breeding recorded at Leighton Moss for the first time since 1997. Nesting occurred in southeast England for the first time since the annual monitoring of Bitterns began in 1990, at Dungeness. 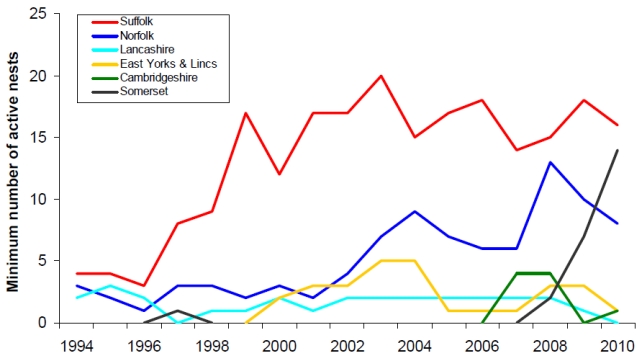 It is encouraging that there has been another increase in the number of boomers and nests this year, despite the prolonged freezing conditions over the 2009/10 winter. This continued growth has been largely facilitated by the expanding population of Bitterns in the Avalon Marshes in Somerset and, to a lesser extent, in the Fens. These are two areas where extensive reedbed restoration and creation has been undertaken since the mid-1990s. However, it should be noted that there have been decreases in the numbers of Bitterns in other key areas, such as the Suffolk coast and the Norfolk Broads.

Finally, it is interesting to look at the sites where Bitterns have been recorded during the past winter and compare this to where booming and nesting has been confirmed in 2010. 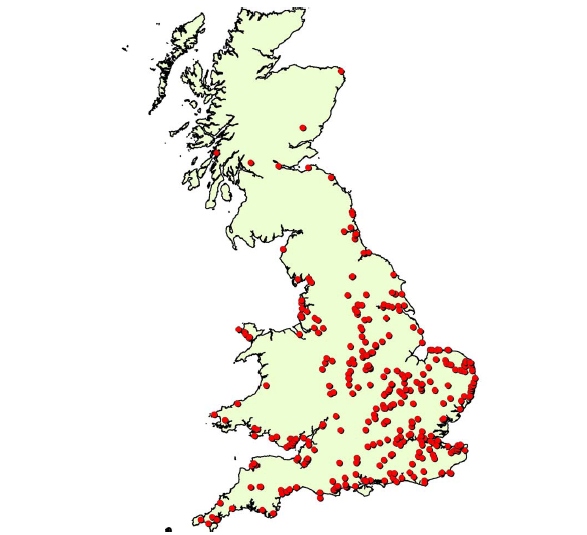 Figure 5. The locations of sites where Bitterns were recorded between October 2009 and March 2010 in Britain. (Graphic: RSPB)

Most of these site records were obtained from BirdGuides or BirdTrack. Although not a complete picture, Figure 5 does show how widespread wintering Bitterns are in Britain. Many of these wintering birds are migrants from Scandinavia or the Baltic states. It is probably true to say that, in many places, Bitterns were much easier to see during the prolonged cold spell in December 2009 and January 2010, when they were searching for food in the frozen conditions. Even so, birds were seen at some sites well away from their typical wintering habitats; typical numbers were recorded from many regular wintering sites. 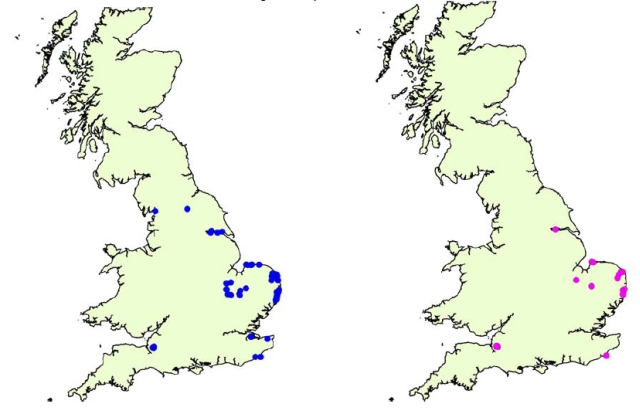 The long-term survival of Bitterns in the UK does depend on establishing sustainable breeding populations away from the vulnerable coastal populations in East Anglia, and into areas of the country that do support regular wintering birds. 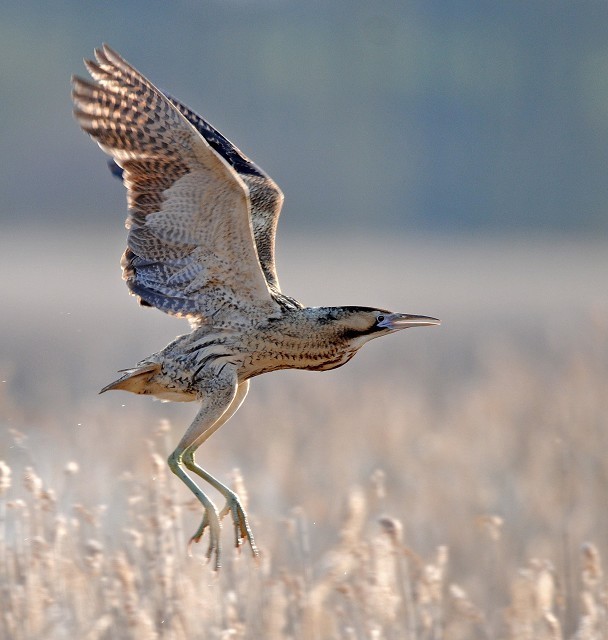 The Bittern Monitoring Programme will continue in 2011, as a joint project between Natural England and RSPB. As usual, the aim will be for RSPB field staff to start to monitor booming Bitterns from early March, and the field staff will be contacting landowners, site managers and other contacts from February onwards. With active reedbed management and creation throughout the UK, and an expanding Bittern population, we are increasingly reliant on landowners, site managers, wardens and local birders to report booming to us. Please keep an ear out for them next spring, even at sites where they have not been heard for many years. To report an observation or for more information on the survey methods, please contact Simon Wotton using the contact details below.

We wish to thank everyone who has helped us in monitoring Bitterns in the UK: site managers, landowners, wardens, volunteers, county recorders and local birders for their reporting of boomers and in many cases following up reports of birds. Particular thanks go to the landowners and site managers who have allowed access to sites for monitoring and to all those who have monitored sites and have helped with co-ordinated watches, including volunteers and staff at a number of reserves across the country. Thanks go to Graham Catley for generously allowing the use of his photographs in this report, Mark Grantham for providing details of 2009/10 winter BirdGuides records, and Nick Moran for providing the winter 2009/10 records from the BTO/RSPB/BWI/SOC BirdTrack scheme. The Bittern Monitoring Programme is funded through Action for Birds in England, a conservation partnership between Natural England and the RSPB, and organised by the Species Monitoring & Research section of the RSPB Conservation Science Department.