New figures from the Wildfowl and Wetlands Trust (WWT) reveal that Britain's smallest and rarest swan species has suffered an alarming crash in numbers. More than a third of the Bewick's Swans that winter in Europe have disappeared since 1995, when total population peaked at 29,000 individuals. The latest WWT figures show that by 2010 there were just 18,000 left. WWT scientists fear that the next census, due this winter, will reveal a further, more worrying decline.

The WWT started studying Bewick's Swan exactly 50 years ago, when artist and naturalist Sir Peter Scott first recorded the facial markings of the birds in the flock that roosted at the organisation's Slimbridge, Gloucestershire, headquarters. Today Bewick's Swan is one of the most intensively studied species in the world, and the WWT has recorded the lives of nearly 10,000 individual swans in detail.

The WWT has expanded its swan research over the decades and linked up with researchers throughout the migratory swans' range in northern Europe and Russia. Together, they have managed to get international protection for a chain of wetlands across the routes that are vital for the swans to feed and rest. Despite protection for their wetland habitats, the swan population has gone into decline. The WWT is currently raising money through its Hope For Swans appeal in order to deliver the Bewick's Swan International Action Plan, which aims to stabilise the population. 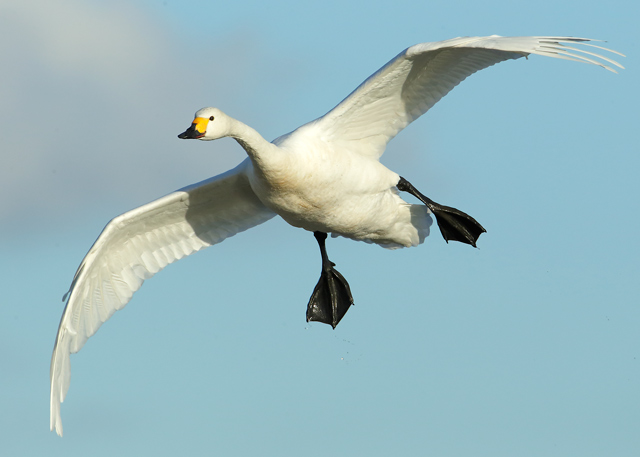 WWT Head of UK Waterbird Conservation Eileen Rees said: "At this time each year, the Bewick's Swan flocks start to return to Britain's wetlands from their arctic breeding grounds. However, recently they have been returning with [less immature birds] and the numbers indicate that they aren't producing enough offspring to replace all the swans that have died over the year.

"We have two possible solutions: to find out and address what's hampering breeding, and to reduce the number of preventable deaths along their migration route. We have a plan in place to do both and much work is underway already, but we need to do more if we're to change the fortune of our wildest and most beautiful swan."

The international swan census and action plan are both coordinated by the Wetlands International/IUCN Swan Specialist Group. WWT is the current chair of this partnership, which is tasked with investigating and addressing the reasons for Bewick's Swan's rapid decline.

Threats facing the species include:

Bewick's Swans reach maturity at four years old. When breeding successfully (and less than 50 per cent of the population attempts to breed each summer), each pair produces just one or two young. Every adult swan that dies a preventable death is an unnecessary and significant blow to the species as a whole. The swans' breeding grounds are remote and inhospitable, and finding out what is affecting breeding is the biggest challenge to their conservation. Climate change might be throwing the breeding swans out of synch with their food supply, or they may arrive from migration unfit to breed because of land changes or competition with other species along their route. Understanding the underlying problems is critical to taking action to boost breeding success.

For more information on swans, how to support their conservation and where to see then in the UK, visit www.wwt.org.uk/swans.