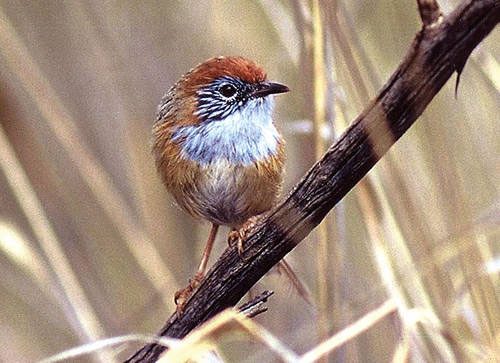 Mallee Emuwren: The range of Australia's Mallee Emuwren Stipiturus mallee has declined by up to 95% since the 1990s, mainly due to habitat loss (photo: Rob Drummond).

Confined to inland South Australia and Victoria, the emuwren is dependent on significant areas of Triodia — commonly called spinifex or Porcupine grass because of its needle-like "leaves" — that has been unburned for around two decades. But years of drought, particularly in the southern and western parts of the emuwren's range, have affected the health of the spinifex and almost led to the emuwren's extinction in South Australia where the last significant population comprises 100 birds confined to 100 km² of Ngarkat Conservation Park, down from thousands of individuals spread over 2,000 km² in the early to mid-1990s — a 95% reduction in area occupied.

"The Mallee Emuwren's habitat is now so fragmented that even small fires can have catastrophic consequences." — Dr David Paton, University of Adelaide.

The species' core population is now found in two key areas in Victoria: Murray Sunset National Park and Hattah Kulkyne National Park and adjacent Crown land, and the total population could be around 3,000 birds. Currently Mallee Emuwren is classified as Vulnerable but is likely to be listed as Endangered in the near future.

"We know from studies of the closely related Southern Emuwren (S. malachurus) that birds are unlikely to disperse more than five kilometres, which effectively means we are dealing with isolated subpopulations," says Dr David Paton from the University of Adelaide. "The Mallee Emuwren's habitat is now so fragmented that even small fires can have catastrophic consequences."

Even within Hattah Kulkyne and adjacent Crown land at Nowingi, fragmentation may be significant: the area is bisected by the Calder Highway, a railway line and a swathe of habitat removed beneath power lines. There are plans for an industrial toxic waste facility at Nowingi and the Mildura Fire plan proposes to burn a 250-metre-wide strip down the west side of the Calder Highway.