A 'century' of Rutland Ospreys

The Rutland Osprey Project has celebrated a major milestone as the 100th Osprey chick to fledge from a nest in the reservoir area did so this week.

The youngster is one of 15 chicks to fledge from eight nests this summer, a record-breaking total for the project. The fledging of a 100th chick is the latest landmark for a project that has successfully restored a population of Ospreys to central England for the first time in over 150 years.

The project started in 1996 and, between then and 2001, 64 Scottish Ospreys were released at the reservoir. The first translocated bird returned to breed at Rutland Water in 2001 and the number of breeding pairs has slowly increased since then. 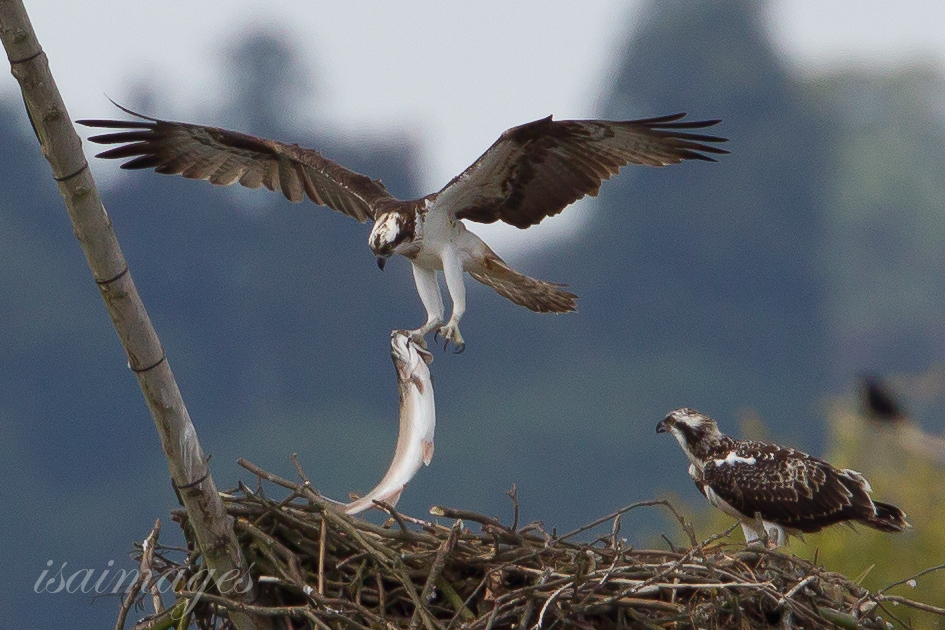 Adult and juvenile Ospreys at the nest at Rutland Water in 2012 (Photo: Ian Appleton)

Rutland Water Nature Reserve Manager, Tim Appleton, said: "Our long-term aim was to restore a self-sustaining population of Ospreys to central England, and the fact that the 100th chick has fledged shows that it is working well. Several of this year's breeding birds are second or third generation Rutland Ospreys which proves that we now have a well-established population."

Three of this year's chicks have fledged from a nest at Rutland Water Nature Reserve, where visitors have the opportunity to enjoy close-up views from a purpose-built hide. Live images from the nest are relayed to the hide as well as to the Lyndon Visitor Centre and onto the project's popular website.

Tim Mackrill, who manages the project, said: "It is always a thrilling moment to see a young Osprey make its first flight and this year the high definition cameras that we have on the nest gave us an incredible view as the young ospreys took to the air for the first time. Both the visitor centre and hide were buzzing with excitement when the chicks left the nest."

This year's Osprey chicks are likely to remain in Rutland until early September when they will set-off on a 3,000 mile migration to West Africa. If they survive the epic journey, the young birds will remain in Africa until they are two years old.

Tim Mackrill added: "Of the Rutland-fledged birds that are old enough to have returned, 40 % have made it back. Most have returned to the Rutland area, but two have bred successfully in Wales; helping to re-establish Ospreys there for the first time in over 400 years. In the years to come we hope that the Rutland birds will spread to other parts of the southern part of the UK and, with this in mind, we're working with land-owners and other conservation organisations to encourage a programme of artificial nest building. One day we hope that people walking along the River Thames will be able to look up and see an Osprey. That would be a real sign of success!"