Unlawfully shot, trapped or poisoned: a shocking 25 million birds are killed in the Mediterranean region every year, according to a scientific review carried out by BirdLife International.

The report also identified the species that are worst affected, with that familiar garden bird Chaffinch topping the ‘kill list’ with an estimated 2.9 million individuals taken every year. This is followed by Blackcap (1.8 million), Common Quail (1.6 million) and Song Thrush (1.2 million). This last species is a Red Listed Species of Conservation of Concern in Britain, while Common Quail is Amber listed, both due to population declines.

The paper also exposes some of the methods of killing used across the region, including illegal shooting, mistnets and limesticks. Hunters also use birdsong recordings to lure different species to trapping locations.

A number of European countries show a high rate of illegal killings. Italy is second only to Egypt, with an estimated 5.6 million birds slaughtered every year. The number of birds killed in Greece tops 700,000, with the country being in the top worst three for illegal killing of European Turtle Dove, a species that has declined by 78 per cent in Europe since 1980. In France, an estimated 522,000 birds are illegally killed each year, with trapping the predominant form of killing.

Tim Stowe, RSPB International Director, said: “The illegal killing of tens of millions of birds around the Mediterranean, highlighted in this report, is a source of lasting shame. It’s time that action is taken to put an end to the killing, especially in the European Union where nature laws should be protecting vulnerable species. If properly implemented and enforced, the EU Birds Directive would provide the necessary protection for a number of birds that feature in this report, and in time reduce the needless illegal killing.

“We have seen positive steps taken this year to reduce the rate of illegal killing of birds, in places such as the Dhekelia British Sovereign Base Area, Cyprus. Now we need to put pressure on the rest of the EU to follow this example to ensure safer flyways for birds migrating between continents.” 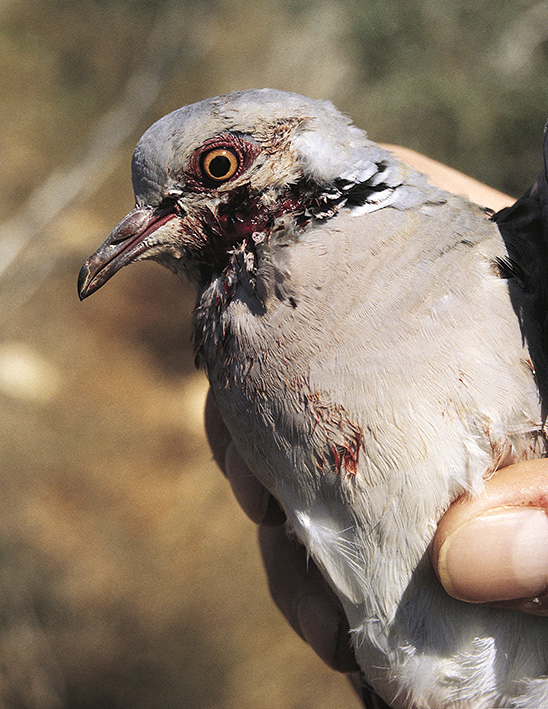 The use of mistnets is legal; however, they have to be set up properly to ensure
the birds' welfare. Improperly used mistnets can cause horrific
injuries, as shown on this European Turtle Dove.
Photo by Guy Shorrock (www.rspb-images.com).
Content continues after advertisements
Written by: Birdwatch news team
Login to leave a comment
Return to List