Winter holiday to the Med?

Lesser Black-backed Gulls breed widely across northwest Europe, at sites ranging from offshore islands to city rooftops, where their raucous call and fondness of takeaways make them a controversial resident. This species has been extensively studied over several decades. We know from ringing data and surveys (e.g. the BTO's Winter Gull Survey) that UK-breeding Lesser Black-backed Gulls typically migrate to southwest Europe and northwest Africa, but numbers overwintering in the UK have increased in recent decades. This is partly due to UK breeders choosing not to migrate (perhaps because of milder winters and food availability at landfill sites), but also a seasonal influx of birds from Scandinavia. We appreciated, therefore, that Lesser Black-backed Gull migration was complex, but were nevertheless surprised and delighted by the first results of an ongoing project, showing individual gulls' migratory movements in unprecedented detail.

The secret of this project lies in the technology. In 2010 and 2011, we deployed state-of-the-art solar-powered GPS tags on Lesser Black- backed Gulls breeding at Orford Ness on the Suffolk coast. The tags were manufactured at the University of Amsterdam, where researchers have made them available for a range of species, including Lesser Black-backed Gulls breeding elsewhere in Europe. Provided gulls are within a few kilometres of a mast, information from these tags can be downloaded remotely, giving details of an individual's movements, altitude and acceleration. These tags were originally fitted to study how gulls interacted with offshore wind farms but, after months out of range, we were amazed to discover the winter activities of gulls tagged in 2010 when they returned for breeding in spring 2011. 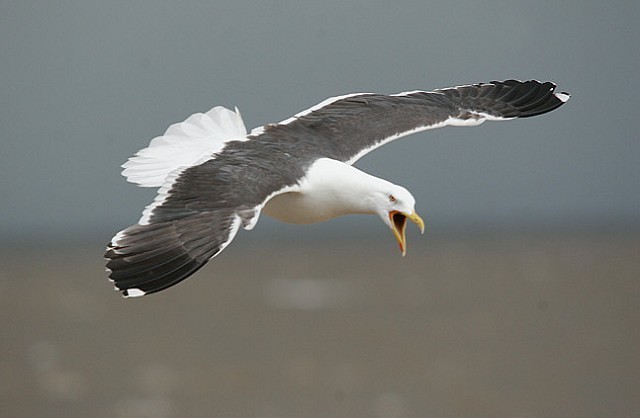 One of the most striking aspects of these birds' non-breeding movements was how varied they were. There was a three-month window between the first bird leaving Orford Ness in July 2010 and the final departure in October. All tagged birds went overseas for the winter but again dates varied, with birds leaving our shores between late July and late November 2010. Indeed, the departure of the last birds appeared to coincide with the onset of cold weather, leading us to speculate that these individuals might have stayed had the winter been warmer.

Once the birds left the UK, we were struck by how all but one flew straight across the Bay of Biscay, barely stopping at night. Birds then hugged the western coasts of Spain and Portugal on their way to Africa. All our birds went as far south as Morocco but the distance travelled differed widely, from about 3,000 km to nearly 10,000 km. This was largely because some individuals chose to stop for considerable periods along the way. Popular staging areas included beaches favoured by gull colour-ring readers in Galicia. This variation in distance travelled and staging behaviour is reflected in the timings of the outward leg of the journey, which took between 15 and 155 days. 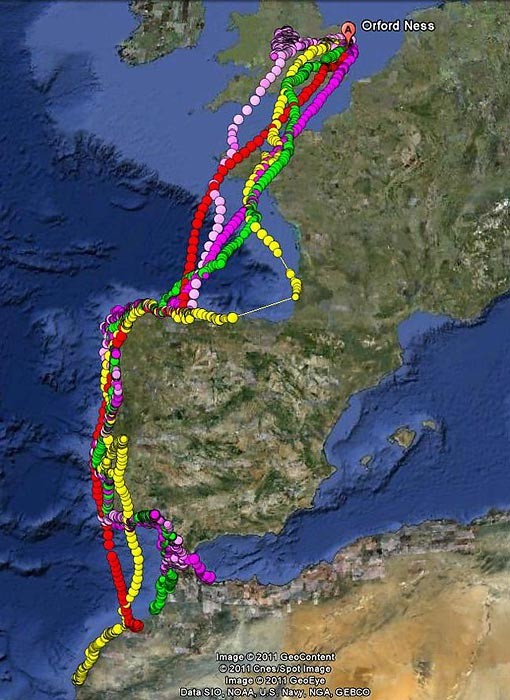 As the birds headed south; all except one flew straight across the Bay of Biscay before hugging the coast of Spain and Portugal on their way towards Africa.

There was further variation in the gulls' behaviour on their wintering grounds. While some individuals remained centred on the same place, others wandered extensively, covering distances of between 1,450 km and almost 12,000 km.

The timing of the gulls' return journeys was far less variable than that of their outward trips. All birds turned north between 3rd March and 1st April 2011 and arrived back at Orford Ness between 20th March and 12th April. Their return journeys were therefore much faster than their outward ones, with every bird covering the distance in 11 to 17 days; it seemed that once they had decided to return, they were determined to get back as quickly as possible and hardly stopped. Consequently, at between approximately 2,500 km and 3,500 km, the distance covered on the return journey was also far less variable than on their way south.

Despite this similarity in homeward timings, there was a striking difference in the routes gulls selected, compared both to each other and to their own outward journeys. While gulls chose relatively consistent paths on the way out, some birds took a very different return route.

By late August 2011, our tagged birds had again left Orford Ness. We are now eagerly awaiting their return in spring 2012. We hope to gain further information for the birds tagged in 2010, along with new data for the birds tagged in 2011. Through investigating the drivers behind Lesser Black-backed Gulls' flexible migratory strategies and decisions, we could gain further insights into the conservation needs of this charismatic and declining species.

This article is taken from BTO News, the BTO member's magazine. To find out more and to see further examples of recent articles featured in BTO News, visit the BTO website.

This worked was funded by the Department of Energy and Climate Change. The author wishes to thank Mike Marsh, Gill Stannard & David Crawshaw of Landguard Bird Observatory and The National Trust at Orford Ness.