Though widely distributed throughout sub-Saharan Africa and Central and Southern Asia, the range of Shikra (Accipter badius) barely extends into the Western Palearctic (WP) and as such it is one of the region's scarcest and most localised species. It is also probably one of the least-known breeding species in the WP — many keener and well-travelled birders do not realise that it maintains a small foothold in the far east of the region, this in itself only properly discovered in the past decade.

Shikra is one of three small Accipiter species to occur within the WP, the others being the familiar Eurasian Sparrowhawk and the less readily encountered Levant Sparrowhawk. Those Shikras that occur within the region are of the northern subspecies cenchroides which, when seen well, should provide few identification pitfalls. However, each of the three small Accipiters can show a superficial resemblance to the others, which can make identification tricky if views are less than ideal.

At first glance, adult cenchroides Shikra looks quite similar to adult Levant Sparrowhawk, though in flight the wings appear shorter, broader and more rounded than in the latter species (the secondaries appear to 'bulge', reminiscent of Northern Goshawk), with five distinct primary fingers visible on a soaring bird compared to four in Levant. Shikra also lacks the distinct black tips to the outer primaries (and dark trailing edge to inner primaries) seen in Levant Sparrowhawk, and the upperparts are a shade paler. When seen well, Shikra clearly exhibits a pale iris — yellowish in females and a fiery orange-red in males — while Levant Sparrowhawk always shows a dark eye. Shikra is often quoted as showing a distinct dark gular stripe at all ages and sexes though in reality this can be quite indistinct on some adults, and without close views could easily appear absent. Equally, this is also shown by most Levant Sparrowhawks and is therefore not a defining feature. 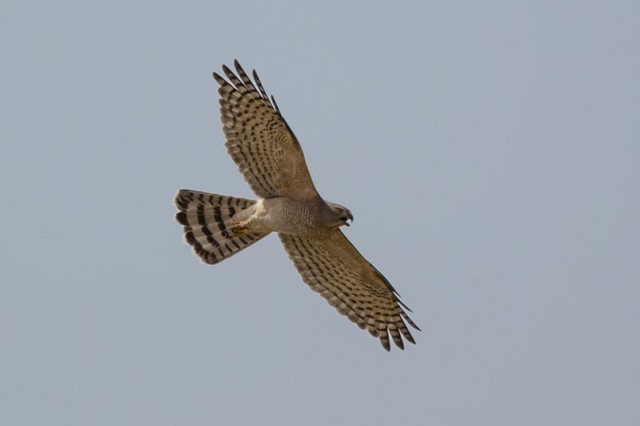 Shikra, Kuwait, 29 September 2015. On a soaring bird, the five obvious primary fingers and 'bulging' secondaries are very much apparent, while good views like this also reveal the pale iris and pale underparts. (Photo: AbdulRahman Al-Sirhan) 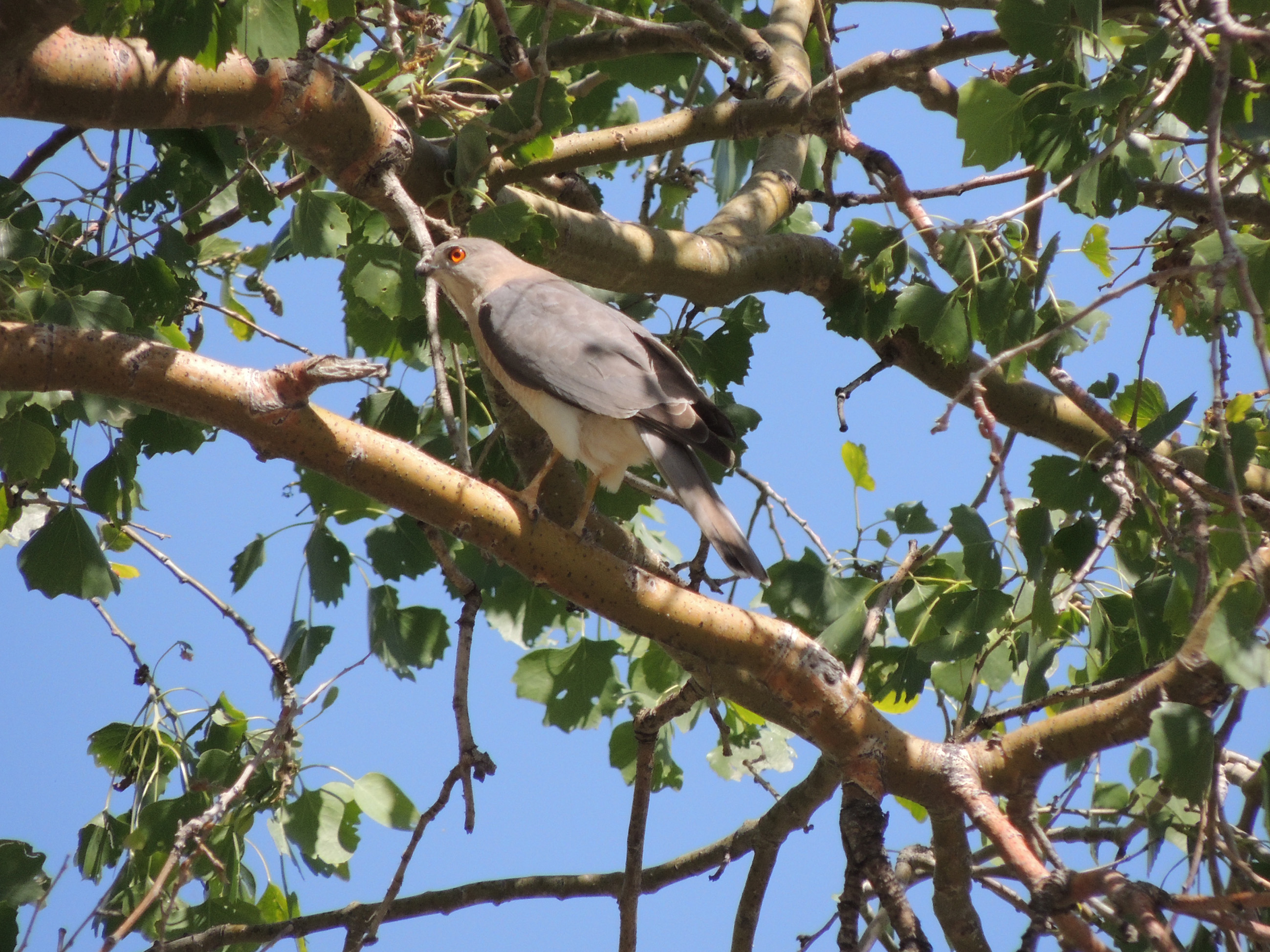 Shikra, Kazakhstan, 27 May 2013. The northern subspecies cenchroides breeds across much of northern Iran and eastwards in to southern Kazakhstan. Note how pallid grey the upperparts are. (Photo: Craig Morris)

The separation of juvenile Shikra and Levant Sparrowhawk is possible on a combination of flight profile/wing formula and iris colour (always dark in the latter), although other features are more variable and tend to overlap. The presence of a distinct gular stripe separates juvenile Shikra from Eurasian Sparrowhawk, which never shows this feature, and the latter species also typically shows six distinct primary fingers when soaring (compared to Shikra's five).

A more in-depth analysis of Iranian Shikra identification, including juveniles, is available here.

Breeding Shikra in the Western Palearctic

According to Birds of the Western Palearctic (Cramp & Simmons 1977), the WP boundary straddles the Azerbaijan–Iran border. Widespread throughout northern Iran, the range of cenchroides Shikra just about extends westwards in to the coastal lowlands of southernmost Azerbaijan, and therefore the WP.

It is therefore southern Azerbaijan that offers the most reliable and straightforward opportunity to see the species in the WP, and indeed the only opportunity in the summer months. Following a record of three birds obtained, including one at the nest, near Lankaran in 1933 and another shot in the same area in 1953, it was only in May 2007 that a breeding pair were observed in the country, this quickly followed by confirmed breeding in south-east Azerbaijan in 2008 (Heiss & Gauger 2009). In recent years the species has become well-known in the Masalli area. The close proximity of these records and the apparent presence of a significant population suggests that the species has almost certainly always maintained a presence in the area, rather than be an intermittent visitor.

Furthermore, the species was discovered breeding in Armenia in 2009, when two pairs were found in parks around Yerevan (Ananian et al 2010). Here, at 1,000–1,300m asl, birds were nesting in large poplars.

As in northern Iran, Shikra is a migrant breeding visitor to Azerbaijan and Armenia, probably arriving back on breeding grounds in the second half of April and departing south again in September and early October. The end of April and May is therefore presumably the best time to observe the species as the adults display and general activity is high. Around Masalli, it is essentially guaranteed to be found around the stands of deciduous (primarily oak) trees around the town and along the main roads in the area. A particular hot-spot for sightings in recent years is the area around the Olympic Complex on the south side of town (39.021, 48.697), where any vigil at a suitable vantage point over the oak plantations should produce sightings.

I visited the Masalli area during a spring trip to Azerbaijan in May 2015. On 7th we saw at least three Shikras over the clearing north of the Olympic Complex, viewed from 39.0227, 48.6975, as well as having fantastic views of an adult perched in an oak at 39.025, 48.700. A further bird was seen over the main road at 39.012, 48.706. All these sightings came within just a few hours of searching, a lot of which was in the heat of the day, leaving the impression that the species must be fairly numerous in the immediate area and therefore not difficult to find, even accounting for multiple sightings of the same bird(s). It is worth noting that both Eurasian and Levant Sparrowhawks also occur in the Masalli area (and throughout Azerbaijan); the latter especially may be an identification pitfall in May and care must therefore be taken when examining any small Accipiter encountered — not all will be Shikras! 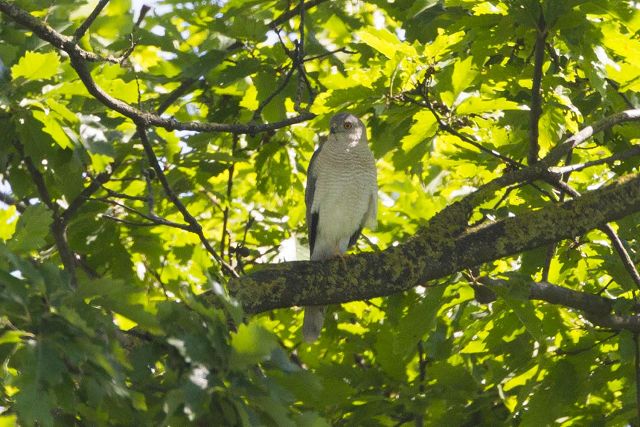 Similar habitat, consisting of open fields and scattered stands of oak trees, can be found intermittently throughout southern Azerbaijan, although habitat rapidly diminishes to largely treeless semi-desert further north. This, coupled with sightings of breeding Shikras as far south as Astara, on the Iranian border, suggests that the species it is probably quite widespread and not uncommon throughout similar habitat across the coastal lowlands in the south of the country. Indeed, Heiss & Gauger (2009) estimated that there were 50–150 pairs in southern Azerbaijan. 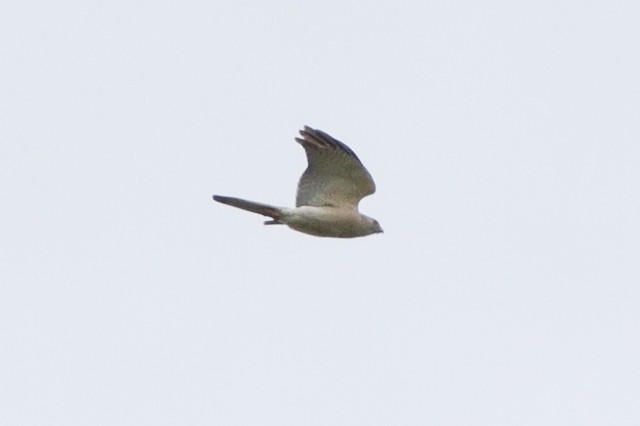 Shikra, Masalli, Azerbaijan, 7 May 2015. A heavily cropped record shot of a bird rapidly crossing a clearing, but the five long primary fingers are apparent and the lower body is extensively pale. (Photo: Josh Jones)

It is worth noting that, across its range, Shikra is far from a habitat specialist — it thrives in a range of enivronments as diverse as forests, farmland and even urban areas. This, coupled with the observations above 1,000m asl in Armenia, suggests that the species may not necessarily be restricted to the coastal lowlands in Azerbaijan, and further research may well prove that it is more numerous and widespread than initially thought.

Rather confirming its status as a peripheral WP species, Shikra is also extremely range-restricted outside the breeding season and is only seen with any regularity in Kuwait. Here it is considered a scarce passage migrant and winter visitor, and a winter trip to the country should produce sightings. Two of the best sites in recent years have been the Jahra Farms area (29.351, 47.674) and Al Abraq, although birds may realistically be encountered anywhere in suitable habitat and it is well worth following the Birds of Kuwait sightings blog for the latest news. Note that Eurasian Sparrowhawk is a much commoner winter visitor to Kuwait, and most Accipiter sightings will relate to this species.

Elsewhere in the WP the species is a rare vagrant, with two Israeli records (1987 and 2005) and one from Turkey (in early September 2006 at Hopa on the Black Sea coast, where another was reportedly trapped by hunters many years previously).