Wallcreepers can be difficult birds to find. Even if you know a good site for this species, it is often in a remote location, requiring lots of walking and, when you get there you are confronted with one or more vertical cliff faces on which you have to find a bird the size of a sparrow which rarely gives itself away by its call. There's a phrase about needles and haystacks that often comes to mind in these situations. Many a time I've been to a Wallcreeper site and come away with nothing more than a cricked neck. But if they were easy they wouldn't be so exciting. It's the pain that makes the gain so much more rewarding.

However, to avoid you going through some of the pain I've had before, I'd like to pass on two secrets that I've just discovered that can help anyone to find Wallcreepers. 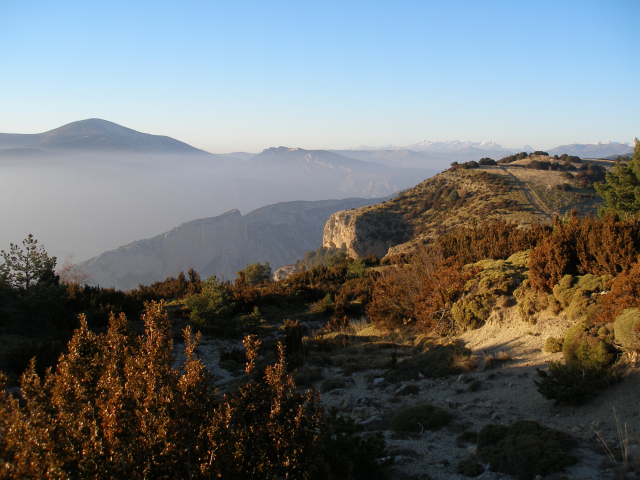 The Sierra de Guara, northern Spain a beautiful area for a short winter birding break. We had Citril Finch at this spot. The snow-capped hills in the distance are in Ordesa National Park (photo: Liz Hall).

One such area is the Sierra de Guara in northern Spain, just to the south of the famous Ordesa National Park. I went there last November for just a few days and managed to find Wallcreepers at four different sites. A more detailed description of where I found them will be published a future article but for now I'd just like to extol the virtues of this excellent area.

My first eye-opener was how cheap it was to get there - I took advantage of one of those '1p each way' flights from Stansted to Zaragoza so (even with added supplements) it was cheaper than getting to, say, Norfolk. The next surprise was the weather; glorious sunshine every day with no need for hats, gloves or even coats except at dawn and dusk. And some of the birding was very special indeed. 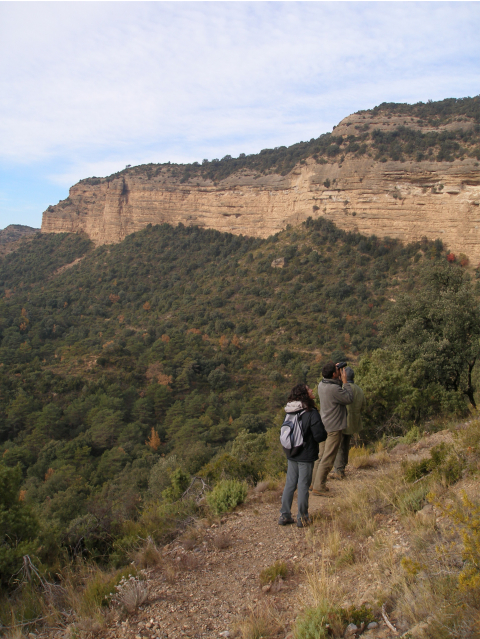 El Huevo de Morrano, Sierra de Guara one of many sites in the area for wintering Wallcreeper (photo: Liz Hall).

Within an easy drive of our hotel in Bierge (Hosteria de Guara - highly recommended) we not only had a choice of six Wallcreeper sites to visit we also had access to no less than three feeding stations where carcases are put out specially for vultures. In fact one of these was within sight of our hotel. In these days of mad cow's disease, farmers are obliged by law to clear up any dead animals on their land so there is a real shortage of 'wild' food for vultures. Therefore, to prevent a crash in the vulture populations, special feeding sites have been created. These have enabled the vultures to increase in number and, at the same time, provided new tourist attractions.

The commonest vultures are, of course, the Griffons; we saw about 100 at one station and more like 200 at another site. In such numbers it's easy to get blasé about Griffon Vultures but each one is about as awesome as any bird in Europe. Here you can get close enough to hear the throbbing of their wings as they flap and you can find vantage points where you can look down on them soaring below you. We were privileged to be able to join a park ranger as he put out 'fresh' food. For a few minutes there were no vultures around us and we thought they would wait until we had gone. Then one bird arrived and sat within sight of the food. It was joined by another, then another - three birds sitting and waiting, wondering whether to approach. Then, from nowhere, vultures filled the sky, all heading at speed in our direction, wave after wave of descending hordes, like Brian Blessed's winged warriors in Flash Gordon. There was nowhere near enough food to satisfy all these birds so a mad stampede ensued; a free-for-all; each bird for himself in a scramble to get at least some of the food. We were crouched about 30 metres away but the birds' lust for food was much greater than their fear of humans. In ten minutes the scramble was over and many of them departed in twos and threes but about 50 birds stayed behind, presumably needing to digest their feast. 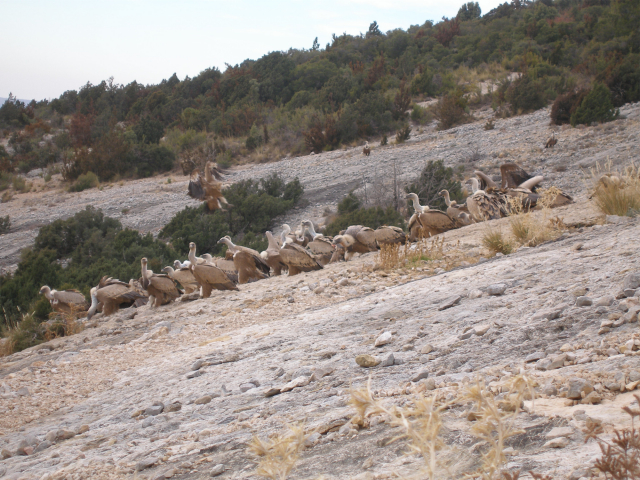 Griffon Vultures at a feeding station near Santa Cilia, Sierra de Guara photographed with only the most basic of digital cameras (photo: Liz Hall).

In summer, the Griffons would be joined by Egyptian Vultures but, this being November, the only other vulture to look for was the magnificent Lammergeier. We did see two young Lammergeiers here but they were in no rush to get to the food, even over the next couple of hours. In fact we didn't actually see a Lammergeier taking advantage of any of the three feeding stations we visited but I am assured that they do and can imagine that, even from the public observatorios, they would make fantastic viewing. Instead we had to content ourselves with several sightings of Lammergeiers sitting on distant hillsides or sailing effortlessly from peak to peak. Vultures aren't the only raptors here. We had several sightings of Kestrel, Sparrowhawk, Buzzard and Peregrine and the Golden Eagles we saw at three different sites gave some of the best views I've ever had of this species. The Red Kites are worth a special mention as there were crowds of them around one of the feeding stations, offering a great opportunity to photograph individuals that aren't daubed with plastic wing tags! But if you're really after raptors you should come in the summer when you can add Black Kite, Honey Buzzard, Short-toed Eagle and Booted Eagle to the list of expected birds. In summer though, the Wallcreepers would have disappeared back into the highest peaks, along with the Alpine Accentors and Citril Finches that we also saw on this brief visit.

So next time you're wondering where to go for a short birding break, don't forget that a trip like this can be just as affordable as one in the UK, the weather is likely to make a welcome change and you get to see some of the most spectacular birds in Europe.