The Shetlands are approximately 338km north of Aberdeen, 360km west of Bergen, Norway, and 1123km south of Reykjavik. They are positioned on the same latitude as the southern tip of Greenland, and it really does feel like you are no longer in the United Kingdom, but that you've strayed into the Arctic Circle or Scandinavia. The treeless countryside, intercepted with hundreds of lochs and vast, expansive rolling moorland really do create a unique habitat, right at the northernmost point of the British Isles.

Such a unique habitat attracts many unique breeding birds, some of which have their UK stronghold on the islands. The geography and position of Shetland also makes it an ideal stopover point for thousands of migrants a year, including many rarities.

One of the main attractions during the breeding season is the many colonies of seabirds that frequent the cliffs and small offshore stacks. A good place to view one of the larger colonies is the RSPB reserve at Sumburgh Head, the southernmost point of the mainland. The site has thousands of breeding pairs of Guillemots, Razorbills and Fulmars, as well as breeding Puffins, Shags and Kittiwakes. Well-constructed viewpoints give excellent close-up views of the breeding Puffins and Razorbills in particular. Gannets, wandering from their breeding cliffs at Noss, can be seen passing close to the cliffs throughout the day, and in late summer a regular flock of Eider gathers to moult just offshore. Both Great Skua and Arctic Skuas patrol the cliff face looking for a Puffin or Guillemot to harass for its last meal. Loch of Spiggie, another RSPB reserve just north of Sumburgh, is another good spot to watch skuas as they bathe in the freshwater loch, and both species breed in the nearby hills around Fitful Head. Arctic Terns and Common Terns, which breed througout the islands, also join the skuas in using the Loch of Spiggie as a place to rest and bathe. 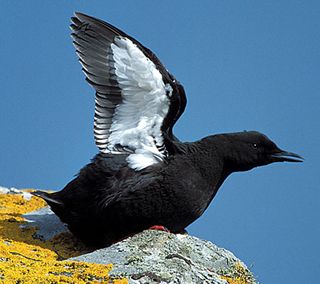 The small island of Mousa is also managed by the RSPB and can be reached by using the ferry service that runs from Sandwick, in the south of the mainland. A visit during the day is excellent for Black Guillemot, Arctic Tern and skuas, but a visit to the island at night reveals thousands of Storm Petrels that breed in the ancient Broch and its surrounding walls and boulder beach. Special boat services operate on Saturday and Wednesday nights; they leave around ten o'clock and return around half past midnight, giving plenty of time to watch the petrels returning from feeding out at sea.

Waders are another characteristic bird family that can be found throughout the islands. Any area of wet moorland and grassland will hold good numbers of Snipe, Curlew, Redshank, Lapwing, Oystercatcher, Dunlin and Golden Plover. Whimbrel have their British stronghold in the Shetlands, and can also be encountered almost anywhere where the habitat is suitable. Greenshanks are considerably rarer and if come across are best left undisturbed.

Something quite noticeable about the Shetland Isles is the absence of raptors. Kestrels, Common Buzzards and Hobbies are only rare passage migrants, whilst Hen Harriers and Honey Buzzards occasionally pass through in the spring or autumn. The only regular breeding raptor is the Merlin, which prefers the more extensive areas of moorland to breed. These small falcons have decreased alarmingly in the last few years and are only found at a few sites.

Wildfowl breed, but not in big numbers, their populations swelling during the winter months with winter visitors from the continent. Two species of wildfowl that have recently begun breeding in the Shetland are the Whooper Swan and Greylag Goose. It is thought that the Greylags that have colonised the islands are of Icelandic origin rather than Scottish, and can be seen feeding in the fields with shorter grass. Ducks also breed, Wigeon, Shoveler, Red-breasted Merganser, Pintail and Teal breed most years, but their numbers and distribution can be erratic.

Non-breeding Long-tailed Ducks, Great Northern Divers and Common Scoter often linger on throughout the summer and can be found anywhere along the coast. Red-throated Divers are a colourful addition to the birdlife, and are fairly common, taking advantage of any loch or small body of water to breed. As with the waders and skuas, divers can be encountered all over Mainland Shetland. Often a drive along the main A970 that runs the length of the island from north to south will reveal all species and it's best to stop and find your own area to explore. 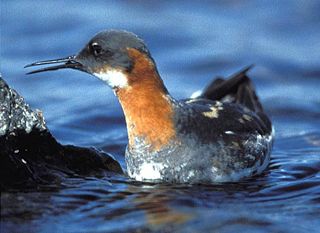 A similar selection of breeding birds can be found on Yell, Unst and Fetlar. These three islands can be visited by catching the ferries that run throughout the day from Toft, in the north of the Mainland. Fetlar does have its speciality in the shape of the Red-necked Phalaropes. These peculiar but fascinating birds have bred on Fetlar for many years, and with help from the RSPB have stabilised in numbers. The best place to watch this tame bird with minimal disturbance is at the renowned Loch of Funzie (pronounced Finney) reserve where up to 15 can be seen feeding at once. Fetlar was also once famous for its breeding Snowy Owls but sadly they are no longer regular visitors. There is also a small colony of Manx Shearwaters on the island, but its numbers have been reduced greatly from predation by feral cats.

The Shetlands are renowned as a migration hotspot. Species such as Bluethroat and Icterine Warbler are regular and commoner migrants arrive in huge numbers. Due to the open nature of the land, any small bush or shrub could harbour an interesting migrant. Some areas though do attract more than their fair share of migrants. The bushes around Quendale and the watermill are a good spot for small passerines. Already this year the area has produced Icterine Warbler, Common Rosefinch and Golden Oriole, and in the past Wryneck, Citrine Wagtail, Quail, Bluethroat and Little Bunting have all been found hiding in the bushes. Not far from Quendale are Spiggie Loch and Hillwell Loch. Earlier this year Spiggie played host to a long staying Great White Egret, whilst a Black Duck took up residence on the Loch of Hillwell. In the past, Green-winged Teal and American Wigeon have been observed, and Garganey are scare but annual each year.

Jutting right out into the sea, Sumburgh Head is another good place for migrants. The small bushes by the lighthouse often harbour rarer migrants and a Subalpine Warbler stayed a few days earlier in spring this year. It boasts an impressive list of vagrants, including Red-rumped Swallow, Richard's Pipit, Black-headed Bunting and Lapland Bunting, amongst others. Virkie Pool, beside the airport at Sumburgh, is an excellent area for rare waders, particularly in autumn. In the past Pectoral Sandpiper, White-rumped Sandpiper and Sharp-tailed Sandpiper have all been recorded. Geosetter is a small valley packed with bushes and shrubs and regularly holds large numbers of migrants, and is especially favoured by warblers. In 2000 alone, Barred Warbler, Greenish Warbler and Yellow-browed Warblers were all noted, as well as Wrynecks.

The above sites are favoured by many of the commoner migrants, such as Pied Flycatcher, Common Redstart, Whinchat and Lesser Whitethroat, but migrants can and do turn up anywhere on the island. Red-backed Shrikes are fairly regular, and it's always worth checking fence posts for them. Just recently a Rose-coloured Starling was at Hoswick whilst a Common Crane has been frequenting Fetlar for some time now.