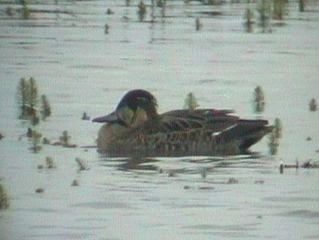 A drake Baikal Teal was identified at Minsmere RSPB reserve, Suffolk, on 18th November. Once it became clear that the bird was a 'pure' Baikal Teal and all potential hybrid features had been discounted, the pendulum of attention swung to the possible origin of the bird. Wildfowl must be the most contentious group of birds on the British list and records of potential vagrant ducks and geese always stimulate debate by birders and committees alike.

Baikal Teal has one of the most chequered histories on the British list, with its status swinging from Category A to Category D on a few occasions. It was placed in its current position in Category D in 1993 (birds are placed in Category D if there is reasonable doubt that they have ever occurred in Britain in a natural state; the category allows records to be 'saved' for future reference and reviewed should the need arise). The status and origins of records for this strikingly beautiful duck have been the subject of much discussion in Britain and Europe over the years.

Breeding across eastern Siberia, west to the Angara River and east to Kamchatka, the wintering area is in southern Korea, eastern and southern China and southern Japan. During recent times this range has contracted away from the west and it is now considered one of the rarest ducks in Asia. Records away from these areas are rare, with one record from central Thailand, and a handful of records from north-eastern India and Nepal with two records from Pakistan. There is also a recent record from the Aleutians. Formerly a common wintering bird of the Far East, huge numbers used to be seen in Japan, though by the early 1990s very few were seen in former strongholds and it was feared that a massive decline had taken place due to pressures from hunting and disturbance. The beauty of the drake with his striking face pattern and long flowing scapulars made it a popular species for wildfowl enthusiasts, and in the first half of this century thousands of birds were imported to Europe and North America – the future looked bleak and the prospects of natural vagrancy were considered extremely remote. In 1999 astounding news arrived from South Korea that two sites, Haenam and Cheonsu Bay, held a wintering population of 250-270,000 birds. Exciting news indeed, when you consider that the previous world population estimate was only 105,000 birds. This enigmatic bird had clearly made a comeback – or it had simply been forced once again to change its wintering grounds to an accessible area for ornithologists.

In Europe there were at least 65 records reported by Eldridge and Harrop (1992). Most of these were from France and Belgium, but records were also noted for Finland, Germany, Italy, Malta, Norway, Poland, Sweden, Spain and Switzerland. There were 11 listed from Britain and one from Ireland (though only two since 1970). Most national committees regard these birds as escapes. The distribution of occurrences peaked between November and January, then again in March and April and nearly all records have occurred since the early 1900s, correlating with the period that birds were imported into Europe. A party of 5 birds in France in 1836 occurred prior to known imports and are widely regarded as relating to genuine vagrants.

So, what of the credentials for the Minsmere bird? The bird has been reported as a 1st-winter drake, but an eclipse drake is extremely difficult to eliminate and opinion is divided over the correct age of the bird. It might be some time before it is resolved, if at all. Juveniles normally take until January of their second calendar year to moult into an adult-like plumage, whilst males are normally in eclipse plumage from July until October to December (Eldridge and Harrop, 1992). Correctly ageing the bird would be a key factor in determining whether it realistically stands a slim chance of being considered as a genuine vagrant. Is naming the bird as a 1st-winter perhaps 'wishful ageing' on the part of many?

The bird has turned up at Minsmere, Suffolk, a location well known for attracting rarities. Is this one of the main reasons for the 'excitement' over this particular individual? Would anyone have cared if it had turned up with a group of Teal on a small reservoir in the West Midlands? Probably not. The last British record of interest was a female or juvenile in Leicestershire in 1990 but that attracted hardly any attention from birders across the country (drakes in 1994 and 1998 attracted little interest - the last was a ringed bird of captive origin).

Baikal Teal move north to south/south-west to their wintering areas. For an immature bird to occur naturally in Western Europe this would involve an element of reverse migration and then abmigration. The probability of such events happening is often considered to be far outweighed by the likelihood of captive origin for many eastern Siberian vagrants. For this bird to have arrived naturally it would have to become mixed with a party of Teal or Wigeon moving into Western Europe and the probability of such an event taking place must perhaps be considered relatively small.

In the United Kingdom and Europe, Baikal Teals are relatively common birds in collections and they are apparently not difficult to breed in captivity, given that the requirements for successful breeding are becoming better understood. The capacity of captive ducks to move widely when they find freedom is aptly demonstrated by the humble Mandarin: two birds from Norway were shot the following day in Northumberland, one from London reached Hungary and a male ringed in Berkshire turned up in Russia – clearly not all wildfowl remain faithful to their local area once they begin associating with other ducks! Indeed, it is likely that liberated birds readily move with the carrier species with which they first become associated.

At the end of the day, a definitive decision on this bird from the relevant committees might take some time to materialise and, in any event, no decision is ever cast in stone. A short-term decision will probably place the bird in Category D, and this approach, at least, will enable a future review of all British (and European) Baikal Teals to take place, should it be required. On the plus side is the age of the bird, should an eclipse drake be eliminated, and the time of year could be a pointer to a natural origin, plus it has been an exceptional year for the diversity of Asian vagrants. On the negative side, it is a relatively unlikely vagrant, but stranger species have occurred. The elimination of the bird being an escape from a wildfowl collection will be difficult, and if aged as an eclipse drake the fate of this individual will be sealed. For those interested in a decision one way or the other, the best policy would be to go and see the bird while it is there.