The cost of conserving a species

How much does it cost to save a species from extinction? There is no straightforward answer to this, due to the complexity of compiling all necessary information on likely costs involved. However, it is imperative to try, because the resources available for conservation tend to be limited and thus should be used to optimum effect.

More than seven years ago, an authoritative scientific article (McCarthy et al 2012) gave an overview of the probable financial costs to prevent extinctions of threatened species and to protect and effectively manage all terrestrial sites of global conservation significance. These costs were calculated to be US$4.76 billion, and US$76.1 billion respectively. When put into context, these are not impossibly large sums of money. For instance, the amount required for terrestrial sites is only 1% of the US$75.59 trillion Gross World Domestic Product in the year the article was published. In the preceding 15 years, the world lost an estimated US$4-20 trillion per year in ecosystem services (supply of clean water, natural flood control, soil formation, etc) due to human-induced change of natural areas. The authors of the article, projecting a decade ahead, estimated that only 12% of the total funds needed annually to reduce the extinction risk of all globally threatened bird species was available.

The Loro Parque Fundación (LPF) supports projects intended to reduce the extinction risk of threatened parrots, and to help maintain their natural habitats. Since 2006, one of those species has been the Endangered Lear's Macaw, which has a very small geographical distribution in the arid caatinga biome in the north of Bahia State, Brazil. Found in the wild as recently as 1978, with a population of about 60 individuals, Lear's Macaw nests in cavities in sandstone cliffs. It is threatened by extensive livestock grazing and other agricultural activities which cause the loss and degradation of its habitat, especially when an important food resource for the species, Licuri Palm fruit, is affected. Furthermore, Lear's Macaws are removed from the wild in two ways: chicks are poached from nests for illegal trade, and adults are killed by farmers because of damage to maize crops. In the past, they were also hunted for food. Currently the species is mainly concentrated in two protected areas called Raso da Catarina Ecological Station and, 38 km further west, Canudos Biological Station. 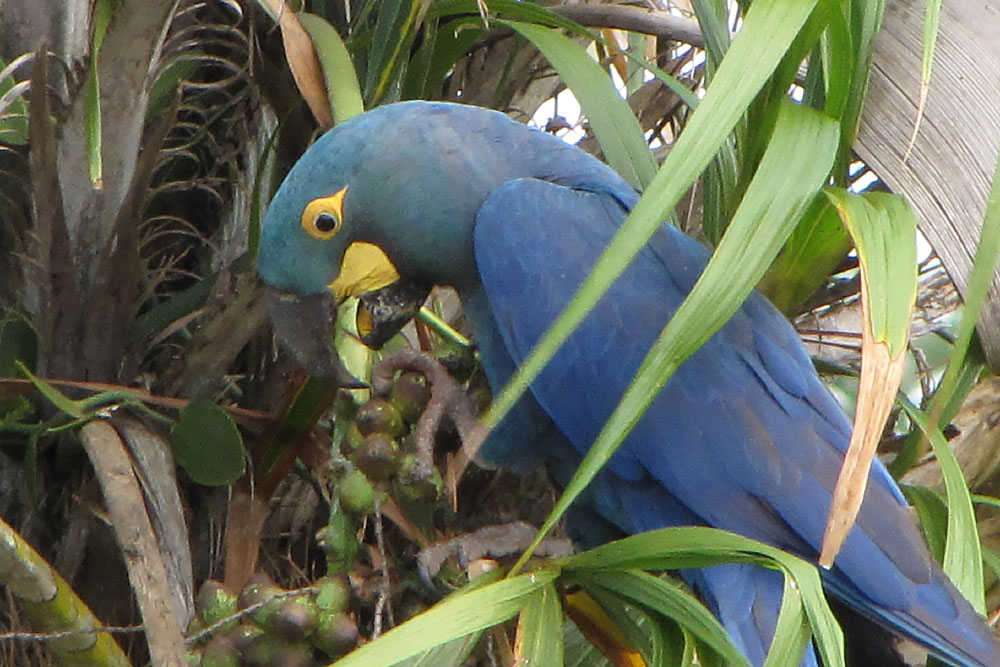 A Lear's Macaw feeding on the fruits of a Licuri Palm (Loro Parque Fundación).

Returning to the question of calculating the cost to prevent the extinction of a species, a recent article by Antonio Barbosa and José Tella, researchers respectively at the National Centre for Bird Conservation and Research, Brazil, and the Doñana Biological Station, Spain, details how they have done this for Lear's Macaw. They developed a framework which not only detailed the costs of conserving macaws in the wild, but also the rewards of such conservation actions, not just for the target species but also for habitat protection, restoration of ecosystem services and economic rewards for local people.

The study found that the total funds invested in Lear's Macaw conservation over the 25 years to 2017 reached US$3.66 million. The proportional contribution of different sectors of society to the total were as follows: state (principally Brazil) 59%, private funders 6%, national non-governmental organizations (NGOs) 10% and international NGOs 25%. As an international NGO, LPF donated US$462,602, half of the funds for that sector. The proportions varied over time, with the international NGOs constituting the main funding source for the early years, but with the state assuming a major role, in particular between 2001 and 2012 when the Brazilian authorities established and maintained a research base and full-time field team. 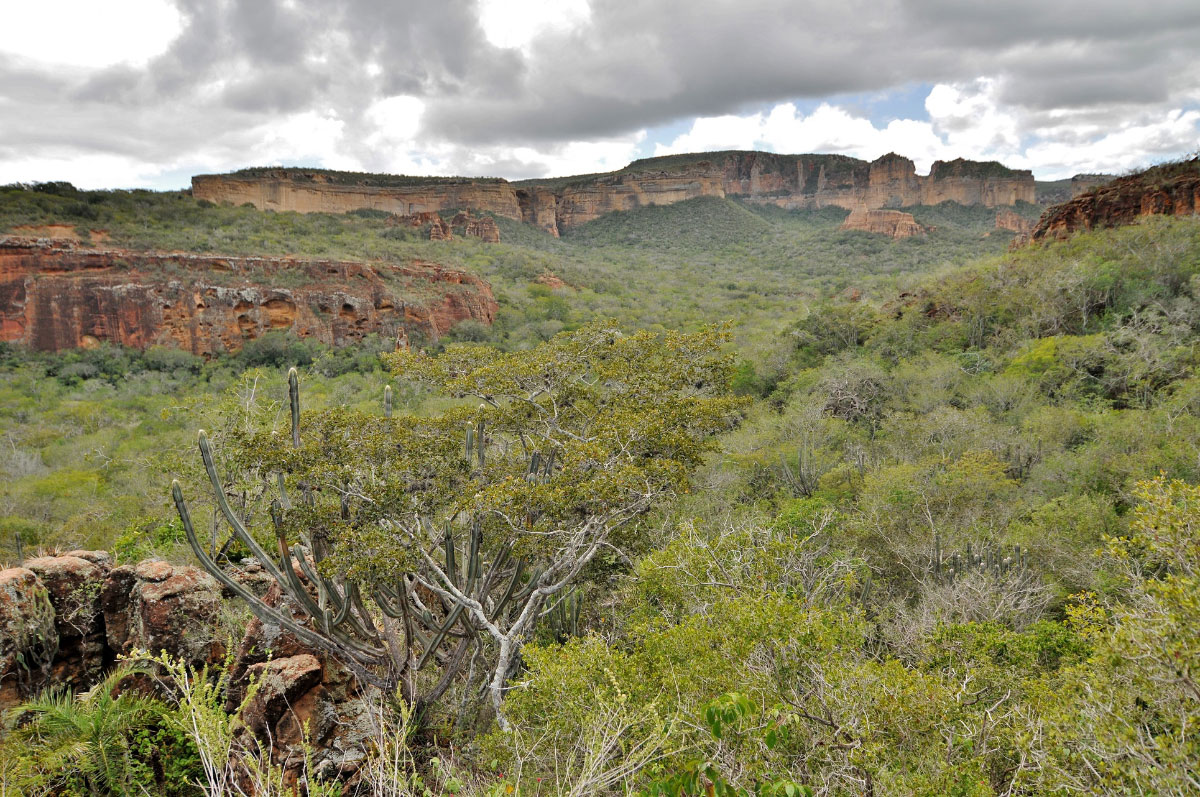 Lear's Macaw breeds on cliffs such as these, nestled among the unique caatinga habitat of Brazil (J Cornejo / LPF).

Different conservation activities received funding in the following proportions: research 51%, protection 22%, social (awareness/capacity-building with local communities) 16%, annual censuses 4%, meetings (National Action Plan) 4% and population reinforcement 3%. The Brazilian government supported most of the costs of research, annual censuses and meetings as well as almost half of spending on social activities. International NGOs were the major contributors to the direct protection activities, and covered about 50% of the social activities. LPF has also helped to supply maize seed to compensate farmers for crop damages caused by Lear's Macaws, and also contributed to monitoring nests on the cliffs. Of the funds used for protection, the study showed that 80% were used against nest poaching for illegal trade and 16% against killing of macaws by farmers. Poaching and killing by farmers caused 103 Lear's Macaws to be removed from the wild population.

No funds were devoted to modify power lines to reduce collision risks, which cause 2% of the losses of macaws from the wild population. Neither were any funds assigned to protect foraging habitats, a matter which should be seriously deliberated by the Brazilian government given that the acquisition, wages and maintenance of land and property are highly expensive. In terms of habitat loss within the macaw's foraging distribution over the 16 years from 2000, the study showed that forest cover had decreased by 20%, while the agro-pastoral surface increased by 23%. Despite the obvious trends, because of high inter-year variability these changes over time were not statistically significant. 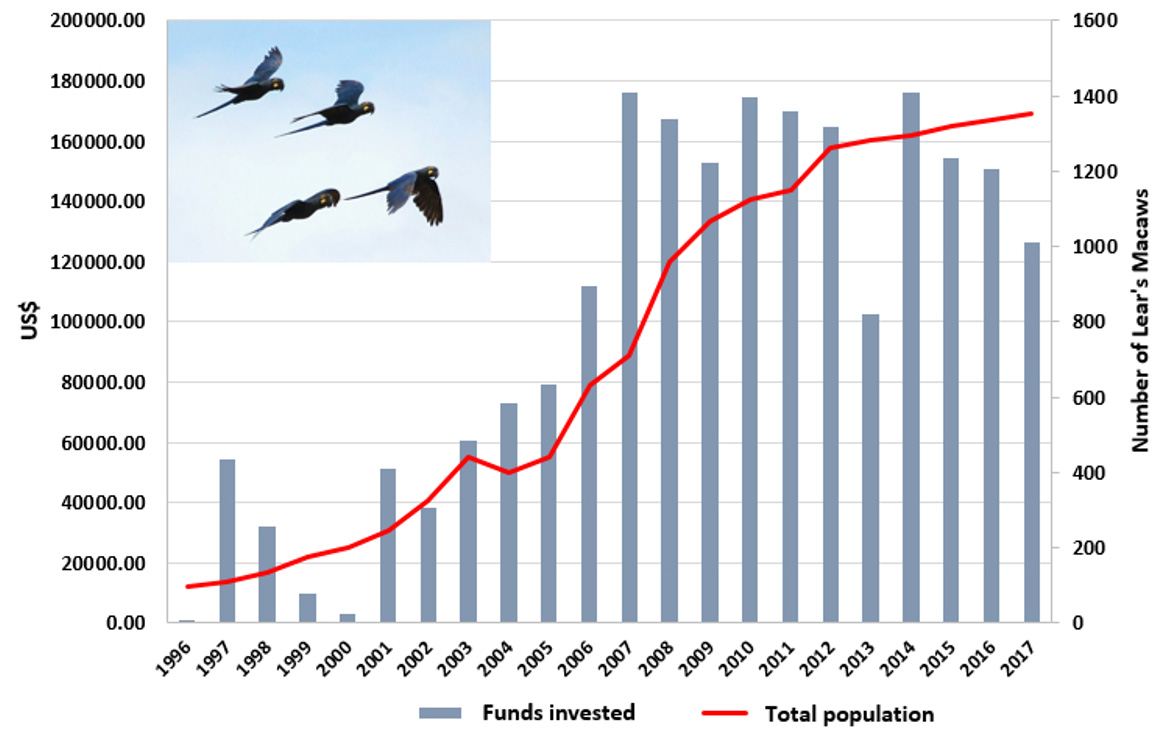 Graph demonstrating the relationship between funds invested and the total wild population of Lear's Macaw (LPF).

The conservation rewards were satisfactory, with the cost and time needed to downlist (in 2009) Lear's Macaw from Critically Endangered to Endangered being similar to those invested in other bird species. Its global population has increased in parallel with conservation funds invested. However, economic rewards through ecotourism and handicrafts linked to the conservation of the species were low and require promotion. The study did not quantify ecosystem services provided by Lear's Macaws.

The study has the private sector as the only supporter of population reinforcement. However, in the past two years, LPF has been contributing funds as well as captive-bred Lear's Macaws, with these released at a location frequented by two wild individuals 135 km to the west of Canudos. It is expected that this reinforcement and the international captive breeding programme will continue, with ongoing investment in ex situ conservation by the programme partners, of which LPF is a founder.