It's been an action-packed year for birds, BirdTrack, and BirdTrackers! A record 5,693 people have added nearly 2.4 million observations to BirdTrack so far in 2012, providing important data for ongoing research and a range of conservation outcomes. We'd like to say a huge thank you to everyone who has contributed. Read on to review some of the year's highs and lows for our birds, catch up on the latest Waxwing news, find out what's been happening in BirdTrack, and look forward to some exciting challenges in 2013!

2012 began with an impressive influx of Iceland Gulls, their reporting rate reaching an all-time high in late January. Attention soon switched to returning migrants, many of which were held up by bad weather across much of western Europe in mid-April. The main arrival periods of species such as Sedge Warbler, Lesser Whitethroat and Turtle Dove were delayed by up to three weeks! Subsequent wet spring and summer weather caused many species to suffer a poor breeding season, as recently revealed in the preliminary results from the Nest Record Scheme and Constant Effort Site Scheme.

Weekly reporting rate for Sedge Warbler (the proportion of complete lists submitted that include this species) (BirdTrack).

Behind the scenes at BirdTrack it has been a hectic year. We were very pleased to welcome the Welsh Ornithological Society to the BirdTrack partnership in the summer. Another new venture saw us working with the British Dragonfly Society to build in the facility to record dragonflies and damselflies. Launching the BirdTrack app for Android smartphones was a significant step forward, and an iPhone version is in the latter stages of development right now! We also entered the world of social media; you can keep up with all the latest BirdTrack news by following @BirdTrack on Twitter. 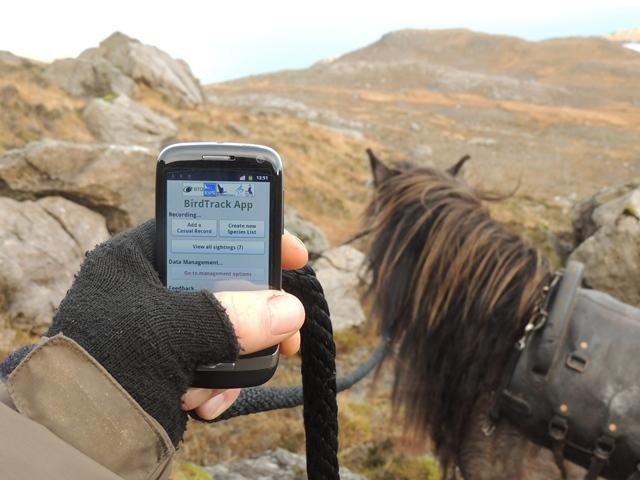 BirdTrack app in action, recording birds on the Isle of Rum (Sean Morris).

Two big stories of this year's autumn migration were the unusually large movement of Jays in early October and the huge fall of migrants along the east coast a few weeks later, both of which featured in the BirdTrack weekly updates. Since then, Waxwings have been hogging the headlines — not to mention any berries they can find! More than 3% of BirdTrack complete lists included Waxwing by the end of November, compared to the seasonal average of about 0.5%. 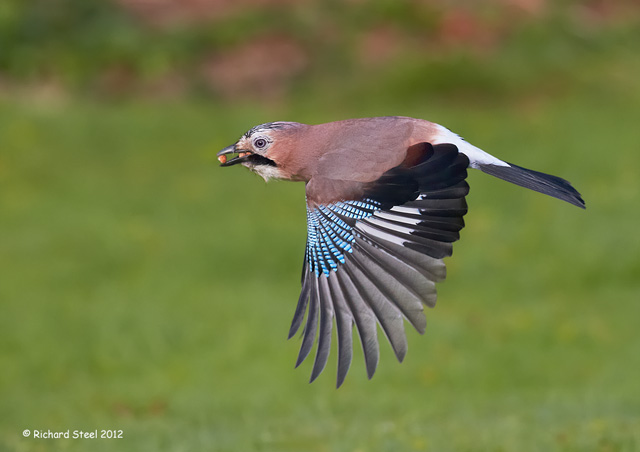 Further enticing BirdTrack developments are in the pipeline for 2013. Improving the look, feel and functionality of the Home and Data Home pages are the top priority, along with releasing the eagerly awaited iPhone version of the app. We'd also like to build on the successful inclusion of dragonfly recording by adding some other taxa that are regularly recorded by birdwatchers.

Out in the field, two exciting birdwatching challenges that might appeal to patch-based BirdTrackers have been organised. The Patchwork Challenge is a year-long patch-focused competition, whilst Foot It challenges folk to record as many species as possible on foot from home in January. Both challenges are strongly encouraging participants to submit complete lists to BirdTrack.

You can browse all previous BirdTrack stories in the newly refurbished archive of BirdTrack weekly updates.