As the trees begin to shed their leaves, so pipits begin moving. Perhaps the first to migrate in numbers is Tree Pipit, followed by dispersing bands of Meadow Pipits from both the northern parts of the British Isles and Scandinavia. A potential confusion species with the former by voice and the latter by appearance is Red-throated Pipit, a long-distance migrant from northern Russia and further east. It turns up as an annual vagrant, usually along the east coast and on the Northern Isles.

Meadow Pipit is a fairly ubiquitous presence in open country year-round, and its sip-sip-sip call can be heard overhead during autumn movements across the land, even if the birds can’t be seen.

On the deck, Meadow Pipit appears largely dark buff at this time of year. It has a faint supercilium, mostly in front of the eye, and pale lores, creating a guileless-looking face. It has a heavily streaked mantle and crown, and the bold streaks continue onto the chest and flanks, sometimes grouping together to form a patch on the centre of the chest. There is an off-white background colour to the chest streaks, which becomes richer on the flanks.

The unmarked rump is a brighter buff than the rest of the bird. Some individuals of the endemic British subspecies whistleri can have bright rufous underpart tones, particularly on the throat and breast, leading to confusion with Red-throated Pipit (see Birdwatch 228:38). The bill is comparatively thin, with a pale base to the lower mandible. Meadow Pipit has a long slightly curved hind claw, when this can be seen.

The most usual confusion species in Britain is Tree Pipit. Close observation reveals a more robust bill, usually with a pinkish base to the lower mandible, a more obvious supercilium, extending behind the eye and coalescing in a pale spot at the rear of the ear coverts, and a thin black loral line, although this isn’t always obvious. The species’ mantle and crown are almost as heavily streaked as in Meadow, but the ground colour is usually a little paler. The breast streaks are also bold, but should be obviously thinner on the flanks and often have a paler ground colour in general.

The rump is unmarked like Meadow, but more concolorous with the back, and the hind claw is relatively short and obviously curved. The black-and-white median coverts are brighter in Tree Pipit, as are the white tips to the greater coverts, giving a slightly more wing-barred appearance than Meadow in some individuals. Tree Pipit’s call is a distinctive, often surprisingly loud, shpeeezz, but it can also give a sooot call when alarming.

The much rarer Red-throated Pipit is often picked up overhead on call, but because its pseeee note is fairly similar to the main Tree Pipit call, the bird is best confirmed by sight for all but the most experienced birders. An adult bird will normally have a pink hue to its breast, throat, cheeks and supercilium, but beware brighter British Meadow Pipits which can show something similar.

First-winters are the most confusing and the most likely to wander off course come the autumn months. The fine bill and heavy mantle and crown streaking overlap somewhat with Meadow. The pink hues of the adult birds are completely absent in first-winter Red-throated Pipit, and it generally has a couple of well-marked whitish mantle stripes on either side, though these can be hidden when the feathers are ruffled, and some Meadows can approach this condition.

The underparts are much whiter than the other two species, though worn adults of either commoner pipit can be similar, and the breast and flank streaks are bold and of fairly even composition. The brightness of the median and greater covert tips make for even more obvious wing-bars than Tree Pipit, and the central undertail covert has a black streak on it. The upper breast streaks coalesce to form a quite large black neck-patch, but again care must be taken with some Meadow Pipits which can almost match this. The moustachial strip is bright white, and more obvious than on the other two species. Crucially, the rump is noticeably streaked, but concolorous with the back, as in Tree Pipit. 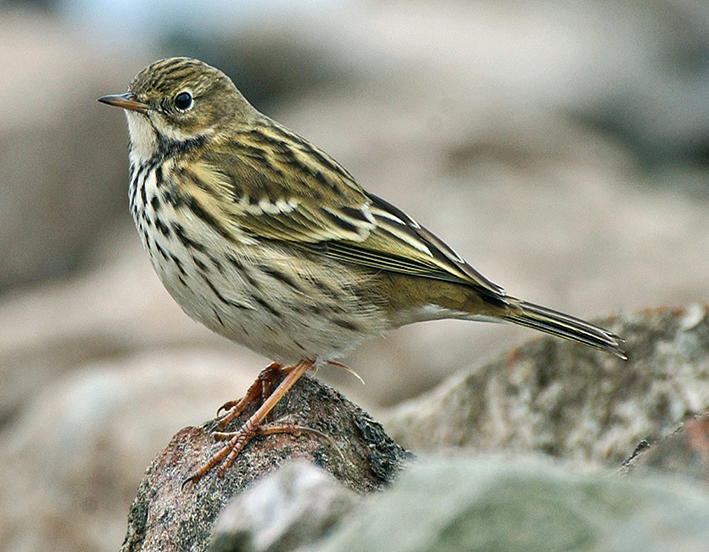 Meadow Pipit (southern Spain, 20 November 2008). A overall buffy-toned species,
particularly on the rump and uppertail coverts. There is often only a hint of a
supercillium in many individuals. Photo by Steve Young (www.birdsonfilm.com). 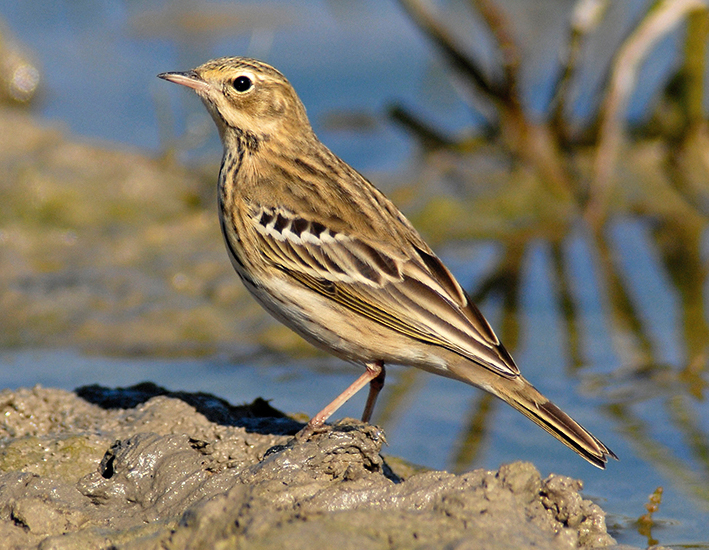 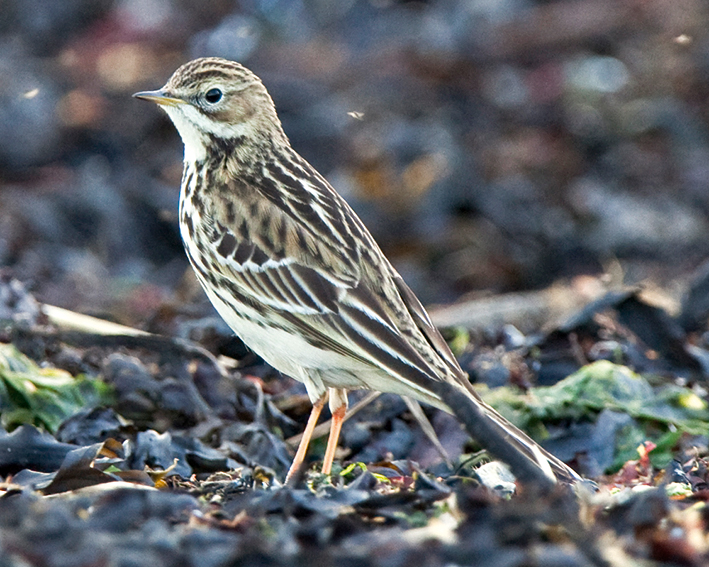 Red-throated Pipit (Ballycotton, Co Cork, 8 November 2009). Note the much cleaner
underparts and brighter median coverts than Meadow. The white braces can also
just about be seen on this individual. Photo by Polina Kasapova.
Content continues after advertisements
Login to leave a comment
Return to List