One of the main aims of SeaWatch SW is to provide a focal point for land-based recording of the Critically Endangered Balearic Shearwater in UK and Irish waters. Our partners at Marinelife are also leading on intensive boat-based recording of this species in the English Channel. Data collected between 2007 and 2009 are already feeding into ongoing conservation efforts; for example, SeaWatch SW have recently provided input to the updated Balearic Shearwater Species Action Plan. We are grateful to all observers who have provided us with records, and urge anyone who sees a Balearic Shearwater in the UK and Ireland in 2010 to contact us with details of the sighting, and/or submit their record to BirdGuides. 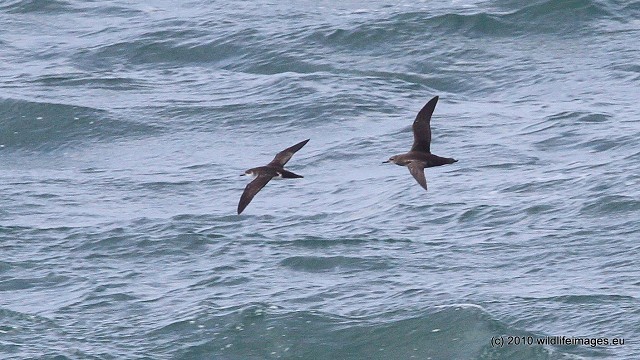 The 2010 SeaWatch SW survey at Gwennap Head in southwest Cornwall continued throughout August, with the Seabird Observer team comprising Tom and Sarah McKinney, Chris Kehoe, Ryan Irvine, Kevin Rylands, Andy Symes, Simon Hartill and John Swann. They were supported by several Marine Wildlife Observers, postgraduate students, and visiting birders. Daily updates are being posted on the Results page of the website and a summary of August sightings is provided below. Visitors to the watchpoint are always welcome, and a location map and updated observer schedule can be found on the About and Get Involved pages of the website. 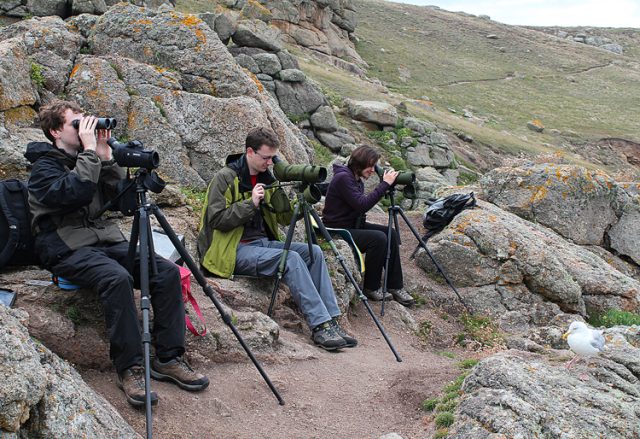 Ups and downs for Balearic Shearwater and Basking Shark sightings

The high numbers of Balearic Shearwaters seen in July continued throughout August, with a monthly total of 1066 seen off Gwennap Head. The peak count was an impressive 160 on 6th, although up to 230 were seen by visiting observers at nearby Porthgwarra Cove on this date — the lower elevation in the cove aiding observations in the murky conditions. This is the highest count for SeaWatch SW, and one of the highest counts in the UK in recent years, and coincided with unprecedented numbers off northern France. A further 102 were seen on 20th and 105 on 26th. The passage rate for the period 15th July to 31st August is roughly 2.75 birds per hour, which is twice as high as the overall passage rates of the previous three years. In contrast, Basking Shark surface sightings were very low in August, totalling just 29 with no day peak exceeding six. At the time of writing (mid-September) numbers have remained low, and it therefore looks like shark sightings over the four years of the Gwennap Head survey will show a progressive decrease. The Marine Conservation Society have just released their 2009 Basking Shark report, which supports the above pattern. 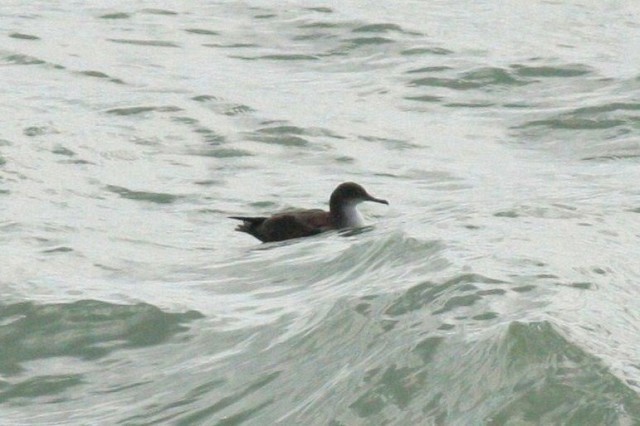 Following on from a series of records of Yelkouan-type shearwaters off Porthgwarra in July, a further two birds were seen moving west on 6th August, coinciding with the peak Balearic Shearwater passage described above. A paper on recent records of Yelkouan-type shearwaters in northeast Atlantic waters is currently in preparation. The other seabird highlight was four Great Shearwaters in the period 19th–21st, although there was a complete absence of Cory's Shearwaters. Manx Shearwaters continued to move through in large numbers, peaking at 4207 on 3rd. The increased dispersal of Mediterranean Gulls also continued through August, with the total of 80 mostly relating to juveniles moving west. Other seabird totals in August included 118 Sooty Shearwaters, 201 Storm Petrels, one Grey Phalarope, 132 Great Skuas, 2 Pomarine Skuas, 41 Arctic Skuas, one Little Gull, two Yellow-legged Gulls, one Roseate Tern and 24 Puffins. A good selection of migrant waders during the month included sightings of Ringed Plover, Oystercatcher, Grey Plover, Dunlin, Sanderling, Snipe, Whimbrel, Bar-tailed Godwit, Black-tailed Godwit, Redshank, Greenshank, Common Sandpiper and Turnstone. The landbird highlight was a Montagu's Harrier seen briefly over the watchpoint on 26th. Also of note were two Choughs seen on several dates, two Peregrines, two Little Egrets and a Quail heard at dawn at Ardensawah Farm on 8th. 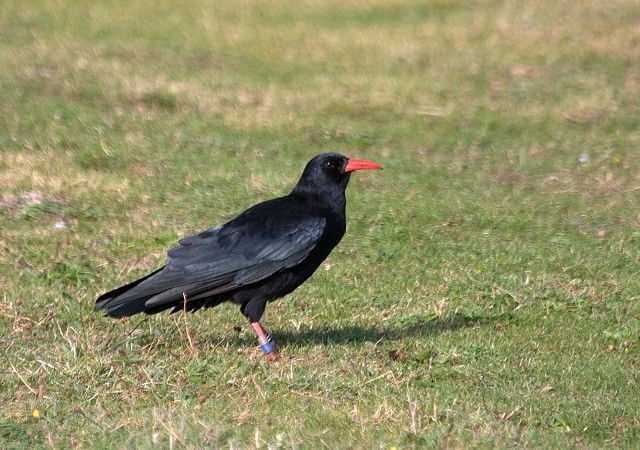 Minke Whales and other marine wildlife sightings off Gwennap Head

The cetacean highlight of August was a Minke Whale seen repeatedly breaching on 7th, with others seen on 23rd and 29th (the latter was also breaching). A group of at least three Risso's Dolphins on 3rd included a calf repeatedly breaching. Peak counts of other cetaceans included 50+ Common Dolphins, 15 Bottlenose Dolphins and 8+ Harbour Porpoises. There was a poor total of seven Ocean Sunfish, while the Grey Seal haul-out peaked at 14.

On 21st, SeaWatch SW observers recorded a colour-ringed adult Kittiwake at the Gwennap Head watchpoint. Simon Boswell followed up the record and found that this bird had been ringed as a chick at a colony in Finistère, western Brittany, on 4th July 2005. In 2008 and 2009 it was observed back at the colony, and in 2010 made its first breeding attempt there, having arrived back on 15th March. It fledged one chick and was last seen on 18th August, just three days before it arrived at Gwennap Head. Its departure may have been triggered by a Peregrine catching and eating a fledged chick on the adjacent nest! Thanks to Simon and Jean-Yves Monnat for providing the above information.

The SeaWatch SW sister sites made a number of interesting observations in the period 15th July to 1st August, all reported to BirdGuides. Berry Head, in south Devon, saw a peak of 24 Balearic Shearwaters on 6th August, although the highlight was probably an Alpine Swift seen overhead on 15th July. More details of Berry Head and other Devon sightings can now be found on the Devon Birds blog. Pendeen, in northwest Cornwall, produced a couple of Great Shearwaters in early August and a peak count of 30+ Balearic Shearwaters on 4th August (with 10,000+ Manx Shearwaters). Strumble Head, in Pembrokeshire, had a peak of 27 Balearic Shearwaters on 28th August and small numbers of Great Shearwater, Grey Phalarope, Long-tailed Skua, Mediterranean Gull, Sabine's Gull and Roseate Tern. Groups of four and two Risso's Dolphins, on 14th and 31st August respectively, were also notable. Whitburn, in northeast England, produced large numbers of Roseate Terns, peaking at 115 on 30th August. Other sightings included Balearic Shearwater, Cory's Shearwater, Red-necked Grebe, Velvet Scoter, Long-tailed Skua, Mediterranean Gull, Sabine's Gull, Black Tern and Black Guillemot. Rarity highlights included an adult Bonaparte's Gull in late August and a Red-backed Shrike in mid-August. A pod of 20+ White-beaked Dolphins was seen feeding offshore on 7th August. 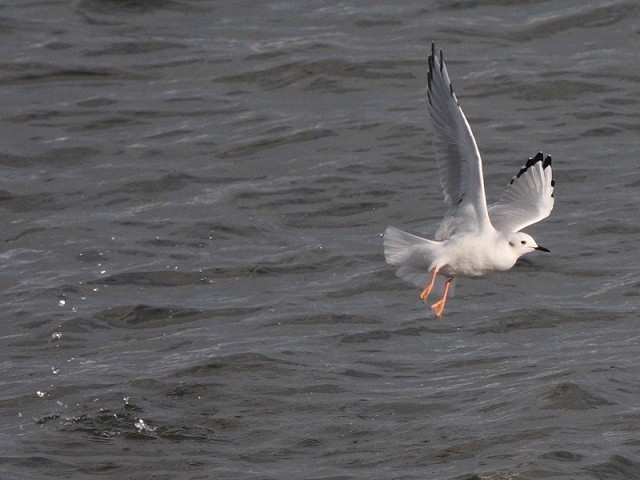 Full details of this project can be found in archive news and in the BirdGuides webzine. After application of the colour dye on a number of presumed non-breeding Manx Shearwaters at Skomer Island, Pembrokeshire, in late June and early July, we soon received three independent reports involving two birds off southwest UK on 4th July. No more were seen in that month, despite many thousands of Manx Shearwaters being carefully scrutinised by SeaWatch SW observers. However, one was subsequently seen moving west off Pendeen on 3rd August. The latter record is important as it shows that the dye can persist for up to a month in the marine environment. We hope to continue this project in 2011.

The SeaWatch SW Annual Report 2009 is now online and can be downloaded from the project website. This 118-page report, illustrated throughout with colour images, includes a summary of all Balearic Shearwater records from the UK and Ireland during the year. The report also contains all the data from the SeaWatch SW survey that took place between 15th July and 15th October 2009, with intensive effort-based observations at Gwennap Head, Porthgwarra, supported by sister sites at Berry Head, Pendeen, Trevose Head, Strumble Head and Whitburn. Finally, a summary of boat-based observations in the western English Channel has again provided by our partners at Marinelife. A shorter version containing a summary of key results is also available.