One of the main aims of Seawatch SW is to provide a central point for Balearic Shearwater recording in UK and Irish waters; this will allow us to put project results into a national context. 2007-08 results are already feeding into ongoing conservation efforts led by RSPB and JNCC at both a national and international level. We are grateful to all observers who have provided us with records, and urge anyone who sees a Balearic Shearwater in the UK and Ireland in 2008 to contact us with details of the sighting, and/or submit their record to BirdGuides. We have already compiled over 620 records up to the end of August, compared to 550 records up to this point in 2007. 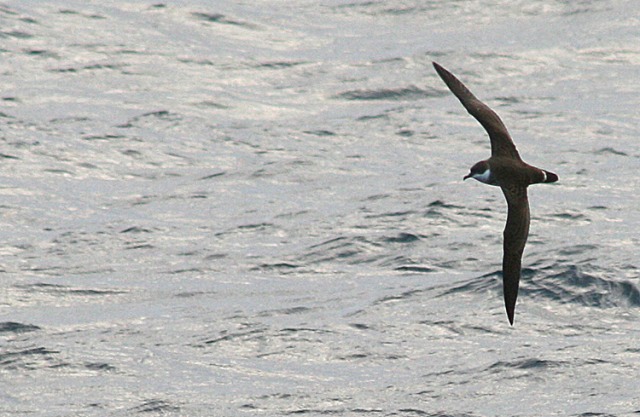 During July, the majority of Balearic Shearwater reports were restricted to the south coast of England, with peak counts of 60 off Portland Bill (Dorset) on 4th July and 78 moving south off Berry Head (Devon) on 5th-6th July. However, as birds pushed northwards during August more records began to come in from North Sea and Irish coasts, with one bird even making it to Lewis (Outer Hebrides). Two birds seen passing several Norfolk sites during a two-hour period on 30th August were estimated to be averaging 30 kmh (19 mph). The largest numbers were again off southwest England, with a peak passage of 192 moving south off Berry Head on 16th-18th August. Further details and distribution maps can be found on the Results page of the project website.

The SeaWatch SW survey at the Gwennap Head watchpoint (near Land's End in Cornwall) is now in its final two weeks, and will finish on 15th October. Daily updates are available on the Results page of the project website, and images are on the Gallery. Our volunteer observer team, comprising experienced Seabird Observers and supporting Marine Wildlife Observers, have done a fantastic job recording a wide variety of species for 80 consecutive days. Visitors are still welcome, and detailed directions to the watchpoint can be found on the website. Further details for potential observers can also be found on the Get involved pages and, if you missed out this year, we plan to run the survey again from 15th July to 15th October next year. 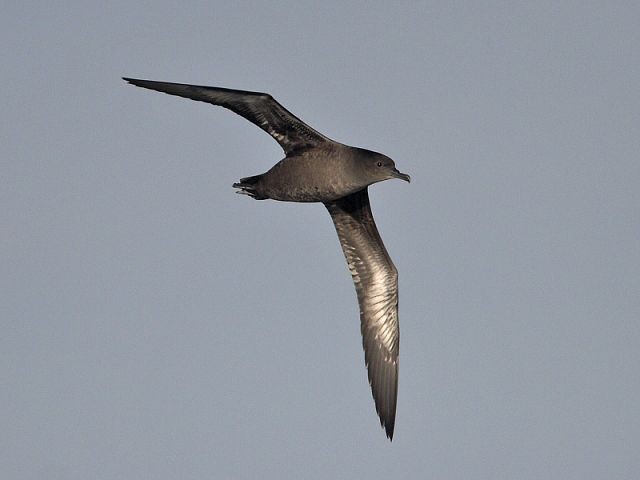 Following the spectacular influx of Cory's Shearwaters off Gwennap Head in late July, the action got even hotter in August and September. Shearwaters again dominated, and a total of 642 Balearic, 38 Great Shearwaters, 104 Cory's and 513 Sooty Shearwaters were recorded passing the watchpoint between 1st August and 30th September. However, the highlight was a Fea's Petrel seen moving west at about 14:00 on 25th August. First picked up by visiting birder Brett Richards, this national rarity was also seen by SeaWatch SW observer John Swann. Brett then went on to see a Wilson's Storm-petrel the following day! Also seen off Gwennap Head in August and September were 443 European Storm-petrels, 1 Leach's Storm-petrel, 4 Red-throated Divers, 1 Black-throated Diver, 1 Great Northern Diver, 87 Grey Phalaropes, 36 Pomarine Skuas, 19 Mediterranean Gulls, 4 Little Gulls, 4 Sabine's Gulls, 25 Black Terns and 20 Puffins. In the coming months we will also be analysing data obtained from our sister sites (Berry Head in Devon, Strumble Head in Pembrokeshire and Trevose Head in Cornwall), to see how their observations compared during this busy period. Further details from Gwennap Head are on the Results page of the website.

Following on from the low numbers in July, Basking Sharks were again in short supply off southwest England during much of August, with only 16 recorded off the Gwennap Head watchpoint between 1st and 26th August. However, there was then an influx of at least 17 on 27th August, with numbers peaking at 31 on 19th September before declining rapidly in late September. This pattern of low numbers in July and a September peak is similar to 2007, and is probably the result of poor midsummer weather preventing formation of plankton concentrations in surface waters. A good total of 17 Minke Whale sightings were made between 4th and 29th September (including two seen breaching), and a scatter of Risso's Dolphin sightings included four on 13th September. Common Dolphins were seen in lower numbers than 2007, with peaks of 50+ on 29th August and 15th September. Up to 18 Harbour Porpoises were seen intermittently, and a pod of eight Bottlenose Dolphins (including two calves) was noted on several dates. A total of 24 Ocean Sunfish and up to 17 Grey Seals were also recorded in August and September. Further details on the Results page of the website.

Land bird migration gets going, with a few rarities too

In addition to marine wildlife, the SeaWatch SW team recorded some interesting land-bird migrants during August and September, both at the Gwennap Head watchpoint and nearby in Porthgwarra Valley. Particularly noteworthy was a Pectoral Sandpiper found by Matt Johnson as he was walking to the watchpoint via Porthgwarra Valley at dawn on 28th August, and a Corncrake flushed by Kevin Bainbridge in the same area on 8th September. Other waders included Dotterel, Greenshank and Green Sandpiper flying overhead, while raptors included single Merlin and Short-eared Owl, and two juvenile Hobbies on 26th September. The Common Crossbill irruption reached southwest Cornwall, with a total of 10 flying over in early September, and other notable migrants included a Melodious Warbler on 9th September, a Wryneck on 10th September, a Pied Flycatcher on 22nd and 25th September, and a Yellow-browed Warbler and a Firecrest on 30th September. Herons also featured, with 15 Grey Herons on 14th September and 14 Little Egrets on 19th September, while the most bizarre record was probably the Black-tailed Godwit seen flying offshore with a flock of Manx Shearwaters on 13th August! Further details on the Results page of the website.

SeaWatch SW observers find Swinhoe's Storm-petrel (but not in Cornwall!)

Ken Shaw joined the SeaWatch SW co-ordinator, Russell Wynn, on a scientific expedition to the northeast Atlantic this summer. From 5th August to 3rd September the flagship of the UK research fleet, RRS James Cook, was working far offshore between the Canary Islands and the north Biscay margin as part of a geological research expedition. Ken, as the Marine Wildlife Observer, recorded all seabirds and cetaceans during the trip, and daily updates can be viewed on the JC027 Results page of the website. Highlights included a Swinhoe's Storm-petrel seen 100 miles off Lisbon (Portugal) on 19th August, a photographed presumed Scopoli's Shearwater in the central Bay of Biscay, a Belgian-ringed Reed Warbler that arrived on the ship, and good views of breaching Fin Whales in Biscay. Written accounts of the expedition are currently in preparation and will hopefully appear in wildlife journals in due course. 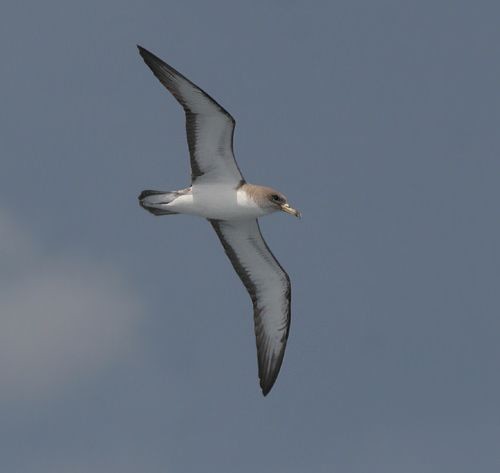 For the second year running, observers from the Fundacion Migres team have been counting Balearic Shearwaters as they pass out of the Mediterranean Sea via the Straits of Gibraltar. Between 15th May and 15th July the team managed to cover about 60% of daylight hours, and saw a total of 18,510 birds passing through, almost all of which were moving west into the Atlantic Ocean. This is the second year running that the team has conducted this survey, and the results are indicating that the world population of Balearic Shearwater is likely to exceed 20,000 individuals, and may even be as high as 40-50,000 individuals. Careful counting of known breeding sites on the Balearic Islands in 2007 (by Miquel McMinn and Ana Rodriguez) again produced a total of 2100-2400 pairs, so either a large proportion of the population is composed of non-breeding birds, or there are undiscovered breeding colonies waiting to be found.

SeaWatch SW publications in the pipeline

The SeaWatch SW team are dependent upon the support of the UK and Irish sea-watching community for our data, and we are committed to ensuring these data are used for both conservation and science. The project began in 2007 and, although the data are already being actively used for conservation purposes, it will take several years of monitoring before we are ready to publish most of the scientific results. This is because we need to assess how both short-term factors, e.g. weather and tide, and long-term factors, e.g. year-to-year changes in sea temperature and prey distribution, affect the distribution and migration of our target species. However, we are currently preparing a short note on Balearic Shearwaters in UK and Irish waters for the period 2004-06. This update will provide a link between previously published studies covering the period up to 2003, and the new SeaWatch SW data collected from 2007 onwards. In addition, the SeaWatch SW survey data have already contributed to four successful Masters student projects, and are now being used by a further Masters student (Rachel Evans), an undergraduate student (Kathryn Driscoll) and a PhD student (Alice Jones).