The 2010 SeaWatch SW survey at Gwennap Head, southwest Cornwall, has now begun, with project co-ordinator Russell Wynn acting as Seabird Observer from 15th–31st July. The first day at the watchpoint coincided with a summer storm but, despite 61 mph gusts and torrential rain, a full day of observation was completed, supported by assistant co-ordinators John Swann and Alice Jones, as well as several Marine Wildlife Observers, postgraduate students and visiting birders. Daily updates are being posted on the Results page of the website and are also summarised below. Visitors to the watchpoint are always welcome, and a location map and updated observer schedule can be found on the About page and Get Involved pages of the website.

Due to a late withdrawal, we have an opportunity for an experienced Seabird Observer to join the 2010 survey team at Gwennap Head from 22nd–27th August. Seabird Observers are responsible for recording all migratory seabirds and assisting with identification of other marine wildlife. Prior experience of Balearic Shearwaters and other regularly occurring seabirds is therefore required. Free accommodation near the watchpoint is provided (at Ardensawah Farm B&B), as well as travel expenses equivalent to £70 a week. If you would like to get involved then please get in touch and help ensure we have coverage for the entire 93-day survey period for the fourth year running! See the Get Involved pages on the website for more details and an updated observer schedule.

One of the main aims of SeaWatch SW is to provide a focal point for recording of the Critically Endangered Balearic Shearwater in British and Irish waters. Data collected over 2007–09 are already feeding into ongoing national and international conservation programmes managed by RSPB and Birdlife International. Our partners at Marinelife are also running intensive boat-based surveys in the English Channel for this species. We are grateful to all observers who have provided us with records, and urge anyone who sees a Balearic Shearwater in Britain and Ireland in 2010 to contact us with details of the sighting, and/or submit their record to BirdGuides or BirdTrack. A summary of all 2010 sightings from the first half of the year will be released later in August. Finally, our colleagues in Ireland are starting a series of co-ordinated seawatches — the Seatrack project — from headlands this summer and autumn, targeting Balearic Shearwaters and other seabirds. 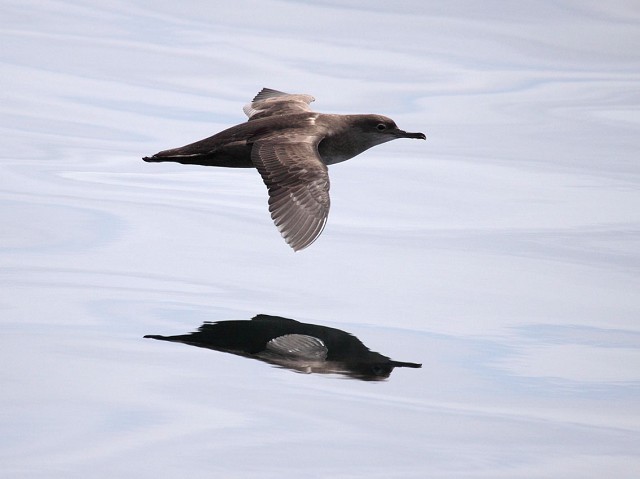 Massive influx of Balearic Shearwaters into the western English Channel

A major result of the first three weeks of the 2010 survey has been a record-breaking influx of Balearic Shearwaters into the western English Channel. Birds were late arriving this year, with the first significant count being 53 past Berry Head (Devon) on 13th–14th July. A total of 502 were then recorded passing Gwennap Head between 15th and 31st July, equivalent to 2.4 birds per hour. This is much higher than the average rates recorded during the 2007–09 surveys, which were in the region of 1.1 to 1.4 birds per hour. In recent days, there have also been feeding gatherings, numbering up to 50 birds, reported from the Lyme Bay region. These results start to make sense when compared with news from the French side of the Channel of a late arrival of birds, with passage rapidly gathering pace in mid-July — 1,120 flying east off Lannion (west of Saint-Malo in northern Brittany) on 18th July and a massive gathering in Bay of Lannion of 4,630 birds on 30th July. These unprecedented counts were supplied by Laurent Thebault, who has also uploaded this video of a massive rafting group of Balearic Shearwaters.

What are the Yelkouan-type shearwaters being seen off southwest UK?

In addition to the large number of Balearic Shearwaters described above, there was an intriguing series of reports of Yelkouan-type shearwaters from the southwest during July. Sightings came from several sites in southwest Cornwall between 10th and 24th July, with one also seen from a pelagic off the Isles of Scilly on 19th July. These records mostly came from experienced seabird observers, familiar with the range of plumage variation shown by Balearic Shearwaters. For example, a Yelkouan-type shearwater passing the SeaWatch SW watchpoint at Gwennap Head on 17th July was observed at relatively close range by the project co-ordinator, who has had experience of Manx, Balearic, Yelkouan and Menorcan in recent weeks. This bird certainly showed all the plumage features of classic Yelkouan and was called immediately as such — it showed clean white underparts and underwings, paler upperpart colouration and duskier neck sides than adjacent Manx Shearwaters, and an attenuated rear end. A series of photos were obtained and have yet to be processed, but are probably of limited use due to the poor light and distance of the bird (about 400 m).

Current news on the first photographed British Yelkouan Shearwater (recorded off Berry Head in 2008) is that it is still under consideration by BOURC as a potential first for Britain. However, a significant complication is that many birds from Menorca (Menorcan Shearwater) appear to have plumage and genetic characters that are intermediate between Yelkouan and Balearic Shearwaters — these birds are probably not separable in the field from pure Yelkouan Shearwaters. So can a Yelkouan-type shearwater seen off the UK coast be accepted as a first for Britain without genetic proof of identity? Some insight may be provided by a new article, to be prepared by the SeaWatch SW team, investigating all recent records of Yelkouan-type shearwaters off the Atlantic coast of Europe. In addition, ongoing SeaWatch SW tracking studies of Menorcan Shearwaters will tell us if these birds follow Balearic Shearwaters from Mallorca out into northeast Atlantic waters. Population ratios of Balearic to Menorcan Shearwaters are probably in the region of 100:1, so if all Menorcan Shearwaters follow their neighbours and disperse into the northeast Atlantic during the summer and autumn, then we should indeed expect to see a few of these Yelkouan-type birds around our coasts each year. Interesting times!

Another key result of the first 17 days of the 2010 SeaWatch SW survey was the large numbers of commoner seabirds seen moving in and out of the western English Channel. The most impressive total was 38,177 Manx Shearwaters, which already exceeds the annual totals of this species from the 2007–09 surveys. In addition, numbers of Guillemot and Kittiwake were higher than in previous years, all pointing towards good feeding conditions in the region — or poor feeding conditions elsewhere. Other highlights included a marked westward dispersal of Mediterranean Gulls, mostly involving fresh juvenile birds. A total of 93 were recorded, with a peak of 18 on 29th July, far exceeding previous totals at this time of year. Other notable sightings included 102 Puffins and 25 Sooty Shearwaters, as well as five Roseate Terns — a scarce bird off southwest Cornwall — a summer-plumaged Great Northern Diver and a couple of lingering juvenile Yellow-legged Gulls. A particularly memorable moment was when two Roseate Terns, a Balearic and several Manx Shearwaters, a Puffin and a Guillemot were all seen in the same field of view! Land birds of note included a couple of regular Choughs, a Little Egret and a good selection of passage waders.

As well as avian highlights, the survey team at Gwennap Head were also treated to a good selection of marine wildlife. Several Harbour Porpoises and four species of dolphin were recorded, with multiple sightings of Bottlenose and Common Dolphin and a fantastic double of two Risso's and five White-beaked Dolphins seen loosely associating together offshore on 28th July. These animals put on a spectacular display of breaching, and lingered in the area for over two hours — with Choughs continuously heard calling in the background!. White-beaked Dolphin is very rare off southwest Cornwall, but survey work by our partners at Marinelife has revealed that small numbers regularly occur in Lyme Bay further east.

One of the groups of Common Dolphins, on 31th July, was involved in a massive feeding frenzy that attracted large numbers of plunge-diving Gannets and other seabirds, as well as a brief but dramatic appearance by the only Minke Whale of the July period. Basking Sharks were again scarce, with a peak of eight feeding together on 21st July but no more than one or two on other dates. Ocean Sunfish were also regularly recorded in small numbers. Grey Seals at the nearby haul-out peaked at 11 on 31st July, although these were disturbed into the water by kayakers, despite their being politely asked to go around the haul-out site.

The data being collected by the SeaWatch SW survey team continue to contribute to a number of scientific studies, led by staff and students at the National Oceanography Centre Southampton (NCOS), in collaboration with colleagues at several UK universities and research organisations. These studies include:

A team of postgraduate students at NOCS are leading much of this work, and we are delighted to announce that two new PhD students (Sophia Butler-Cowdry and Lavinia Suberg) will be joining the team this autumn to further these research activities. These studies will require scientific peer review before we can release further details, but we will continue to include most of the raw observation data in the SeaWatch SW Annual Report.

The SeaWatch SW Annual Report for 2009 is nearing completion, but its release has been delayed due to an increase in other SeaWatch SW activities. Despite some very late nights, the final analysis is still incomplete and the revised release date is now mid-August. The report will include a summary of all Balearic Shearwater records from Britain and Ireland during the year and will include all data from the SeaWatch SW survey that took place between 15th July and 15th October. This will include the intensive, effort-based observations at Gwennap Head, supported by sister sites at Berry Head, Pendeen, Trevose Head, Strumble Head and Whitburn. Finally, detailed boat-based observations in the western English Channel have again been summarised by our partners at Marinelife.