Once again the week was a combination of mild, wet and very windy weather, with a succession of weather fronts passing over us. Many areas are on flood standby and the majority of rivers across our green and soggy land are starting to burst at the seams. The predominantly south-westerly winds backed through west to northwest briefly during the week with the result that scarce seabirds were at last evident from a number of western headlands, much to the relief of observers who have spent the last few weeks staring at empty storm tossed seas.

Most of the interest for the last week has been provided by seabird movements. Alcids dominated the scene on North Ronaldsay for five hours on the 4th as an isolated movement of 1,327 Little Auks were noted passing, along with good numbers of Guillemots and Razorbills. This was the first real movement of this charming auk since the fantastic numbers witnessed off many east-coast promontories in mid-November. Since the weekend small numbers of interesting seabirds, notably small numbers of Leach's Petrels and Balearic Shearwaters have been observed from the storm-lashed south and west coast. As the winds veered through southwest to northwest from the 5th to the 6th, the patience of west-coast seawatchers was finally rewarded on the 6th. Observers were treated to an unprecedented winter spectacle of large numbers of Leach's Petrels from the northwest to the southwest, with an amazing 314 logged battling past Aberareron and 215 past Pendeen Watch, the majority in the southern Irish Sea and in the southwest. This spectacle was astounding stuff for a seabird more frequently encountered in good numbers during September gales as they pass from their breeding grounds on remote northern Atlantic islands through to presumed wintering areas in the regions of tropical convergences. As with many of our seabirds there is clearly much to learn about the wintering areas of this oceanic petrel. Surprisingly, only two were seen inland, one in the West Midlands and one in Yorkshire. Associated with the severe gales were small numbers of Grey Phalaropes and Bonxies and good numbers of Little Gulls, though as with the Leach's Petrels there was little evidence of birds being moved inland by the weather conditions. 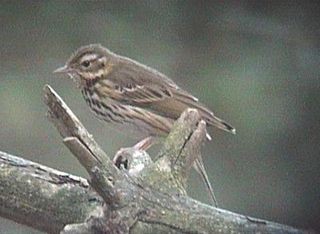 The winter keeps throwing up unusual inland rarities, so another of the unexpected finds of the winter was an Olive-backed Pipit at Lynford Arboretum (Norfolk) from the 2nd to at least the 6th February. This event is not without precedent, and for those of us with longer memories this will bring back visions of a confiding bird in gardens at Bracknell (Berkshire) from the 19th February to the 15th April 1984, which at the time was many peoples' first experience of this Siberian pipit. Another winter record was a bird on Shetland on the 3rd January 1988. Although not the rarity it once was, this is still a fantastic species and this individual was deservedly popular. It has been asked in these articles before, but how many rare birds lurk undetected in the British and Irish countryside away from the prying eyes of birdwatchers and garden-watchers? A few hundred yards in any direction and it is likely that the presence of this bird would not have had any impact upon the statistics!

After all the excitement it is comforting to know that some of our long-staying rarities remain. The Ross's Gull continues to prove popular in Devon and another was found in Galway on the 2nd, but has not been quite as obliging as the Devon bird. The long-staying Bonaparte's Gull in Cornwall has made the southwest a popular weekend break for many birders, despite the atrocious weather conditions, and the Black Duck has once again been seen in southern Devon. The Lesser Scaup was again seen in Dorset, whilst others have been seen at Lough Gill and Lough Neagh in Ireland. The Redhead looks set to see out the winter at Kenfig NNR and the Lesser Yellowlegs looks set to do the same at Pembroke. The King Eider in Norfolk, although mobile, is being well tracked along the well-watched coastline, though the Arctic Redpoll at Titchwell now appears to be occurring only erratically at the reserve. In the northeast, the Hume's Warbler remains at Newbiggin, whilst various reports of birds considered to be Siberian Chiffchaffs are regular at favourite locations.

The weekend looks set for more of the same on the weather front, so a nice bird hide overlooking your local reservoir or wetland reserve, or being sat in your car at the local rubbish tip would appear to be the driest and most comfortable way of spending your time!