Review of the Week: 9th–15th August

Another week flies by, and autumn is now upon us. A real mixed bag of weather this week saw many areas (particularly in the south and east) enjoying a warm and settled period early on, only to be replaced by the more familiar wind and rain by Wednesday. Nevertheless, the dynamic meteorological conditions had their advantages, with some productive August birding to be had along the east coast, where onshore winds delivered the first passerine migrants of the autumn.

That said, the week's highlight didn't actually come from the east. Eleonora's Falcon is one of those species that always generates huge scepticism around the British birding scene: none of the previous accepted records has ever proved twitchable, while a host of unconfirmed claims and reports in recent years has tarnished this charismatic falcon's reputation as well as placing it close to the top of many birder's 'most-wanted' list. So, when a report of a probable dark morph at Porthgwarra (Cornwall) on 11th emerged two days later, there were naturally plenty of doubters and dismissers. Then, a collage of distant record shots was posted online, and the rest was history. It sure did look like an Eleonora's and, like its six accepted predecessors, had manage to evade the masses — there was no further sign of it, despite searching, by 14th at least. 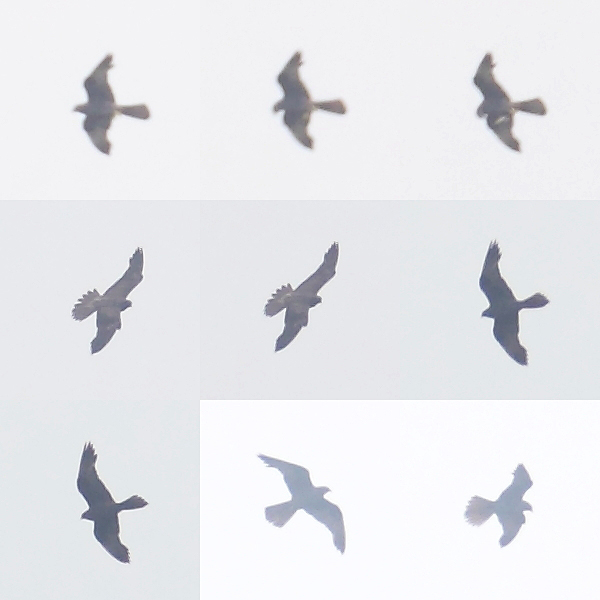 For some reason, a respectable influx of Garganey was another feature of the week. Whatever the underlying reason — the southeasterly airflow or simply the wet weather leading to an abundance of suitable breeding habitat this summer — several impressive counts were made. A remarkable 43 were noted on Cambridgeshire's Ouse Washes on 10th, with 38+ still there on 14th. In North Yorkshire, up to 16 were at Bank Island, while small parties of up to eight birds were widespread across much of England. Over in Ireland, last week's two Blue-winged Teal were still at the Wexford Wildfowl Reserve on 9th, although not since. The only report of Somerset's Ferruginous Duck came on 15th, although the bird at Minsmere continued to be noted regularly on reserve until 13th at least. Two drake Surf Scoters remained off Blackdog (Aberdeenshire) throughout. 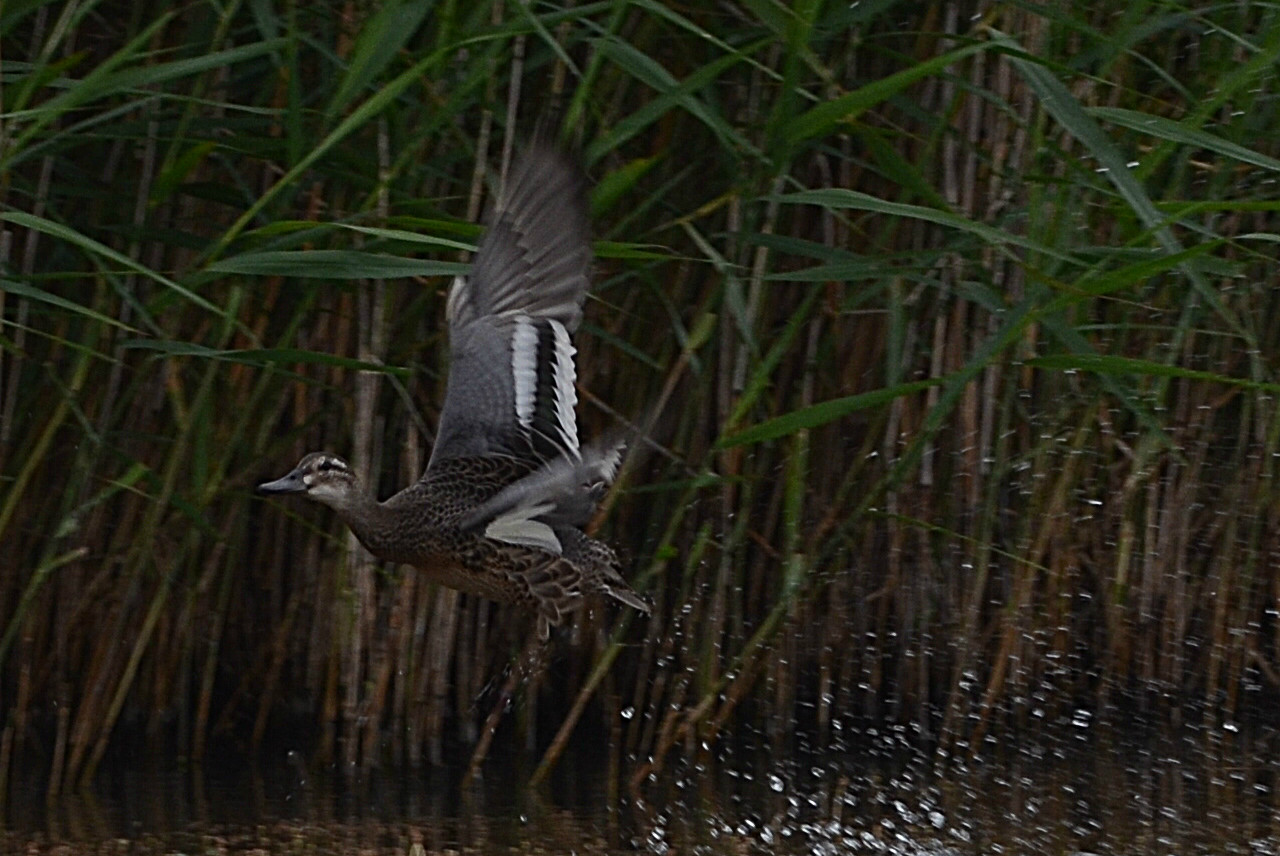 In a more settled week, it was no surprise that seabirds took more of a back seat. A couple of Wilson's Storm-petrels seen from a pelagic off Loop Head (Clare) on 12th were the overall highlight, while there was little more than a scattering of Cory's and Great Shearwaters, Sabine's Gulls and skuas, mainly in southwestern areas. Four Grey Phalaropes passed Clogher Head (Louth) on 15th. With a low pressure forecasted to hit next week, perhaps the situation will have improved next time out. 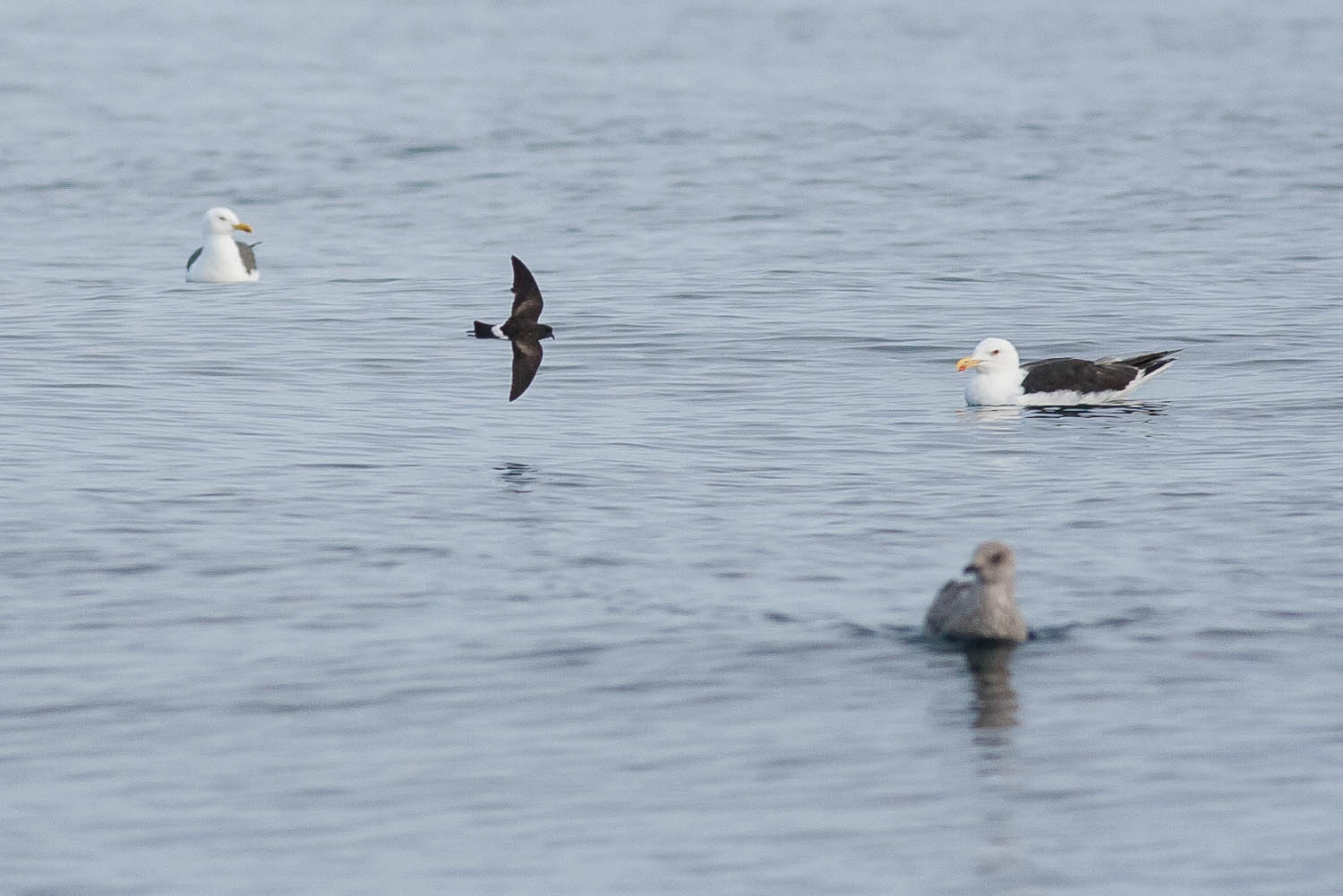 Cambridgeshire's adult Purple Heron made the short flight up the River Ouse from Sutton Gault to the RSPB reserve at Mepal, where it was present on 9th–10th. Another bird — an immature — was found on the river at Fritton Marshes (Norfolk) during the afternoon of 15th, while Hampshire's ever-present Night Heron continued to skulk on the fishing ponds at Lower Pennington for much of the week. Somerset's Great White Egret clan seemed to have dispersed; although two were still at Shapwick Heath, threes at Wet Moor and on offshore rocks at Clevedon on 10th (with two also at Chard Reservoir that day) suggested that Britain's newest family were off in search of fresh pastures. Others were at Chelmarsh Reservoir (Shropshire) on 12th and Grove Ferry (Kent) on 15th, and familiar faces were still in Worcestershire and Cheshire. A Cattle Egret was at Elmley Marshes (Kent) on 15th. 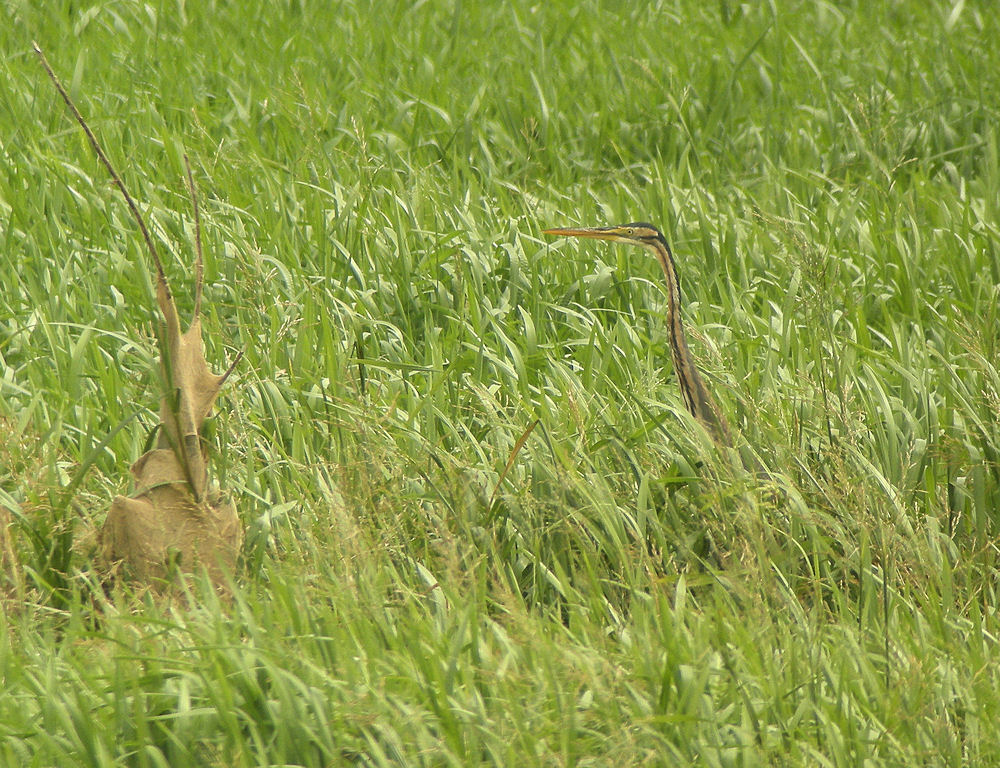 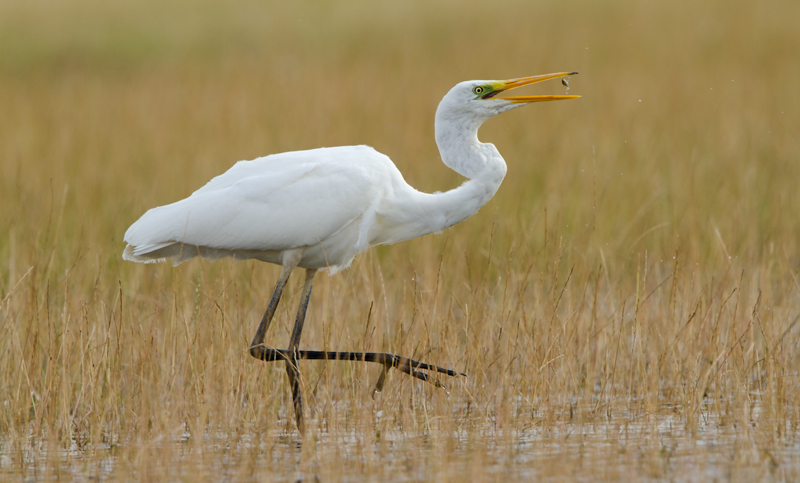 Titchwell clocked a reserve record 22 Spoonbills on 10th, with smaller numbers of birds scattered around coastal English sites. The four White Storks were again relocated on Wet Moor (Somerset) on 9th–14th; surely it will not be long before they head south once more? In contrast, long-staying Glossy Ibises in Cork, Wexford, Pembrokeshire and Suffolk are no doubt here for the long haul, while sightings in Hampshire and West Sussex perhaps relate to the recent Pagham individual. 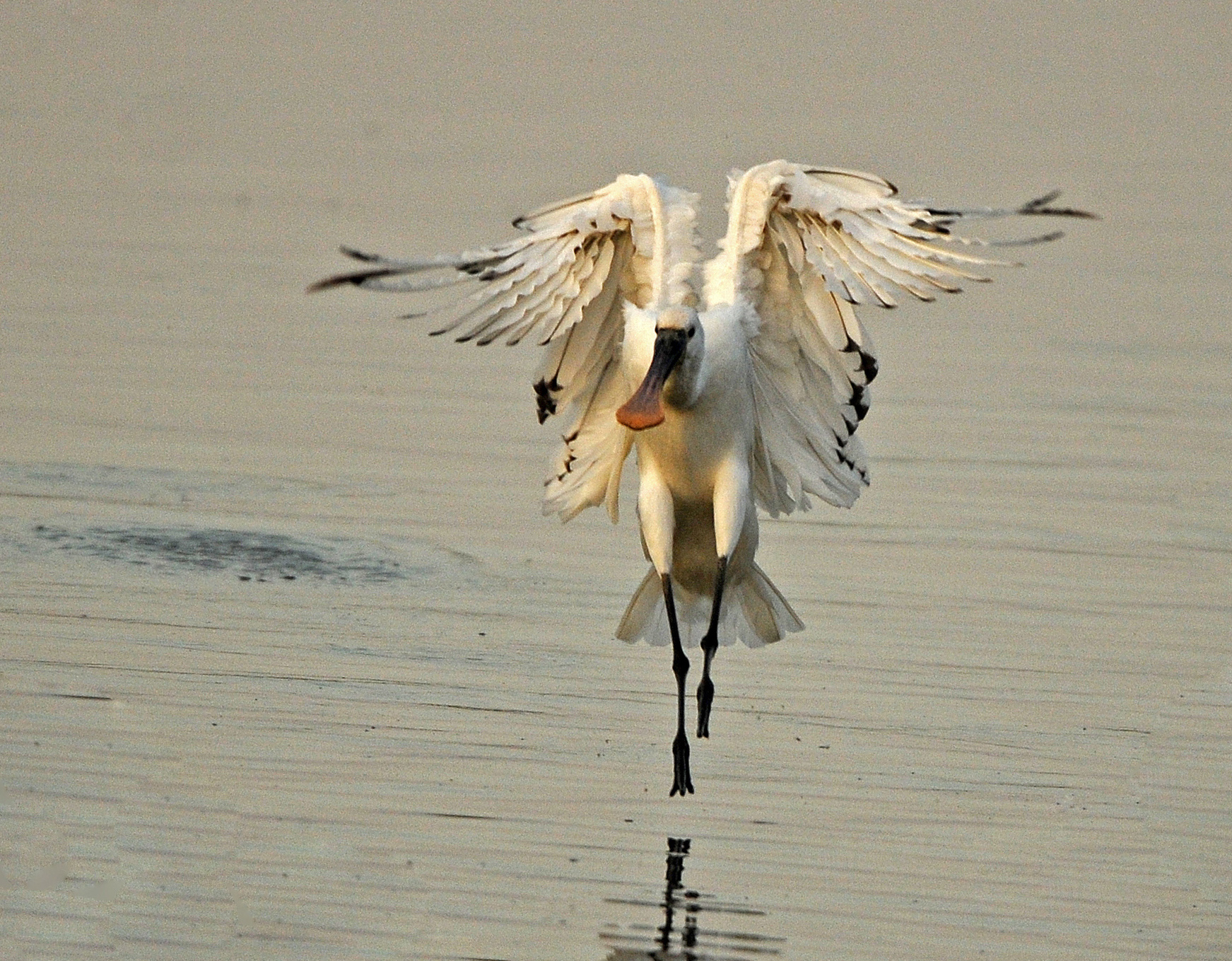 Rare raptors consisted of a juvenile Black Kite reported over Coventry (W Mids) on 11th and a first-summer Pallid Harrier high over Moyasta (Clare) the following day. In addition, small numbers of migrant Montagu's Harriers and Honey Buzzards were reported in southern and eastern areas, with the latter species still performing well from known watchpoints at breeding sites.

A Spotted Crake at Marazion (Cornwall) from 11th was trapped and ringed there on 14th; a second bird was at Stanwick Gravel Pits (Northants) during the evening of 14th only. 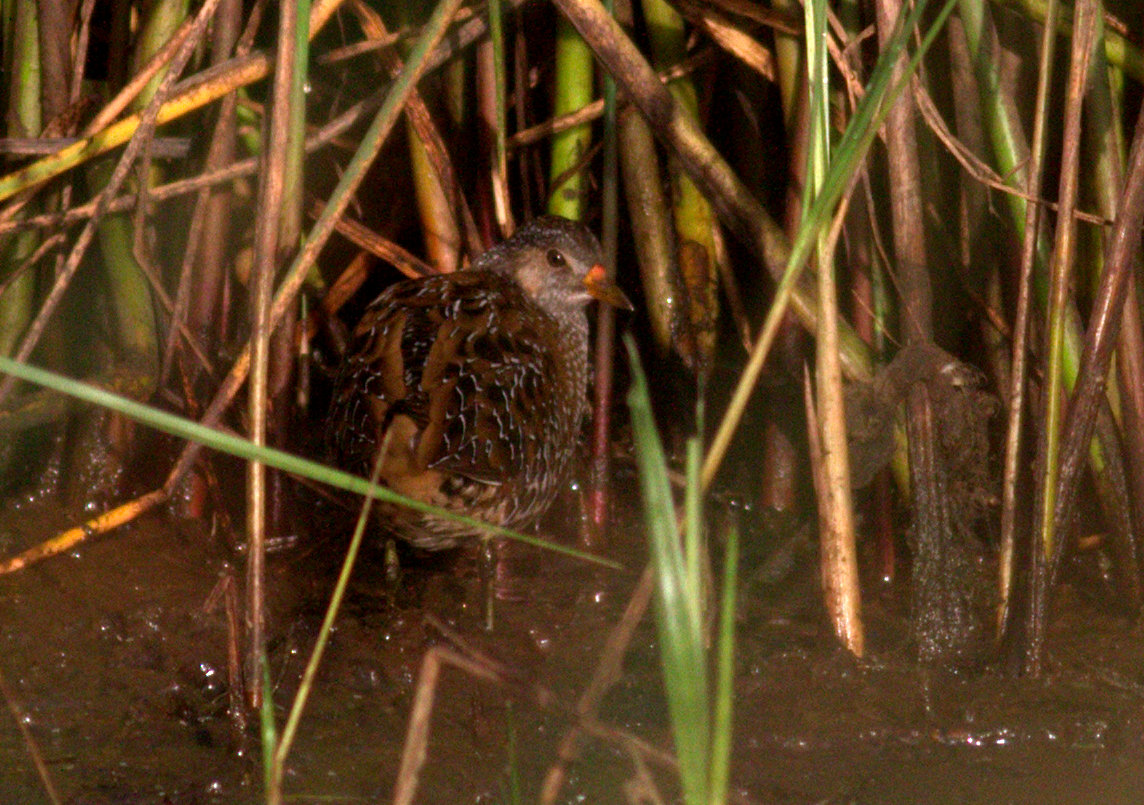 Last week's star bird — the Stilt Sandpiper at Low Newton-by-the-Sea (Northumberland) — lingered there until 9th only. Otherwise, the shorebird headline concerned a Least Sandpiper at Carrahane Strand (Kerry) on 13th. Many will recall a bird making an extended stay here late on in 2011 — could it be the same bird returning? It would be a great coincidence if not. Further Nearctic arrivals included Buff-breasted Sandpipers at Ferrybridge (Dorset) on 9th–10th and Tacumshin (Wexford) on 12th–14th, an adult White-rumped Sandpiper at Beacon Ponds (E Yorks) on 11th–13th and five Pectoral Sandpipers in Lancashire, Suffolk (2), Kent and Cornwall, in addition to the long-staying adult Long-billed Dowitcher still at Slimbridge (Glos) throughout. But waders did not just come from the west: an elusive Marsh Sandpiper was a high-quality arrival at Hickling Broad (Norfolk) on 14th, and a probable Pacific Golden Plover flew over Sunk Island (E Yorks) with a small flock of its European counterparts on 13th — perhaps this is the same bird as that heard at Spurn on 26th July? A Black-winged Stilt was reported flying over Pett Level (E Sussex) on 15th. 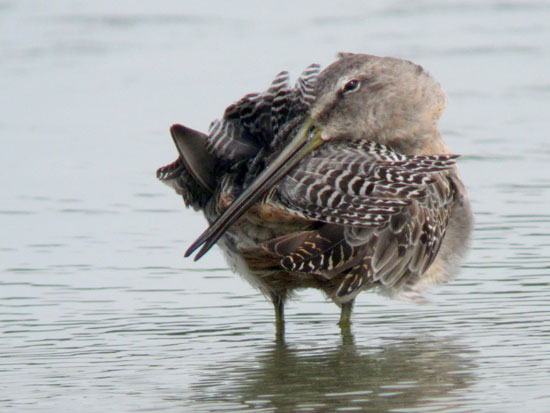 Up in Argyll, the adult Bonaparte's Gull was again on the Add Estuary to 12th. Down's Ring-billed Gull remained at Groomsport and another (an adult) was reported at Kinneil Lagoon (Forth). With an airflow stemming from the continent combining with heavy thunderstorms, a respectable arrival of Black Terns was on the cards and, true to form, an impressive flock of c.70 arrived at Farmoor Reservoir (Oxon) on 13th. Up to 20 were seen at the west London reservoirs, and flocks were widespread across many waterbodies in the Midlands. A flock of 19 Little Terns at Little Marlow Gravel Pits (Bucks) on 15th was a remarkable inland count.

Although it took a while for the birds to start flowing (just a few Pied Flycatchers early on), a prolonged spell of easterly-based winds finally began to deliver the goods as the week progressed, particularly to the northernmost parts of the British Isles. Rather predictably, it was two islands that dominated the headlines. A fall on North Ronaldsay (Orkney) on 14th produced four Barred Warblers, Greenish Warbler, Red-backed Shrike and Citrine Wagtail in addition to last week's male Black-headed Bunting, which was still there on 13th. Two further Citrine Wags were found on Fair Isle (Shetland) on 14th; a Common Rosefinch and three Barred Warblers were also there that day, and there was an Icterine Warbler there on 13th and a Wryneck on 15th. 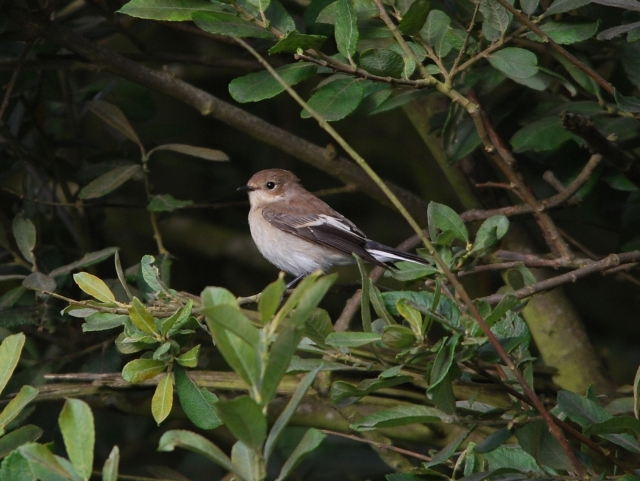 Despite the early date, it was actually Barred Warblers that predominated elsewhere on the east coast. Away from Fair Isle and North Ronaldsay, a further nine birds were located between Suffolk and Unst from 12th, five of which were north of the Scottish border. Icterine Warblers were found at Geosetter (Shetland), Mains of Slains (Aberdeenshire), the Farne Islands (Northumberland), Filey (N Yorks), Spurn (E Yorks) and Blakeney Point (Norfolk); Blakeney also claimed the only other Red-backed Shrike of the week. Wrynecks were at East Prawle (Devon), Bardsey Island (Gwynedd) and the Isle of May (Fife) on 14th, and on Blakeney Point (Norfolk) on 15th. A couple of adult Rose-coloured Starlings were reported from Urafirth and Gulberwick (both Shetland) on 11th; the first juveniles of the autumn cannot be far away now.

Down on the south coast, a couple of Melodious Warblers were somewhat predictable in their choice of location: one at Portland Bill (Dorset) on 9th inevitably ended up getting itself trapped and ringed in the observatory garden, and another was on St. Mary's (Scilly) on 14th. The year's first Aquatic Warbler was noted at South Milton Ley (Devon) on 10th; on 12th a fine juvenile was trapped and ringed at Portland Bill and another was trapped at Marazion Marsh (Cornwall). With southeast winds set to continue, perhaps we can expect a few more to be extracted from south-coast mist nets over the following few days. 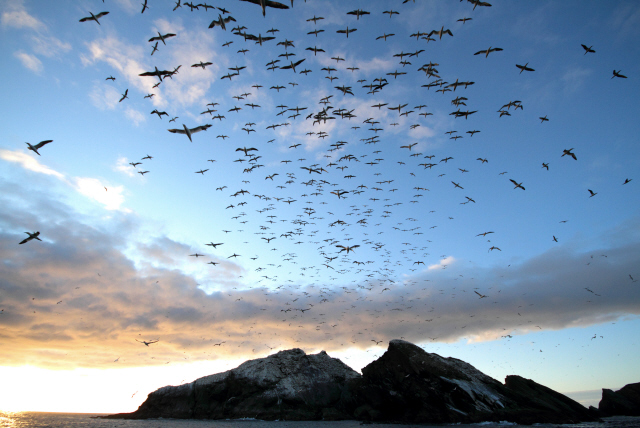 Most of the time, 'appreciating' birds involves getting close to them so that the detailed aspects of their appearance and behaviour can be seen. As a result, most bird photographers use long focal length lenses to capture the greatest possible detail to convey through their images. Sometimes, though, birds create such a wondrous spectacle that you have to put down your binoculars and relax your eye muscles, switching from straining to letting in your peripheral vision. In those moments, we are often much more tuned in to our other senses as well, forming a complete mental record of the event that we can fully recall for years to come. Since moving to the Shetland Islands four years ago, Robbie Brookes must have had a number of such moments but, as he describes on his blog, even he was moved by the sight of hundreds of Gannets streaming overhead on a sunset boat trip to Muckle Flugga. Although 'still photography' can only convey the visual sense, Robbie's use of an ultra wide angle lens was the best choice to help us imagine what it must have been like to be present in this magical moment. 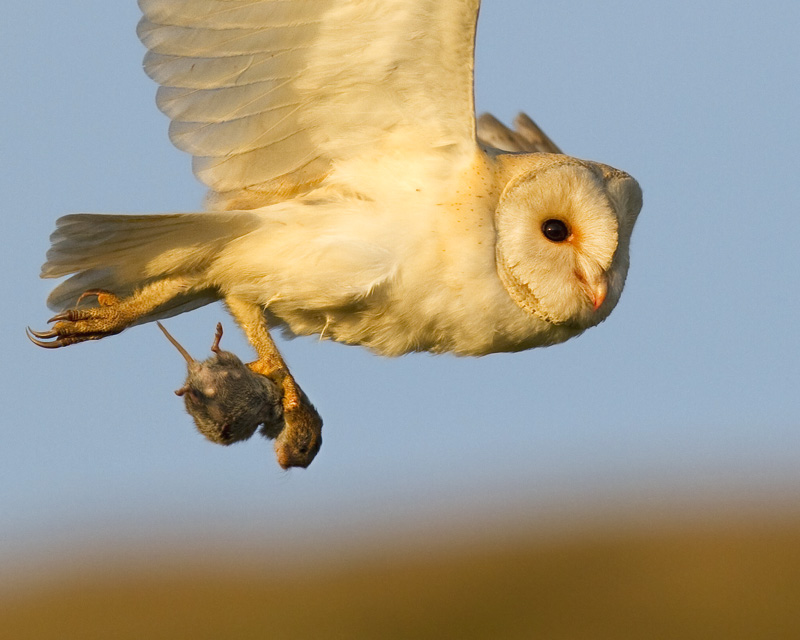 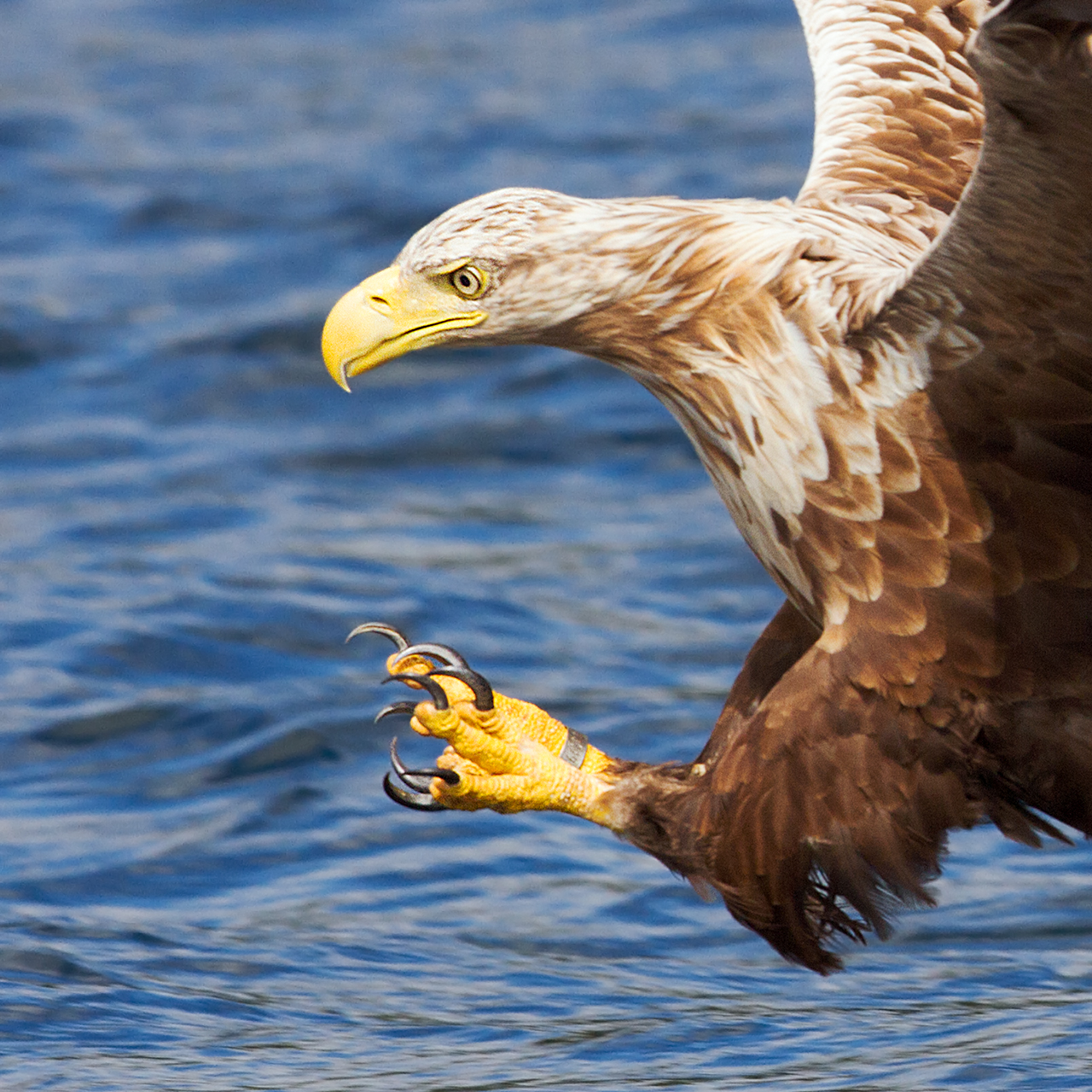 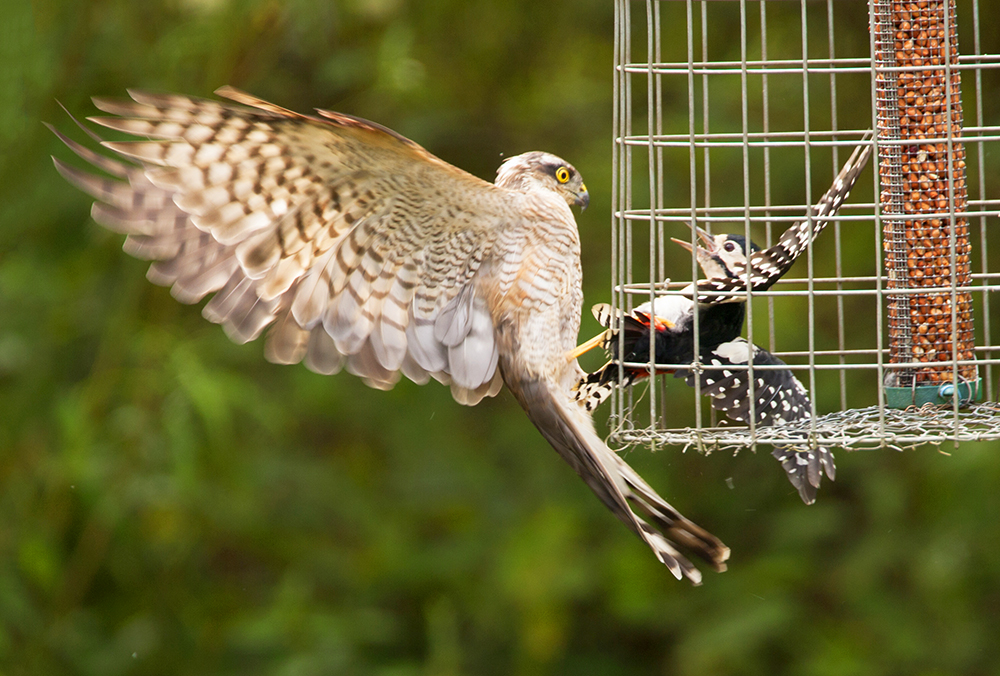 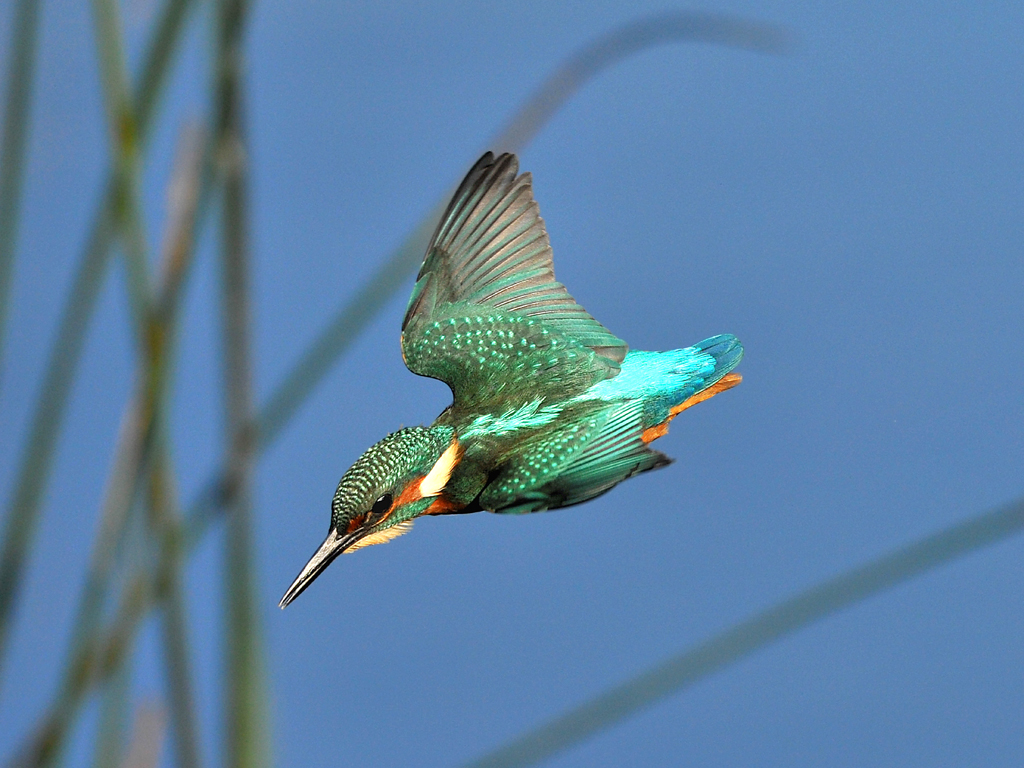 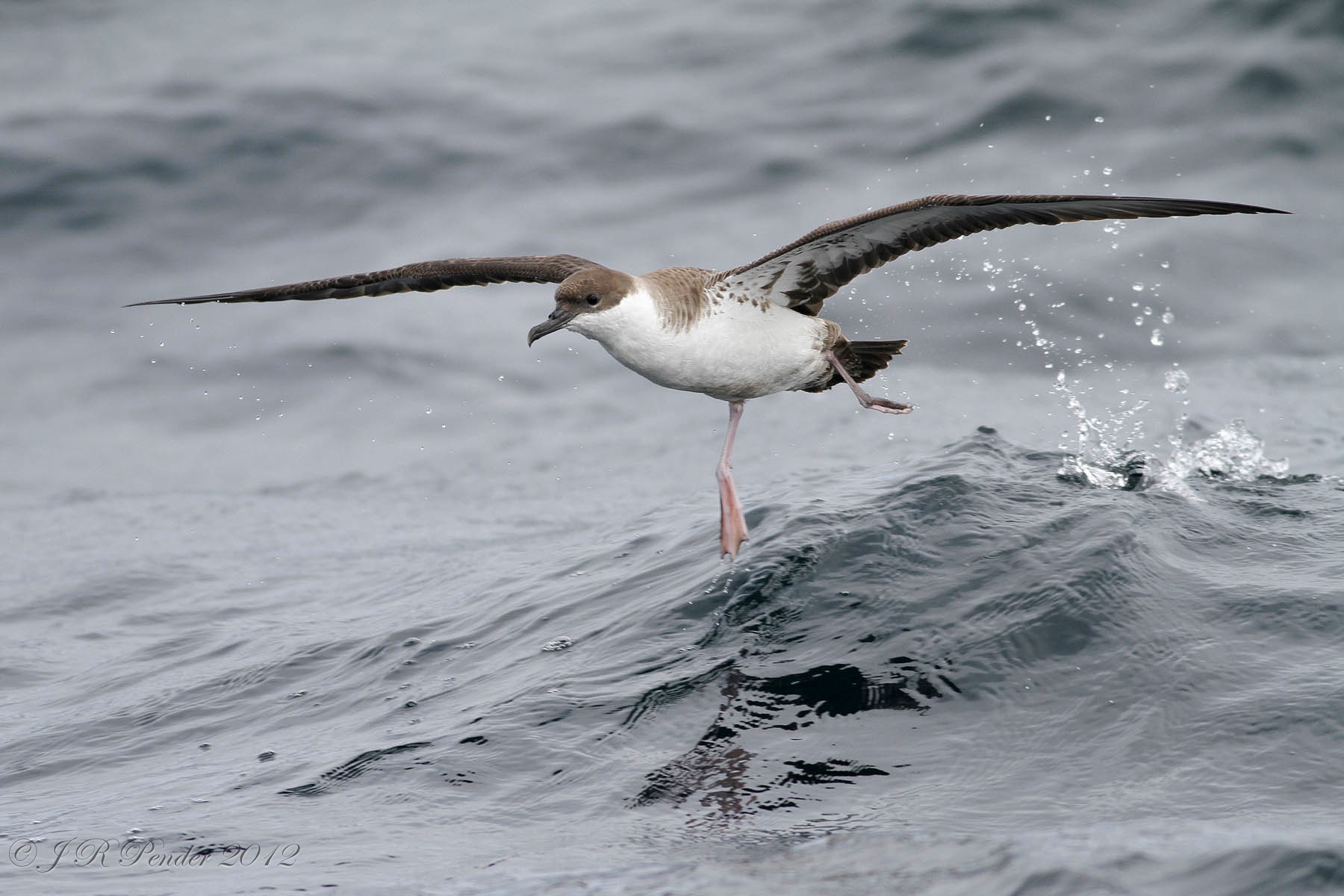 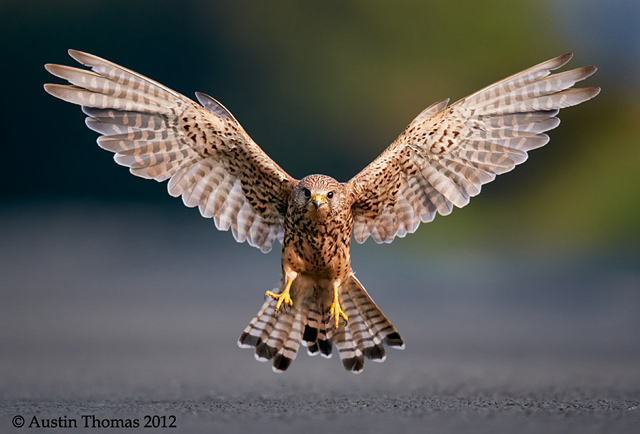 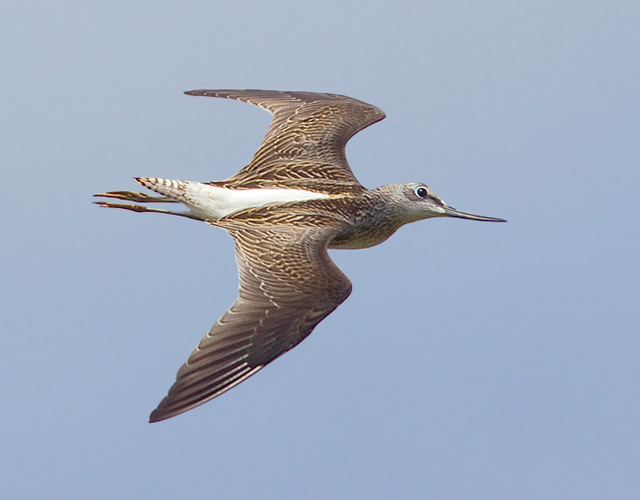 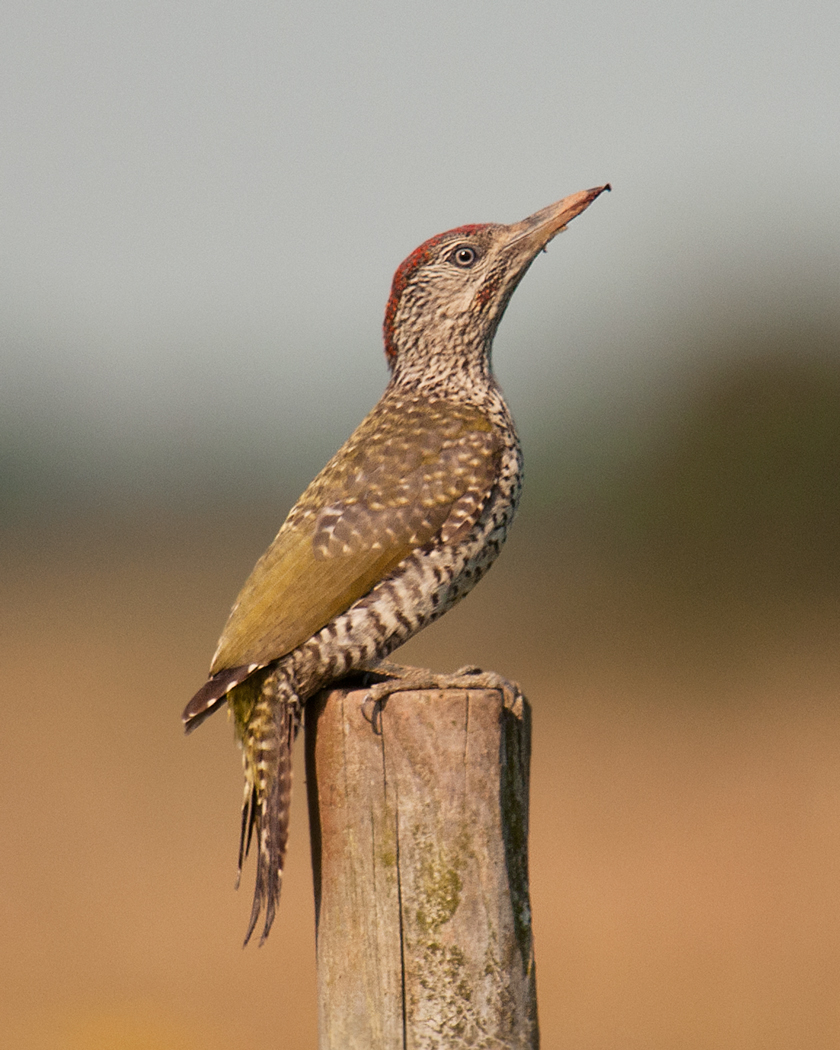 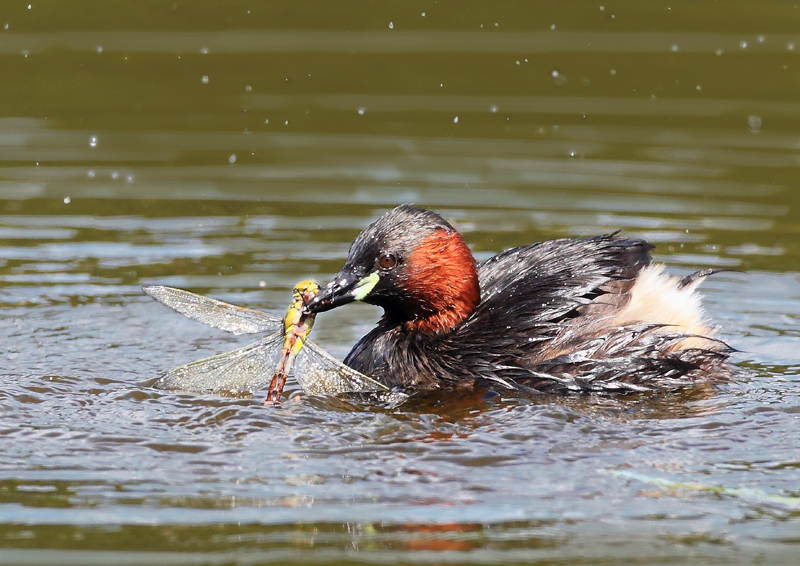 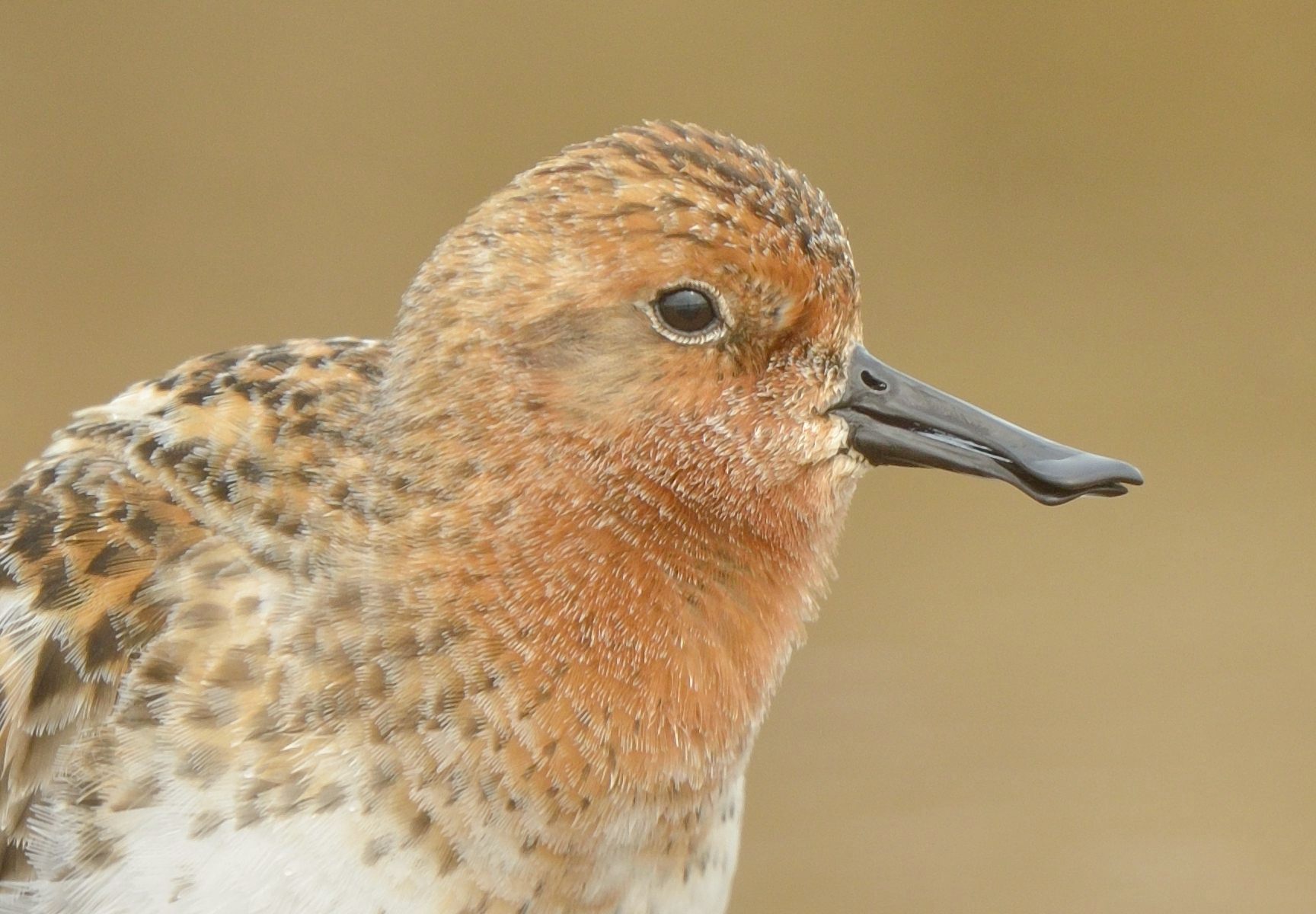 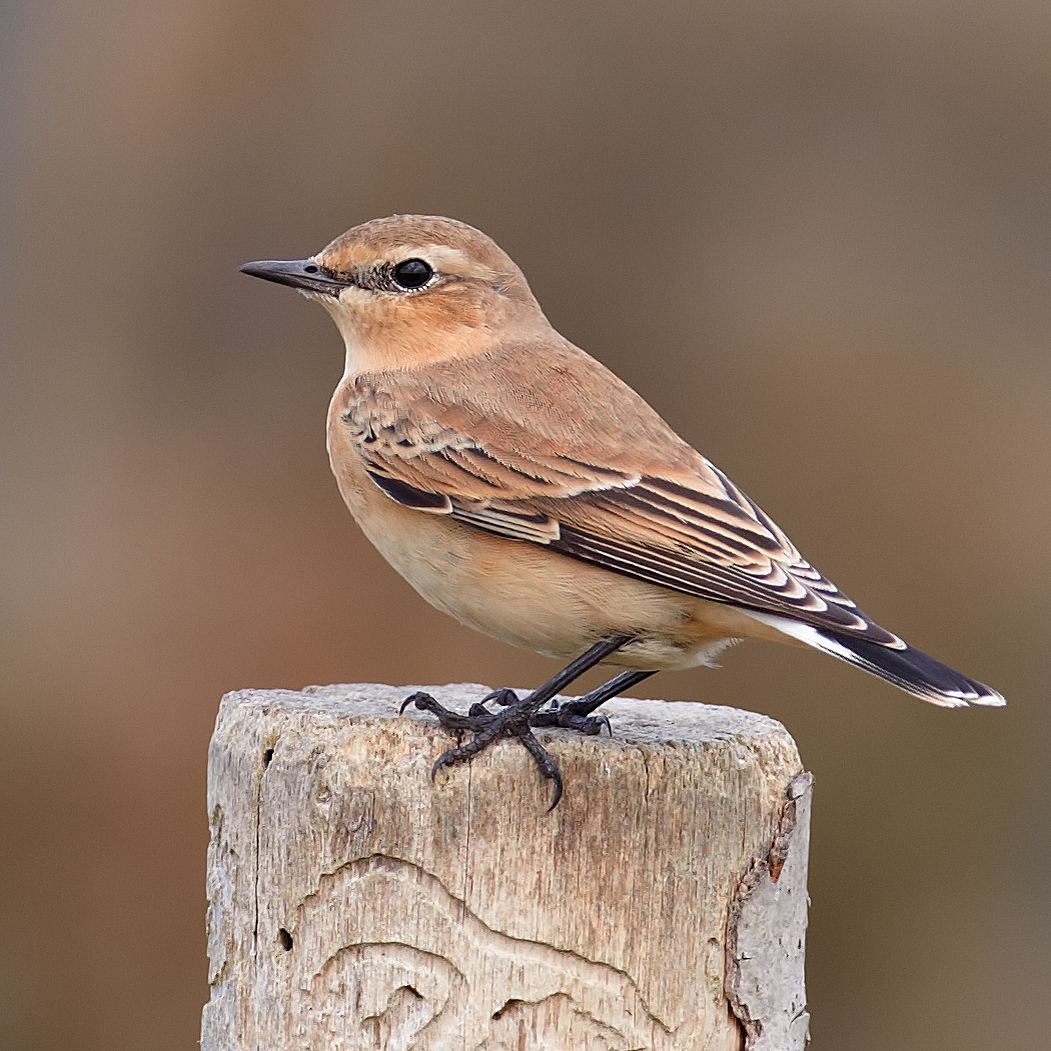