There was a distinct midwinter feel to the week, with temperatures starting to fall somewhat and bird news still coming down after the autumn highs. That said, the growing trend of overwintering summer migrants continues apace, with some 26 sites as far north as Moray still reporting Swallows. Also in the Scottish county, a single House Martin was also reported at Burghead on 8th. Waxwing numbers were arguably a little disappointing – despite some triple-figure flocks forming in eastern Scotland, it felt like we were due some more in the easterly wind. 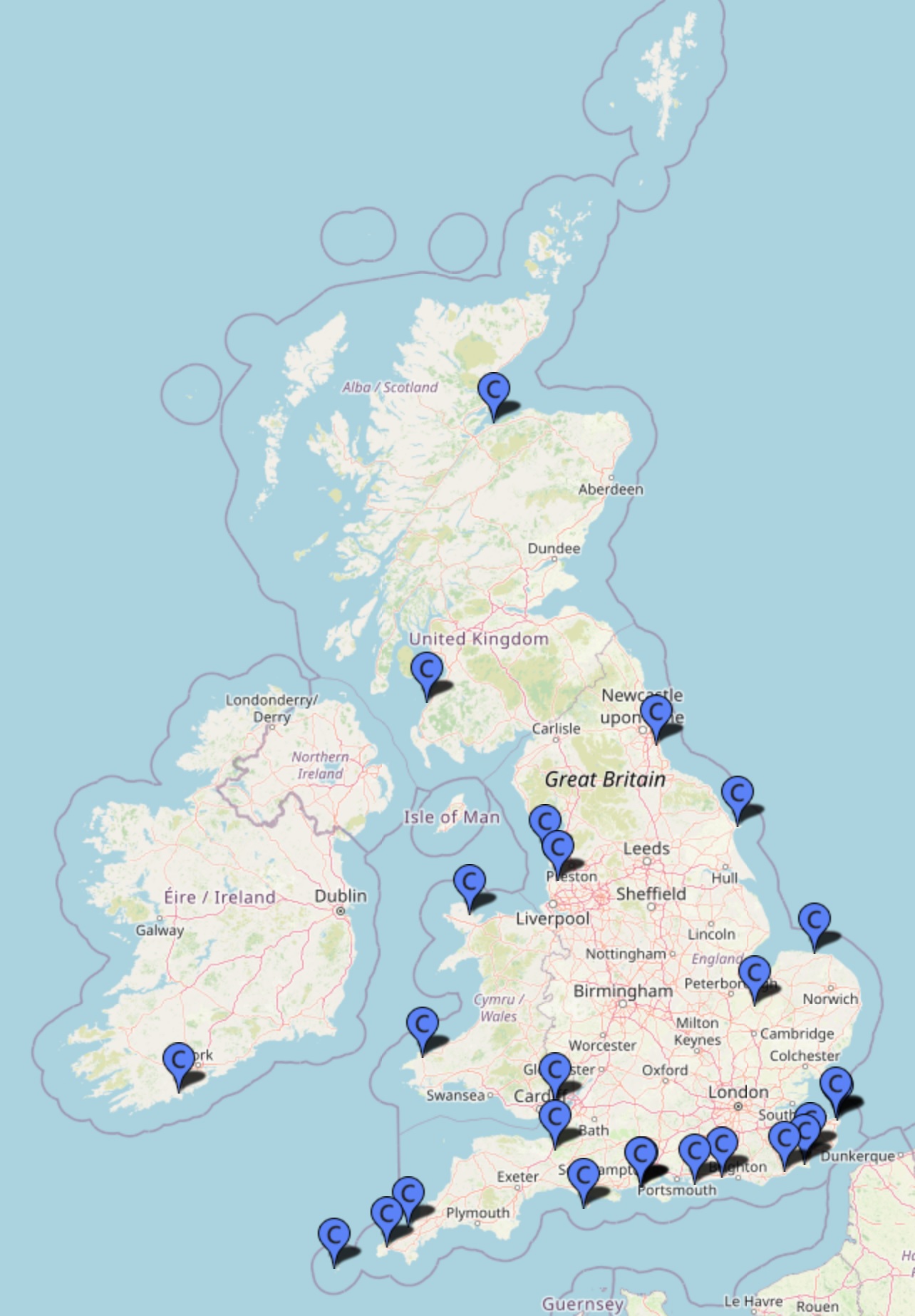 Predictably, Cheshire's White-throated Sparrow stuck around for another week. At this point you'd presume it was likely to overwinter, so long as the forecast cold weather doesn't move it on. On a more positive note than last week, the bird was seen and heard briefly along a stretch of public footpath at Poor's Wood on 2nd, giving indication the bird must occasionally foray away from the favoured private garden. Seed has been scattered in the area and, given this worked to move the 2021 East Sussex White-throated Sparrow (and the 1998 Chester Dark-eyed Junco) to public spaces, there must be a decent chance this bird will become accessible soon. Unfortunately, there was no further sign in the wood by the week's close but was still present in its favoured garden over the weekend. Twenty-four hours is far too soon to give up hope and I'd suggest patience is needed.

The Myrtle Warbler just about made it into the reporting week, and was still below St Mary's Church, Isles of Scilly, on 28th. An American Buff-bellied Pipit flew over Tremelethen on 29th. The drastic upturn in fortune for Red-flanked Bluetail has seen this species lose significance in a national sense, but this week's find deserves a bit more airtime. Inland bluetails aren't as mythical as other eastern species, perhaps because they seem to stick for longer and can be confiding, but that isn't to take away from a Peterborough record. A report of one at Deeping Lakes LWT, Lincolnshire, on 29th was followed up and later refound on the morning of 2nd, although that was to be the last time it was seen. There is a fair chance it remains unseen in the denser vegetation on site, however. This isn't to take away from the Scilly bird, which was still present on St Mary's untli at least 2nd. Secondhand news was received of a possible Egyptian Vulture at Newcastle House near Ballymahon, Co Longford, on 30th. It would surely be the bird from last winter, just 21 km north-east of the last report, if legitimate. No further reports were received thereafter – could it conceivably summered? Unlikely, but not impossible. If bird news teaches you one thing, it's that you need to be open-minded to most scenarios, so stay tuned. On to another mega that was somewhat on the back burner, the adult Double-crested Cormorant was reported again at Doon Lough, Co Leitrim, on 30th. Surely it is ever-present in the area and it's more a case of someone going there and reporting it, but it's nice to know it's still kicking about.

The drake Hooded Merganser continued to loiter around the estuary between Rosduane and Newport, Co Mayo, throughout the week but remained mobile. Another drake turned up at Dosthill NR, Staffordshire, from 29th. Sadly (or rather predictably), footage taken of the bird the following day showed a ring on its right leg, consigning this bird to the escape bin. It is potentially the known escape drake that has wintered in Staffordshire since 2019.

Further duck news concerned the drake King Eider off South Gare, Cleveland, which was still showing on 4th. Slightly better footage reveals some immaturity, making it likely to be last year's bird returning. A possible female was off Lossiemouth, Moray, on 4th. The female Ferruginous Duck was still at Aqualate Mere, Staffordshire, until 1st while up to three (one drake) remained in the Norfolk Broads. Of the 10 Green-winged Teal on the news page this week, six were new. A couple of them were moulting drakes and so caution was expressed over whether they could be the real deal or hybrids. Only time will tell. Most notable was a showy moulting bird at Elton Reservoir, Greater Manchester, on 3rd and another at Grafham Water, Cambridgeshire, from 30th, which added to the site's impressive roll-call of birds recorded this year.

Five new sites reported Ring-necked Duck this week, totalling at least 24 birds at 14 sites. Just two American Wigeon were on offer – both long-stayers – with one drake at Meare Heath, Somerset, and another still at Crook of Baldoon RSPB, Dumfries & Galloway. Drake Surf Scoter were at St Andrew's Bay, Fife, on 28th and Burghead Bay, Moray, from 2nd, with the double-act reported again off Llanddulas, Conwy, on 30th. Richardson's Cackling Geese were at three sites, with singles remaining at Lissadell, Co Sligo, and the Loch Paible area, North Uist. Another was found with Greenland White-fronted Geese at Kilmichael, Argyll, with a Todd's Canada Goose providing a great comparison. Another possible Todd's was near Walls, Mainland Shetland, on 28th. Three Black Brant were in the south, with singles at Farlington Marshes HWT, Hampshire, Seasalter, Kent, and Goathorn Point, Dorset. A Long-billed Dowitcher was found at Titchwell RSPB, Norfolk, on 4th and quick analysis of photographs reveals that the coverts and flank pattern are matches with the bird from Cley Marshes NWT. At Hanningfield Reservoir, Essex, the juvenile Spotted Sandpiper was only reported on two dates this week. Grey Phalaropes began to tail away, but birds at 14 sites is still a respectable total for the time of year. One was inland at Islesham, Cambridgeshire.

Western Cattle Egrets are an expected countryside ornament for some parts of the country, but remain very much a scarce bird in others. News of a first for the Scottish Borders at Sprouston got county birders champing at the bit, and the bird remained until at least 4th – no surprise given the bird has actually been present for two months! At least three were in Ireland. Glossy Ibis are another benefactor to the changing climate and increase in wetland habitat, and some 19 sites boasted them.

Both adult Bonaparte's Gulls lasted at Stag Rocks, Northumberland and Ballygalley, Co Antrim, while another was reported at Sunderland, Durham, briefly on 28th. The well-marked juvenile Kumlien's Gull lingered at Uyeasound, Unst, and a brief adult white-winged gull at Heydon, Cambs, on 30th was almost certainly the returning Kumlien's from recent winters. Elsewhere, nominate Iceland Gulls were at 16 sites, while Glaucous Gulls were appreciated at 12. Five Ring-billed Gulls were welcome, and included three adults at Blennerville, Co Kerry, on 3rd, when a first-winter was nearby at Black Rock Strand – hopefully the precursor to a few more on the way. An apparent adult Ring-billed × Lesser Black-backed Gull was photographed near Stone, Staffordshire, on 30th.

A juvenile Sabine's Gull was logged past Newquay, Cornwall, on 28th and two were off Sconser, Skye, on 30th. A late Long-tailed Skua flew past Spurn YWT, East Yorkshire, on 3rd and three Leach's Storm Petrels were noted off the South-West Approaches.

Bird of prey news was scant, the juvenile Pallid Harrier was last noted off Warham Greens, Norfolk, on 1st and three Rough-legged Buzzards were split between Suffolk, North Yorkshire and Orkney. An unseasonal Black Kite flew in off the sea at Holmpton, East Yorkshire, on 1st.

Another new Great Grey Shrike was reported in the week, with one at Harwood Forest, Northumberland, on 3rd. Otherwise, it was lingering birds at Methwold, Norfolk, until 28th and Pig Bush, Hampshire, until 30th that entertained birders.

At least four Eurasian Penduline Tits were still on offer at West Rise Marsh, East Sussex, although became more elusive by the week's end. A brief juvenile Red-rumped Swallow was a surprise find at Sheringham, Norfolk, on 28th. The European Turtle Dove continued to be a regular garden visitor in Lisburn, Co Antrim. Two Hume's Leaf Warblers were at Low Newton-by-the-Sea, Northumberland, on 28th and at least one remained present until 3rd. Another was at Brancaster, Norfolk, from 29th. One Pallas's Warbler made the news page, with an elusive individual at Portland, Dorset, from 30-1st. It was another good showing for Dusky Warblers in the far South-West. An untold number continued to reside on St Mary's while Tresco boasted one of its own. At least one was at Nanjizal Valley, Cornwall, and another at Polgigga. Others were at South Galson, Lewis, from 30th, and Bradford on Avon, Somerset, on 4th. Two extralimital Cetti's Warblers were on offer. One remained at Tacumshin, Co Wexford, until at least 2nd while another was just outside of Rosyth, Fife, from 3rd. Cetti's remains very much a rare bird for Scotland, although this year alone has offered a handful of records and it can't be long till the southernmost regions of the country see their first breeding attempt. A putative Siberian Lesser Whitethroat was at Carnon Downs, Cornwall, on 29th while another Lesser Whitethroat at Exmouth, Devon, escaped a label. A Barred Warbler was at Tarmon, Co Mayo, on 4th – a great county bird.

Sadly, Wales's Isabelline Wheatear was last reported on 1st. That same day, the Red-throated Pipit reappeared at Nanjizal Valley, Cornwall. Four Richard's Pipits were logged, with one again on Skokholm, Pembrokeshire, on 29th and the first-winter still on St Mary's, Scilly, until 30th. One flew over Rhoscolyn, Anglesey, on 1st and another overflew Butterstreet Cove, Dorset, on 3rd. Up to 12 Shore Larks continued at their favoured haunt at Holkham Gap, Norfolk, a single was at Salthouse and three lingered at Beacon Ponds, East Yorkshire. A Little Bunting was on Fair Isle on 29th and 30th, and another was reported sporadically at Cot Valley, Cornwall, through the week. Most notable, however, was one in Worcester Park, Surrey, from 30th. A European Serin flew over North Foreland, Kent, on 29th with the male still visiting a garden at Eigg, Highland, until the same date. At least two remained on St Mary's, Scilly. A Common Rosefinch was trapped and ringed at Kilmuir, Skye, on 29th. A juvenile American Herring Gull was at Eyrarbakki, Iceland, on 2nd. The country also hosted its fifth Black-throated Thrush, with a male at Höfn on 28th. In Sweden, a male Pine Bunting was at Nordanås from 30th. Some late news surfaced from Latvia, with the country seeing its third and fourth Stejneger's Scoter and second Black Scoter records, all from Kolka, in late October.

Hungary's Sandhill Crane was last noted over Debrecen on 29th, while Albania recorded its first-ever Snow Bunting at Durrës on 27th. An African Crake was taken into care at Eilat on 29th – the second record for Israel. The adult Verreaux's Eagle remained in the mountains to the north and was joined by a second from 3rd.

In Germany, the Red-breasted Nuthatch remained at Tönsheider Wald. The country's third Syrian Woodpecker was found by a local 17-year-old birder at Frankfurt an der Oder midweek, remaining in allotments there until at least 3rd.

Photographs of a Siberian Thrush taken at Zoetermeer on 14 November teased Dutch birders. Over the border, the female-type White-headed Duck continued at Marais d'Harchies, Belgium, and the male Pine Bunting lasted at Assent.

France enjoyed another scattering of American vagrants, with a Forster's Tern at Plouguerneau on 2nd, plus a drake Hooded Merganser and Pied-billed Grebe new at Noirmoutier-en-l'Île on 4th. The juvenile Northern Harrier cropped up again on Ouessant on 4th. An Alpine Accentor was on the north coast at Mont-Saint-Michel on 3rd, and the Long-legged Buzzard was still at Thibie. In Spain, the drake American Black Duck was still reported on 3rd.