It doesn't seem that a quiet week is going to be possible as 2013 draws to a close. The days may now be approaching their shortest, with many areas suffocating under a grey blanket of cloud for at least part of this week (if you're in London, like us, it's been like that every day). But still, top-drawer rarities continue to appear nationwide. Admittedly, this week's offerings were a little more seasonal as we moved into December, but that most certainly didn't detract from their popularity.

Arguably the week's biggest bird was a smart drake Baikal Teal, discovered at Crossens Outer Marsh (Lancs) on 30th November. It went on to spend much of the rest of the review period in a creek at the south-east end of the marsh, often showing reasonably well among a group of Wigeon and Teal. After initial confusion regarding a possible hybrid seen on site the previous week (and plenty of discussion about the lack of the vertical black line through the face), it appears that this bird's appearance is well within range for Baikal Teal in early winter and, as better photos emerged later in the week, it appears that the ghost of a dark line is indeed beginning to appear as it completes its moult. 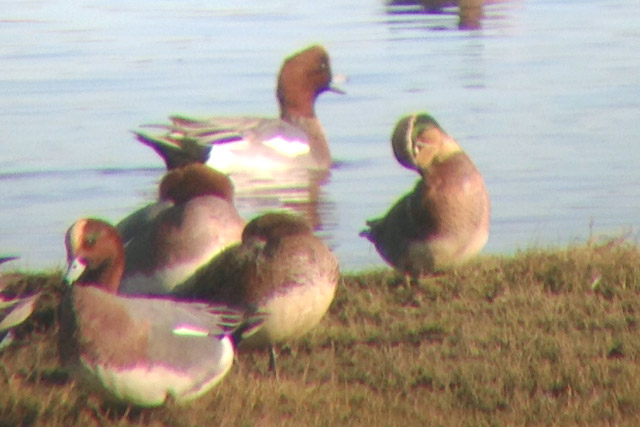 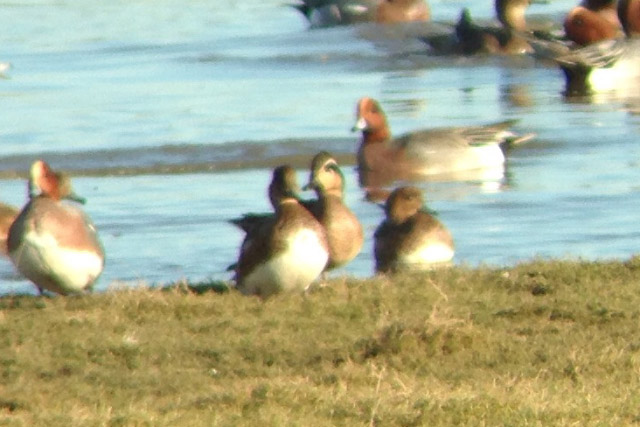 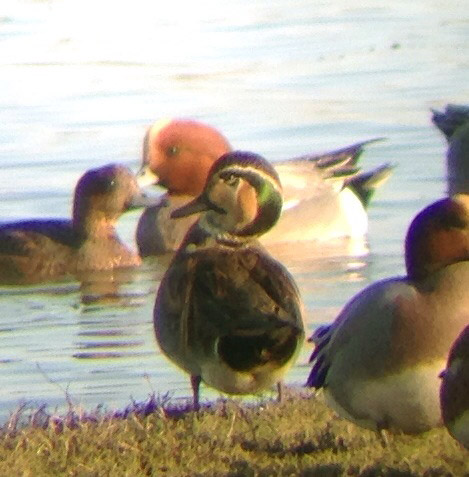 The east coast laid claim to a couple of A-list Arctic rarities during the week. The first of these was a fly-by only: a first-winter Ivory Gull, which floated north past Seaburn (Durham) on 30th and provided a stark reminder that it's been a long old time since a truly twitchable and cooperative, mainland British record entertained the masses — think winter 2004/05 at the Kyle of Tongue, though of course, Ireland enjoyed a showy first-winter in County Cork as recently as March 2009.

The second of these was a Brünnich's Guillemot found by Filey stalwart and BirdGuides contributor Mark Pearson. Hanging around for fractionally longer than the gull, the guillemot performed for just a few minutes off Filey seafront late afternoon on 3rd before vanishing in the interim as the observer went off to ring other local birders. There has been no sign so far this morning. 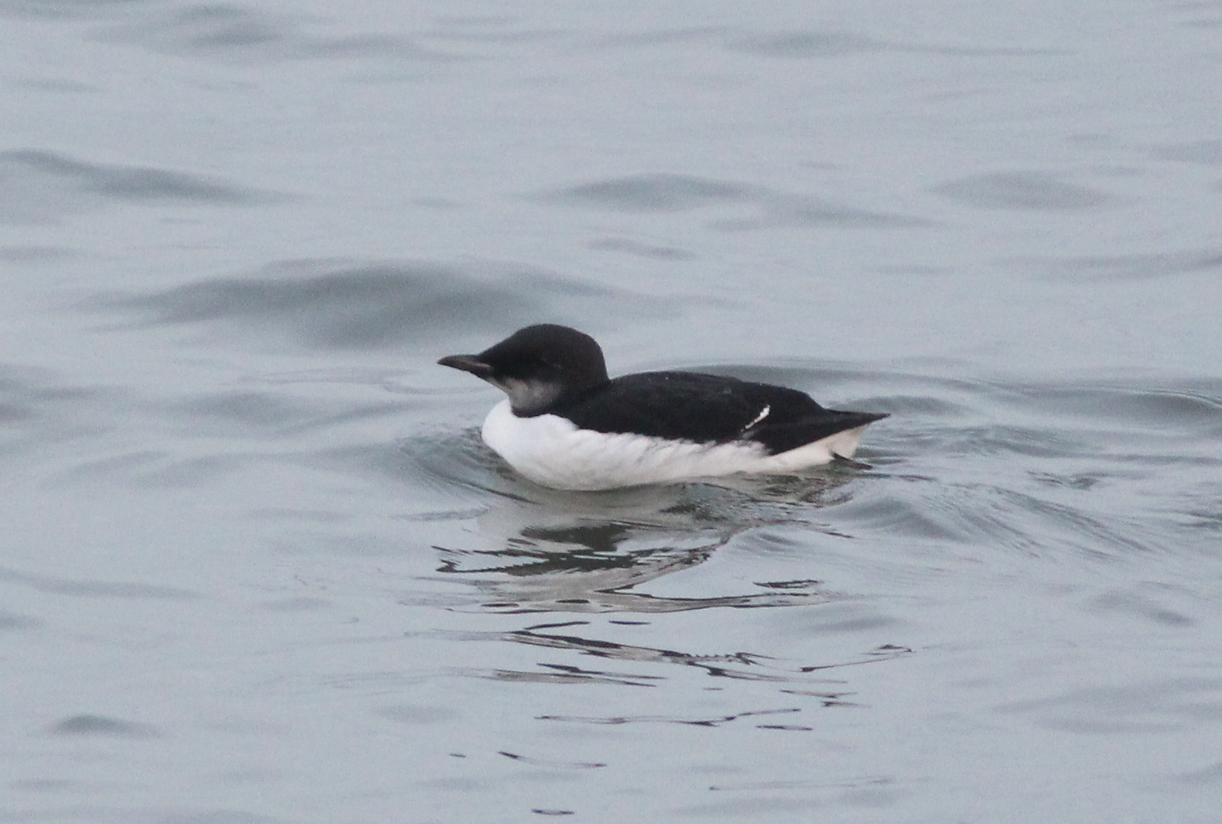 In addition to this series of wintry arrivals, a number of lingering highlights continued to draw admirers to their chosen localities across Britain and Ireland. In the far south-west, the young male Caspian Stonechat continued to frequent the sheltered, insect-filled sanctuary of St Warna's Cove on St Agnes (Scilly) throughout the week, and could well winter there — at least until cold weather sets in. The American Robin also continued to brighten up South Uist birders' days, lingering at South Loch Eynort throughout the week, though the Pacific Diver was last seen off Pendower Beach (Cornwall) on 27th.

A nice selection of rare and scarce geese are currently on offer around Britain and Ireland, with two white-morph Snow Geese at Loch of Strathbeg (Aberdeenshire) on 29th and then at Loch of Skene on 2nd, two still at Rhunahaorine (Argyll), a blue morph over Loch of Kinnordy (Angus & Dundee) on 30th and then at Mains of Ballindarg from 1st, and the white morph still at Carrahane Strand (Kerry). The Ross's Goose of unknown origin continued at Marshside (Lancs) throughout the week, the escaped Red-breasted Goose moved to Caerlaverock (Dumfries & Galloway) on 28th, a Richardson's Canada Goose was back in County Sligo on 28th–29th, apparent Grey-bellied Brants were at Dundrum Bay (Down) from 1st and still near Bull Island (Dublin) to 27th, and over a dozen Black Brants included three together at Burnham on Crouch (Essex) on 1st. 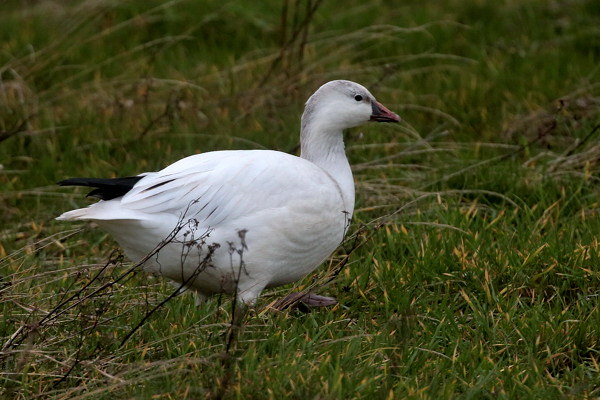 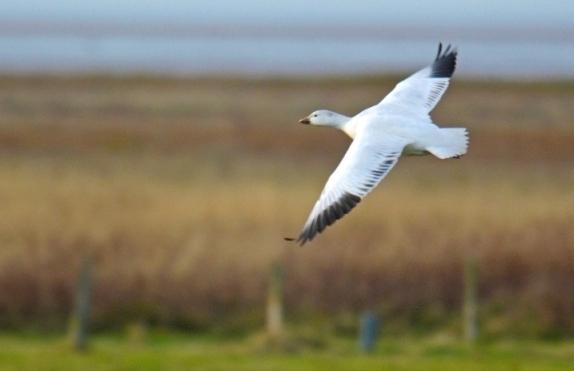 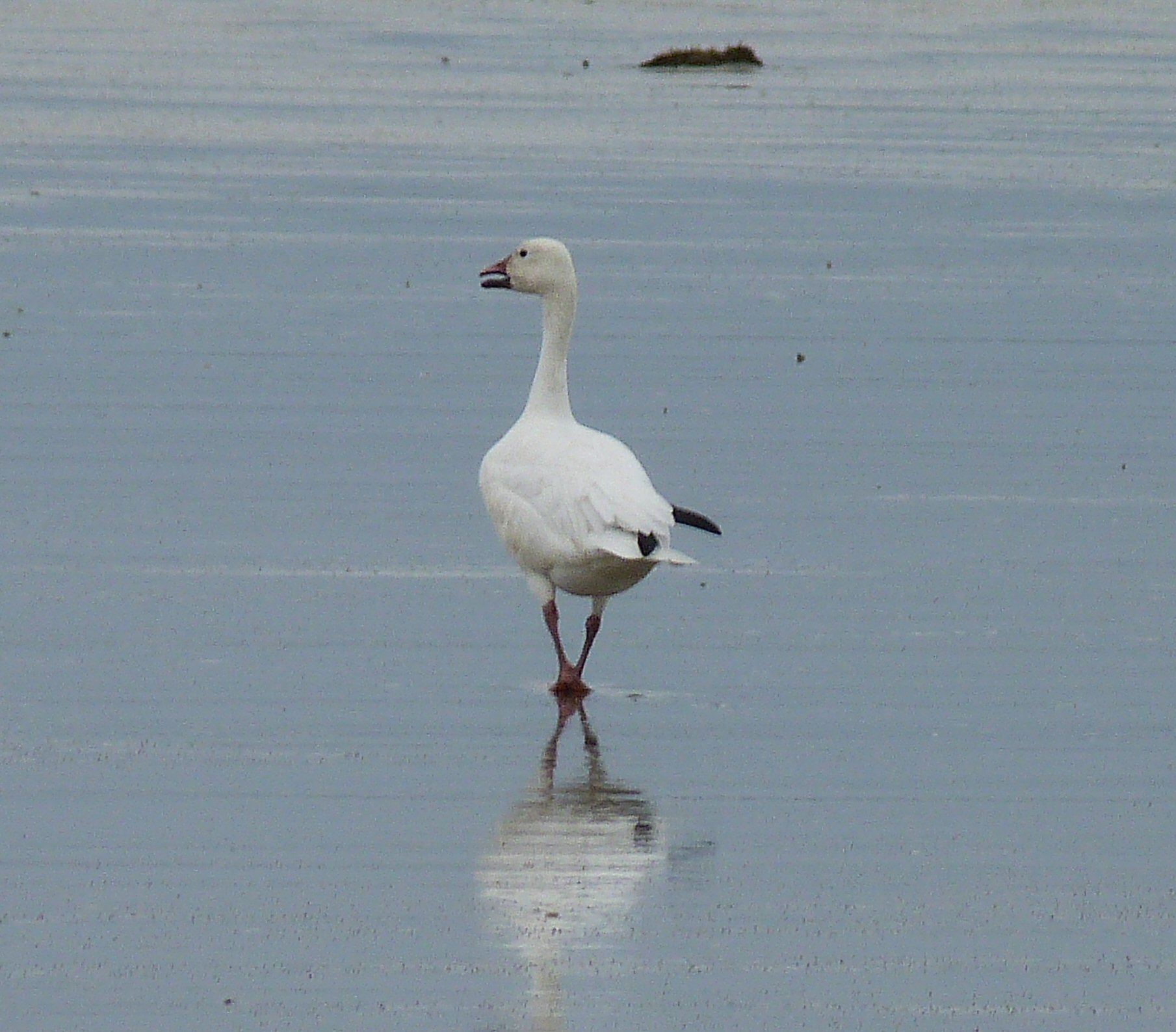 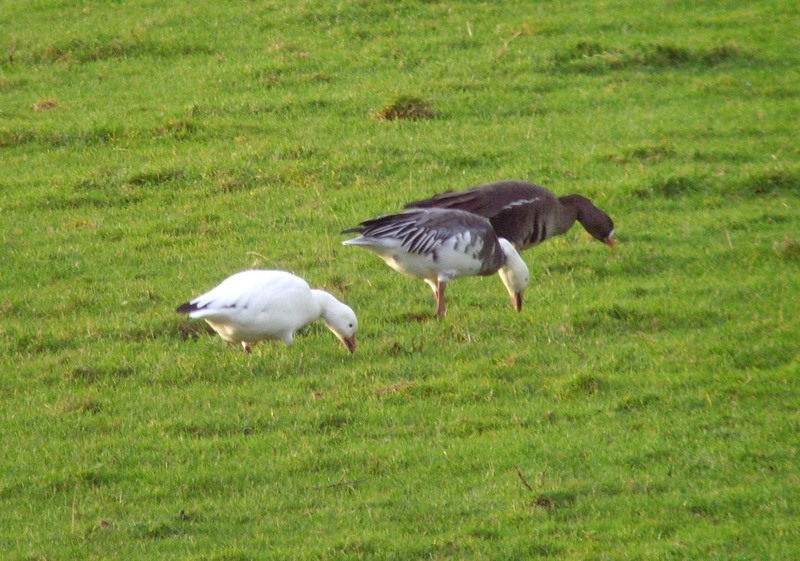 A first-winter female Lesser Scaup was new in at Lough Leane (Kerry) on 28th, with the drake (and a female Ring-necked Duck) still in the county at Lough Gill on 30th and lingering birds still at Ballyconneely (Galway), Cardiff Bay (Glamorgan) and on South Uist. A drake Ring-necked Duck was at Parasee Lake (Cavan) on 28th, with another again near Castleward (Down) on 1st. The drake Ferruginous Duck was also still in Hampshire, at Blashford Lakes on 28th. 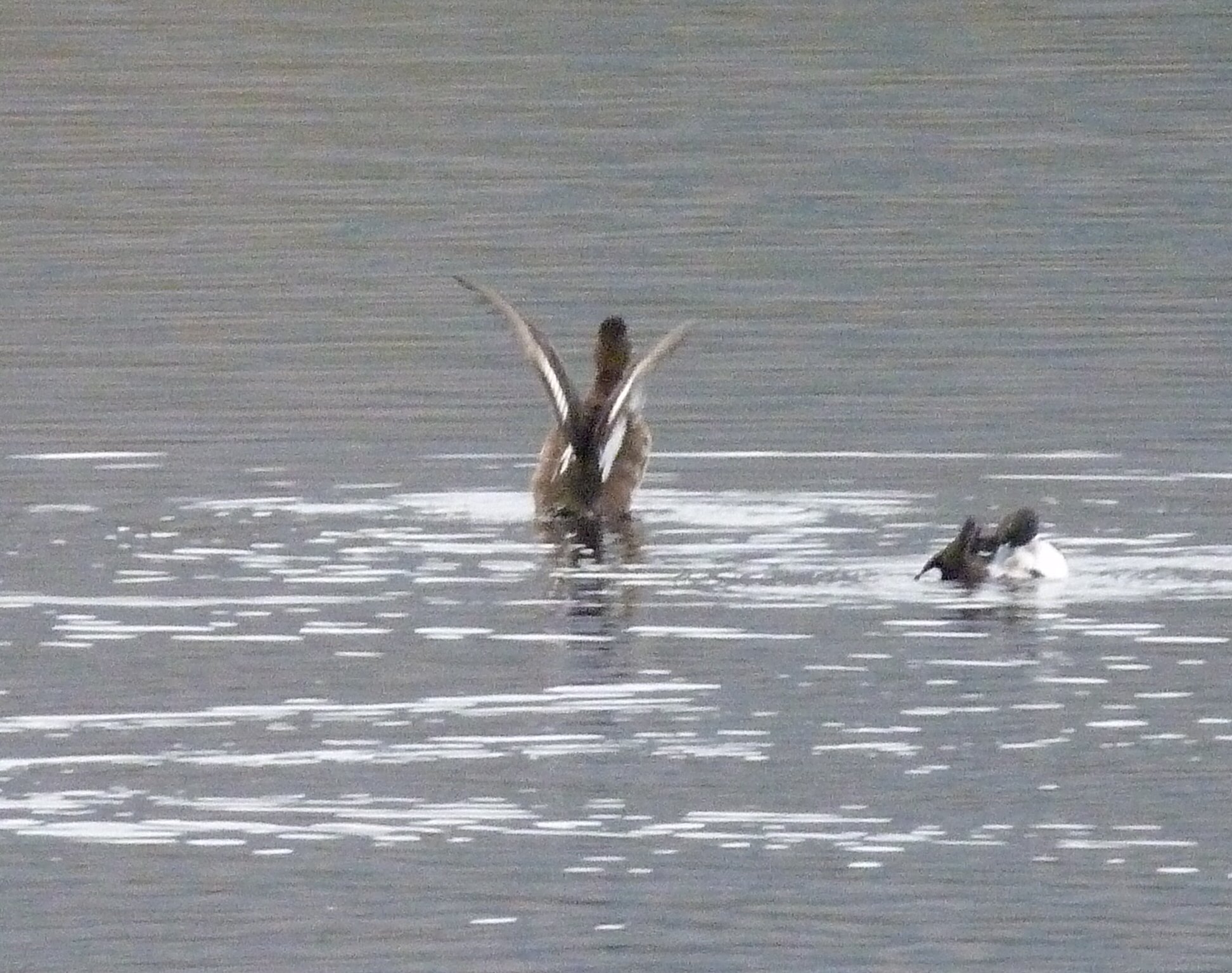 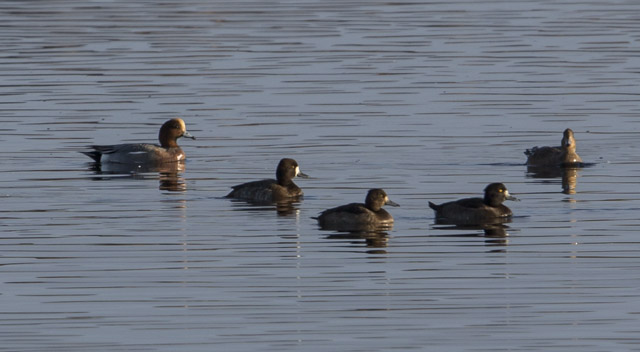 They have been scarce in recent times, so it was a refreshing change to see five American Wigeon reported during the week: one was at Burton Marsh (Cheshire) on 30th, with drakes still on Lough Neagh (Armagh), at Tullaghan (Leitrim), Udale Bay (Highland) and Loch of Strathbeg (Aberdeenshire). New Green-winged Teal were at Loch a'Phuill, Tiree (Argyll) and Milton (Pembrokeshire) on 27th, and at Hickling Broad (Norfolk) on 1st, with lingering birds still at Rutland Water, in Dumfries & Galloway, Perth & Kinross, Angus & Dundee and on North Ronaldsay.

A drake Surf Scoter was off Curracloe (Wexford) on 30th and a female was again in Brandon Bay (Kerry) on 1st; two or three drakes were in Conwy Bay on 30th, with two off Black Rock Sands (Gwynedd) from 27th and singles still in Cork (2) and Dorset. The female King Eider was still off Blacksod (Mayo) on 30th.

Rather bizarre must have been the sight of a late Purple Heron in Norfolk on 27th–28th. After first flying over Cley, it spent some time at Holkham on 27th but was seen flying over Titchwell and Holme the following day. As many as 25 Great White Egrets were seen across England and Wales, with threes at Dungeness (Kent) and Rye Harbour (E Sussex), twos in Northamptonshire, East Yorkshire and Lancashire, and one as far north as Bowness-on-Solway (Cumbria). A Cattle Egret roosted at Calvert Lakes (Bucks) on 2nd and 3rd, with another near Upstreet (Kent) on 28th–30th and the Northern Irish bird still at Hillsborough Lake (Down) on 1st. Just five Glossy Ibis were seen: at Chew Valley Lake (Somerset), Maldon (Essex) from 30th, Middlebere (Dorset) and Tacumshin (Wexford) in addition to one as far north as Carinish (North Uist) on 3rd. 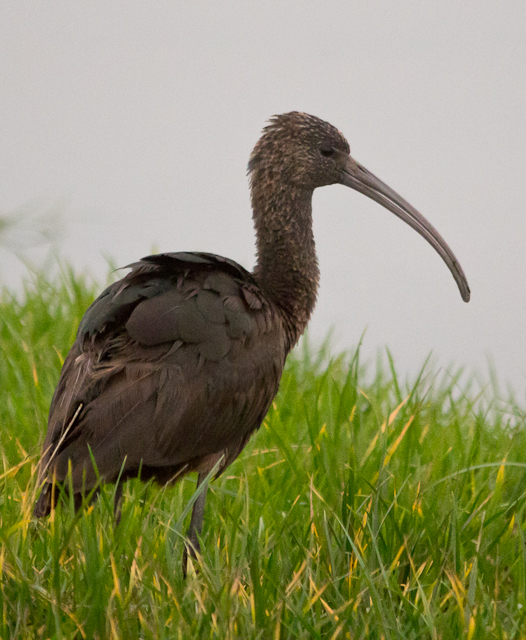 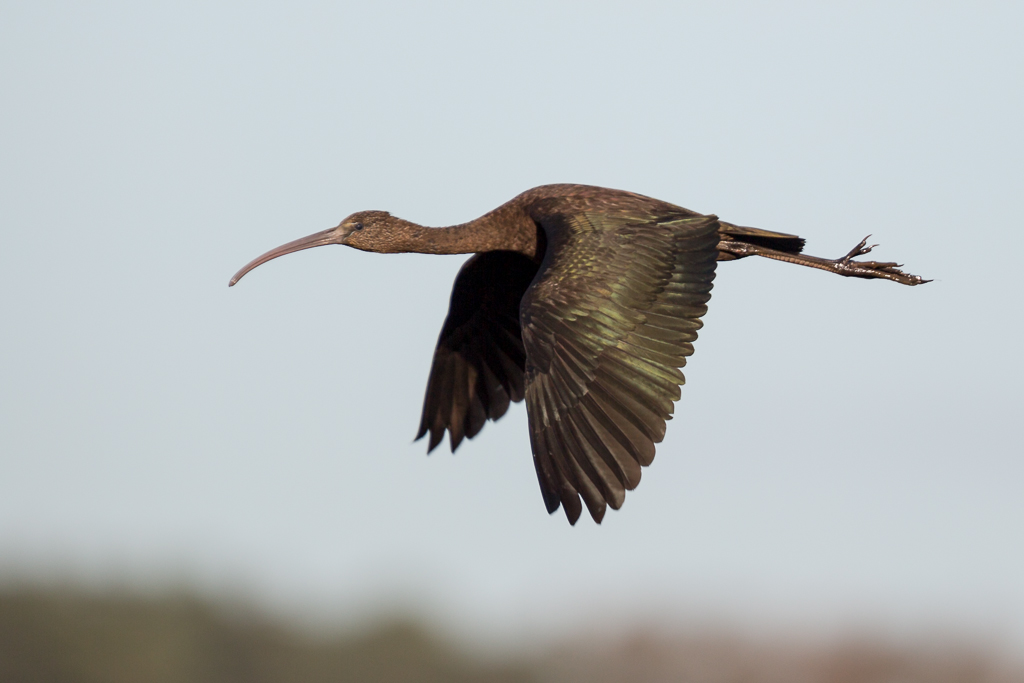 Raptors included the white-morph Gyr Falcon again seen at the far western end of the Dingle Peninsula, flying into the valley at Dunquin late on 28th. An orangey juvenile harrier at Eldernell (Cambs) on 29th and 1st may or may not have been the recent apparent Northern Harrier seen on the Ouse Washes. In Suffolk, the Rough-legged Buzzard continued at Orford Ness, and there were further reports from Essex and Lothian.

Scarce waders were typically sparse, though the American Golden Plover at Sennen (Cornwall) and Lesser Yellowlegs at Lepe (Hants) lingered all week, and the Pectoral Sandpiper was seen again on Lough Neagh (Armagh) on 30th.

Devon's Bonaparte's Gull continued to frequent the seafront at Dawlish to at least 29th; meanwhile what could well be the possible American Herring Gull seen on the Hayle Estuary (Cornwall) in October was noted at Drift Reservoir on 30th–1st. Ten Ring-billed Gulls were split 7:2:1 between Ireland, England and Wales. The Welsh bird was presumably the returning adult in the Llys-y-Fran Reservoir roost on 1st, with English birds at Moore (Cheshire) and Gosport (Hants). In Ireland, twos were at Tralee (Kerry) and Nimmo's Pier (Galway), the latter site again hosting the Forster's Tern. 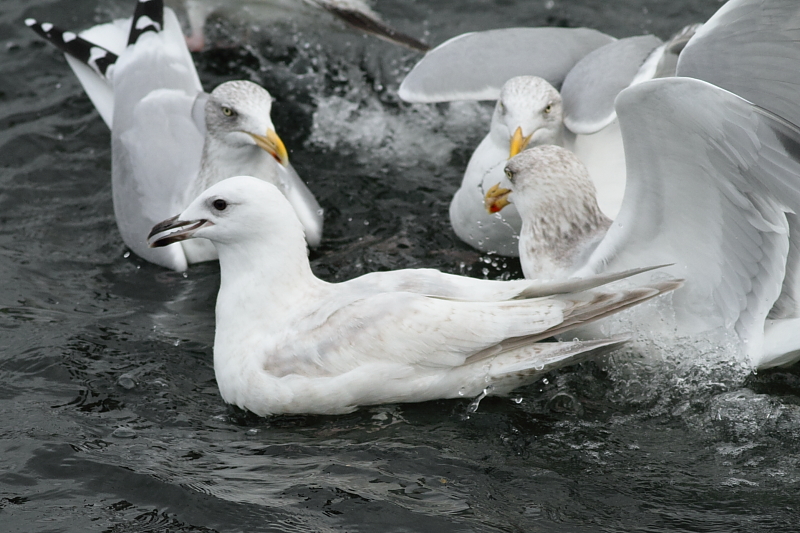 Holt Country Park (Norfolk) dominated crossbill headlines, with the flock of Parrot Crossbills there rising to an impressive 23 by 2nd. Though they proved quite mobile around the Holt Lowes and Edgefield area, at least 21 were seen again on 3rd. At least one male remained alongside the male Two-barred Crossbill at Hemsted Forest (Kent) throughout, and a female Parrot was reported from the Shropshire section of the Wyre Forest on 2nd, with up to five Two-barreds there on and off from 30th. Down in Gloucestershire, nine were again near Crabtree Hill on 1st, though what are likely some of the same birds were then relocated near Brierley from 2nd, with at least nine counted at the latter site. The female remained at Leith Hill Wood (Surrey) throughout, while the Broomhead Reservoir (S Yorks) flock reappeared, at least seven being seen there on 3rd. Finally, a female was reported at Furzy Lawn Inclosure in the New Forest (Hants) on 30th–1st. 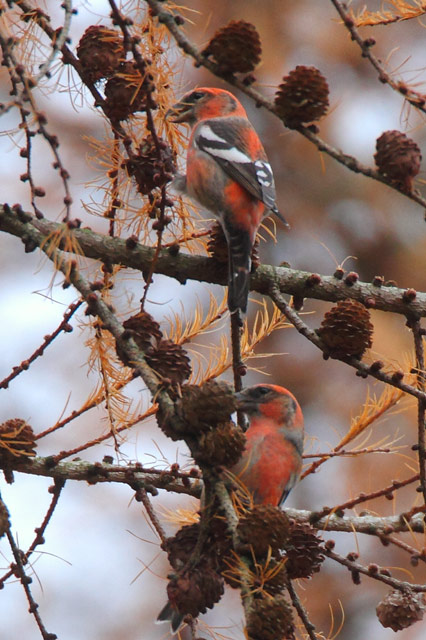 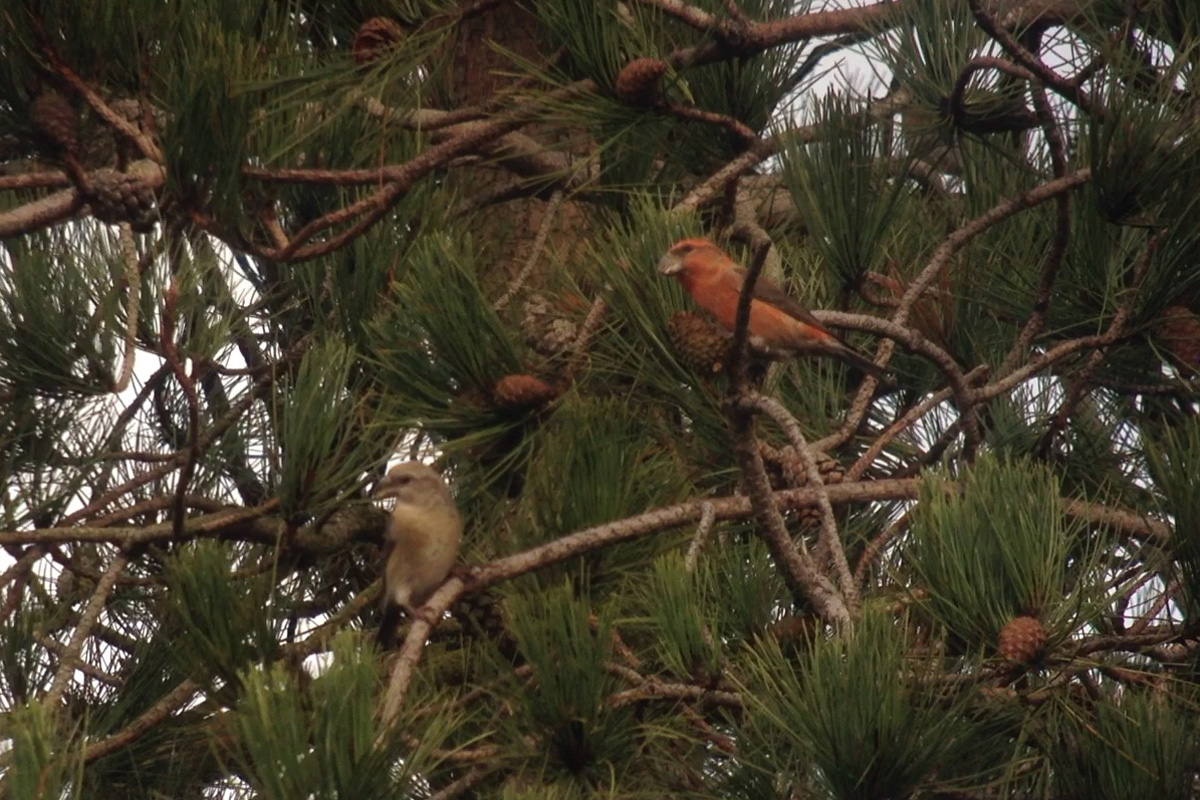 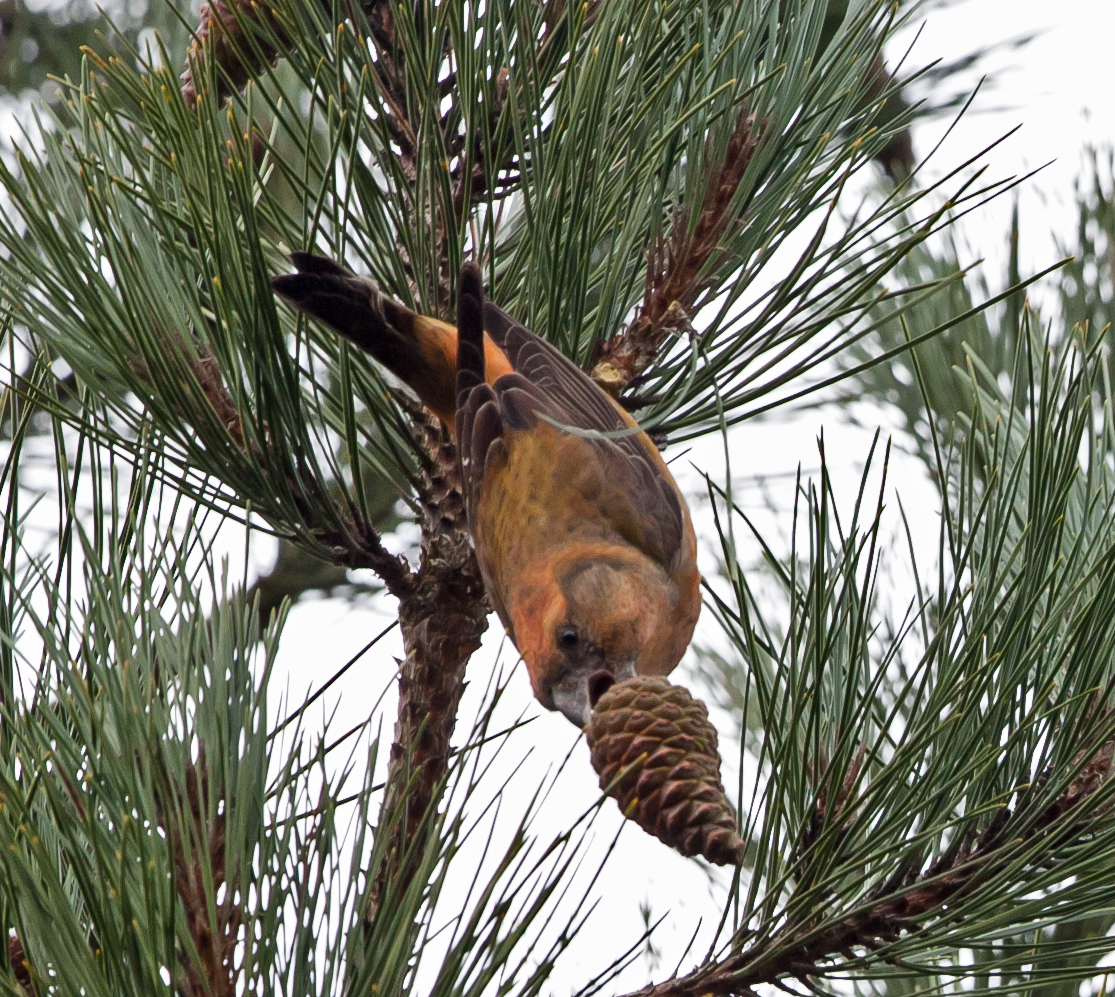 Best of the rest were a couple of Hume's Leaf Warblers, at Holkham Pines (Norfolk) on 27th and Gibraltar Point (Lincs) on 2nd–3rd. At least ten Yellow-browed Warblers were primarily in the south-west, although a single bird continued at Titchwell (Norfolk) to at least 30th. A Penduline Tit was a great find at Longham Lakes (Dorset) on 27th, and remained there to 1st. Rose-coloured Starlings remained in situ in Caister-on-Sea (Norfolk) and Penzance (Cornwall), a Richard's Pipit was in Cornwall at Crousa Downs on 3rd, a Serin was on St Mary's (Scilly) on 28th and a new Little Bunting was at Oare Marshes (Kent) on 28th; the Unst bird was also still at Halligarth on 1st. 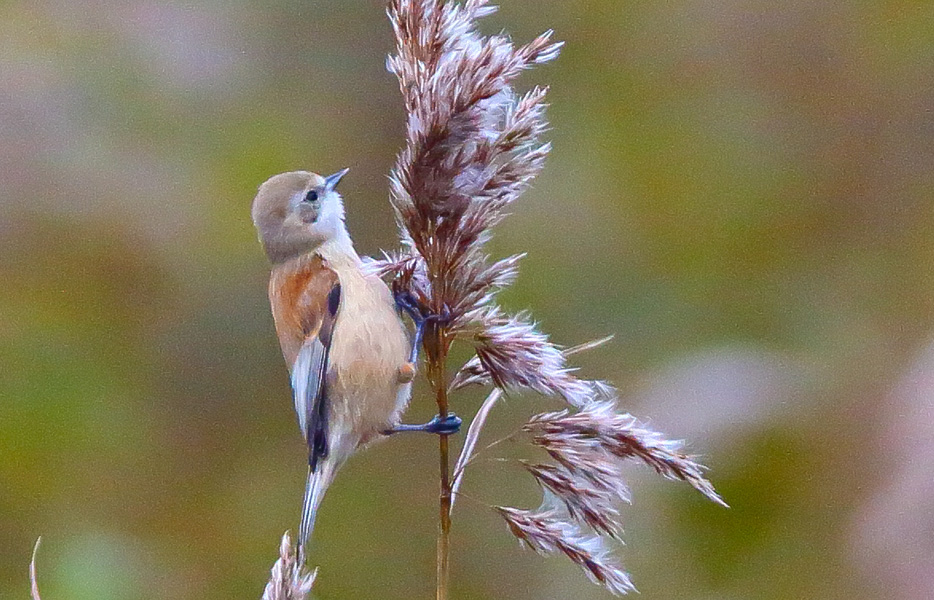 Where do we go from here? Well, despite little time left in the year, who'd bet against something like a Hawk Owl turning up in the coming weeks? The Dutch bird proved a popular cross-Channel twitch for many Brits last weekend and, with a Two-barred Greenish Warbler also seemingly attempting to winter in the Netherlands this year, it seems likely that there may yet be one big surprise left to bring us all some Christmas cheer. 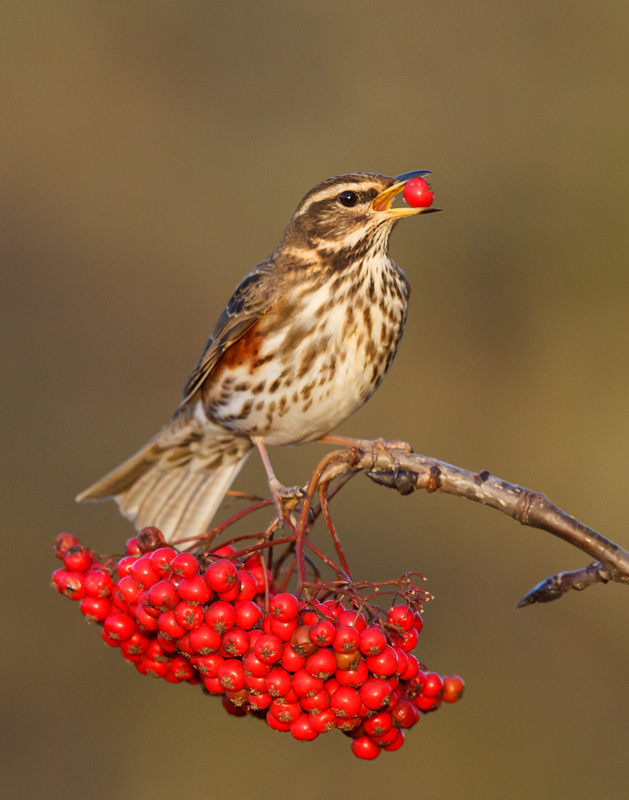 This autumn, the UK has seen an impressive bounty of berries and, judging by the photos we've received over the last few weeks, these are being enjoyed to the full by our resident and visiting thrushes. This feeding frenzy, though, can be extremely challenging to capture photographically, as berry trees can be a messy mass of twigs and the feeding birds can strike some very awkward poses. Bird photographer John Barlow shows us how it's done: pick out a single bird in good sunlight on a clump of berries that are isolated against a diffuse background and then carefully time the shot to freeze the bird in an appealing pose. In fact, John has gone way beyond the basics of this formula by including a near-pristine bunch of berries, by capturing the Redwing with a berry in its bill and by great use of colour, the brilliant patches of red glowing against the rich browns of the bird, branch and background. A delightful seasonal scene. 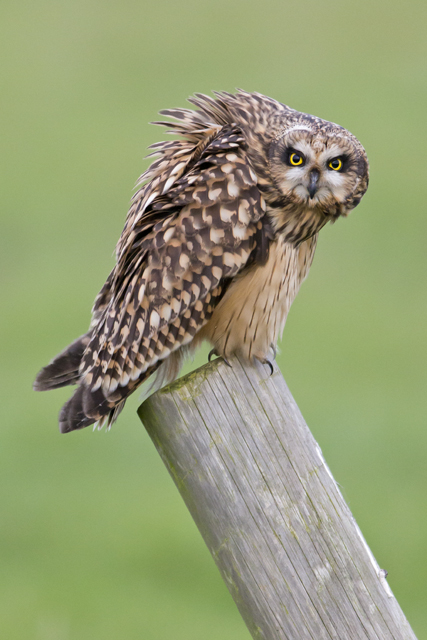 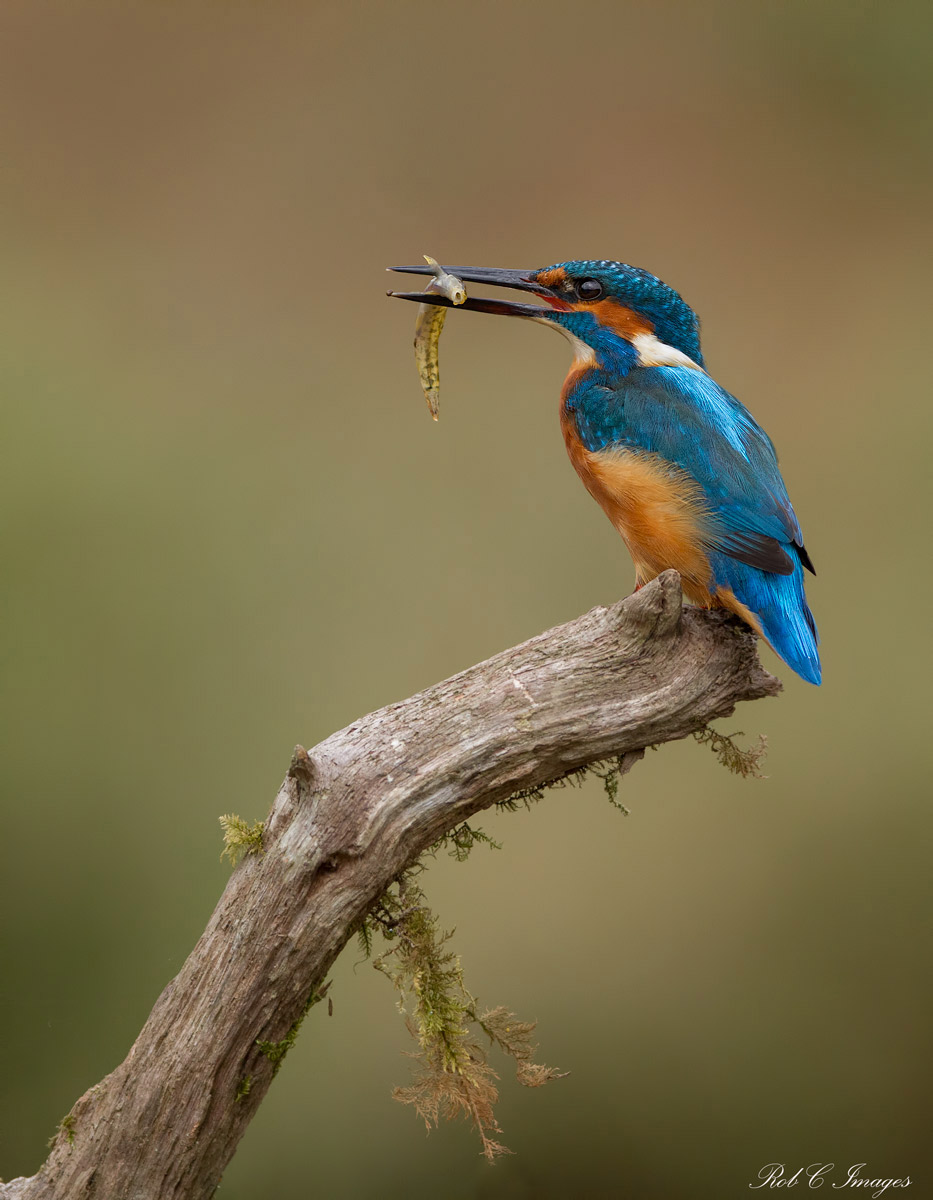 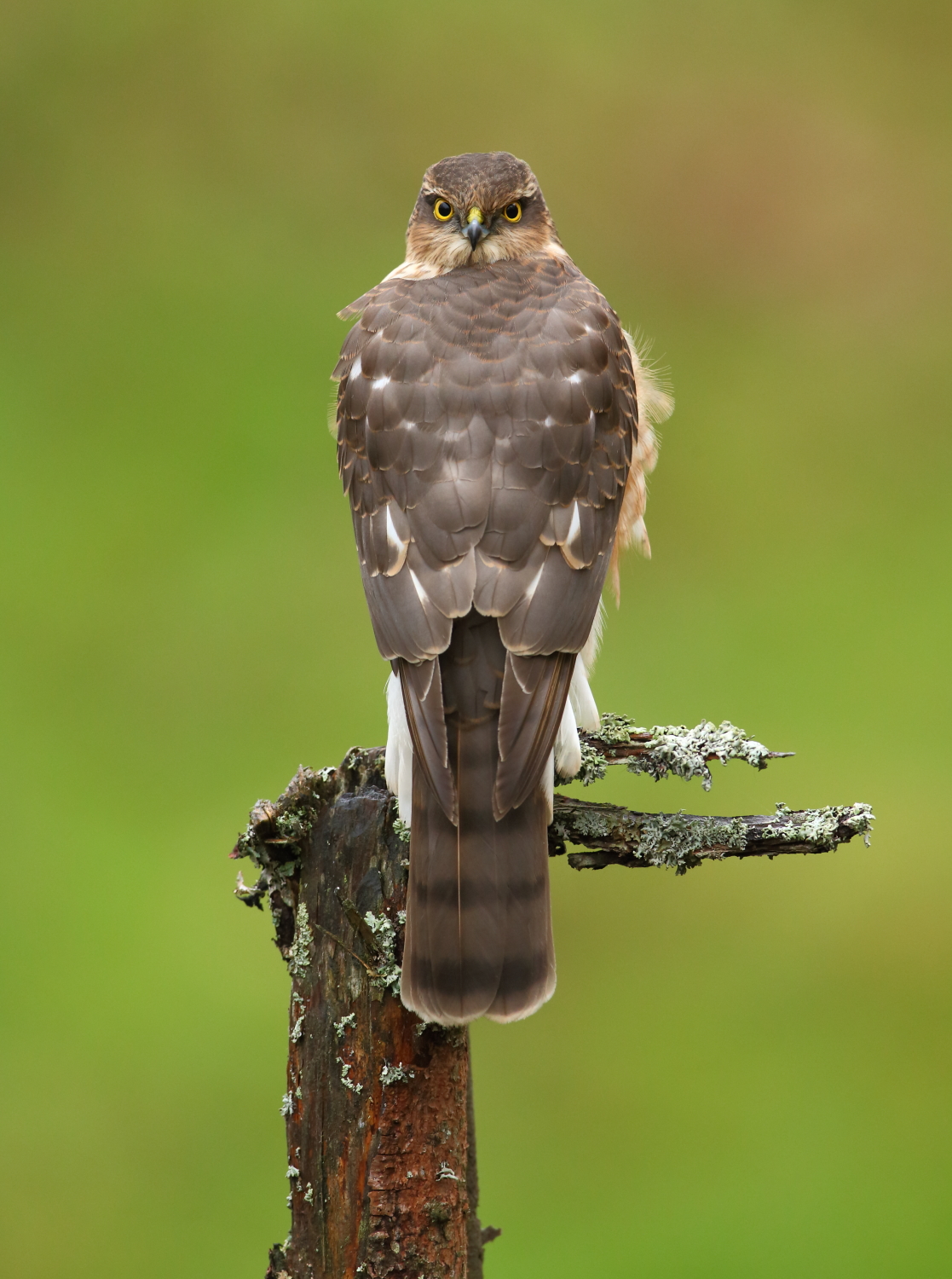 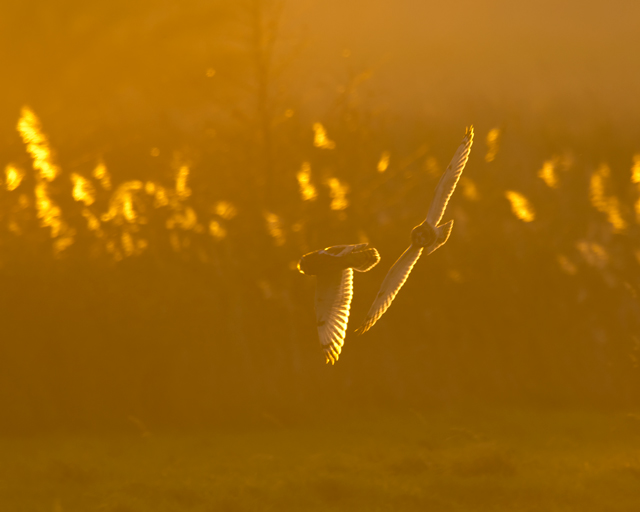 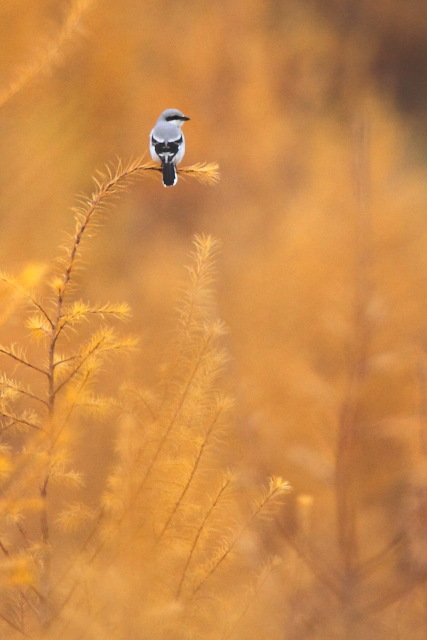 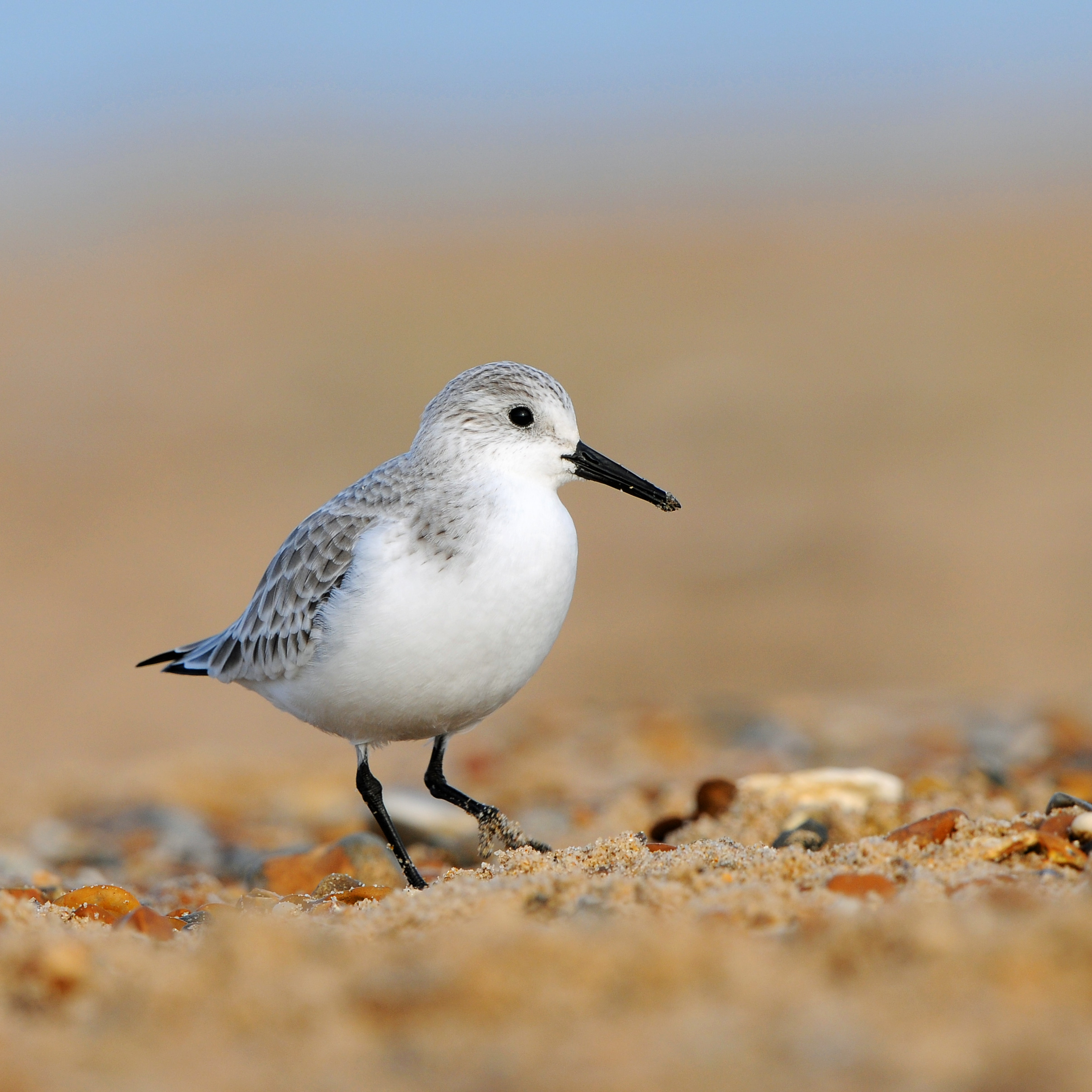 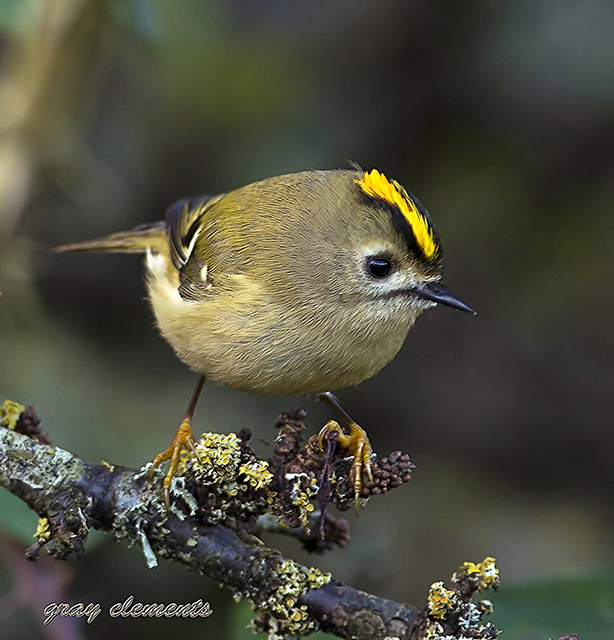 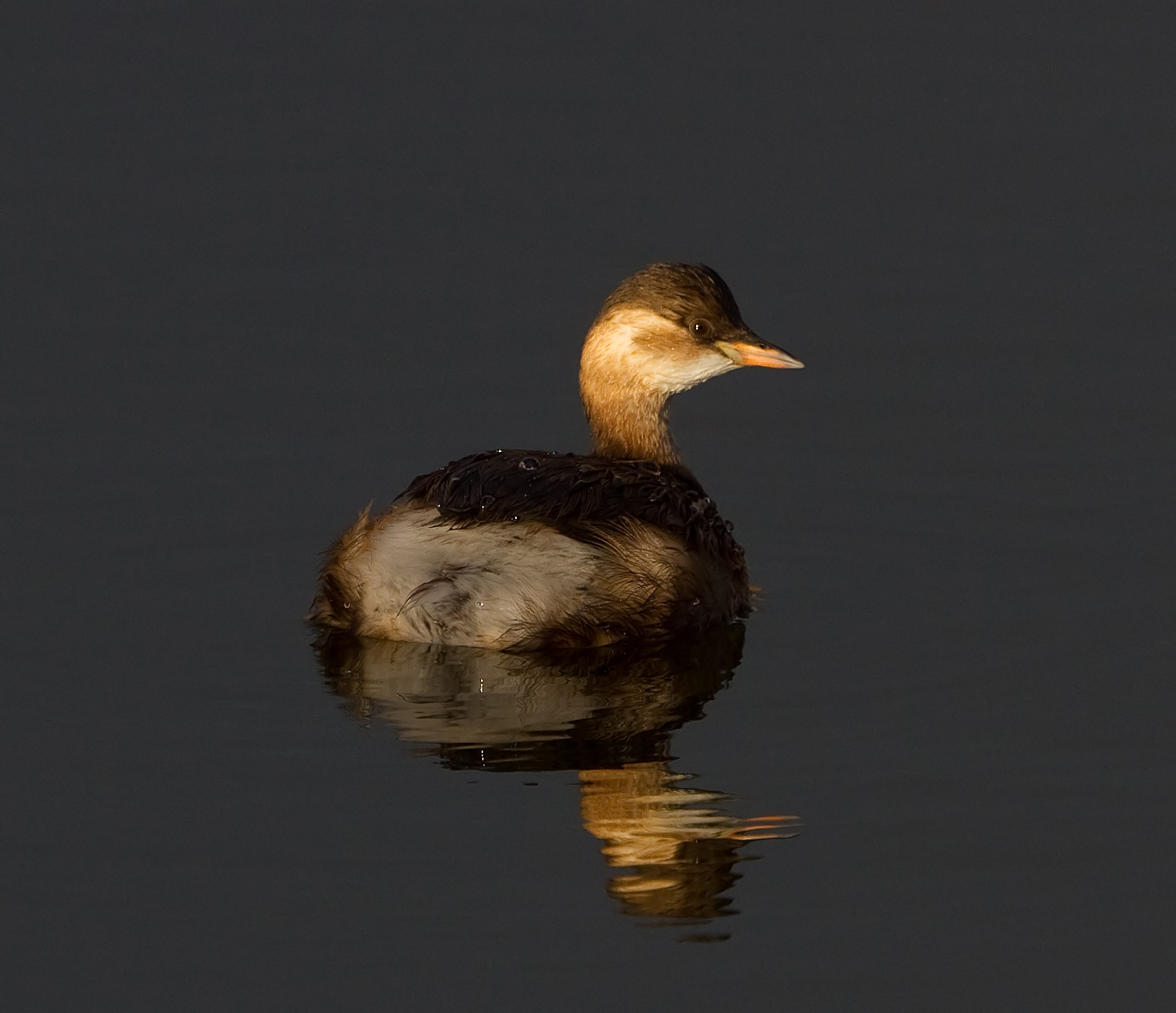 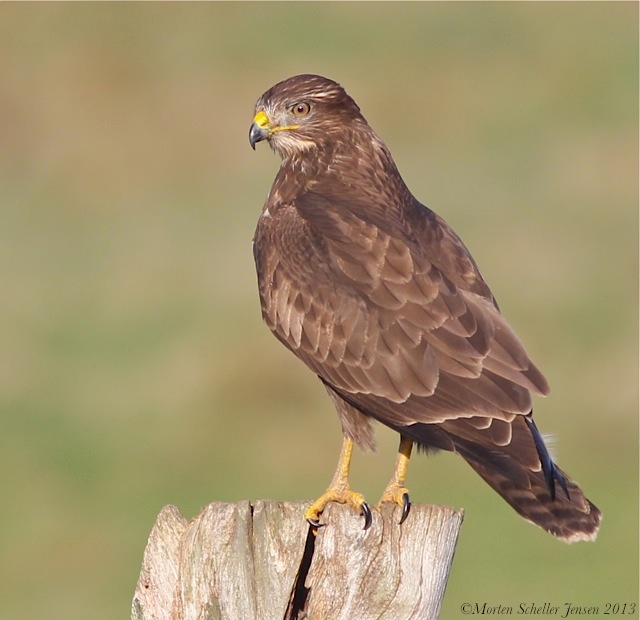