The hot, settled weather may have delighted tennis fans but it brought little of interest for birders, and several of the potential rarity highlights were marked with the "possible" or "reported" caveat.

Our very own Scottish big-hitter was a singing River Warbler on Wednesday 1st July at Applecross in Highland, a rare mainland occurrence of this species. In recent years the species has become near-annual on the Shetlands, but the last on the mainland was at Beachy Head (East Sussex) in May last year, and before that you have to go back to Lincolnshire in 1998 for another record away from the Northern Isles. The Stilt Sandpiper at Tacumshin hung around until Friday evening (26th June) but has not been seen since. An adult male Pallid Harrier was noted hunting east of St. Neot's in Cambridgeshire on Sunday 28th, but unfortunately the news did not break until the following day and the bird has not been relocated. The summering Zitting Cisticolas continued their stay at Port Soif on Guernsey.

Apart from these individuals, all the reports tagged "mega" this week also bore caveats about their provenance. A possible Least Tern was reported from Crosby on Merseyside on Friday 26th, though the bird was first noted as long ago as 2nd June. Distinguishing this American equivalent from our Little Tern is tricky (the BOU are yet to recognise the "split"), and the safest identification character is voice. In this case the bird was heard to call just once, and was seen to have a grey rump and inner tail, one of the subtle plumage features suggestive of Least Tern. The bird may still be in the area so we await further developments and, hopefully, photographs. Likewise in the "holding" folder is a possible Black or White-crowned Black Wheatear reportedly seen on the beach west of Lizard village on Monday 29th. The news broke on Wednesday 1st but there has been no sign of the bird since. A claimed Audouin's Gull at Blennerville in Co. Kerry was later withdrawn, with the consensus being that the bird was a "hybrid or aberrant gull".

Seawatching perked up a little this week, as might be expected at this time of year. A Cory's Shearwater passed Fife Ness on Saturday 27th, three Sooty Shearwaters were picked up passing western coasts, and five reports of Balearic Shearwater were received, mostly singles from Portland and Dorset (but with a report of 2 off the Bill on Thursday 25th). There were no reported Pomarine Skuas, the only rare skuas reported being Long-tailed Skuas past Spurn and Shetland, but a sub-adult Arctic Skua at Grafham Water in Cambridgeshire from Wednesday 1st was a notable inland record (though sadly we've just heard the bird had to be put down this afternoon). A Wilson's Petrel was seen off Slyne Head (Galway) on Thursday 25th, and a Leach's Petrel was reported on Huxter Well Marsh, Potteric Carr (S Yorks) on the morning of Tuesday 30th, but the report was not confirmed by later sightings. A possible 1st-summer Bonaparte's Gull was reported at Skippool Creek (Lancs) on Tuesday 20th. A Caspian Tern lingered at Blennerville (Co. Kerry) on Wednesday 1st but has yet to be relocated today, and the long-staying adult Forster's Tern was still at East Tacumshin (Co. Cork) to 30th at least.

New Great White Egrets were reported, mostly fleetingly, from Loch of Strathbeg (Aberdeenshire), Willington GPs (Derbyshire), West Moors (Dorset) and Reculver (Kent), with possibles at Old Hall Marshes (Essex) and Christchurch Harbour (Dorset) though the identification of both of the latter has been queried. The mobile Suffolk bird reappeared at Minsmere on Thursday 2nd after going missing for a few days. A Cattle Egret was reported briefly at Belmont Reservoir (Lancs) on Wednesday evening (1st) and the three were still on the Youghal estuary (Co. Cork) to Sunday 28th at least. The Purple Heron in the Ham Wall area (Somerset) was also last reported on Sunday 28th, but may well still be lurking somewhere among the reeds out there on the Levels. A "probable" flew over Sutton-in-Ashfield (Notts) the same day. A Squacco Heron was reported over the golf course at Upavon (Wilts) on Tuesday 30th, and the Scilly Night Heron had returned to Porthellick Pool by Sunday 28th after a 17-day absence broken only by a fly-by sighting over Telegraph early last week. New Spoonbills away from regular areas were at Grove Ferry (Kent), Claire Mare (Guernsey), Trimley Marshes (Suffolk), Cresswell Pond (Northumberland) and Fairburn Ings (W. Yorks) but only the Cresswell bird lingered for more than a day. Two Common Cranes seen over several sites in the Dunstable (Beds) area on 25th may just have been the same pair as that reported over Coventry city centre on Monday 29th. The Spotted Crake continued to sing until Monday 29th at least near Howmore Youth Hostel on South Uist and Corncrakes were reported away from the key breeding areas at Kirktown of Culsalmond and Loch of Strathbeg (both in Aberdeenshire).

Turning to wildfowl, the drake American Wigeon was still on Graemeshall Loch (Orkney) to Thursday 25th at least and the Black Duck on Colliford Lake (Cornwall) entered its second month in the area, being last reported on Tuesday 30th. Likewise, the drake Ferruginous Duck was still on Chew Valley Lake (Somerset) to 30th, but two drakes on a pool at Cantley Beet Factory (Norfolk) may be of dubious origin as a colour-ringed bird of known escaped origin was there earlier in the year. After a couple of weeks' absence from our news services, the two drake Surf Scoters were reported offshore from Blackdog (Aberdeenshire) on 27th and 28th.

Honey Buzzards continue to be seen from time to time at Swanton Novers, Great Ryburgh and Wykeham Forest, but away from these recognised watchpoints the only reports were of passing singles at Minsmere (Suffolk) and Chandler's Ford (Hants). It emerged this week that a Black Kite has escaped from the Hawk Conservatory Trust at Weyhill and may account for some of the recent sightings of this species in Hampshire, but other reports came in from Cambridgeshire, Lancashire and Cornwall. A female Red-footed Falcon has been reported lingering in the Twyford area (Hants) for the last couple of weeks, and in neighbouring Berkshire a male was over the River Kennet near Woolhampton GPs on the evening of Sunday 28th.

A Stone Curlew was a notable find at Murvagh (Co. Galway) but there were no Red-necked Phalarope records away from the Outer Hebrides and Orkney. A probable Baird's Sandpiper was consorting with Ringed Plovers on the machair at Achnahaird (Highland) on Friday 26th and the only other wader sighting of note was a Pectoral Sandpiper at Seal Sands (Cleveland) belatedly reported from Wednesday 24th, presumably the same bird as that at Greatham Creek the previous day. 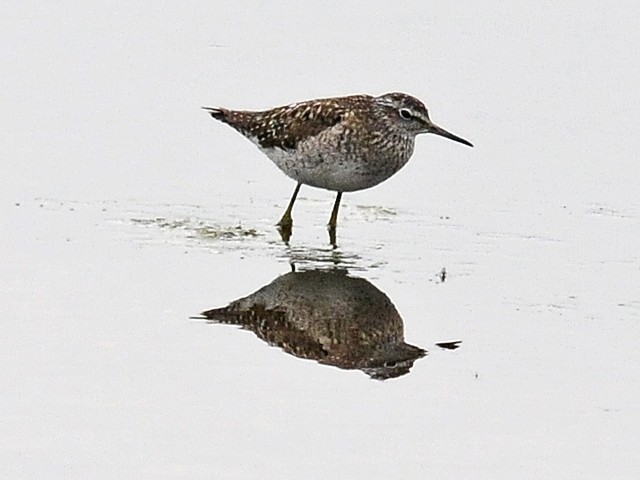 A clutch of four East Anglian Bee-eater reports came in this week, which could conceivably refer to the same bird — sightings were at Sutton Heath (Suffolk) on Saturday 27th, Pott Row (Norfolk) on Monday 29th, Stiffkey on 30th and Cley on 1st. Wryneck, Red-backed Shrike and Woodchat Shrike were each represented by single reports this week, at Maple Cross (Herts) on Tuesday 30th, North Gare (Cleveland) the same day, and Lundy island (Devon) on 28th respectively. The Otmoor (Oxon) Marsh Warbler is still going strong, but the popular bird at Amwell GPs (Herts) appears to have gone (but could a possible singing male reported from Tyttenhanger GPs in the same county on Tuesday 30th be the same bird relocated?). An Icterine Warbler was trapped and ringed at Kilnsea (East Yorks) on Saturday 27th, again the only representative of its kind this week. 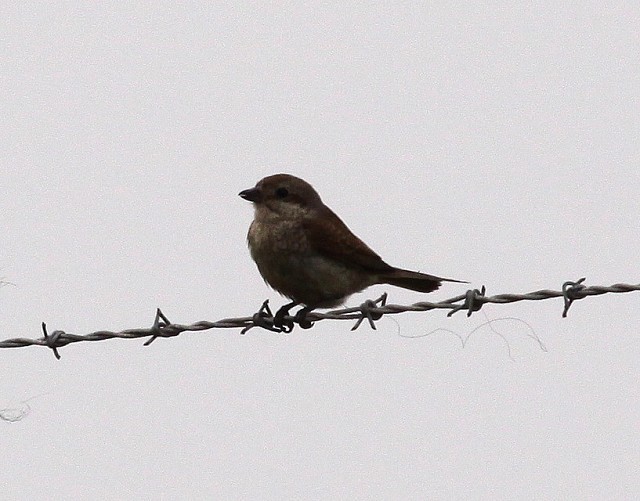 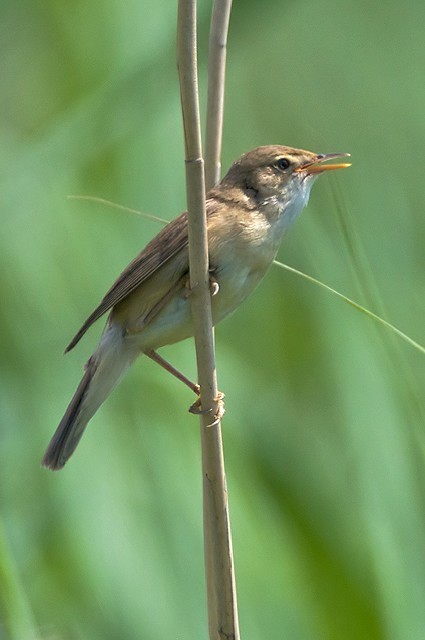 Serins were reported at two sites on Portland (Dorset) over the weekend, and at St. Ouen's Pond on Jersey the Common Rosefinch was heard singing on 26th (and subsequently) after an absence of four days; rumours of a female in the vicinity have not been substantiated, as far as we know. An influx of Crossbills to the Northern Isles included a possible male Two-barred at Loch of Wasdale, Orkney. Rounding up this week's Review is a report of a migrant Golden Oriole at Saxa Vord (Shetland); the breeding pair and their two offspring at Lakenheath Fen on the Suffolk/Norfolk border are also said to have been showing well on and off this week. 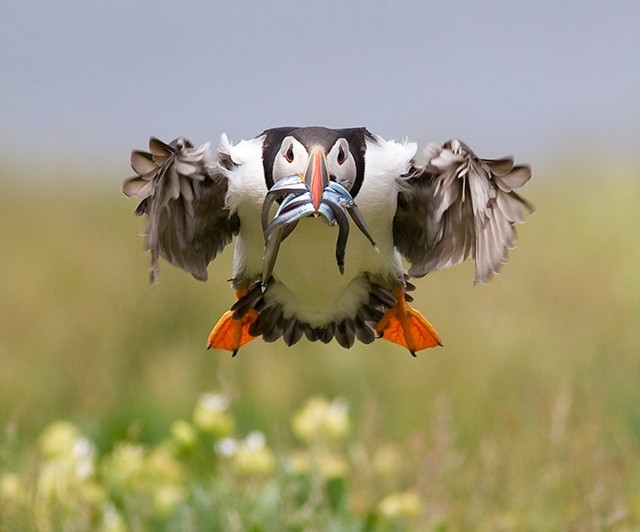 At this time of year, we always receive plenty of high-quality photos of Puffins, especially from trips to the Farne Islands. Even in such a target-rich environment as the Farnes, though, it's far from easy for bird photographers to capture the 'classic shots' of these charismatic birds. When it comes to Puffin flight shots, the image any photographer would love to capture is the head-on approach with a bill full of fish. As well as needing to position yourself in the right place to get an incoming bird in good light, you need to respond quickly if and when the moment arrives. Having a strong wind blowing from behind you can help to slow down the action, but you still need well-honed camera skills to be sure of bagging a well-focused, well-exposed image. This week, we've had an excellent example of this classic shot from Kevin Du Rose. With great lighting, a perfect head-on trajectory, the full 'air-brakes' pose and a blurred background with enough detail to provide a sense of place, this is a superbly executed capture. 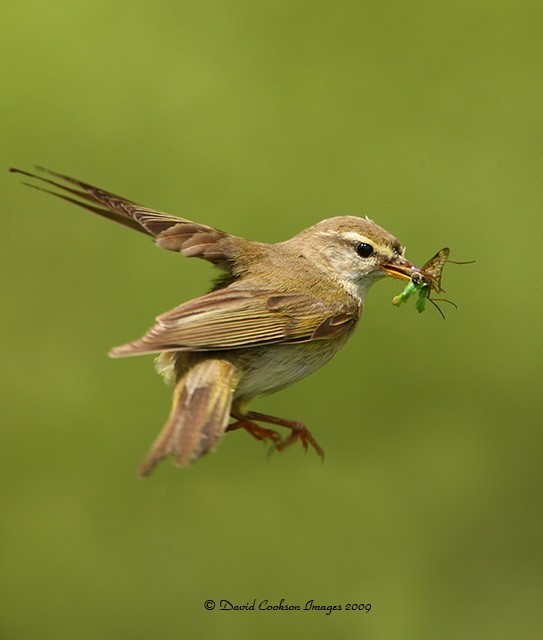 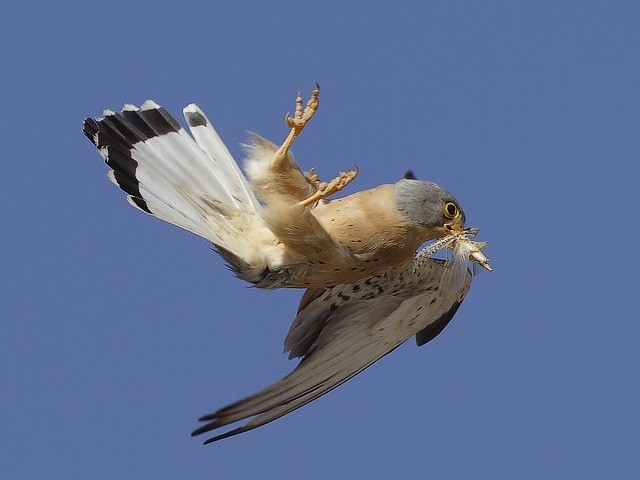 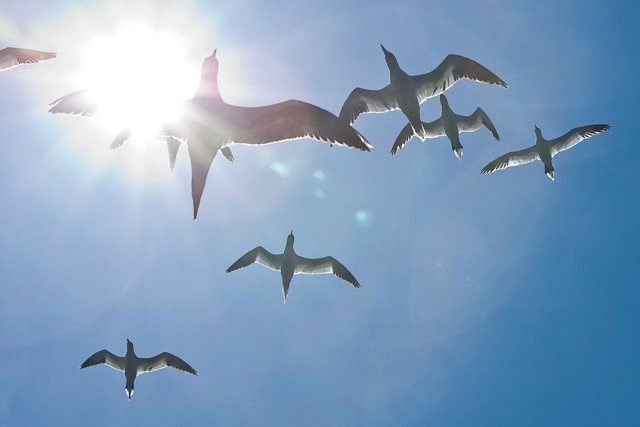 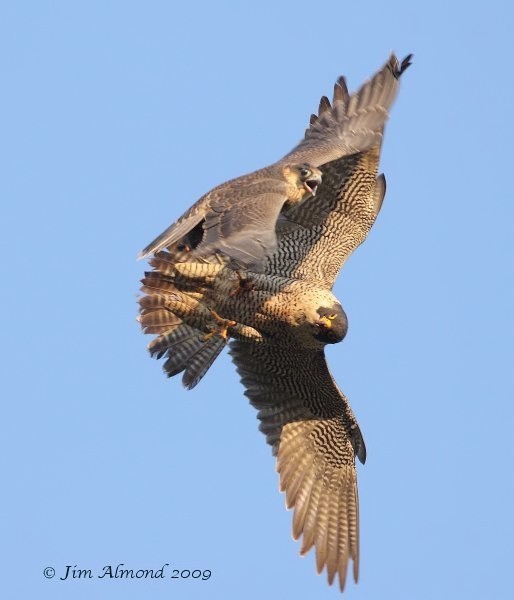 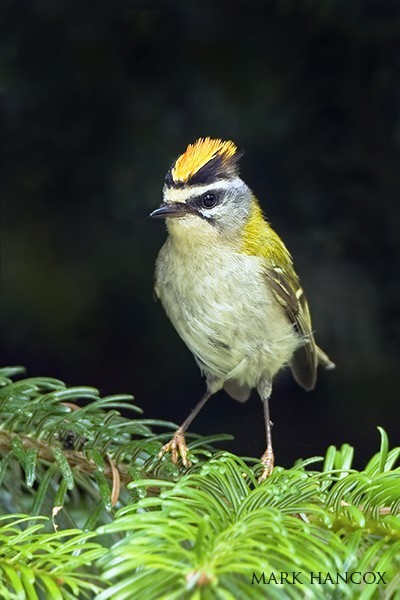 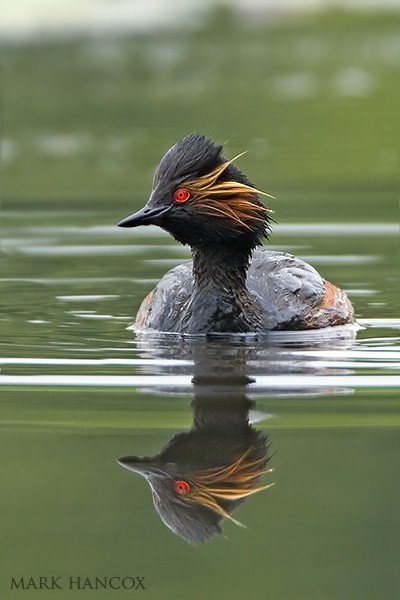 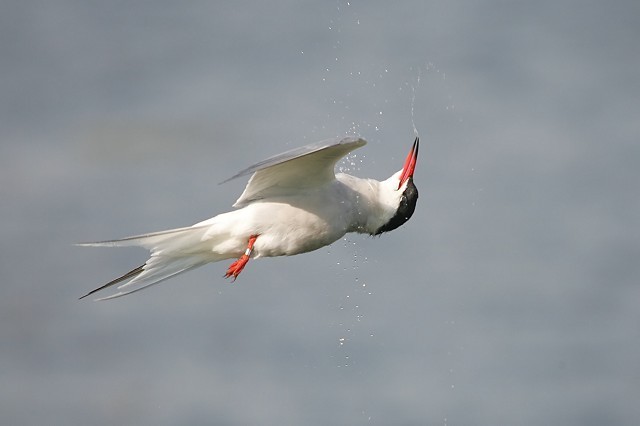 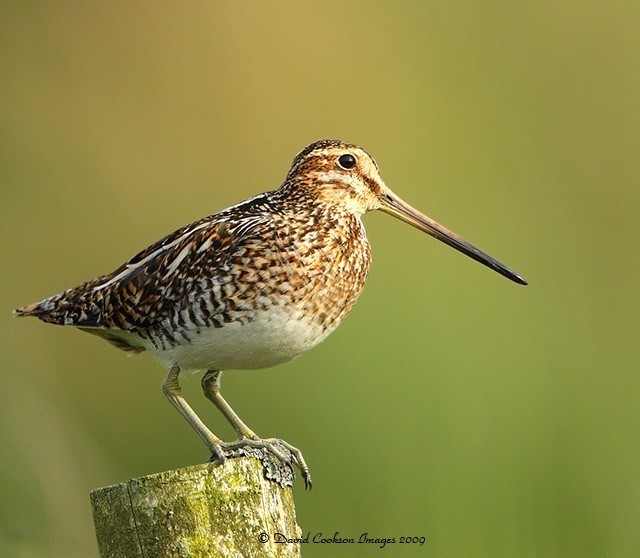 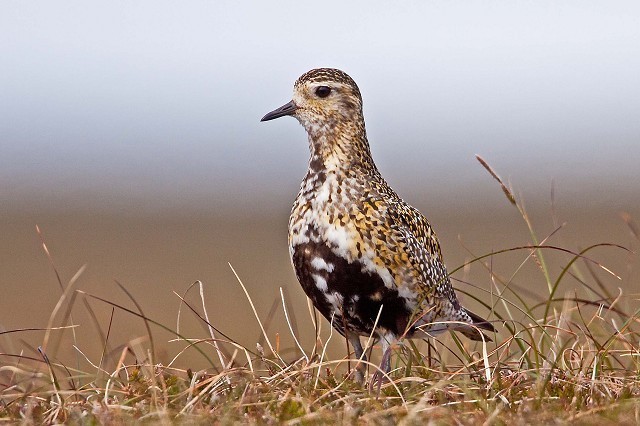 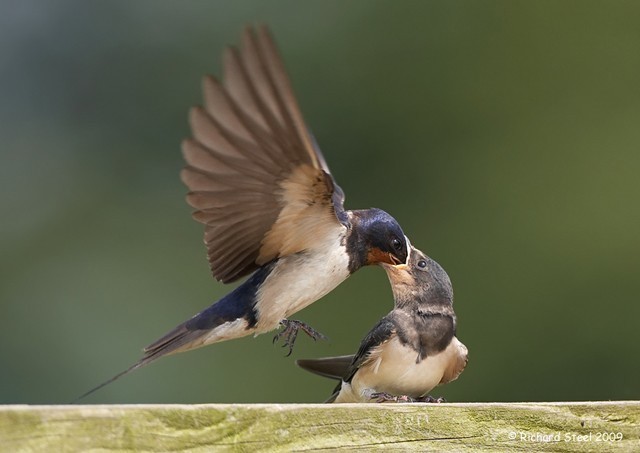 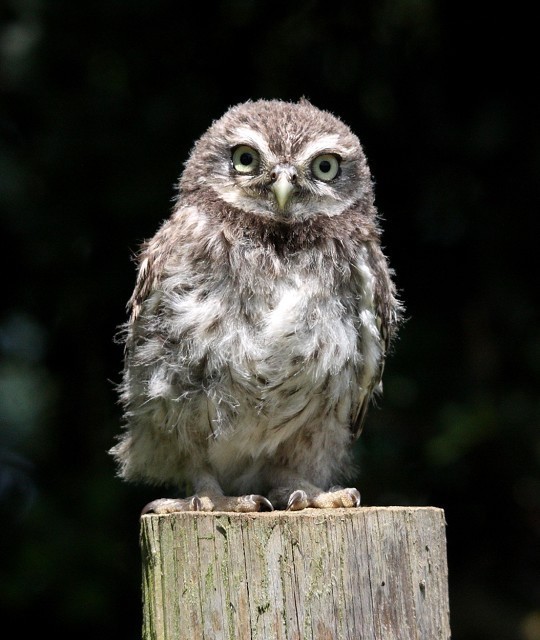 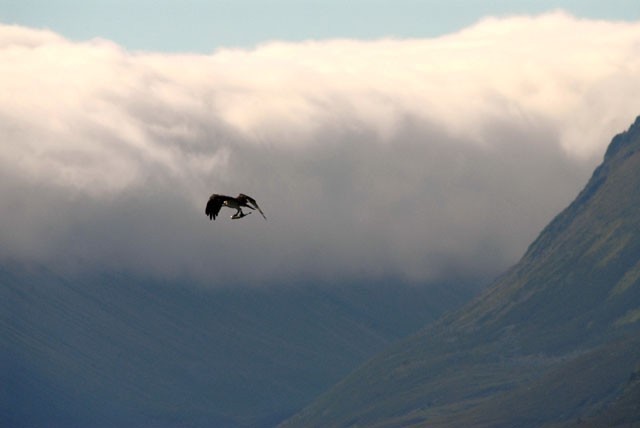 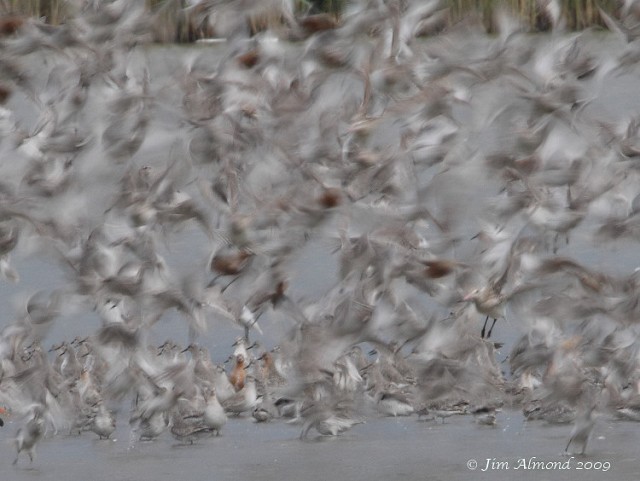 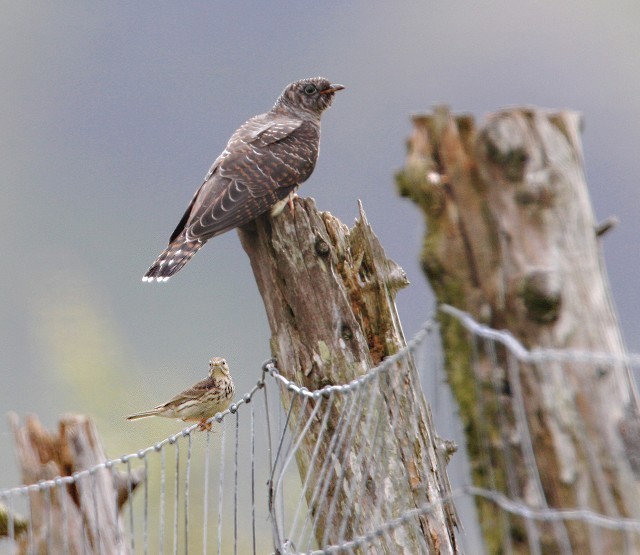 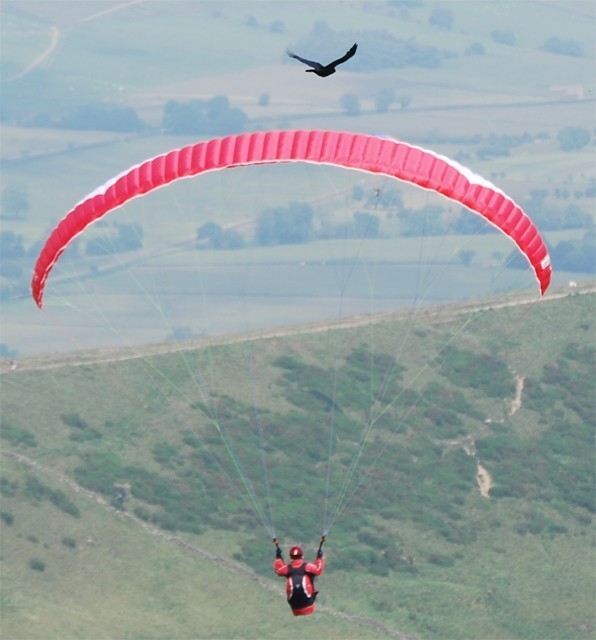