Another fairly quiet week passed in which the highlights were probably a smattering of early spring migrants. The first Northern Wheatear of the year is always a true herald of spring and so news of a bird at Dengie Marshes, Essex, on 26th was most welcome, though a Little Ringed Plover at Sandwell Valley, W Mids, from 22–28th was also to be celebrated. With Garganey also arriving in Dorset, Lincolnshire and Perthshire, plus a few White Wagtails also beginning to pop up, spring 'proper' is only just around the corner.

Rarity-wise it was the continuing Glaucous-winged Gull in westernmost County Cork that again took top spot — the bird was still performing well on Monday afternoon. Elsewhere the Hudsonian Whimbrel in Cornwall has become a bit more elusive again and was noted only on 28th. The Pacific Diver was still off Marazion on 29th. A White-billed Diver lingering off Cape Cornwall from 25–29th was the first to be twitchable in the county since the famously confiding Hayle Estuary bird in early 2007. One also briefly visited Uig Bay, Skye, on 28th. 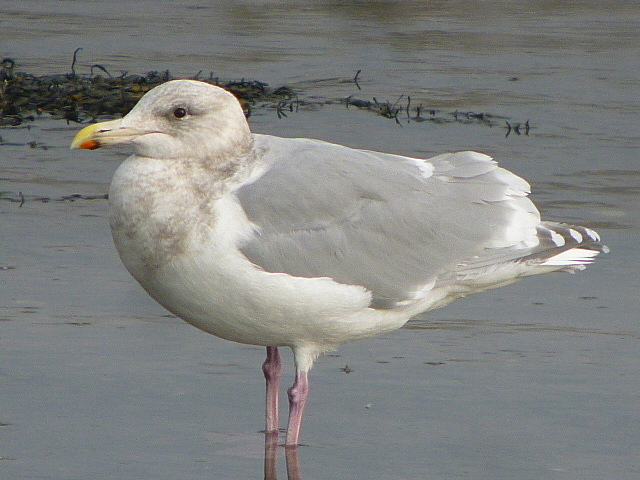 A drake Surf Scoter was off Wallasey, Cheshire, on 25th, with two there two days later. A drake was found offshore between Ballyvaughan and Finvarra Point, Co Clare, on 28th and a young male was off Fermoyle, Co Kerry, on 27th. Further drakes continued in the Isles of Scilly, North Yorkshire, Lothian and Fife, the last still alongside the female King Eider at Ruddon's Point. The drake King Eider also remained near Ballyconnell, Co Sligo, on 24th. 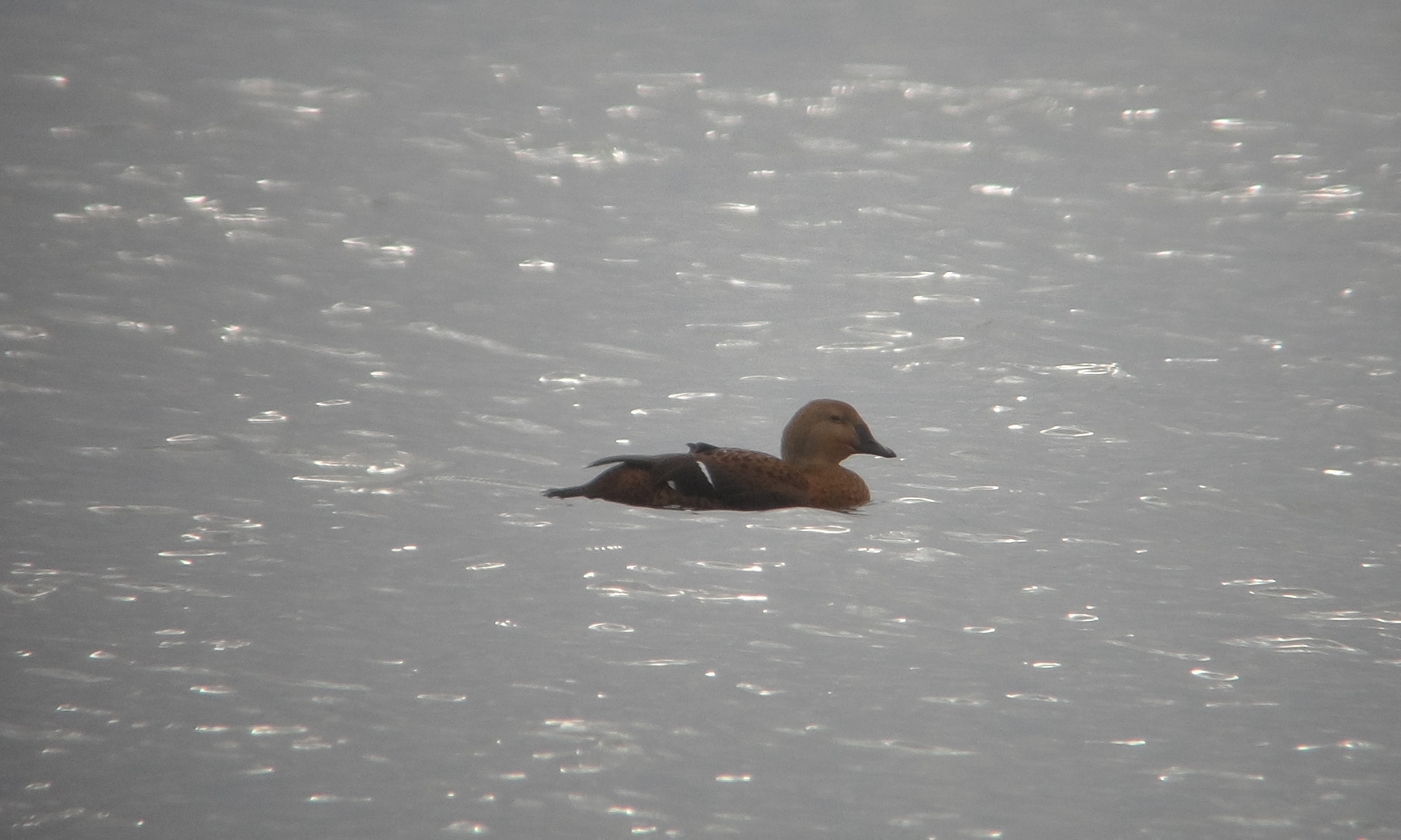 The drake American Black Duck put in another week at Baltimore, Co Cork, while no fewer than nine American Wigeon were seen across Britain and Ireland. Of these, new birds were reported from two sites on Orkney and at Corby Loch, Aberdeenshire, while the popular and confiding drake continued to show well at Scalby Mills, N Yorks. A dozen Green-winged Teal were all birds from previous weeks. 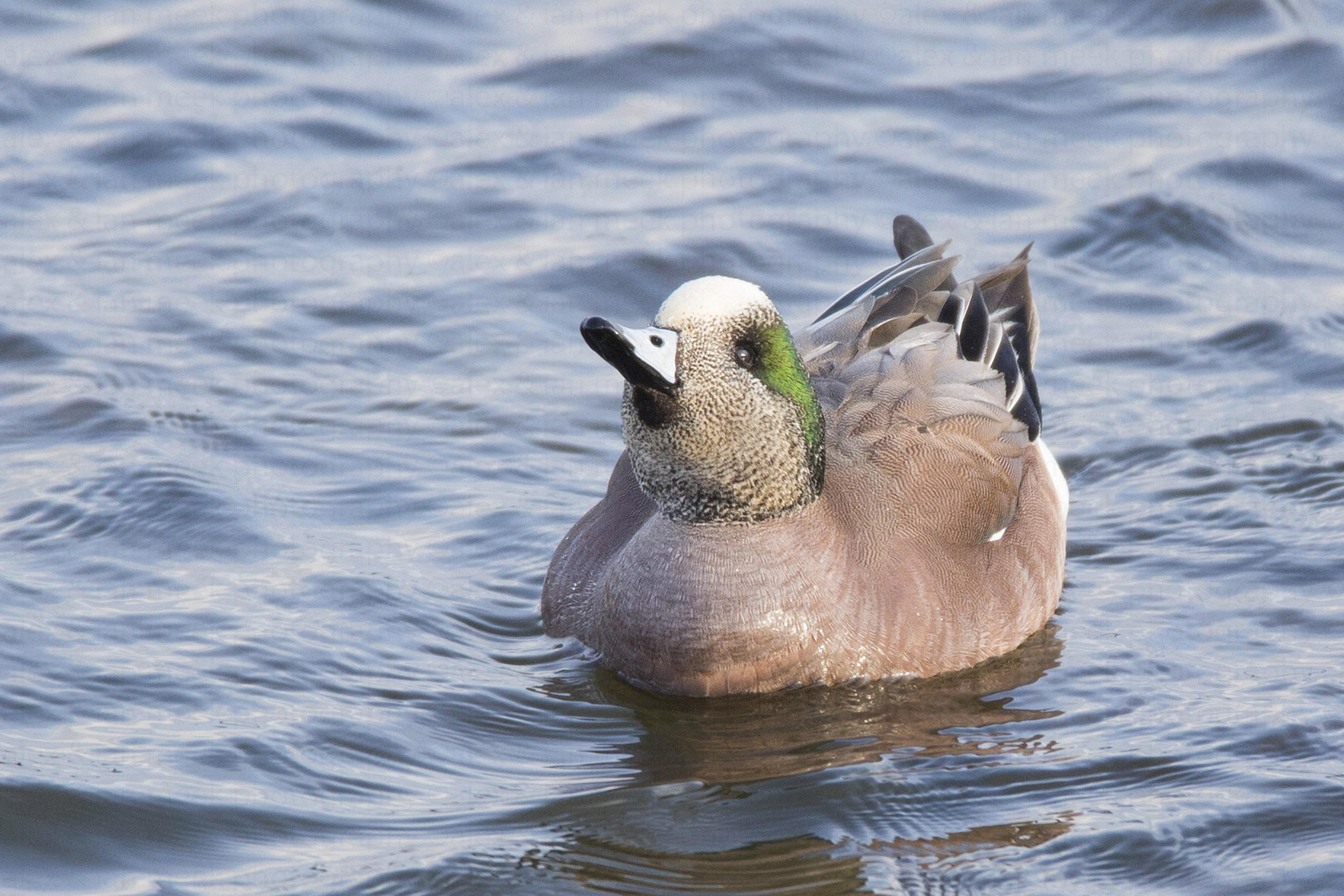 The Hooded Merganser spent the week at Corsham Park, Wilts, but seems disconcertingly tame, showing to within a few metres of the gathered pilgrims at times. Long-staying drake Lesser Scaup remained at Cardiff in Glamorgan, and Dozmary Pool in Cornwall. A total of seven Ring-necked Ducks were reported from five sites, these including the drake and two females still at Ashton's Callows, Co Tipperary, on 28th and further males in Somerset, Ayrshire, Kinross and Co Waterford. The female Ferruginous Duck was still at Holkham Park, Norfolk, on 24th and the West Yorkshire bird was again at Pugney's Country Park on 29th — the first sighting for 11 days. The drake also remained among captive birds at Washington WWT on 26th. 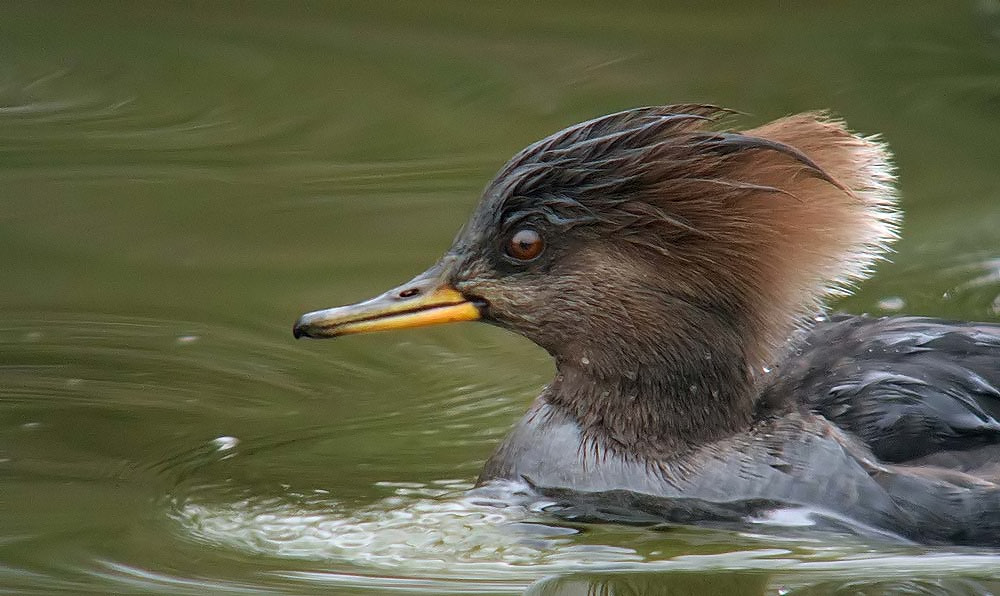 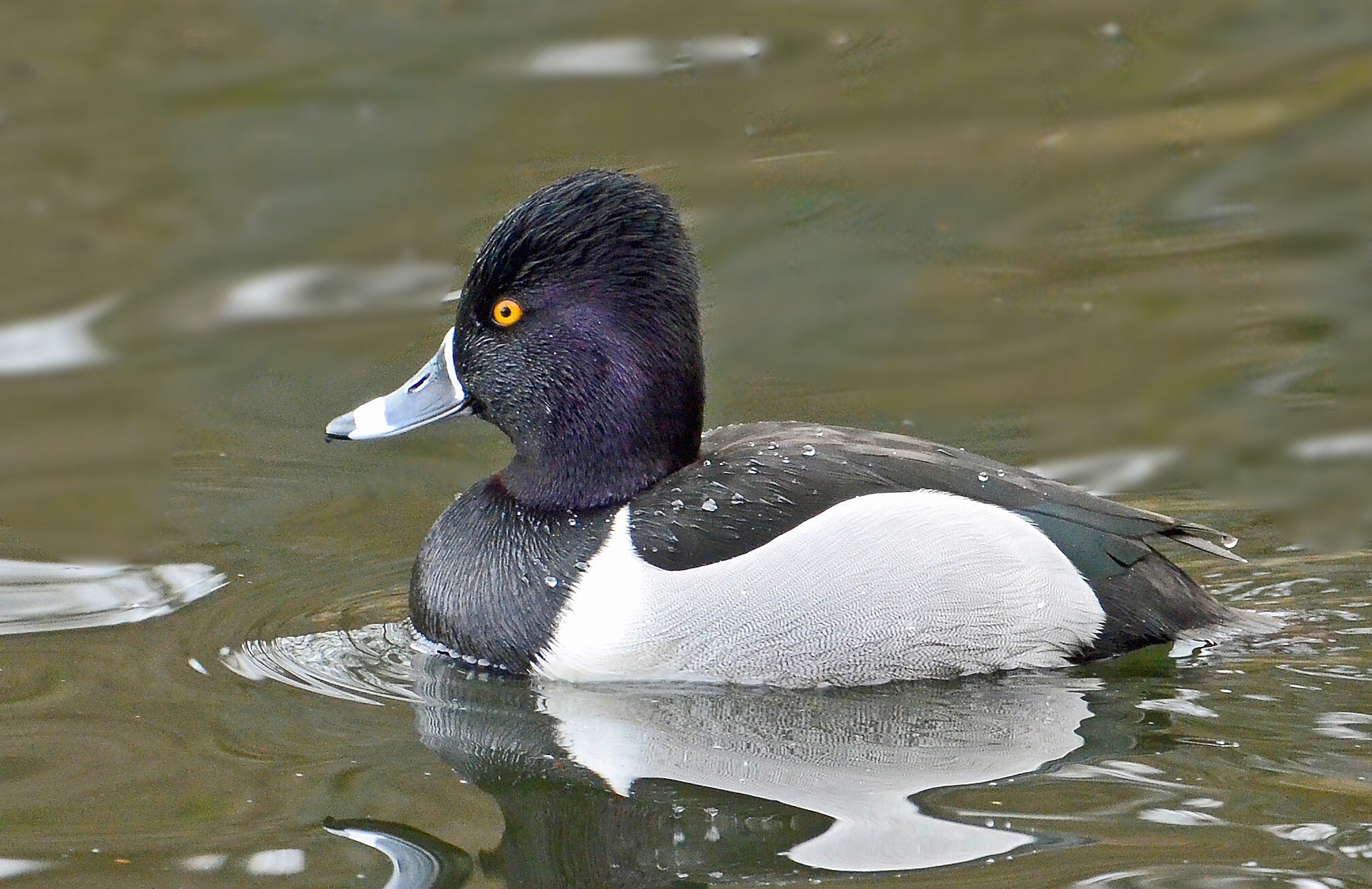 The white-morph Snow Goose had again switched locations on the Solway and was back in Cumbria on 27th, when it was seen at Rockcliffe Marsh. A Richardson's Cackling Goose was still on Islay, Argyll, from 26–28th, and the Richardson's Cackling and Todd's Canada Goose were both still at Lissadell, Co Sligo, on 24th. No fewer than seven Black Brants were reported between Devon and Lincolnshire. 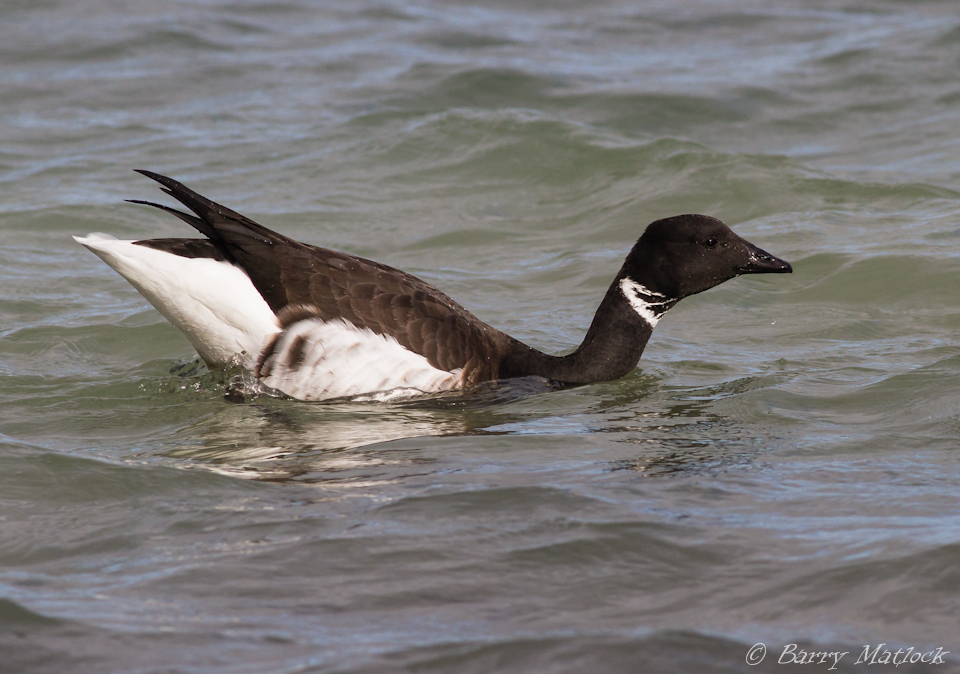 A Polish-ringed White Stork at Welney, Norfolk, from 27–29th initially caused considerable excitement and was well twitched before subsequent research revealed that it was actually a previously wild bird that had hit power lines and been imported to Shorelands Wildlife Gardens for rehabilitation. The birds here are free-flying (!) and may be prone to the odd wander — keep your eyes peeled for White Storks bearing similar green Darvic rings in the future. 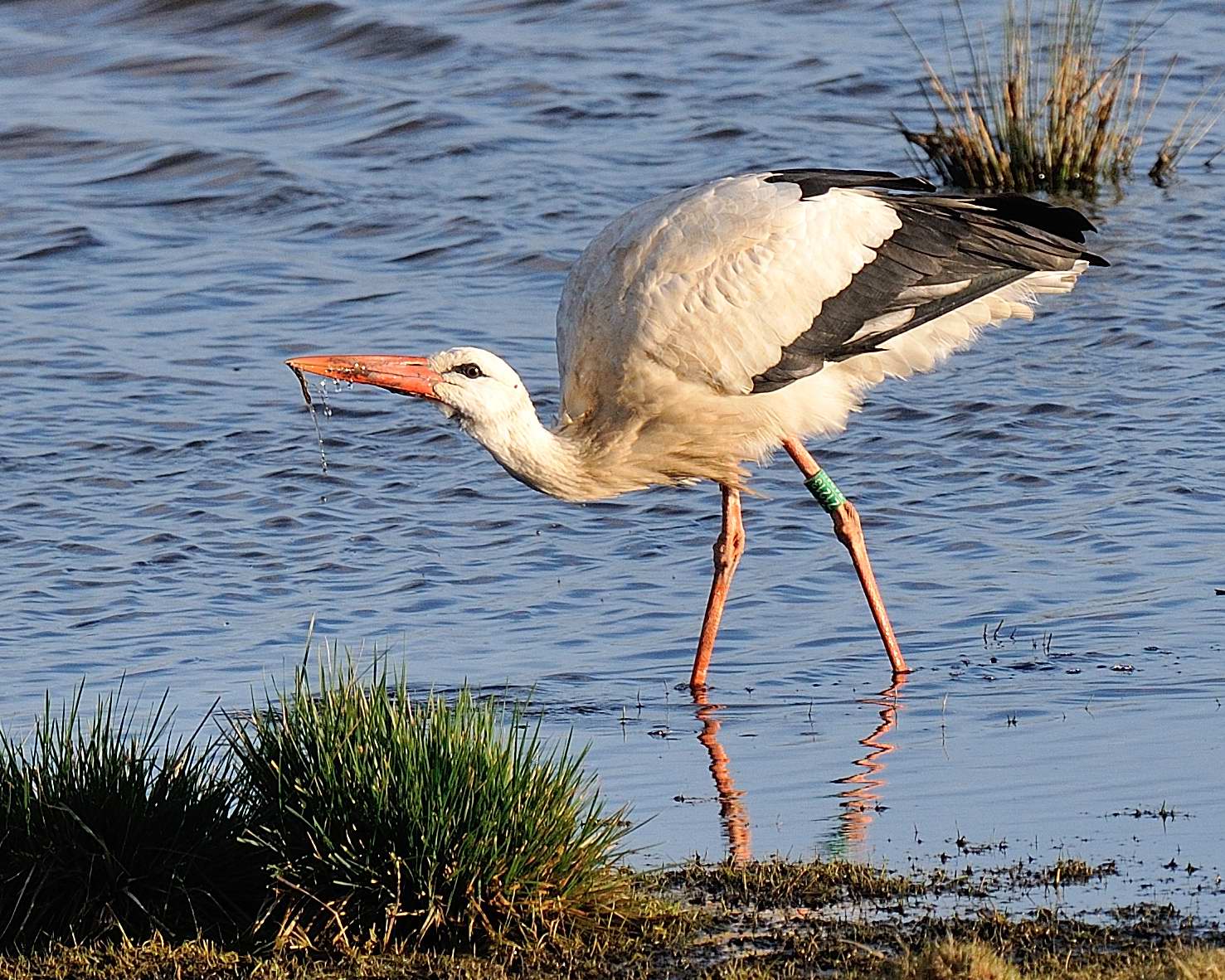 The Cattle Egret remained in the Mudgley and Westhay Moor area of Somerset all week, while a bird at North Cove, Suffolk, on 29th was presumably the bird previously seen in Norfolk earlier in the month. A similar make-up of Glossy Ibis to the previous week included two still together at Cork Harbour and one as far north as Gowy Meadows, Cheshire, again on 27th. Great White Egrets were reported from over 20 sites and included threes in Suffolk, Glamorgan and Powys.

The white-morph Gyr Falcon was still at Baleshare, N Uist, on 25th and the male Northern Harrier was on North Ronaldsay, Orkney, on 28th. It was, however, the first week that the Norfolk Pallid Harrier hasn't featured on Bird News Extra for quite some time. Just five Rough-legged Buzzards were reported: in Durham, Cambridgeshire, Essex and two in Norfolk.

Significant shorebird records were restricted to the trio of wintering Long-billed Dowitchers. The Northumberland bird was last noted at Cresswell Pond on 27th, while the Hampshire bird was still at Pennington Marshes on 29th and the Rutland Water individual was also still there on 1st. 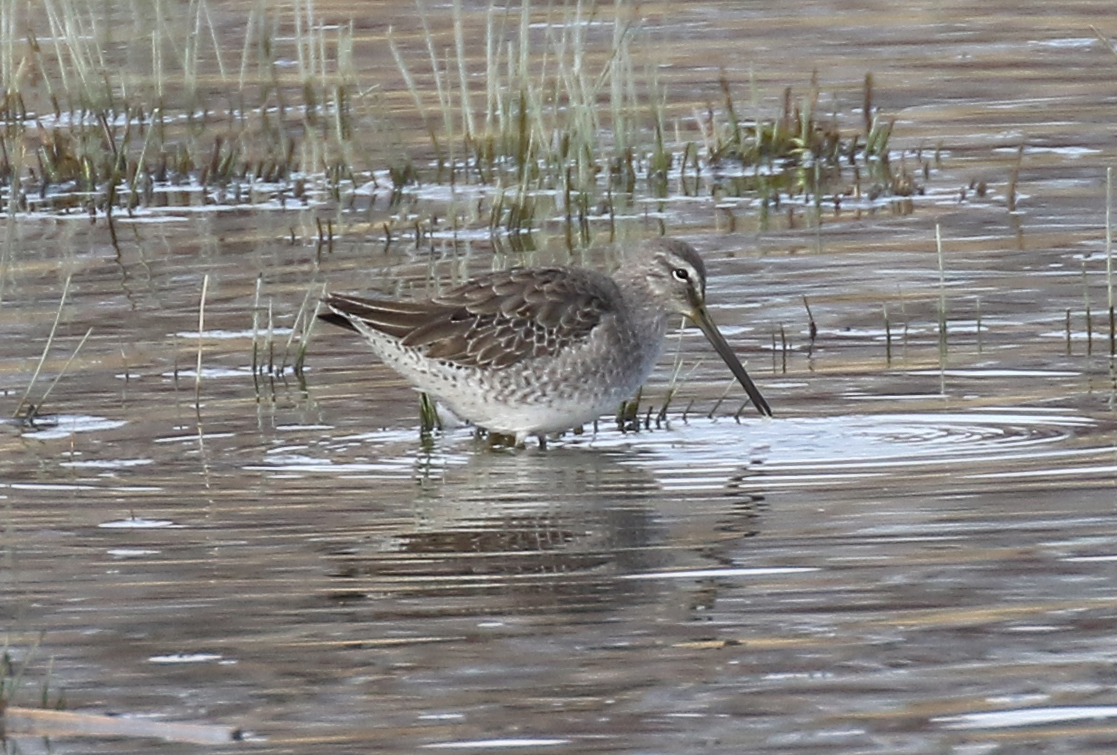 Another first-winter American Herring Gull was found this week, this time on Barra, Outer Hebrides. First seen on 24th near Borve, it was still at Garrygall on 29th and was well photographed. Elsewhere the Cornish bird was again roosting at Mousehole on 27th. The Devon Bonaparte's Gull was last noted at Cockwood on 29th. Ring-billed Gulls were reported from 10 sites and included at least three still at Tralee, Co Kerry, and an absolute minimum of four adults around Cork City. British records once again came from Hampshire, Clyde and Highland. An amazing three Kumlien's Gulls roosted at Wintersett Reservoir, W Yorks, on 25–26th and a juvenile was at Grafham Water, Cambs, on the latter date. Both Glaucous and Iceland Gulls again numbered into the fifties. The Forster's Tern was back at Nimmo's Pier, Co Galway, on 28th. 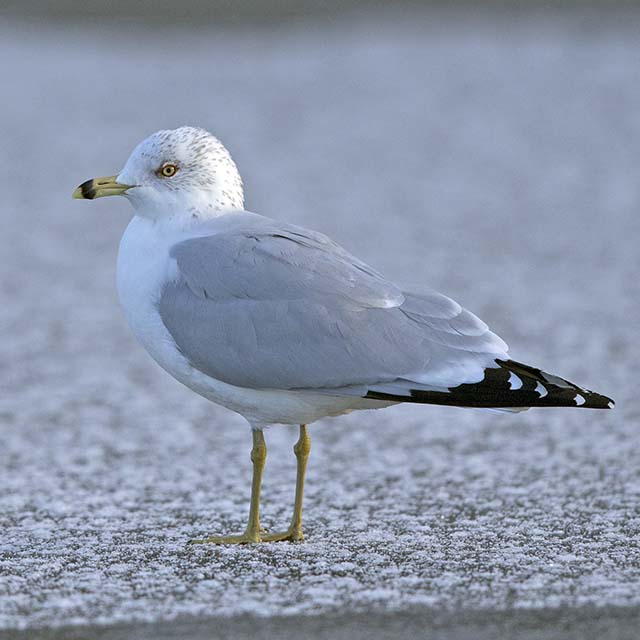 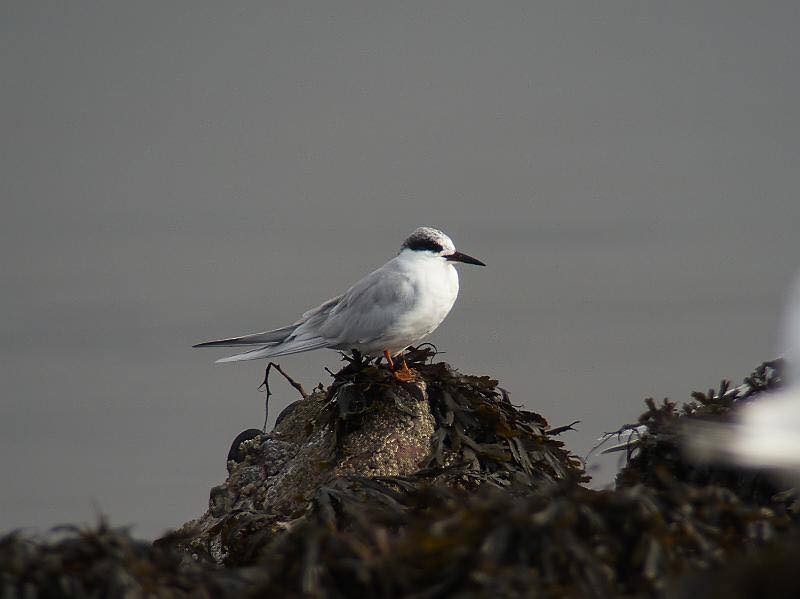 Barring some sort of disaster it looks as though the Hoopoe at Wall Heath, Staffs, is going to survive the often testing conditions of a British winter — it was still present on 1st. Shore Larks included singles at Cleethorpes, Lincs, and Sheppey, Kent, the two still at Hartlepool, Cleveland, and three still at Burnham Overy Dunes, Norfolk. Two Richard's Pipits remained at Blackhall Rocks, Durham, all week and two were again noted daily at Flamborough Head, E Yorks, from 28th. Elsewhere one was again at Swillington Ings, W Yorks, on 26th and 29th and the Sheppey, Kent, bird was also still showing. 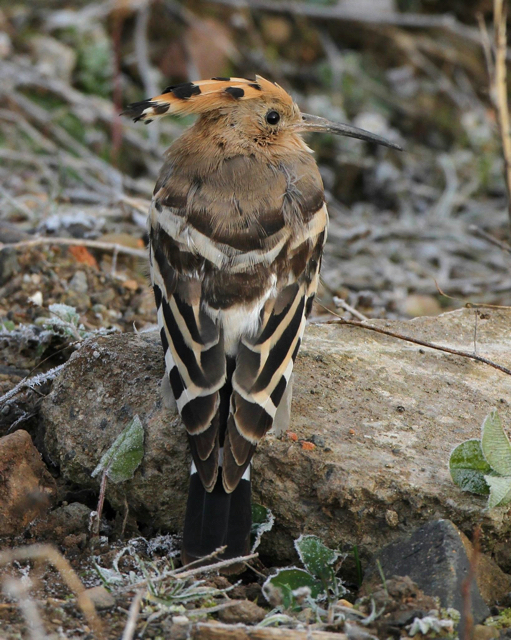 Of the eight Yellow-browed Warblers reported, five were new birds. These included a well-watched individual at Monk Haven, Pembrokeshire, from 26th and birds at Bournemouth Airport, Dorset, on 26th and Paignton, Devon, on 1st, in addition to Cornish birds at Breage and Pensilva. Better still was a smart Pallas's Warbler found at Portesham, Dorset, on 25th and still showing well there on 1st. Meanwhile the Dusky Warbler was again at Ham Wall, Somerset, on 29th — the first report in over a fortnight. 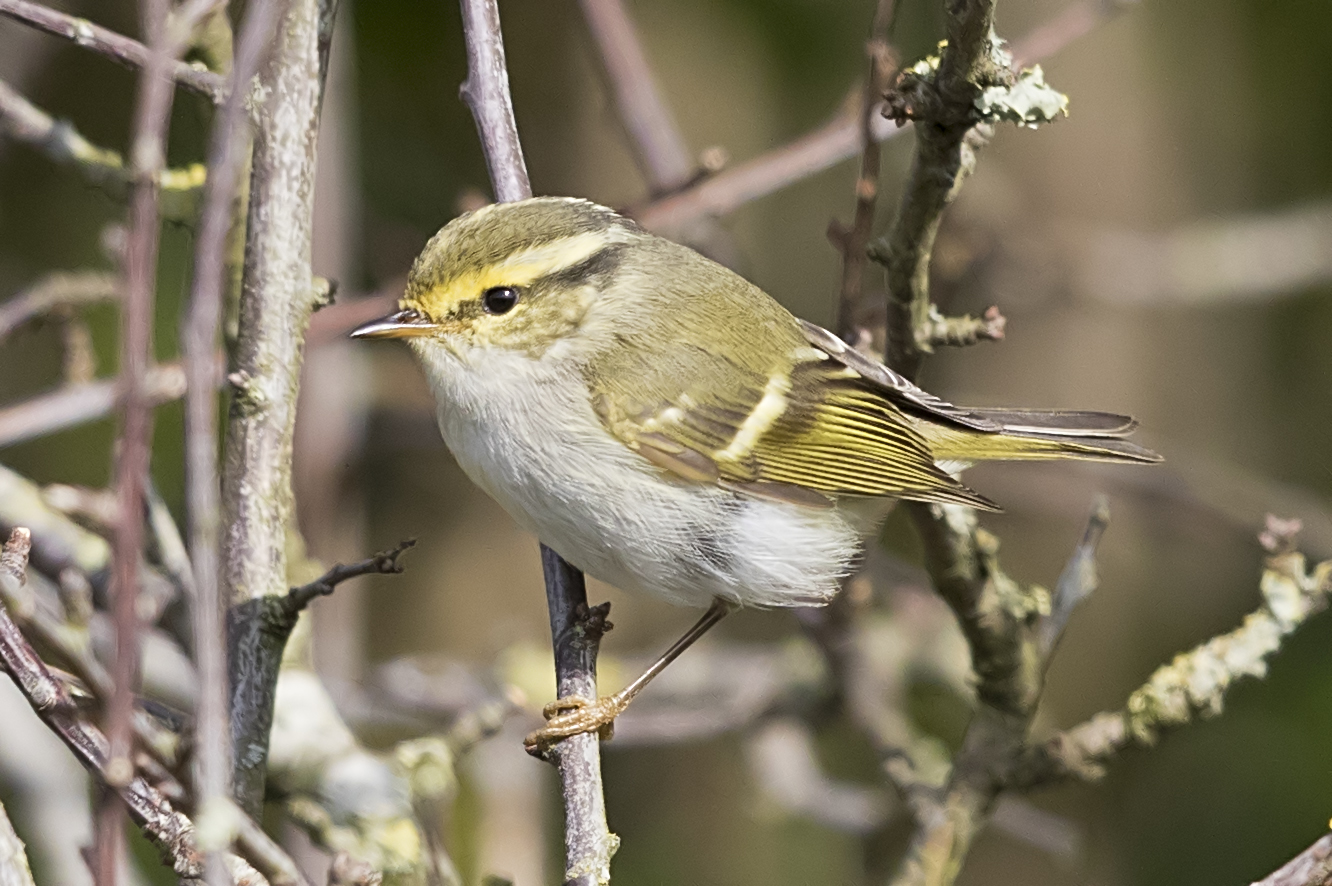 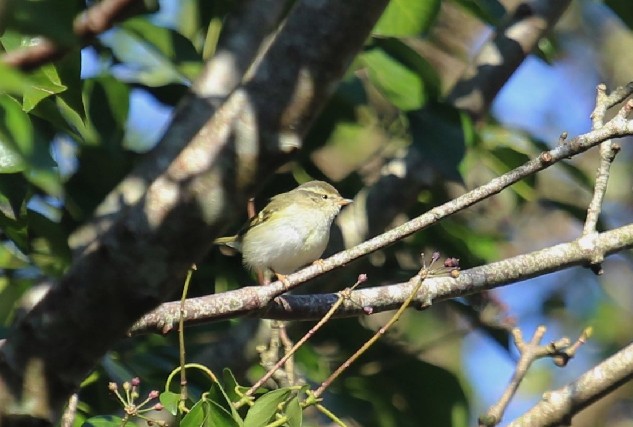 The good winter for Penduline Tits continues with another found this week, this time at Strumpshaw Fen, Norfolk, on 27–28th. Two were still at Saltholme, Cleveland, on 28th along with the two still in Gloucester all week, though just a single individual remained at Titchfield Haven, Hants, to 26th. Elsewhere the Rose-coloured Starling was again noted in Lizard village, Cornwall, on 29–1st.

It was a quieter week around the region with the Netherlands again figuring heavily on the scoresheet: the Siberian Rubythroat, Pine Bunting, Redhead and Long-legged Buzzard were all still present and correct at their respective sites. Elsewhere the Oriental Turtle Dove and male Pine Bunting remained in Hordaland, Norway, and Denmark's 12th Black Scoter was off Hou, Nordjylland, on 28th. 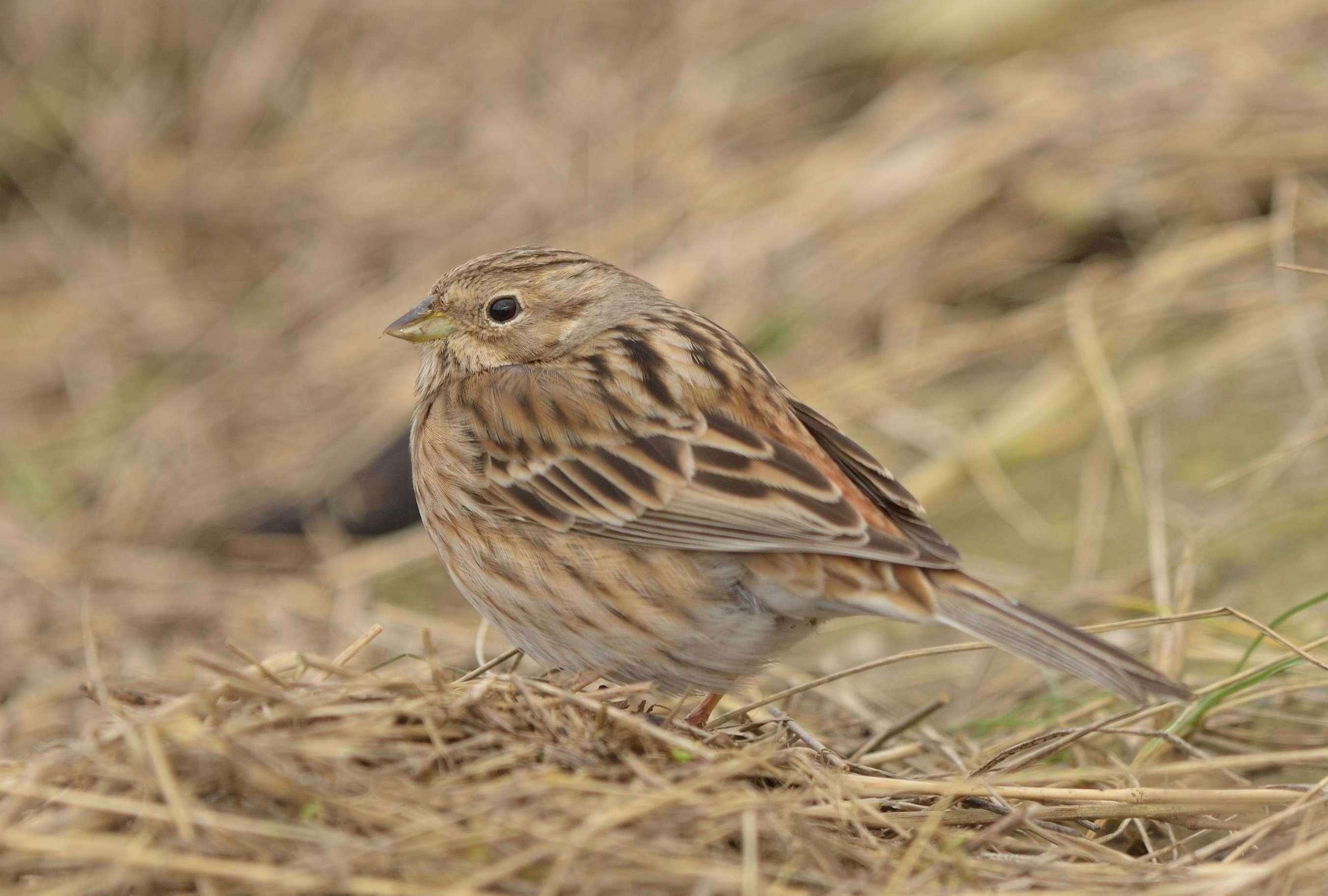 The Solitary Sandpiper continued near Almería, Spain, and the Double-crested Cormorant lingered another week at the west end of São Miguel, Azores. The Bateleur was still near Sde Moshe, Israel, over the weekend while arguably the most interesting piece of news concerned a couple of Ardeola herons at Jahra Pools, Kuwait, from 25th — opinion on identification is divided, but some believe them to be good candidates for Indian Pond Herons (photos here).