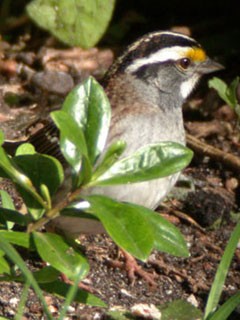 White-throated Sparrow: Caldy, Wirral. Hard on the heels of last year's well-watched bird at Flamborough Head, there can be few interested birders who have yet to see this species. This stunning male was a superb garden find. (Photo: Steve Williams)


The unsettled weather has finally given way to a ridge of sultry high pressure and the temperatures have begun to soar. The week was characterised by a few quality overshoots, their arrival facilitated by a large high pressure system over western Europe and Iberia, but these rarities were widely distributed.


A surprise find was the second White-throated Sparrow of the spring. A stunning male was found in a private garden at Caldy (Wirral) on the 22nd. Access to the garden was kindly arranged and this bird showed well until the evening of the 23rd. Presumably this bird had been ship assisted, and possibly "jumped ship" at Seaforth, before making the short trip across the Mersey to be found at garden feeders. This bird comes hot on the heels of the White-crowned Sparrow in Cork, Dark-eyed Junco on Out Skerries and the earlier White-throated Sparrow on Fetlar, making it an excellent spring for Nearctic sparrows. 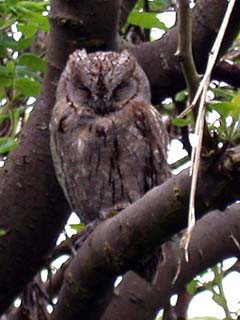 Eurasian Scops Owl: Unst, Shetland. This superb owl was found roosting in a clump of elders and allowed observers to watch it down to several feet. (Photo: Micky Maher)

Presumably arriving through the high pressure over Iberia, a Eurasian Scops Owl was present at Northdale on Unst (Shetland) from 23rd-25th and was only the third recent record for these islands (following one-day birds in 1988 and 2000). This bird was watched down to a matter of feet as it roosted in elders. Also associated with this weather system were three Little Bitterns. A 1st-summer male was on St Agnes (Scilly) on 22nd, 25th and 27th-28th, an exhausted bird was picked up at Dungarven (Waterford) on 24th (but died the following day) and a male was at Falmouth (Cornwall) from 22nd onwards. A Whiskered Tern continued the good run of excellent birds at Dungeness (Kent) with a summer-plumaged bird on the RSPB reserve from 28th. Gull-billed Terns were seen in Hampshire and West Sussex, with one at Littlehampton showing well on the 26th. Continuing with rare terns, there was a small arrival of White-winged Black Terns. These included two in Antrim on 23rd, which were later relocated in Down from 24th-25th. Others were seen in Anglesey and Ayr, and one lingered in Clyde from 26th, alternating between Lochwinnoch and Castle Seple Loch. Completing this week's rare tern sightings, up to three Forster's Terns were present at Lady's Island Lake (Co. Wexford), comprising an adult and two 1st-summers.

In what has been an amazing spring for Pallid Harriers, two further birds were found during the week. Birders on Unst were able to watch a 1st-summer male from 23rd-25th and a probable female was at Hatton (Aberdeenshire) from 28th. A Snowy Owl on St. Kilda (Outer Hebrides) on 23rd was the first record of this increasingly rare owl this year. Elsewhere, A Black Stork was seen over Ashdown Forest (E. Sussex) on 25th. The almost simultaneous detection of two Lesser Yellowlegs on the Exe Estuary (Devon) on the 23rd was interesting, and another was present on Islay from 25th onwards – had these birds just crossed the Atlantic? A Pectoral Sandpiper was on Fair Isle on 28th, a Grey Phalarope on North Ronaldsay on 25th and a Red-necked Phalarope at East Chevington (Northumberland) briefly on 28th. Fair Isle and North Ronaldsay also hosted Rustic Buntings, and a Thrush Nightingale was on Fair Isle from 25th-26th, with the bird at Gibraltar Point (Linconlshire) again heard on 23rd-24th. Woodchat Shrikes were seen in Dorset and St. Agnes and a Bee-eater was in Cornwall on 26th. A Red-rumped Swallow was seen past Capel le Ferne (Kent) on 27th. Scarce migrants were once again in short supply with most on Shetland. A dozen Red-backed Shrikes included five on Fair Isle and one in London, there were nine Icterine Warblers, five Bluethroats, five Common Rosefinches, eight migrant Golden Orioles, two Marsh Warblers and a Wryneck.


Of the long-staying rarities the White-crowned Sparrow was last seen on the 27th at Dursey Sound, the Iberian Chiffchaff remains at Kingswear (Devon) and the Great Reed Warbler likewise at Marton Mere (Lancashire). In Norfolk the Bonaparte's Gull was last reported on Hickling Rush Hills on 25th, but the 1st-summer remains in Co. Cork. The Rose-coloured Starling was again present in Argyll, being seen at both Kimelford and Seil Island. 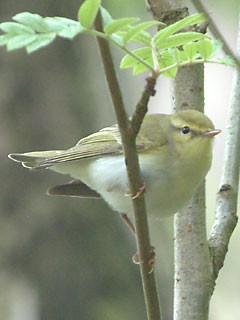 Wood Warbler: Errwood Reservoir, Derbys. Now is a good time of year to be out and about listening for the distinctive trill of the Wood Warbler. (Photo: Sue and Andy Tranter)