The weather remained rather summery so new arrivals were once again few and far between, with waders providing the main interest. Having said that, the drake Black Scoter remained off Blackdog (Aberdeenshire) to 23rd, along with up to four drake Surf Scoters.

The female Ruddy Shelduck remained at Grafham Water (Cambs) to at least 25th, with new birds at Coate Water (Wilts) on 21st and Minsmere (Suffolk) on 24th. The eclipse drake American Wigeon was again at Stilligarry, South Uist (Outer Hebrides) on 24th. The only other wildfowl of note were drake Ferruginous Ducks at Blagdon Lake (Somerset) to at least 26th and a new arrival at Paxton Pits (Cambs) on 23rd–27th. Less noteworthy was the long-staying Radipole Lake (Dorset) Hooded Merganser of unknown origin, which enjoyed the company of two South African Shelducks this week. 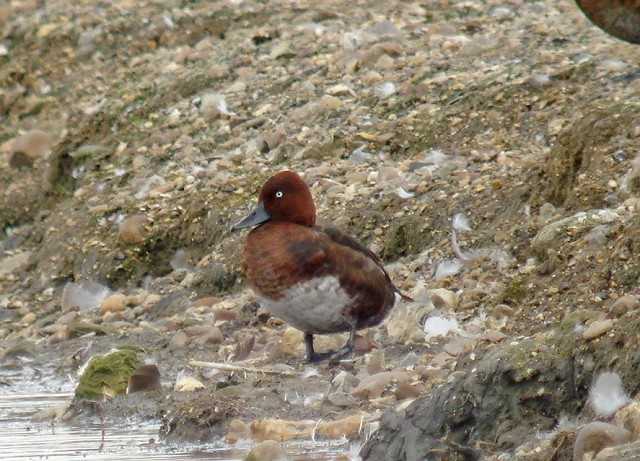 Numbers of rare seabirds continued to drop, although scare species were again reported in good numbers. Single Cory's Shearwaters were reported from Ainsdale (Lancs), Spurn (East Yorks), Porthgwarra (Cornwall) and Sheringham (Norfolk) on two dates. There were also two past Brownstown Head (Waterford) on 23rd and two past Ram Head (Waterford) on 27th. Regular seawatches off Porthgwarra produced peak counts of 32 Balearic Shearwaters, 12500 Manx Shearwaters, 13 Sooty Shearwaters and two Pomarine Skuas. Sooty Shearwaters continued to be recorded past North Ronaldsay (Orkney) this week, with up to 13 on 23rd. Other seabirds of note included yet another Wilson's Storm-petrel from the Scilly pelagic on 24th. There was added interest in the North Sea, with large numbers of Storm Petrels reported, including an exceptional 358 past Whitburn (Durham) on 26th. The same site also recorded up to 17 Sooty Shearwaters and 14 Velvet Scoters during the week. Further south, two Long-tailed Skuas past Flamborough (East Yorks) on 25th were noteworthy, hot on the heels of one on 23rd. Others were reported from Whitburn (Durham), Long Nab (North Yorks) and at Rosslare harbour (Wexford).

After a two-week absence, the juvenile Night Heron was again at Stodmarsh (Kent) on 25th. Apart from the regular bird at Dungeness (Kent), Great White Egrets were reported from Castell-du (Glamorgan) on 23rd, Llangennech (Carmarthenshire) on 24th–27th and Titchfield Haven (Hants) and Cowgrove (Dorset) on 26th. The adult Cattle Egret was pinned down on the Otter estuary (Devon) to 25th, with others also seen at Middlebere (Dorset) on 25th and again at Pagham Harbour (West Sussex) on 26th. One was also reported from Lodmoor (Dorset) on 25th. Just a single White Stork was reported, seen low over Emneth (Norfolk) on 22nd.

Up to 13 Spoonbills remained on Cley Marshes (Norfolk), with a similar number at Havergate Island (Suffolk). Singles and small groups were again widespread in the south and east, with three now in Montrose Basin (Angus & Dundee).

The juvenile White-tailed Eagle remained around Ruckland (Lincs) until at least 25th with a further report of a possible near Bradwell (Derbys) on 24th. Equally unexpected was a report of a Golden Eagle photographed over Helwith Bridge (North Yorks) on 23rd. Cornwall's Black Kite also resurfaced, reported over Sancreed on 26th, with another at Kennerleigh (Devon) on 23rd and possibles and probables reported from Bassingfield (Notts) and Eltham (London) on 23rd. A small flurry of Red-footed Falcons this week included birds at Inishbofin (Galway) on 22nd and over Rainham Marshes (London) on 26th, with further possibles reported from Gants Hill and Barking (London) on 24th–26th.

The Marsh Sandpiper remained at Blacktoft Sands (East Yorks) all week, alongside up to 12 Spotted Redshank and two Spoonbills. It may have also popped back to Alkborough Flats (Lincs), where a "probable" was reported on 21st. Also remaining in residence was the adult White-rumped Sandpiper at Saltholme (Cleveland), present to 24th. There was just a single Temminck's Stint, at Freiston Shore (Lincs) on 22nd. 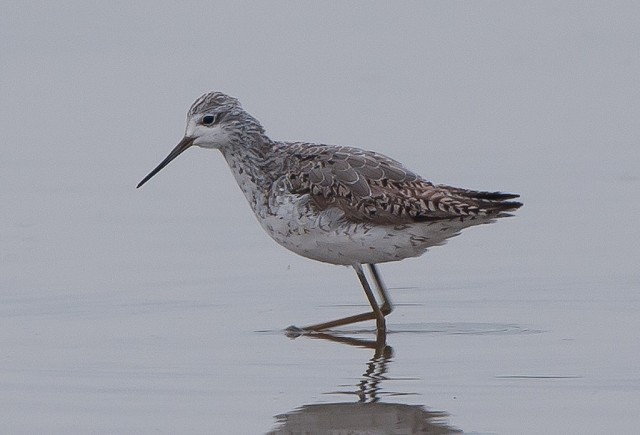 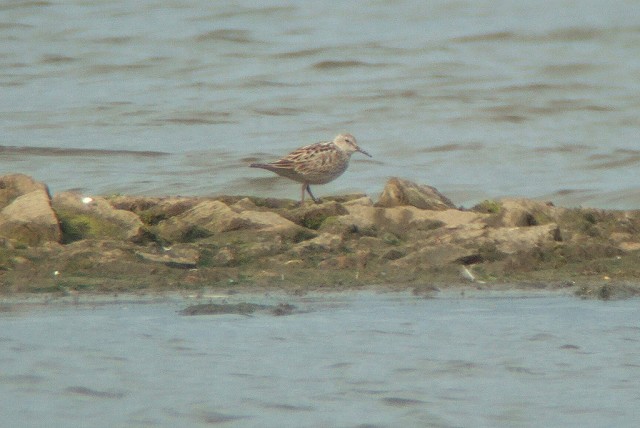 The Pectoral Sandpiper remained at Loch of Strathbeg (Aberdeenshire) to 21st and there was a further arrival of birds during the week, with five new birds turning up: at Loch of Tingwall (Shetland) on 22nd, Lady's Island Lake (Wexford) on 22nd–23rd, Dungeness (Kent) on 22nd–24th, Frampton Marsh (Lincs) on 25th–27th and Martin Mere (Lancs) on 25th–27th. But the wader highlight of the week was an adult Stilt Sandpiper at Lodmoor (Dorset) on 24th–27th (though it had probably been present on 23rd, identified as a Ruff). This is just the second county record, following an adult in Poole Harbour in August 2006. 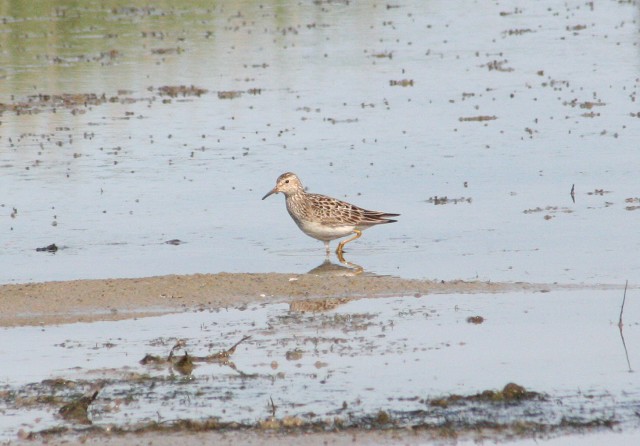 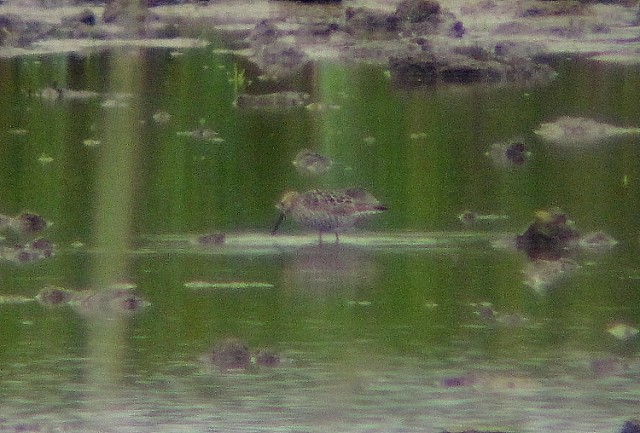 Despite the many rare waders to be savoured, the supporting cast of commoner migrants didn't disappoint. Peak counts of commoner species included up to 23 Green Sandpipers at Rutland Water and 20 at Elmley Marshes (Kent), the latter site also holding up to 13 Spotted Redshanks. There were also 15 Spotted Redshanks at Blacktoft Sands.

The second-summer Glaucous Gull remained at Budleigh Salterton (Devon) all week and the first-summer was also back at Dungeness (Kent). Others were at Peterhead (Aberdeenshire) on 21st–23rd, the Ugie estuary (Aberdeenshire) on 24th and Cross Lough, Mullet (Mayo) on 27th. The only Iceland Gull was at Gallan Head, Lewis (Outer Hebrides) on 23rd. All the summering Bonaparte's Gulls having seemingly departed, the only gulls of note were Ring-billed Gulls in Galway city to 24th and Ballycastle (Antrim) to 22nd. Numbers of Little Gulls in East Yorkshire continued to impress, with more quadruple-figure counts at Hornsea over the week including 4,060 offshore on the evening of 22nd and 3,500 on Hornsea Mere on 27th. In previous years, numbers have built up to almost 20,000 birds in August, so the spectacle is sure to continue over the coming weeks. 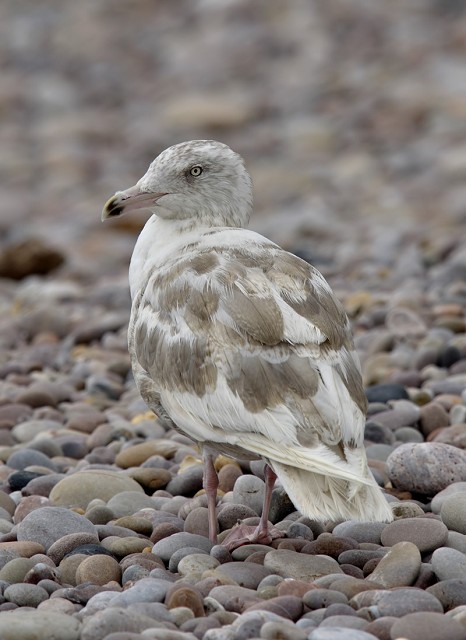 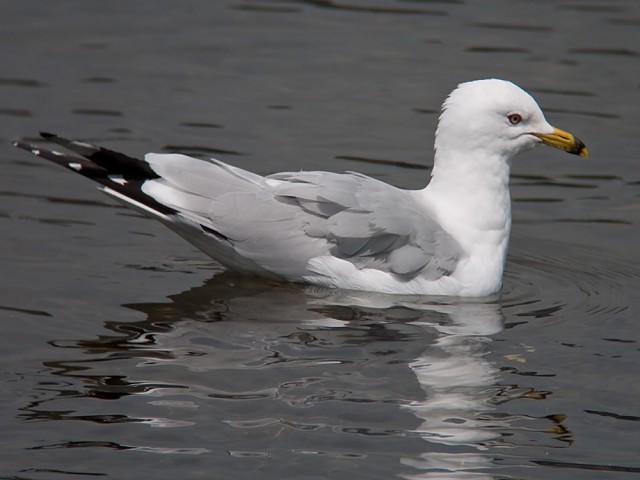 Although rarely reported, the adult male Snowy Owl is pretty much resident around Mangurstadh, Lewis (Outer Hebrides), where it was reported on 23rd. There was yet another, or the same, Bee-eater on St Mary's (Scilly) on 27th. A late report of a Hoopoe in Kidderminster (Worcs) on 21st may have been the same as seen briefly in flight at nearby Upper Bittell Reservoir (Worcs) on 23rd. There was just one Red-rumped Swallow, at Loch of Hillwell (Shetland) on 21st. 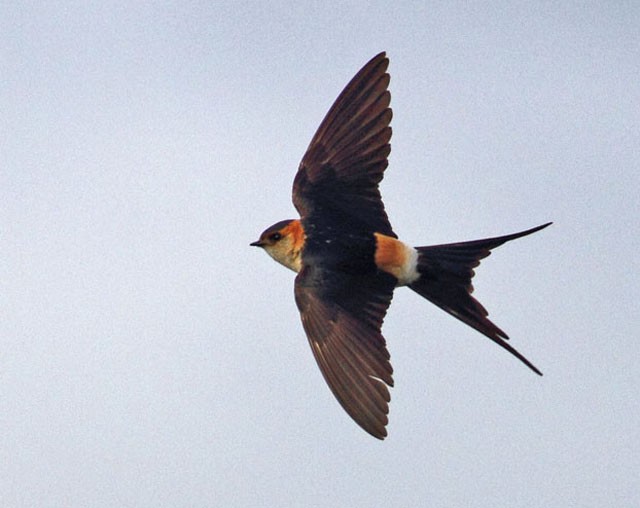 A long-overdue county first for Dorset was a Paddyfield Warbler found in a mist-net at East Fleet on 21st. Despite the small size of the reedbed, the bird was unfortunately not seen again, despite much searching. Another mist-net find was an adult Icterine Warbler at Sandwich Bay (Kent) on 27th. The Western Bonelli's Warbler continued to sing at Arnfield Reservoir (Derbys) to at least 26th.

The first-summer male Common Rosefinch remained near Melbourn (Cambs) all week and there was another reported from Balivanich, Benbecula (Outer Hebrides) on 27th. Following widespread reports in Finland and Norway and a massive 130 past one site in southern Sweden, a juvenile Two-barred Crossbill at Kilnsea (East Yorks) on 27th was hopefully the first of many this autumn. This is the first modern record for the county; there are three previous records between 1845 and 1898.

The adult Rose-coloured Starling remained at Ardnave, Islay (Argyll) to at least 23rd and there were several other new birds: a first-summer was at Inishbofin (Galway) on 21st–24th, and adults were on Stronsay (Orkney) on 22nd and the Otter estuary (Devon) on 23rd. 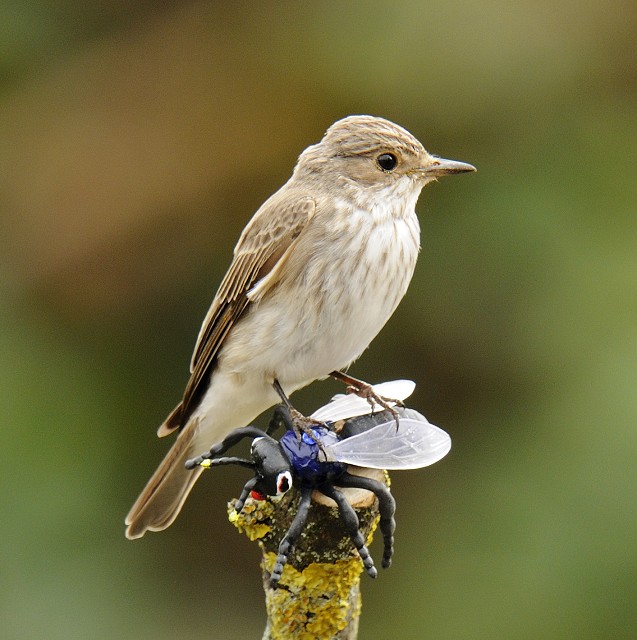 With 300 photo uploads since he started posting to BirdGuides less than two years ago, and many more images on his website, Herefordshire-based Mick Colquhoun is a prolific bird photographer. Although Mick has travelled to UK bird hotspots such as Norfolk, Shetland and the Scillies, he has taken many of his photos in his own garden. Mick is obviously serious about his bird photography but, despite this, his series of images of local Spotted Flycatchers shows he also has a sense of humour. Over the last week, we've wondered what's coming next as Mick uploaded shots of a flycatcher sitting on a can of flyspray and a box of flypaper. Our favourite, though, is his more subtle photo of a bird perched on a lichen-covered branch against a diffuse woodland backdrop. On first glance, this looks like a classic portrait shot of this species in its natural environment. On closer inspection, though, you realise the bird is actually perched on a plastic toy fly! As with all forms of humour, this won't appeal to everyone but, for cheering us up with his harmless fun, we're happy to award Mick his first Photo of the Week. 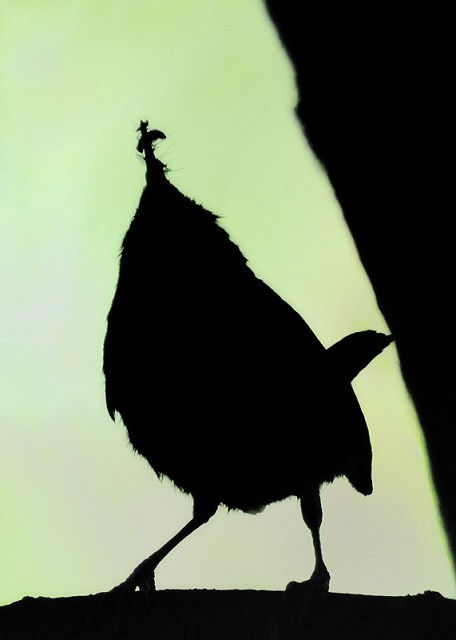 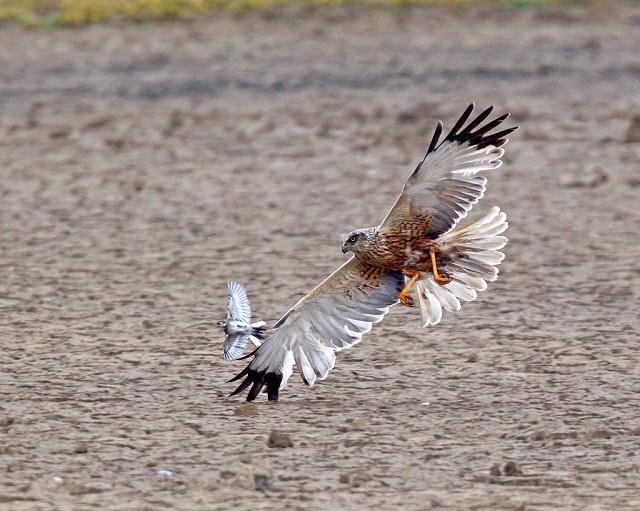 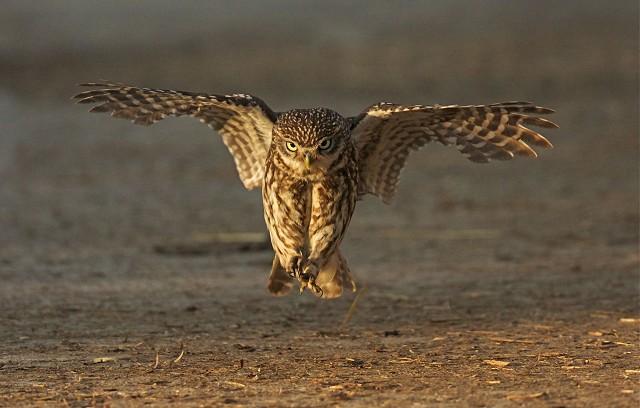 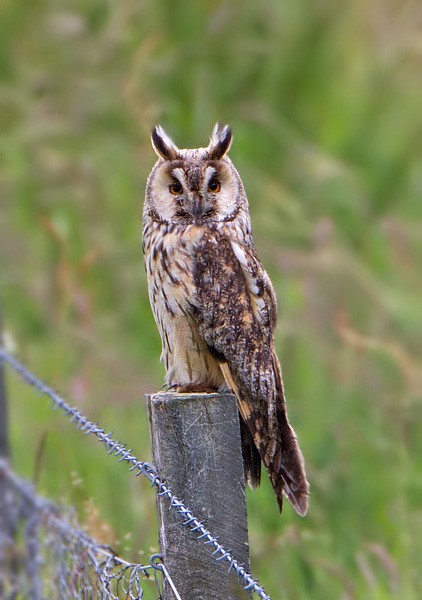 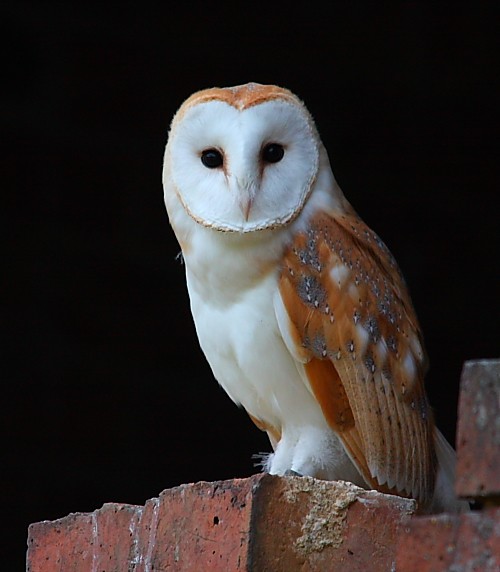 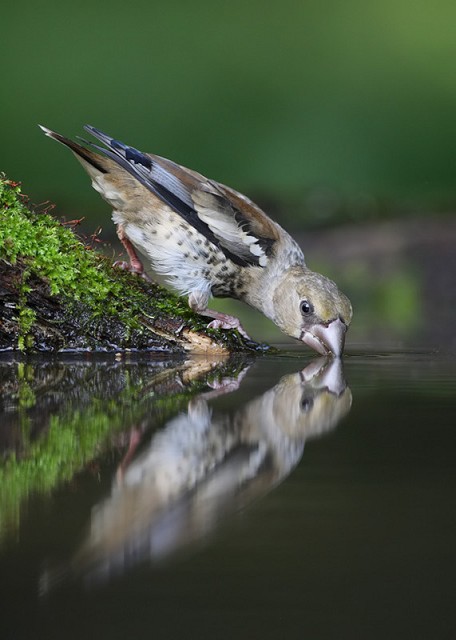 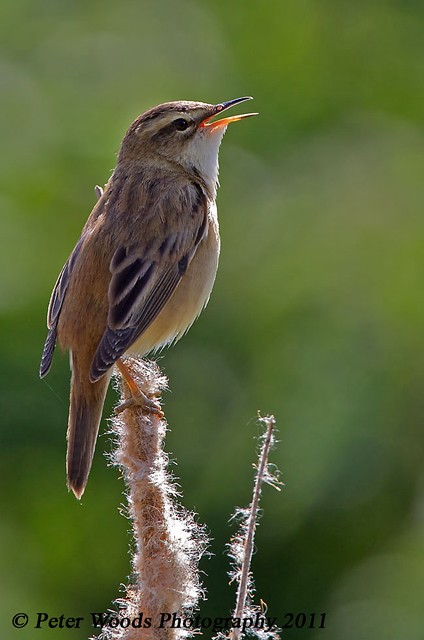 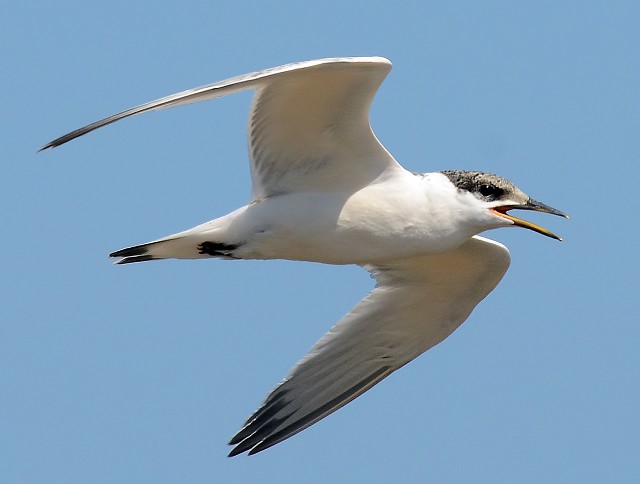 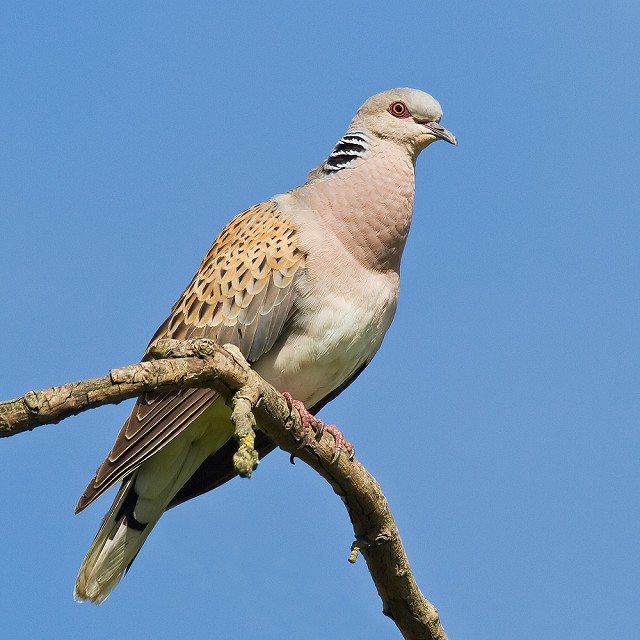 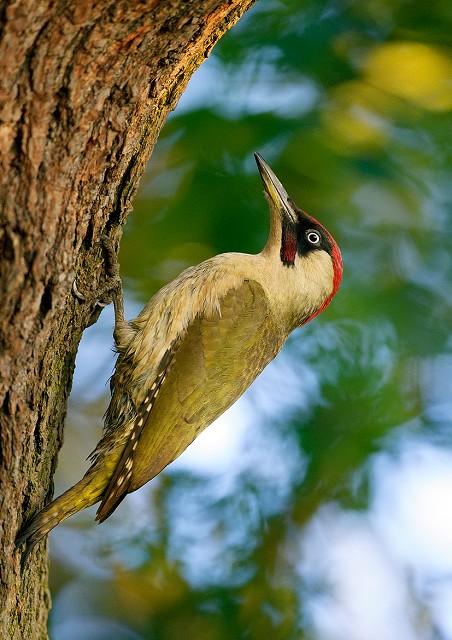 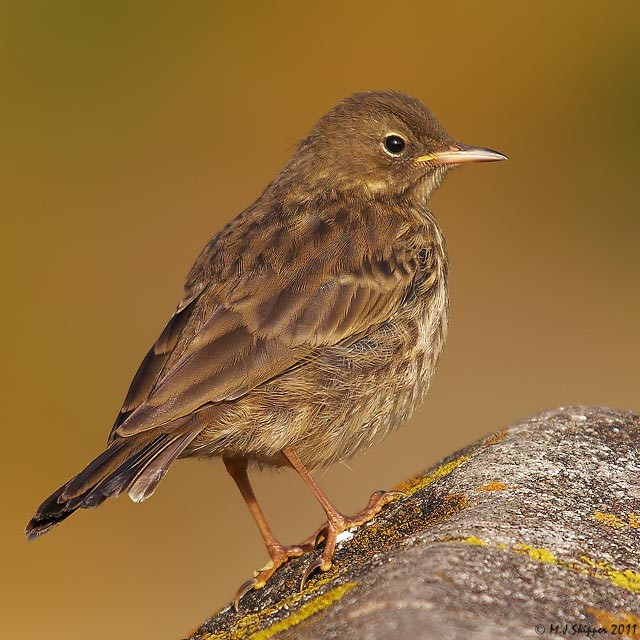 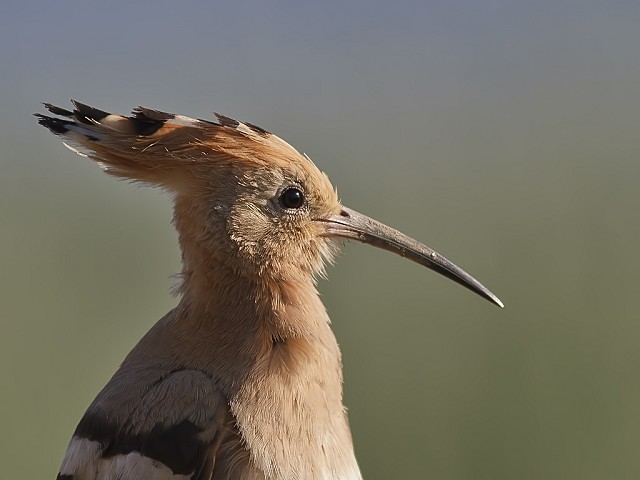 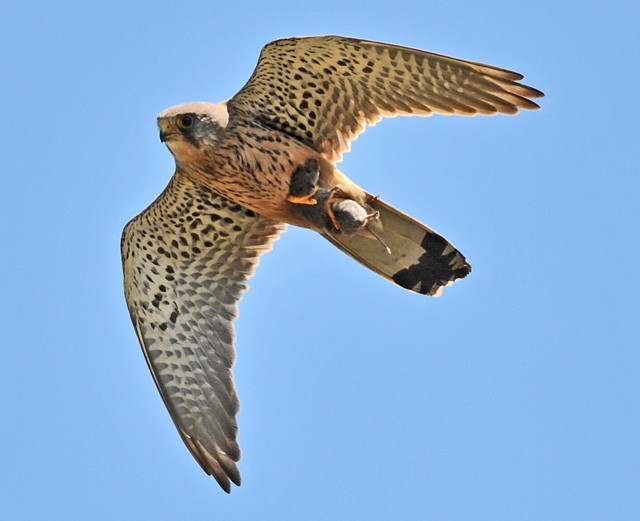 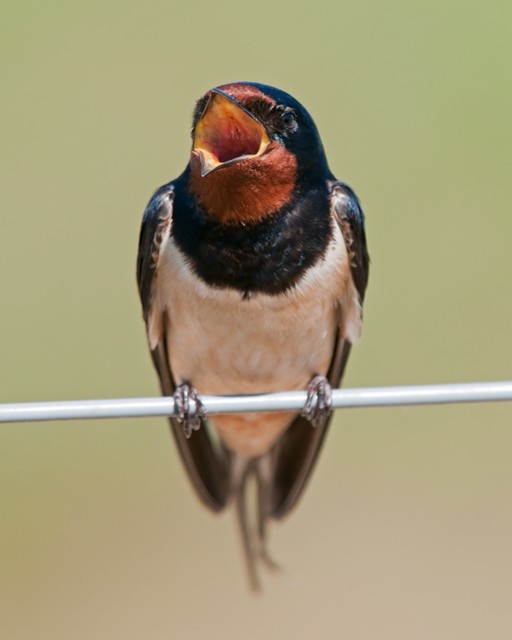 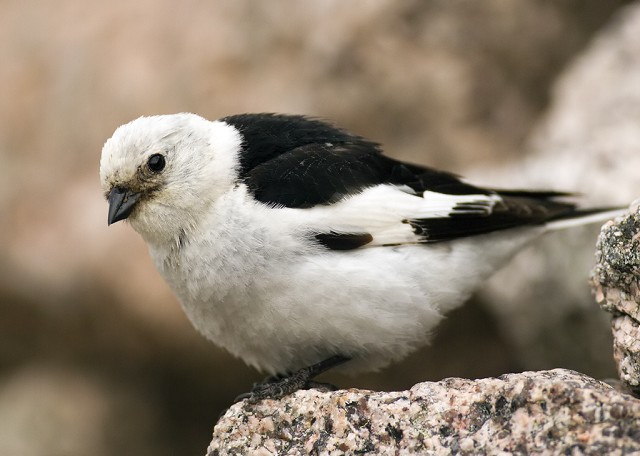 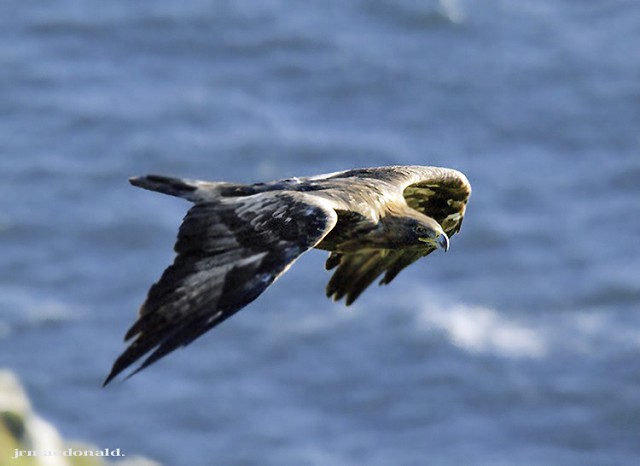