Proceedings continue to calm down gradually after a somewhat frenetic start to 2016, though there were still plenty of talking points — not least the juvenile Thayer's/Kumlien's Gull at Donmouth, Aberdeenshire. Identification seemed fairly well settled on thayeri in midweek, particularly with several convincing perched shots emerging, but subsequently a series of excellent flight shots caused niggling doubt — for example the tail band was broken, marbled and rather milky and the secondaries often appeared decidedly pale. 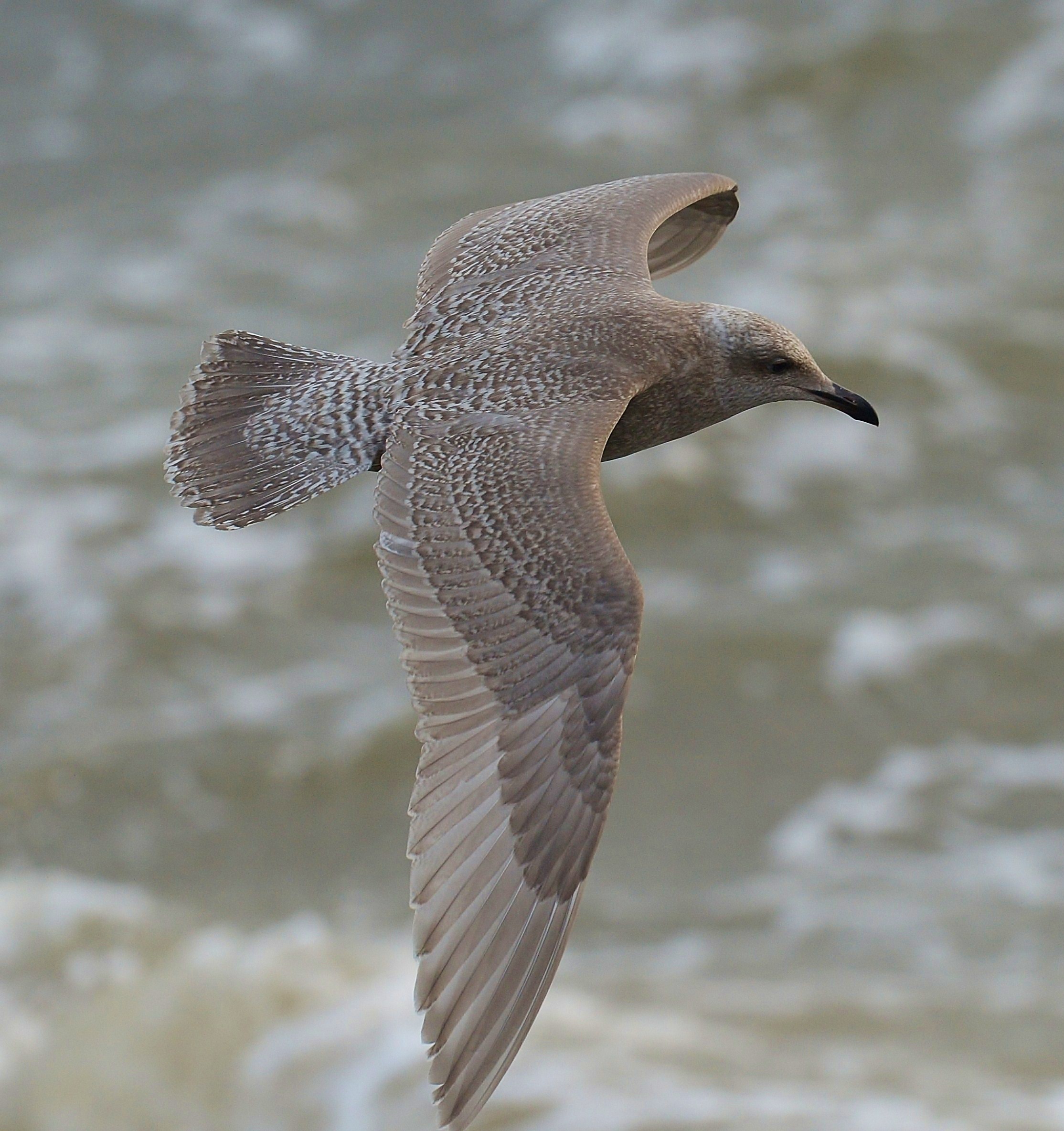 As is so often the case with these birds, one could argue that there is no right or wrong answer — the Thayer's/Kumlien's/Iceland complex is seemingly a continuous spectrum of phenotypes on which dividing lines are difficult to draw. A bird like this might understandably be overlooked as thayeri on a Californian beach but, in North-East Scotland, where scrutiny is always going to be more intense, it may not make the grade because of such minor details as those already mentioned. One thing is for sure — whatever it is, and wherever it's from, it's a great-looking bird that has helped enrichen British birders' experience and understanding of these troubling taxa just that little bit more. 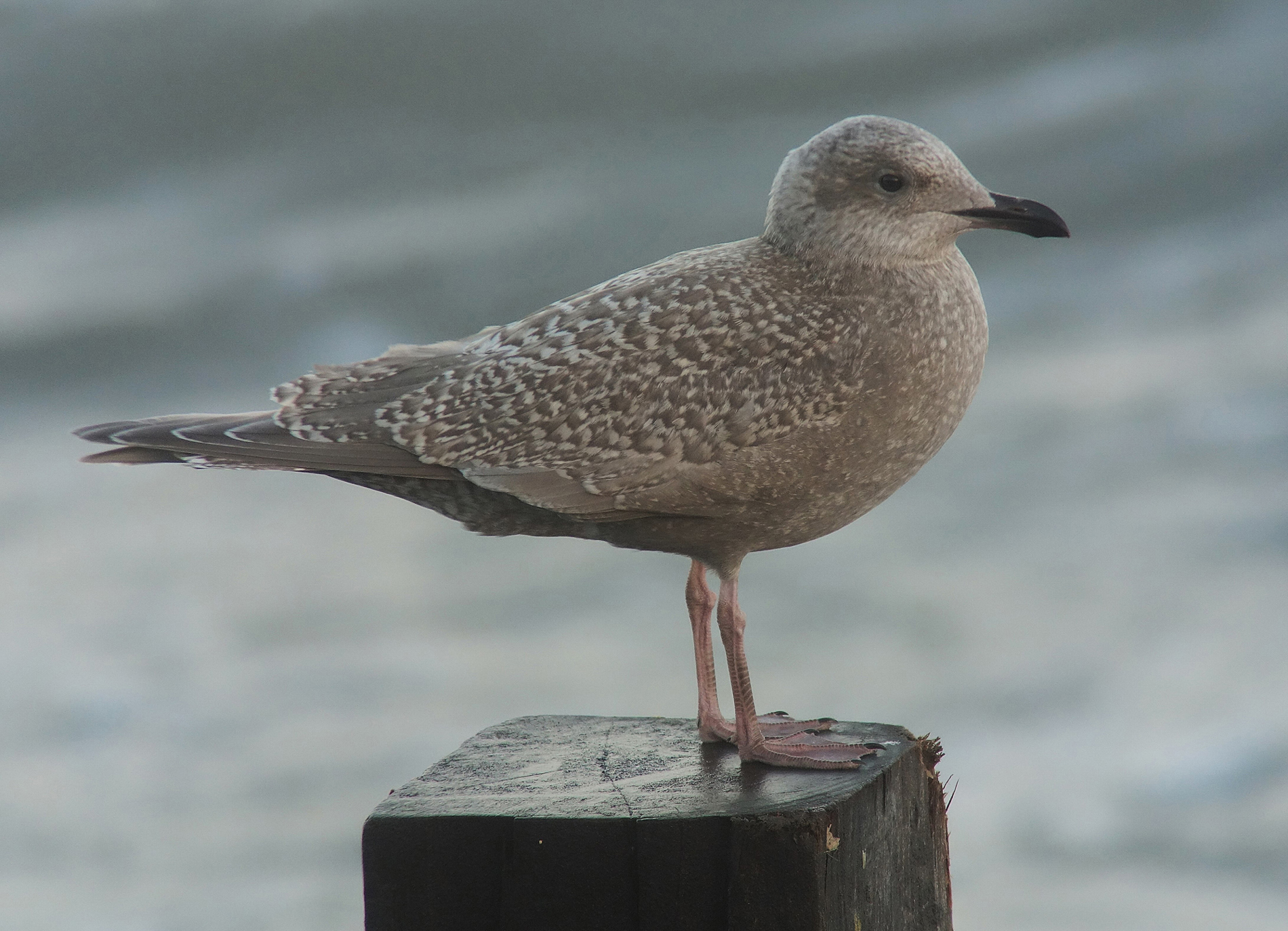 With no sign of the Vega Gull again this week, it was down to Castletownbere's Glaucous-winged Gull to lead the line for Irish rare bird sightings, the bird still present and showing well until at least Monday. The Hook Head area of County Wexford actually did very well, if Vega-less, producing a first-winter Ross's Gull on 20th followed by an adult Bonaparte's Gull on 23rd.

Cornwall's Pacific Diver was still off St Michael's Mount on 22nd but not since; the Hudsonian Whimbrel was also still in the vicinity until at least Monday, often alongside a single member of its Eurasian congener.

A White-billed Diver at the mouth of Weisdale Voe, Shetland, on 20th was the only individual reported this week. A drake King Eider was found offshore near Ballyconnell, Co Sligo, on 20th and was still present on Sunday; the immature female also remained off Rosslare, Co Wexford, and the adult female off Ruddon's Point, Fife. Immature drake Surf Scoters remained off the Isles of Scilly and Filey, N Yorks, and adults were still in Conwy, Lothian and Orkney. 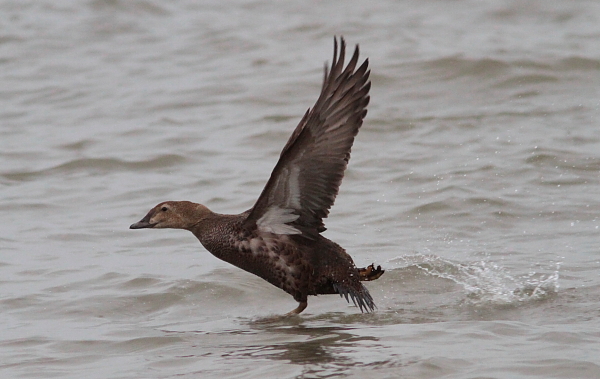 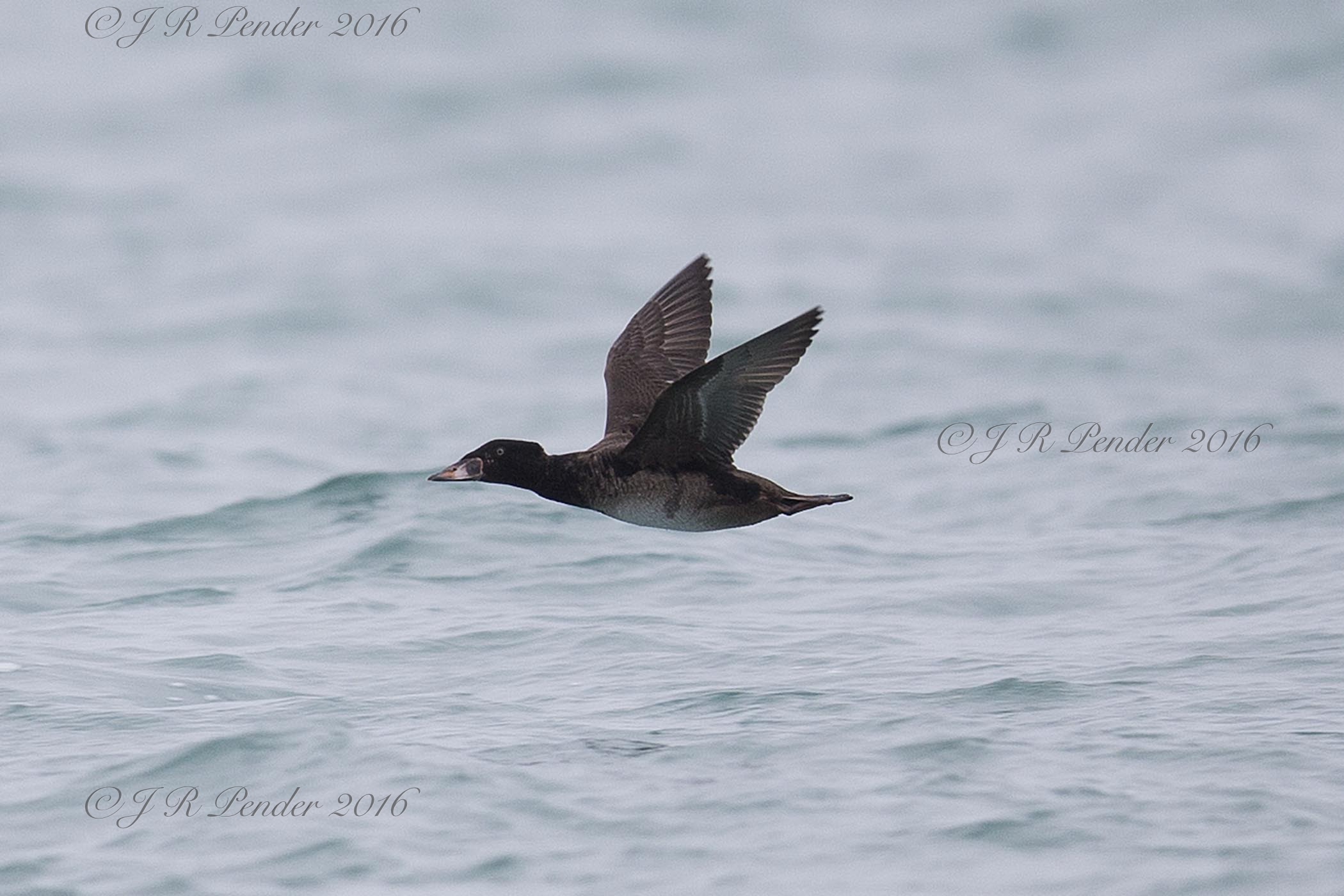 A drake Lesser Scaup was found at the impressively named Tullaghnafranknagh Lough, Co Galway, on 24th, while others remained in Cardiff and on Dozmary Pool, Cornwall. A nice group of three Ring-necked Ducks, including a drake, were at Ashton's Callows, Co Tipperary, on 20th. A female was new at Uttoxeter, Staffs, on 23–24th, while drakes near Trabboch in Ayrshire, Loughrea in Co Galway, and at Lough Arrow in Co Sligo are probably returning birds from previous winters. Elsewhere two females remained in Hampshire and males were in Berkshire, Kinross and Dumfries & Galloway. Drake Ferruginous Ducks continued in Hampshire and Durham. There was a report of a Bufflehead from Grune Point, Cumbria, on 24th but this may well be the presumed escape seen in the county recently. 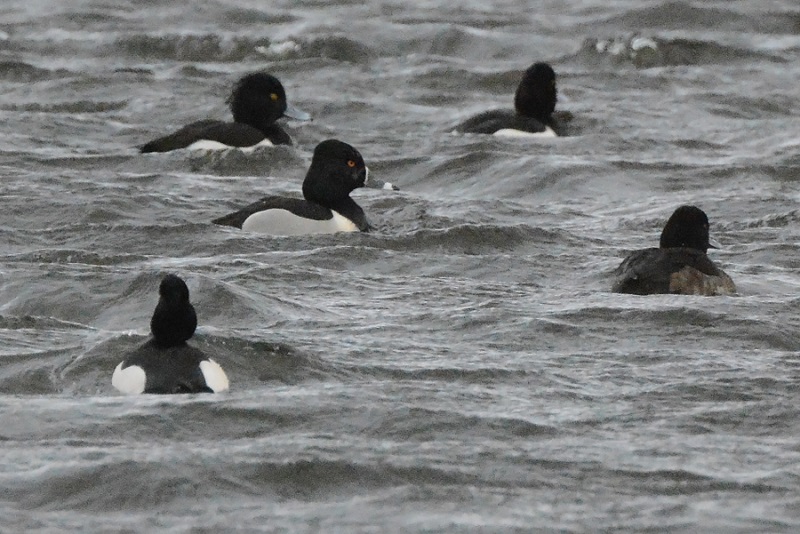 No fewer than 11 American Wigeon were reported, all drakes, including two together on North Uist on 24th and a new bird at Gaddon Loch, Fife, from 21st. The young male continued to show well at times at Bowling Green Marsh, Devon, with others in Lancashire, Northumberland, Highland (2) and Counties Wexford, Waterford and Leitrim. At least a dozen Green-winged Teal included new drakes near Portmahomack, Highland, and at Berry Fen, Cambs, both on 24th. 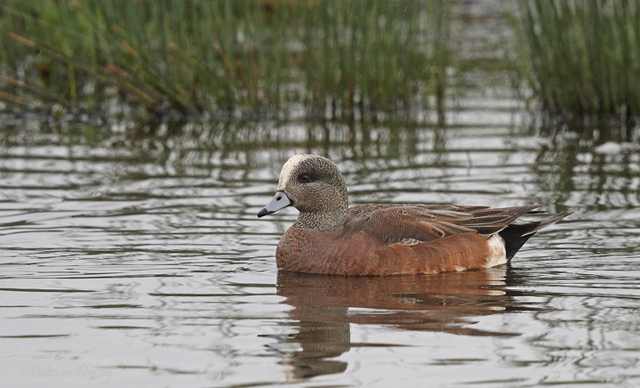 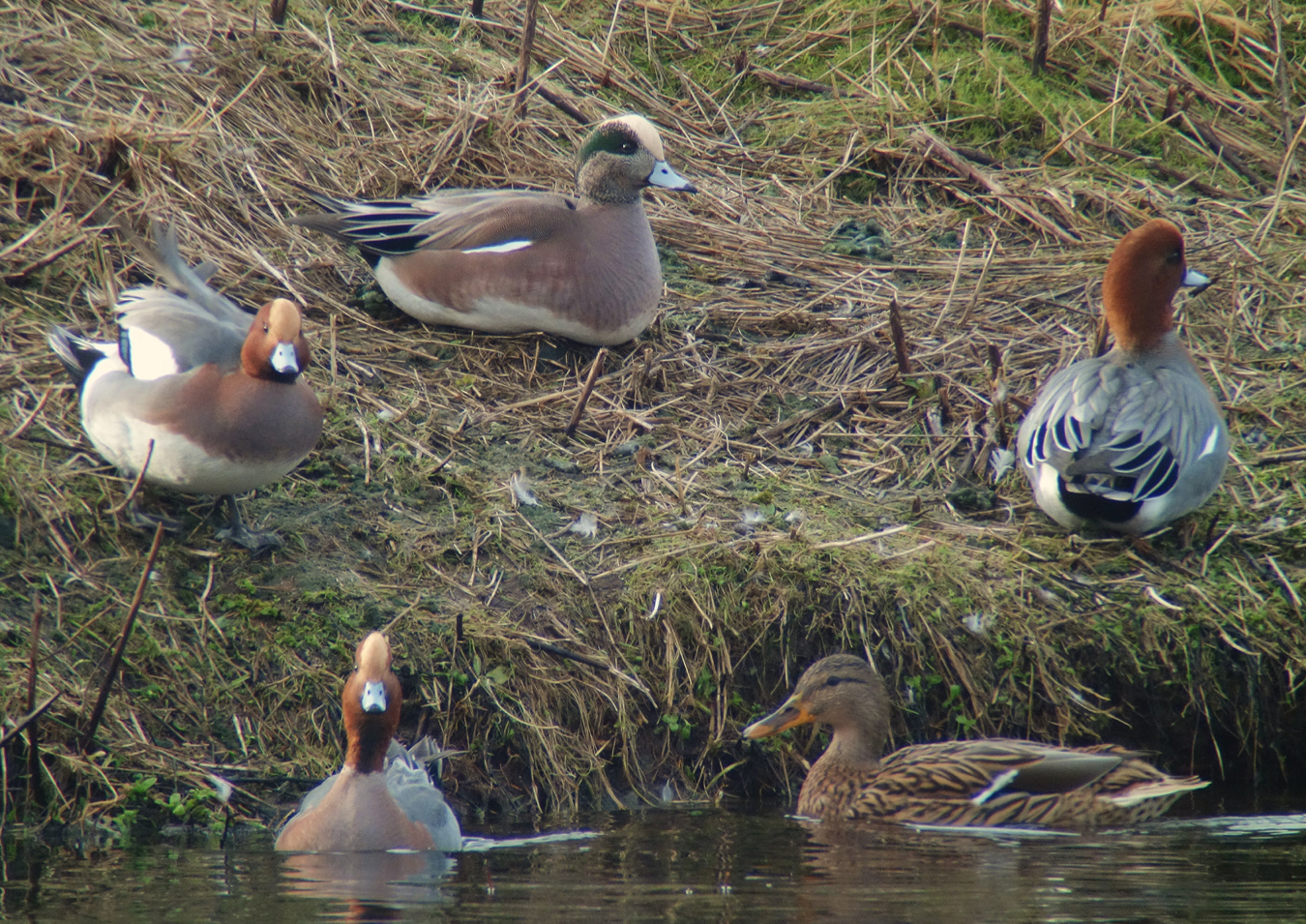 A white-morph Snow Goose was again near Kirkwall, Orkney, on 24th and the Cumbrian bird was at Salt Cotes on the same day. A Richardson's Cackling Goose continued in Co Sligo, with another seen again on Islay on 23rd, and the Ridgway's Cackling Goose still at West Freugh, Dumfries & Galloway, on 23rd. Three possible Todd's Canada Geese were among Barnacle Geese at Dunfanaghy, Co Donegal, on 20th.

Suffolk's Cattle Egret hung around at Iken throughout the week and others were still in Co Limerick and Somerset. Another flew over Oakham, Leics, on 22nd. Six Glossy Ibis were at Timoleague, Co Cork, from 23rd; eight remaining at Castlemartyr that day perhaps explain where the Timoleague birds came from. Records were otherwise quite widespread from Ireland (they were reported from six counties), while in Britain a new bird was at Sheppey, Kent, on 20th. 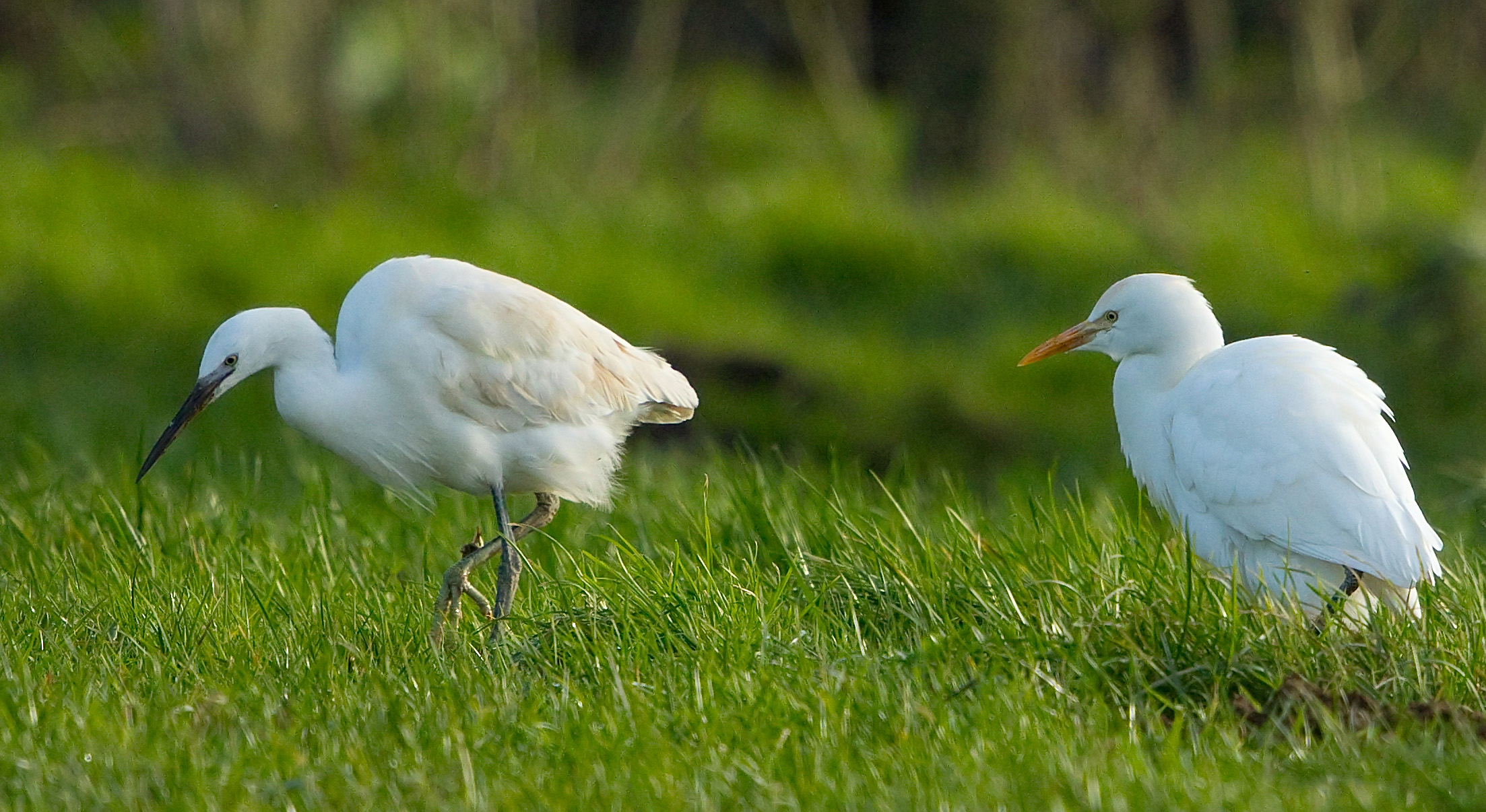 The white-morph Gyr Falcon was again at Bornish, S Uist, on 24th. Both the Pallid Harrier at Flitcham, Norfolk, and the male Northern Harrier on North Ronaldsay, Orkney, were still around this week, the former being reported daily. At least seven Rough-legged Buzzards were noted, including one as far south-west as Postbridge, Devon, on 22nd. 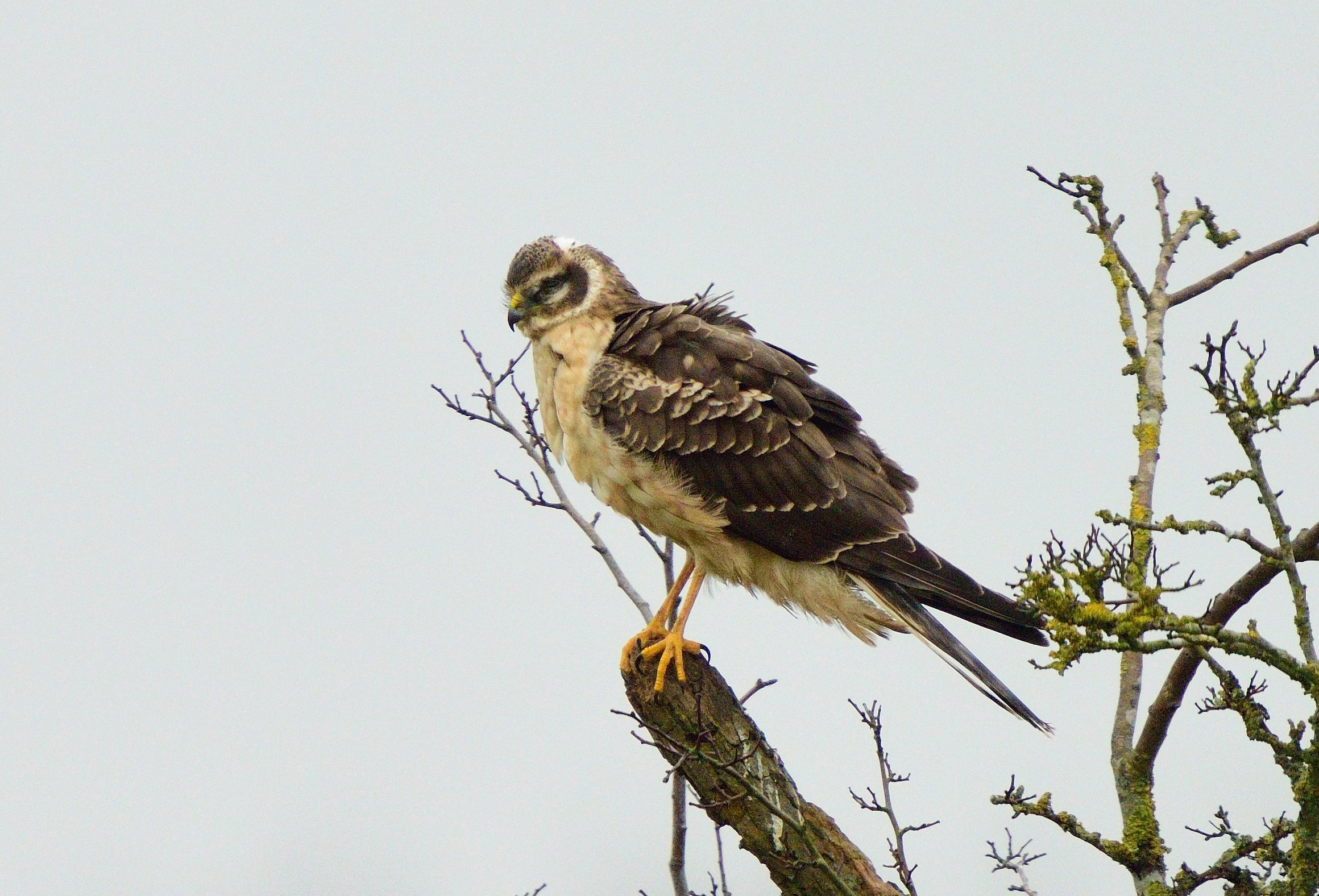 The Lesser Yellowlegs continued to range widely around Breydon Water, Norfolk, while a Long-billed Dowitcher was a new find on Stronsay, Orkney, on 24th. The Northumberland bird was still at Cresswell Pond on 26th, but the Hampshire bird was last noted at Pennington Marshes on 20th. Of the Grey Phalaropes seen, a continuing first-winter at Cley, Norfolk to 23rd was the most co-operative. 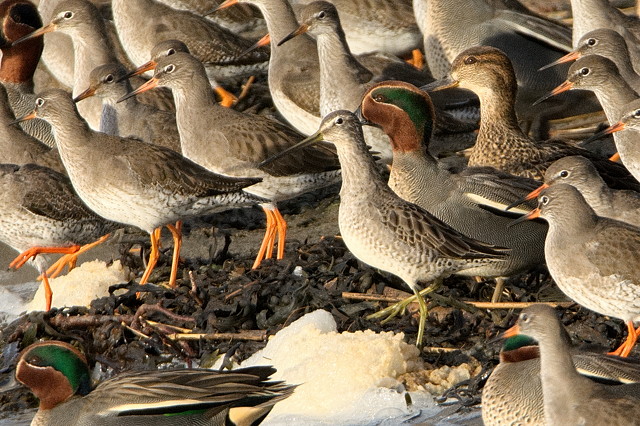 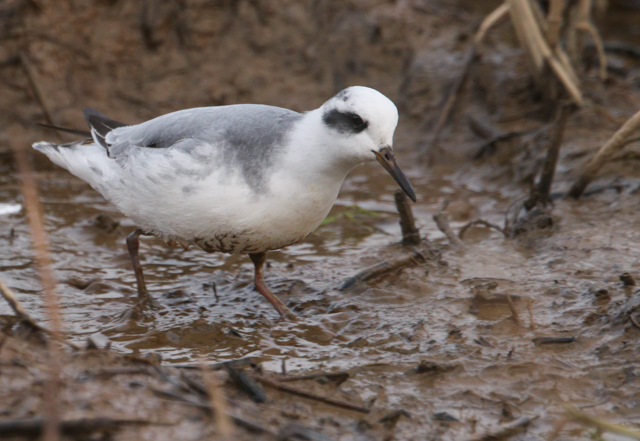 A smart second-winter Franklin's Gull was unearthed on the Cashen Estuary, Co Kerry, on 24th and was still present in the area on 26th. The Bonaparte's Gull continued in Devon and the Forster's Tern was again briefly at Doorus, Co Galway, on 25th.

A minimum of three Ring-billed Gulls remained around Tralee, Co Kerry, with birds recorded at two further sites around the county. Others were noted in several Irish counties while in Britain, two (an adult and second-winter) roosted at Chew Valley Lake, Somerset, on 21st. The showy second-winter continued in Preston, Lancs, and adults were present in Hampshire, Pembrokeshire and Clyde. A new adult was at Seaton, Cornwall, on 24th. 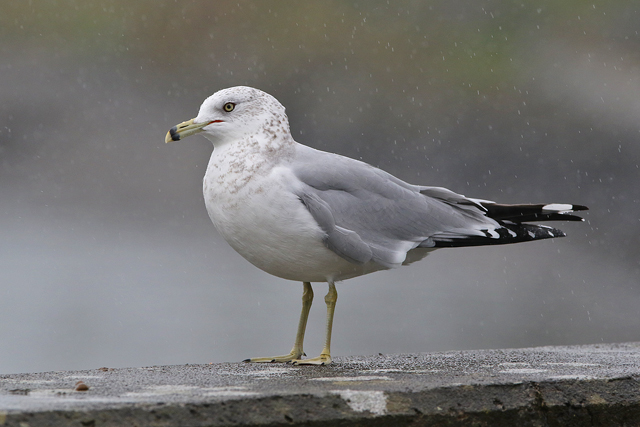 After having been absent last year, the fourth-winter Kumlien's Gull returned to Barmston, E Yorks, on 23rd. Juveniles also continued in Cambridgeshire and Yorkshire and at least three were in Ireland. Similar numbers of both Glaucous and Iceland Gulls were noted, with about 70 of each.

The Hoopoe lasted another week at Wall Heath, Staffs, while Shore Larks remained in Norfolk, Cleveland and Kent. Three Richard's Pipits were still at Flamborough Head, E Yorks, on Sunday, while a single bird remained on Sheppey, Kent.

Also on Sheppey the Richard's Pipit remained at Swale Nature Reserve; the recent duo at Flamborough Head, E Yorks, were impressively joined by a third bird from 15th. The Barn Swallow at Cheddar Reservoir, Somerset, on 13th must have felt a little chilly. Shetland's Black-bellied Dipper continued to frequent burns near Voe, and another Dipper was reported on South Ronaldsay on 18th.

There was no sign of the Cheshire Pallas's Warbler this week, but the Dusky Warbler continued to show on and off at Ham Wall, Somerset. Just three Yellow-browed Warblers were reported this week, including a London record from Gidea Park on 25th — others were still in Hampshire and Cornwall. About 15 Siberian Chiffchaffs were noted. 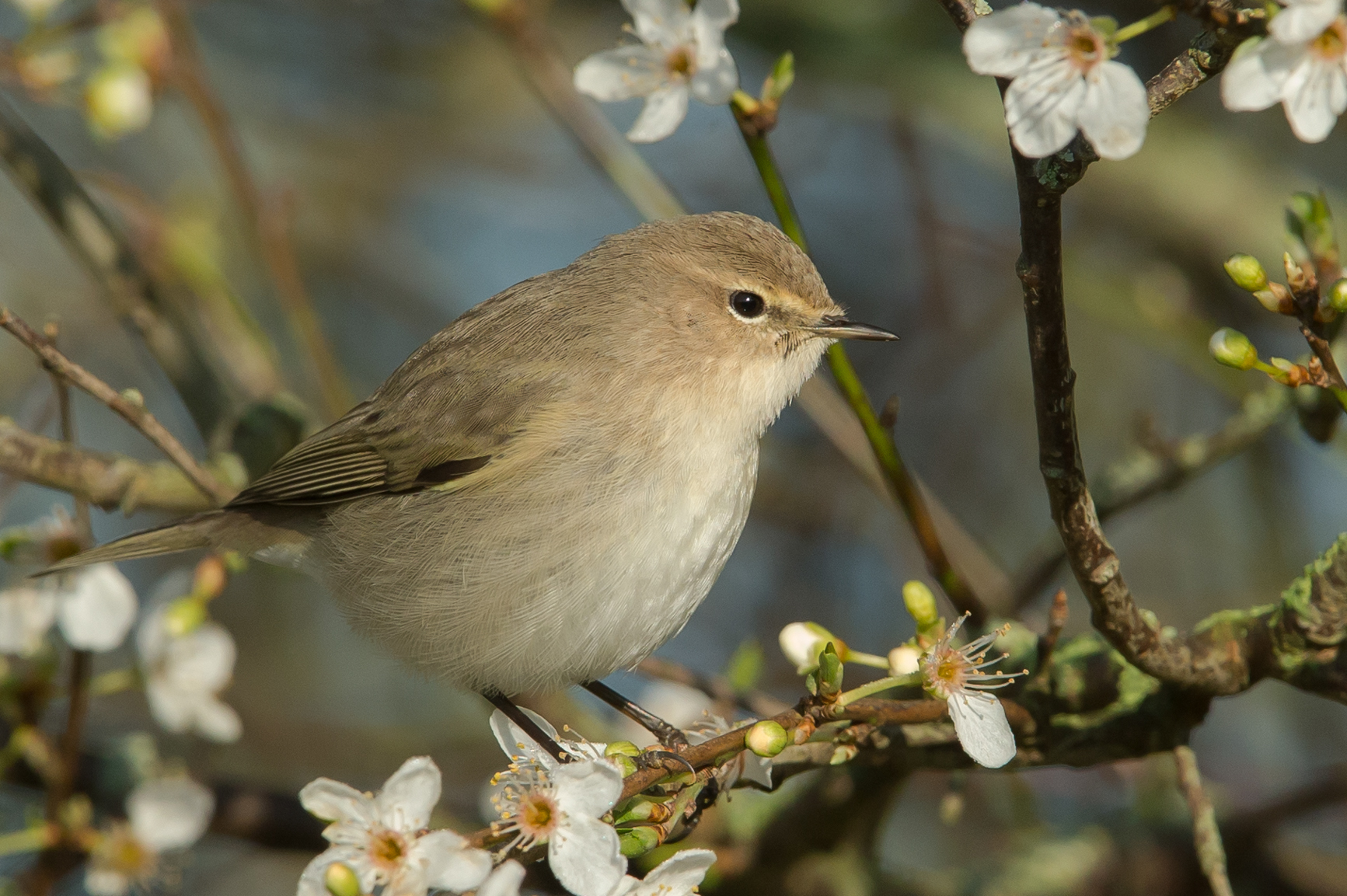 Four Penduline Tits were still at Titchfield Haven, Hants, on 20th with two thereafter; two also prolonged their stay on the outskirts of Gloucester until at least 25th, and one was still at Dungeness, Kent, on 24th. 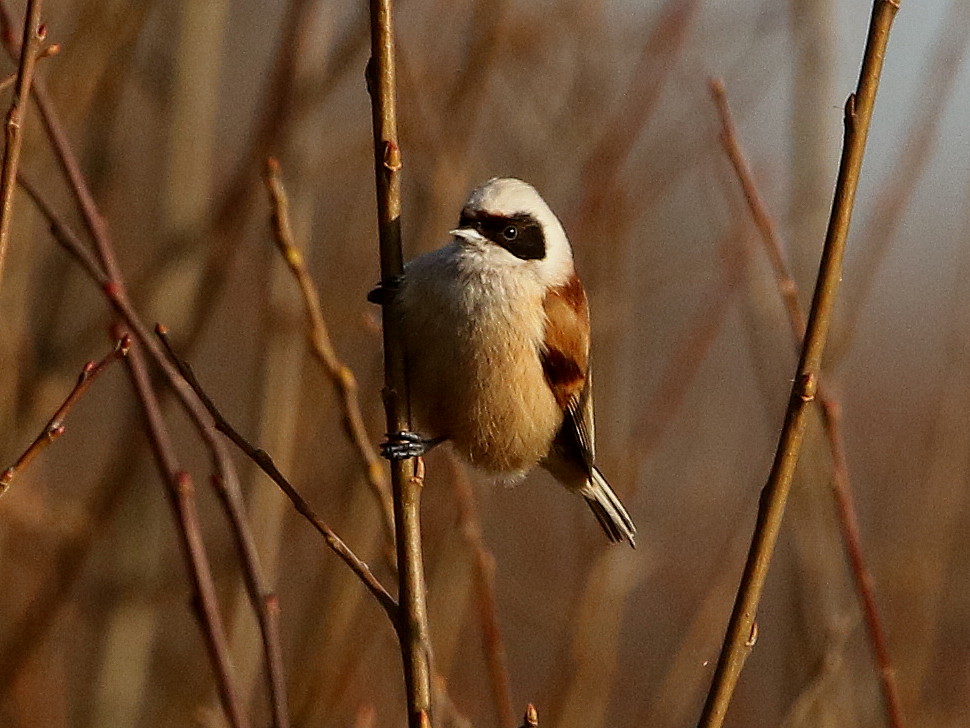 The Coues's Arctic Redpoll was still frequenting a game crop at Birling Carrs, Northumberland, to 25th, and there was belated news of another seen in Norfolk in mid-December. With no news on the two at Fen Drayton, only the Downham Market European Serin was available for birders this week. The elusive Little Bunting was again at Darts Farm, Devon, 20–21st, but not again since. 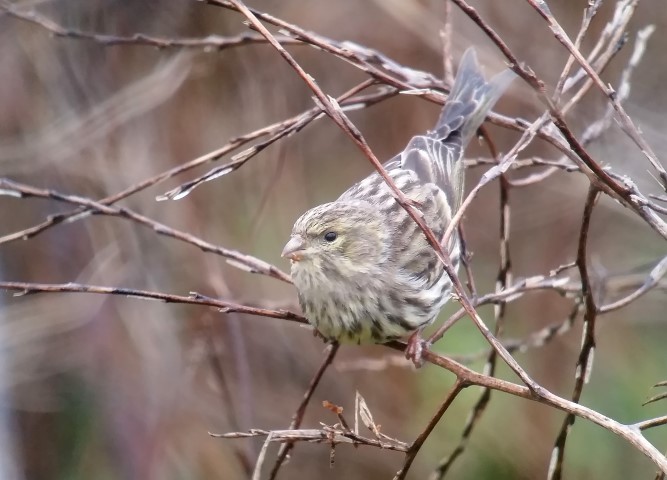 Star of the show was again the male Siberian Rubythroat in the Netherlands, which continued to perform superbly to all-comers in Hoogwoud, north of Amsterdam. In a true Euro-twitch, birders came from many neighbouring countries over the weekend (for example Sweden, Denmark, Poland, Belgium, France and the UK) to pay their respects to what may well turn out to be one of the birds of the WP year. 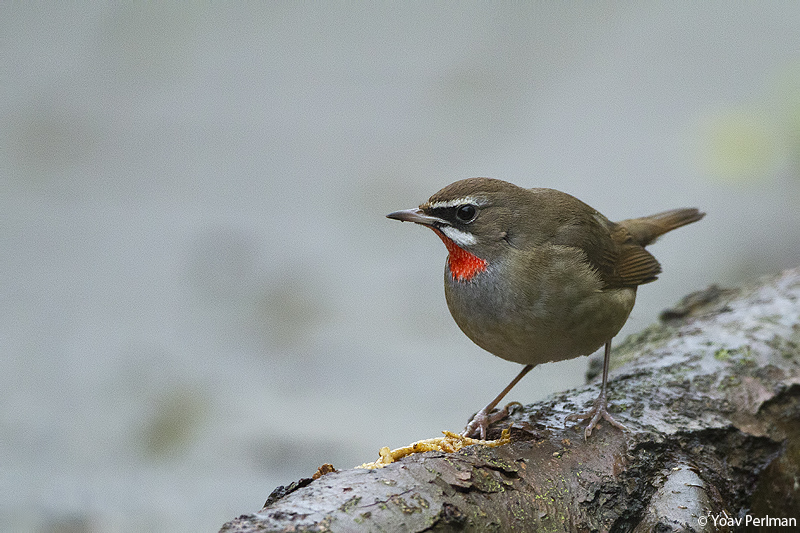 What looks to be Germany's first Syrian Woodpecker was identified from photos in a Bavarian garden in November, though the bird was apparently still present on Tuesday. Black-throated Thrushes were noted in Denmark and Norway, the latter also hosting the continuing Oriental Turtle Dove near Bergen.

The pair of Hooded Mergansers graced their fourth Azorean island when they arrived on Pico on 24th. The archipelago also produced Double-crested Cormorant, American Coot and a Siskin. Other news included an Indian Roller at Abdaly, Kuwait, on 21st and an adult Cape Gull at at Agadir, Morocco, on 25th — further evidence that this species is regularly straying north along the Atlantic coast of north-west Africa. Unfortunately last week's confiding Allen's Gallinule was found in a poor state mid-week and one suspects it would not have lasted long. 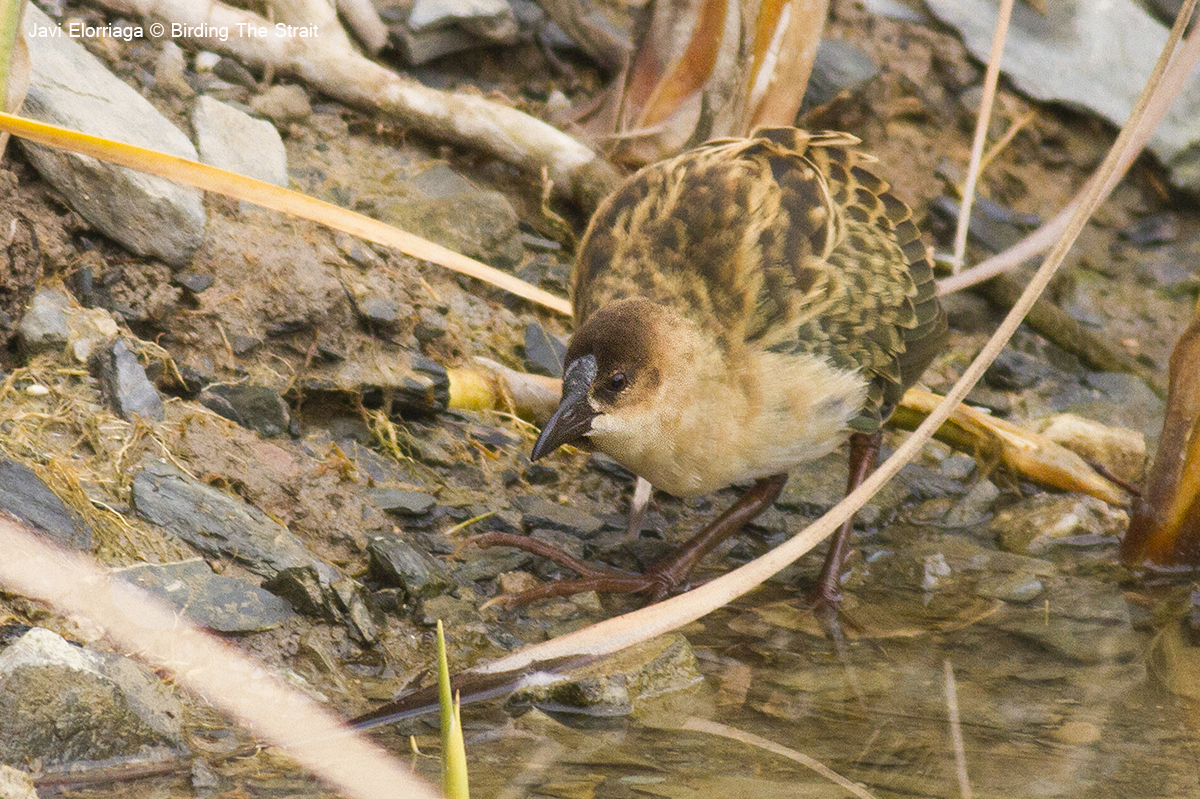