Review of the Week: 2–8 December

Both of last week's star finds were still present at the end of Tuesday, although the American Bittern at Castlefreke, Co Cork, had been missing for five days before it was seen again on its favoured lake in the late afternoon on 3rd. From then on it showed well at times but, rather typically for a bittern, spent long periods unobtrusively out of view. 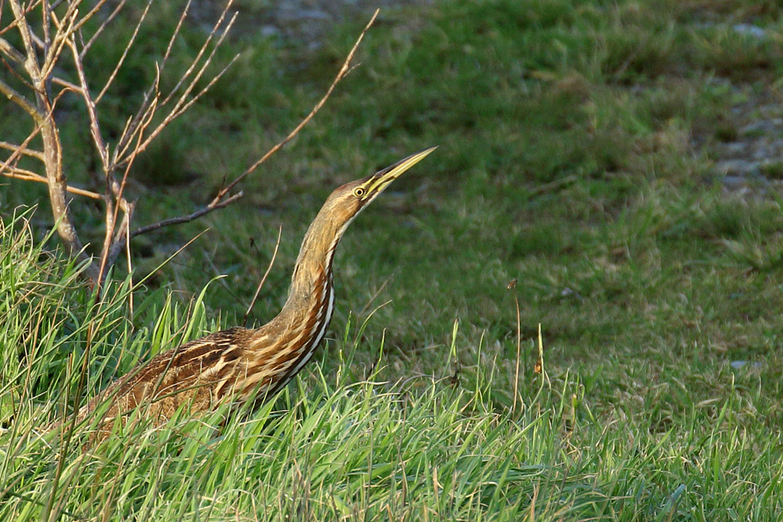 The meena Oriental Turtle Dove at Scalloway, Shetland, sounded altogether more straightforward. Though not reported every day, this infrequency appears attributable to a lack of observer coverage rather than the bird being difficult to pin down — indeed, it appears to be showing extremely well whenever birders visit. 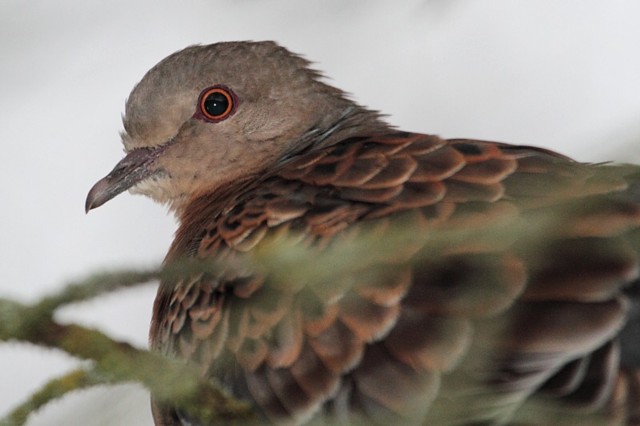 Find of the week was undoubtedly the Black-browed Albatross that passed Castlegregory, Co Kerry, late in the afternoon on 8th; the bird was last seen heading for Rough Point. Cornwall's Pacific Diver was reported with some consistency throughout the week — or at least until Sunday, with no sign in Mount's Bay on 7th. No doubt it is still about somewhere locally. Continuing on the long-stayers theme, the Greater Yellowlegs seems well settled at Whippingham, IoW, and was still in its usual spot on the River Medina on 4th.

A juvenile drake Surf Scoter was found off Hartlepool Headland, Cleveland, on 4th and seen intermittently to 7th; a drake remained off Joppa, Lothian, all week, and up to two males were off Colwyn Bay, Conwy. 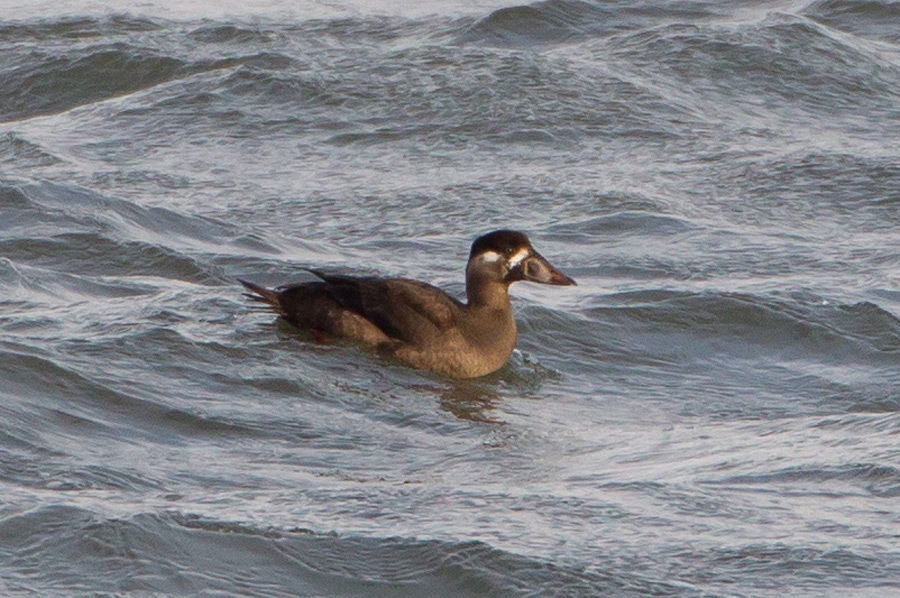 Drake Lesser Scaup continued at Lough Gill, Co Kerry, and Loch of Houlland, Shetland; a probable female was at Lough Corrib, Co Galway, on 6th. A total of six Ring-necked Ducks included the two females still at Rooksbury Mill, Hants, all week and drakes remaining in Berkshire, Dumfries & Galloway, Orkney and Co Donegal; there was no sign of the recent Perthshire bird at Pitlochry on 4th. The female Ferruginous Duck, sporting a suspiciously pale face, remained at Dagenham Chase to 3rd, and the male was still at Blashford Lakes, Hants; another drake at Dinton Pastures, Berks, from 6th was found to be wearing a ring. 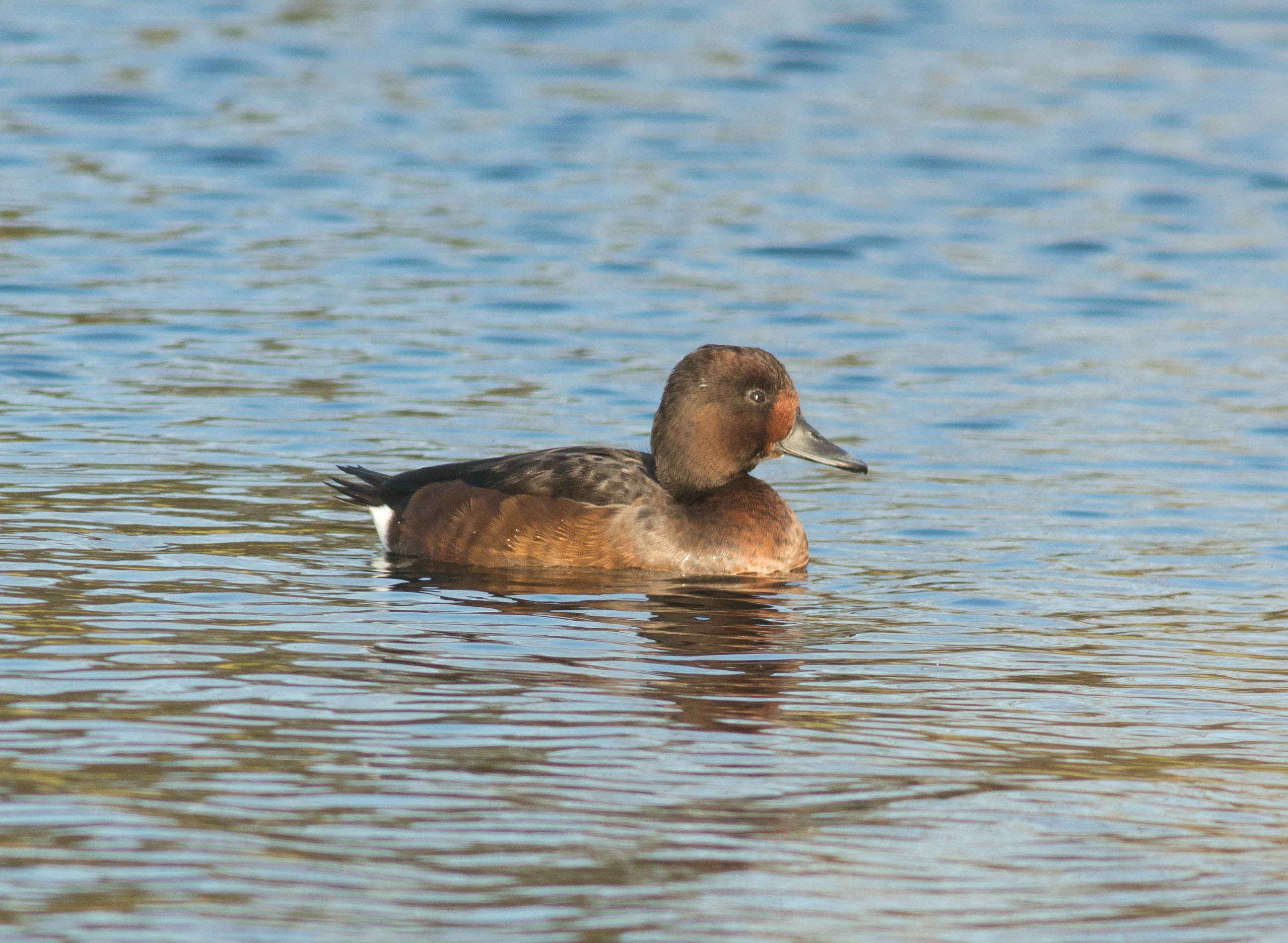 The drake American Wigeon was still at Tain, Highland, on 6th, with a male at Loch Gruinart, Islay, on 7th. Just five Green-winged Teal were reported, among them what is presumably a returning drake at Saltholme and latterly Dorman's Pool, Cleveland, on 5th. Others were in the Outer Hebrides, Clyde, Dumfries & Galloway and Lancashire.

The white-morph Snow Goose was again in the Cardurnock and Anthorn area of Cumbria on 4th and 8th. The adult Ross's Goose returned (?) to Southport, Lancs, on 3rd; this is now the third winter it's been seen in this area. The Ridgway's Cackling Goose was still in Dumfries & Galloway but rare geese were otherwise just that, though five Black Brants were reported nationwide.

There was very little else to report on the waterbird front, with six Glossy Ibis spread widely across Britain and Ireland included a bird at Lough Gullion, Co Armagh, from 4th. A Cattle Egret was at Aylmerton, Norfolk, on 4th and is presumably the bird reported recently at nearby Sharrington; two were again at Teigngrace, Devon, on 8th. Great White Egrets were reported from around 30 sites.

After the recently deceased individual in Caithness, it was great to see another white-morph Gyrfalcon seemingly doing just fine at Ardivachar Point, S Uist, on 6th; a few fortunate observers were treated to crippling views of what is surely one of the finest winter vagrants to occur on our shores. 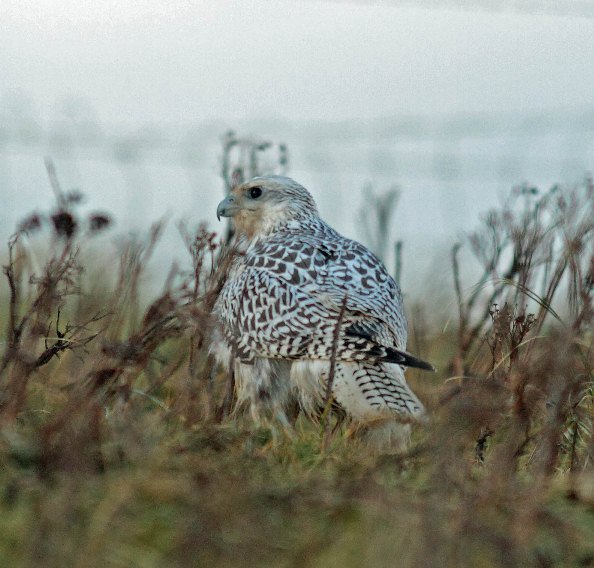 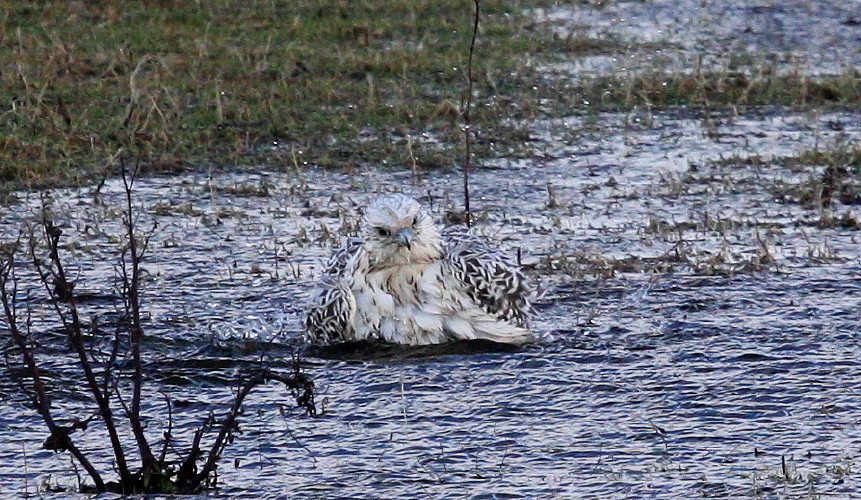 It looks increasingly inevitable that the juvenile Pallid Harrier, seemingly very content hunting the saltmarsh at Snettisham, Norfolk, will spend the winter around The Wash. The presumed juvenile Northern Harrier again flew past East Coast NR, Co Wicklow, on 5th and 7th, and another was reported from Wexford Wildfowl Reserve on 6th. A Rough-legged Buzzard was seen flying east over Staines Moor, Surrey, on 3rd, with the confiding bird still at Holland Haven, Essex. In Norfolk one was at Heacham on 7th and up to three were in the Choseley area on 3rd, these presumably also accounting for sightings from the likes of Thornham and Brancaster Staithe.

The Long-billed Dowitcher at Pennington Marshes, Hants, was again reported intermittently throughout the week, while the Northumberland bird also stayed put at Cresswell Pond. The juvenile Spotted Sandpiper continued to perform to within inches at Pilmore, Co Cork, while the pair of Grey Phalaropes inland at Farmoor Reservoir, Oxon, also entertained throughout the week; up to two frequented Stevenston Point, Ayrshire. 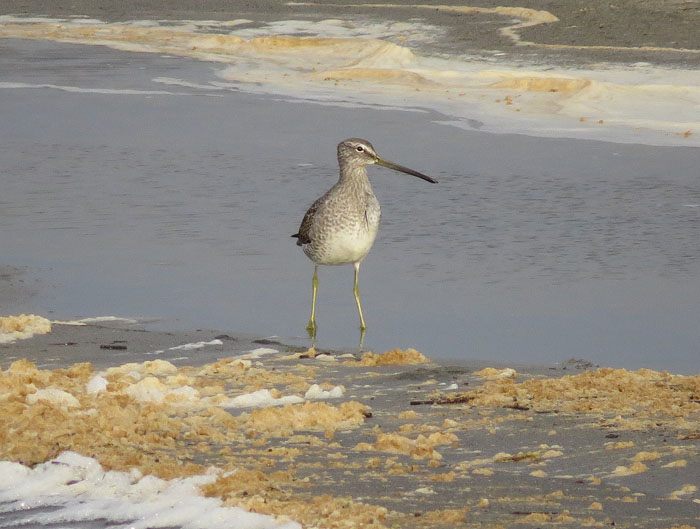 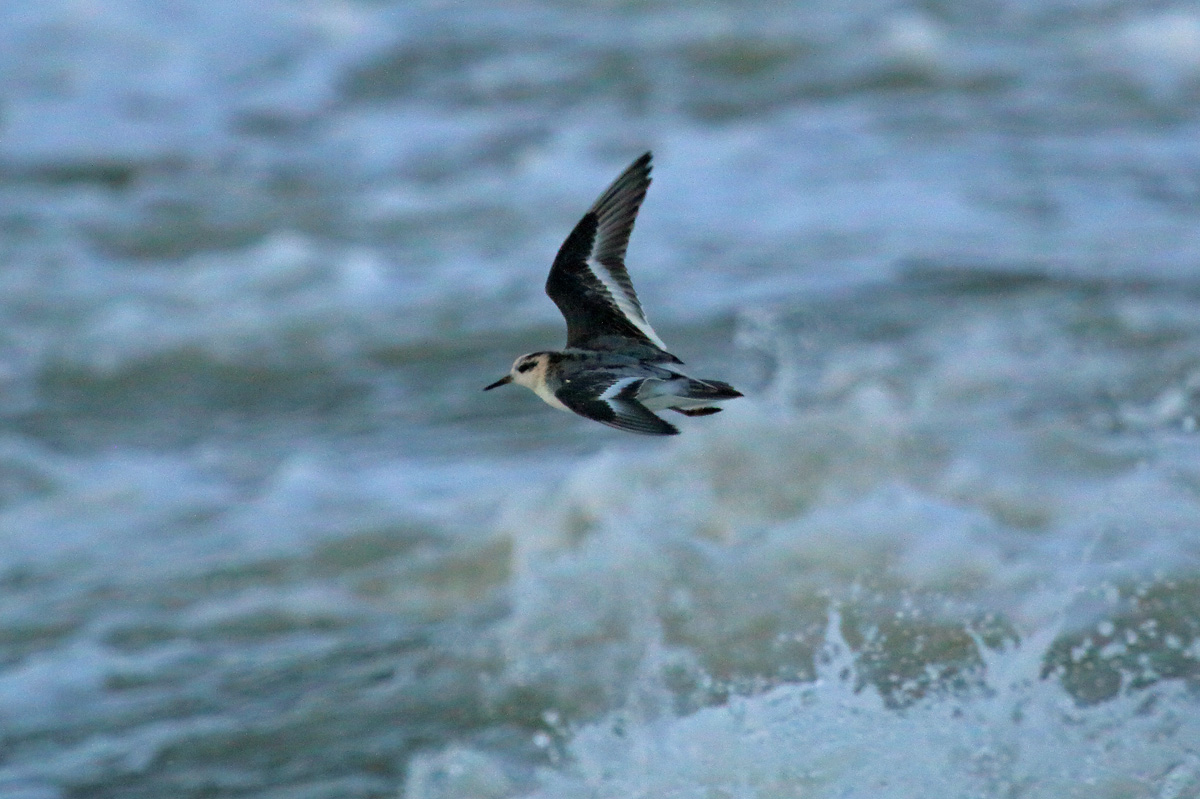 With no sign of the Tralee Gull-billed it was down to the long-staying Forster's Tern in Galway to represent its family; this week it was at Flaggy Shore, Co Clare, on 6th. Rare gulls were at a premium, with just the American Herring Gull at St Just, Cornwall, of note — even Ring-billed Gulls were scarce, the sole British record concerning the first-winter again at Sancreed, Cornwall, from 5th. Five were reported in Ireland: two at Tralee, Co Kerry, and adults in Co Cork (2) and Co Dublin. Iceland Gull numbers continued to slowly increase, with at least 35 reported nationwide. Glaucous Gulls were also slightly up but remain thin on the ground — perhaps 15 or so were noted.

The Hoopoe lasted another week near Hinksford, Staffs, while another present at Southolt, Suffolk, on 5th had apparently already been present several days — could it have been the bird seen in Norfolk in November? 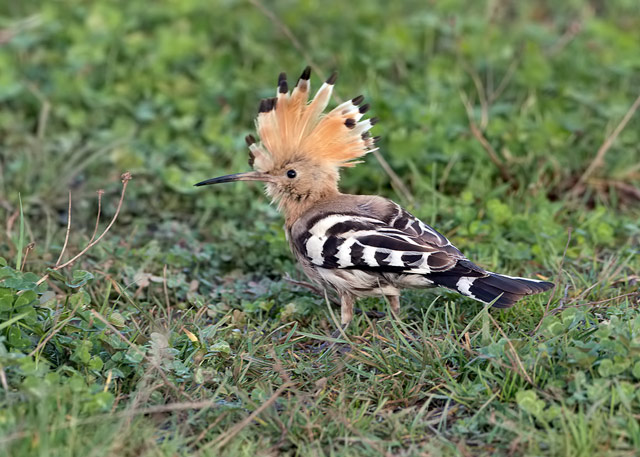 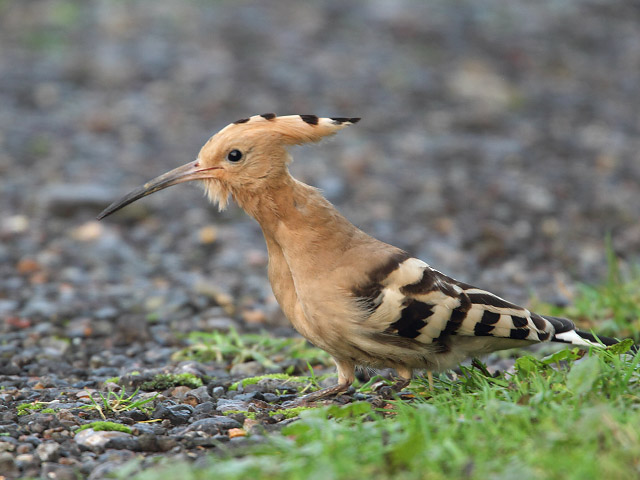 A swift species in the Margate area, Kent, from 6th was initially identified as a Pallid Swift but is now thought to be Common on the basis of some excellent images obtained on site. Either of these species is more-or-less unheard of at this time of year, and its occurrence is no doubt attributable to the extraordinarily mild conditions we continue to experience. The bird was still present on 8th and another Common/Pallid Swift was seen briefly at Church Norton, W Sussex, on 4th. 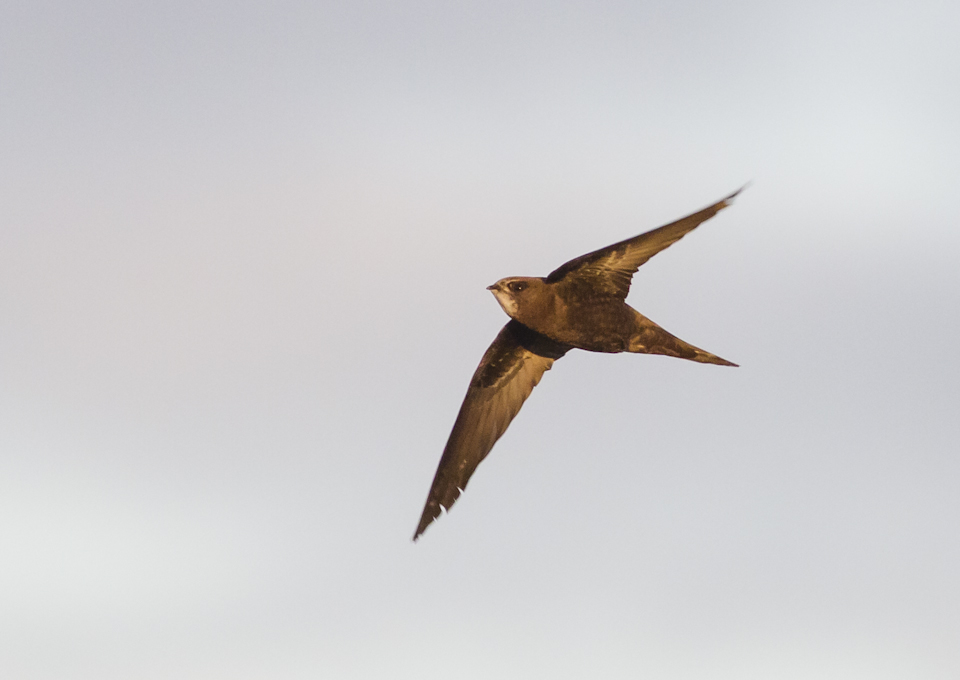 A Richard's Pipit was at Flamborough Head, E Yorks, on 2nd and another at Shell Ness, Kent, on 4th. Three Shore Larks remained on the beach at Holme, Norfolk, with another trio at Hartlepool, Cleveland, from 6th. A Sand Martin was at Attenborough NR, Notts, on 7th and Barn Swallows were reported from at least ten sites. 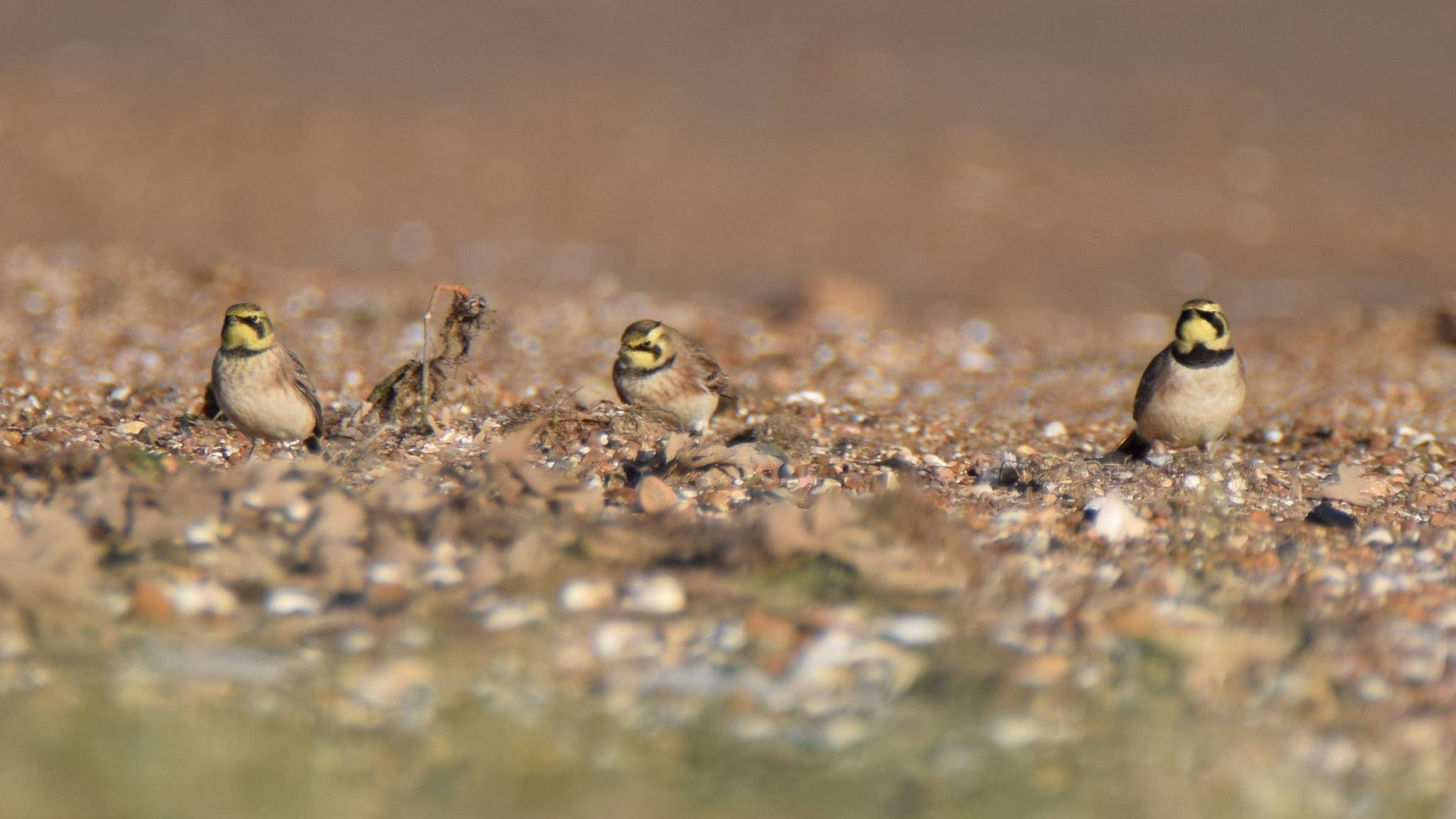 Waxwings were reported from a similar number of sites as last week. Fifteen were as far south as Ramsgate, Kent, on 5th, while birds had penetrated as far inland as West Yorkshire and Nottinghamshire, the latter including an impressive flock of 20 flying west over Hoveringham on 7th — this in itself the biggest flock of the week, along with the 20 or so in Heaton, Northumberland, on 2nd.

The Barred Warbler spent the week near Thorntonloch, Lothian, and seems well settled. A Dusky Warbler was reported with Chiffchaffs at Ham Wall, Somerset, on 6th, while Yellow-browed Warblers were in Cornwall (Newlyn and Mullion) and Devon (Broadsands and Dawlish Warren). 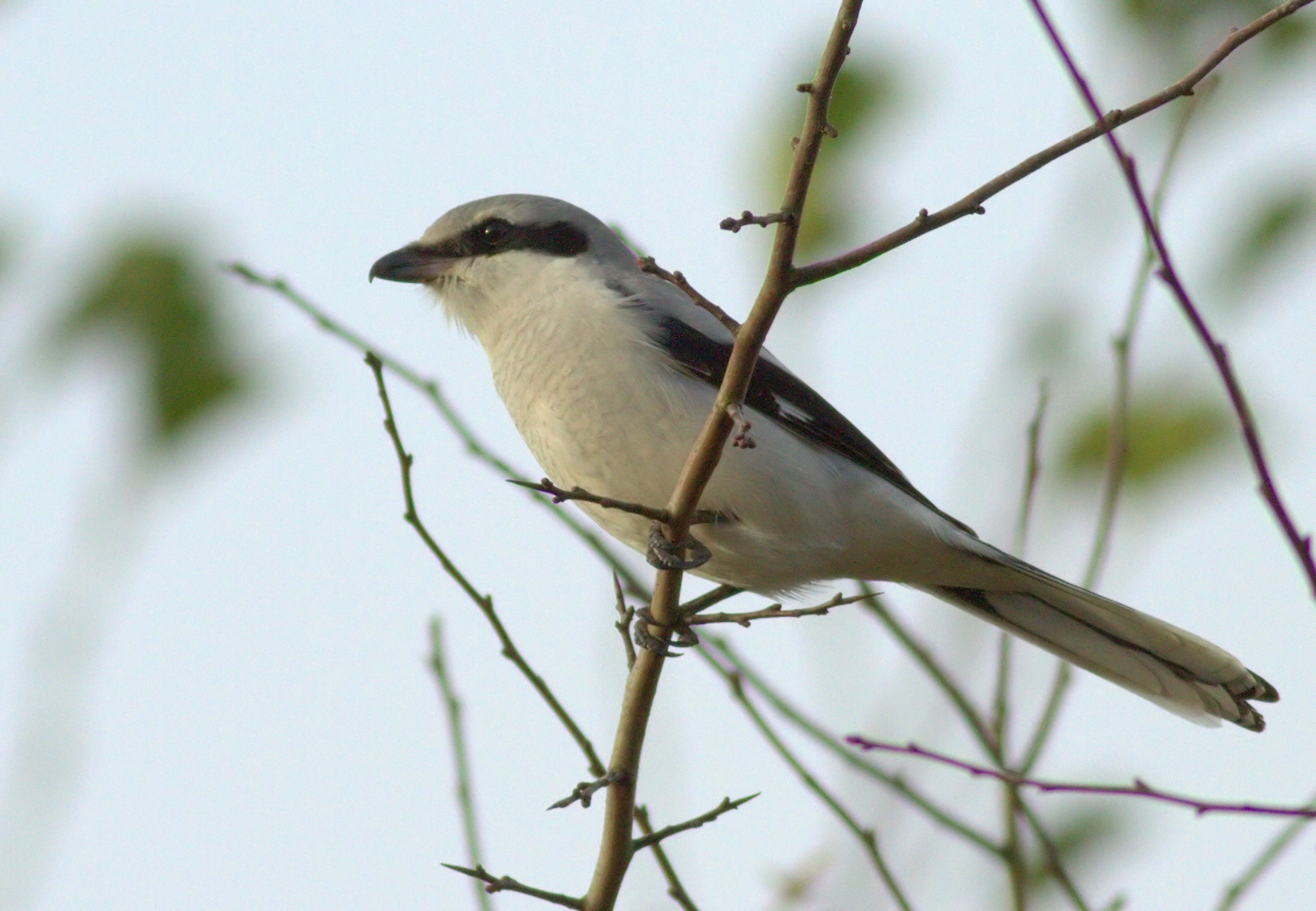 A stunning male Eversmann's Redstart at Al Khiran, Kuwait, was the first recorded in the country since one at Al Abraq in November 2013. The Black Drongo also remains at Salmi, although its rather tatty plumage state is perhaps cause for concern. 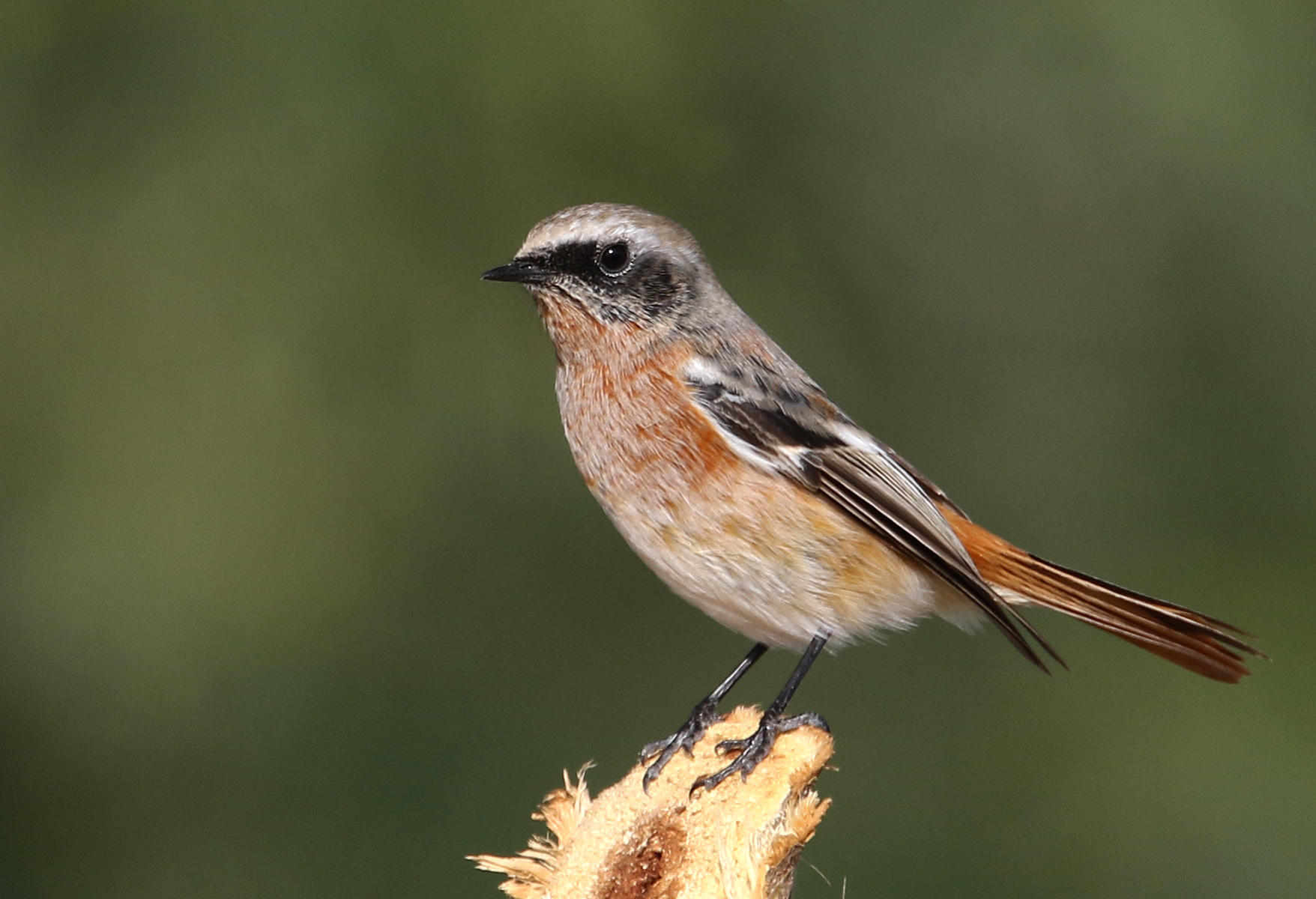 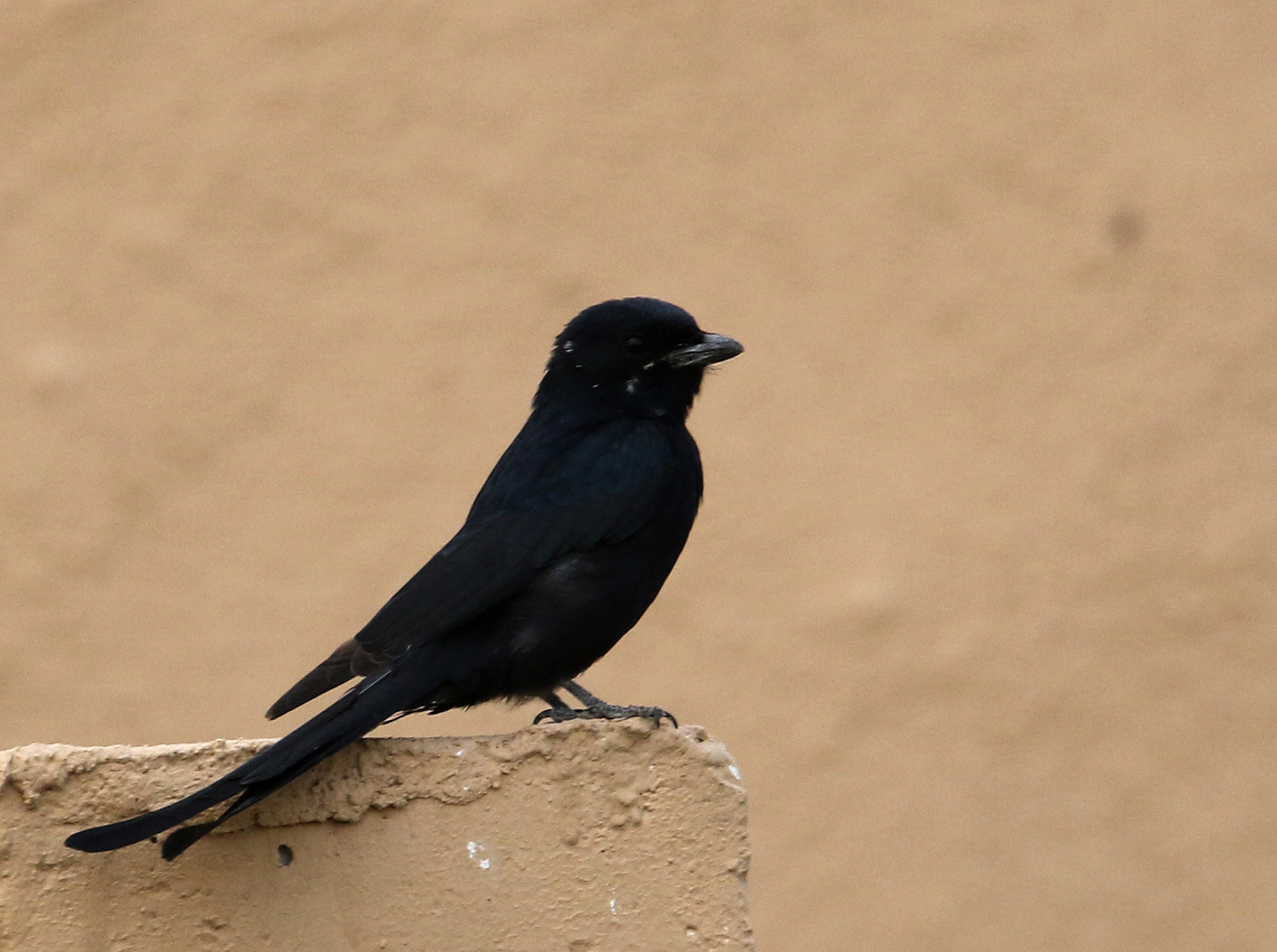 It was good to hear that the Italian Grey-headed Gull had once again returned to the Puglia coastline, with news received that it was back at Bisceglie on 3rd. The Amur Wagtail was still present at Lahti, Finland, early in the week, while the male Pine Bunting showed on and off near Broekhuizen, Netherlands, throughout; it was joined by a presumed hybrid female Pine Bunting × Yellowhammer from 6th.