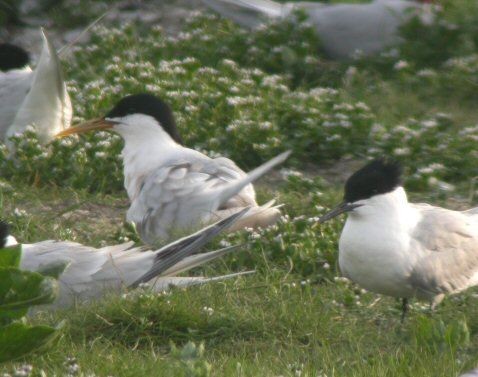 With spring passage all but over, pulses were set racing by the appearance of yet another controversial orange/yellow-billed tern that appeared at Cemlyn (Anglesey) on 3rd and remained throughout the week. Although showing several features of Cayenne Tern (a race of Sandwich Tern found in South America and the Caribbean, treated by some authorities as a full species), it also displayed several apparent inconsistencies and created much debate, with many observers suggesting the hybrid option. With Cayenne Terns in their home range showing a bewildering range of bare-part colours, patterns and even shapes, it seems unlikely that its identity will ever be proven beyond doubt.

A trickle of late waders kept interest up, with a Pacific Golden Plover briefly at Hickling Broad on 6th and a Lesser Yellowlegs at Freiston Shore RSPB on 7th. A fine summer-plumaged Spotted Sandpiper was at Minsmere RSPB on 1st-2nd while the pair of Black-winged Stilts remained at Martin Mere (Lancs). A fly-over Black-winged Stilt at St. Monans (Fife) on 3rd was far less obliging. There was a Pectoral Sandpiper on Inchkea North off The Mullet (Mayo) on 1st with a probable briefly at Buckenham Marshes RSPB on 3rd. A total of 7 Temminck's Stints were reported, including 2 together at Over Fen (Cams) on 4th. A female Red-necked Phalarope was at Hickling Broad (Norfolk) to mid-afternoon on 1st with probably the same bird relocated at Cley NWT (Norfolk) from late afternoon the same day. On the Channel Islands there was a Kentish Plover at Grouville Bay (Jersey) on 7th.

After the previous couple of weeks' excitement, seawatching reports were few, with just a handful of Long-tailed Skuas reported with no more than 2 from any site, 2 Pomarine Skuas past Jenny Brown's Point (Lancs) on 1st and up to 3 Balearic Shearwaters past Portland (Dorset).

Rare terns included a belated report of a probable Gull-billed Tern following a plough near Lamorna Cove (Cornwall) on 31st May. There were 2 Whiskered Terns briefly at Blennerville (Kerry) on 1st and another at Loch of Skene (Aberdeenshire) on 5th and a White-winged Black Tern at Belfast Lough RSPB (Antrim) on 6th. The 1st-summer Bonaparte's Gull remained at Blennerville (Kerry) to at least 5th and adult Laughing Gulls were at Stornoway (Outer Hebrides) on 3rd and near Clachan, N. Uist (Outer Hebrides) on 6th. There was a 3rd-summer Kumlien's Gull at North Ford Salmon Factory, Benbecula (Outer Hebrides) on 7th with single Iceland Gulls still at St. Mary's (Scilly), Mallaig (Highland), Whitehouse Lagoon (Antrim) and Bunbeg (Donegal). There were just 4 Glaucous Gulls reported from the north and west during the week and just one 1st-winter Caspian Gull at Blackborough End Tip (Norfolk) on 5th.

The Iberian Chiffchaff was still holding territory near Postbridge (Devon) on the 3rd and the Savi's Warbler remained at Skaw, Unst (Shetland) to at least 3rd. A male Subalpine Warbler trapped and ringed at Spurn (E. Yorks) on 2nd was relocated further north on the Farne Islands (Northumbs) on 3rd and 4th. A possible Marsh Warbler was at Tide Mills (E.Sussex) on 2nd and Icterine Warblers were at Whitburn CP (Durham) on 3rd and Isles of Scilly on 4th. A male Black-headed Bunting on Bardsey (Gwynedd) from 2-4th was typical in both location and date. A female Citrine Wagtail was a good find at Tacumshin (Wexford) on 1st-2nd and the Red-throated Pipit was still on Foula (Shetland) on 1st. A Tawny Pipit was at Cogden Beach (Dorset) on 4th and a Grey-headed Wagtail on Bryher (Scilly) on 7th. There were 2 Red-breasted Flycatchers in Wales this week, a male on Bardsey (Gwynedd) on 1st and a female at Porth Meudwy (Gwynedd) on 3rd. At least 13 Red-backed Shrikes were reported, including up to 3 in the Spurn (E. Yorks) area and an inland bird at Altcar Withens (Lancs) on 5th. In contrast there was just one Woodchat Shrike this week, at Metton (Norfolk) on 4th. A splash of colour was provided by up to 13 Bee-eaters, including 6 in Norfolk on 2nd and 3 at Reston (Borders) on 7th. There were Hoopoes at Dersingham (Norfolk) and Bardsey (Gwynedd) on 2nd and St. Martin's (Scilly) on 3rd with another seen from a pelagic 3 miles southwest of Bishop Rock (Scilly) on 2nd. Other typical late spring migrants were 7 Golden Orioles, 4 Serins and 5 Common Rosefinches. Red-rumped Swallows were at Dungeness RSPB (Kent) on 1st and Ferrybridge (Dorset) on 3rd and a Short-toed Lark was singing at Tacumshin (Wexford) on 5th.

The 1st-summer Night Heron was still at Tacumshin (Wexford) to at least the 5th and up to 5 Purple Herons included the long-staying individual at College Reservoir (Cornwall) throughout. Typical fly-over Black Storks, or possibly the same bird, were at Margate (Kent) and Gazeley (Suffolk), both on 6th. White Storks of unknown origin were seen in Durham, Yorkshire, Lincolnshire, Cambridgeshire and Hertfordshire.

Drake King Eiders remained at Irvine (Ayrshire), Dales Voe (Shetland) and the Ythan Estuary (Aberdeenshire) with possibly the same bird at Blackdog (Aberdeenshire) on 3rd. The American Wigeon was reported again at Cardiff Bay (Glamorgan) on 7th and the Green-winged Teal was still at Meikle Loch (Aberdeenshire) on 1st. Drake Ring-necked Ducks were at Loch Gelly (Fife) and Avonmouth (Somerset) and the drake Surf Scoter remained off Lothian with another at Blackdog (Aberdeenshire) on 5th-6th. A possible grey-morph Gyr Falcon was reported from Vallay Strand, N. Uist (Outer Hebrides) on 4th and a total of 5 Black Kites were reported between Cornwall and Suffolk. Single male Red-footed Falcons were at Holt Heath (Dorset) and Farlington Marshes HWT, both on 4th.