In a week which saw the return of a wintry chill late on, with a dusting of snow even as far south as Norfolk, the news we were putting out retained a spring flavour as an increasing variety of overshoots made it across the Channel, albeit in small numbers. However, the one new major rarity to be discovered came from an altogether different palette: the Isle of Noss, Shetland, turned up a Hermit Thrush on 19th. Assuming official acceptance, Noss claims the latest in an incredible run of six records of this highly prized Nearctic passerine in the last eight years, the rest of the 11 previous records all being before the Millennium. Unfortunately, a search the following day was fruitless and it appeared that the thrush had moved on. 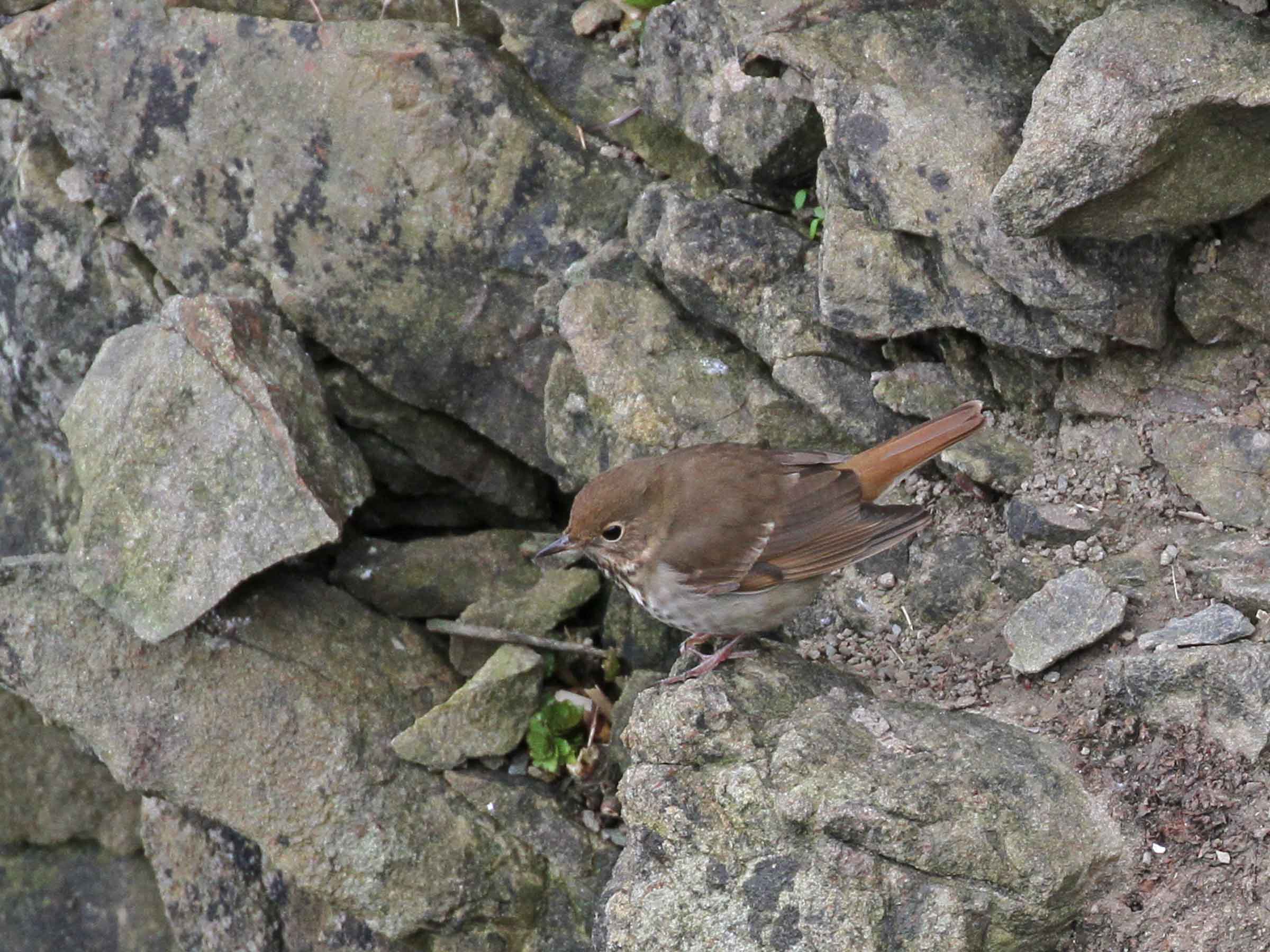 There were two colourful additions to this spring's overshoot roll call this week: European Bee-eater and Eurasian Golden Oriole. The three reports of the former were split between the classic venue of the Isles of Scilly, where a singleton flew over St Martin's on 20th, and the somewhat less predictable setting of Wembley, Greater London, through which a duo flew west on 21st. After the first of the orioles arrived on Great Saltee, Co Wexford, on 21st, Scilly broke through again with singles on St Martin's on 23rd and St Mary's on 24th. Staying with all things bright and beautiful, a male White-spotted Bluethroat was seen at Woods Mills NR, West Sussex, on 19th, but news only emerged the next day, when it had already gone. A female Bluethroat was also reported in Sussex this week, showing at Cuckmere Haven on 25th.

Red-rumped Swallows continued to crop up at typical spots over the review period, with Scilly turning up birds over Tresco's Great Pool and Porth Hellick Down on St Mary's on 21st and 23rd respectively, as well as another sighting at Lodmoor, Dorset, on 22nd and one in the Nanjizal Valley, Cornwall, on 23rd. Finally, a lone bird flew south through Spurn, East Yorks, on 24th. Subalpine warblers were still on the line-up in the south and west, with birds on offer at Portland, Dorset, from 22–23rd, Skomer, Pembrokeshire, on 20th and at Land's End, Cornwall, on 23rd. A European Serin at Dungeness, Kent, was typically fleeting on 20th but a songful male remained at Portland from 21–24th, perhaps accounting for a brief sighting by The Fleet at Weymouth on 24th.

Tawny Pipit was another new entry this week, one being seen at Farlington Marshes, Hants, on 22nd, while a Short-toed Lark on St Mary's from 23–25th was also the first to be reported in Britain this year. Scilly produced a Richard's Pipit, too, appearing on Bryher on 23rd, the same day as others were found at Hartland Point, Dorset, and, notably, Lollingdon Hill, Oxon. A Red-breasted Flycatcher at Skinningrove, Cleveland, came as quite a surprise on 25th.

An Ortolan Bunting along the cliffs at Corton, Suffolk, was an enviable spring find on 24th, while Goss Moor, Cornwall, continued to cater for the two Little Buntings to the same day. In Somerset, Haddon Hill's smart male Two-barred Crossbill remained a popular diversion to 24th. The Woodchat Shrike stuck around Lizard village, Cornwall, to 21st, while lingering Great Grey Shrikes were registered in Hampshire, Dorset, North Yorkshire and Powys and a bird at Great Bartford made for a nice Bedfordshire record on 23rd. 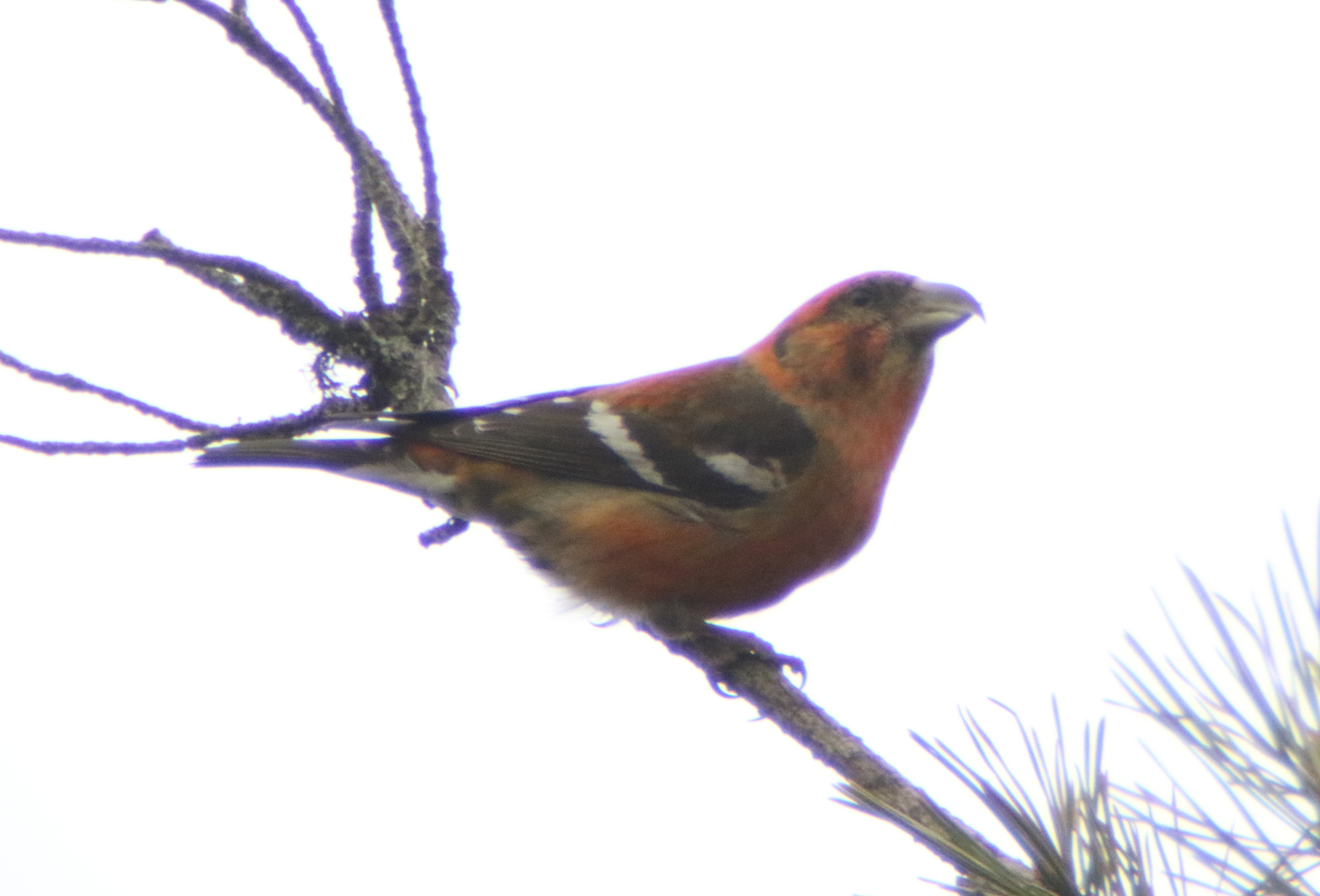 Both of East Anglia's Savi's Warblers reeled away in their chosen reedbeds throughout the week, adding an extra level to the soundscapes of Minsmere, Suffolk, and Hickling Broad, Norfolk. An Alpine Swift found Five Mile Point, Co Wicklow, to its liking from 21–22nd and could plausibly be one and the same as that seen over Tacumshin, Co Wexford, on 23rd. Spring Wrynecks don't tend to mess about and seldom stick for very long, this being clearly demonstrated by the five that turned up over the week, shared between Cornwall, Greater London, Kent, South Yorkshire and Suffolk, each one refusing to stay a night. A tally of 10 Hoopoes was pretty good going, with birds found in Devon, Derbyshire, Co Durham (two), the Isles of Scilly, Gloucestershire, Norfolk, South Yorkshire, West Sussex and Co Wicklow. 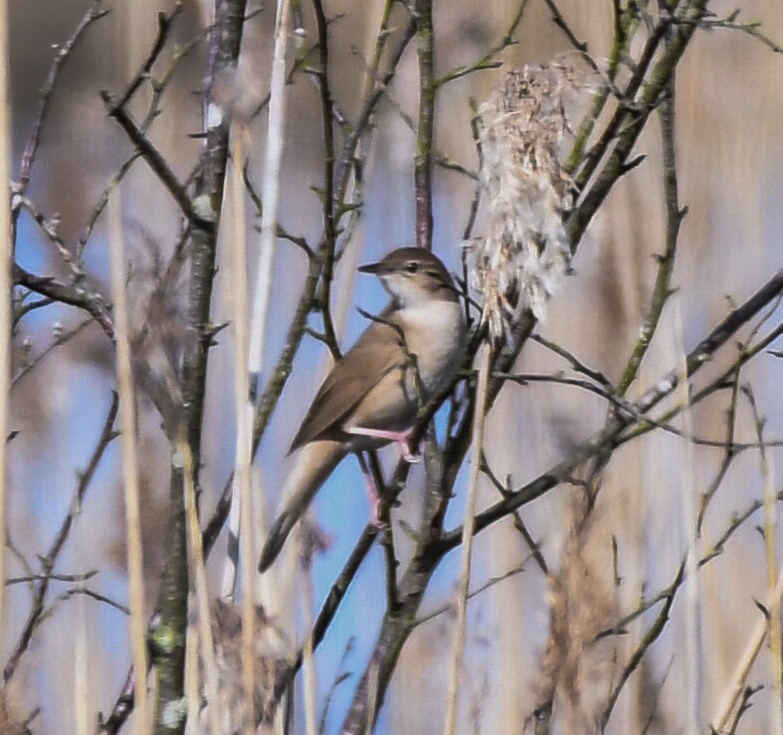 Highland's resident drake American Black Duck at Strontian was seen to 24th, while the region's drake King Eider was relocated off Whiteness Head on 22nd. Another King Eider flew past Lossiemouth, Moray/Nairn, on 19th and the drake Lesser Scaup was still at the Loch of Boardhouse, Orkney, on 24th, while the Bodmin Moor drake relocated to Siblyback Reservoir on 21st, staying there to 23rd. Other scarce wildfowl included the two adult Black Brants at Spurn and another at Tetney Marshes, Lincs, an American Wigeon still at Udale Bay, Highland, on 24th, the Ring-necked Duck still at Dungeness, Kent, to 25th and others at Blanket Nook, Co Donegal, and Quoile Pondage, Co Down, on 23rd, as well as nine Green-winged Teal across Britain and Ireland. In Lothian, both the adult drake and the female Surf Scoter were seen bobbing off Musselburgh again during the week. 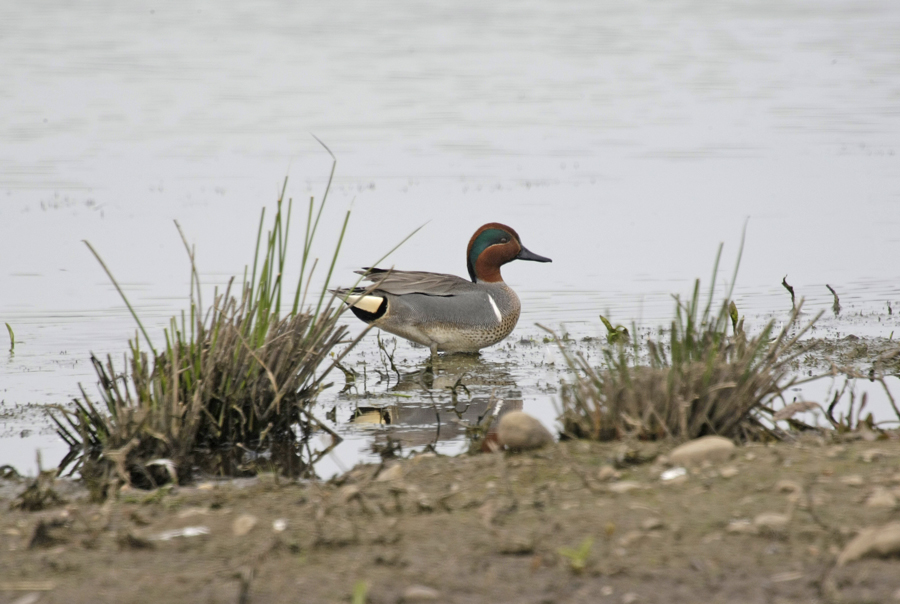 Initially identified as a Common Crane, a rather early Black Stork was photographed as it sailed over Sruwaddacon Bay, Co Mayo, on 22nd. This is just the third Irish record so eyes will no doubt remain peeled for this wanderer for a little while yet. Potentially pukka White Storks were seen over Pinner and Ruislip, Greater London, on 19th; Penzance, Cornwall, on 21st; Coventry Airport, Warks, on 22nd; Houghton Cut, Co Durham, on 23rd; and Gibraltar Point, Lincs, on 24th. Of interest, the wanderlust of the famous rehabilitation absconder Z1213 took it to Loch of Strathbeg, Aberdeenshire, this week. The only Spotted Crake report was of a bird seen in a ditch near Fulking, West Sussex, on 23rd.

Co Kerry's first-summer Squacco Heron remained in the flooded dunes at Ventry, Co Kerry, to 23rd and Scilly came up with a new, female Little Bittern which performed superbly at Lower Moors, St Mary's, from 22–25th. As for Night Herons, the Lundy, Devon, bird resurfaced on 21st and the Shropshire individual was relocated at The Quarry in Shrewsbury, from 22–25th. An adult turned up in a garden in Adare, Co Limerick, on 24th and two on Barra made for a smashing find on the Outer Hebrides on 25th. Purple Herons included an elusive bird at Crousa Downs, Cornwall, seen on 19th and 23rd and another at Medmerry, West Sussex, on 20th, where two were seen arriving off the sea on 22nd. The Isles of Scilly had one over St Agnes and St Mary's on 21st, another materialised at Lodmoor, Dorset, on 22nd and 24th, while the Ouse Washes, Cambs, attracted another on 23rd. 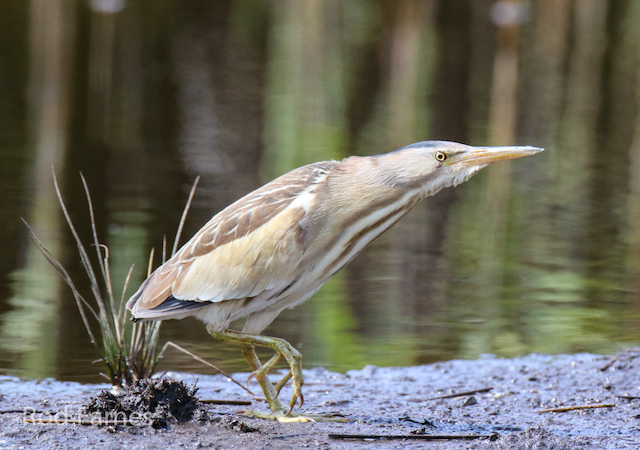 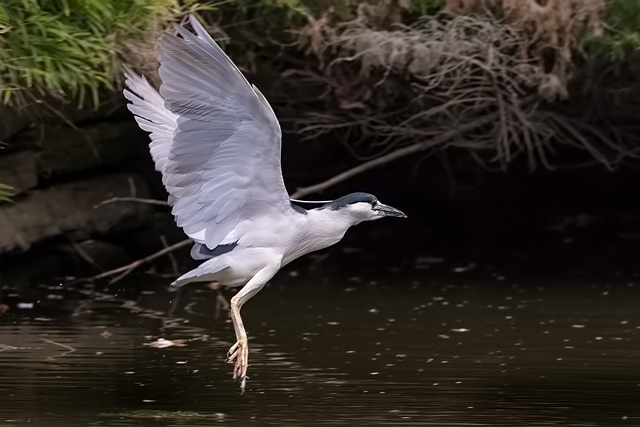 Pallid Harrier is of course now a relatively regular sight in Britain but adult males retain their gold-dust status, as well as their utterly stonking looks, so the fortunate birder who tracked one heading north over Grimston, East Yorks, on 23rd must have needed a few moments for the heart to get back in rhythm! The Lizard hosted the first Red-footed Falcon of the year, a female, from 22–23rd but it proved too slippery for crowds to start forming, while the classic Red-foot site of Grove Ferry, Kent, came up with a close second, another female, on 25th. A Black Kite drifted over West Ham, Greater London, on 20th and another lingered for a short while over Midleton, Co Cork, on 23rd. Norfolk also produced a Black Kite, over Stradsett on 24th, but it had already been overshadowed by a White-tailed Eagle blocking out the sun at various sites in Suffolk then Norfolk from 20–23rd.

An American Golden Plover at Termoncarragh Lough, Co Mayo, on 20th was perhaps the best new wader of the week, at least in a spring context, but nowadays Kentish Plovers tend to cause more of a stir so a three-day male at Rodden Hive, Dorset, from 22nd went down a treat, even if it kept its distance. Pennington Marshes, Hants, also attracted a male from 20–21st. There were still plenty of Black-winged Stilts on offer, the influx affording valuable county appearances in Buckinghamshire and Northamptonshire, at Little Marlow GP on 20th and at Stanford Reservoir from 20–23rd respectively, while two on Tresco, Scilly, were a good archipelago record from 24–25th. The stilts at Slimbridge, Glos, received the most attention, numbering five on 19th but only two hanging on to 24th. 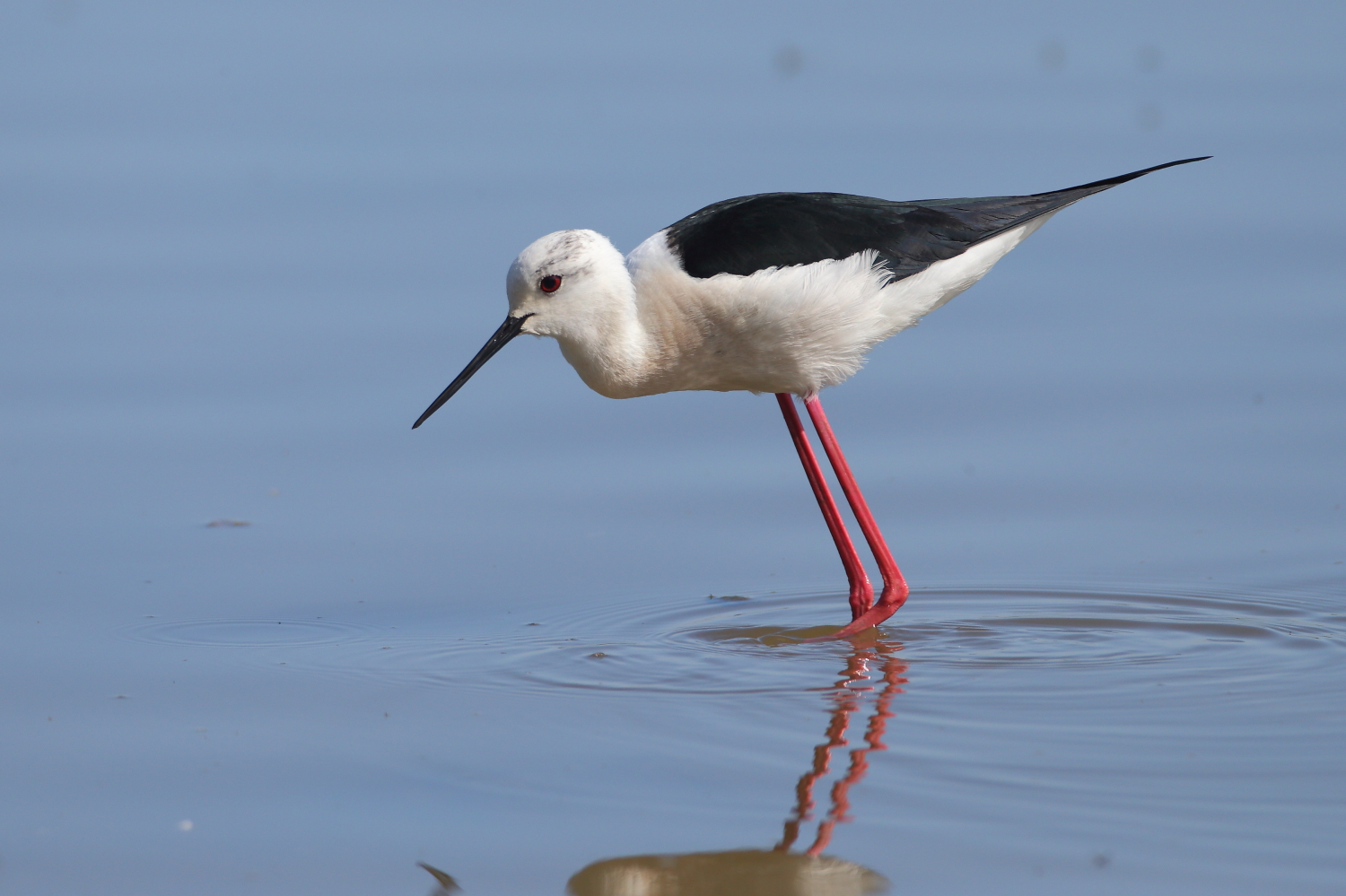 A Long-billed Dowitcher in summer nick arrived fresh-in on Papa Westray, Orkney, on 19th and stayed put to 25th, as did the similarly spruce long-stayer at Tacumshin, Co Wexford. A Lesser Yellowlegs was drawn to the margins of Burrowes Pit at Dungeness, Kent, on 22–23rd. On 21st, the American Royal Tern showed up on Guernsey for the first time in two weeks and, up in Argyll, Loch Feorlin continued to host the Pied-billed Grebe to 24th. 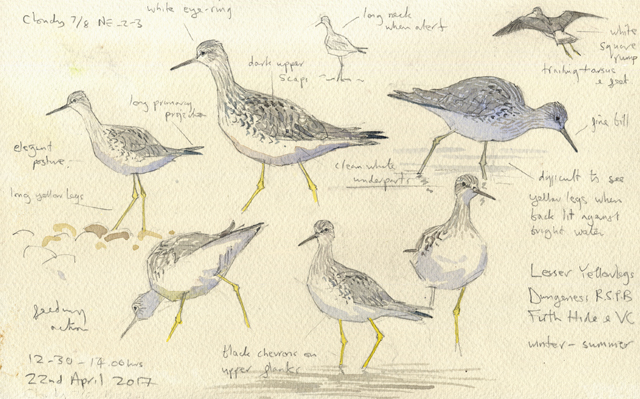 With the identification of two new individuals, the number of Bonaparte's Gulls in the country this week climbed to the grand figure of four. The new birds involved were an adult around Loch of Strathbeg, Aberdeenshire, on 23rd, and another first-summer picked out at Abberton Reservoir, Essex, the previous day and hanging around to 25th. The existing two first-summers remained at Farmoor Reservoir, Oxon, and Blashford Lakes, Hants, to the week's end. Ring-billed Gulls included two at Belfast Lough, Co Antrim, from 24–25th; one at Gormanstown, Co Mayo, on 21st; two at Tralee, Co Kerry, on 23rd and two at Enniskillen, Co Fermanagh during the week. 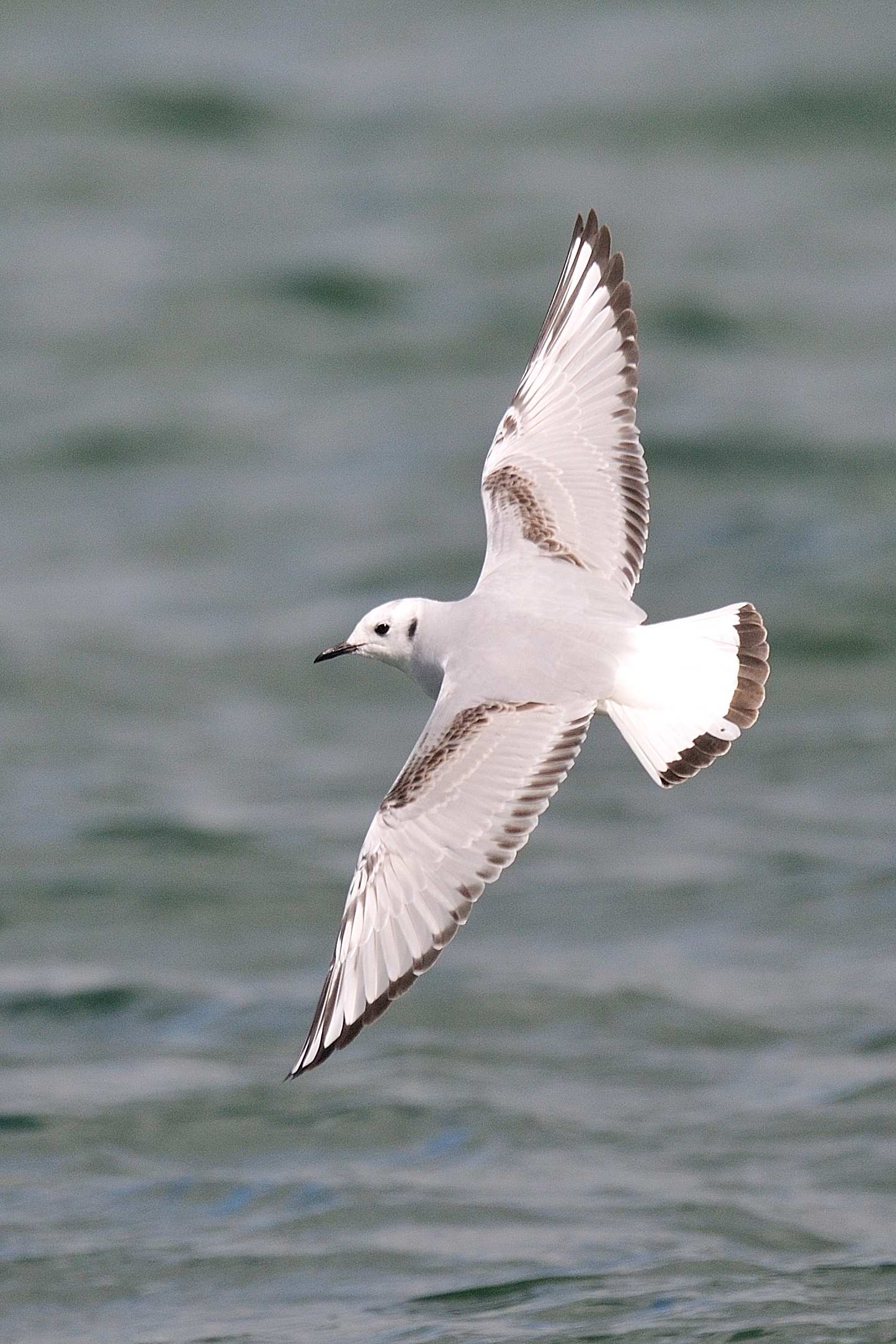 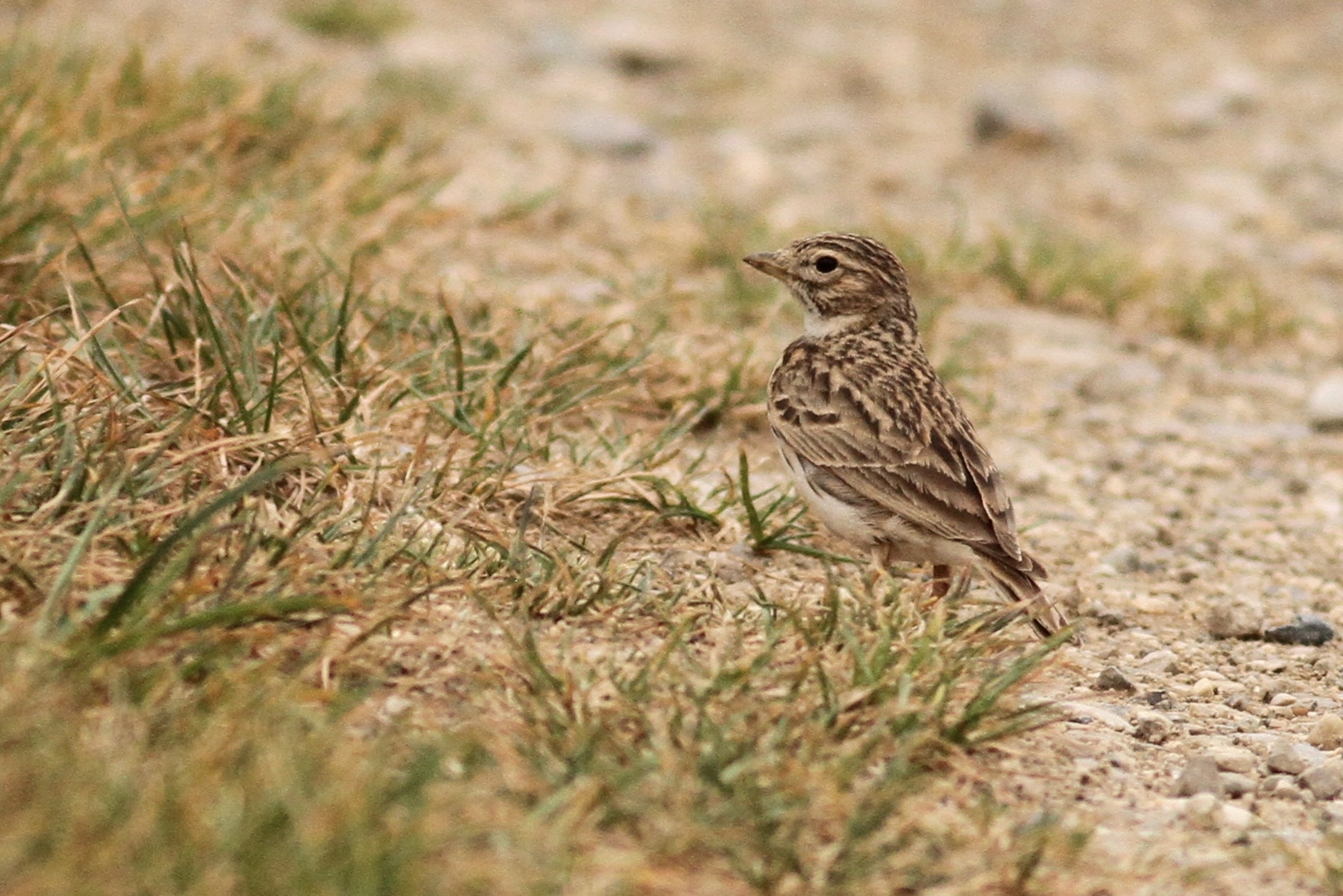 Other reports of interest included the roaming Black-browed Albatross alternating between Heligoland and Sylt, Germany, and also flying past Rømø, Denmark, on 22nd. A White-headed Duck was at Kwarikweg, Belgium, on 19–21st and a Desert Finch was found at Cape Greco, Cyprus, on 20th. In Israel, the immature Bateleur was seen again near Kiryat Gat on 19th. Also on 19th, two Elegant Terns were at Sagunto, Spain, and both a Yellow-billed Stork and a Lappet-faced Vulture were at Ras Ghareb, Egypt. Back in Cyprus, a Hooded Wheatear and the Bar-tailed Lark were at Larnaca on 25th. 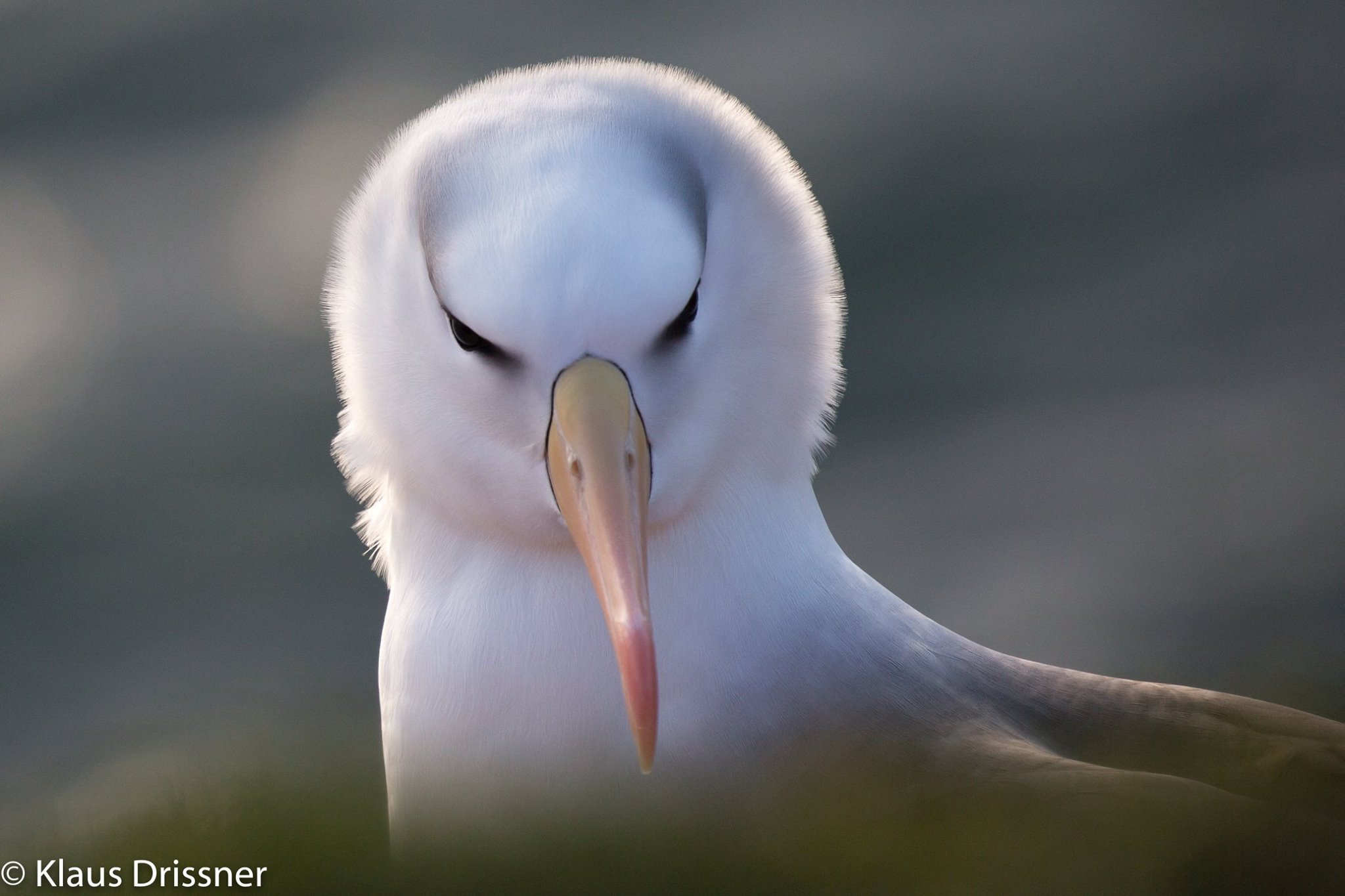