Birding well and truly hit the traditional late-June doldrums this week. Last week's Royal Tern, last seen at Black Rock Sands on Monday 15th, reappeared further round the Welsh coast at Llandudno on Saturday 20th. It led visiting birders a merry dance over the weekend, until the last reported sighting to date on Monday 22nd. Its whereabouts since are unknown, but one wouldn't bet against it turning up again somewhere before the summer is out. An Eastern Olivaceous Warbler was on Fair Isle on Sunday 21st, but could not be relocated the following day. A series of plausible, but sporadic and mostly tentative, sightings suggests that a Black-browed Albatross may be summering off the coast of Galloway, and another sighting of this elusive ocean wanderer was reported from the Mull of Galloway on Tuesday 23rd. A Stilt Sandpiper was in the Blackstone/Seafield area of Co. Wexford on 23rd and 24th at least. Guernsey held on to its long-staying Zitting Cisticolas, still at Port Soif. 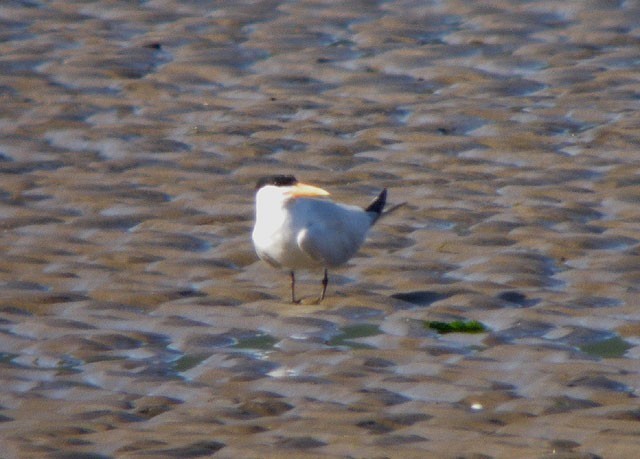 Seawatchers had a similarly thin time of it this week. A Great Shearwater passed Carnsore Point (Wexford), single Sooty Shearwaters were reported off the coasts of Mayo, Sligo and Cornwall, and Balearic Shearwaters were noted in their traditional southwestern haunts off Cornwall, Dorset and Jersey. Single Pomarine Skuas were noted in Suffolk, Argyll, the Outer Hebrides and Lancashire, while the only Long-tailed Skua report was of a single past the Mull of Galloway on Saturday 20th. Storm-Petrels were reported in reasonable numbers on either side of the Irish Sea, with some impressive numbers trapped and ringed in the southwest of England: 300 at Porthgwarra (Cornwall) on the night of Saturday 20th, and 26 at Hartland Point (Devon) on Monday 22nd.

A Cattle Egret was reported from Dungeness on Friday 19th but not subsequently, and three were on the Tourig Estuary in Co. Waterford the following day. News of breeding birds may rightly be being kept under wraps, but it seems the mass colonisation of these islands by this species may take a while yet. New Great White Egret reports came in from Norfolk, Essex and Leicestershire but only the itinerant Suffolk bird (showing up this week at Benacre Broad and Hen Reedbed reserve near Blythburgh) remained from last week. The Scilly Night Heron flew over Telegraph (St. Mary's) in the evening of Monday 22nd (the first report of this bird for 10 days) but has not been reported since. The Purple Heron at Ham Wall/Walton Heath in Somerset was last reported on Sunday 20th but the male Little Bittern in the same area was still calling away fruitlessly on Loxton Marsh on Tuesday 23rd at least. With Great Bitterns photographed in the same neck of the woods in the last couple of weeks too, this is clearly the place to go for uncommon herons at the moment. A handful of Common Cranes were seen away from the usual Broadland stronghold, with mainly fleeting sightings reported from Suffolk, Leicestershire, Staffordshire, Dumfries & Galloway and Aberdeenshire. A Spotted Crake was singing away on 22nd and 23rd near the tiny youth hostel at Howmore on South Uist, and a Corncrake was heard near Hollywood (Co. Down) on the night of Thursday 18th.

The Black Duck continued its stay at Colliford Lake (Cornwall) to Friday 19th but has not been reported to us since. The drake Lesser Scaup was still on Loch of Benston (Shetland) to Wednesday 24th at least, and an American Wigeon was briefly at Graemshall Loch (Orkney) on the evening of Sunday 21st. The adult drake Ferruginous Duck remained on Chew Valley Lake (Somerset) to 24th at least. No notable sea-ducks were reported at all this week.

Last week's Terek Sandpiper didn't make it into a new review period, but some wader consolation came in the form of a smart summer-plumaged Spotted Sandpiper at the North Cave Wetlands (E. Yorks) on Saturday 20th, though the bird flew off early on Sunday morning and was not seen subsequently. One-day Red-necked Phalaropes were at Grove Ferry (Kent) on Thursday 18th, Titchfield Haven (Hants) on Saturday 20th and at Upton Warren (Worcs) on Sunday 21st. Similarly fleeting was the visit of a Pectoral Sandpiper to the tidal pool at Greatham Creek (Cleveland) on the evening of Tuesday 23rd. 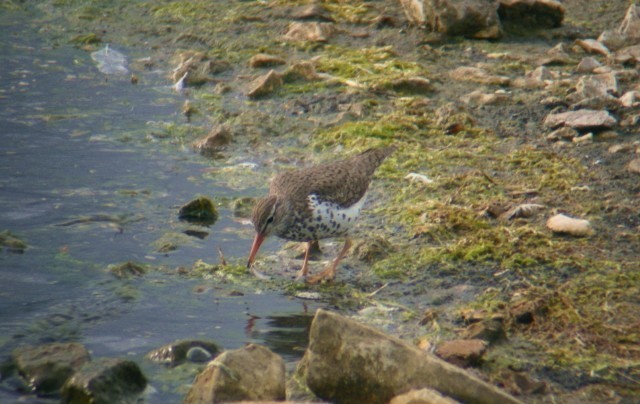 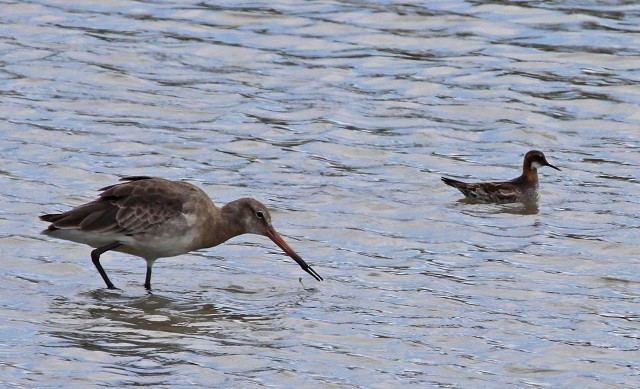 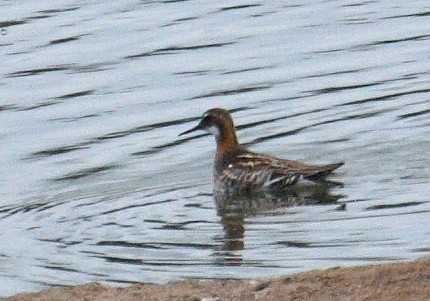 Birders on a pilgrimage to remote St Kilda found a Laughing Gull (and, for good measure, a drake Green-winged Teal) on Friday 19th, the only rare gull of the week, though Iceland Gulls in County Down and on the Outer Hebrides were somewhat unseasonable. The Forster's Tern continued its long stay at Tacumshin (Wexford). 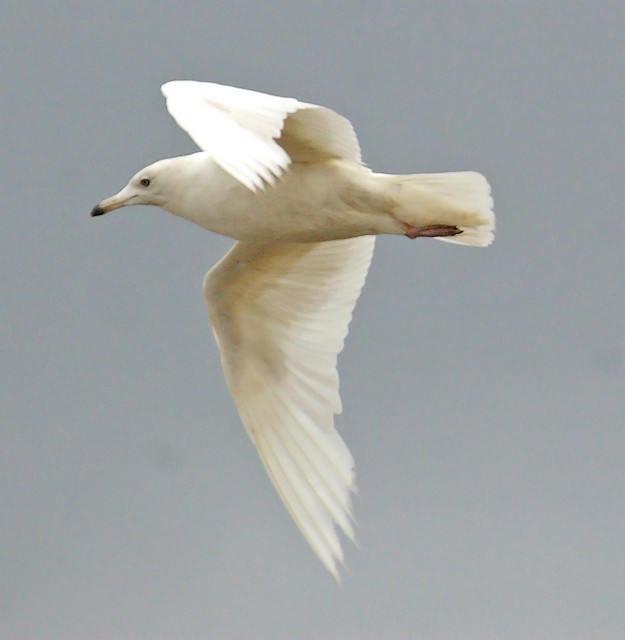 An intriguing report of a Snowy Owl by a non-birder in Lincolnshire, with convincing details (the fourth such report since January), may indicate the presence of an elusive bird summering out on the fens. No such doubts exist over females at Annagh Head (Co. Mayo) and on Lihou Island off Guernsey (the latter bird present since January). Otherwise, reports of scarce raptors were restricted to Honey Buzzards and Black Kites. The former were reported mainly from the watchpoints at Great Ryburgh and Swanton Novers (both Norfolk) and Wykeham Forest (N. Yorks) but casual sightings came in from Kent, Leicestershire, East Yorkshire and Orkney. Black Kite claims, made with varying levels of confidence, were received from Hampshire, Norfolk, Hertfordshire and Northamptonshire.

A Bee-eater was reported from Portland (Dorset) on the morning of Tuesday 23rd, and what could conceivably have been the same bird flew west over Durlston Country Park in the same county that afternoon. Last week's Lesser Grey Shrike on Bressay (Shetland) just made it into this week's review (last recorded Thursday 18th), but no Great Grey Shrikes did. Red-backed Shrike reports came in from Fair Isle (Shetland), Thornham (Norfolk), Brockholes Wetland (Lancs), Kincraig Point and the Isle of May (Fife). A probable Woodchat Shrike was reported from Dovedale (Derbyshire) on Thursday 18th but confirmed and photographed birds were at Orford (Suffolk) on Sunday 21st and at Rhossili Bay on the Gower peninsula from 18th to 21st. 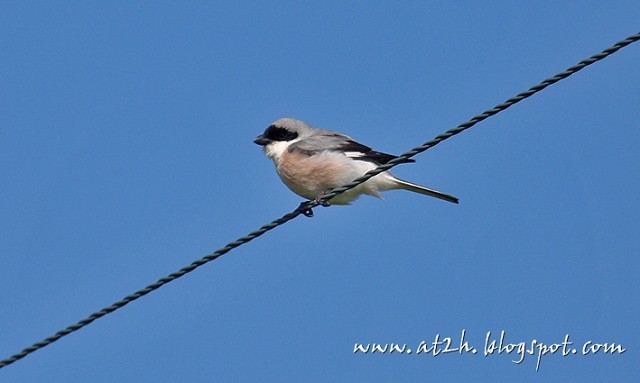 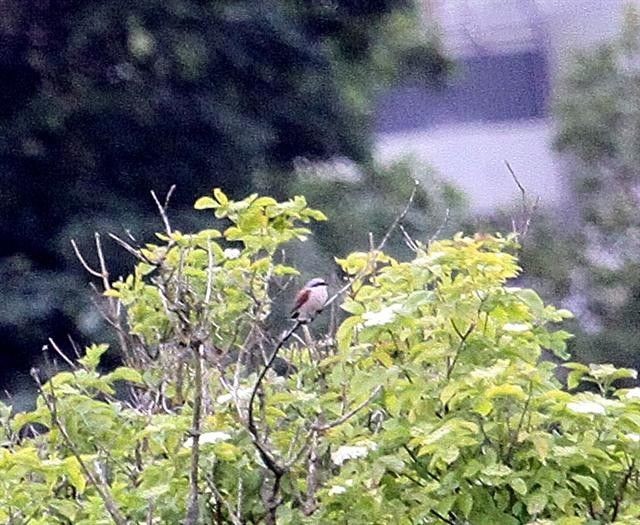 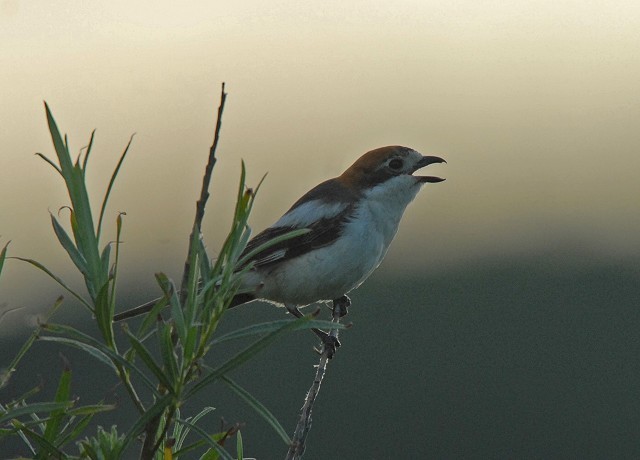 The only Bluethroat of the week was a red-spotted bird on the Isle of May on Monday 22nd. Marsh Warblers, on the other hand, were more widely reported. Popular birds were at Amwell Gravel Pits (Herts) from 22nd to 24th and on the Otmoor RSPB reserve in Oxfordshire from 23rd to the time of writing, the latter the first twitchable county record for more than 20 years. Less accessible to the masses were birds on Bardsey Island (Gwynedd), North Ronaldsay (Orkney), Unst and Mainland (Shetland), and a bird lurking in buddleia in a quarry at Wakeham on Portland (Dorset) that revealed itself for only half an hour. A male Subalpine Warbler (of the more regularly occurring western race cantillans) was singing away on Ramsey Island (Pembrokeshire) on Tuesday 23rd, but had given up, succumbed or departed by the following day. The only Red-breasted Flycatcher of the week was a female on Fair Isle on Wednesday 24th. 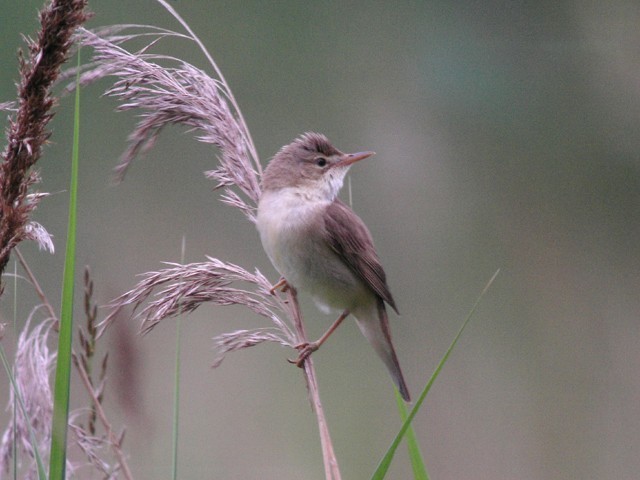 A series of Serin reports came from Portland on successive days towards the end of last week — from the Observatory garden on 18th and 19th, and from the Top Fields the following morning. Singing male Common Rosefinches were on Elemore Golf Course near Hetton-le-Hill (Durham) on Thursday 18th; at The Warren, Spurn, the same day; and at St Ouen's Pond (Jersey) from 18th to 21st at least. A highly unseasonable adult male Snow Bunting was on the beach at Cley from 21st to 24th at least. 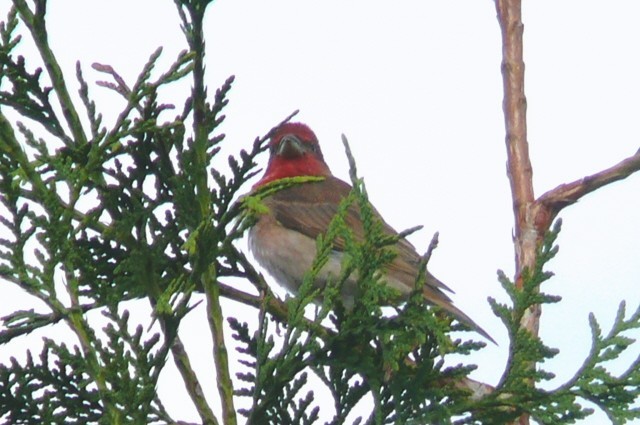 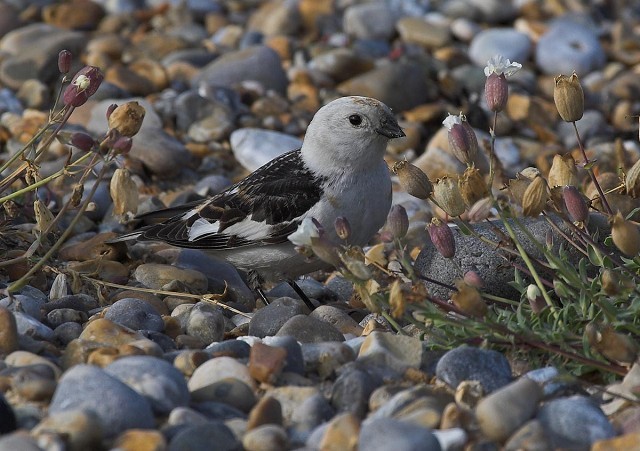 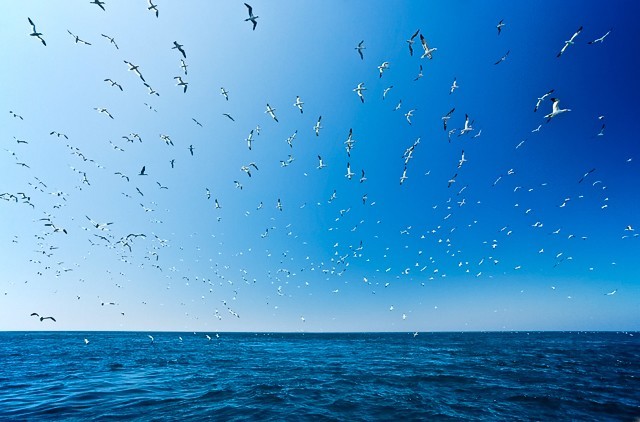 This week, we've received several great bird images that have been taken using wide angle or macro lenses, proving once again that bird photography doesn't always have to involve long focal length lenses. On a boat trip to a Gannet colony in the Channel Islands, bird photographer Paul Hillion was faced with the spectacle of hundreds of these magnificent seabirds taking to the sky around him. Using a classic wideangle zoom lens favoured by landscape photographers, Paul captured the impression of the entire sky being filled by the birds, whilst retaining a sense of place and perspective. Paul has also used colour to powerful effect, with the rich blue sky and its reflection in the sea giving a real mid-summer feel to the scene. A wonderfully evocative image. 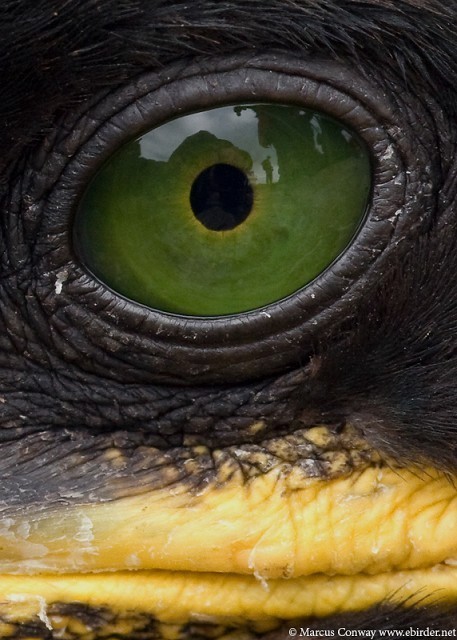 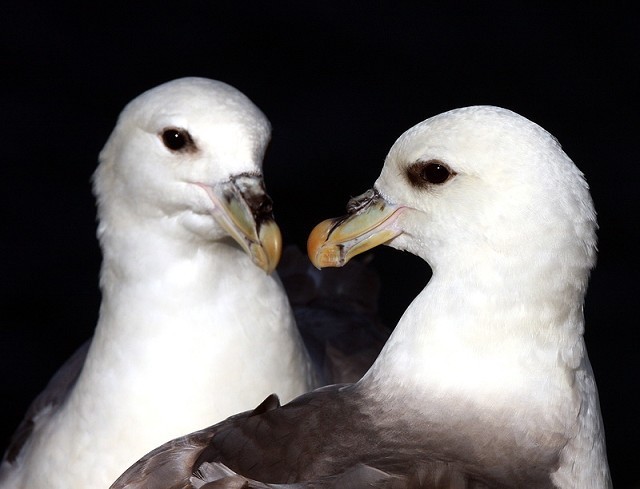 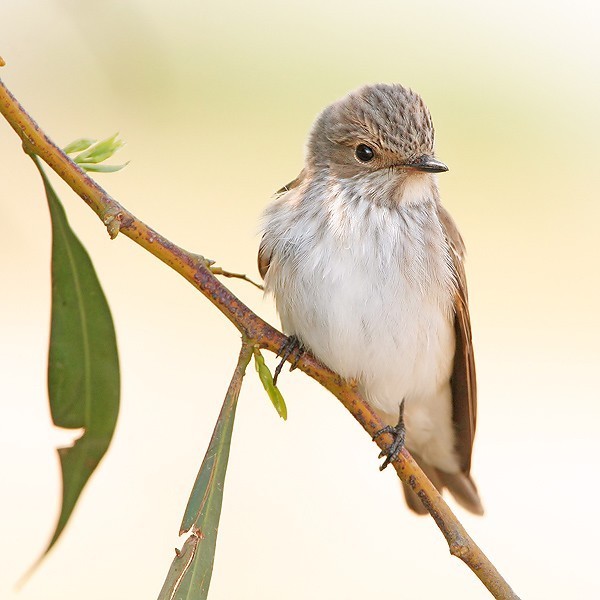 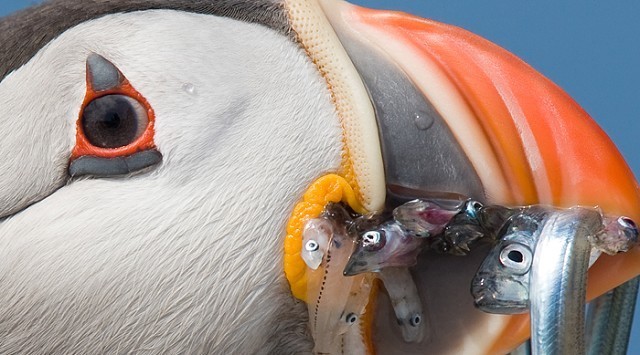 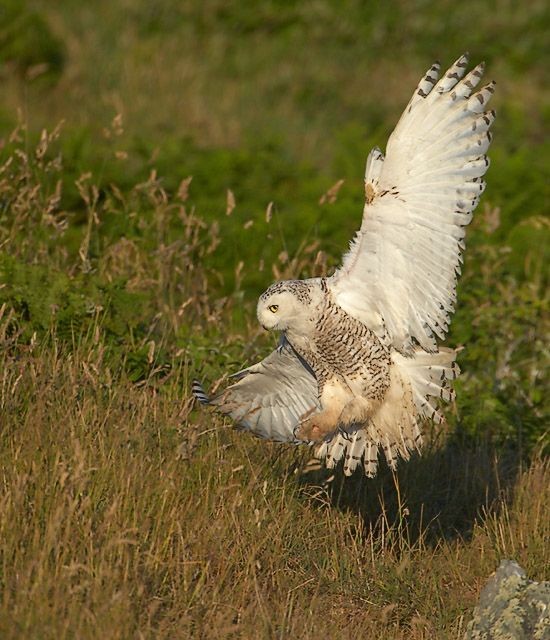 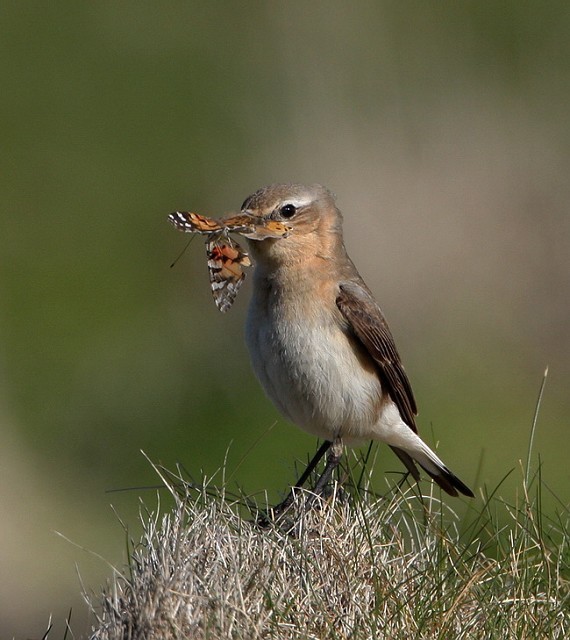 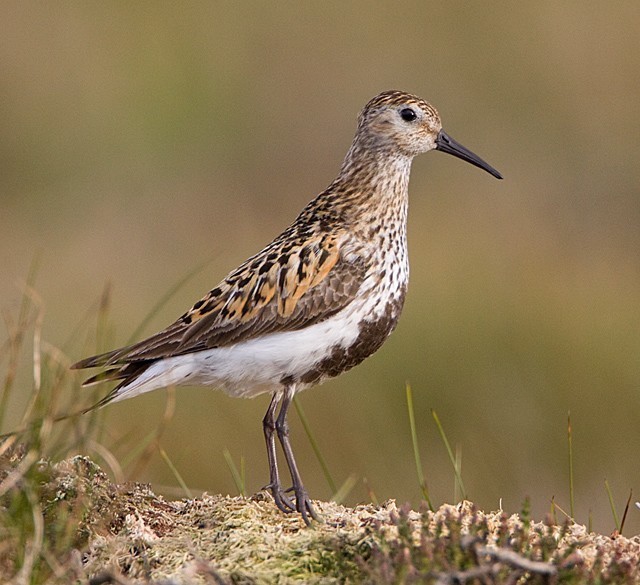 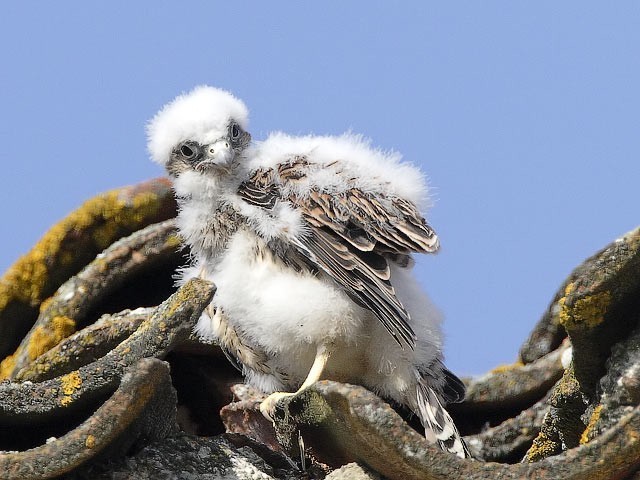 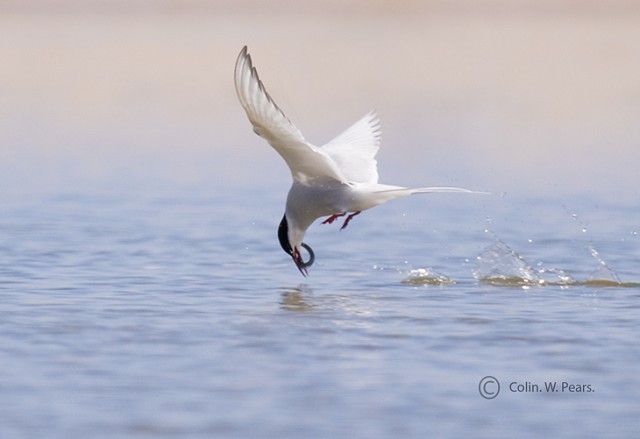 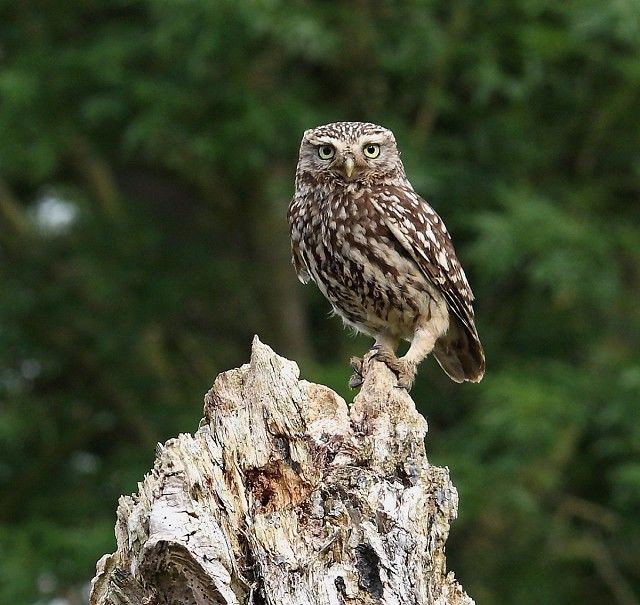