Though the weather showed considerable signs of improvement as the week progressed, migration continued at a snail's pace in what has been a largely sluggish and disappointing spring in many parts.

Of course, with a great passage of Black Terns and waders in the first few days of May, it's not all been doom and gloom, but east-coast birders have struggled to find any notable migrants whatsoever — and that continued this week, though the coming days seem to suggest reasonable promise for a late-season flurry.

Interestingly, the Black-browed Albatross was once again reported at Bempton Cliffs, East Yorks, at around 08:30 on 18th. However, just five hours later (at 14:30 German time) it was back asleep at its favoured roost site on Sylt, Schleswig-Holstein — had it really just hot-footed it back across the North Sea at an average of 70 mph? Either way, there've been no sightings in British waters since.

After last week's high hopes that the American Royal Tern was on its way to the British south coast, it was a little disappointing to hear that it was still on Alderney on 18th! That said, it wouldn't take much for the bird to make the short hop across the Channel and it evidently isn't in a rush to try and make it back whence it came...

The Pied-billed Grebe remained at Loch Feorlin, Argyll, all week and is apparently often heard by birders long it's actually seen! Breaking Scotland's recent monopoly of White-billed Diver records, one flew past a boat a couple of miles off Cornwall's Lamorna Cove on 18th. Elsewhere birds were seen on Orkney (North Ronaldsay and Westray) and Lewis, Outer Hebrides.

The King Eider was reportedly back on the Ythan Estuary, Aberdeenshire, on 21st and the Highland bird was still off Whiteness Head on 23rd, but there were no reports of Surf Scoter anywhere in Britain and Ireland over the seven days. Both of this week's Green-winged Teal were on Orkney, one on Sanday in the company of two drake Garganey and another still on North Ronaldsay. The American Black Duck was still at Strontian, Highland, while drake Ring-necked Ducks were seen on Islay and at Balnakeil. 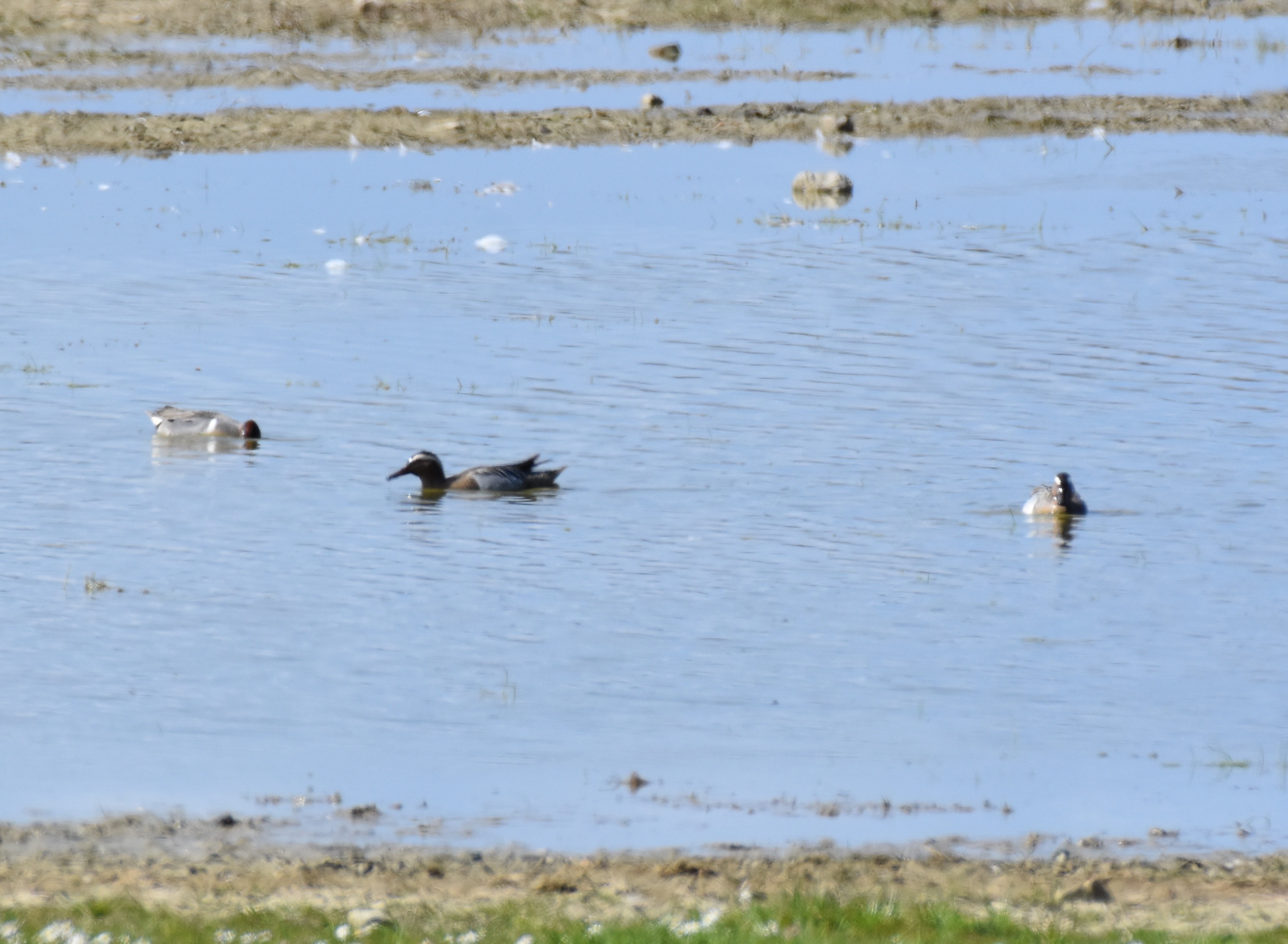 White Storks were reported from Norfolk, Suffolk (2) and North Yorkshire, though it's probable that all of these concern wandering escapes. A Purple Heron flew in off the sea at Cley, Norfolk, on 22nd, while others lingered at Probus, Cornwall, to 20th and Kenfig, Glamorgan, to 21st; a fourth individual was at Land's End on 22nd. The female Little Bittern was still on St Mary's, Scilly, to 22nd and up to three Night Herons were seen on the island. The confiding adult Night Heron also remained in Shrewsbury, Shropshire. Glossy Ibises appeared to be on the move, with flyovers in Nottinghamshire, South Yorkshire and East Yorkshire feasibly all concerning the same individual. Another new bird was brief at Summer Leys, Northants, on 23rd with long stayers remaining in Somerset and Suffolk. Exciting news also came that Cattle Egrets are breeding at Burton Mere Wetlands, Cheshire — the first of several similar announcements perhaps? 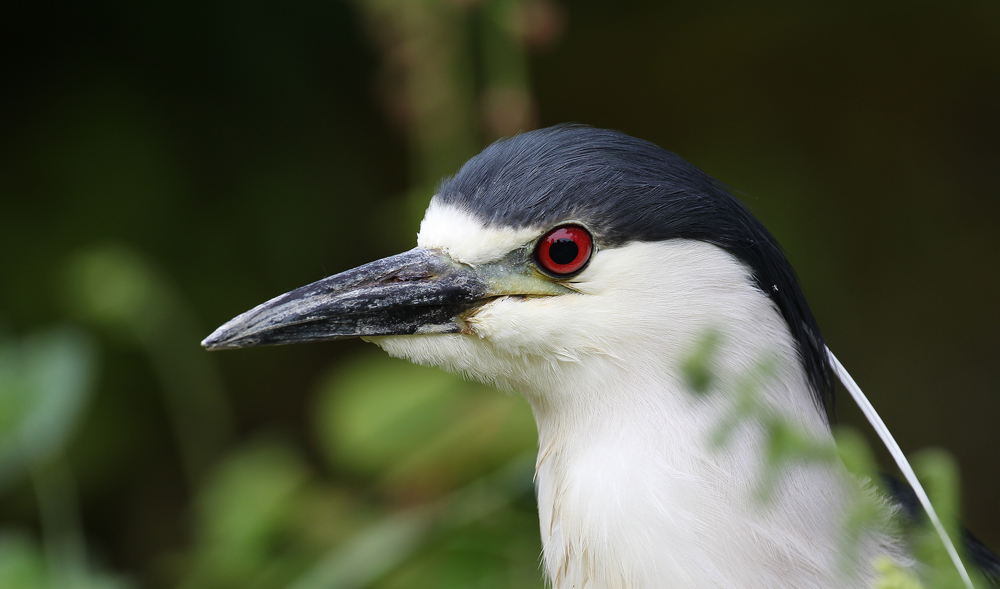 The wandering East Anglian White-tailed Eagle was seen only on 21st this week, when it was at Hickling Broad. Two Black Kites flew over Mundford, Norfolk, on 22nd and one was over Rainham Marshes, London, on 18th (a Common Crane was also there this week), with others over two sites in Suffolk on 17th, Somerset, Highland and Wiltshire. The good spring for Red-footed Falcon continues with eight birds at six sites, including two adult males together at Thorne Moors, South Yorks, and another two males over Blakeney Point, Norfolk, on 22nd. A female showed well in the North Warren and Minsmere area of Suffolk from 17th, with males briefly at Messingham Sand Quarry, Lincs, and Hickling Broad, Norfolk. The female Montagu's Harrier remained at Blacktoft Sands, East Yorks but there was no sign of the male Pallid Harrier in Lancashire this week — hopefully it left of its own accord rather than anything more sinister. 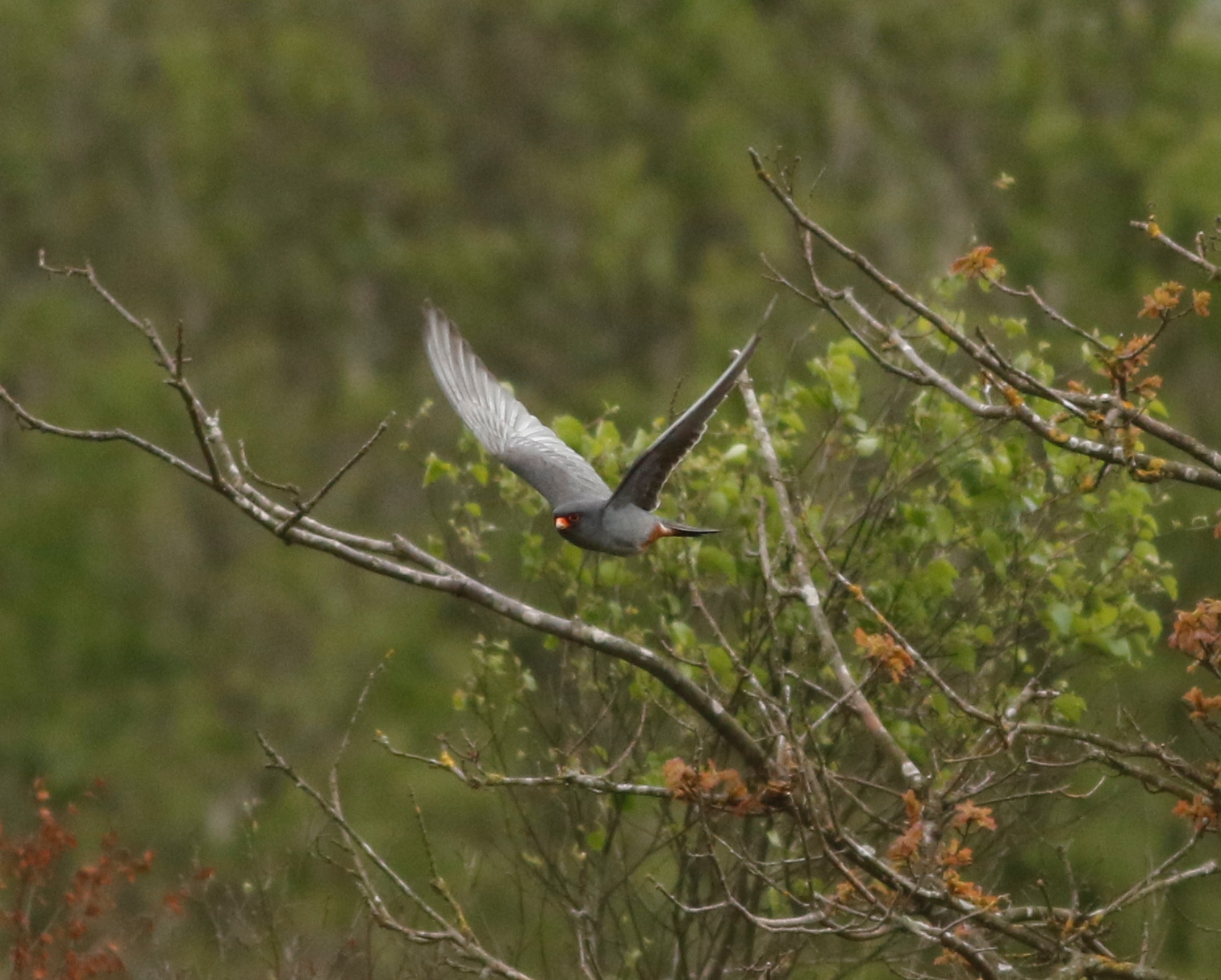 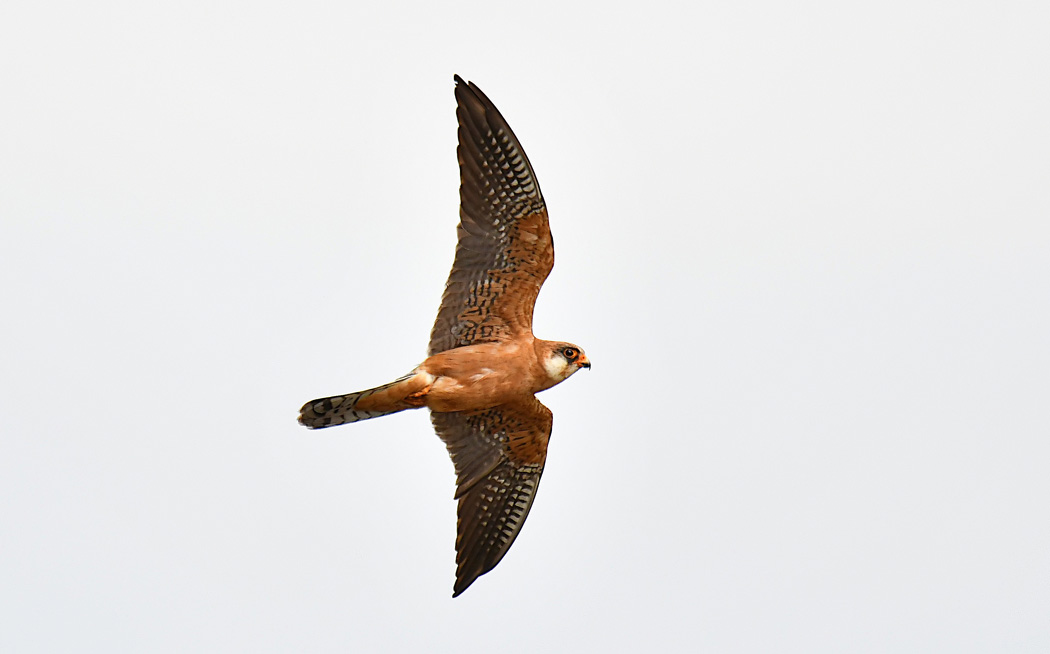 Spring Buff-breasted Sandpipers are always a treat and Burton Mere Wetlands, Cheshire, hosted one for three days from 19th, with two more at Tacumshin, Co Wexford, on 21st. A Pectoral Sandpiper was at Walmsley Sanctuary, Cornwall, from 20–22nd but the Semipalmated Sandpiper at Haroldswick, Unst, wasn't seen past 19th. Another Nearctic visitor, a Long-billed Dowitcher, was at Ringmoylan, Co Limerick, on 18th. The Spotted Sandpiper wasn't seen at Belvide Reservoir, Staffs, beyond 18th but the Cumbrian bird was still at Buttermere to at least 22nd. Fair Isle's Collared Pratincole was last noted on 18th. Black-winged Stilts visited Minsmere, Suffolk, on 17th and Cley, Norfolk, the following day. Temminck's Stints were at nine British sites and included fours in Cleveland and Northumberland. 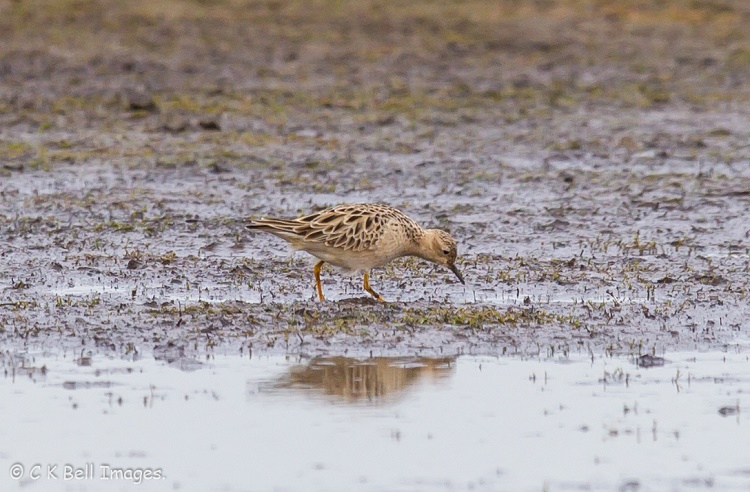 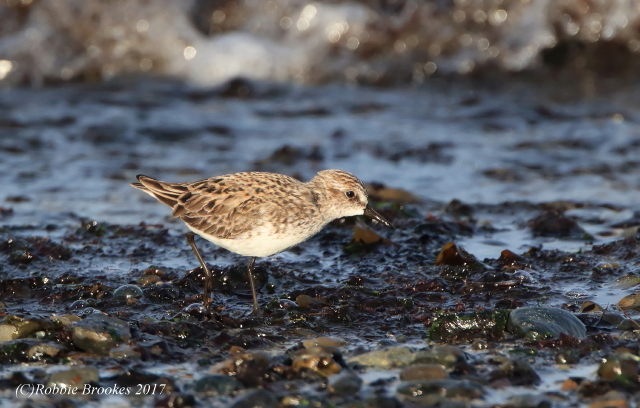 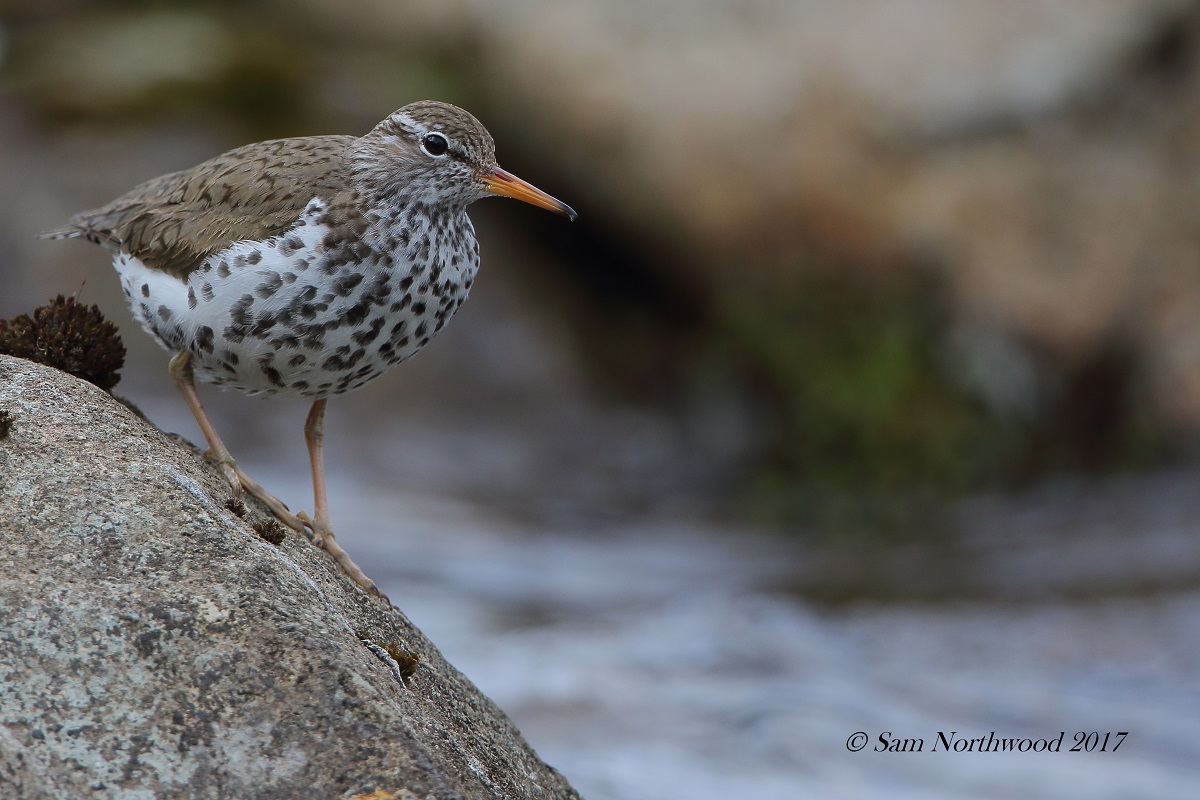 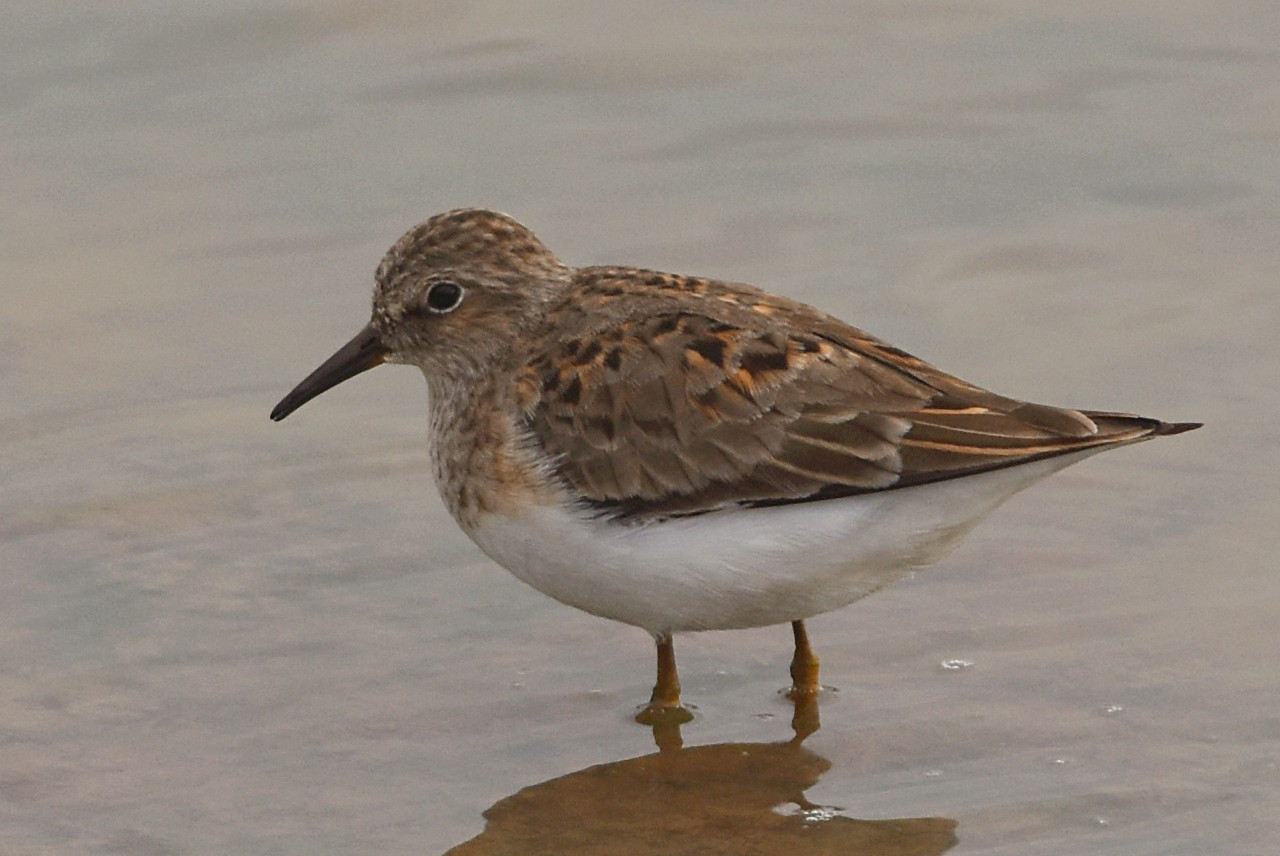 Hickling Broad has a long-standing association with Caspian Terns and another graced the site on 17–18th, before relocating to nearby Potter Heigham to 20th. A triumvirate of White-winged Black Terns at Staines Reservoirs, Surrey, on 23rd included a first-summer bird — a very rare plumage here. Late news concerned a brief Gull-billed Tern at Dungeness, Kent, on 16th. Long-staying Bonaparte's Gulls comprised the first-summer at Kenmare, Co Kerry, on 21st (the first report of it for almost a month) and another still at Longham Lakes, Dorset, as well as last week's bird still along the River Thames between Creekmouth and Rainham Marshes, London. Immature Ring-billed Gulls remained in Cornwall, Ceredigion, Co Louth and on Shetland. 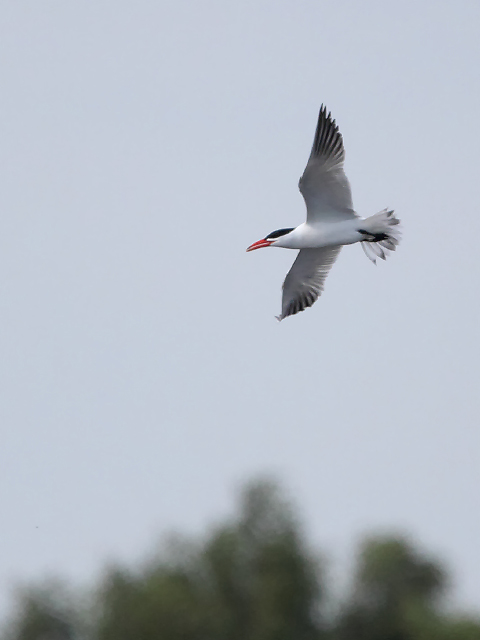 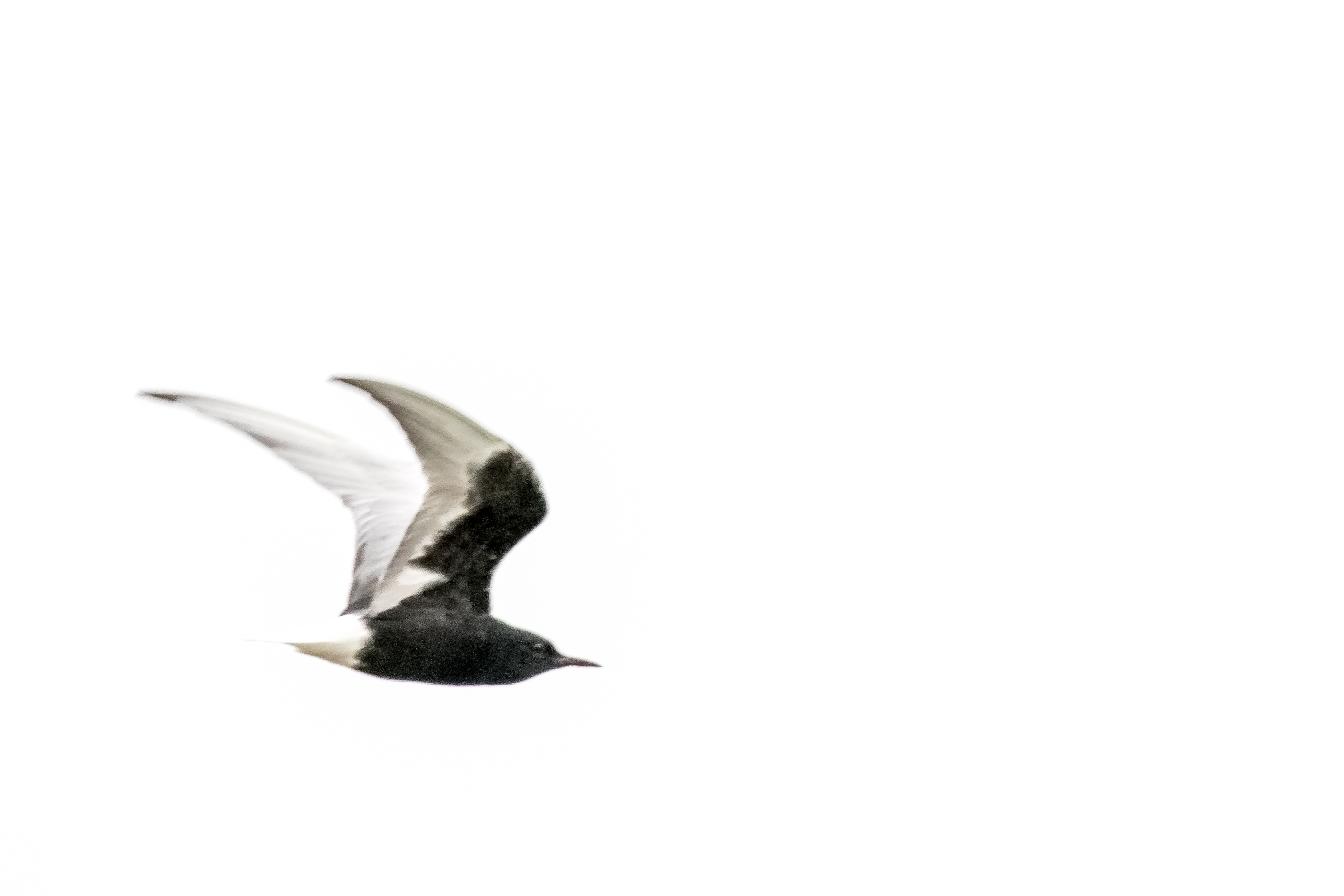 Skua passage remains sluggish off the Outer Hebrides, although a flock of 26 Long-tailed Skuas flew past Aird an Runair, North Uist, during the afternoon of 22nd. Barely any Pomarine Skuas were reported, with flocks of seven past Cape Clear, Co Cork, on 17th and four past Saltcoats, Ayrshire, on 19th the largest groups seen.

A smattering of scarce drift migrants included Red-breasted Flycatchers on Mainland Shetland, Fair Isle and at Buckton, East Yorks. Female Red-backed Shrikes made it to Fair Isle and Unst, both islands also claiming Icterine Warblers on 22nd. Red-spotted Bluethroat is an iconic bird of drift migration in the Northern Isles in May, and all but two of this week's ten or so were on either Shetland or Orkney, the exception being males at Cairnbulg, Aberdeenshire, and Blakeney Point, Norfolk, on 22nd.

A male Grey-headed Wagtail at Carinish, North Uist, was a nice west-coast record in a quiet week for the species (one other was seen on Fair Isle). Just one the six Eurasian Hoopoes reported this week proved twitchable — the bird at Ravenscar, North Yorks, from 18–20th. A total of three were reported in Ireland (Counties Antrim, Waterford and Westmeath). Last week's Short-toed Lark remained at Cogden Beach, Dorset, to 18th, another was found on St Agnes, Scilly, on 22nd, and a third was at Funzie, Fetlar, Shetland, on 23rd. A decent week for Golden Orioles saw a dozen reported, including up to two lingering at Portland Bill, Dorset, to 18th. Two Red-rumped Swallows were also brief visitors to Portland on 18th, with singles in Suffolk, Lancashire and Durham on 19th, a fly-through at Spurn, East Yorks, on 20th and brief birds near Hastings, East Sussex, on 22nd and Twyford, Hants, on 23rd, the latter date also producing one on Fair Isle. A Woodchat Shrike lingered on St Mary's, Scilly, while another hung on at Wrangaton, Devon, and two were found on 23rd: at Brading Marshes, IoW, and on Great Saltee Island, Co Wexford.

An immature female subalpine warbler was trapped and ringed at Calf of Man, IoM, on 23rd. Among a series of possibles, confirmed Iberian Chiffchaffs sang at Prussia Cove, Cornwall, on 18th and Walsey Hills, Norfolk, to 21st. Savi's Warblers remained in good voice at Minsmere, Suffolk, and Hickling Broad, Norfolk, while the year's first Marsh Warbler was in song at Lakenheath Fen, Suffolk, from 21st. A Great Reed Warbler was on private land at Branston, Staffs, on 21st. A couple of brief Yellow-browed Warblers were along the Holderness coast, at Kilnsea on 20th and Grimston the following day, while a Hume's Leaf Warbler was reported singing at Westleton, Suffolk, on 18th. 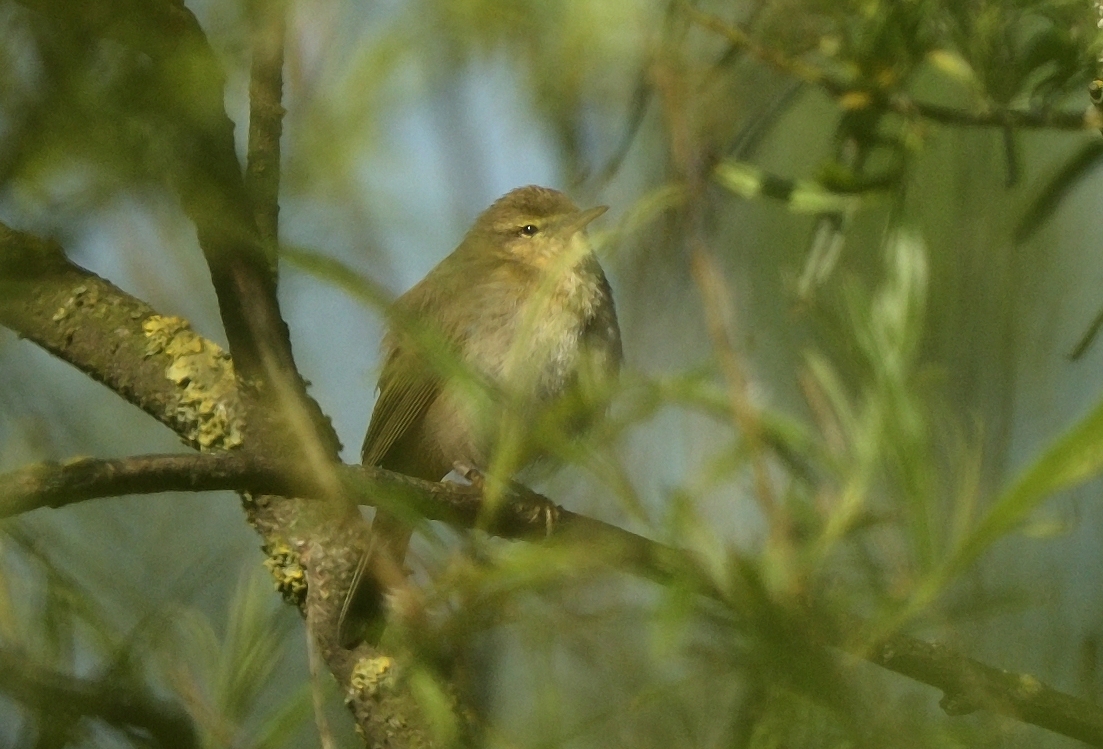 Two Rustic Buntings were found on Shetland: a male singing at Baltasound, Unst, on 21st and a female on Isle of Noss on 23rd. A Red-throated Pipit was on Fair Isle on 17–18th and another flew over Blakeney Point, Norfolk, on 22nd. An Arctic Redpoll was at Quendale, Shetland, on 18th. 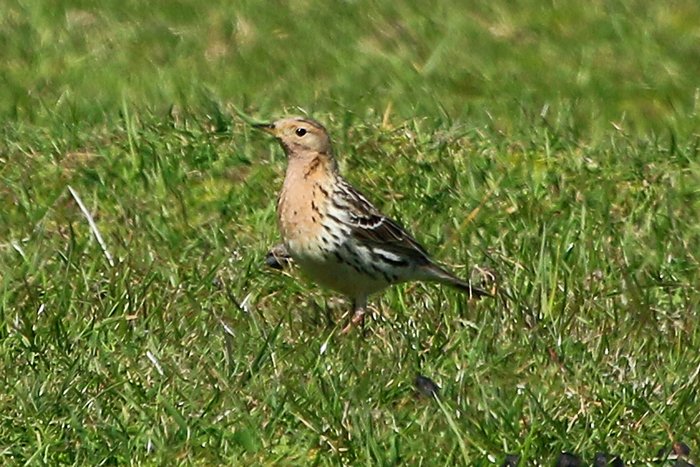 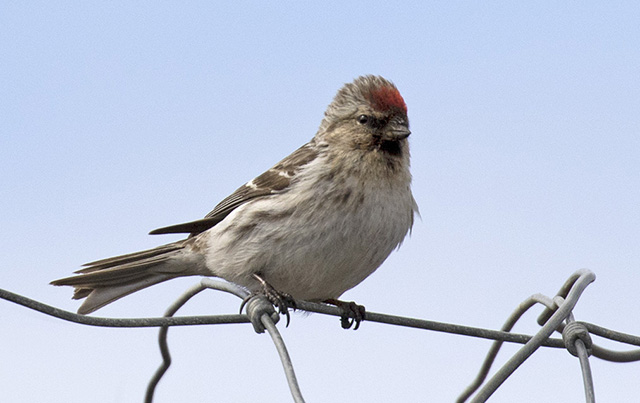 A quite outstanding Dutch record on 22nd concerned a male Seebohm's Wheatear at The Hague — a first for north-west Europe. Currently treated as a subspecies of Northern Wheatear, Seebohm's breeds in the Atlas Mountains of north-west Africa and winters south of the Sahara. Given its north–south movements each spring, you could actually argue that this taxon was overdue an appearance further north and that it is a more likely vagrant than other species that have already made it here, such as Moussier's Redstart. 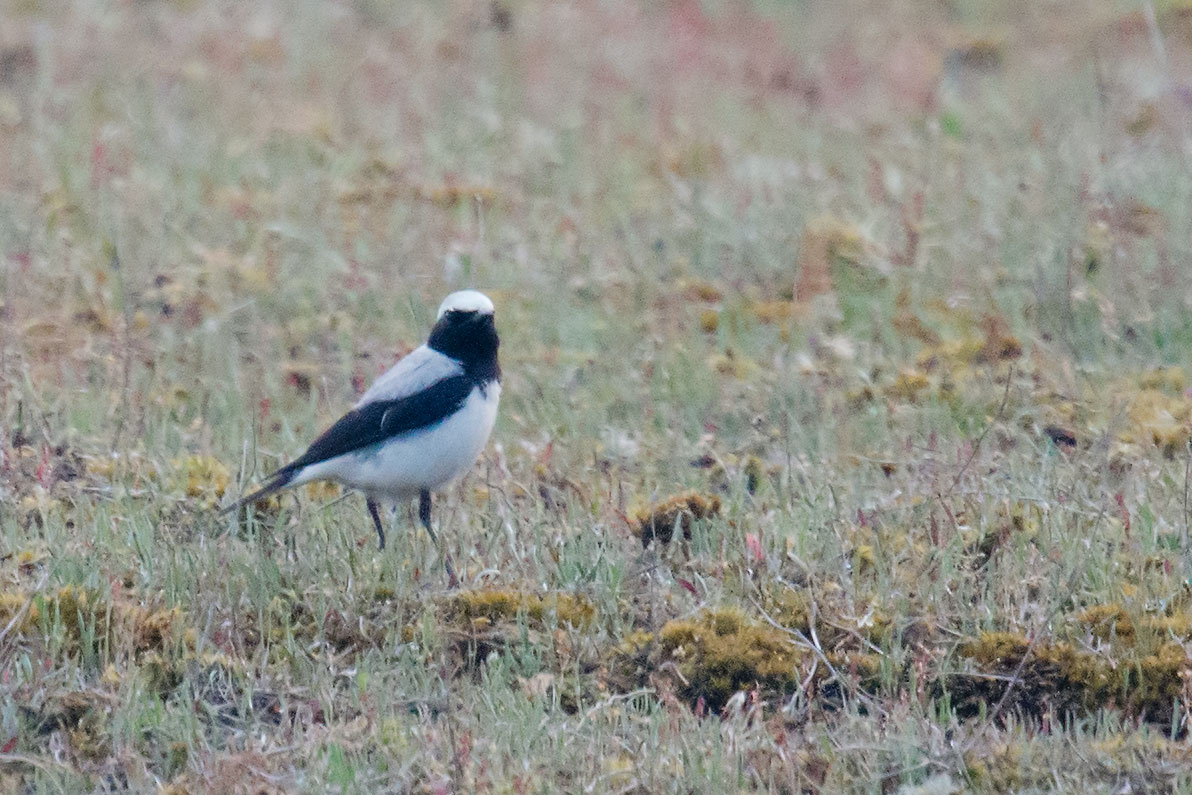 Another superb record was Finland's second Pied Bushchat, present on the island of Utö on 19–20th. Again, this must be viewed as a genuine (if improbable) candidate for making it to Britain in the future. 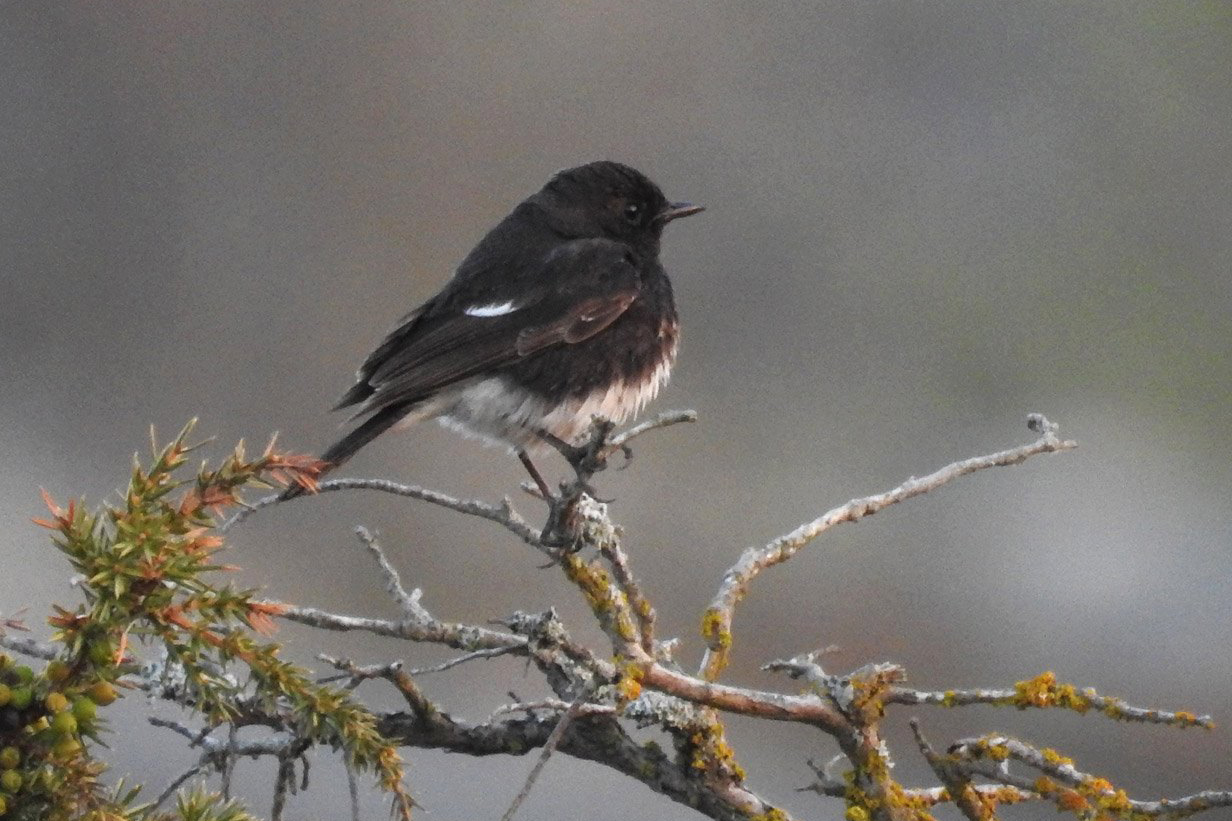 A group of 27 Eurasian Griffon Vultures was seen in the Netherlands on 21st, while France's first confirmed Eastern Bonelli's Warbler sang at Vic-la-Guardiole, Hérault, on 21–22nd. Another great French record, at least in recent times, was the Red-necked Nightjar flushed by a dog and photographed at Gruissan, Aude, on 17th. On Mallorca, a dark-morph Western Reef Heron was at S'Albufera on 22nd.

A Lammergeier arrived in off the sea in southern Denmark on 20th and continued north-west through the country. An adult Laughing Gull at Farsund, Vest-Agder, on 19th was just the sixth for Norway, while a Franklin's Gull at Húsavík from 22nd was the sixth for Iceland. The American White-winged Scoter continued off Svenska Högarna, Stockholm, throughout the week. 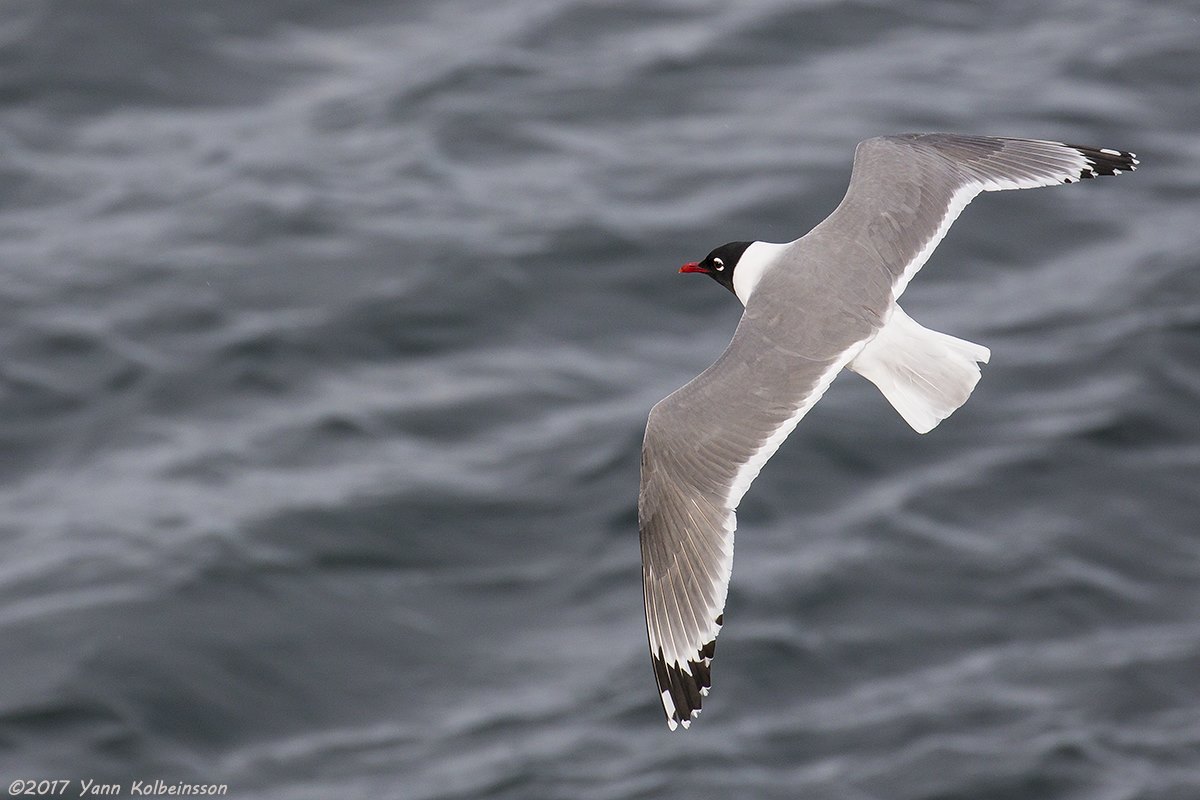