In a changeable week that saw the first significant depression of the autumn crash into western areas over the weekend, seabirds once again dominated proceedings across Britain and Ireland, with the great majority of the week's highlights observed from headlands in the south-west of England and western Ireland.

Top billing of course goes to the adult Red-billed Tropicbird that flew past Pendeen (Cornwall) at around 08:40 on the morning of Sunday 18th, seen by just one well-placed observer for a matter of seconds. Thinking quickly, he took a short series of record shots before the bird was lost to view; despite scanning, it could not be picked up again and, unfortunately, neither was it seen by any of the 40 or so observers seawatching from the more traditional spot by the lighthouse compound. Despite the bird's close proximity to shore, it had clearly not lingered and a wider search of likely sites in the Land's End area drew a blank. With three British records and single occurrences from Irish and Channel Islands waters since the turn of the century, thoughts of a twitchable bird (à la Azores White-tailed) are perhaps not too far-fetched. 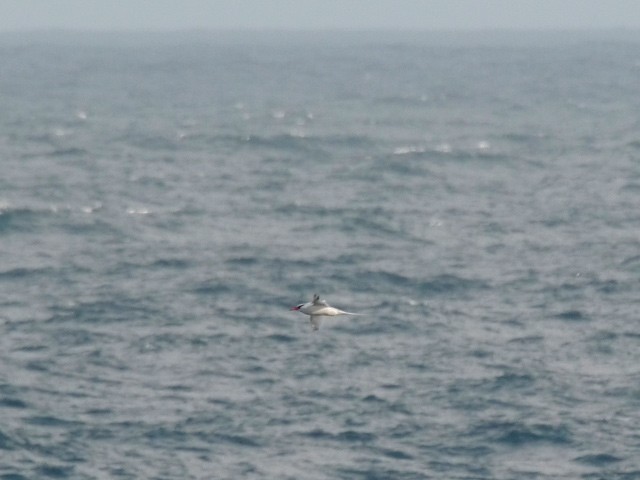 There are not likely to be many occasions in British birding history when Swinhoe's Storm-petrel is relegated to an 'also-ran' but, in light of the tropicbird, Fair Isle's rule-shattering songster found itself upstaged. Still singing overnight on Thursday night, the bird was again trapped in the early hours of Saturday morning. This proved to be its final appearance, with no sign of the bird in the following evenings and, now that ringing activity has stopped in the bird's favoured area, it's "game over" for prospective twitchers — at least until 2014.

Best of the rest was a reported Barolo Shearwater past Kerry Head (Kerry) on 19th. It proved another fabulous week for Fea's-type Petrel records: during Saturday's blow, both Galley Head (Cork) and Berry Head (Devon) registered fly-bys but it was all about the Bridges of Ross and its return to form as one of best sites (if not the site) to see Fea's anywhere in British and Irish waters. One flew past during the evening of 16th and there were two further sightings during 17th, one during the late morning and another in the early evening. And, on 20th, a further sighting involved a bird parading along the north side of the Loop Head peninsula before rounding the headland itself. With stop-press news of another past Mizen Head (Cork) this morning (22nd), it seems likely there will be many more sightings before the autumn is out. In contrast, it's been a fairly sparse year for Wilson's Storm-petrels, though one was seen and photographed well from a Scilly pelagic on 15th. 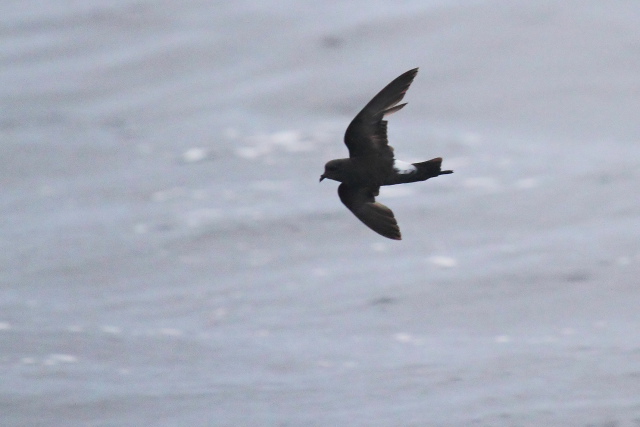 Both large shearwater species provided excellent showings during the week. Bridges of Ross weighed in with 614 Great Shearwaters (the highest individual count of the week) in what must have been a captivating seawatch on 17th — 9 Sabine's Gulls (again, a weekly high count) and a handful of Cory's Shearwaters provided quality back-up. It was Galley Head that claimed the week's top Cory's counts, with 800 in 2.5 hours during the evening of 20th and a further 1,107 in four hours the following morning — 290 Great Shearwaters also passed in what must have been a mesmerising spell. Smaller numbers of both were logged widely across the South-west Approaches — Scilly pelagics, Scillonian crossings and various headlands all chipped in with regular tallies. More significant counts included 324 Cory's and 35 Greats past the Old Head of Kinsale (Cork) on 21st, 62 Greats past Brandon Point (Kerry) on 17th and 55 Greats south of Toe Head (Cork) on 19th. Sabine's Gulls also increased in both number and regularity, particularly in the far west. 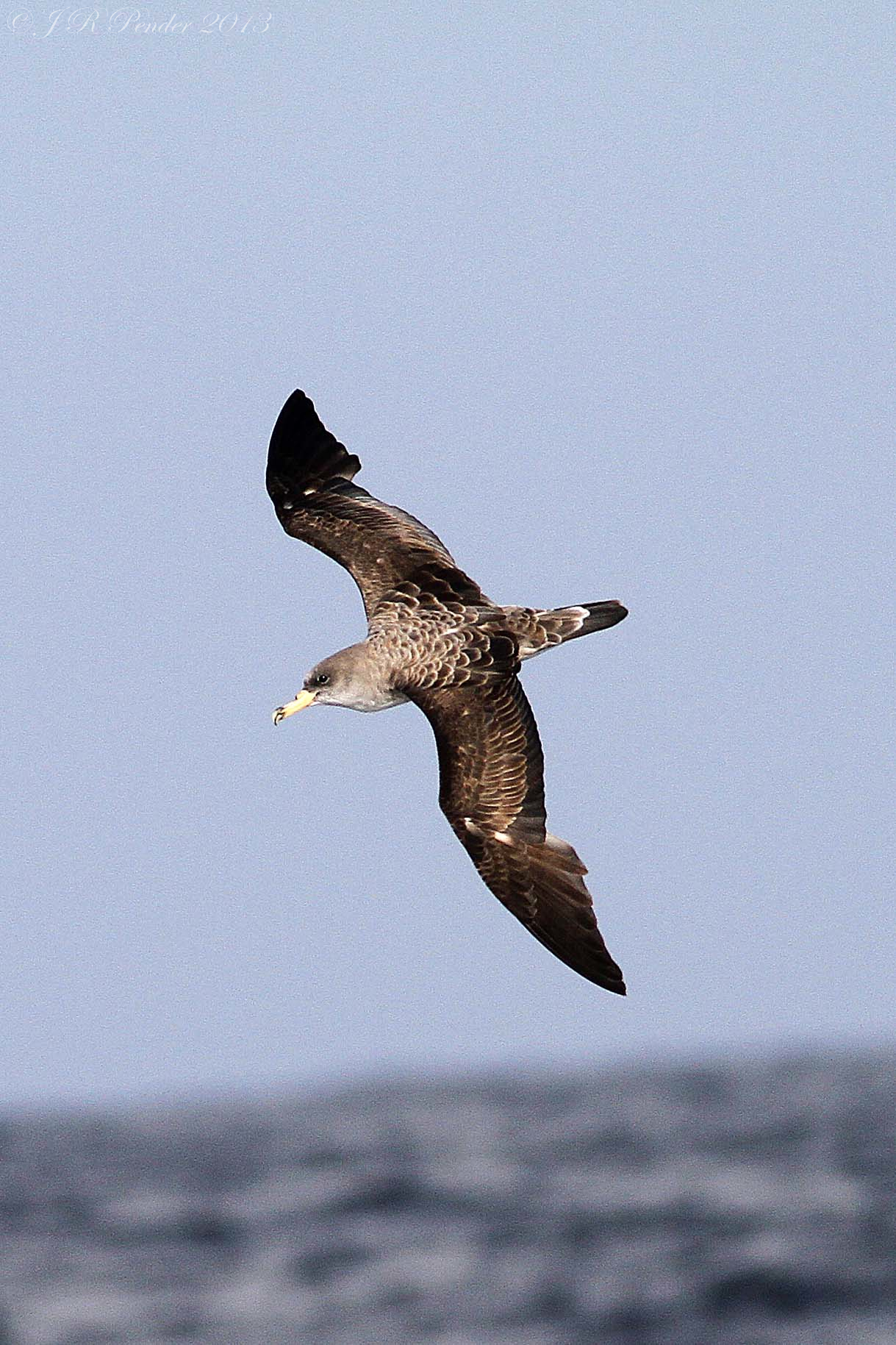 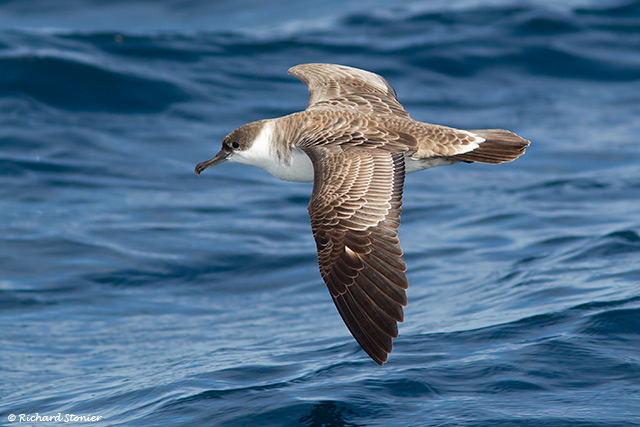 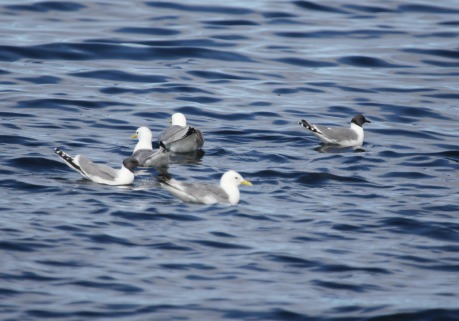 While seabirds were the order of the day in the far south-west, an old friend stole back at least some of the limelight in Northumberland — the Bridled Tern, after last being seen in Aberdeenshire on 8th August, made a surprise reappearance on the Farne Islands on 15th–16th and again on 19th. With post-breeding dispersal of the North-east's tern population now imminent, expect the Bridled to make landfall at one or two more locations before the summer is out — perhaps the time is now for east-coast patchers between Durham and Kent?

With conditions in the Atlantic more unsettled throughout the week, it was perhaps no surprise that the first dusting of Nearctic shorebirds found their way to British and Irish territory. A mobile adult American Golden Plover on Annagh Beach (Mayo) was clearly fresh in on 20th, though the early action climaxed with a stunning juvenile Wilson's Phalarope on the saltmarsh at Broadford Bay, Skye (Highland) from 16th until the end of the review period. As ever, Tacumshin (Wexford) scored heavily, with a Semipalmated Sandpiper there on 21st in addition to up to three remaining Buff-breasted Sandpipers, a Pectoral Sandpiper and a new Lesser Yellowlegs from 20th. The 'legs was one of three new adults to arrive during the week, with further birds at St. Anthony (Cornwall) and Kinneil Lagoon (Forth) both on 19th, in addition to the long-stayer still in Carmarthenshire. New Buff-breasts were at Streedagh (Sligo) on 18th, Pennington Marshes (Hants) on 20th and at the Bridges of Ross on 21st, the last continuing the fantastic run of 'in-off' records at the Bridges that includes a flock of six birds back in late August 2009! 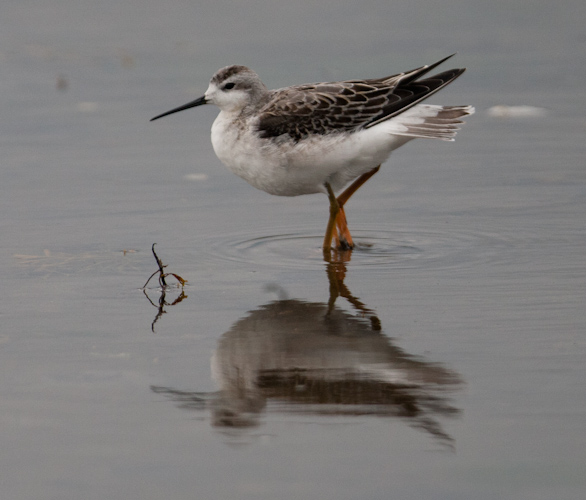 Staying put was the Hampshire Long-billed Dowitcher, still at Pennington Marshes to at least 19th though elusive at times. Nine Pectoral Sandpipers included five new birds, in Cornwall, Somerset, Kent, Essex and Cleveland, but a Temminck's Stint at Donna Nook (Lincs) on 16th was one of only two seen — the other still on the Oare Marshes (Kent) on 17th. Red-necked Phalaropes arrived at Gibraltar Point (Lincs) on 17th and at Cantley Beet Factory (Norfolk) on 18th–21st, while a Grey Phalarope was seen from a pelagic in Lyme Bay (Dorset) on 20th. Also on the Oare Marshes, the Bonaparte's Gull was seen on 15th, while the Lancashire adult was still in the Heysham area all week and a second calendar-year Ring-billed Gull was again in Tralee (Kerry) on 16th. 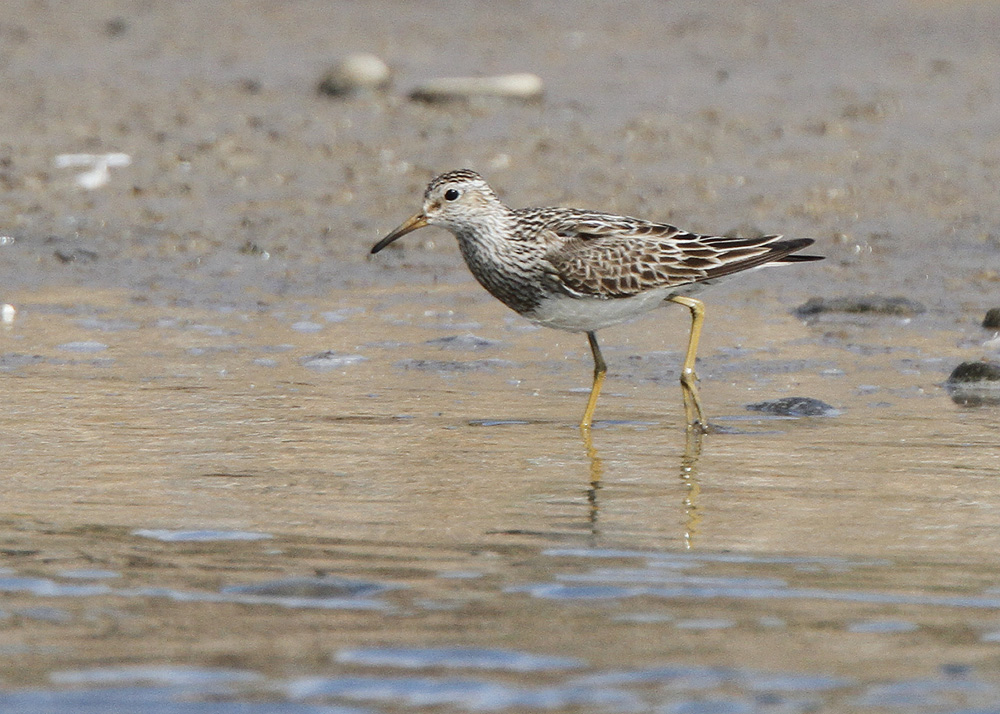 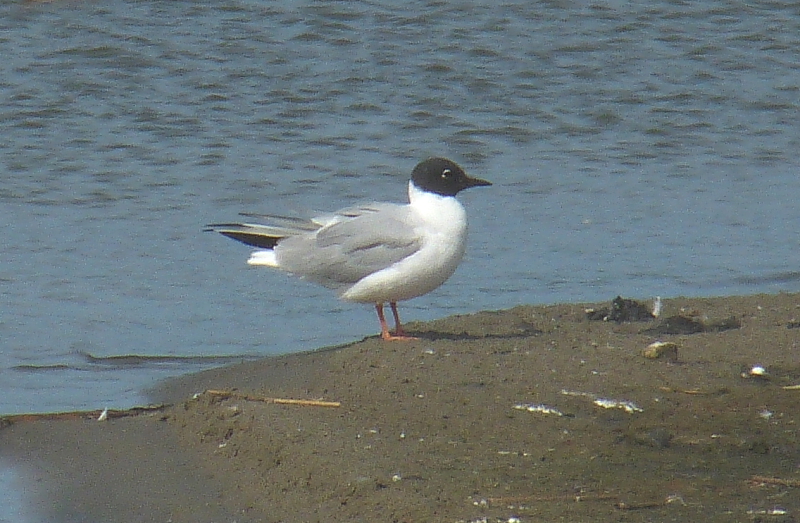 In County Mayo, the long-staying drake Black Duck was again reported from Achill Island on 20th — the first sighting for four months. A female Blue-winged Teal was found on North Ronaldsay (Orkney) on 17th, while the eclipse drake remained on the Ouse Washes (Cambs) to 18th. The Ferruginous Duck remained at Chew Valley Lake (Somerset) throughout as did the Spotted Crake. Continuing Ring-necked Ducks in North Yorkshire and County Antrim were supplemented by a returning drake near Finntown (Donegal) on 17th–18th. Three Surf Scoters remained off Murcar Golf Course (Aberdeenshire) and a female was in the county off Porthlethen on 21st.

South Yorkshire's Night Heron remained at Old Moor throughout the week and a Purple Heron was photographed flying over Tresco (Scilly) on 18th. A new Cattle Egret flew past Fethard-on-Sea (Wexford) on 20th and the Kent individual was still at Elmley on 18th. Post-breeding dispersal of Great White Egrets continues, with an impressive 12 seen together at Meare Heath (Somerset) early morning on 20th. The Glossy Ibis was still in Pembrokeshire all week and Norfolk's brace of escape White Storks reappeared in the Great Yarmouth area from 20th. 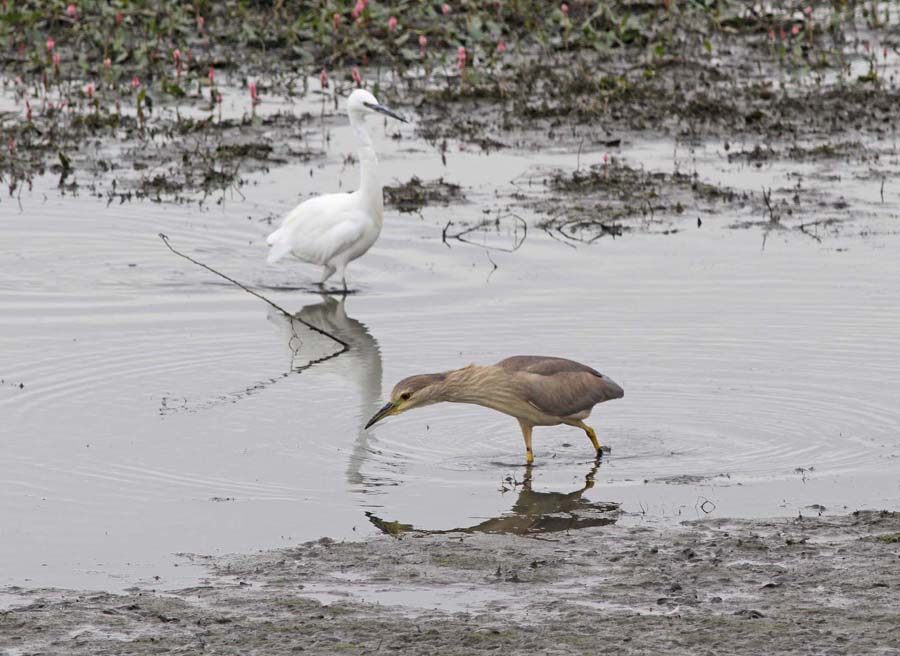 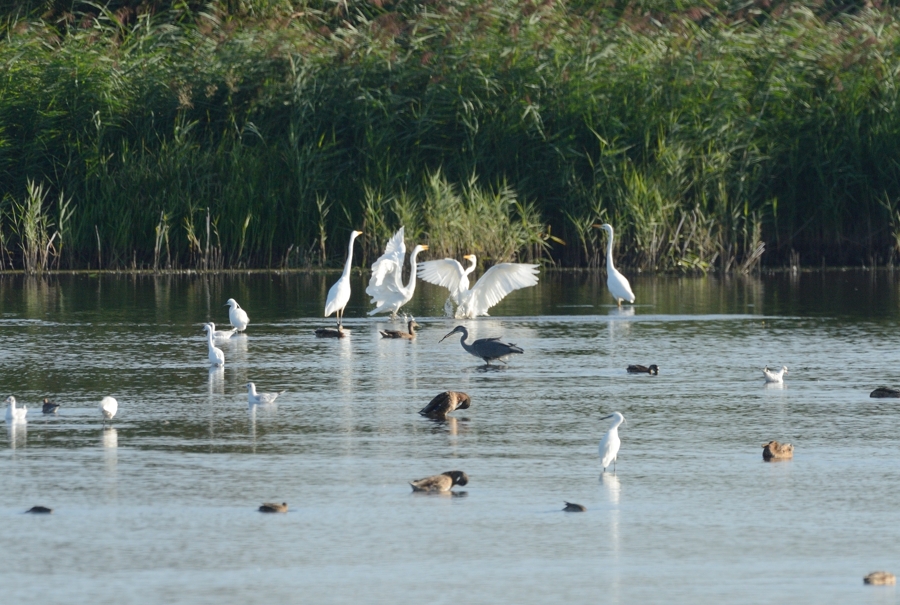 A female Red-footed Falcon was seen over Saltfleetby (Lincs) on 18th, and the Snowy Owl was still on Arranmore Island (Donegal) that day.

Despite the focus on seawatching in the south-west, there were at least some signs that songbird migration was gradually swinging into action. As well as a promising spread of commoner migrants such as a Pied Flycatchers, Redstarts and Tree Pipits from 20th onwards, a handful of scarcities arrived. A brief Wryneck was on St. Mary's on 20th, with two Short-toed Larks also on the archipelago: the remaining Bryher bird was still there to 18th and another was on St. Martin's on 20th. Up to two Citrine Wagtails were on Fair Isle throughout the week, where the autumn's first Barred Warbler was notched on 16th, a Common Rosefinch arrived from 19th and the Western Subalpine Warbler remained. An Icterine Warbler was on private land near Bawdsey (Suffolk) on 19th, while the first returning Red-backed Shrikes were on Foula (Shetland) on 19th and St. Mary's (Scilly) on 21st. Two Aquatic Warblers were at La Claire Mare (Guernsey) on 17th though the wait for the first mainland individual of 2013 goes on.

Following a smart juvenile Woodchat Shrike at Gibraltar Point (Lincs) on 17th, another was found at Harrington Airfield (Northants) on 20th. This is the first county record since a couple of 19th-century occurrences (one of which is considered dubious) and as such was a welcome addition to many a county list. 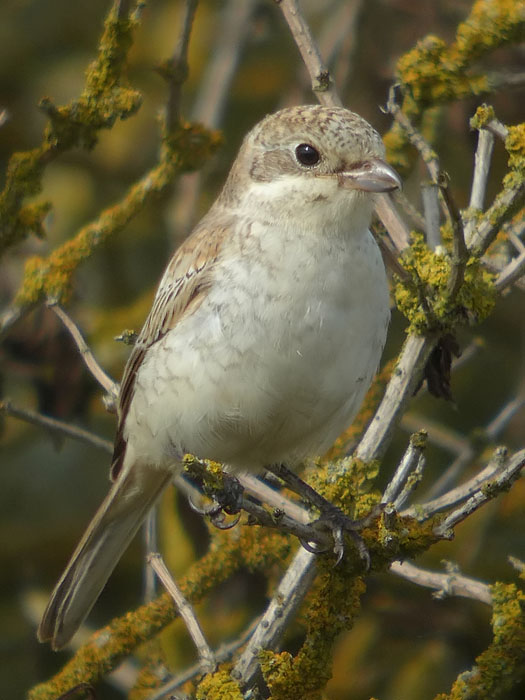 South Yorkshire's popular mega-flock of Two-barred Crossbills continued to entertain visitors to Broomhead Reservoir throughout the week. On 15th, an amazing nine birds were present: a male, two females and six juveniles! Numbers varied on a daily basis although, on 21st, at least eight reportedly included two males, which would nudge the number of birds present on site into double figures. Elsewhere, a juvenile trapped and ringed on North Ronaldsay (Orkney) on 19th gave hope that the influx of birds is not yet over, while a juvenile at Lynford Arboretum (Norfolk) on 21st is probably one of the birds seen there back in late July. 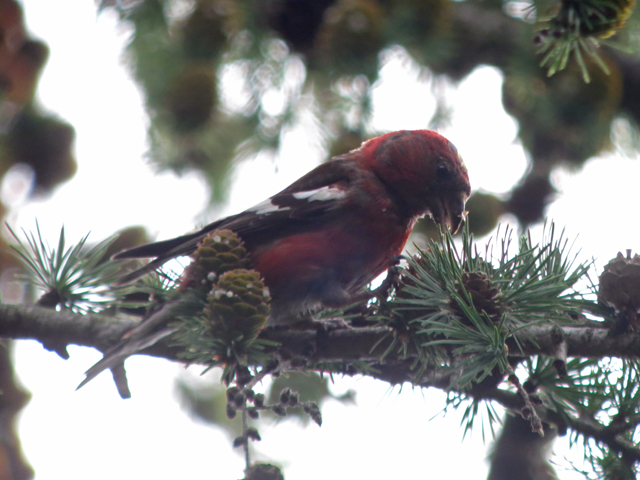 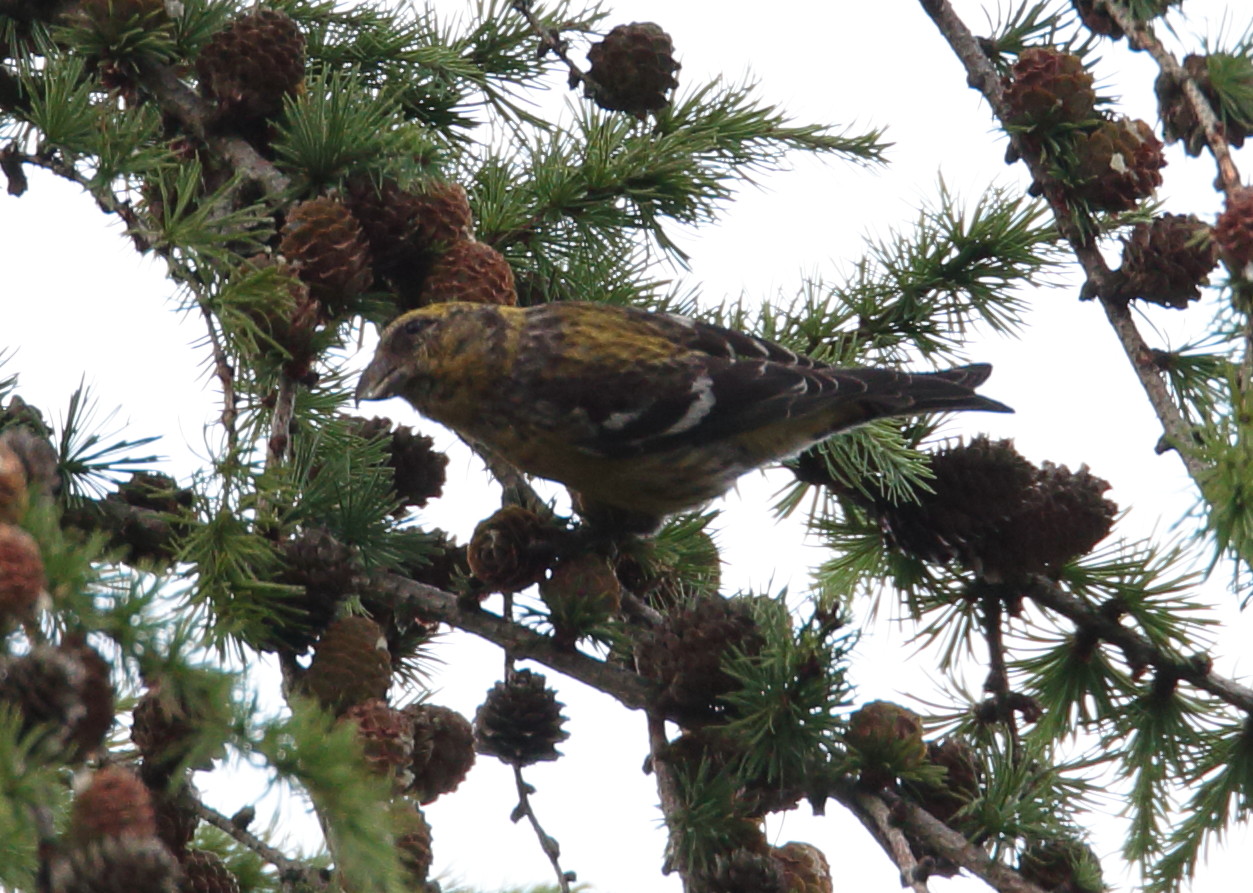 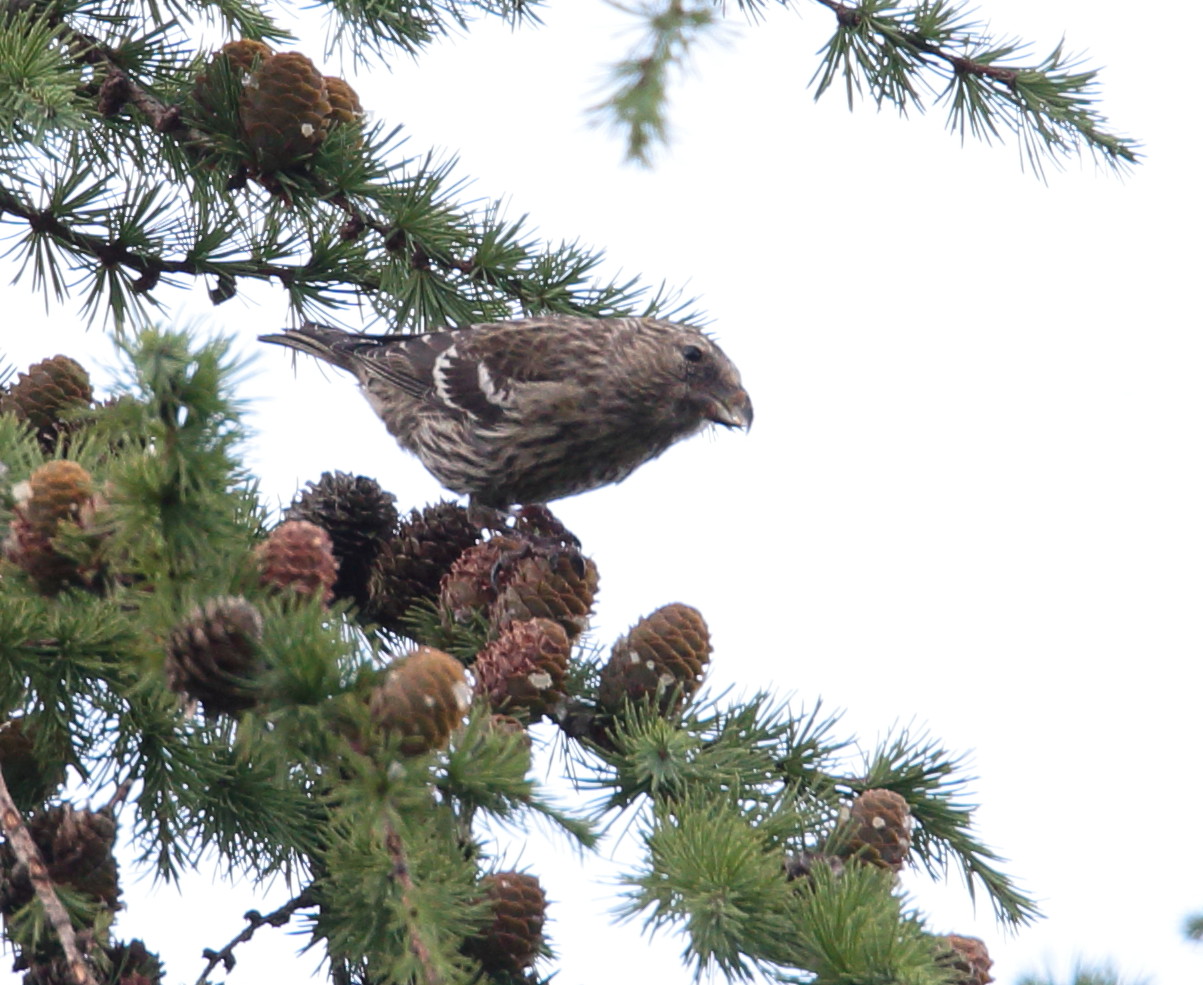 Insect news concerned the continuing presence of at least three Long-tailed Blue butterflies at Kingsdown Leas (Kent); others included a male photographed at Dunwich Heath (Suffolk) on 15th and further singletons on Hayling Island (Hants) on 16th and at Bockhill Farm (Kent) on 18th. A Southern Migrant Hawker was still at Wat Tyler Country Park (Essex) early in the week and a Monarch was reported at Widewater Lagoon (W Sussex) on 20th.

With another low-pressure system careering past the west coast of Ireland as we head into the weekend, further seabirds (and a few Nearctic waders) seem on the cards although, for the first time this autumn, a sustained easterly-based airflow looks forecast to develop. This in turn should create some classic early autumn conditions with arrivals from both east and west descending on to our shores. Watch this space — next week's round-up could prove a busy one! 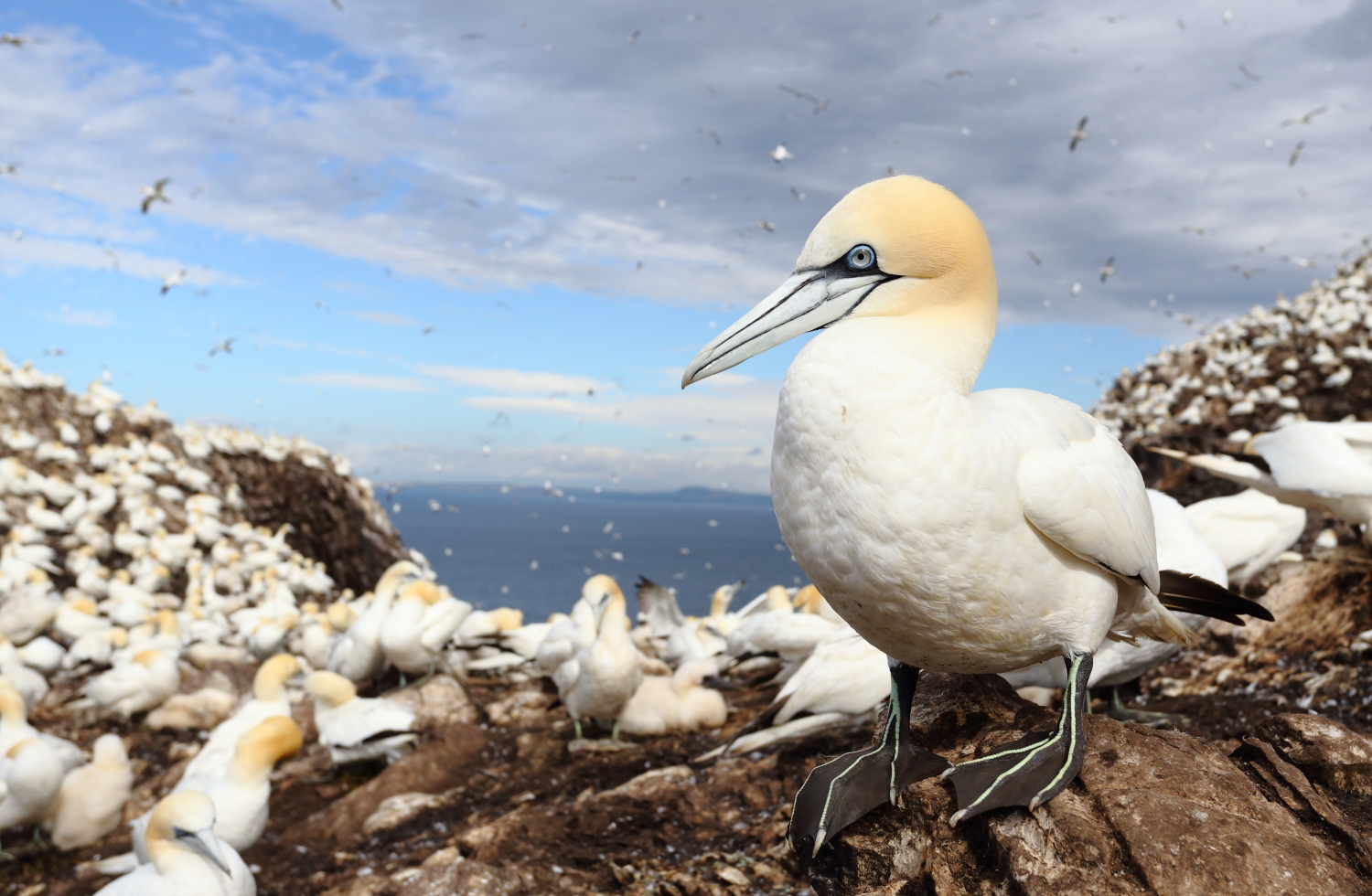 Although he started posting to BirdGuides only six months ago and has uploaded only around 100 images, bird photographer Mike McKenzie has already had half a dozen Notable Images and, now, three Photos of the Week. So what is the secret of his success? Firstly, he chooses his subjects wisely. Bird species are not all equal when it comes to their popularity as photographic subjects: most people prefer images of Puffin, Pintail, Bittern and Red Grouse to those of Guillemot, Wigeon, Grey Heron and partridges. Having chosen iconic/charismatic species and being prepared to travel to the most productive locations to photograph them, Mike then works hard to capture an image that will stand out from the crowd. In fact, this is doubly challenging for such heavily targeted species, but Mike's puffed-up Bittern and plunging Kingfisher prove it can be done. This week, Mike posted a range of images of the ever-popular Gannet taken at Bempton Cliffs and Bass Rock. Our pick of these is his wide-angle treatment of a single well-posed bird set amid the 'birdscape' of a bustling Gannet colony. The immersive shooting angle plus the inclusion of land, sea and sky create an evocative sense of 'being there'. This image doesn't just show us what the Gannet looks like: it shows us how it lives. 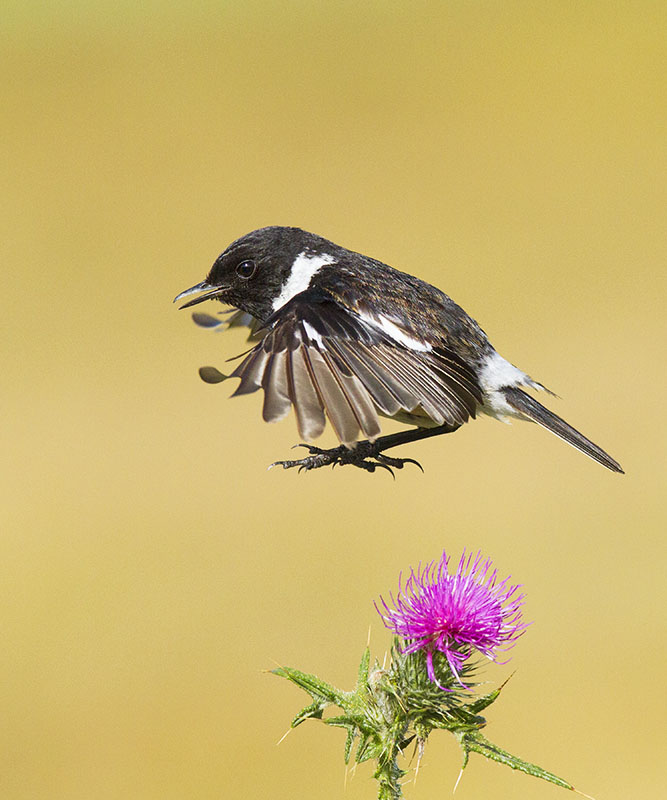 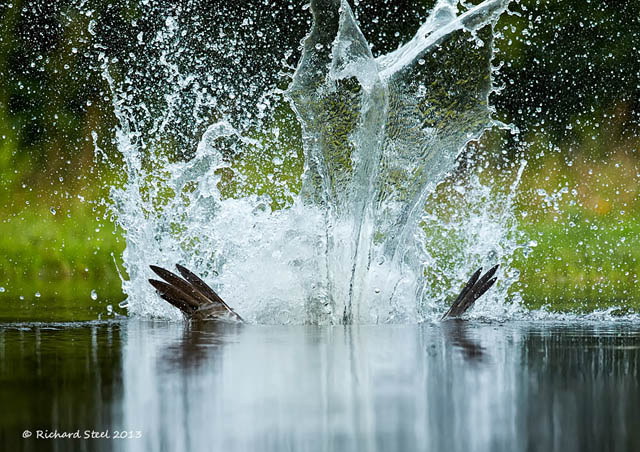 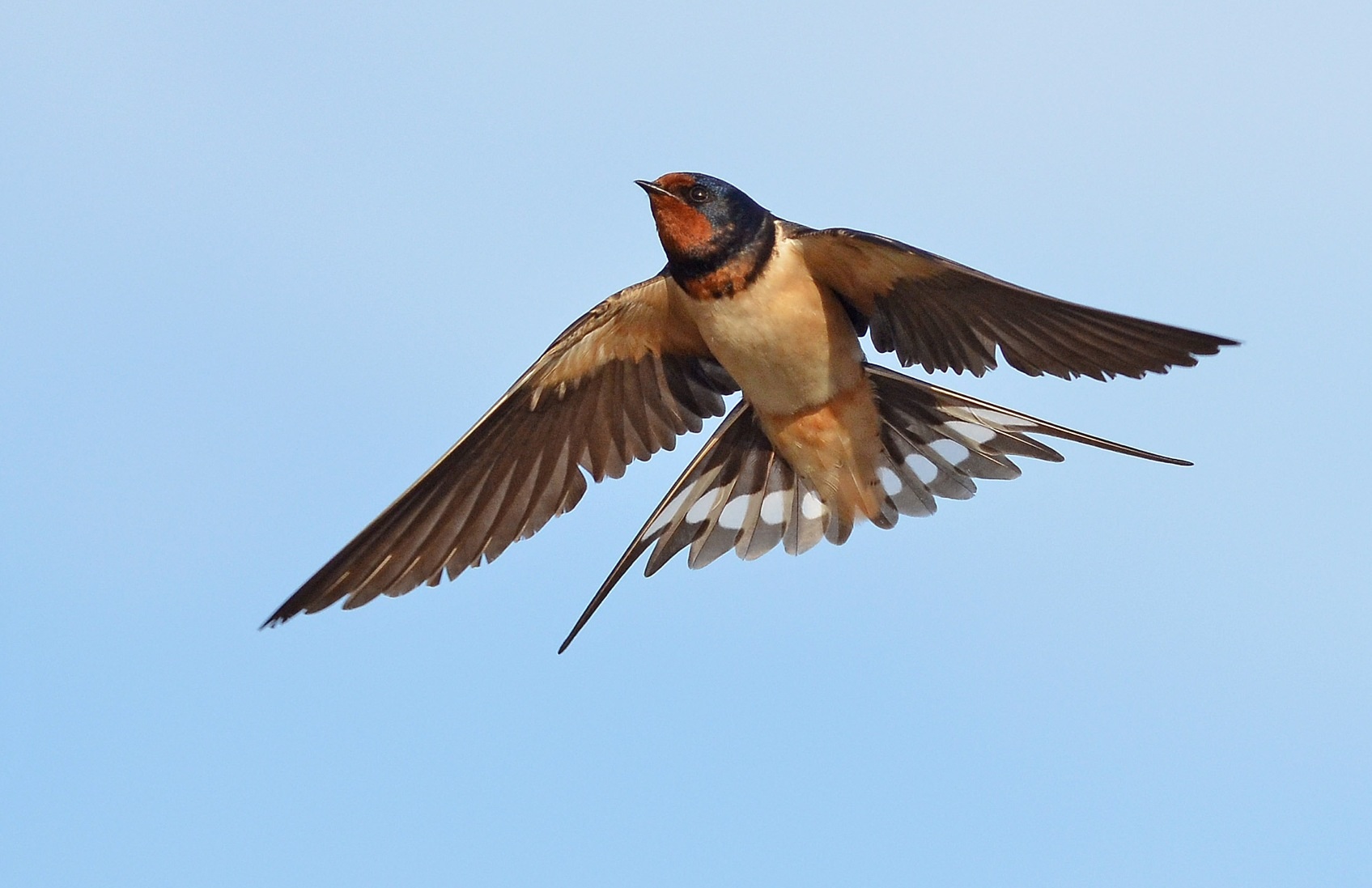 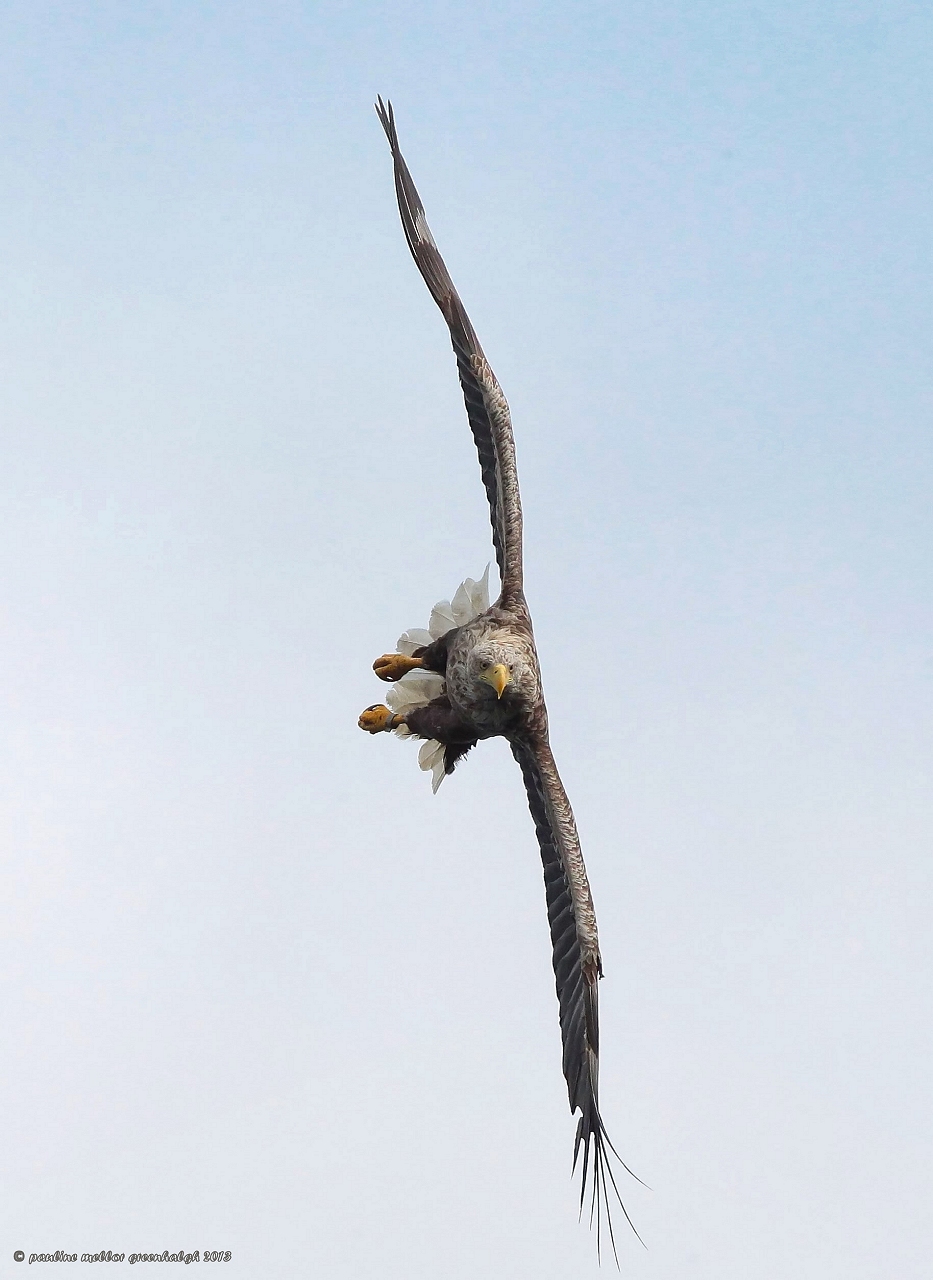 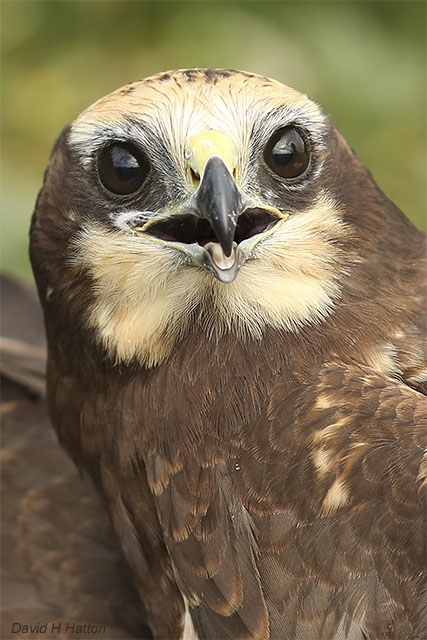 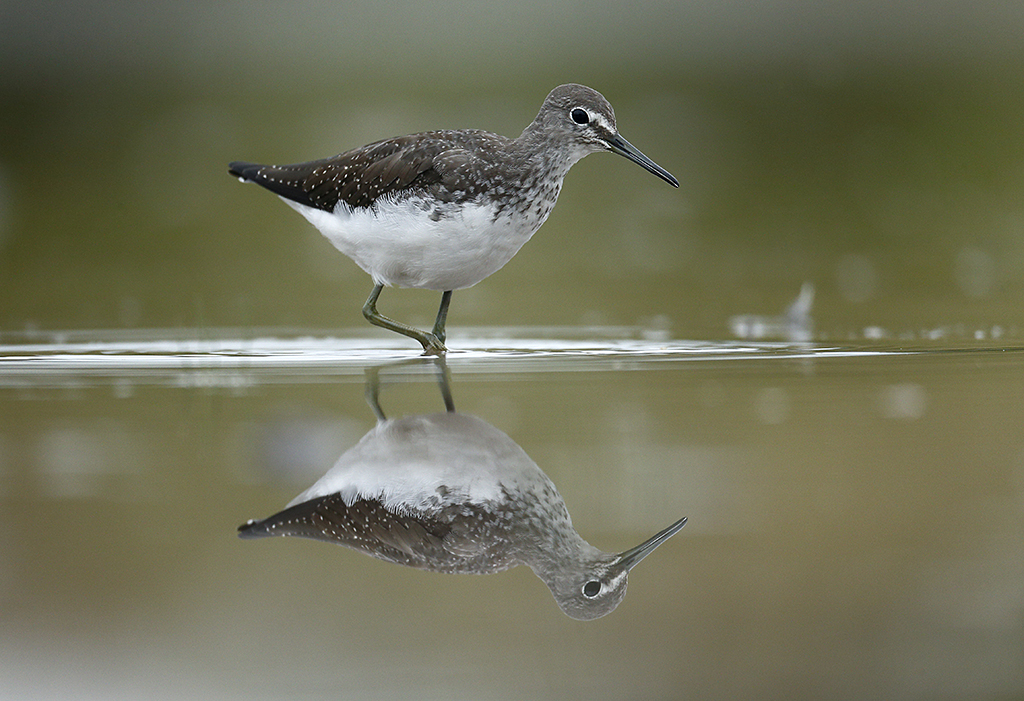 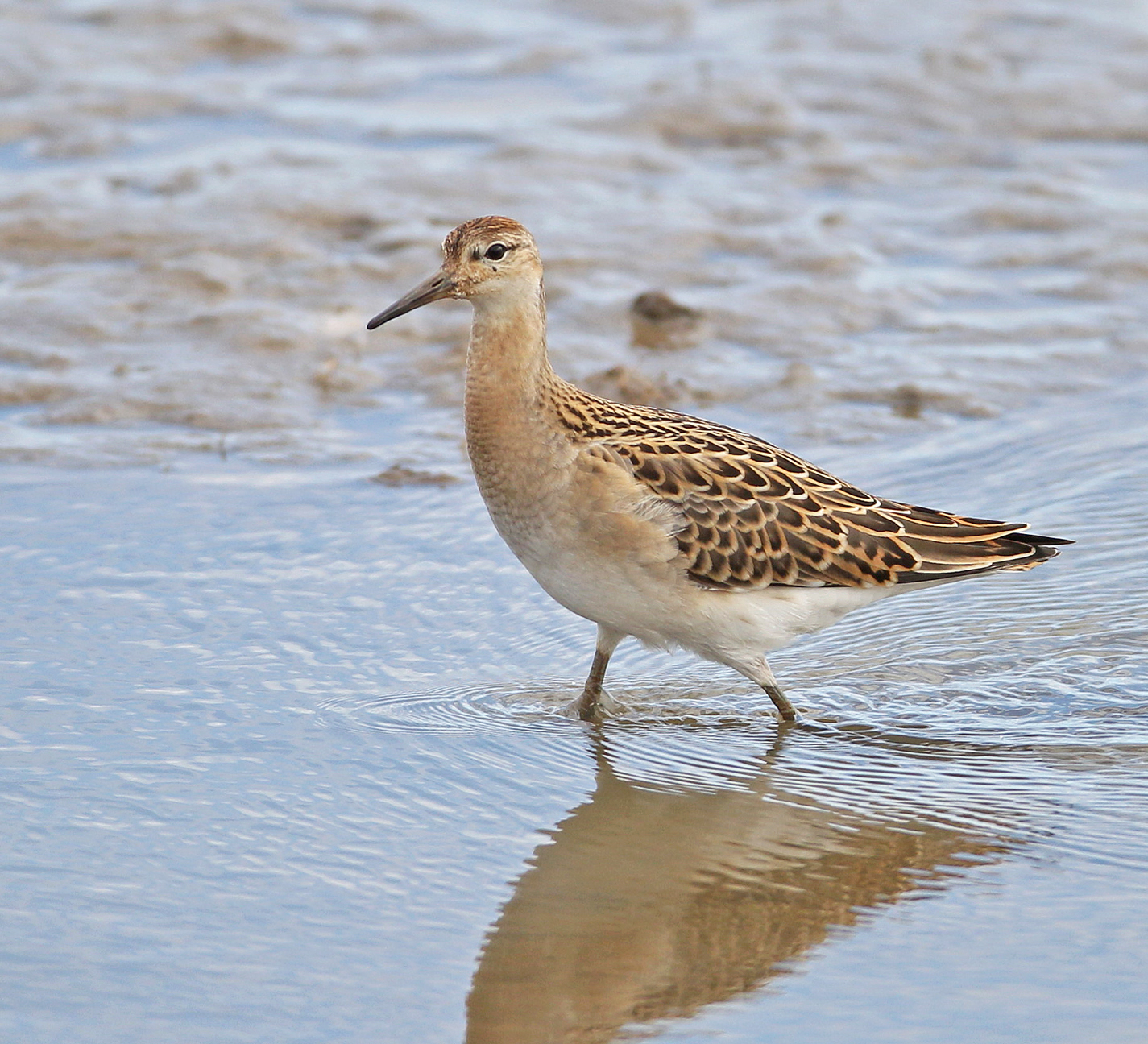 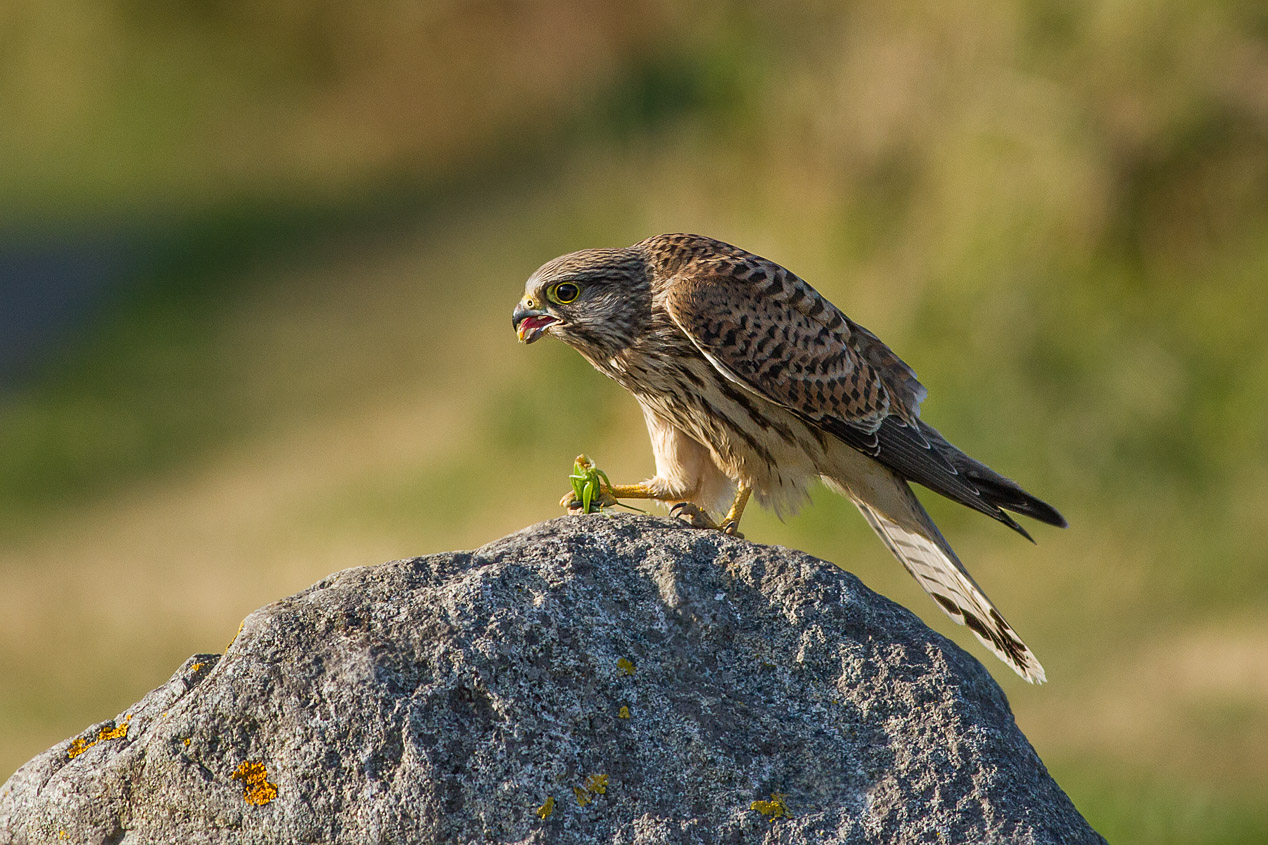 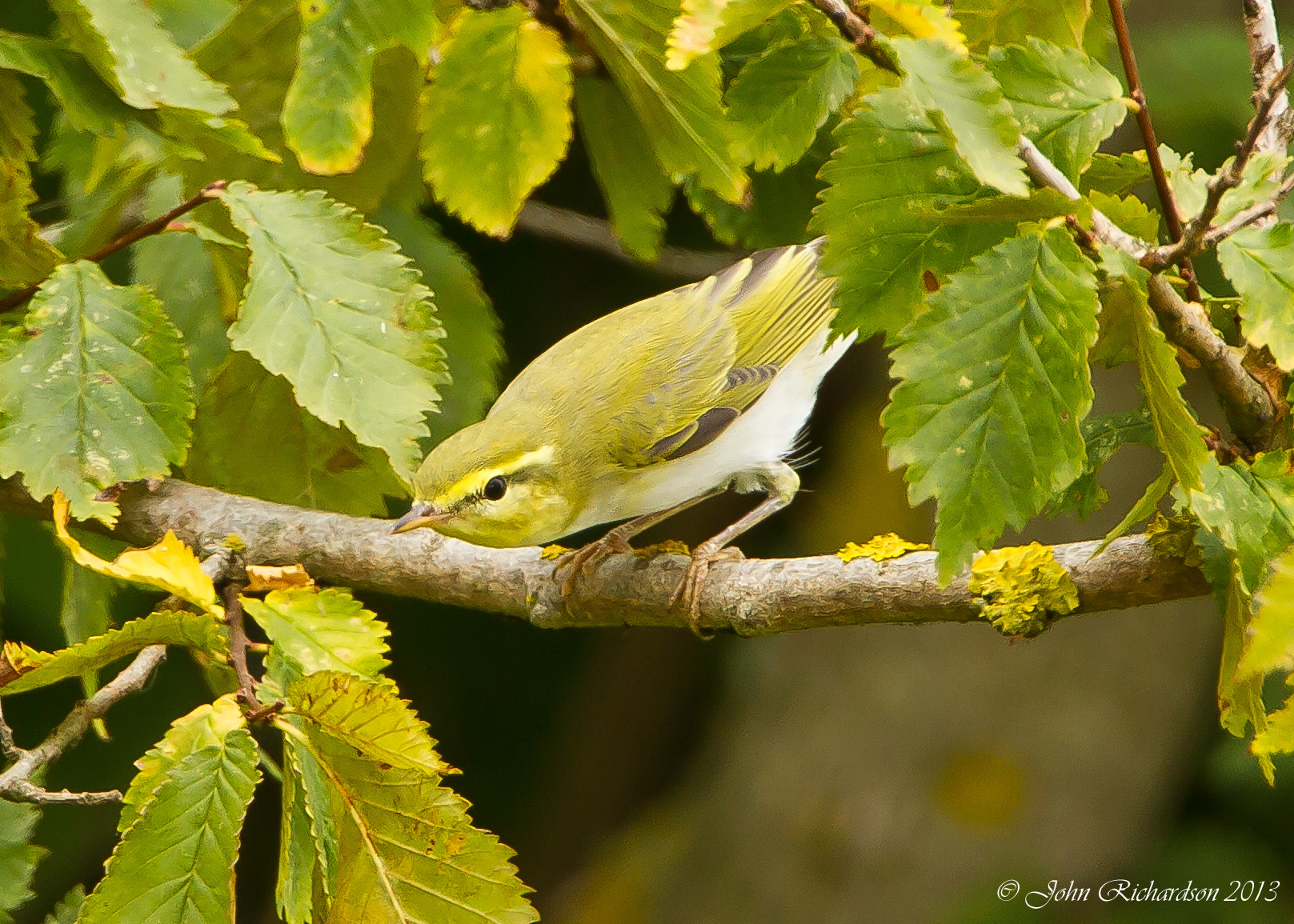 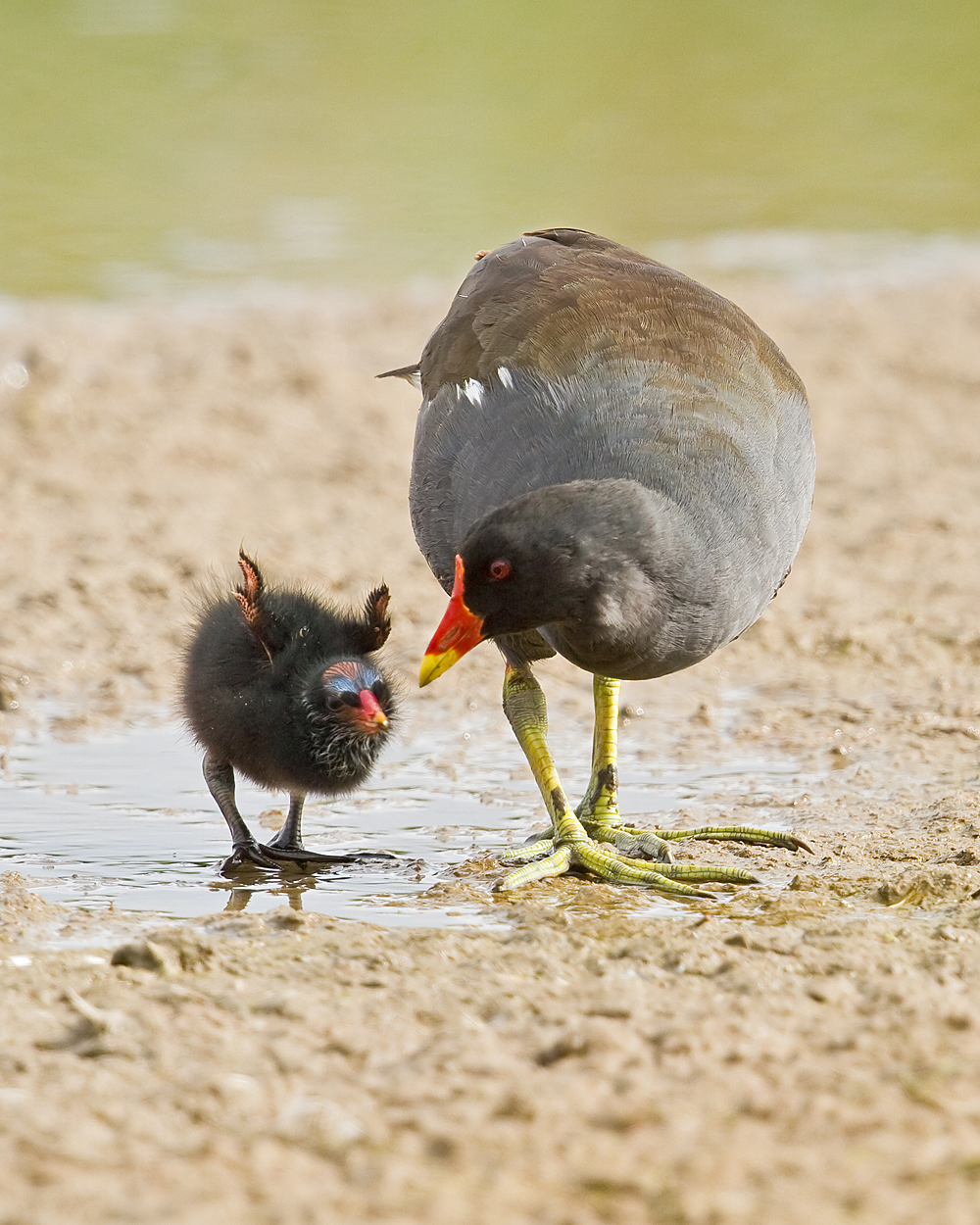