A particularly quiet period came to pass, and it seems that the 'December doldrums' have arrived early this year. In recent years, we've been treated to extended autumns that have produced top-quality birds well into November, even December – yet winter seems to have come quickly in 2017, and it's fair to say we were scraping the barrel somewhat for highlights this week.

Confirmed mega rarities were restricted to the continuing Pied-billed Grebe at Loch of Spiggie, Shetland, and the Pacific Diver roving Mount's Bay, Cornwall. Meanwhile, the chestnut-capped 'Italian Sparrow' continued to draw a steady stream of birders to East Budleigh, Devon, for an insurance tick. 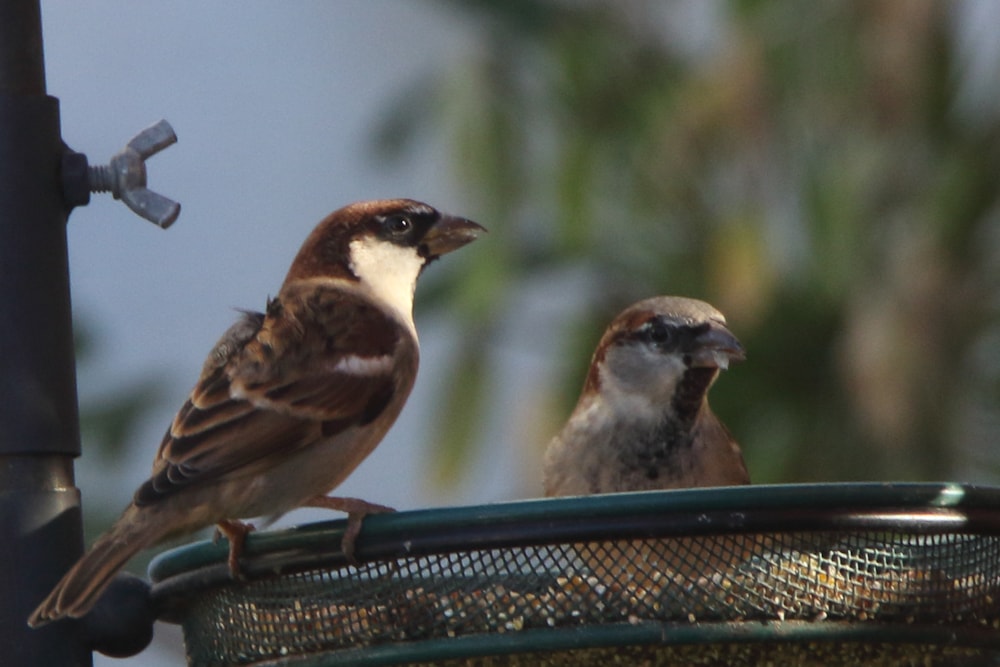 The drake Ferruginous Duck remained on show at Eyebrook Reservoir, Leics, this week, with the two drakes from the German reintroduction project also still at Dinton Pastures, Berks. A drake Lesser Scaup was found at Rahasane Turlough, Co Galway, on 15th, although another reported at Farmoor Reservoir, Oxon, later transpired to be a hybrid on the basis of its dark grey upperparts, clean, white flanks and incorrect upperwing pattern. Rahasane Turlough also hosted one of the week's eight Ring-necked Ducks. There were two new drakes in Highland (Acharacle and Loch Watten) and another new male at Blarney, Co Cork, in addition to continuing birds in Essex, Cornwall and Co Kerry (2). 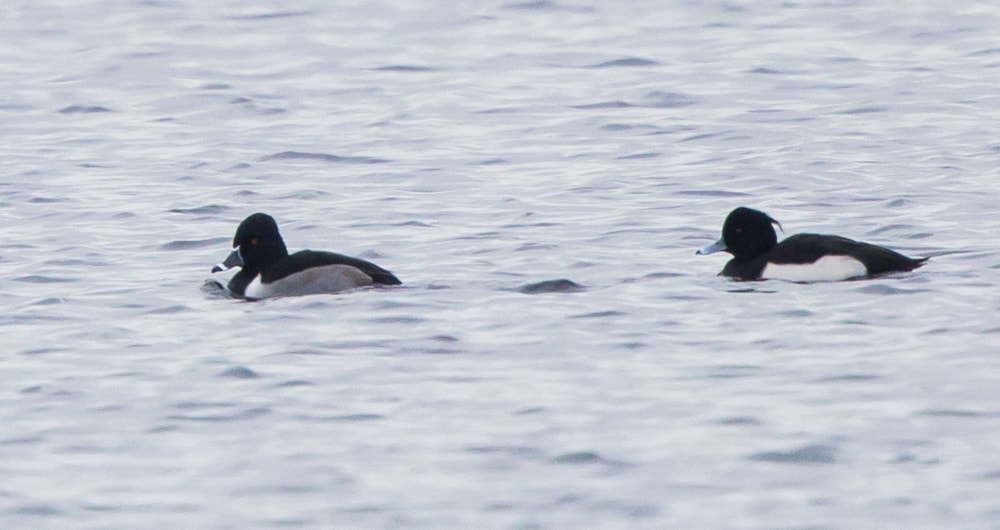 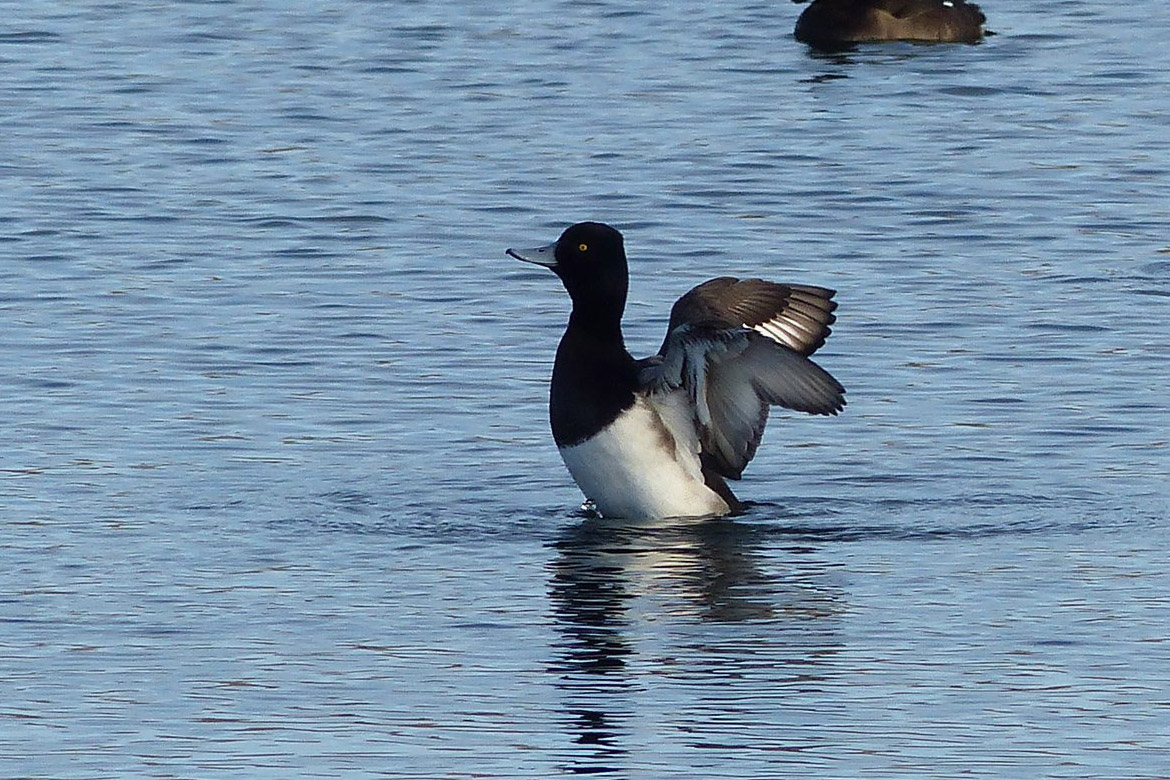 Ireland did well for Surf Scoters, with a drake north past Clogher Head, Co Louth, on 18th and others off Mullaghglass, Co Galway, and Gleninagh Quay, Co Clare. Long-stayers continued off the coasts of Fife and Lothian, with two also still off Porthpean, Cornwall. A female King Eider was new off Rough Point, Co Kerry, on 16th, with drakes still off Whiteness Head, Highland, and Wester Quarff, Shetland. The only White-billed Diver this week was one off Finavarra Point, Co Clare, on 16th.

A drake American Wigeon was found at Matford Marsh, Devon, on 21st, with a further five seen in Britain (three of which were in Scotland) and two in Ireland, these at Ardilea, Co Down, and Culdaff, Co Donegal (the latter a returning bird). There was a noticeable increase in Green-winged Teal, with the nine recorded including new birds at Oare Marshes, Kent, on 15th, Roadford Reservoir, Devon, on 19th and two in Lancashire. 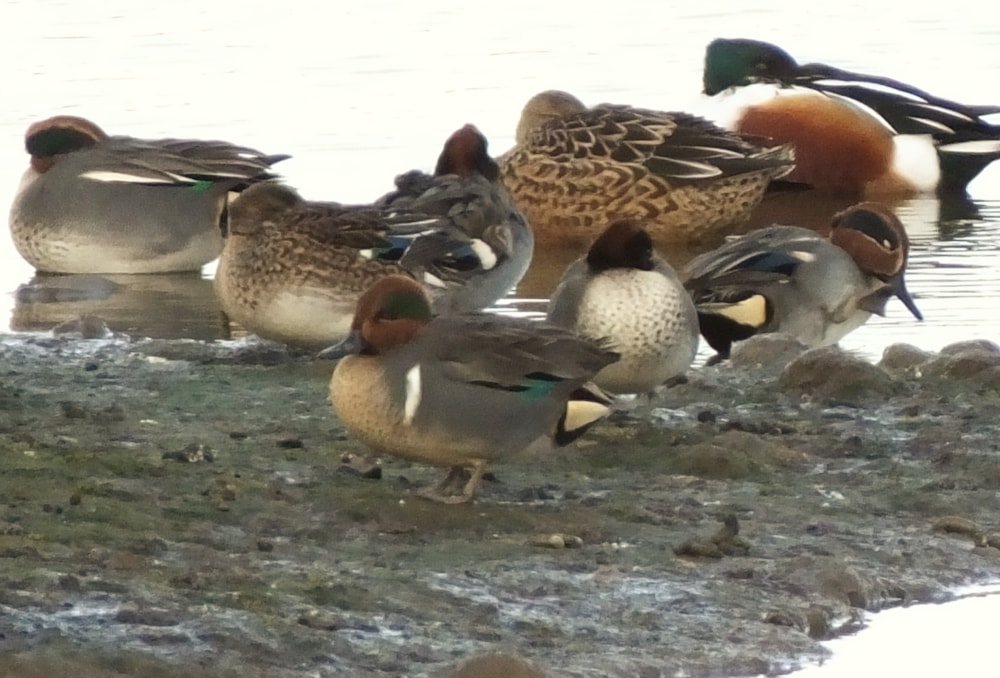 The Richardson's Cackling Goose was again at Gretna, Dumfries & Galloway, on 16th, with one also reported from Islay, Argyll, on 15th. It seems the two blue-morph Snow Geese have split up for now, with one back at Loch of Skene, Aberdeenshire, on 17th and presumably the other at Gellybank, Kinross, the following day. Elsewhere, the white morph stayed on Berneray, Outer Hebrides. Black Brants were in Dorset, Essex and Norfolk. With mild conditions and not a sniff of an easterly airflow for weeks, Tundra Bean Geese remain almost non-existent, with three at Wykeham Lakes, North Yorks, on 20th and singles in Highland and Aberdeenshire.

A Glossy Ibis was new at Medmerry, West Sussex, from 15th, as were birds at Kingsmill Lake, Cornwall, on 16-17th, Saltholme, Cleveland, on 18th and Sopley, Hants, and Frampton Marsh, Lincs, on 19th. Others were in Co Wexford and on the Isle of Wight. Western Cattle Egrets were widespread in southern counties, with a handful in Co Wexford, groups of five and three in Lancashire and one at Wykeham Lakes. An amazing 34 roosted at Shapwick Heath, Somerset, on 17th. Up to 16 Great Egrets were at Rutland Water, with up to 30 in the Chew Valley and Blagdon Lakes area. As the map below reveals, they're very much part of the furniture in the southern half of Britain these days. 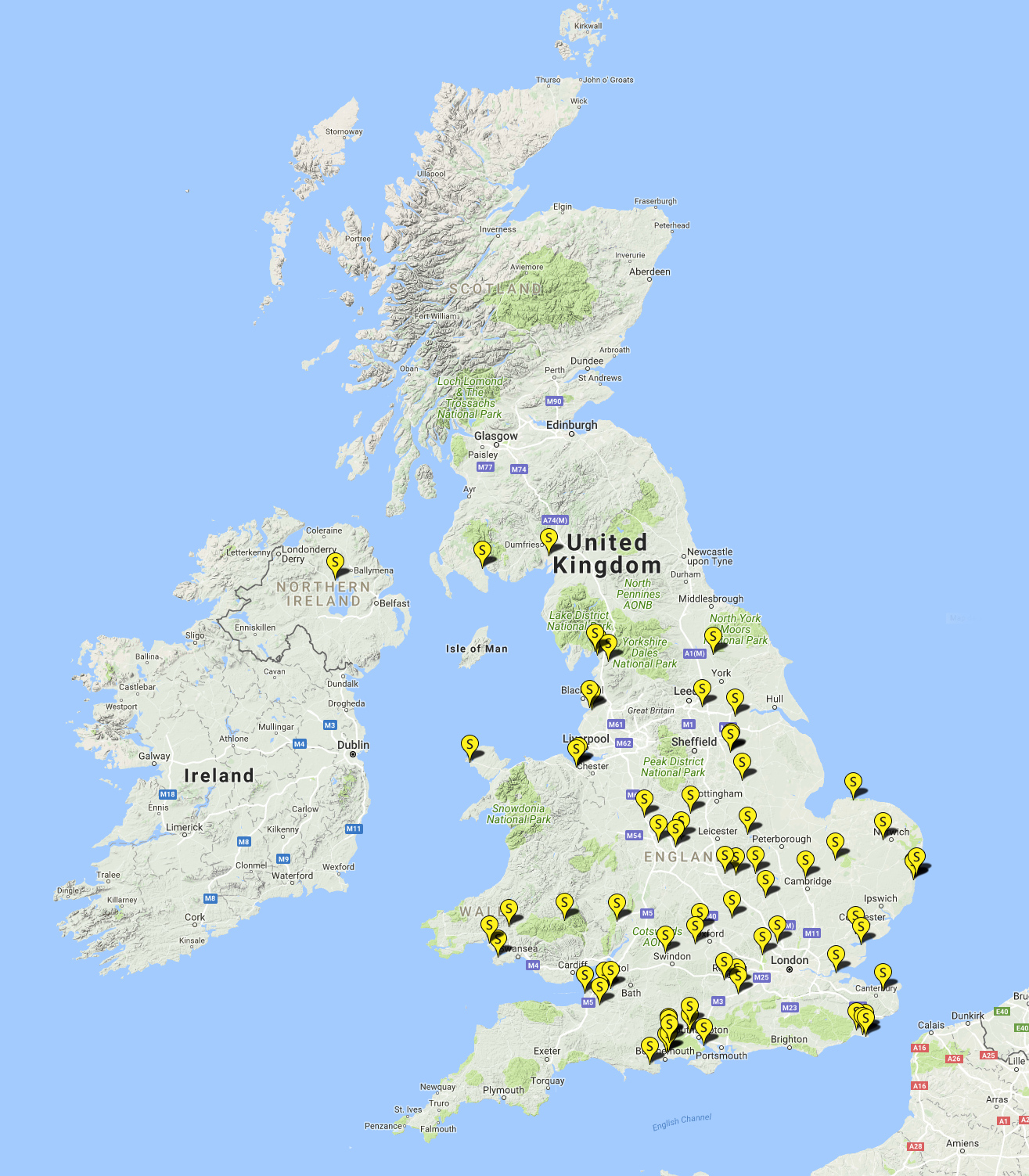 A Rough-legged Buzzard was at Flitcham, Norfolk, on 11th, with another well watched between Bempton and Buckton, East Yorks, on 18-19th. The Snowy Owl was again reported from Eday, Orkney, on 18th – the first record of it anywhere since it was seen on Westray in June.

The Forster's Tern was still hanging out on the south side of Galway Bay this week, last being noted at Kinvarra on 18th. The usual Bonaparte's Gull was still at the Exe Estuary mouth, Devon, this week, while an adult at Largs, Ayrshire, on 17th is presumably last winter's bird returning. Radipole Lake, Dorset, enjoyed a good week with an adult Ring-billed Gull on 18th followed by Caspian Gull 'X594' on 20th, the latter having already been in northern France and at Dungeness, Kent, so far this autumn. Iceland Gull numbers increased and in excess of 30 were reported this week, with Glaucous Gulls at a similar level. One of the latter, a second-winter on Barra, Outer Hebrides, was wearing a yellow darvic and transpired to have been ringed in Copenhagen, Denmark, on 25 February 2017 – quite an impressive recovery. 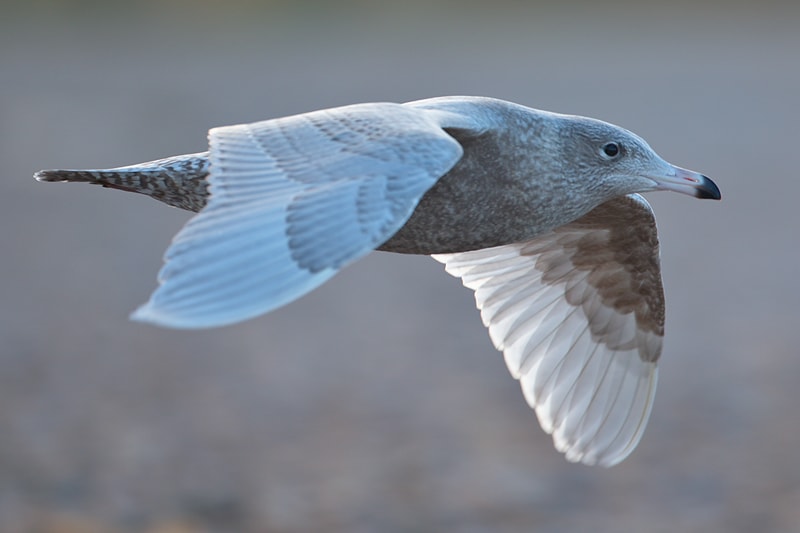 New American Golden Plovers were at The Cull, Co Wexford, on 15th, Lough Gara, Co Sligo, on 18-19th and on the Hayle Estuary, Cornwall, on 21st; others remained on both North Uist and South Uist. Present for another week, the Lesser Yellowlegs could well be settling down for the winter at Lodmoor, Dorset; another remained at Tacumshin, Co Wexford, to 15th. Tacumshin also held onto two Long-billed Dowitchers, and the adult stayed on at Oare Marshes, Kent. Juvenile Red-necked Phalaropes showed well at Pegwell Bay, Kent, on 16-17th and at Covenham Reservoir, Lincs, throughout. The week's only Grey Phalaropes were fly-bys on North Sea coasts. 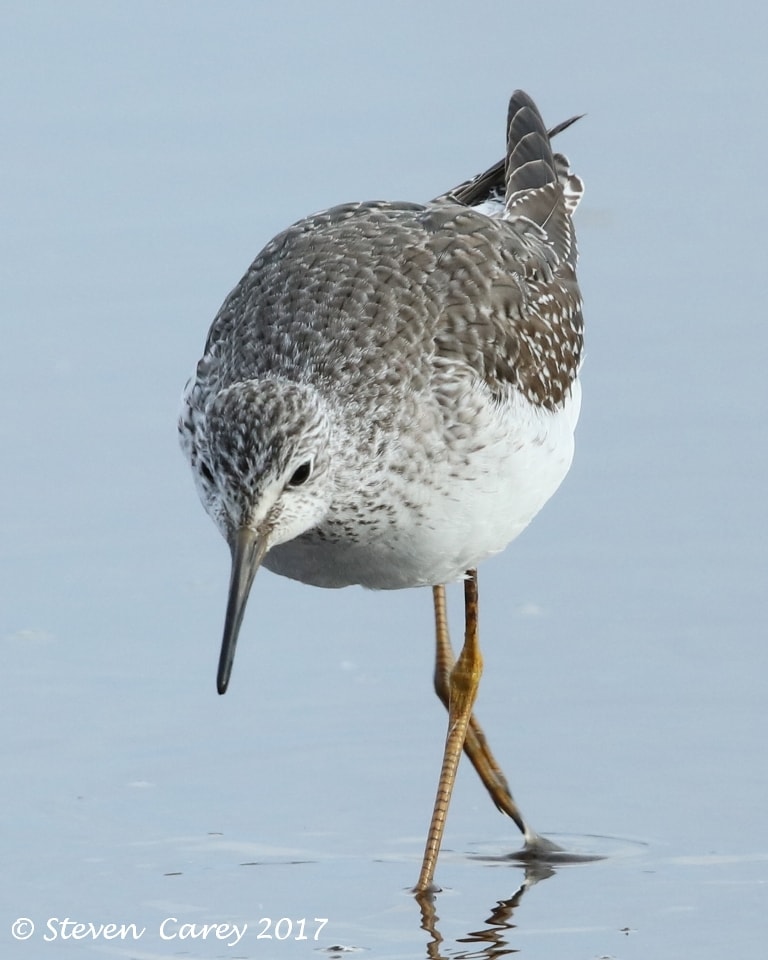 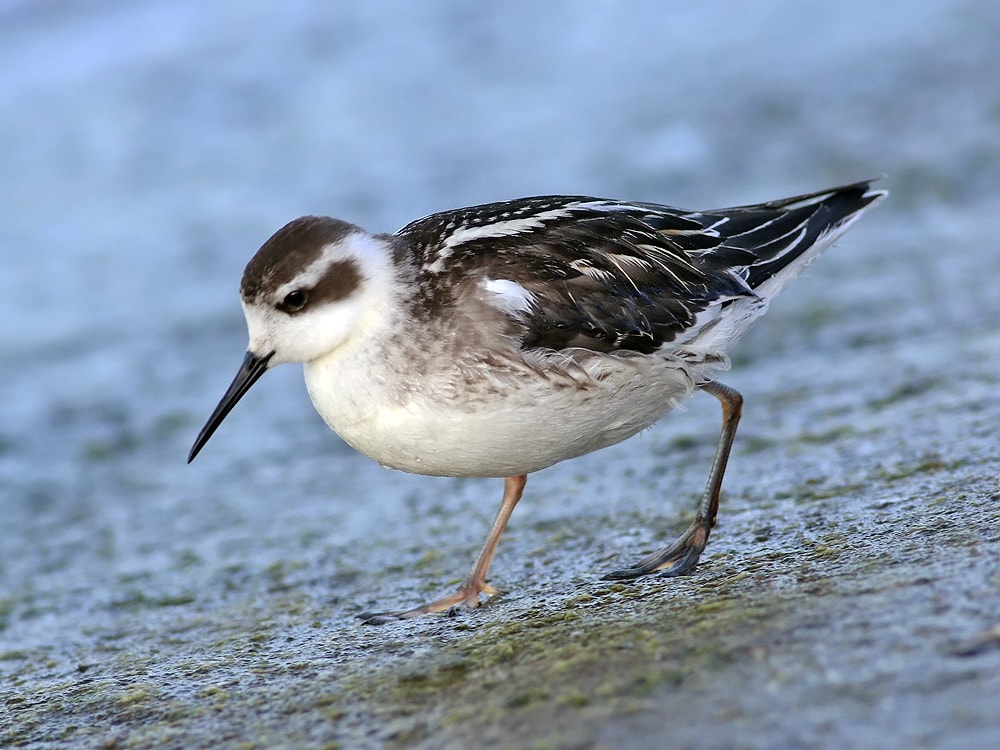 A first-winter male Siberian Stonechat was on private land at Halstow Marshes, Kent, on 19th, although it's not entirely clear whether it's a maurus or stejnegeri. 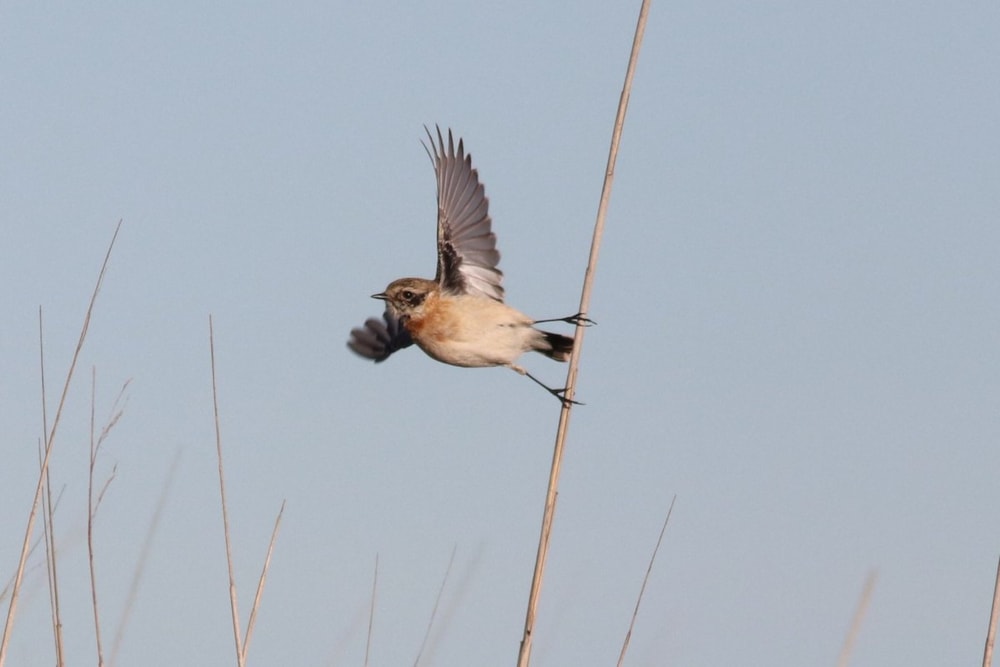 A Dusky Warbler showed on St Mary's, Scilly, from 18th, with another found at Sennen, Cornwall, the following day. A Radde's Warbler was trapped on the outskirts of Weymouth, Dorset, on 20th. Pallas's Warblers were at Portland, Dorset, on 18th and Sandwich Bay, Kent, on 19th. A Barred Warbler was found crashing around in a thicket at Titchfield Haven, Hants, on 19th, with another still at Spurn, East Yorks, to 16th. 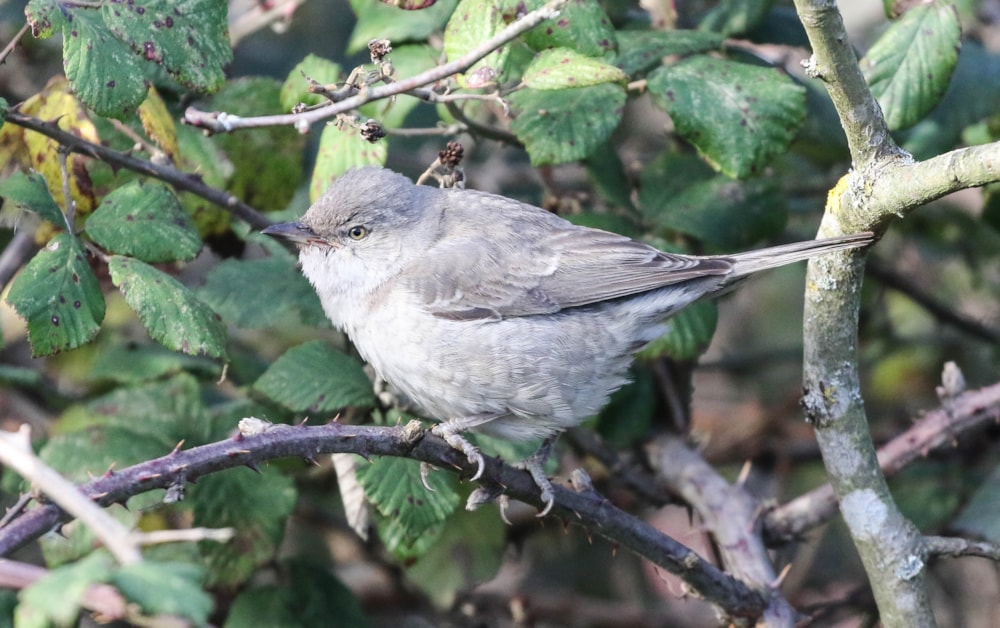 Perhaps the most striking record of the week was a late Ortolan Bunting, present in fields at Martinstown, Dorset, from 15-19th, although the Wryneck at Cot Valley, Cornwall, on 15th and 20th seemed similarly out of place as December draws near. Not far away from the Wryneck, a Little Bunting remained at Polgiggia on 16th, with another in the county at Lizard Point from 17-19th.

Polgigga also scored a Greater Short-toed Lark on 17th. Richard's Pipits flew over Weybourne, Norfolk, and Cot Valley, Cornwall, with two on the deck at Thornwick Bay, East Yorks, on 21st. There were reports of Hoopoes in Dorset, Leicestershire and Co Tipperary.

A very light scattering of Waxwing reports, many of which involved fly-overs at east coast localities, suggested that there might yet still be a small influx of these popular birds this winter. There was a report of 80+ in Edinburgh on 21st but occurrences were otherwise limited to singles and groups of up to five. Shore Larks were reported from a respectable dozen east coast sites between Cleveland and Kent, with up to 16 still at Happisburgh, Norfolk. The exception was a brief inland record from Staines Reservoirs, Surrey, on 19th.

Hawfinch reports remained on a par with last week, with the total number of reports actually jumping slightly to 450 in the seven days. Sizeable counts included 70+ at Rewell Wood, West Sussex, and up to 40 at Great Hampden, Buckinghamshire. To explore the week's records in full, click on the map below (subscribers only). 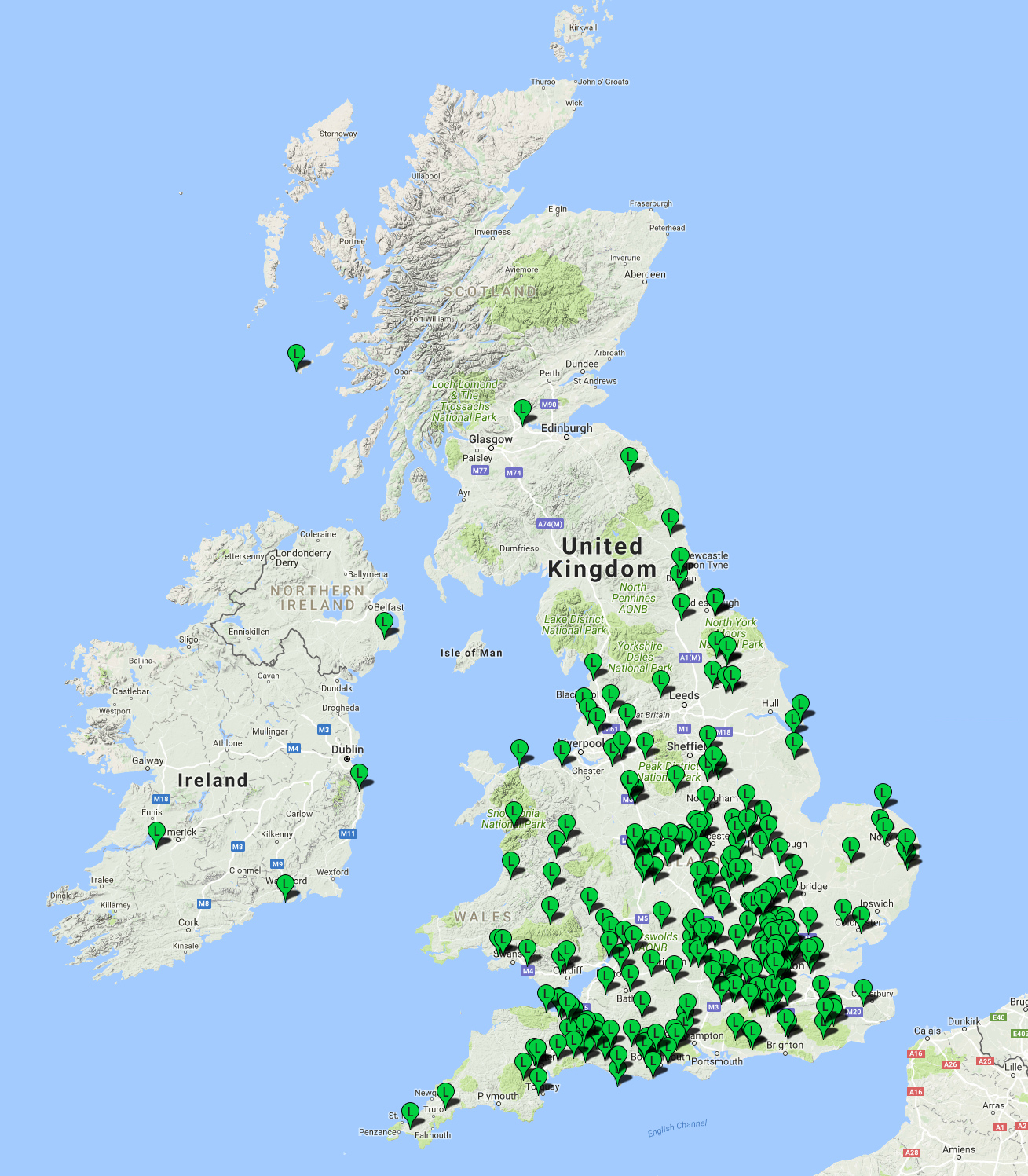 Headline bird around the region this week was the confirmation of the White-winged Crossbill at Seltjörn, Iceland – a first for the Western Palearctic. It was still present on 19th, having disappeared for a couple of days earlier in the review period. Also in Iceland, the drake American White-winged Scoter returned to Keflavík. 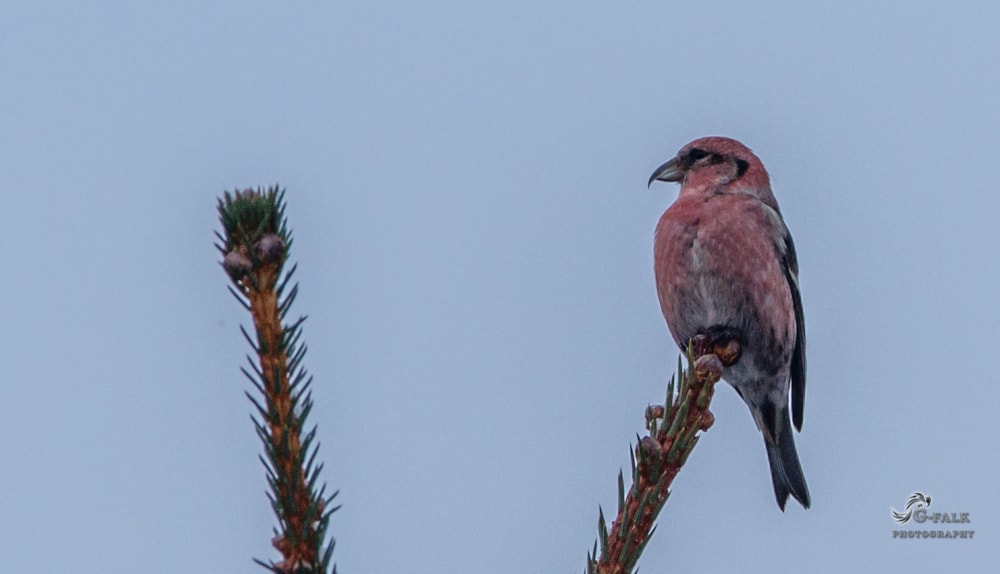 At the opposite corner of the region, the WP's third Purple Sunbird was found at Mutla'a Ranch, Kuwait, on 17th, but it only lingered until early the next day as the tap it was drinking from was switched off. 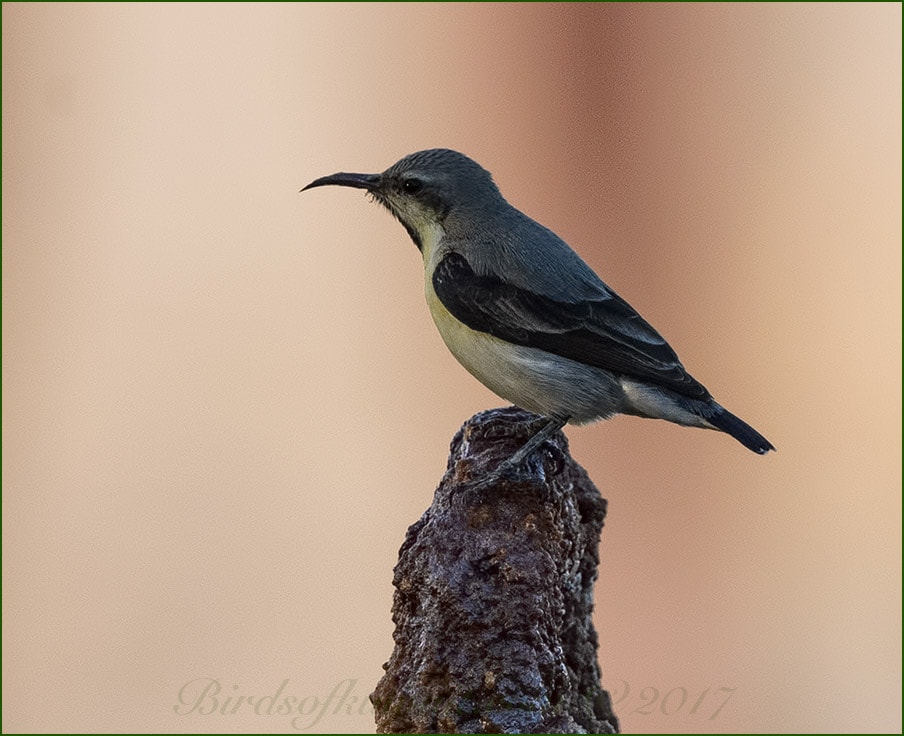 The first Reed Cormorant for Macaronesia was found at Pedra Badejo, Santiago, Cape Verde, on 17th, with a Black Heron also there. On São Vicente, both Intermediate Egret and Wilson's Snipe were recorded at Mindelo sewage works. 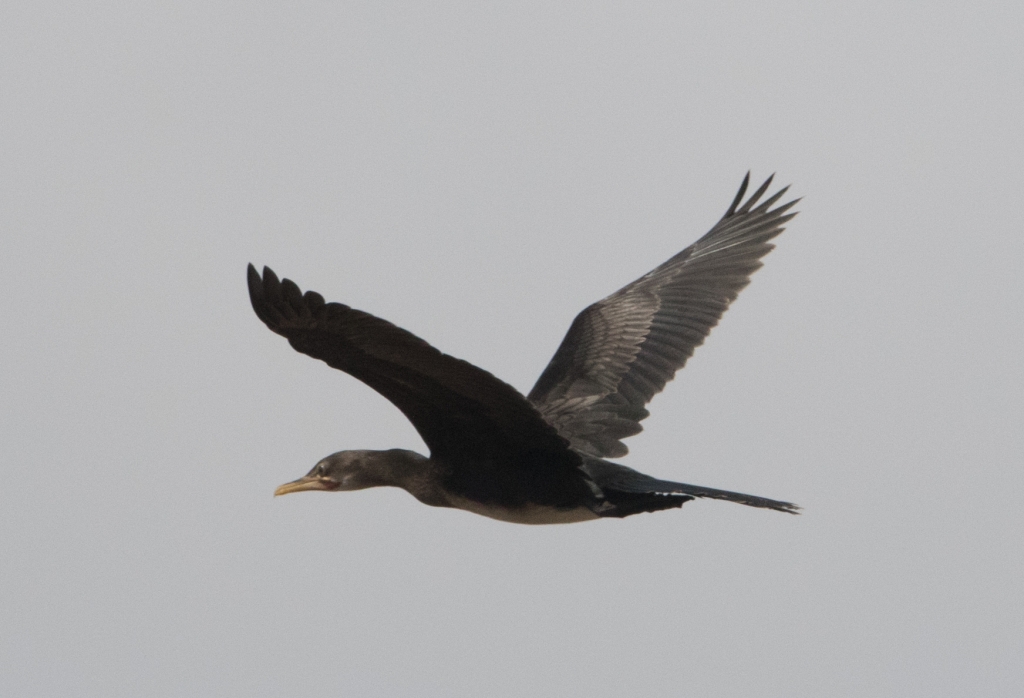 Other odds and sods included the continuing Brown Shrike on Malta, the first Red-flanked Bluetail for the Balearics at Bunyola, Mallorca, on 18th and, in the Azores, the Redhead still on Terceira and Snowy Egret still on Faial. A Franklin's Gull was at Cap du Cap Coz, Finistère, on 15-16th. 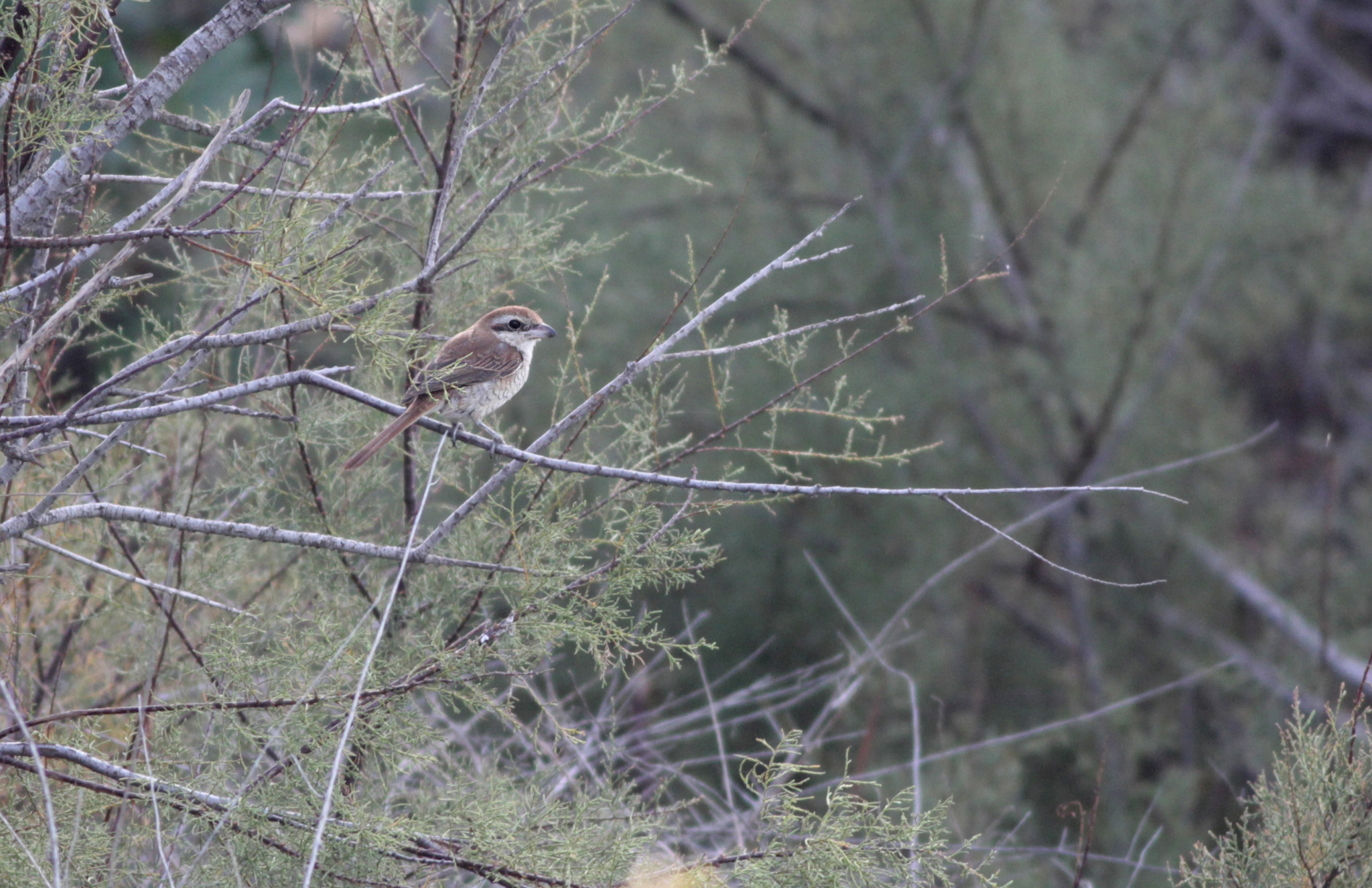