By the time the latter half of November rolls around, thoughts have usually turned to hopes of a 'Waxwing winter' and perhaps a Little Auk or two. As it transpired, both of those species were on the agenda this week, with Little Auks in particular ubiquitous in the North Sea.

Prevailing westerlies can, however, deliver a surprise or two, perhaps a late Nearctic wader or a mini-influx of wildfowl. A Killdeer is perhaps what most people were hoping for, with four on record for this week in past years. Nonetheless, few would have expected the review period's star find: Britain's fourth Purple Gallinule, which was photographed at a building site at Dunster Beach, Somerset, on 16th. Unfortunately, news didn't emerge until the hours of darkness and the bird couldn't be relocated despite best efforts the following morning. Another Nearctic delight was the first-winter Grey-cheeked Thrush under bird feeders at East Coast NR, Co Wicklow, on the same date. 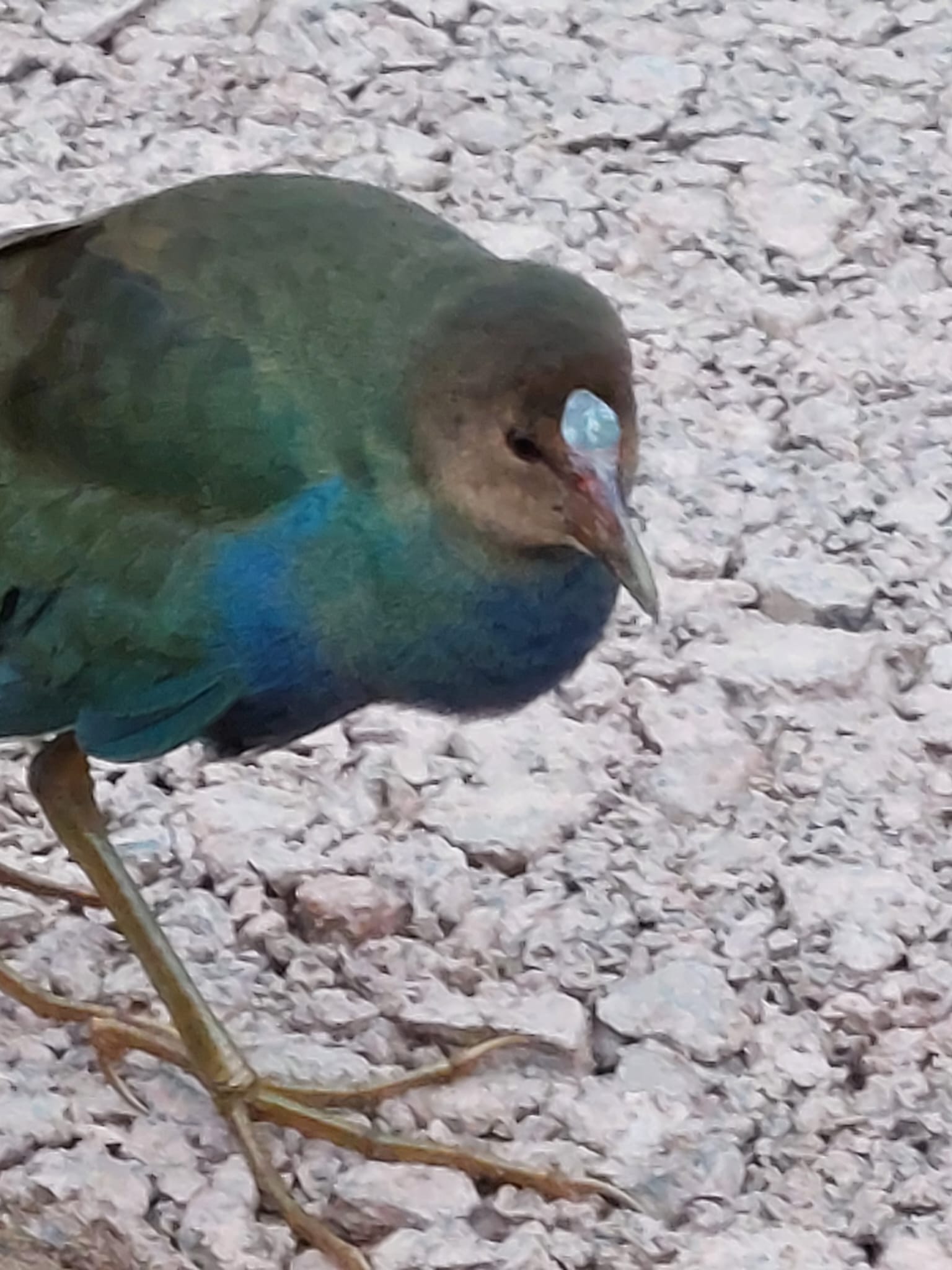 Cornwall boasted a surprise East Asian mega during a late spell of easterlies over the weekend. Ringers at the incomparable Nanjizal Valley rejoiced at the discovery of a first-winter Black-faced Bunting in a mistnet there on 19th, following on from a Greater Short-toed Lark and Little Bunting earlier in the week. Unfortunately, despite its release from a neighbouring public footpath, there was no further sign. It is just the eighth on record for Britain and the first for Cornwall, although is predated by another record in south-west England – on Lundy, Devon, in October 2001. Gwent was the beneficiary of a female Desert Wheatear at Goldcliff Pools NR on 18th, although this county second proved unfortunately brief. It is tempting to speculate that the female found at Pendennis Point, Cornwall, the following day relates to the same bird, although it would be impossible to say for certain. Equally brief was an Isabelline Wheatear at Filey, North Yorkshire, on 15th, while others lingered at both Uwchmynydd, Gwynedd, and Toe Head, Co Cork. Other late autumn vagrants included an Olive-backed Pipit which overflew Lundy, Devon, a Wryneck at Portland, Dorset, and a Rosy Starling in Cornwall, while a Red-flanked Bluetail persisted on St Mary's, Scilly. Eight Pallas's Warblers were found – including one in Ireland at Hook Head, Co Wexford – and a presumed Siberian Lesser Whitethroat remained on Tiree, Argyll. A decent Richard's Pipit showing produced seven birds, most popular of all being one at Hempsted, Gloucestershire. Shore Larks were at Spurn, East Yorkshire, and along the North Norfolk coast. Four Great Grey Shrikes appeared settled – on the Clwyd-Conwy border and in Kent, Surrey and Hampshire – while a Red-backed Shrike was reported from Cornwall. Three Eurasian Penduline Tits dropped in at West Rise Marsh, East Sussex. A tame Hoopoe on a housing estate at Lympne, Kent, was unsurprisingly popular, with another photographed by the River Severn at Apperley, Gloucestershire. Elsewhere, a Common Rosefinch visited feeders at Bornish on South Uist, Outer Hebrides, from 15th and a Hornemann's Arctic Redpoll remained on North Ronaldsay, Orkney. In Co Wexford, a European Serin was at Hook Head on 14th, with another trapped and ringed in Suffolk. With the southerly winds replaced by easterlies, temperatures dropped away and the recent influx of Pallid Swifts drew towards a close. Just three confirmed birds were recorded during the review period – at Mablethorpe, Lincolnshire, Swanage, Dorset, and Portknockie, Moray and Nairn – with another seven probables. A likely Red-rumped Swallow was photographed at Gifford, Lothian, while at least two remained in Kent. Despite plenty of talk for some weeks now of this winter looking like a big one for Waxwings, the large numbers in southern Scandinavia had not yet translated to sizeable flocks on this side of the North Sea. However, this week's easterlies definitely stirred the pot a bit, and while numbers are still lagging significantly behind some of the biggest Waxwing influxes, evidently plenty have arrived in recent days. In total, there were 126 Waxwing reports on the BirdGuides sightings page between 14 and 20 November, compared to just 56 in the seven days previous.

A first-winter Ross's Gull proved unfortunately brief amid a movement of Kittiwakes at Loch of Spiggie, Mainland Shetland, on 18th. Kittiwakes were seen at numerous inland sites, as were Little Gulls, with a few decent-sized flocks of the latter seen inland over the weekend and some impressive three- and four-figure counts off the east coast (not least the 5,980 past Sheringham on 17th). Meanwhile, it was another good week for Sabine's Gull records, with the bulk along the east coast between Norfolk and Northumberland. Most notable were a regularly roosting juvenile inland at Amwell NR, Hertfordshire, and at least five at Chesil Cove, Dorset. Stormy weather in the North Sea produced a solid showing of Little Auks from Shetland south to Kent, with several day counts reaching three figures. Inland, one taken into care in a Worksop garden is the first Nottinghamshire record since 1995, while there were a couple of inland birds in Lincolnshire too. Three Cornish sites saw single-figure counts of Great Shearwater, with similarly small tallies of Leach's Storm Petrel and Long-tailed Skua noted elsewhere. Otherwise, a Bonaparte's Gull was again at Stag Rocks, Northumberland, and a Ring-billed Gull was at Lurgan Green, Co Louth. A new juvenile Pallid Harrier spent the week wandering fields just inland of Trevescan, Cornwall, with the Norfolk juvenile favouring the saltmarsh off Warham Greens. Rough-legged Buzzards were reported from North Yorkshire and Suffolk; wayward Common Cranes were in Nottinghamshire and Lancashire.

An extraordinary run of Ferruginous Duck came from the Norfolk Broads, with no fewer than three – an adult drake and two adult females – arriving at Filby Broad with returning Common Pochard from 13th. The impressive congregation of Aythya there also included three Ferruginous Duck × Common Pochard hybrids and two Ring-necked Duck – providing a real treat for local birders. Elsewhere, a female Ferruginous Duck continued at Inch Island Lake, Co Donegal. A new Lesser Scaup was discovered on Tiree, Argyll, on 17th, with others still on South Uist, Outer Hebrides, and at Dunfanaghy New Lake, Co Donegal. More curious was a one-day Ruddy Duck at Wexford Wildfowl Reserve, Co Wexford, on 18th, while Ring-necked Duck were at no fewer than 17 sites. Three American Wigeon included new drakes at Blunham, Bedfordshire, and Lough Gur, Co Limerick, Another remained at Meare Heath, Somerset, while the Blue-winged Teal at Halton Marshes, Lincolnshire, and drake American Black Duck at Cross Lough, Co Mayo, both hung on. Seven Green-winged Teal were noted and King Eider were in Shetland and Lothian, with a Black Scoter still off the Northumberland coast.

Richardson's Cackling Geese continued with Barnacle Geese on North Uist, Outer Hebrides (two), and at Lissadell, Co Sligo. Four Todd's Canada Geese remained on Tiree, Argyll, with two Snow Geese still at Aghernagallagh, Co Mayo. Two Taiga Bean Geese provided a treat for Shetlanders near Spiggie, Mainland, while numbers at Slamannan, Forth, increased to a minimum of 172. Five Black Brant were spread across southern and eastern portions of England, with at least two in Norfolk. Germany's Red-breasted Nuthatch racked up another week at Tönsheider Wald, while the Western Olivaceous Warbler on Heligoland was joined by a Desert Wheatear and Hume's Leaf Warbler. The Swiss Common Yellowthroat remained at Magadino. Oriental Turtle Doves comprised two in Finland and one in Sweden, while a Black-throated Thrush flew south-west over Falsterbo, Sweden, and a Black Scoter was still at Tisvilde Hegn, Denmark.

Some three Stejneger's Scoter in Poland became the country's third, fourth and fifth records. The regular Ring-billed Gull returned to Siedliska, while a Slovenian surprise produced a female Siberian Rubythroat in a Predgriže garden on 19th – the country's second. Bulgaria's third Desert Wheatear visited Durankulak, with the Sandhill Crane still at Balmazújváros, Hungary.

An imposing male Walrus cut an impressive figure in The Netherlands at Roggenplaat on 13th, before relocating to Dieppe, France, on 19th. Texel, The Netherlands, hosted a Eurasian Crag Martin on the same date, while both the French Northern Harrier and Belgian White-headed Duck continued. Two Lesser Flamingos were again in the Camargue, France; another was in Spain at Laguna del Camino de Villafranca. Terceira was the focus of the week's Azorean action, with a fresh-in Common Yellowthroat and American Coot alongside Blue-winged Teal, Least Sandpiper, Semipalmated Sandpiper and two Semipalmated Plovers. The lingering Wood Duck was at Lagoa Azul, São Miguel. Meanwhile, in Cape Verde, the Greater Yellowlegs was still on Sal.

In Israel, an adult Verreaux's Eagle was again in the Eilat Mountains at Nahal Atek, with double figures of Swinhoe's Storm Petrels still off Eilat. A young Lesser White-fronted Goose at Hurghada, Egypt, from 9th becomes the nation's first modern-day record.