Under French rule until the 1960s, Algeria has long remained off-limits to outsiders, thanks largely to a bloody civil war which lasted from 1991-2002. It's of particular interest to world listers due to the presence of Algerian Nuthatch, the countries' only endemic and discovered as recently as 1975. The tantalising presence of introduced Red-billed Firefinches in the south, as well as sporadic reports of African Silverbills have – until very recently – remained off the radar of Western Palearctic listers.

One of the more intriguing species to be found in the Collins Bird Guide is Red-billed Firefinch. Resident in most of Sub-Saharan Africa, it is incredibly widely distributed with an estimated global extent of 10,000,000 km². However, within the Western Palearctic it can only be found in Algeria, where there are a number of self-sustaining populations originally derived from cage birds. 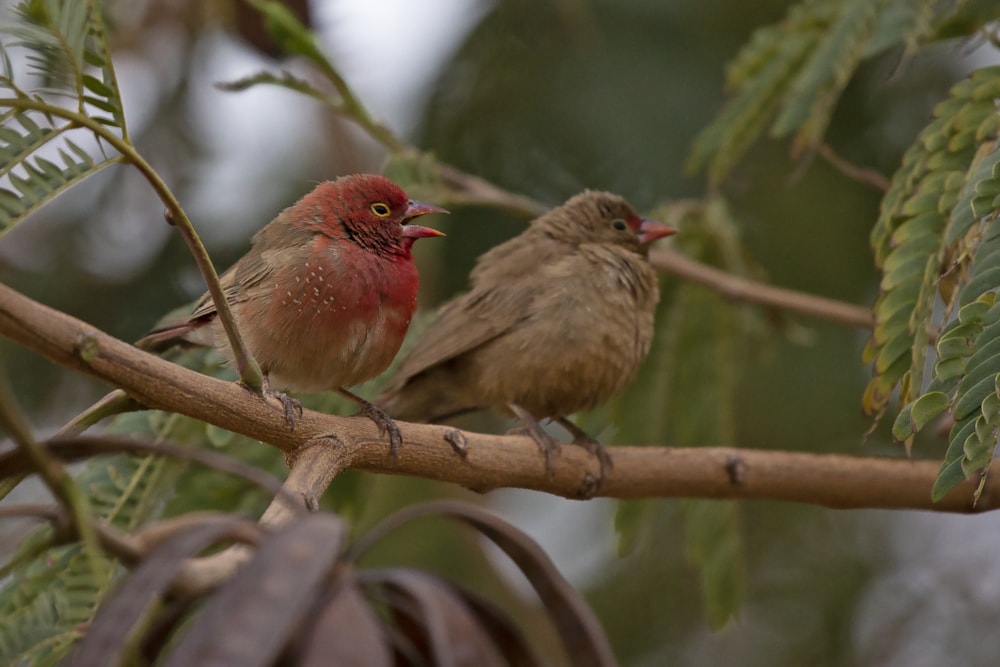 The only example of the genus Lagonosticta within the region, naturally occurring Red-billed Firefinches can be found fewer than 500 km to the south, in the Aïr Mountains of Niger and at Adrar Tigharghar in Mali, although these lie outside the Western Palearctic's southern boundary. Well known and adored by the local population, it is coined 'La Ferrima' after a former French garrison leader named Florimond, who is widely believed to have introduced the species to Tamanrasset in the 1940s.

In addition to the Tamanrasset release, it was introduced into the wetlands at El-Goléa around 1972, 900 km to the north. It has seemingly undergone a massive range expansion in recent decades, although whether this is down to a natural spread or further introductions is unclear. Other healthy populations can be found at In Salah and Hassi Moumene, midway between the two, where they began appearing in the 1990s.

Believed to have spread naturally from Tamanrasset, a large number can also be found in the far east of the country, within the Tassili n'Ajjer National Park, Djanet and nearby villages – an expansion of around 500 km. Long thought safer to visit than the province of Tamanrasset, it is from here that most reports from visiting western birders have originated in recent years. 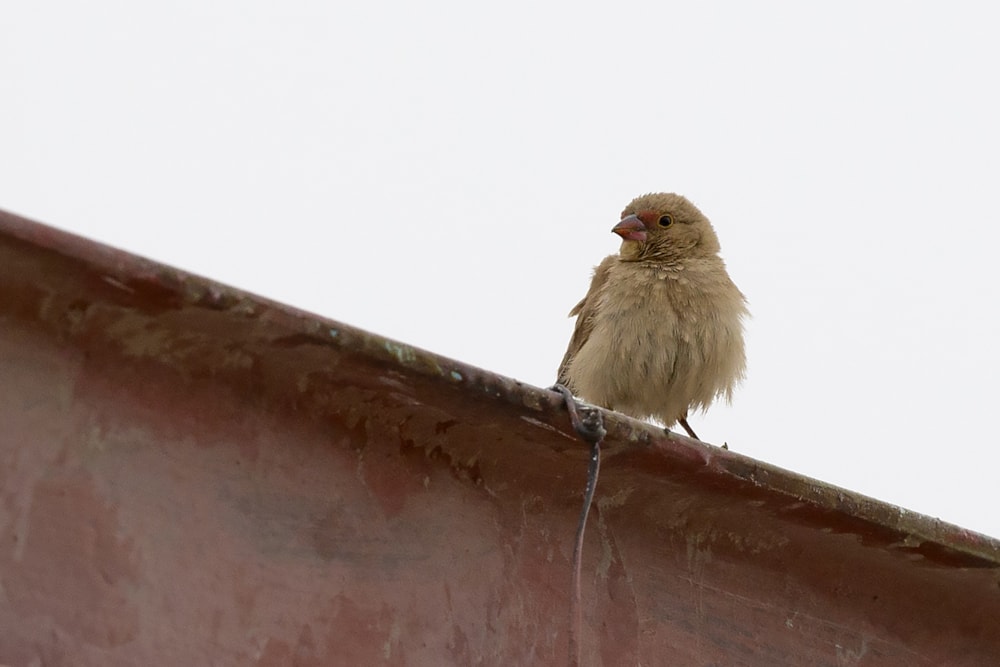 House Sparrow is absent from Tamanrasset, meaning that Red-billed Firefinch has been able to colonise an urban niche usually filled by its larger cousin (Sam Viles).

One of the main hotels in Tamanrasset, Hotel Bois Pétrifié, was our base for two nights in March 2019. The garden to the rear consists of a few small trees and open areas, and a flock of around 25 Red-billed Firefinches. At least one pair was noted nesting in the thatch of a garden parasol. Seemingly widespread in the town, we saw plenty from the jeep as we were driving through the urban centre, with many flying between patches of greenery. The gardens of a tourist office, Assikel Art et Tourisme, also held a healthy number. With a dearth of sparrows in this bustling desert town, firefinches have seemingly filled an unoccupied niche and are likely to pop up anywhere there is spilt seed, seed heads or insect matter.

Outside of town these attractive, characterful finches quickly disappeared, with the settlement of Outoul the only other place we saw any. They appeared confined to the rough land around the houses; the irrigated fields surrounding the wadi instead teeming with more expected desert species. Another nest was observed here, and again within the thatching covering the village's water butts. Studies from the 1960s in Senegal suggest that the species' decline there was linked to the loss of thatched dwellings – it seems possible that the reverse is at play in this instance.

The settlement of Outoul holds a healthy population of Red-billed Firefinches, concentrated around houses and dwellings (Sam Viles).

Many birders will be familiar with Indian Silverbill, which has a patchy distribution within the Western Palearctic, derived from a number of introduced Category C populations. These include Israel, Jordan, Egypt and Kuwait, as well as a small population around Nice, France.

African Silverbill has, in contrast, rarely been recorded in the Western Palearctic region, with a small number of scattered records from southern Algeria. Formerly considered conspecific with Indian Silverbill, it is found commonly across the Sahel region of Sub-Saharan Africa in savanna and sub-desert steppe. Favouring hill and lowland areas, it is most commonly found in acacia grassland, thorny scrub, marshland fringe and cultivated land. The nominate subspecies cantans is distributed through Mauritania and Senegal east to Niger, northern Nigeria, Chad and western Sudan, with the race orientalis found from eastern Sudan across to Somalia, Kenya and northern Uganda, as well as the South Arabian Peninsula. In Egypt it is found only at Gebal Elba, which is outside the Western Palearctic region. 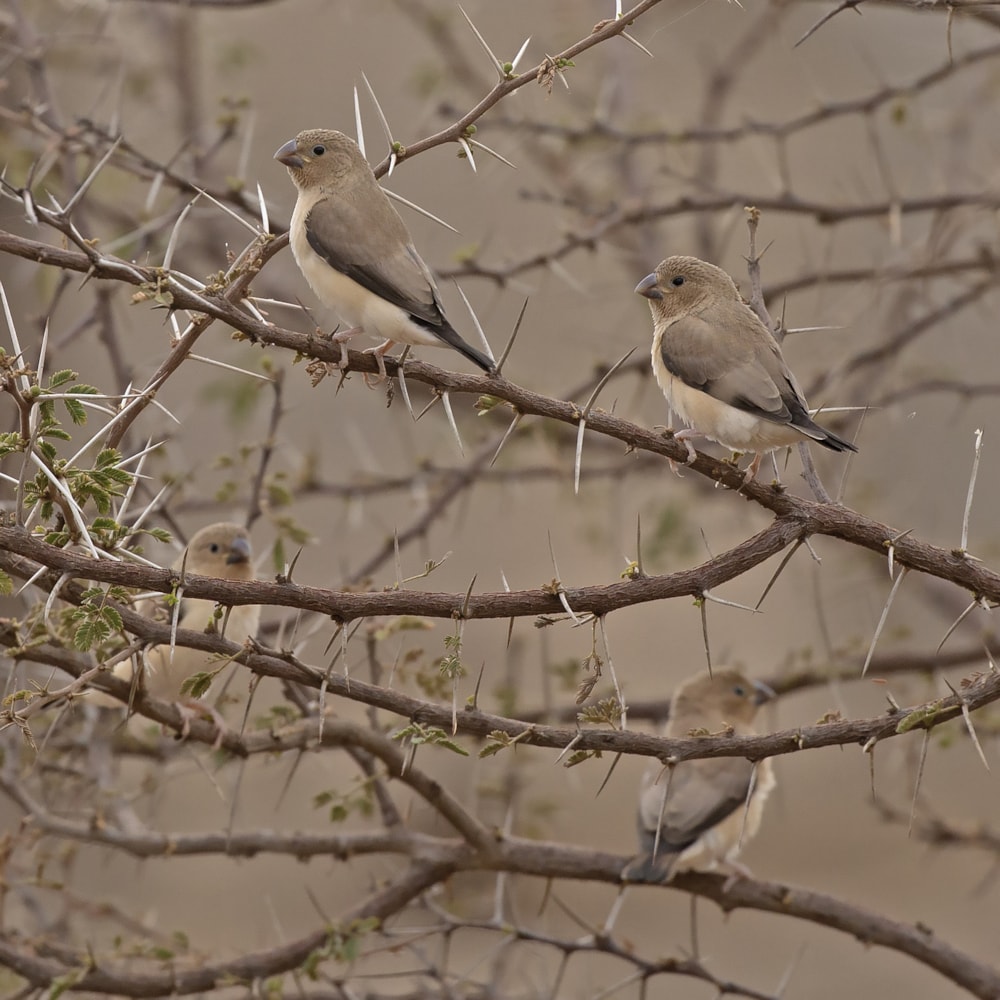 In southern Algeria its distribution is poorly known. A series of sightings date back as far as 1952, when one was collected in Tamanrasset, although observations have always proved few and far between. A pair was noted in the area in 1970, followed by a gap of 28 years until the next report – a breeding colony discovered at the town of Abalessa, 120 km to the northwest of Tamanrasset. Numbering in excess of 60 individuals, the colony was evidently well-established, and it raised questions about whether the species had been overlooked in the past.

Comprising individuals of the nominate subspecies and the northernmost colony in Africa, they are coined 'Zerzour Es-Soudane' by locals, translated as 'Sparrow of the Sudanese region'. A group of Belgian naturalists visited the village of Tit in 2011 and discovered the birds to be well established there. In December 2018 a series of photos were posted onto the identification section of Birdforum, taken in the Tamanrasset area. Among these were a couple of images clearly depicting a small number of African Silverbills – a proof of life to their continued presence in the extreme south of Algeria.

In our two days around Tamanrasset we focused our time exploring village gardens and some of the many wadis nearby. A Google Earth search confirmed that, despite the settlement's location well inside the arid Saharan belt, both the town and villages as well as the surrounding wadis looked surprisingly green with lots of foliage cover, seemingly consisting mainly of tamarisks. The high levels of greenery within the town and surrounding areas meant that we felt confident of having a good shot at encountering the species. 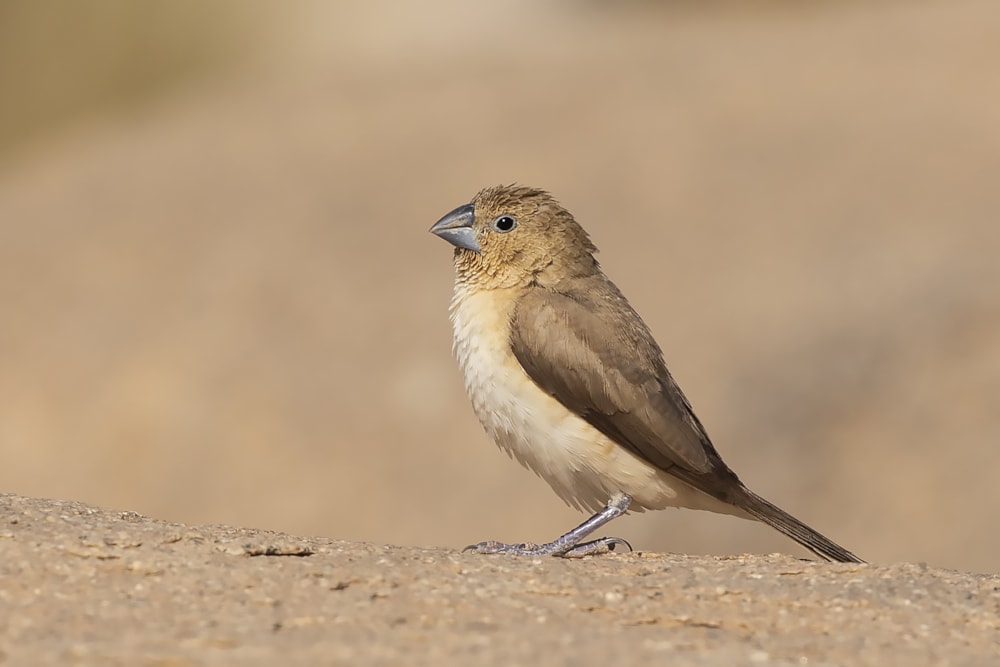 Oued Tamanrasset, to the south of the town and the main outfall of the town's semi-treated sewage water, was our first port of call. Stopping briefly by a roadside pool we immediately found a flock of African Silverbills coming in to drink. Exploring the wadi further it became strikingly apparent that the silverbill was the most abundant species present, with more than 250 individuals seen along just a short stretch. They were ever present in the reedy fringes and dense tamarisk belts along the wadi bed, making the most of the abundant lush vegetation and running water. Bulky cylindrical nests, akin to messy Long-tailed Tits, were observed hanging from the tamarisks and reed stems and included a pair sitting on a nest.

A village further along the wadi comprised an area of larger trees and informal farmland. The concentration of silverbills was lower here, perhaps owing to the lack of available dense cover. A Great Grey Shrike of the local race elegans was watched chasing a silverbill out of a neighbouring bush, the action-packed chase disappearing in a flash around the corner. Much of the wadi here was surrounded by rough cultivation, which the birds found rather to their liking, flying to and from the fields and scrub patches. A number of fresh fledglings with evident gape lines were also encountered.

Oued Tit, 40 km east of the town, was our next stop, complete with our Gendarmerie escort. With flowing water, the wadi was again teeming with life – including at least another 70 silverbills! We also recorded small numbers at Outoul, the irrigated fields there providing an abundance of seed crop and potential nesting sites, and the species is clearly thriving in this remote outpost of the Western Palearctic. 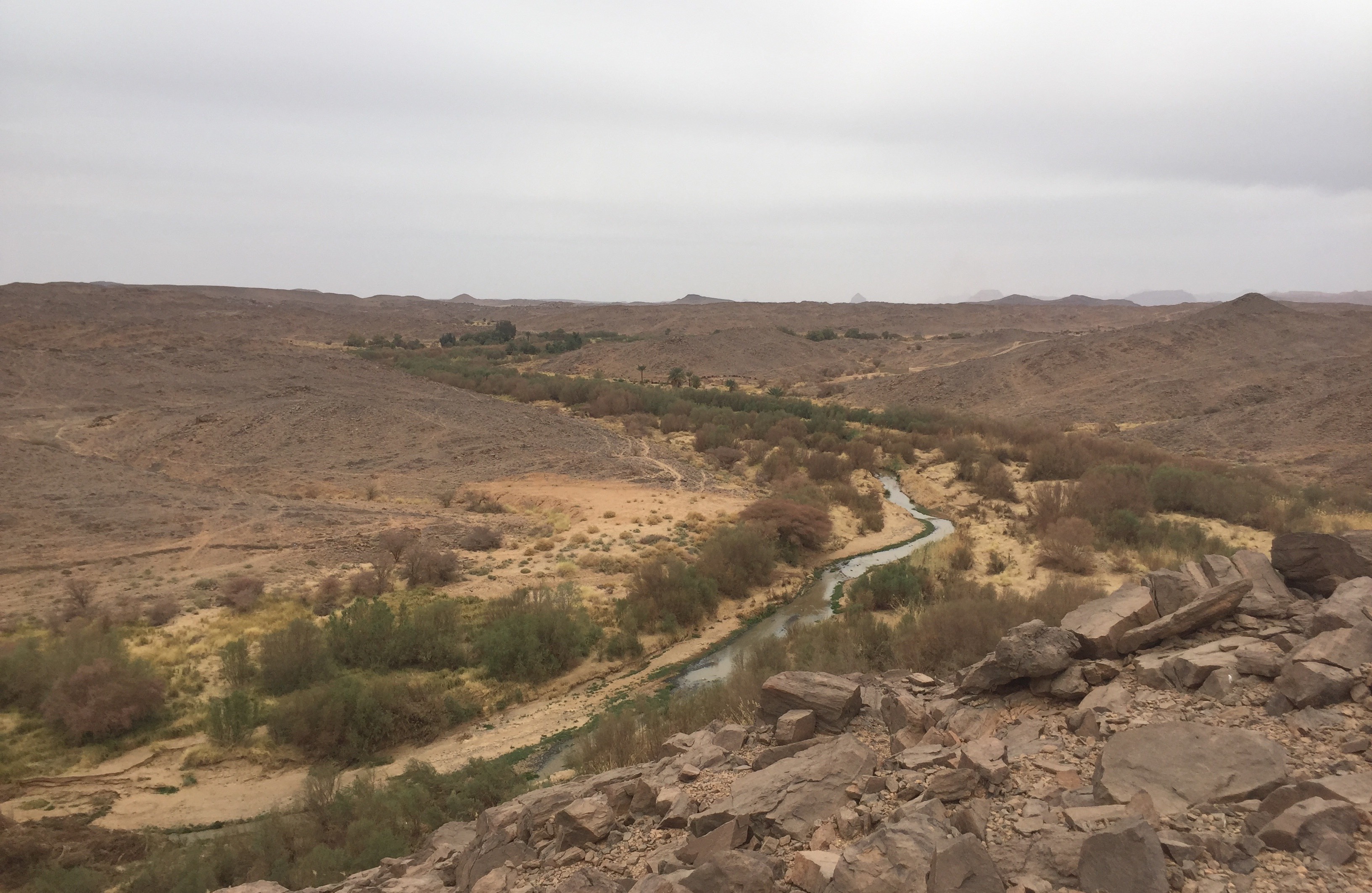 Hundreds of African Silverbills were found at the wadis near Oued Tamanrasset (Sam Viles).

The largest country in Africa, Algeria contains large, unexplored areas of pristine habitat and healthy populations of most of the 'specialist' North African species. Covered by only a small number of native birders, the likelihood of more discoveries remains high, with the potential of further species new to the Western Palearctic or perhaps the rediscovery of some previously considered extinct in the region. With the turbulent political situation having started to look much healthier in recent years, and intrepid travellers seemingly now safer to chance a visit here than in much of the recent past, it is perhaps only a matter of time until the country relinquishes more of its avian secrets to the wider world. 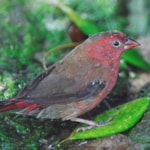 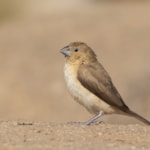