Saturday mornings normally disappear in a frenzy of children's activities — with three active kids who between them swim, play football and dance, there is usually little time for birding. However, on Saturday 3rd May I was woken early by the dawn chorus having left a window ajar the previous evening and decided, as I sometimes do, to slip out for a couple of hours before I was needed to drive the family taxi.

An hour-long seawatch was extremely quiet, a patch year tick Whimbrel being the only bird that found its way into my notebook. By 07:15 things hadn't improved, and thoughts of egg butties and a cup of tea in the garden were beginning to take over, though I decided to have a short walk north over the golf course and moor to the Ash Lagoon bank to search for migrants. The next 20 minutes provided little to add to my notebook; not a single hirundine was on the move and the gorse patches were alive only with the pinging of Linnet after Linnet. A single Common Whitethroat singing from scrub at the south end that had been established for days was probably the best bird — the patch wasn't exactly rocking!

Arriving at the central scrub patch along the Ash Lagoon bank, I heard a song coming from behind a tall metal fence — a short trill or rattle that sounded vaguely Greenfinch or Lesser Whitethroat-ish but clearly not either. I suffer from tinnitus and wear a hearing aid on my right side, so my hearing isn't the best and trying to locate a hidden songster can be challenging. I started to scan the scrub for my mystery singer.

A Common Whitethroat flicked up, then a Phylloscopus warbler darted inside the willow and the short song phrase rattled out again. Another re-scan from left to right and there was the Phyllosc — what's more, the song seemed to be coming from that bird. It then dropped into the scrub again; I could still hear the song intermittently but couldn't see the bird, but after a short while it reappeared, working its way up at the back of the scrub and appeared to be wing-quivering as it sang. 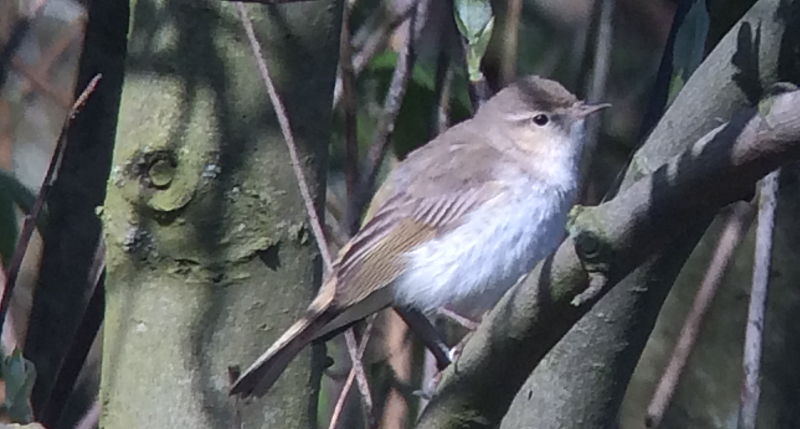 At this point I started working through the identification options, half expecting the trill to turn into something more recognisable at any moment. It was clear this wasn't a 'mis-singing' Wood Warbler as, despite the white breast and belly, it had no lemon yellow on the upper breast or in the supercilium. It was quite plain on the eye; the underparts were a striking white with a brownish-olive tone to the upperparts, a fairly faint supercilium and a noticeable yellow/green wash to the rump. Later, with better views, greenish edges to the primaries and pale-looking lores were noted (though a review of images after the event revealed a dark loral spot).

Alarmed at the possibilities, I began to try and open the Xeno-canto bird sounds website on my phone, only to find — with some horror — that the site was down. At this point, another local birder and regular at Newbiggin, Eric Barnes, arrived. Thankfully, Eric had various songs on his phone, crucially including single recordings of both Western and Eastern Bonelli's Warbler. With views improving, we quickly narrowed down the options to a Bonelli's warbler species.

Within a short time, we both felt that the song was compatible with the recording for Western Bonelli's Warbler that Eric had available. We listened to the recording of Eastern and, to our ears, it didn't fit the bill. After we put the news out, the bird performed very well, keeping to a short circuit around the scrub, often active and feeding but also spending several periods in one place, preening and on one occasion remaining entirely still for over a minute peering intently underneath its perch. By 09:30–09:35 it had gone quiet and, as far as I know, the bird was never relocated after that. Perhaps seven others managed to get there in that time and see it. 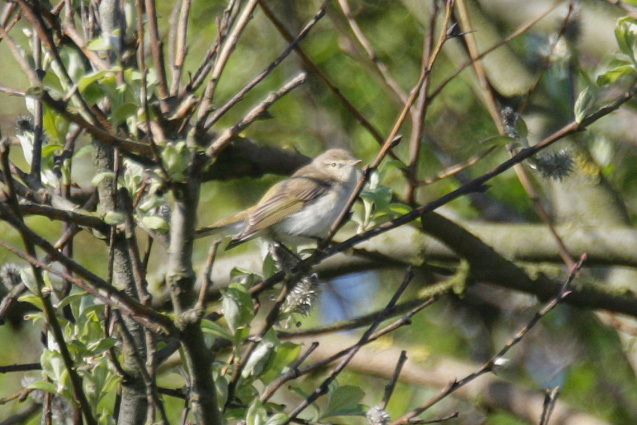 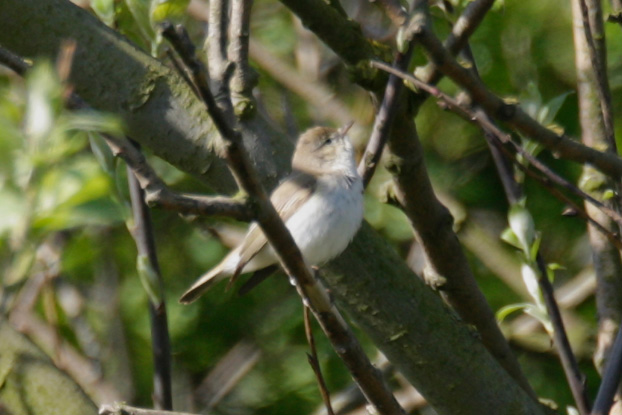 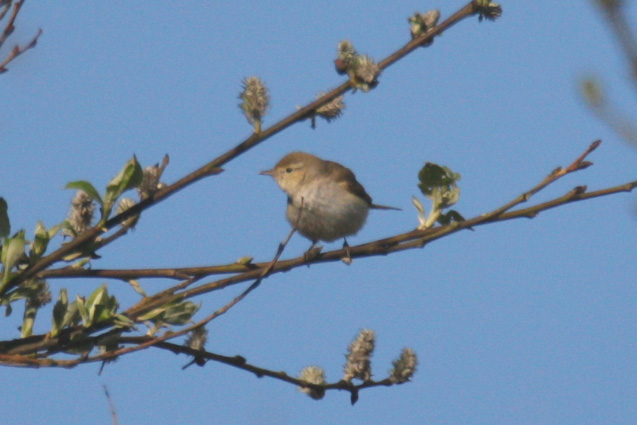 More than one of the observers who turned up queried whether we had 'ruled out Eastern' and Eric played the recording available; at least one other recording was listened to during this time but the identification seemed not under too much doubt.

It was never heard to call; I focused on obtaining sound recordings, images and video of the bird to help with record submission. Over the next few days I gradually processed these as time allowed and made them available online for others to see and hear. With the video published, discussion began on online forums — as is often the case in the digital age of birding. Two notable and respected birders, Brian Small and Richard Millington, commented, with RM stating: "The date (and some support species) suggested Eastern was a probability (there's a disproportionately high number of spring records of Eastern)...When I saw the pictures, I thought it looked like an Eastern (basically, rather reminiscent of a Siberian Chiffchaff), but I'd presumed the call had been nailed...I'm not well-versed with the songs of either species, but Western does tend to have a slightly variable, liquid feel. To my ears, the dry trill of the Northumberland bird sounds very like Easterns on Xeno-canto."

I had been looking at the sound recordings and resultant sonogram that had been produced, particularly with reference to the abstract of a paper published in Dutch Birding in 2011 by Dick Groenendijk & Teus J C Luijendijk1. This paper was the first to describe and illustrate the differences in the advertising songs of Eastern and Western Bonelli's Warblers in spring, and assess the value for field identification purposes. The authors published a table of parameters that were useful in distinguishing between the two species' songs:

Reviewing the sonogram, the frequency of our bird appeared to fall above 7000Hz, the number of notes in each song phrase was constantly 7 or 8 and the length of trill appeared to be quite short, certainly under a second. This seemed to continue to point to an identification of our bird as bonelli. However when the recording was slowed down and placed in direct comparison with an Eastern recording, there was a remarkable similarity that could not be dismissed as chance. The recordings were then sent to the Sound Approach team and Dick Groenendijk for feedback and comment. Within a matter of hours Magnus Robb had responded with a clear conclusion about the identification but some extremely interesting comments about the song of this individual too. Here is an extract from Magnus's comments:

"I've just been studying your Bonelli's warbler song, and it's a bit of an unusual one.

Shape: the shape of the individual elements in the song of your bird is very typical of Eastern. As far as I know, Western never has elements shaped like that.

Number of elements: with 7, 8 and 9 elements in the songs you sent, Western should be much more likely. However, it is still within the range of variation of Eastern.

Length: at around 0.5s your songs are very short. According to the DB paper some are even too short for Western.

Pitch range: as you wrote, your bird reaches quite a high pitch, and this should be a pointer towards Western. However, I'd just found an example of Eastern with equally high pitch, so it cannot be excluded on these grounds."

Early the following morning, this was followed by a response from Dick:

In addition, Dick shed some light on the frequency or pitch range, providing an important lesson on sonogram analysis in the process:

"Another important pointer is the maximum frequency, which is also too low for bonelli. You suggest that this is over 7000 Hz. However, when I look at the sonograms, only the harmonic shadows of the song notes are reaching over 7000 Hz. The real and clear song notes are reaching about 5800–5900 Hz, which perfectly match orientalis...when looking at the sonogram, you see the dark coloured sound. That is the 'real' sound which is important. The more faded colours are not the real sound but a sort of harmonics."

It seems clear then that we had reached the wrong identification conclusion, both initially and after a limited analysis of the sonogram. That this was clearly an unusual song offers some explanation as to how events unfolded, and Magnus Robb summed it up neatly with this plausible theory:

"The unusual number of elements and length surprise me, but I wonder if the explanation could be that this was a bird still on migration and singing a plastic song. Wood Warblers are well known for singing very short versions of their usual song on spring migration (that can cause confusion with Bonelli's [species]). Maybe Eastern Bonelli's can too?"