Over the long weekend of 4-7 March, Oliver Metcalf and I spent time birding on the west coast of Ireland. Following a successful Saturday in Counties Sligo and Mayo – twitching the American Coot and 'Small Canada Goose' – and a mixed Sunday in Co Galway – finding a very Canvasback-like hybrid on Lough Corrib but not a lot else despite grafting – we headed down to Co Kerry late on Sunday evening. Our aim was to cover a number of the sparsely watched sites on the Iveragh and Dingle peninsulas throughout Monday. The day dawned wonderfully still and sunny, although flat-calm conditions didn't stop an early-morning search for Surf Scoters in Ballinskelligs Bay being unsuccessful. Nearby Reenard Point harboured the regular adult Iceland Gull but little else – not the most thrilling start to a day on a peninsula that is criminally underwatched!

Heading back along the north side of the Iveragh, we reached Glenbeigh and decided to call in at the nearby spit at Rossbeigh to search the Common Scoter flock offshore – I vaguely recalled that there had been sporadic reports of a Velvet Scoter offshore since January, and fancied the chance of possibly picking up a Surf Scoter on such a calm day. On arrival, at around 9.40 am, it was apparent that there were a few hundred Common Scoter close inshore, showing very well in the beautiful light conditions. Within a couple of minutes I picked up the 'Velvet' amongst a small flock of around five Common Scoters, at a few hundred metres' range, and got Ollie on to it. Although the bird was feeding vigorously and regularly diving, there were immediately noticeable features that did not fit my recollection of the appearance of a typical drake Velvet Scoter – most striking were the impressive white 'tear' behind the eye and the rather bulbous-based bill, with a reddish-orange tip. 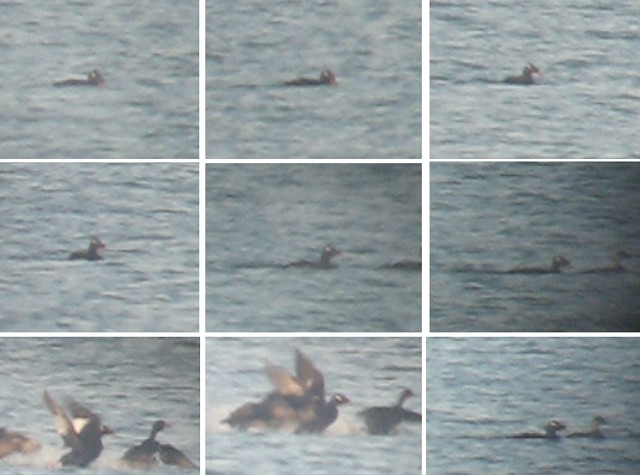 I mentioned my concerns to Ollie, who concurred that he had thought similarly. It was at this point I tentatively raised the possibility of White-winged Scoter, and we tried to recall features from memory. With no literature to hand, as well as neither of us having seen drake Velvet Scoter at close range for some time, I decided to text a few friends back in Britain for any features that might help us out. Marc Read was most helpful and sent a few descriptions through via text, although without illustrations or photos to hand it was difficult to appreciate the descriptions fully. Ollie scanned the bay looking unsuccessfully for other Velvet Scoters for possible comparison, whilst I decided to take some video footage with my camera which, although shaky, eventually proved invaluable in setting off the chain of events that led to the reidentification of the bird. After a minute or so, the Common Scoters with which the bird was associating became restless and flew out into the bay, frustratingly taking the 'Velvet-type' with them to a range of a mile or so, where it continued to dive for spells of 30 seconds or more at regular intervals.

We spent a further hour watching the bird at distance, and even at extreme range the features seen earlier were very noticeable. The white tear behind the eye was still obvious, and the red-orange colouration of the bill contrasted well with the yellow of the drake Common Scoters it was amongst. Marc had sent us a description of the American subspecies deglandi, which would seem the more likely option in western Ireland, although a couple of features didn't seem to fit. We couldn't see the brown flanks that characterise deglandi and also felt that the forehead was not pronounced as is typical of that form. With the bird not appearing to show any interest in coming closer, we reluctantly decided to move on to Dingle, leaving the bird still at extreme range. 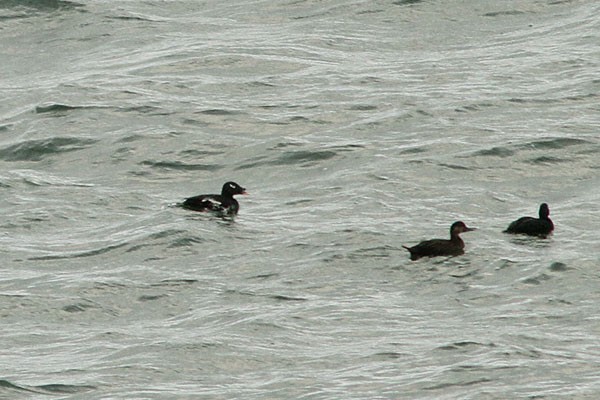 Back home on the Tuesday, I managed to get hold of some literature as well as trawling the internet for images. Throughout the day, I was in regular contact with Ollie, and we became increasingly confident that the bird looked to be one of the White-winged Scoters, despite some features seeming inconsistent with deglandi. That evening, I emailed Kerry recorder Ed Carty, expressing my concerns that the bird could be a White-winged Scoter, and asked him to forward my thoughts to local birders who might be able to check the bird out. The next morning, I received a text to say that the scoter had been confirmed by Killian Mullarney as a White-winged! It later transpired that Davey Farrar, the original finder of the bird, had been spurred on by my email the previous evening to contact Killian with a couple of record shots. From our notes, images and recollections, the bird appeared to fit the Asian subspecies stejnegeri better than deglandi, an even more surprising occurrence for western Ireland. This inclination has since been reinforced through further field observations by Davey and many others who have travelled to see the bird over the past week, with some great photos emerging that show the bird is, indeed, a Stejneger's Scoter.