On the morning of Saturday 31st May 2014, a group of twelve keen members of the public and I went out on our monthly 'Birds of Poole Harbour' field trip. Part of our remit as a charity is to host these guided walks, taking people to some of the best birdwatching habitats in and around Poole Harbour, highlighting the main conservation stories and, of course, hopefully showing people great birds. This trip was being hosted at Morden Bog in Wareham Forest, which is a vast expanse of open heathland surrounded by coniferous plantation. The trip started off brilliantly as we were treated to two singing Cuckoos from the car park, with one even performing a fly-by as we listened.

The walk got underway at dead on 7am and within the first few hours we had already been treated to stunning views of Dartford Warbler, Woodlark, singing Tree Pipit and many Stonechat, not to mention 5 flyover Crossbills and plenty of Siskins. Halfway through the walk I decided we should make our way to 'Decoy Cottage' on the other side of the heathland in the hope of finding Redstart and Spotted Flycatcher, which would be two more lovely additions to the list.

En route to Decoy Cottage, a member of the group, Alan King, pointed out a bird of prey sitting in a tree up on a hill across the heathland. I lifted my binos and was greeted by a large pale blob, so took to the scope and was greeted by a large pale blob with talons! As the guide, it was my duty to ID the bird confidently and keep up the bravado that I actually know what I'm talking about, so I went about trying to ID it fairly quickly. "Pale-phase Buzzard," I confidently announced, pointing out that Dorset has a fair number of these birds and that they often get mistaken for something else. We looked and looked at the bird, taking in just how pale it was, and carried on towards our planned location.

As luck would have it, our route was taking us right towards this pale-morph Buzzard, so as a group we decided to stop again to take another look. This time things didn't add up, and the bird was starting to look a bit peculiar and my heart started beating a little faster. My next logical and rational thought was Honey Buzzard, having seen a very pale individual less than a few miles away at Lytchett Bay a few autumns ago. But instantly you could see the head was much too big and the tail too short. What the heck were we looking at?

The first photo of the Short-toed Eagle upon discovery (Photo: Paul Morton).

Now, I'm not afraid to admit I was totally stumped so we edged a bit closer, and this time our views were impeccable with the bird just sitting minding its own business as the bemused crowd and I looked on. Going through field notes, and running things through my head, I was about to give up when a thought so ludicrous, so utterly stupid, entered my head that I honestly almost threw up. I looked at the bird again and then calmly (on the outside, but going totally apoplectic on the inside) asked group member Martin Wood to open his Collins Bird Guide to page 101: Short-toed Eagle.

No one actually said it, but I'm sure in their heads they were thinking "Paul, you really have lost it," but as Martin flicked to the relevant page the puzzled but massively excited crowd (including me) couldn't believe that there on the page was an exact replica of what we had just been watching. I can still hear the thud, thud, thud of each of our jaws hitting the ground! In that time the bird had gracefully taken to the air and flew low right over our heads showing off the spectacular almost pure cream/white underwing, breast and belly. I was in pieces; I felt sick and was shaking like a leaf.

Profile shot of the Short-toed Eagle by member of the group, Roger Starbuck.

Now what? I gingerly phoned various friends and colleagues including my boss Mark Constantine to explain that we had just had a Short-toed Eagle sitting in a tree not 80m away from us...I mean, how do explain something like that without people thinking you're an absolute twonk? I vigorously tried sending my digi-scoped shots to as many people as I could, but typically I had no 3G signal. I had to get these photos to someone quick so, as we were at the end of our walk, the group kindly excused me and I ran the last 200m to the car as fast as I could.

Although it was blatantly obvious what we had just been watching, there was still 1% of my brain that wouldn't accept what had just happened: a Short-toed Eagle, sitting in a tree, 2 miles from my house — this can't be real?! I arrived at my friend Shaun Robson's house having talked through all the features over the phone with him; barely able to walk up the steps to his front door, dripping in sweat, I pressed his doorbell. Shaun answered the door and I said nothing but just held up my phone... "my God, it is a Short-toed Eagle!" 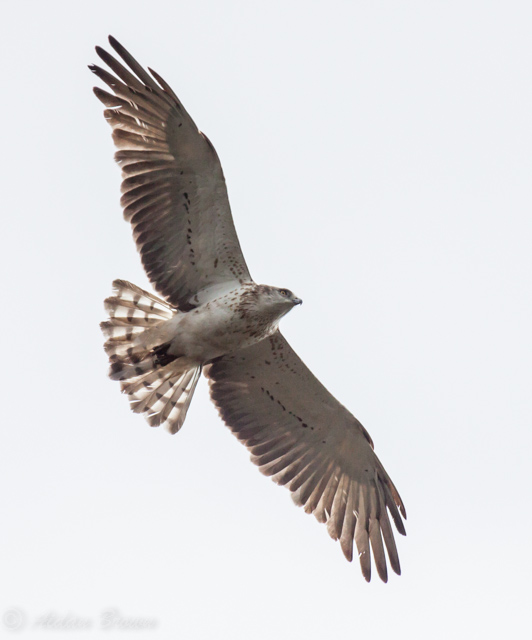 As everyone knows, the bird returned to almost exactly the same tree later that day and there it stayed from around 4pm on Saturday afternoon until 10am Sunday morning. My best estimate is around 750–800 birders got to enjoy the eagle which, other than the actual discovery, was by far the best part. I must thank the members of the group who were with me at the discovery, who worked so well as a team during the pandemonium and kept me from totally losing the plot which, I have to admit, I was very close to at one point! 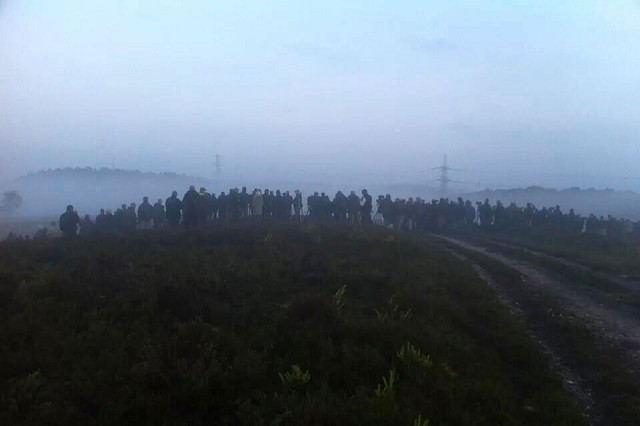 The Sunday-morning crowd as the fog cleared — comparisons to scenes from Zulu and Braveheart were made! (Photo: Andrew Kinghorn)

What a morning and what a guided walk.