Saturday 3 January 2015 was a lovely crisp day with no wind to talk of and I decided to go for a walk. I carry out the monthly WeBS survey on the lower section of the River Don from the mouth to the Brig o' Balgownie, but often walk from my house to the next section of the Don, which forms a boundary to the Seaton Park.

I walked along the south bank getting good views of Goldeneye, Goosanders and Moorhen. About halfway round the riverside walk I noted a pair of Dippers displaying and calling. It was about 3 pm and the light, although good in open areas, was beginning to fade. Just after seeing the Dippers a duck flew downstream ahead of me, about five feet above the water, and although my first reaction was that it was a female Goldeneye, something seemed strange as I couldn't see any white on the upperwing.

The duck flew towards a bend in the river where the terrain changes; the river bank is steep on both sides here, rising to height of about 20 feet which obviously restricts the light a bit — particularly at this time on a winter's afternoon. The path also starts to rise up, leaving the riverside and climbing to around 30 feet above it. As I started up this path I noticed the duck on a rock in the water, just below a rapid section of water. It was preening.

I should say at this point that although I have been birding for years, I do not consider myself to be an expert in any shape or form. As I watched the duck preening I recognised it was something unusual but, like most amateurs, I erred on the side of caution and thought it must just be a common species with atypical plumage. I didn't have a camera and with the receding light a photograph using my phone was not an option; however I did make a voice recording of what I was looking at. I noted the bright white circle ear coverts, the white extending from the base of the bill to below the eye, the steel grey bill, the dark legs and what I thought was a light area on the shoulder of the wing. 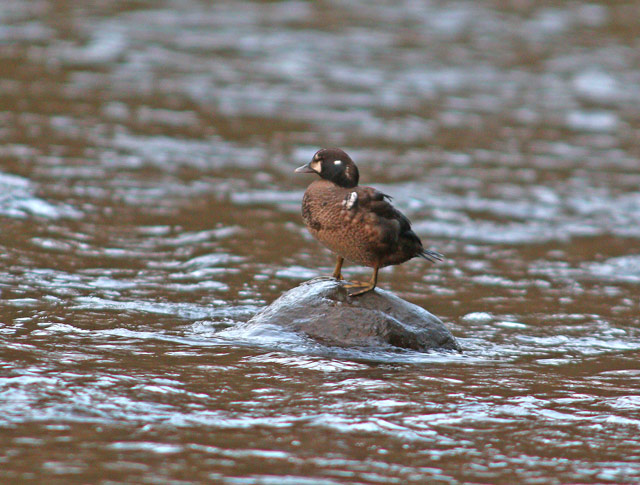 Although I had seen pictures of Harlequin Ducks I had never seen one in the flesh and did not even contemplate it as a contender. On arriving home I referred to the various bird books to check. Velvet Scoter and Scaup were initial possibilities but when I saw the image of a female Harlequin in Lars Jonsson's Birds of Europe, I knew it was the bird I had seen.

I phoned my good friend and birding mentor Mark Sullivan, and described the duck to him. Although he did not dismiss my Harlequin theory, he did question it as he knew better than I how much of a rarity the species was. Having agreed that it was a possible Harlequin, I said I would go back first thing the next morning to see if it was still there.

I returned to Seaton Park at 8 am the next morning. Armed with my binoculars, telescope, tripod and compact digital camera, I retraced my steps from the path that enters the park at the Brig o' Balgownie end. I worked my way past where I had first seen the duck on to the area where they have a small canoe course but there was no sign. I doubled back and eventually went down to the river edge where I had seen the duck preening the previous afternoon. Scrambling along the roots and rocks, which were covered with frost, I tried not to fall in the river. Just as the terrain was getting particularly difficult, a duck flew past me upstream about six feet off the water. It was dark brown but I saw the white markings on the head and realised this was my target. There is a bend in the river at this point, and the bird continued upstream rendering it soon out of view.

I was pleased that it was still around but was otherwise frustrated that I had no idea how far it had flown. I gave chase. Unfortunately there was still no sign as I made my way back to the picnic area, where I sat and contemplated my plan of action.

While working out how much longer I could afford to spend attempting to locate the bird, I became vaguely aware I was being watched. On the other side of the river, slightly downstream of me, was my target! Panic set in as I unpacked my telescope, tripod and camera. No doubt many birders can sympathise when I say that trying to take a photograph of a constantly diving duck by holding a compact camera to a telescope with extremely shaky hands is not easy! You can only imagine my frustration at managing just one shot of the bird — and then the camera battery died! To make matters worse, the bird then decided to fly off downstream and round the bend in the river and out of sight. 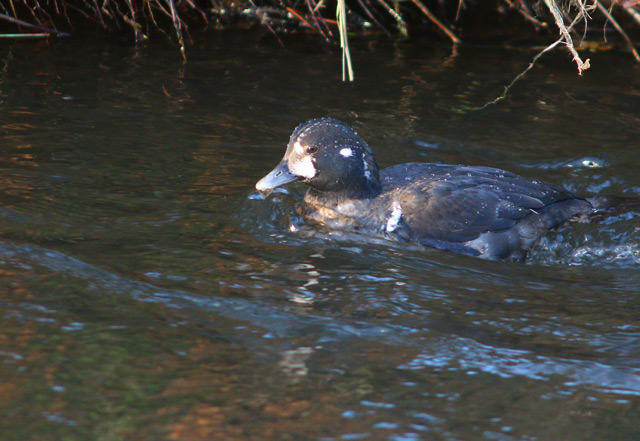 The Harlequin seems to have found the fast-flowing waters of the River Don to its liking (Photo: Paul Bagguley)

I made my way home and downloaded my single, very poor, photograph and sent it off to Mark who forwarded it to another couple of local experts including Paul Baxter. Later that evening it was confirmed as a Harlequin. I just hoped that it would remain long enough for other people to see it add it to their North-East Scotland lists.

The bird is still present at the time of writing and has since been confirmed — with better views — as a first-winter drake. I must confess that I didn't obtain good views of e.g. the white stripe on the foreflank and had assumed the bird was a female based on its generally dull appearance. 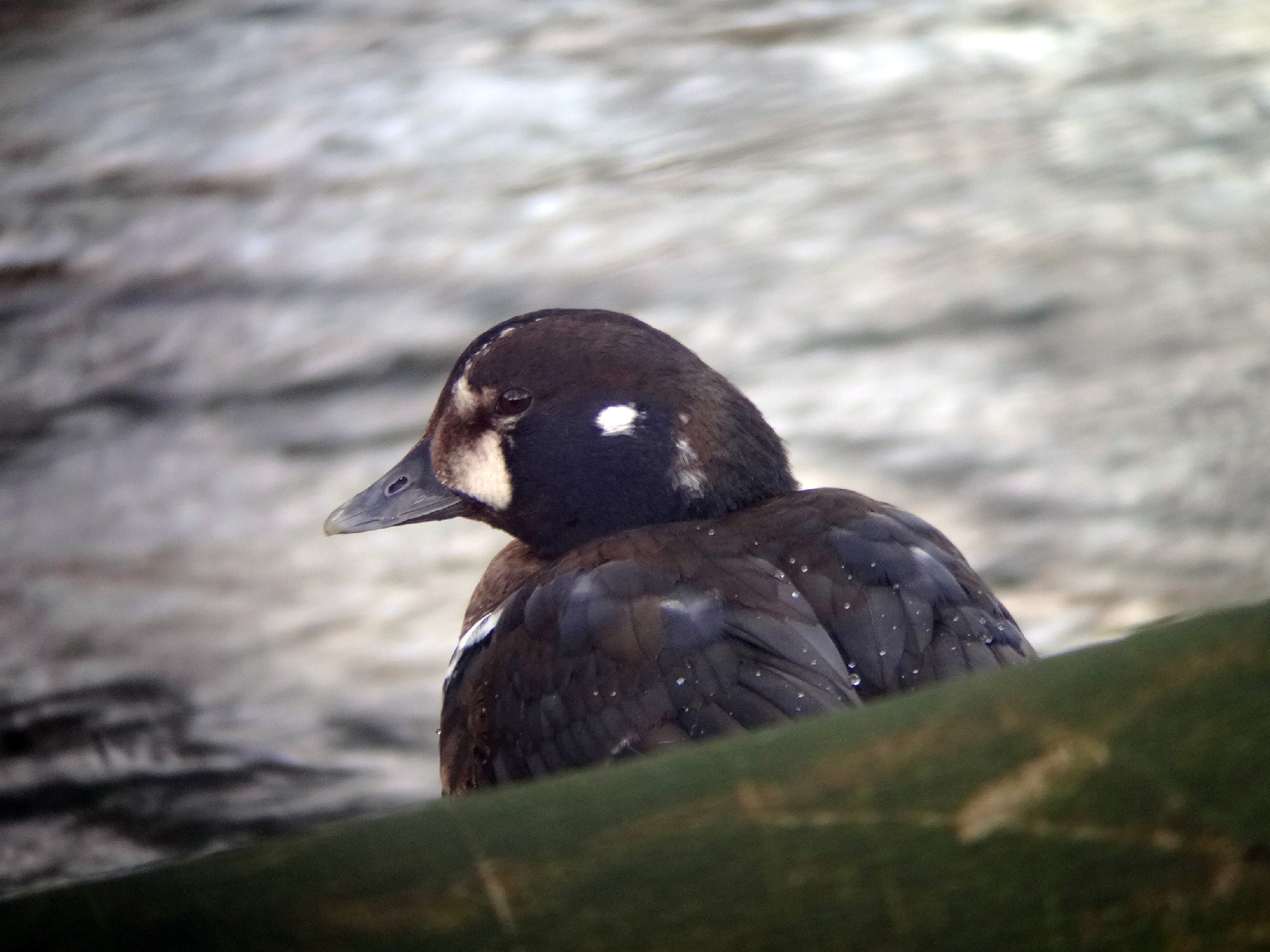 The bird has been giving particularly good views since the beginning of the weekend (Photo: Andy Hood)