With nearby Papa Westray taking a strong lead in terms of rare and scarce birds seen this spring across Orkney, the North Ronaldsay Bird Observatory team had been left a little bemused in the run-up to the beginning of June.

The winds were in the right direction and it felt like things were dropping in everywhere apart from where we were. Finally, on 31 May, a return on all the effort we'd been putting in came with a singing Marsh Warbler at Holland House. It felt like the something we needed to keep our chins up!

Things were looking better again on 1 June as Gavin found our third Red-backed Shrike of the year at North Manse, while I managed to trap yet another Marsh Warbler at the start of my netting session, which began to sing once it was released. 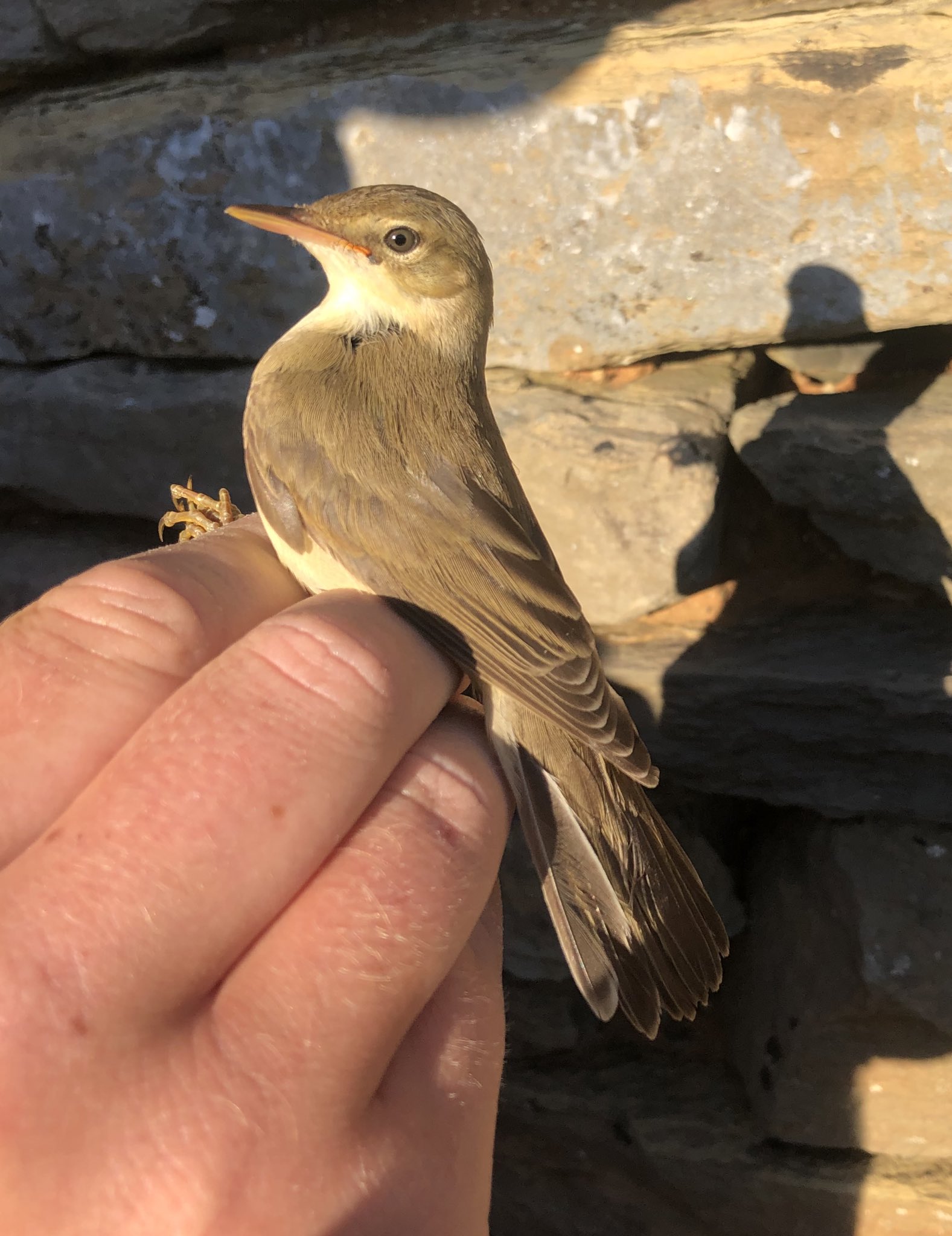 One of small flurry of Marsh Warblers on North Ronaldsay at the end of May and beginning of June (George Gay).

With things ticking along nicely at around 8.30 pm, I noticed a small warbler flicking about in the denser areas of Sycamore in front of Holland House. Seeing that it was fairly yellowish and having heard a Willow Warbler singing in the garden I naturally put two and two together and just hoped it would find its way into net.

An hour or so later, having just ringed a fledgling Blackbird and in the process of taking it back to release it where it had been caught, I saw a small warbler was in the net where I had seen the 'Phyllosc' earlier that evening. 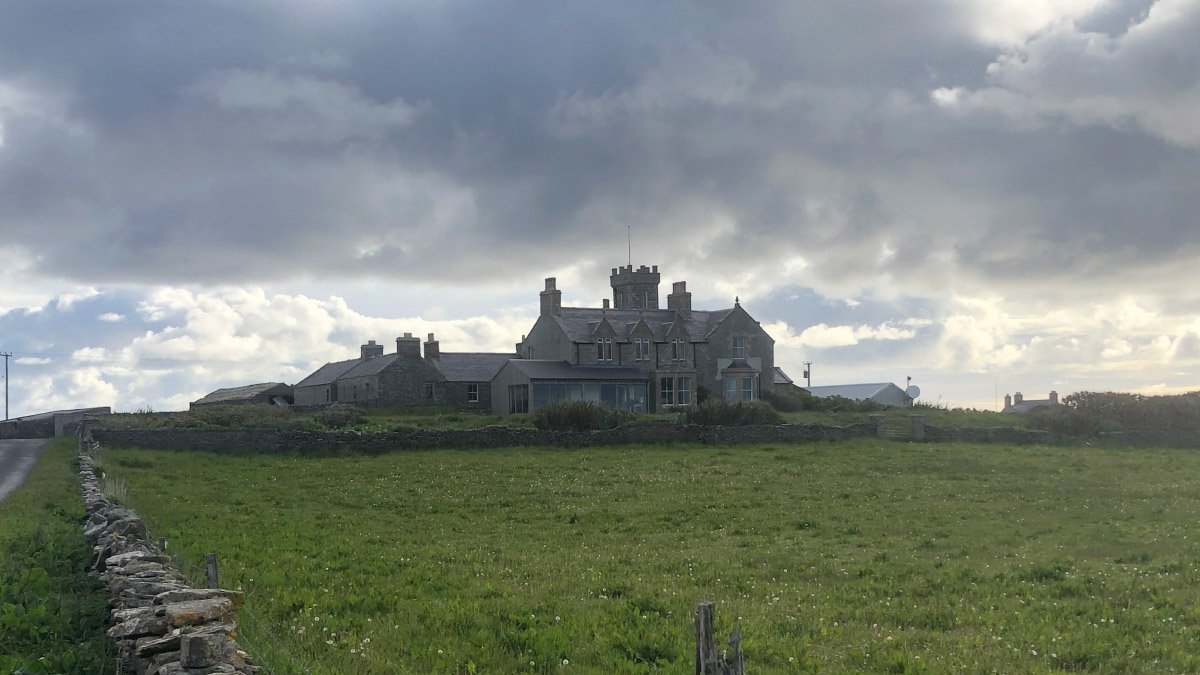 Holland House is an iconic name in British birding, having attracted many rare and scarce birds over the years (George Gay).

On approaching I could see the bird had a lemon-yellow wash to it, reminiscent of the colour you would perhaps see on an Icterine or Wood Warbler. Naturally I expected it to turn out to be a Wood Warbler but, as I picked it up, I could see it clearly wasn't. Thoughts moved back to Willow again, but it just didn't feel right, the reason becoming apparent when it came to taking the netting off the bird's wing … "Is that – it can't be – a bloody wing-bar? It is as well!"

Now, thinking it had to be a Greenish Warbler, I popped it safely into a bird bag (Erin Taylor at Portland will be pleased to know it went in the floral bag she dubbed the "rare bird bag" during her time up here!).

With phone calls to observatory staff and a failed attempt to get hold of Peter Donnelly, I began to scrutinise the bird more closely. I felt that, although it was bright, it seemed to fit what the literature said about Greenish – so I put it back in the bag and waited for the others to arrive.

A little later, as they wandered over to me, I took the bird out the bag and Gavin's remark was "that's so bloody yellow!" Rael mentioned Green Warbler, having looked at a distance through his bins – and that's where the fun began! 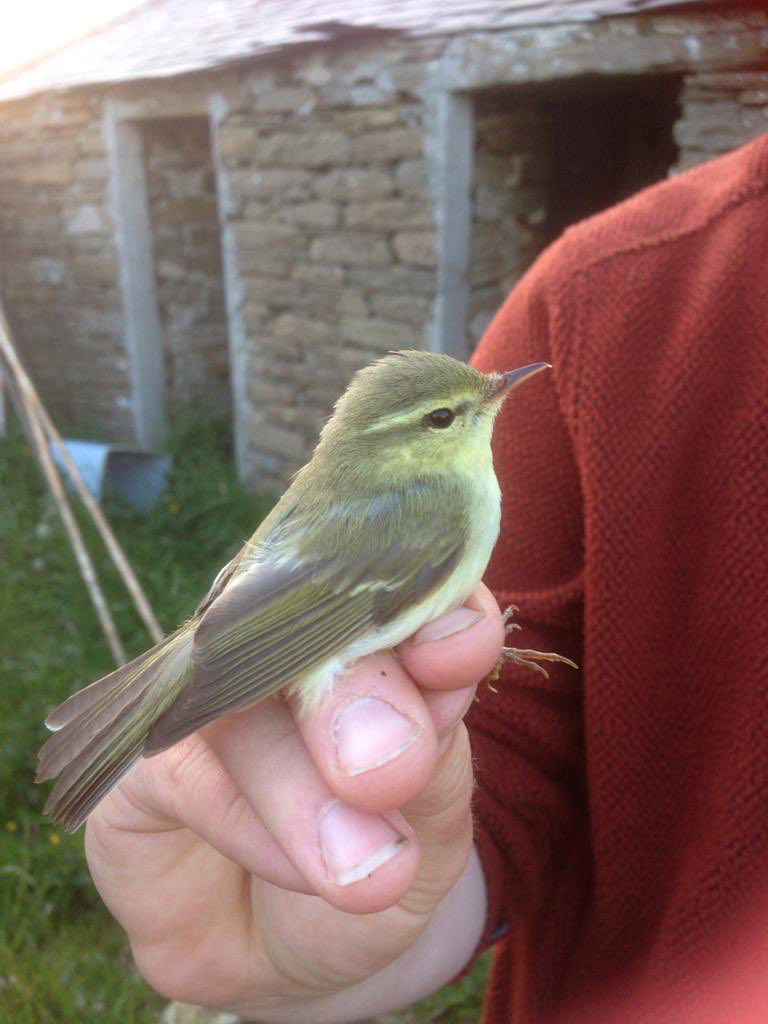 Regardless of the pose or light conditions, the bright, Wood Warbler-like colouration of the bird was always noticeable (North Ronaldsay Bird Observatory).

We took biometrics: a wing length of 65 mm, P2=7/8 and a strongly emarginated sxixth primary made the bird a good candidate for a Green Warbler. Having discussed this, photographed the bird extensively and collected dropped feathers for DNA sampling at a later date. We then released it, where it showed briefly in a Rosa rugosa bush before dropping out of sight. 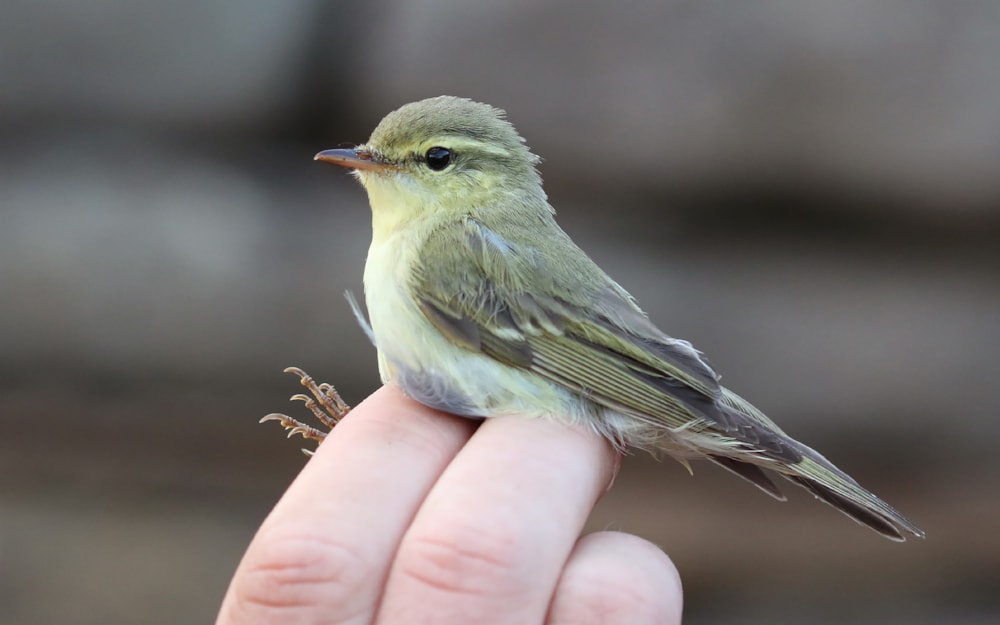 I packed up, came back and put some images online, releasing the news as a Greenish in the knowledge that if the wider audience of social media birders had similar reservations on its identity, we'd hear from them. And so it proved, with plenty of support in favour of Green Warbler emerging the following morning.

For now, we won't be draining the bar of its supplies. In our eyes, the bird remains a strong candidate for Green Warbler. But, with it only fairly recently being a species that has come to the forefront of British birding and such a small sample of past accepted records from which to compare, we've decided to apply caution and wait for the folk at the University of Aberdeen to work their magic on the genetics. I'd like to thank Dante Shepherd, Josh Jones, Mark Warren and Steve Stansfield for their input on the identification. 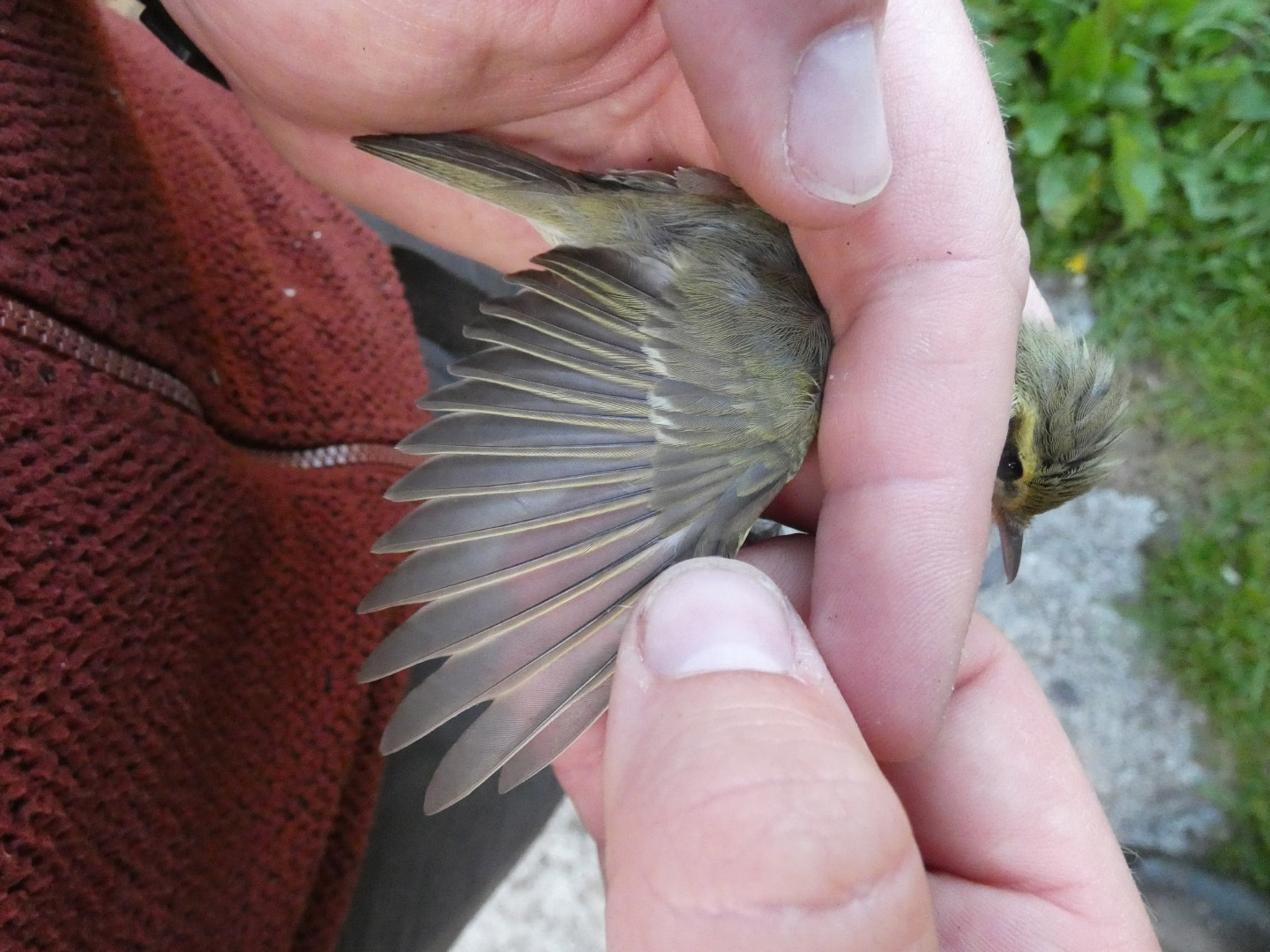 In this image of the spread wing, the hint of a second wingbar on the median coverts can be seen (Gavin Woodbridge). 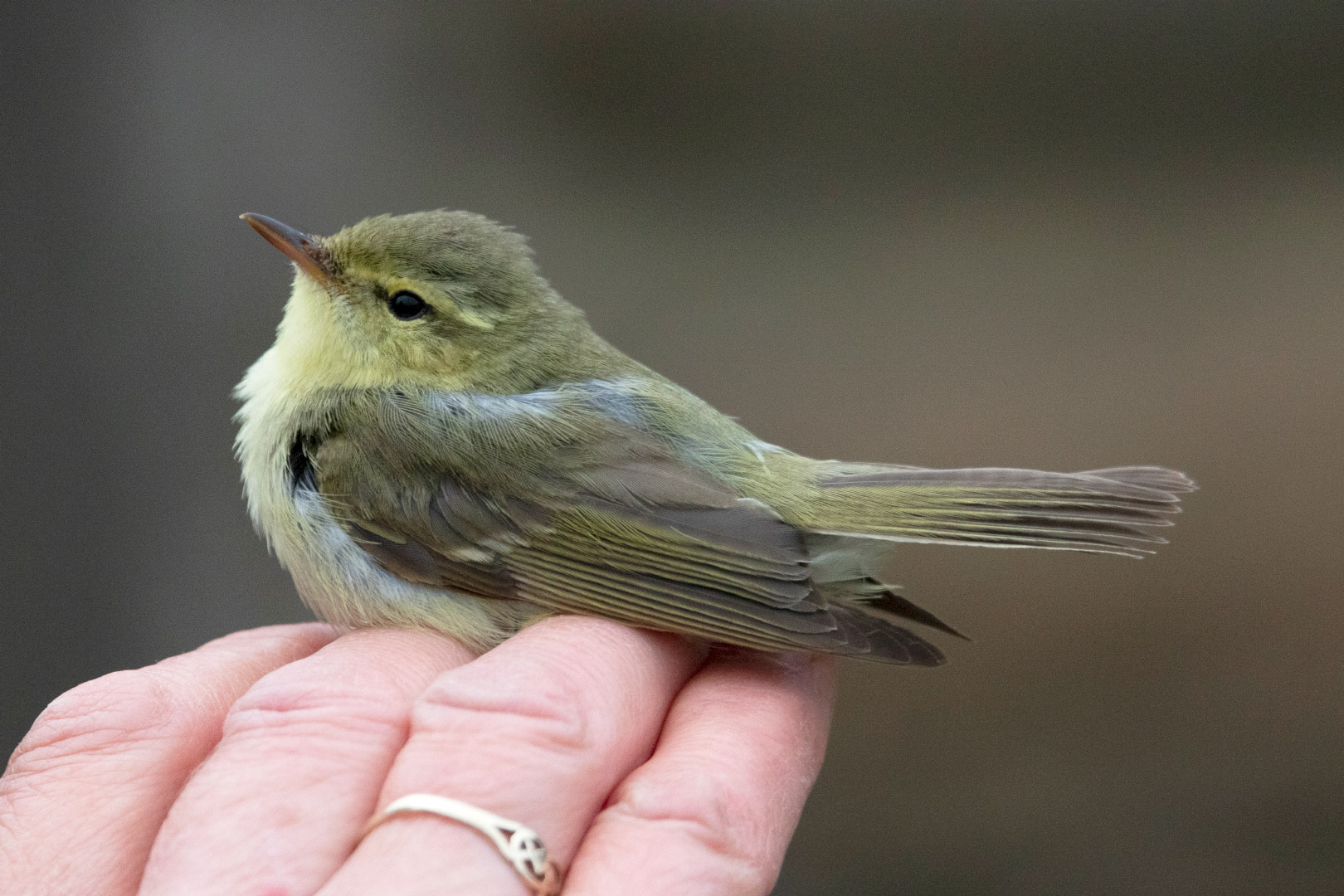 The lemon-yellow feather making up the lower eyering is said to be diagnostic of Green Warbler, but also note the extensive yellow wash to the underparts (George Gay). 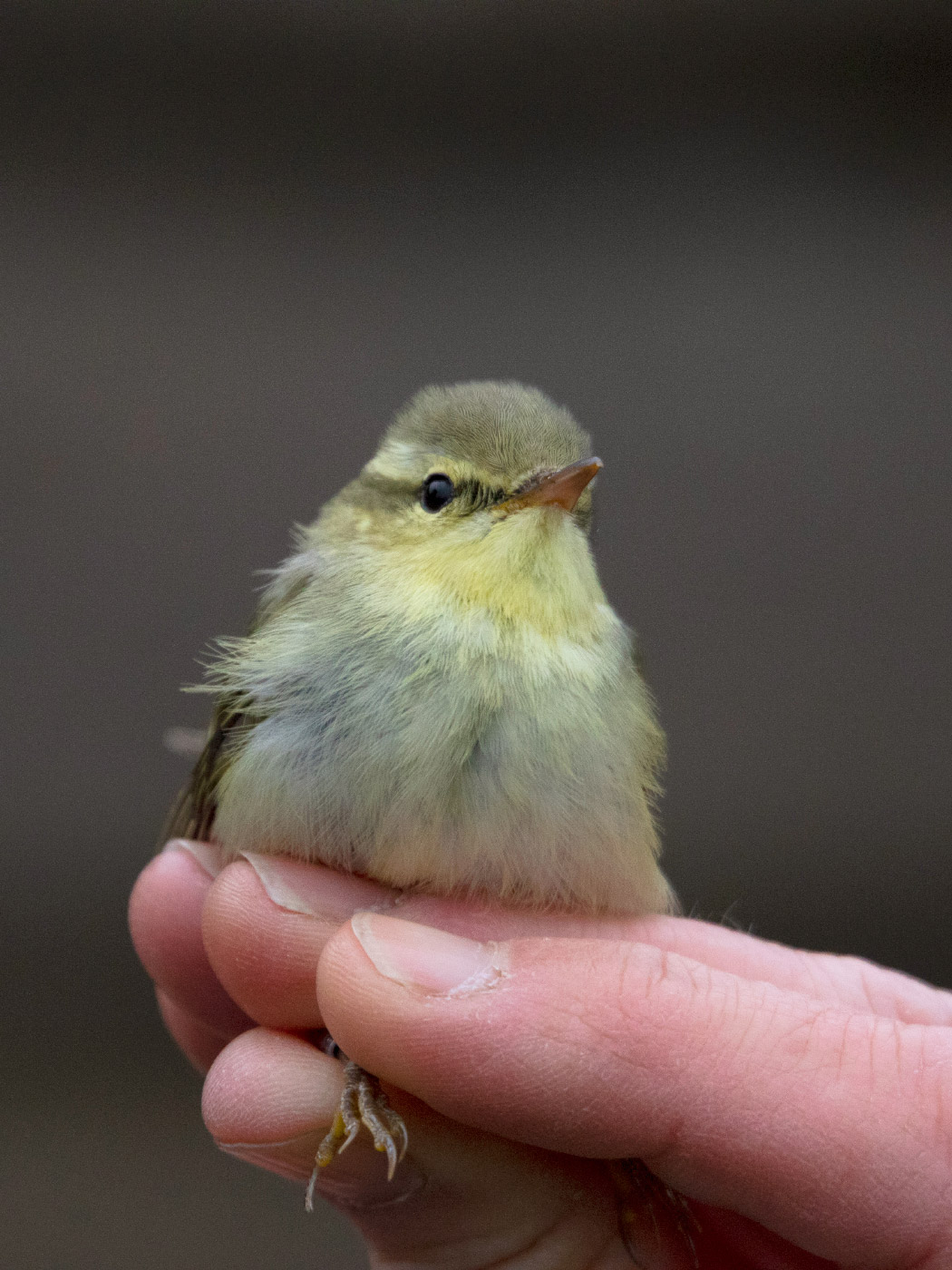 The lemon-yellow colour was richest on the fore of the supercilium, as well as across the throat up to the ear coverts (George Gay).