I have been covering a local patch at Low Newton-by-the-Sea in Northumberland for some time now. I've always found it a rewarding form of birding and over the years I have learnt a lot about the local habitats, the weather patterns that may affect migration and, of course, the birds themselves. On Sunday 5th May, the weather forecast was looking promising for the coming week, suggesting persistent and strengthening southeasterlies from the continent combined with a front of rain over the coast here in the Northeast — the magic formula for delivering spring migrants! One of the joys of being your own boss is that you can authorise your own flexi-time (!) and, with the forecast in mind, I decided to work hard for a couple of days to get on top of things before then taking time off midweek for birding should the forecast come good.

Wednesday 8th arrived, and the forecast was holding true — as I looked out of the window, I could see that the wind was in the southeast and a nice murky fret was starting to roll in off the sea. With the weather forecast suggesting the imminent arrival of rain I called my birding friend Sean Ronayne, and we prepared to head out to the local headlands to see if we could find any grounded migrants. Mid-afternoon found us driving the short distance to the Tin Church at Low Newton-by-the-Sea to start our migrant hunt. The rain was beating off the windscreen and I got a sense that Sean's (and perhaps my own) enthusiasm might be waning a little.

Spring migration here often lacks the large 'falls' of birds that can be a feature of the autumn — it is for this reason I have always found spring the more challenging season. However, previous spring birds here have included Lesser Grey Shrike, Red-rumped Swallow, Bluethroat, Common Rosefinch and Wryneck, all of which appeared on days with promising weather but few other common migrants. Realistically, I was thinking that we might find a Pied Flycatcher or a Redstart — two species that are great to see and always offer the hope that something better may be lurking around the next corner. 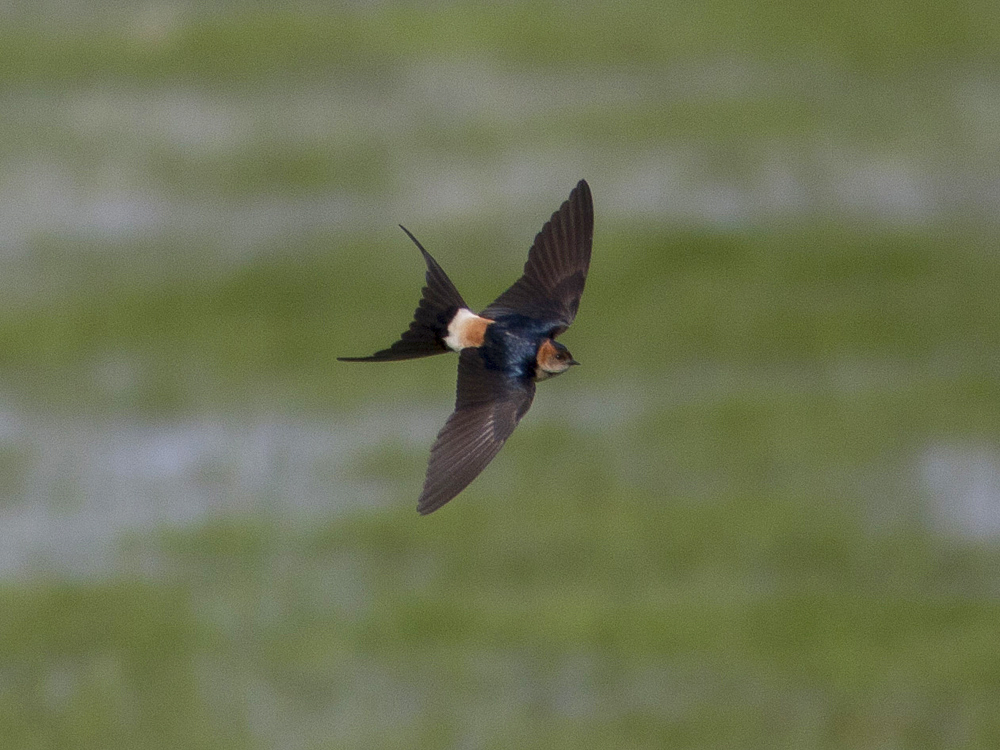 We arrived at the Tin Church and spent a couple of minutes wrestling with waterproofs before setting off on our walk. Being a creature of habit, I had a route planned in my head to take in the coastal scrub and headlands, hopefully intercepting any migrants that had been dumped by the rain. Just ten or fifteen paces from the car, Sean spotted a movement in the scrub behind the Tin Church. He was peering into thick cover, so I glanced along the fence line and bank of gorse opposite the church. With the naked eye, I spotted a black-and-white flash at the furthest corner of the field. Excellent — the male Pied Flycatcher I was hoping for, and the very first bird I looked at too! Lifting my binoculars to confirm the identification, I almost fell over when I was confronted by a large white collar! Sean had tracked down his bird and announced it to be just a skulking Blackbird. I simply screamed back "COLLARED FLYCATCHER ON THE FENCE!!!" 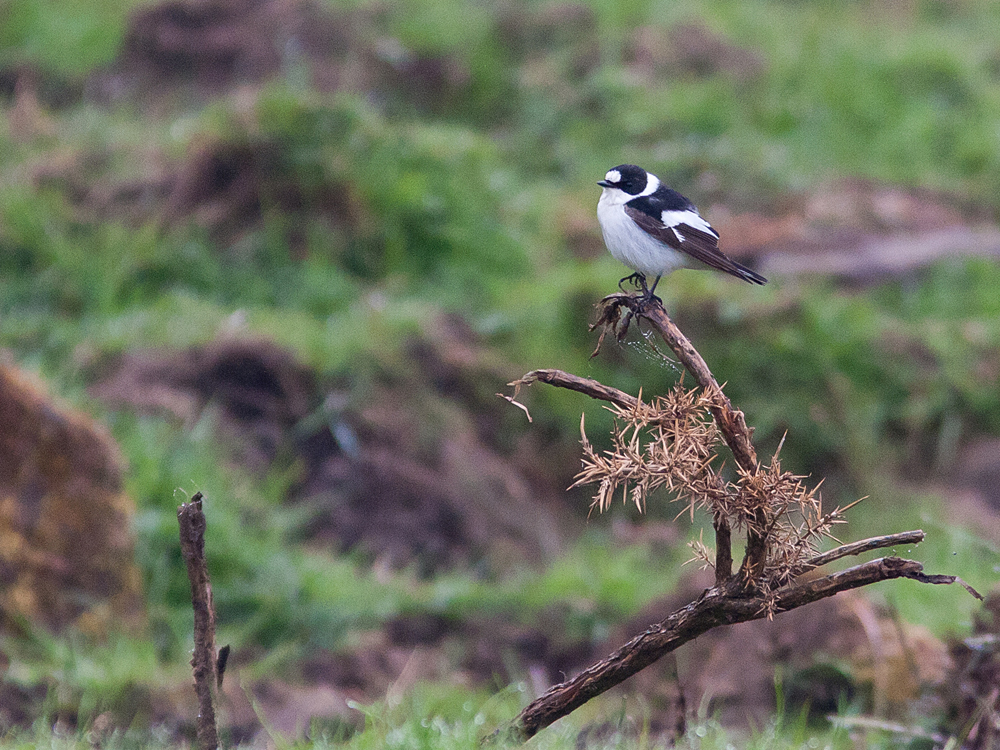 Initially, Sean thought I was joking. However, due to some expert use of expletives and the serious tone to my voice he quickly locked onto the bird in question...cue Sean joining me in the use of expletives! We were both in agreement that it was indeed a male Collared and thus hared back to the car to retrieve our cameras in order to secure some images and help confirm the record. The local landowners were quickly consulted, calls made, texts sent, and the news broadcast to BirdGuides. Within the hour most of Northumberland's keenest had arrived on the scene and were enjoying good views of the flycatcher. This bird spent much of its time foraging along a sheltered gorse bank bordering a private horse field, regular fly-catching sorties were made and it also dropped onto the ground in the field to take insects.

The bird had chosen the perfect location — plenty of roadside parking, easy viewing from the road with a solid fenceline and a field full of intimidating horses preventing anyone from getting too close and disturbing its routine. It continued to perform well until dusk and throughout the following day, when it delighted visitors from as far afield as Warwickshire and Cheshire. 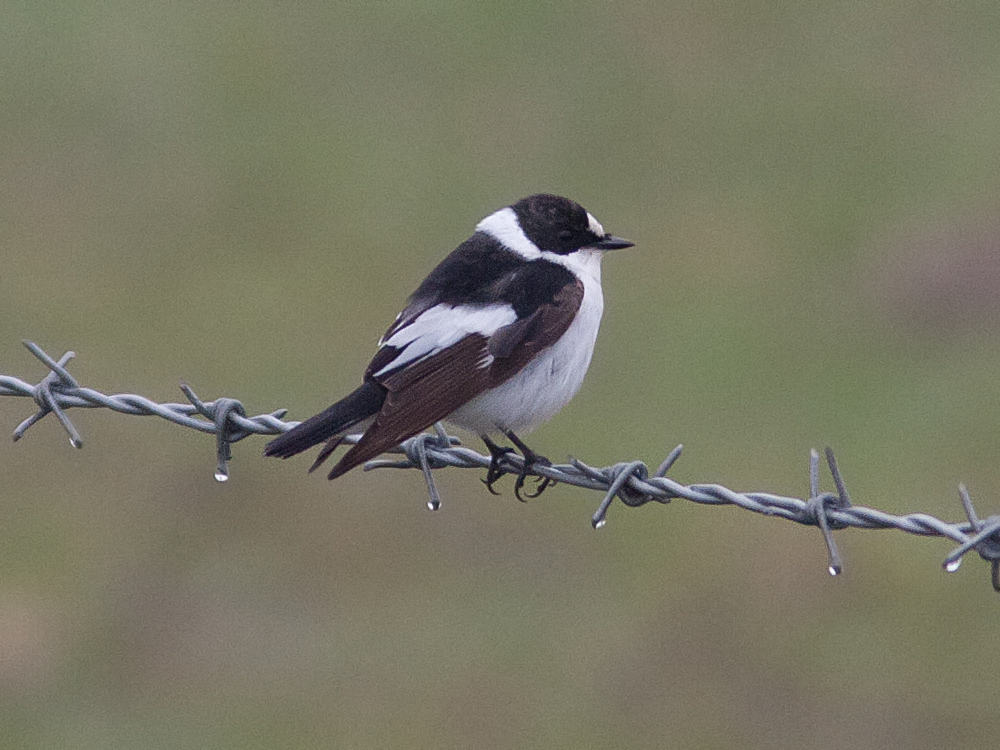 As we watched it feeding along the gorse bank I reflected on what was undoubtedly my jammiest birding moment ever, just a few steps from the car and the first bird we had seen. I guess that is one of the joys of regularly watching a local patch, you never know what might show up and, once in a while, you might just stumble into a 'heart-stopper'!