On Thursday 8 January, Davey Farrar was on his way out to Reenard for a spot of 'gulling' when he stopped at 'Mountain Stage', near Rossbeigh, and saw a scoter within a small Common Scoter flock that showed a lot of yellow on the bill. Deteriorating weather and distance made detail impossible to see, and on his return journey the bird was not visible at all in the driving rain. He did, however, ring me and describe what he had seen. When Davey says he has seen something unusual it is time to sit up and take notice, as evidenced by the long list of rarities he has found in Kerry of late: not least, co-finding the Stejneger's Scoter at Rossbeigh in 2011 (see an article on that bird here).

We (DF and MO'C) went back together the following morning and searched for the scoter flock. At first, we were searching for any scoter, as both gale-force winds and driving rain made the search extremely difficult, but as we made our way along the back roads bordering the bay, we finally located about 60–70 scoter, just a couple of hundred yards from the original site, almost obscured by swell, mist and driving rain. We set up telescopes, and it took several minutes before we both latched onto the 'yellow-billed' bird but, quick as it appeared, it was gone again, lost in the mist and swell. To add to the difficulty, many scoter were regularly diving and some were actually apparently sleeping while being thrown around like corks in the dreadful conditions. Hardy birds.

We eventually found a sheltered niche a little way up the nearby cliff that allowed at least occasional views of the flock as it appeared and disappeared in the huge swell, but wind-shake on the 'scopes and constant rain only allowed frustrating one- and two-second glimpses for the most part, sometimes many minutes apart. It was however, an immediately striking-looking yellow bill. Straining through the murk to relocate it each time would be accompanied to a mental soundtrack along the lines of "Is that it?... no. That one maybe?... no. JAYSUS! That's the one! Damn, gone again..."

We had been on the cliff for over three hours, and over that time we had begun to build up a fuller mental picture of the bird and were becoming increasingly convinced we might well be looking at a Black Scoter. Face on, the large area of yellow on the bill looked curved and even, like a small yellow or orange 'ball' stuck on the forehead — with no hint of a small 'knob' or bump along the bill's upper profile at any time. There seemed to be a neat black border below the orange, joining with a distinct and even black tip on the bill. We became increasingly sure that there was also a subtle but distinct difference in 'jizz', particularly a stockier build to the neck and head, making it overall a good bit 'chunkier-looking' than the nearby male Common Scoters. The head and neck looked slightly more akin to a Surf Scoter profile than a Common Scoter. Strangely, even with the brief snapshot views we were getting, we could see that the bird appeared to be regularly calling to other flock members nearby.

I returned to the car to get the camera, and tried to get photos during a brief lull in the rain, and a slight brightening. Even with a 420 mm lens, distance was such that the best we could do was for Davey to stay on the 'scope to announce, "Up now! 3rd bird from the left of the group of 8!", while I aimed at the group of 8, fired off a few photos and hoped for the best. Shortly after, the weather took a more serious turn for the worse, and the scoter flock disappeared into the mist and rain as they drifted further out and visibility decreased to around 100 m. We waited, but the short-range forecast was for worsening conditions so, cramped and soaked, we retreated to the car.

We were seriously considering that this might well be a Black Scoter — a first for Ireland — but if so, we'd better be able to prove it. The deteriorating weather and impending darkness meant we, or anyone else, were unlikely to see the bird again that day. There have been several claims of Black Scoter in Ireland before, and we knew that some had turned out to be Common Scoter with largely, or wholly, yellow bills, so we decided to each return home and make a few calls, and for me to check my photos to see if anything useful could be seen on those.

The first photos, taken in appalling conditions, were 'tantalising', though views through the telescope gave more detail.
(Photos: Michael O'Clery)

In due course, of the 40 or so photos, just three caught the bird, though they were disappointingly lacking in detail. I forwarded these to Killian Mullarney and Eric Dempsey, both of whom were encouraging about the identification as a Black Scoter, despite the poor photos. Killian commented: "it is difficult to reach a definitive conclusion on the evidence of the photos alone, but from what I can see they do indeed suggest a Black, and your impression of it looking good in the field is very significant."

The worry that this might turn out to be a hybrid or aberrant scoter prompted us to trawl the net for such examples, and to weigh any such examples against our impressions from earlier. See for example this one! 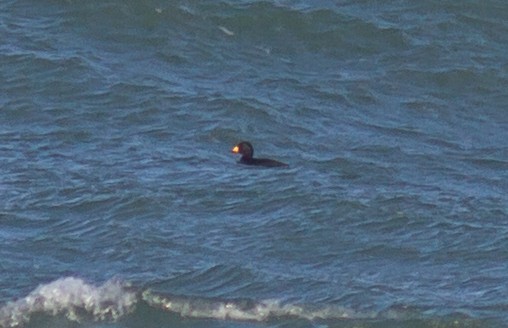 By Sunday morning, conditions were improving, and better photos were possible — further images can be viewed here (Photo: Seamus Enright) 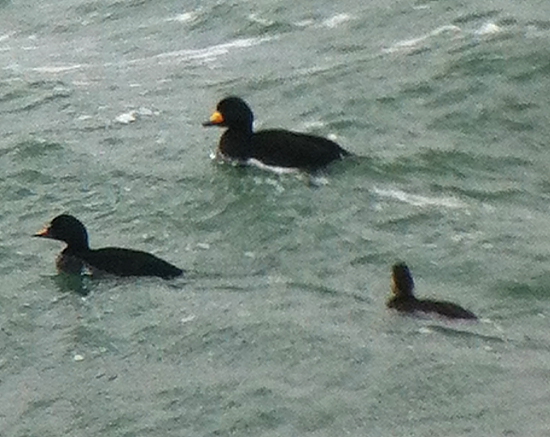 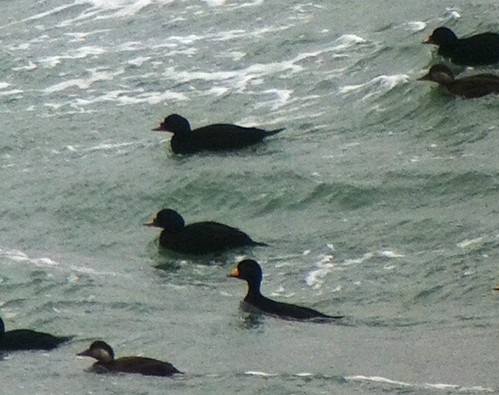 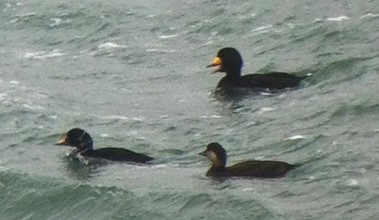 Three images taken in much calmer weather on 11 January. The bird was calling to other flock members quite frequently, as can be seen in the lower photograph (Photos: Aidan G Kelly).

Birders from all over Ireland made the journey to Rossbeigh in the following days and most, if not all, saw the bird first time if the weather behaved, though some needed a second go for more satisfactory views. The scoter flock at Rossbeigh, though small this winter (only around 30 birds in the run-up to Christmas, but now 60–80 birds), usually wander far and wide across the bay, sometimes a kilometre or more distant, so it was fortunate indeed that the flock remained within a small area close to the cliff near 'Mountain Stage' for so long. Ironically, the extremely stormy conditions which initially made the identification so difficult might have been the very reason the Black Scoter was close enough to identify in the first place.

Updates and more photos can be seen on the Kerry Birding Blog.