It's no secret that I'm a big fan of wild geese. This fascination really took hold in the 1990s when, having studied at art college, I returned to live in North Norfolk. Painting exclusively outdoors from life, I found the challenge of trying to capture the flocks of geese in their chosen landscape exciting. This, combined with a desire to correctly interpret and portray the complex behaviour of the flocks, provided a lifetime's worth of study. 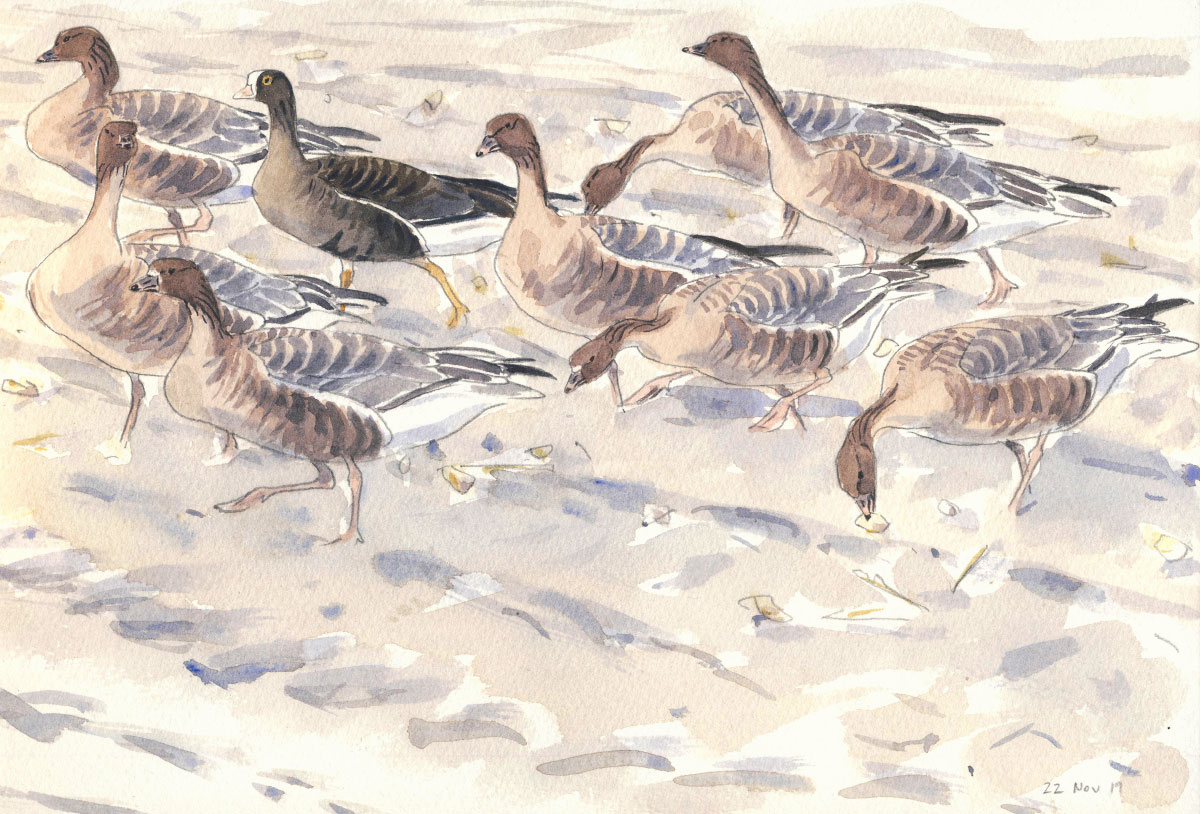 It was the large flocks of Dark-bellied Brent and Pink-footed Geese that predominantly caught my attention during the winter months. Although there was also a local flock of Russian White-fronted Geese, these tended to favour the less accessible grazing marshes. Regular observation of the traditional wintering species would occasionally reveal the presence of 'waifs and strays', which added yet further interest in watching the geese. In the decades that followed I'd discovered an exciting array of vagrant geese within my local goose flocks: Black Brant and Pale-bellied Brent with the Dark-bellied Brent flocks and, among the hordes of Pink-footed Geese, exotics such as a 'Grey-bellied Brant', Greenland White-fronted, Barnacle, Taiga & Tundra Bean, Ross's, Snow, Richardson's Cackling and Todd's and Lesser Canada Geese.

There are two additional species that I frequently daydream about chancing upon: Red-breasted and Lesser White-fronted Geese. I'd seen several of each locally over the years but to discover either species for myself was an exciting thought – though I realised that it would be a tough challenge. The last Lesser White-front I'd seen locally was in a flock of nearly 800 Russian White-fronts at Holkham back in 1997. With dwindling numbers of the latter species wintering in the area, and the wild population of Lesser White-front in steady decline, I felt that I'd probably missed the boat where this attractive small goose was concerned. But if there is one thing I have learned about the natural world that is to never say never ...

Each November I have an exhibition of paintings and this year it was held at my birthplace of Wells-next-the-Sea. The doors didn't open until 11am, which meant that if I got up at first light each day I could have half the daylight hours in the field before manning the show. Soon after dawn on 21 November I was driving westwards through the coastal farmland when I encountered a steady stream of Pink-feet passing south-east over Stiffkey and dropping in to land near Binham. As I approached the area in which they were settling I quickly realised that there was no easy way to view the birds so instead I followed another series of flocks to Field Dalling.

Just as I neared the village the flock was disturbed and a good proportion of the birds seemed to drop down in fields between Saxlingham and Thornage. Arriving at the general area it was clear that this group had also landed in a difficult-to-view field. By this stage of the morning I was getting pretty frustrated as the clock was ticking and I'd ended up driving in the exact opposite direction to the exhibition venue. My objective now was to simply 'lose myself' watching Pink-feet for an hour or two before duty called. So, as there appeared to be nobody around, I decided to sneak along one hedgerow then halfway up the next to view the geese.

"I momentarily caught a glimpse of what appeared to be a small, dark goose with a white forehead blaze which seemed to terminate on its crown in a sharp point."

I was pleased with my fieldcraft as I had managed to approach the geese without flushing them, but they certainly knew I was there as all the birds had their heads up and had instinctively turned into the wind before they began to relax once more. Just before they settled, at the back of the flock, I momentarily caught a glimpse of what appeared to be a small, dark goose with a white forehead blaze which seemed to terminate on its crown in a sharp point. The impression it gave, although brief, was very reminiscent of a Lesser White-front, but I didn't allow myself to become too hopeful as in recent winters I'd had false alarms caused by dainty-looking Russian Whitefronts with extensive white on their foreheads. Even so I was very keen to see the bird once more and the three or four minutes before I glimpsed its head again felt like an age. Again it was the briefest of views but I couldn't hold back a surge of excitement for I was sure that this bird had a prominent yellow eyering!

At last the bird raised its head once more to reveal the presence of a prominent yellow eyering ...

It seemed like an eternity before it raised its head once more. Initially I was seeing just fragments of the bird among the Pink-feet but eventually it walked into an open space between its companions and then I was left in no doubt as to what I was looking at. It was a very attractive bird, pleasingly small, with characteristic restricted dark bars on the lower belly and noticeably long primaries. I was most struck by how dark the plumage was. It was noticeably darker than a Russian White-front and to my eye it appeared as dark as a Greenland White-front – and shared a similar blackish tail with a narrow white border. The white border to the flank was thin and delicate compared to that of its larger cousin. My attention then went to checking its legs for any signs of rings that may point towards a reintroduction scheme or captive origin but, from what I could see, the legs were clean.

Suddenly the goose along with a handful of Pink-feet became very alert and started flicking their heads before taking flight and disappearing over the hedge into the neighbouring field. The exciting encounter had ended all too soon and I was left feeling slightly frustrated but quickly turned my attention to scanning the other geese just in case they decided to follow suit. I was pleasantly surprised to see a neatly patterned adult Barnacle but was then completely taken aback to see an American vagrant in the form of a rather smart Todd's Canada Goose, quickly followed by a lovely pair of Tundra Bean Geese – I struggled to comprehend my good fortune!

But to my horror the feeling of euphoria was countered by the noise of a diesel engine and the sight of a pick-up truck progressing along the bottom edge of the field. I froze, hoping that I wouldn't be spotted through a gap in the hedge. The truck passed the gap, maybe I'd got away with it I thought, but then came the sound of brakes, the clunk of a gear change followed by the whine of the reverse gear being engaged ... I'd been rumbled. I flinched as the local gamekeeper approached and the geese took flight. I was completely in the wrong and was quick to admit it but he turned out to be a really nice bloke and we chatted for a while. I left, however, clearly knowing that I was somewhere I shouldn't be and there was no opportunity of me or anyone else returning there to view the geese. In all the drama I'd almost forgotten about the exhibition so dashed back to the car then set off cross-country towards Wells.

The morning's goose extravaganza wasn't quite over for, on approaching Binham, I pulled into a gateway to let a tractor and trailer past and in doing so chanced upon a flock of Brent Geese. A quick scan produced two adult Pale-bellied, a hybrid Black Brant and a very striking adult Black Brant! What an amazing morning and after all the excitement I was only 10 minutes late to open the gallery. 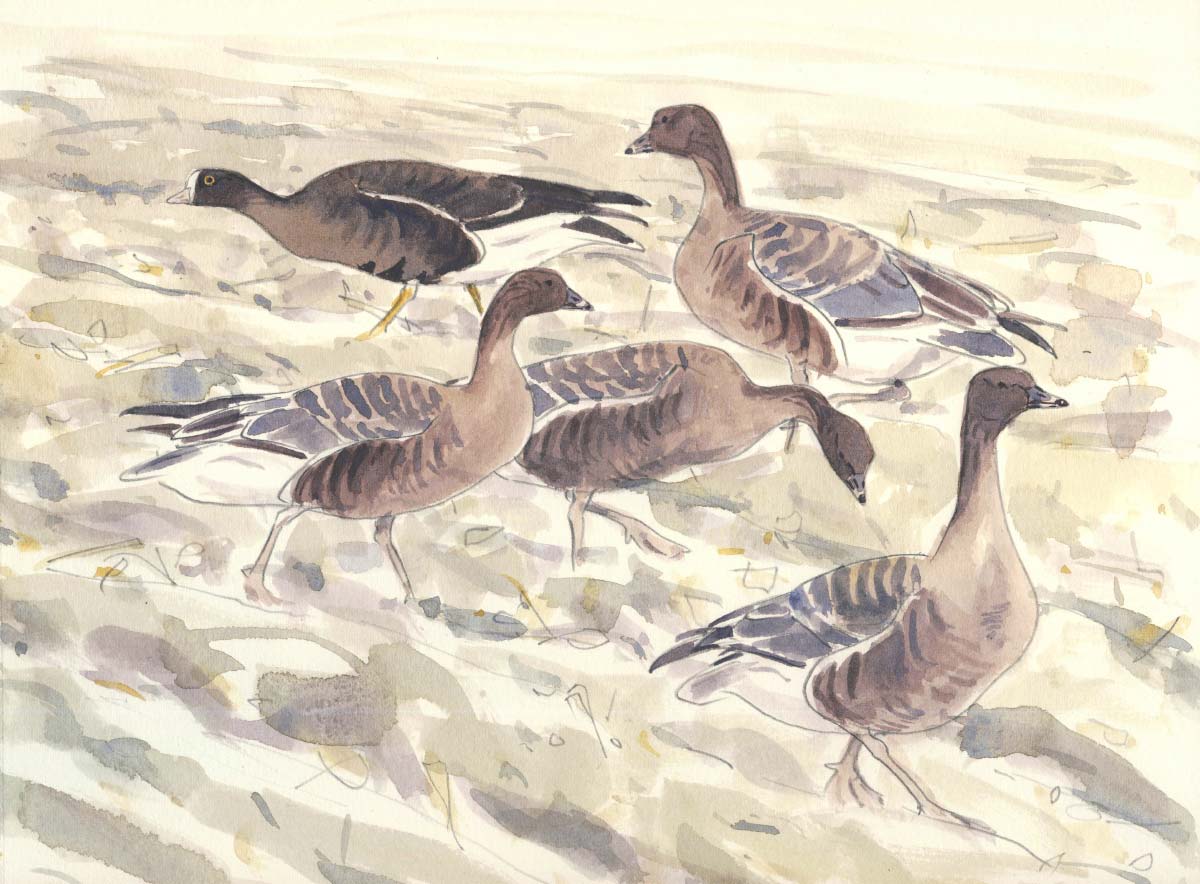 It was a very attractive bird; pleasingly small, with characteristic restricted dark bars on the lower belly and noticeably long primaries.

The following day, 22 November, I was up at first light as I was keen to re-find the goose then work out how best to view it before releasing the news. I checked the general area to find no sign of any geese. A friend of mine, Kayn Forbes, had contacted me to say that he was out looking for geese in north-west Norfolk, so I suggested that he came to this area first then work his way westwards. He did just that and to his credit he soon phoned back to say that he'd picked up the Lesser White-front near Field Dalling. I dashed over for a quick look before I was back on exhibition duty. Kayn had obtained some photos and had seen the legs clearly and agreed that there was no sign of any rings.

This site was easy to view from a public bridleway and there were parking opportunities in the village so we decided to put out the news to a wider audience. We'd no sooner agreed on this when a farm worker arrived and explained that he had come to scare off the geese as they had been grazing the winter cereal and eating unharvested sugar beet that was still in the ground. It was such frustrating timing for as the news was released a string of loud fireworks was ignited and the geese disappeared en masse towards Holkham.

It is interesting to note that at the same time as the discovery of the Lesser White-front, a significant arrival of Russian Whitefronts and Tundra Bean Geese took place along the east coast of England. Indeed, on 22nd, 20 White-fronts and six Tundra Bean Geese appeared in the same flock of Pink-feet as the Lesser White-front. Forty White-fronts were seen coming in off the sea at Holkham and smaller groups were seen arriving in off the sea in East Norfolk. This arrival of geese coincided with a large high pressure system over Scandinavia which in turn created a strong easterly airflow through Eastern Europe and into the Low Countries.

There is, of course, always a need for caution where records of wildfowl are concerned. However, the circumstances surrounding the discovery of this bird, especially during an influx of other Old World grey geese and the fact that the bird carried no rings, support the notion that this was a wild vagrant. Certainly in the modern era this is the ideal scenario for the arrival of a wild Lesser White-fronted Goose to Norfolk.

James McCallum is an artist based in North Norfolk and is best known for his watercolour paintings of the natural world, particularly birds, made outdoors from life. Visit his website to find out more: www.jamesmccallum.co.uk 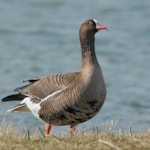