Among the many highlights of October are the rarer Phylloscopus warblers. Although the multi-striped Yellow-browed and Pallas's Warblers invariably steal the limelight, this is also the time to search for their drabber – though still very desirable – Siberian congeners: Radde's and Dusky Warblers. Among the more regular Common Chiffchaffs, that subtle subspecies known as Siberian Chiffchaff is also something to look out for. Andy Stoddart provides you with all the information you need to pick out each of these birds should you discover one in the field. 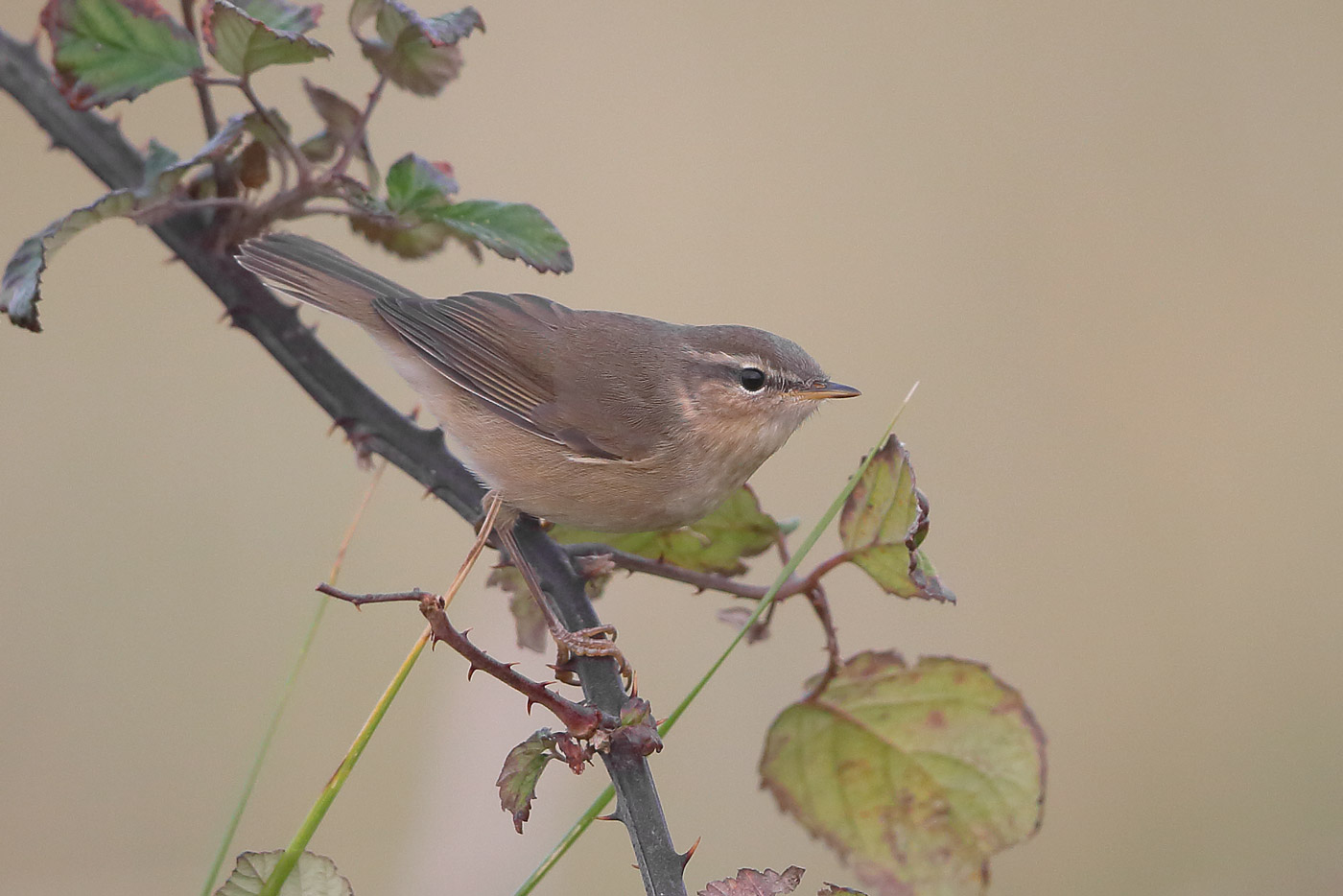 This species breeds across southern Siberia and the Russian Far East and winters in South-East Asia. Though first recorded in Britain at North Cotes, Lincs, in 1898, there were no further records until the 1960s. Since then it has become an expected autumn visitor and today is recognised as a regular rarity, occurring in some numbers in some years; it was dropped from the British Birds Rarities Committee's list in 2005.

Radde's occurs exclusively in late September, October and early November and is unknown outside this period. Records come largely from the east and south coasts although, unlike many Siberian species, there is no Northern Isles bias, with most occurring further south.

This is a highly skulking species, extremely adept at hiding in thick cover. When seen, it is a sturdy, thickset Phylloscopus with a somewhat atypical structure which comprises a rather large head, a shortish rather tit-like bill, a large eye and a solid, broad, deep-bellied body. It has a short primary projection, a longish, slightly round-tipped tail and long, stout legs with large feet.

Its plumage is a muted olive above, with a warm yellow-buff suffusion below, richest on the vent and undertail coverts. The face pattern comprises a long, strong supercilium, broad and buff in front of the eye – over rather weakly marked lores – and narrower and whiter behind. The legs are a strikingly bright pink.

It is often silent, but a characteristic chet chet or wit wit may draw attention to its presence.

First recorded in Britain at Auskerry, Orkney, in 1913 and then not again until the 1960s, Dusky Warbler long mirrored the occurrence pattern of Radde's Warbler. However, in recent years it has outnumbered its cousin and it too was dropped as a national rarity in 2005. Occurrences are similarly from late September onwards, but continue throughout November.

In addition, wintering birds – which favour wetland edge habitats – have become relatively frequent and there is also a scattering of spring records. Autumn birds are spread all along the east and south coasts, while wintering birds can occur anywhere, including inland, but particularly in the milder climes of the South-West.

This is also a highly skulking species, but is more vocal than Radde's Warbler, often betraying its presence with a sequence of clicking tek tek calls. It has a stiff carriage and a nervous, neurotic demeanour, combining calling with restless wing-flicking.

When seen, it has a more conventional Phylloscopus structure, more closely resembling Common Chiffchaff, although the tail corners are slightly rounded. However, it is readily distinguished by its dull brown upperparts, grey-brown underparts and sometimes slightly more richly coloured vent and undertail coverts.

The face pattern is strong, with a long, narrow supercilium, which is white in front of the eye and more buff behind. It has a rather intense facial expression, a function of a more solid dark loral line. The legs are orangey, a further distinction from Common Chiffchaff.

This species has a large Palearctic range, extending from western Europe to eastern Asia. It winters in southern Europe, north Africa and southern Asia.

This is the familiar, common migrant warbler of late autumn, easily recognised by its drab olive and dull yellow appearance. It has a relatively weak facial expression dominated by a prominent eyering, as well as dark legs and a habit of constant tail-dropping.

This subspecies (hereafter tristis) breeds from the Urals eastward across Siberia and winters predominantly in India. It occurs as a regular scarce migrant mainly on east and south coasts in October and November, but also winters in small numbers in southern England and the South-West. There are a number of spring occurrences too.

'Classic' identification features include brownish hues in the upperparts, with green confined to the scapulars, rump and wing and tail feathers, a lack of yellow in the face and underparts, a fairly prominent supercilium but a rather weak eyering and very black-looking bare parts.

However, birds from the western part of the range (immediately to the east of the Urals) can show some limited green in the crown and mantle and yellow in the supercilium and underparts. Such birds have traditionally been considered to form part of the range of variation of tristis rather than being an indication of intergradation with abietinus. Intergradation between abietinus and tristis has been documented west of the Urals but is thought to be limited in its extent.

The call of tristis is very different from that of collybita and abietinus – a quiet, plaintive, piping iiiihhp, a bit like a Dunnock or a Bullfinch, and often likened to a lost chicken. The song is very distinctive too, a hurried collection of notes in contrast to the familiar metronomic song of western birds.

The plumage features noted above represent our traditional understanding of how to identify tristis. However, recent genetic analysis of a number of trapped 'eastern chiffchaffs' in The Netherlands has shown that birds considered to be abietinus (based on the above plumage criteria) had the DNA of tristis. This implies that the plumage limits of tristis might previously have been underestimated. Quite what such findings mean for how we record these birds in Britain remains to be seen. 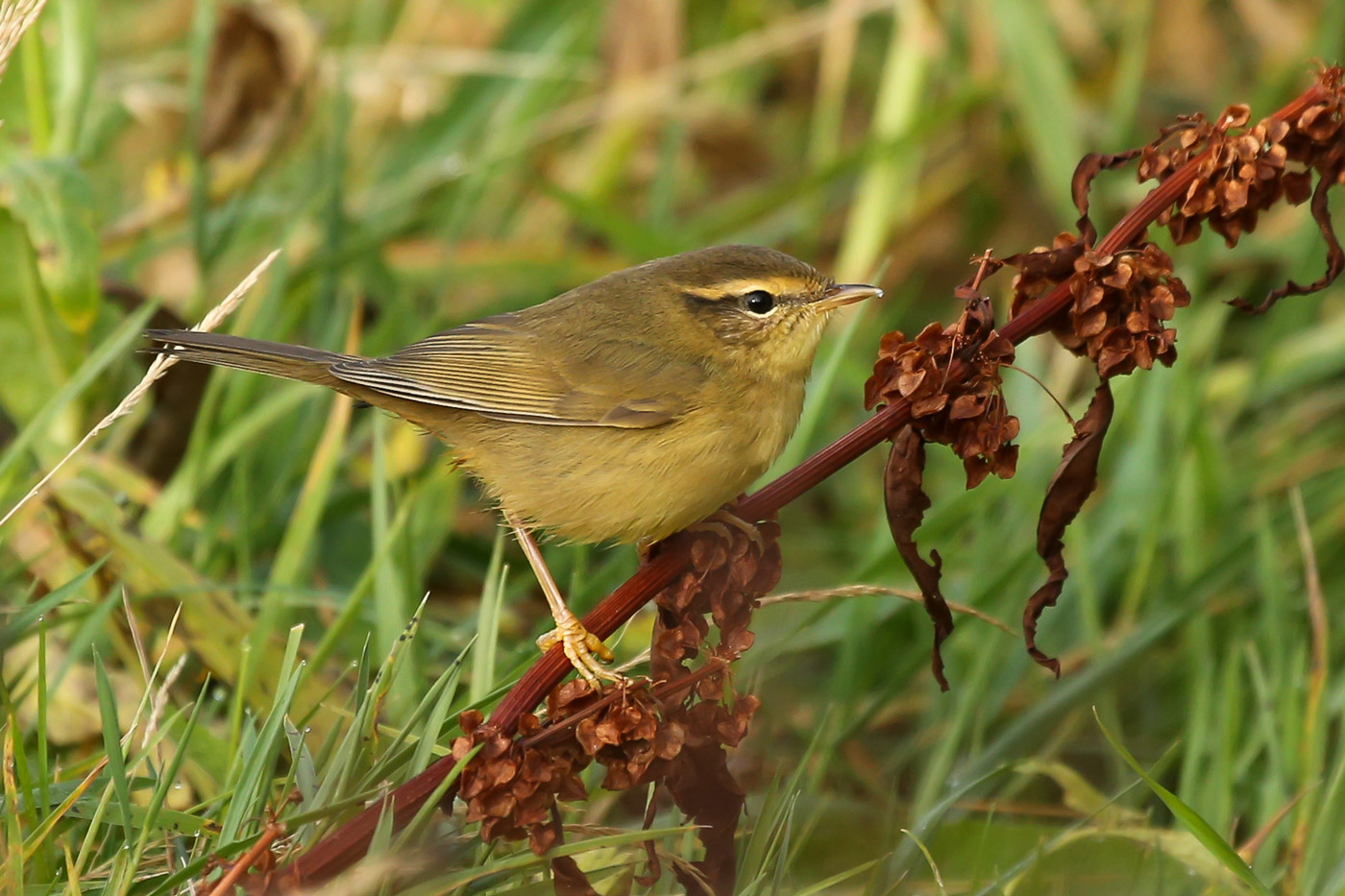 Radde's Warbler (Fair Isle, Shetland, 16 October 2015). This bird appears superficially similar to the Dusky Warbler in image 1, but looks a little more solid headed and stout bodied, with a slightly longer tail, while the bill and legs appear quite thick. The plumage is strikingly rich olive above and extensively washed yellowish below, this colour extending onto very richly hued vent and undertail coverts. The supercilium is strong and noticeably broad before the eye, while the loral line is rather weak (Lee Gregory). 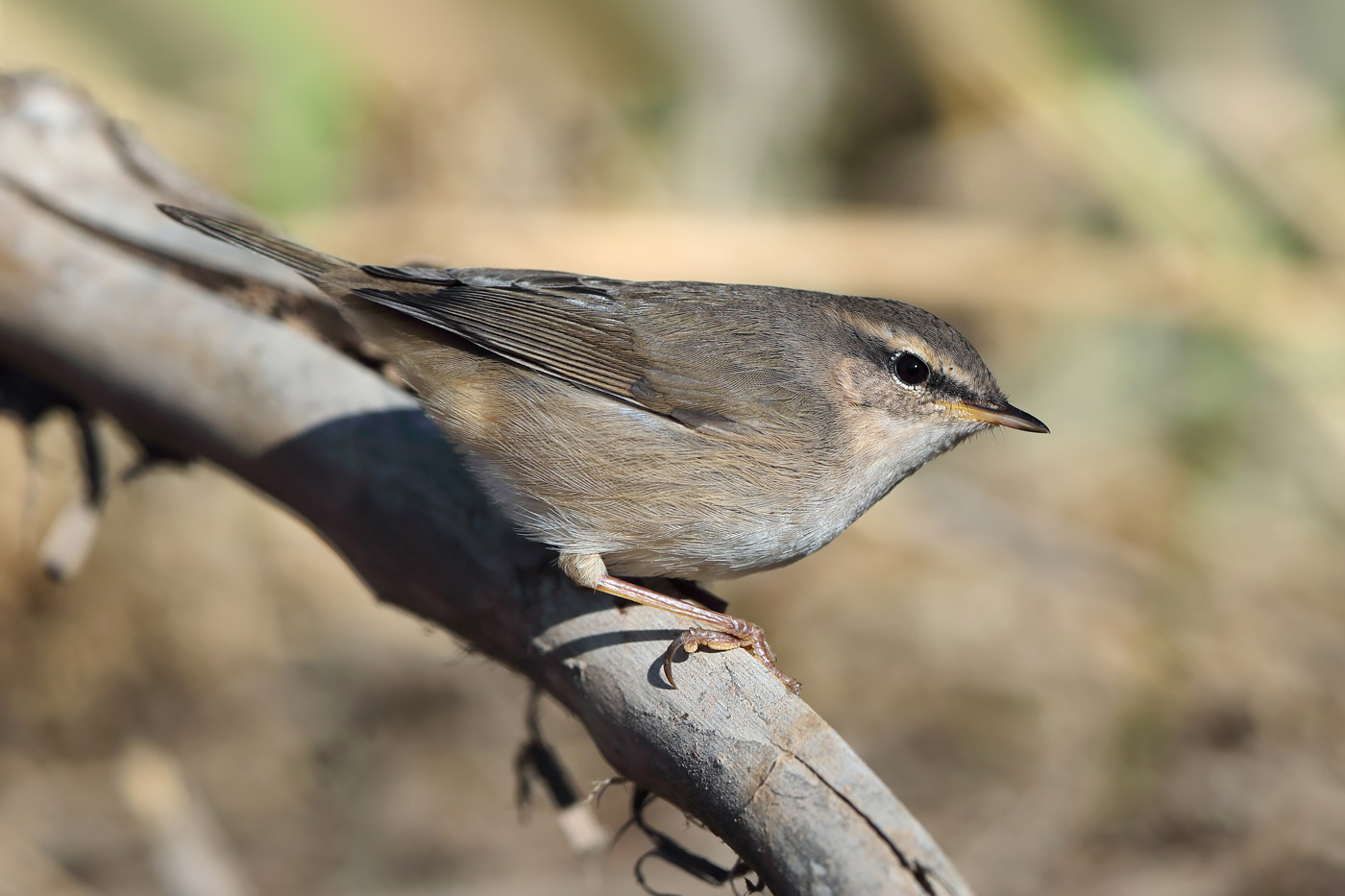 Dusky Warbler (Ongi Valley, Mongolia, 13 September 2019). Unlike Common Chiffchaff, Dusky Warbler often has a rather stiff carriage and a somewhat 'neckless' appearance, a 'look' captured well here. Note also the slim bill, rich brown plumage and a striking face pattern comprising a long but narrow supercilium (slightly more buffy behind the eye than in front), a strong dark loral line and a white lower eyering. The bill has extensive orange in the lower mandible and the legs are also subtly orange (Aurélien Audevard). 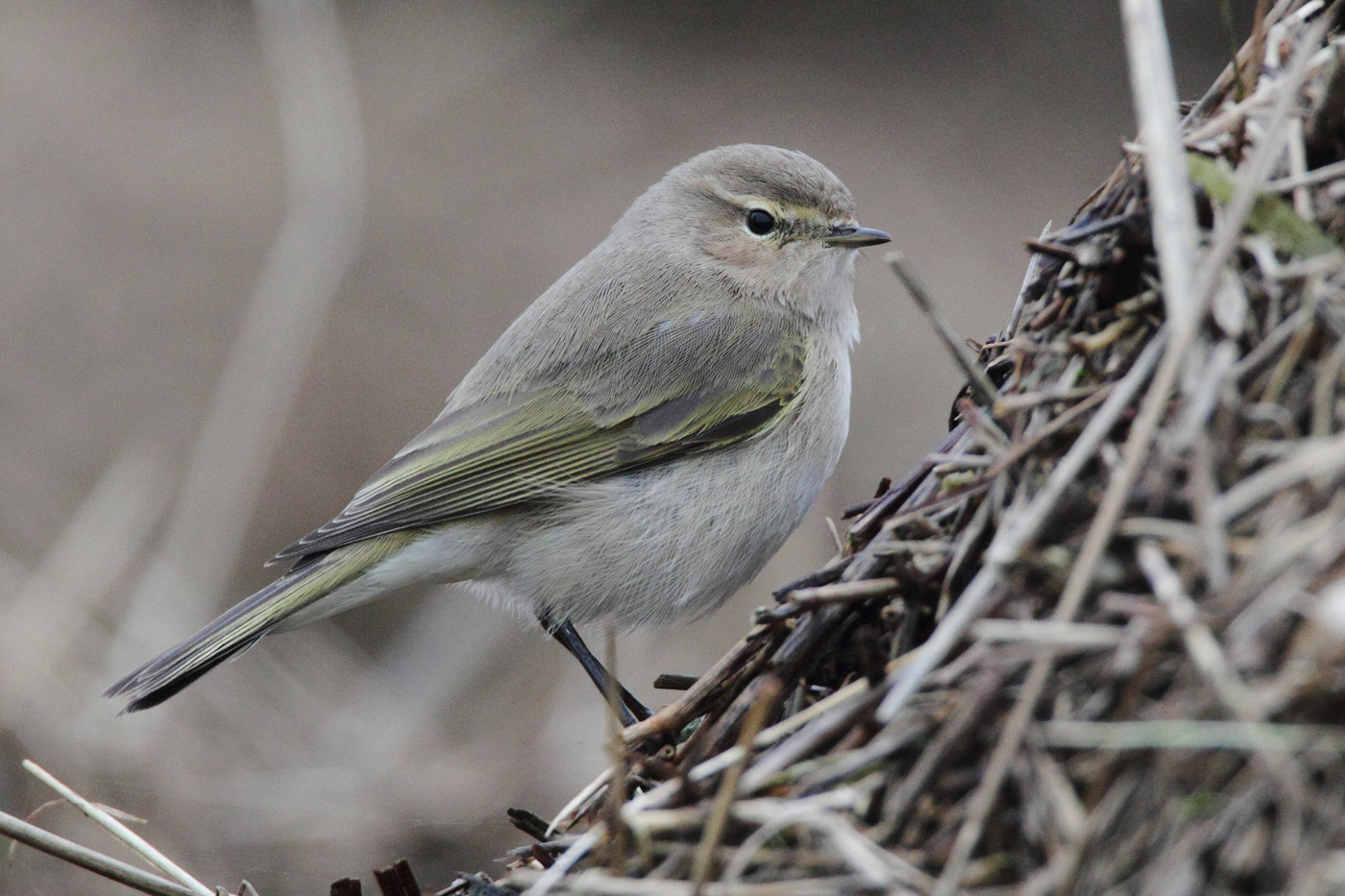 Siberian Chiffchaff (Burton Marsh, Cheshire, 12 January 2014). The combination of soft pale brown upperparts (lacking obvious green in the crown and upper mantle), whitish underparts (lacking yellow) and green fringes in the wing and tail is typical of Siberian Chiffchaff. The face pattern is also rather strong for a Common Chiffchaff (but less so than a Dusky Warbler), the prominence of the eyering is reduced and there is a rather 'warm' brownish tinge to the ear coverts. Note also the very black-looking bill and legs (Jim Almond). 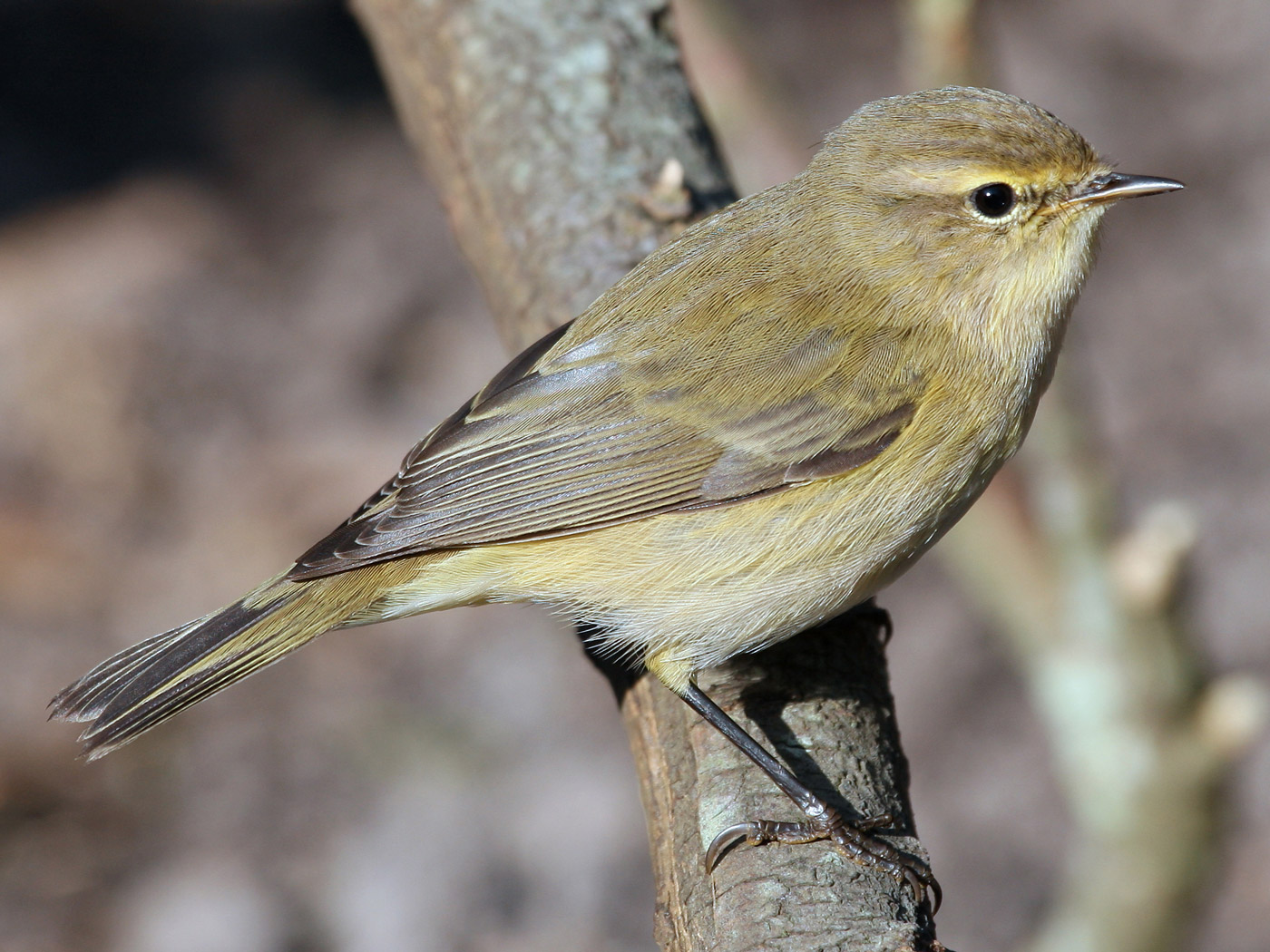 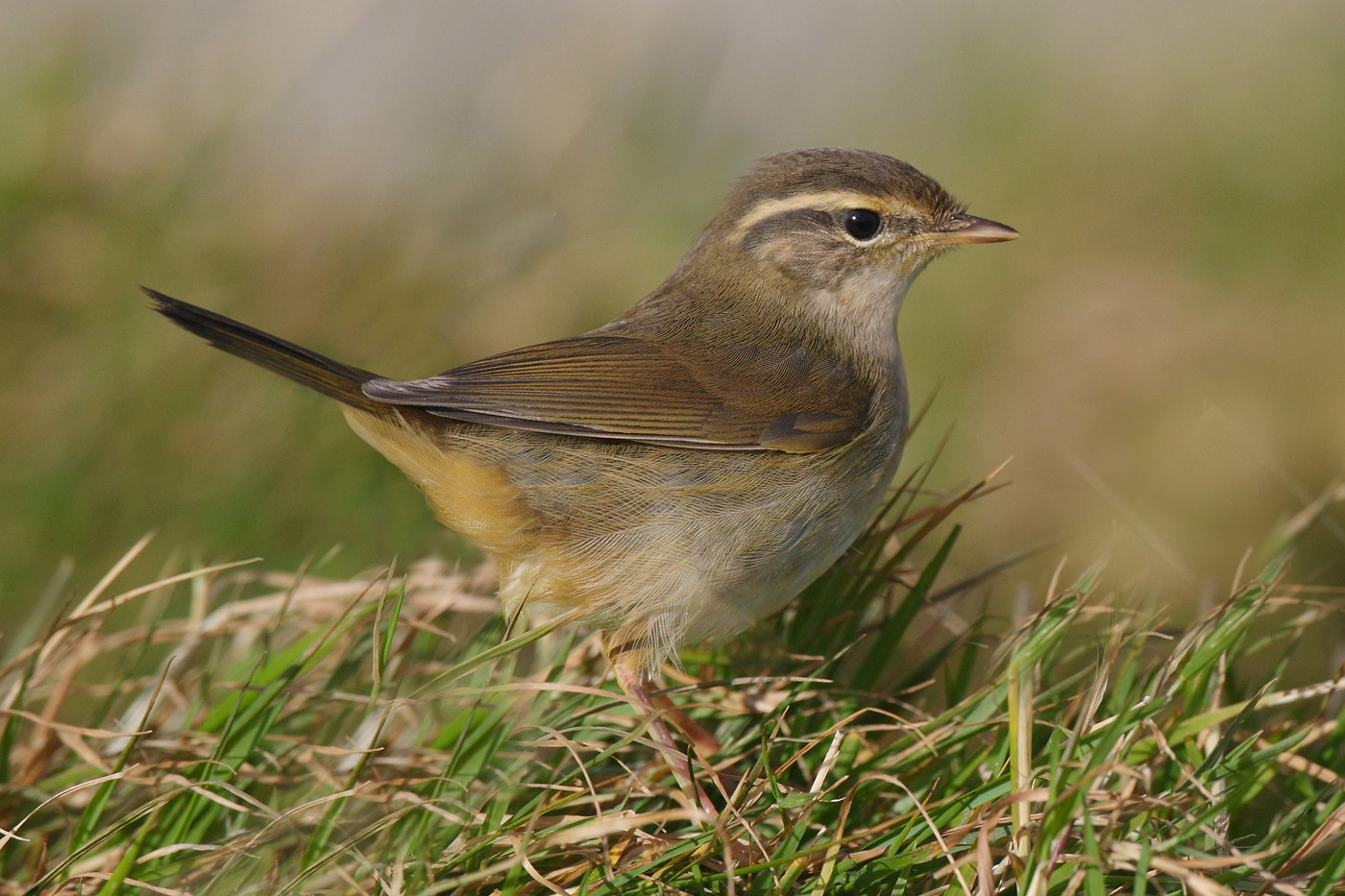 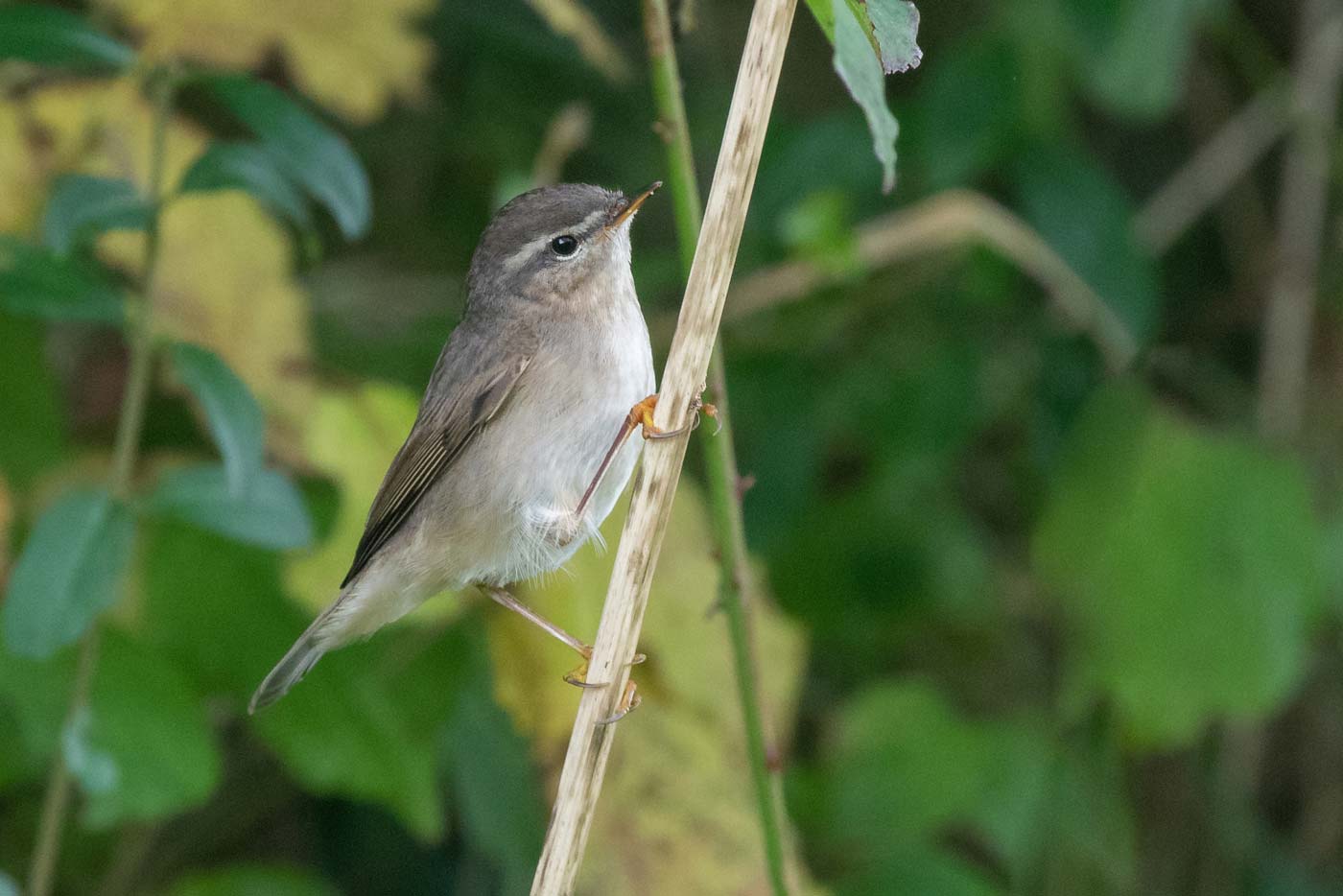 Dusky Warbler (Katwijk, The Netherlands, 20 October 2019). The brown plumage, strong face pattern and neat, slim proportions immediately suggest that this bird is a Dusky Warbler, an identification readily confirmed by the characteristically 'intense' face pattern and orangey legs. The flanks and undertail coverts are only lightly washed with buff (Arnold Meijer / www.agami.nl). 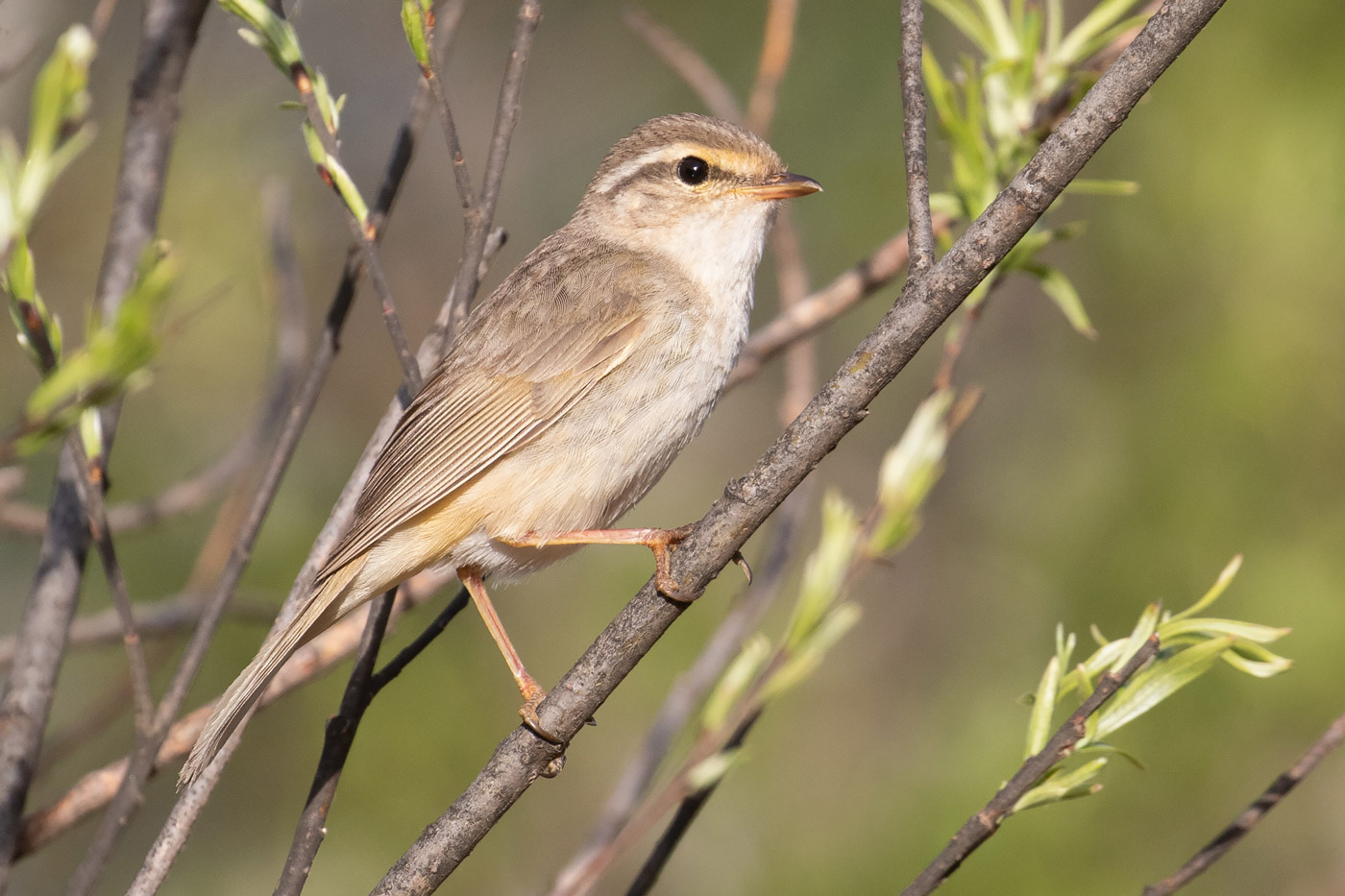 Radde's Warbler (Wuerqihan, Inner Mongolia, China, 5 June 2019). Radde's Warbler is unknown in Britain in spring, but is included here for the sake of completeness. It looks a bit 'scruffy' compared with its fresh autumn appearance. The typical structural and plumage features can be seen here, although the whole appearance is a little more dull and faded (Josh Jones / www.joshrjones.com). 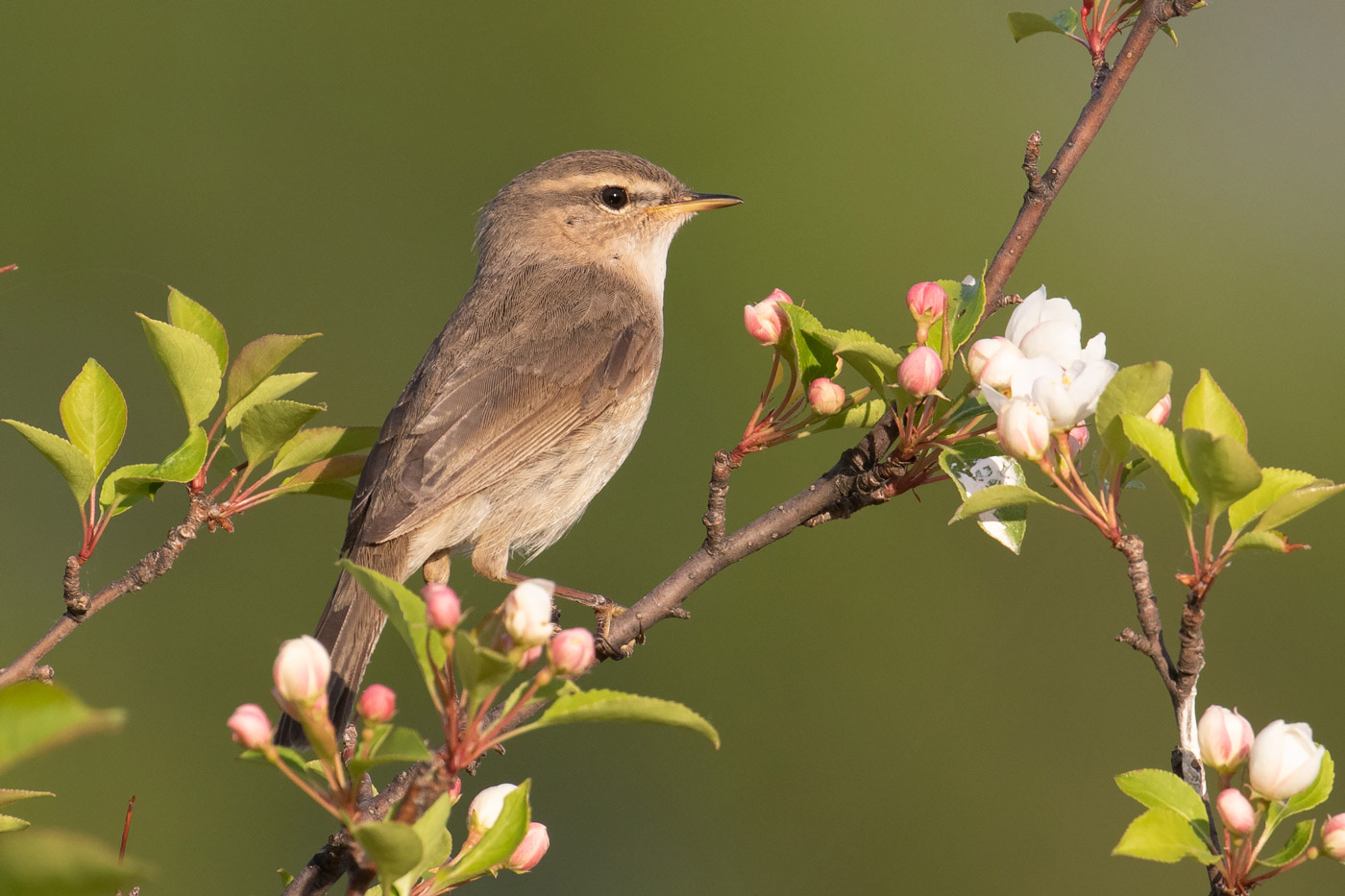 Dusky Warbler (Wuerqihan, Inner Mongolia, China, 6 June 2019). Dusky Warbler is an increasingly regular winterer in Britain and as a result spring records are on the rise. Spring birds are a little more worn and 'scruffy looking' than pristine autumn birds, but the basic suite of structural and plumage characters still holds good (Josh Jones / www.joshrjones.com). 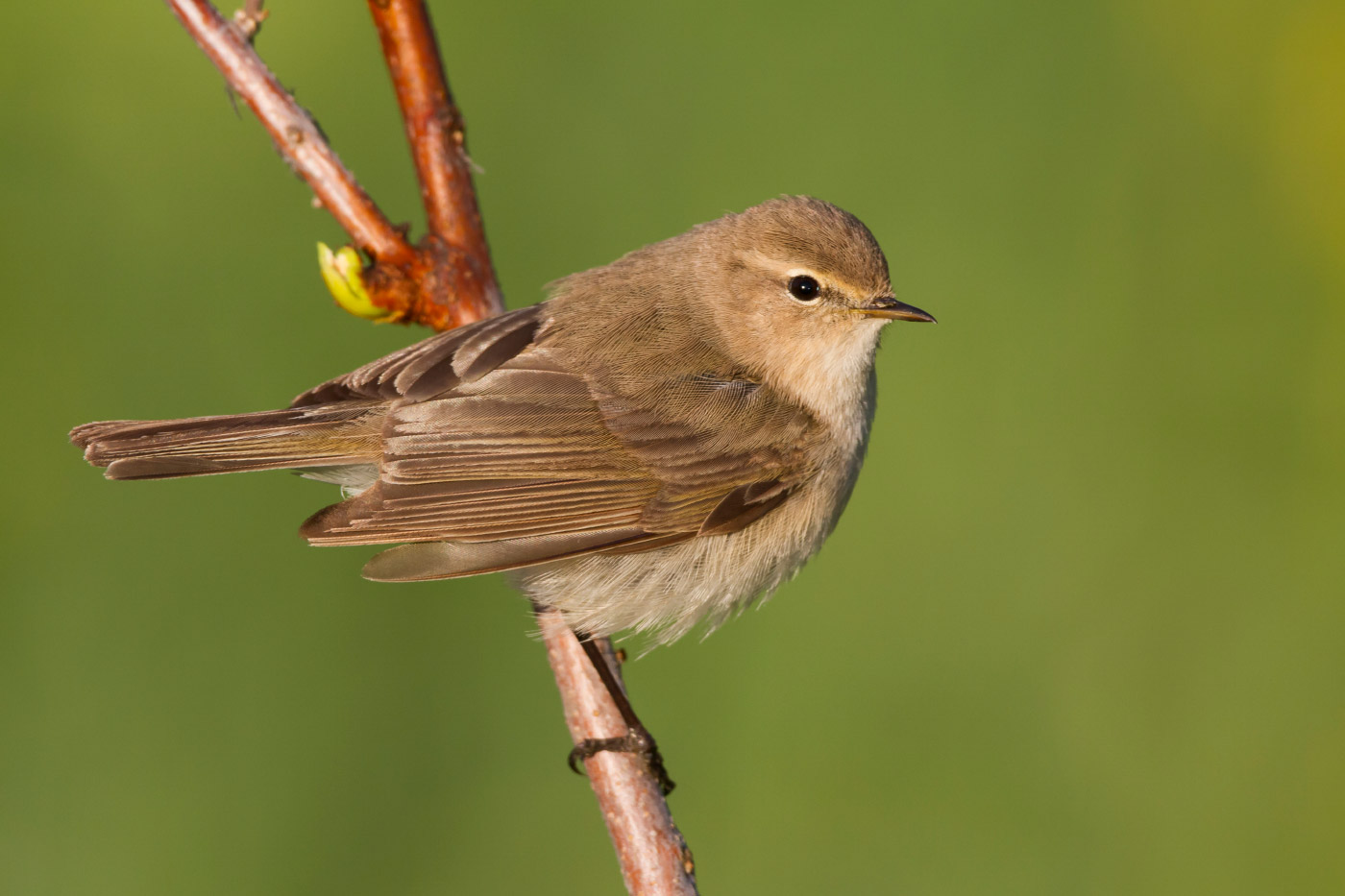 Siberian Chiffchaff (Kazakhstan, 31 May 2014). This spring Siberian Chiffchaff looks basically brown and might suggest a Dusky Warbler more than a Common Chiffchaff. However, note the only moderately prominent supercilium, subtle green hues in the wing and tail feathers and, of course, the typically black legs (Ralph Martin / BIA). 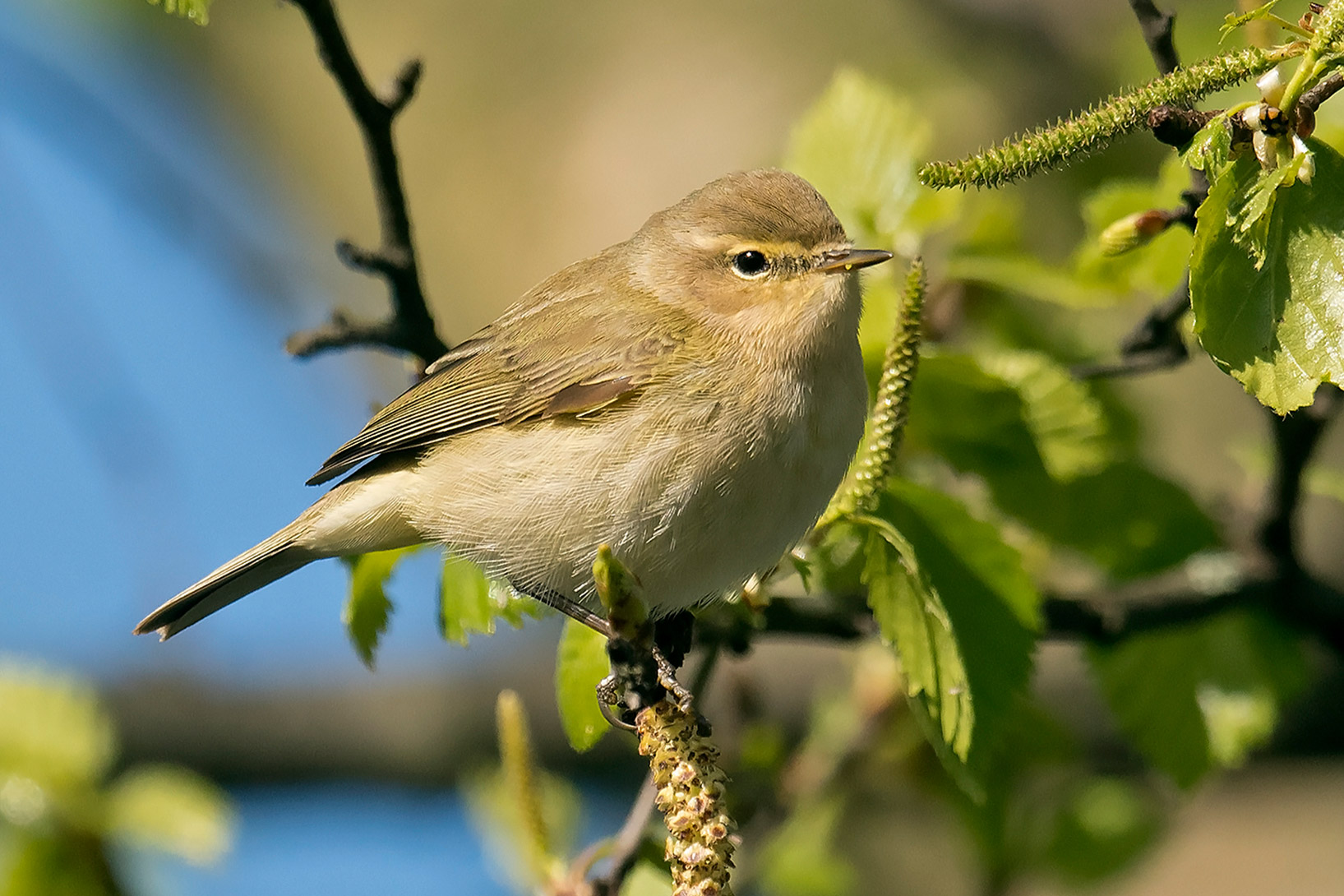 Common Chiffchaff (Roby, Liverpool, Lancashire, 14 April 2020). Spring Common Chiffchaffs tend not to look too tatty, as evidenced by this bird. The strongly olive and yellow hues are again clear here, as is the rather bland face pattern (a function of the weak supercilium and strong eyering). The dark legs are readily apparent, too (Steve Young). 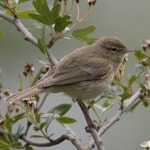 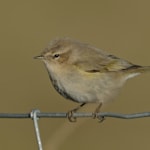 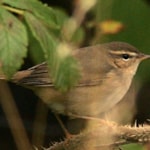 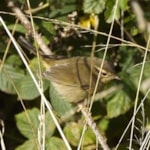