This birding outing on the evening of Wednesday 26th June resulted from a brief phone call from a friend, Mick Brennan. We discussed potential venues and decided upon Frodsham Marshes as neither of us had visited this site for several weeks and there is usually something of interest around.

We arrived at "No. 6 Tank" at around 1900 hrs, hoping to see some waders, or possibly an egret. However, the tank was virtually birdless, except for a few Mallards, Teal, Tufted Ducks, Lapwings and hirundines with Swifts – not even a godwit or Dunlin, which are normally present! After about 20 minutes, I started scanning the surrounding field, patiently searching through the Starling flock in hope of something 'pink' and exciting, but the flock were proving hard to see in the longish grass. 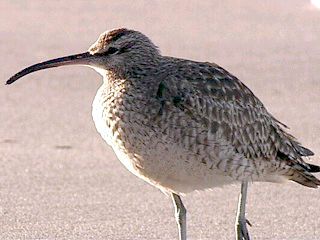 After a few minutes of searching, I noticed a largish wader with decurved bill flying roughly west alongside the chemical works. I looked at it through the bins and immediately called "Whimbrel, flying right" as it looked smaller and darker than Curlew, complete with the distinctive jizz of the smaller species. After an instant, I realised that there was no evidence of any white on the rump! During the excitement of the next few seconds, I remember shouting at Mick to check out the rump colour of the bird in front of us and also asking him what colour a Whimbrel's rump was! Through the telescope (Kowa 823, 30WW), the dark rump and back were clearly evident, a fact confirmed by Mick. Unfortunately, the bird dropped down out of sight and we thought that was the end of it – we were worried that we had not seen it long enough or sufficiently close to eliminate a "dodgy" Curlew or Whimbrel. Luckily, it reappeared and flew southeast towards us, giving clear views of the uniform dark upperparts, including back and rump (forewing darker), all features consistent with Hudsonian Whimbrel! After having observed this bird for about 3 or 4 minutes, it pushed on further southeast, only to be lost from sight somewhere between the far bank and the M56. We searched for a while after, but the weather changed to heavy rain, rendering observation difficult. However, we did find 5 Curlews, all in flight with clear white rumps and backs visible even in the rain at a few hundred yards.

After leaving the site, I literally pulled all the standard texts off my bookshelf – Shorebirds, Rare Birds and the new Collins Guide – to check if this could have possibly have been something else, but all features we observed pointed towards Hudsonian Whimbrel, with any possible confusion species being highly unlikely due to larger (Far Eastern or Long-billed Curlews) or smaller size (Little or Eskimo Curlews!).

Certainly far more excitement than we anticipated that evening and easily the rarest find either of us has ever had.

Several dark-rumped Whimbrels have been reported in Britain over the years, including a bird in North Yorkshire at the end of April. Despite the most likely option that they were indeed Hudsonian Whimbrels, only those that remained long enough for a detailed description of features such as the head pattern and underwing to be taken have ever been accepted by the British Birds Rarities Committee.

Mike's account illustrates the excitement generated by finding one's own rare birds, a pursuit which is wholeheartedly encouraged by BirdGuides. We take no part in the judging of records, and encourage birders to submit detailed descriptions to the BBRC and county recorders of rarities.

There have been five accepted records of Hudsonian Whimbrel for Britain and Ireland, the last was one at Goldcliffe Pools in Gwent from 6th-7th May 2000; this bird was also seen at the site on 3rd and 4th May 2002. In addition, there have been Western Palearctic records from the Azores and Cape Verde Islands. Eds
Written by: Mike Anderson