Patchwork Challenge 2015 is here! A warm welcome to all patchers old and new. January is always an exciting month where the slate is wiped clean and we can all start again. 2014 was a fantastic year but 2015 promises to be bigger and better than ever, with upwards of 470 patches registered.

Wildfowl are always a key element of the first month of PWC, and many patches scored points with some of our scarcer visitors from overseas. North America was well represented, with Green-winged Teal on a number of patches and the Ring-necked Duck from 2014 holding on in Tiree. Another long-stayer was the Surf Scoter at Stutton, while the Maenporth King Eider was scoped from Dan Chaney's Falmouth patch. The returning White-billed Diver was an excellent record at Quoyangry, Orkney. Putting these into the shade, however, was the duck that has become a minor celebrity in Scotland — the Harlequin Duck on the River Don put in an appearance at Donmouth for Andrew Whitehouse, unsurprisingly a new bird for PWC. 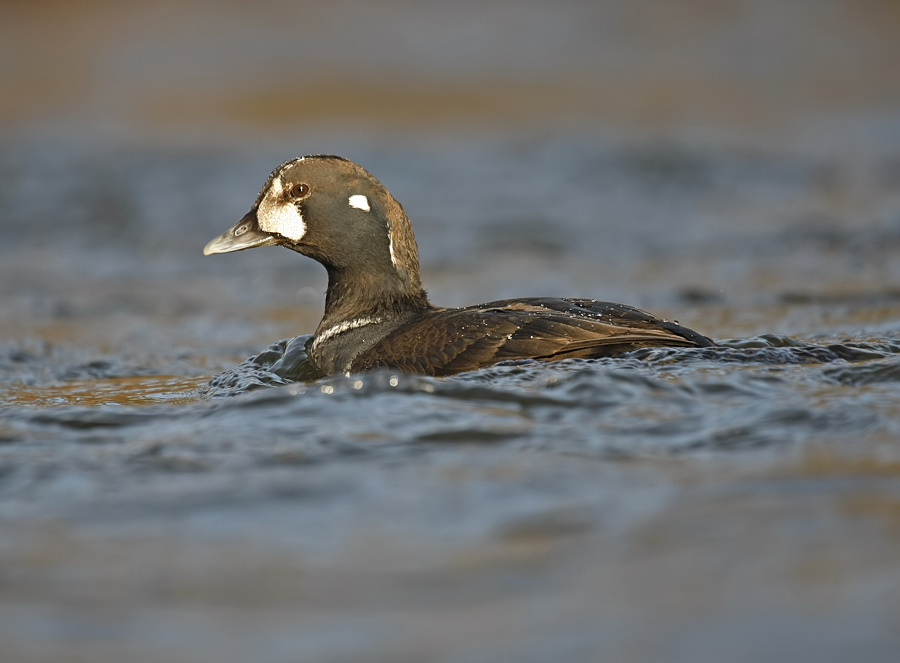 During the month many patches scored with Whooper and Bewick's Swans, a number of patches recording the latter among their patch highlights. Scouring flocks of geese also paid dividends, Bean Geese being recorded at a number of sites and a Black Brant at Topsham.

Even more of a challenge than scouring the geese flocks is taking on the gulls. Grilling winter roosts really paid off for a number of patches as an influx of white-winged winter visitors scored points for many. The Bonaparte's Gull stayed on at Dawlish, while Cathal Forkan in Galway added Ring-billed Gull — surprisingly the only patch to do so in January. Caspian Gulls are becoming more regular these days, as evidenced by the number appearing in January, perhaps as birders become more savvy to this Herring Gull spin-off. Even so, four in January at the Nunneries — a site where they had never been recorded before — was quite exceptional. John Bowler on Tiree found perhaps the rarest find of the month, a first-winter American Herring Gull.

Wintering raptors in the month included Rough-legged Buzzards at a number of sites and White-tailed Eagle putting in spectacular appearances at a number of Scottish sites. Goshawk was also reported quite widely in January - far from the easiest raptor to identify and catch up with. A Gyr Falcon at Old Nisthouse was a highlight of the month for the finder, but they did not take any points because of the possibly dubious origins of dark-phase birds in Scotland. 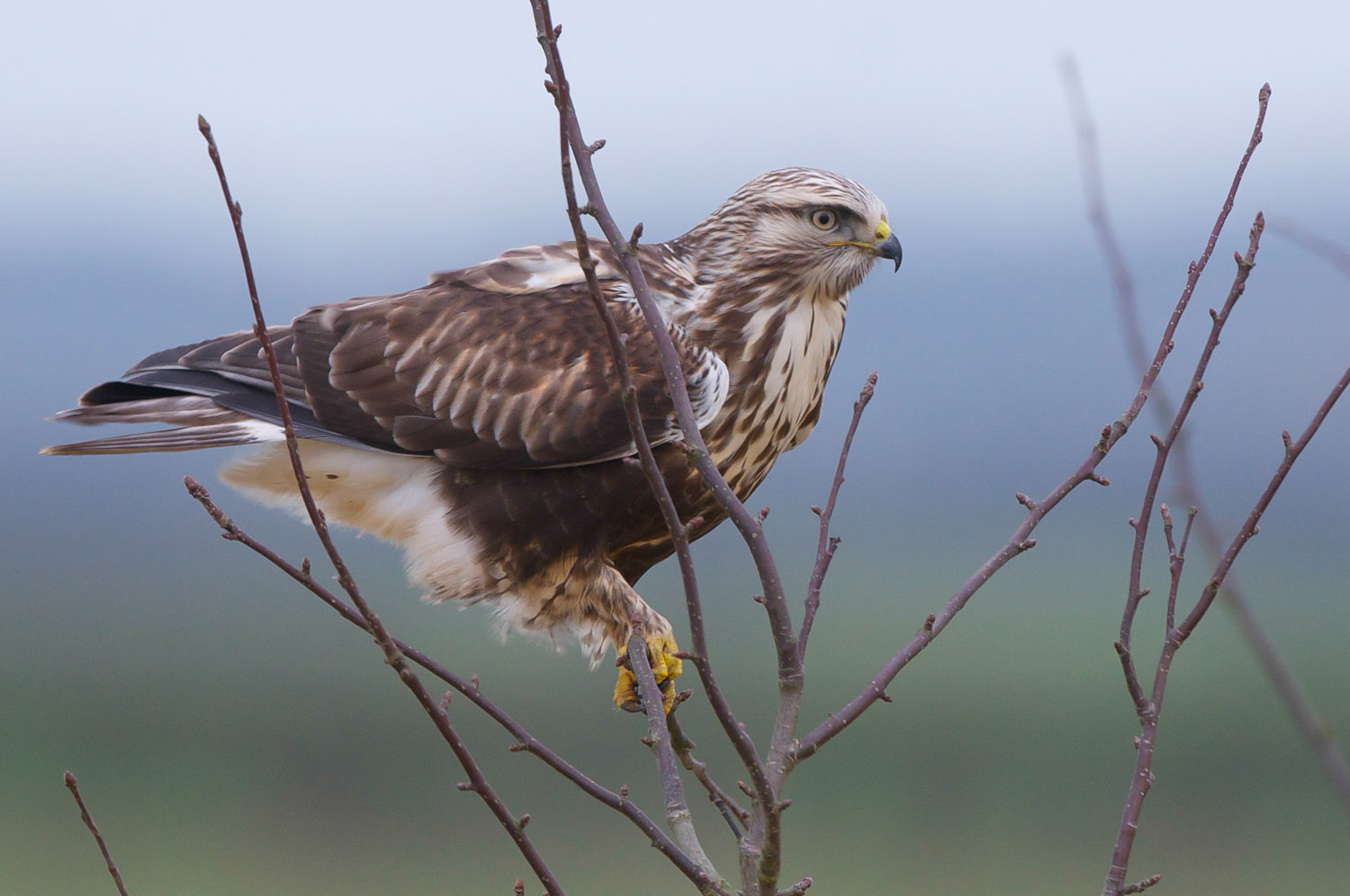 Typically, notable waders were in short supply in January, but a Greater Yellowlegs at Titchfield Haven was an exception. The Glossy Ibis and Great White Egret theme from 2014 continued into 2015, however. They are becoming regular now and may not warrant a mention in this article in future — who'd have thought that 10 years ago!

There were a number of unseasonable finds in January, some patchers striking lucky with a flavour of summer. A Turtle Dove at Lowestoft was equalled only by a Reed Warbler that put in an appearance at Marston Sewage Works. Sandwich Terns were recorded at Burntisland and Galway, while Siberian Chiffchaffs that arrived in the autumn have stayed on and were recorded at a number of sites. Yellow-browed Warblers put in appearances in Cornwall at Loe Pool and the inland site of College and Argal Reservoirs.

Just the one patch in the month recorded Great Grey Shrike and two patchers reported that most elusive of British birds, the Lesser Spotted Woodpecker. Black Grouse was a new bird for PWC and was recorded at two sites in the month. The long-staying Penduline Tits at Topsham were again present on and off, and a popular pair of Serins put in an appearance at Shoeburyness, thereby falling within the boundaries of Max Hellicar's patch.

Final mention goes to the bird of 2014. The Blyth's Pipit at Pugney's convincingly won the 2014 best find competition, and stayed on into January to provide a nice five-point kick-start to the year for the two patchers covering the site this year.

And now to the tables. Any score over 50% is a very good start to PWC in the first month. So to see a number of patches already heading into the realms of 70% is a fantastic effort. In fact, three of the four patchers that have hit this mark are members of the PWC Admin Team! Keith Dickinson at Adel Dam tops the pile with 78% already but there is plenty of time left to go in the year in what looks like it will be a fierce competition. 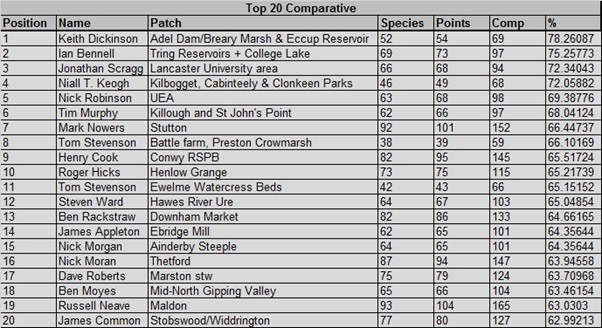 A number of sites have already passed the 100-point barrier in the first month. John Badley at RSPB Frampton/Freiston leads the way with a mighty 133 points. James Brown at Lowestoft has also had an excellent month, while American Herring Gull and White-billed Diver have helped John Bowler and Paul Higson into 3rd and 4th respectively. There are plenty of big hitters waiting in the wings, however, as the competition starts to hot up with spring just around the corner. 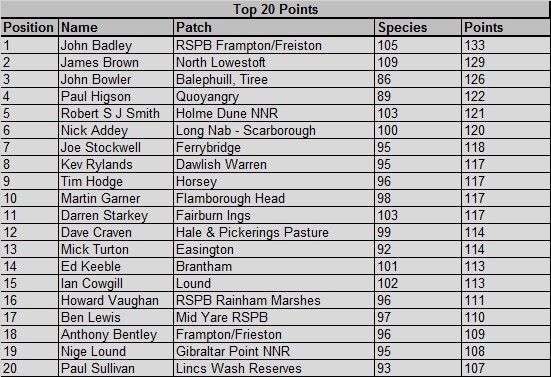 The 'quality not quantity' league is topped by Sean Morris on the Isle of Rum with an excellent 1.44 points-per-bird. Spring and autumn are the typical seasons for racking up multi-scoring birds, so a score that high this early is a fine start indeed. It is good to see a top 20 with a wide scattering of sites across all four corners of the UK from Rum to Scilly and Hesketh to Easington. 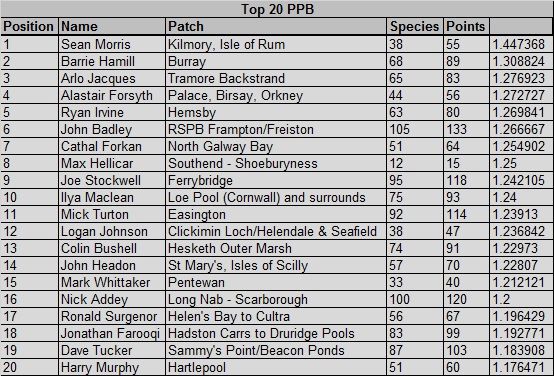 The opposite of the previous league, this one is all about quantity not quality. James Brown, who has performed so well in the overall points league, takes the honours here with 109 species seen including a very unseasonable Turtle Dove. Seven patchers in the month have topped the 100 species mark, which is an incredible feat this early in the challenge and must have taken many hours of patch dedication. Of particular note are Darren Starkey at Fairburn Ings and Ian Cowgill at Lound, who registered great scores at inland sites. 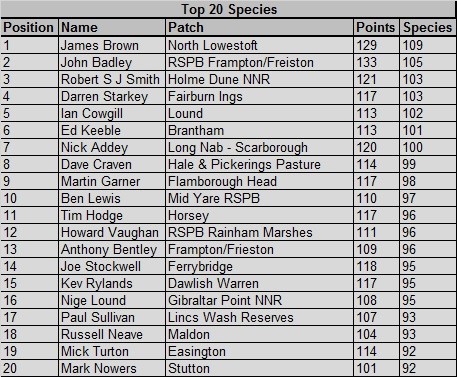 Darren Starkey and his Fairburn patch is leading the Inland Top 20 with a four-point advantage over Ian Cowgill at Lound. Ben Lewis in the Yare Valley is heading up East Anglian interest on 110 points. The vibrant competition in the Inland North mini-league filters into the national league, with nine of the top 20 drawn from here. 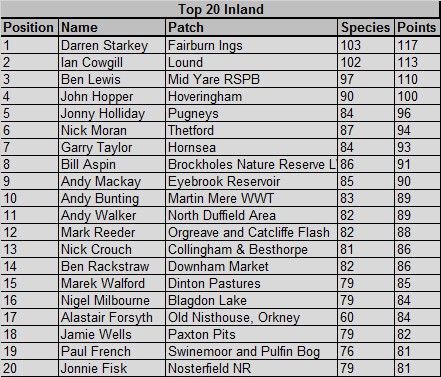 It is good to see 29 NGB patchers submitting scores in January. It promises to be a great competition this year. Joe Stockwell at Ferrybridge takes an early lead, but Anthony Bentley at Frampton/Freiston is pushing him all the way. Jonathan Farooqi completes the top three, falling just short of the 100 mark after the first month. 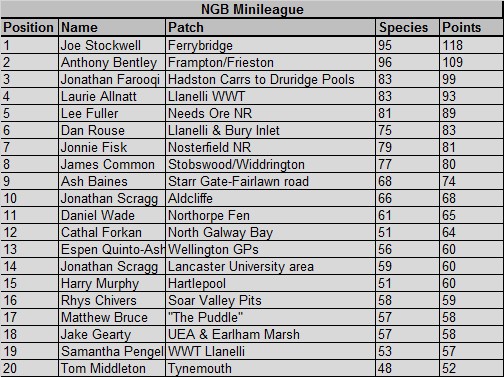 Many birders take their care for the environment seriously, and these more than most. They will be patching without powered transport this year (pedal power is allowed!). A titanic Lincolnshire battle at the top sees Anthony Bentley at Frampton/Freiston pipping Nige Lound at Gibraltar Point by a single point, both patches topping the 100 points mark. Ian Pitts and Nick Moran are joint third. There is plenty of time to go! 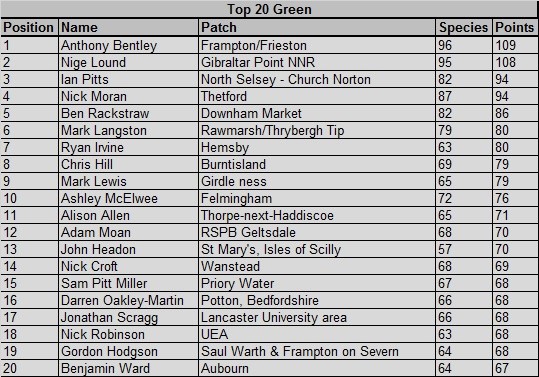 The focus for BirdTrack this year is complete lists and this is where the prize will be won. While both records and lists are useful, more information can be gleaned from complete lists and this is therefore a focus for the BTO. BirdTrack is very easy to use and can really add to the understanding of your patch. James Common at Stobswood leads early on with 57 lists and Jonny Rankin has also hit the 50 mark. BTO's own Nick Moran ('Mr BirdTrack') is in third with 47 lists completed. 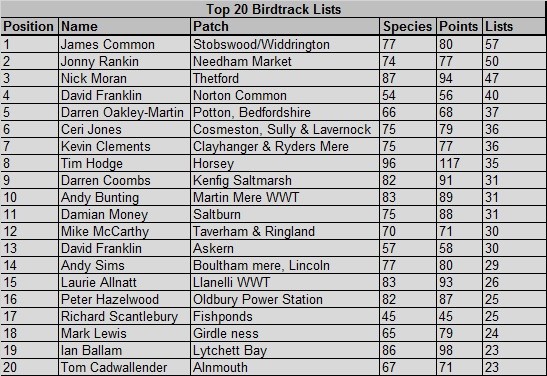