Summer seems so short these days. It only seems like last month that Patchwork Challenge contestants were knee-deep in a classic spring fall, and yet here we are in September already, having just had a classic early autumn one.

While the east coast saw the lion's share of the action, there are Patchwork Challenge patches all over the country with stories to tell, so let's have a look elsewhere first.

In recognition of the fact that our scoring system might favour those lucky enough to be on the coast, we've introduced an inland top 20, for which BirdGuides have very generously supplied a year's Bird News Extra subscription as a prize for first place. Many inland patchers recorded migrant passerines such as Whinchat among their highlights and best finds, but passage waders such as Little Stint seemed to dominate. One wader really stood out from the crowd though (probably quite literally!) — the Neumann's Flash Stilt Sandpiper. Unfortunately it was not a find for Neumann's regular Pete Antrobus, which would have scored him a handsome 15 points, but as Pete himself said, "c'est la vie"! There were some notable inland finds, particularly for Mark Reeder at his Orgreave patch, who struggled to choose between Great White Egret and Long-tailed Skua for his best find of the month. The skua came out on top in the end... 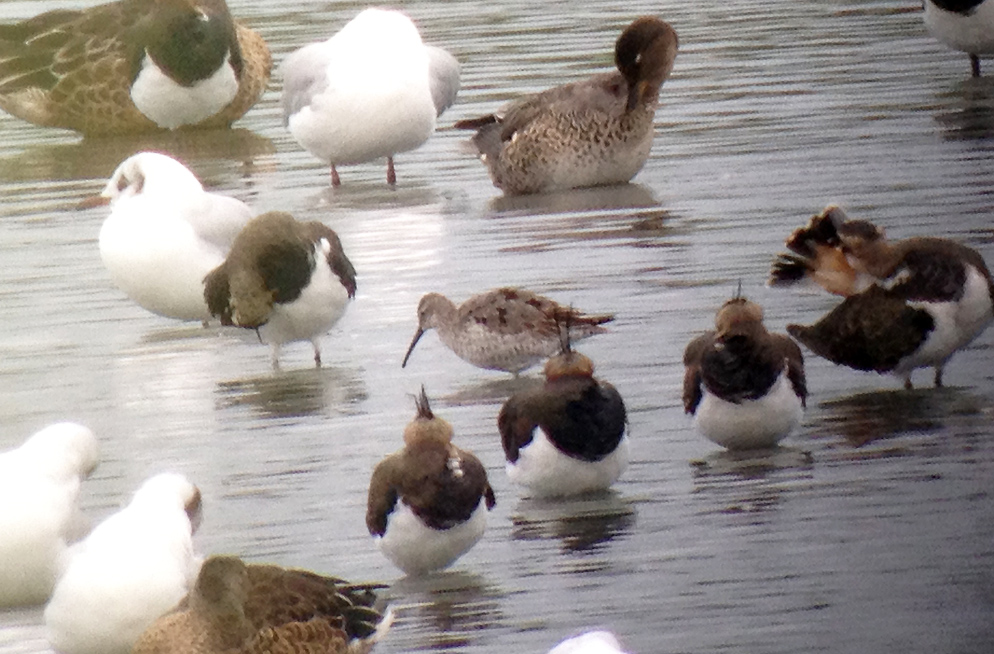 Aside from the Stilt Sandpiper there were a few other waders from the west, with Pectoral Sandpipers turning up at a few western patches and a Buff-breasted Sandpiper found by Barrie Hammill on Burray, Orkney.

The introduction of the highlights and best find columns to our scores forms on the blog have encouraged a few contestants to report their alternative highlights and best finds. This is a concept that I'm familiar with, as one year my best find on patch was a rather damp £20 note (which I handed in to the police of course!). Phil Woollen must have had a quiet month at Backford Cross as he reports "at least it's been sunny", and Graham Powell's highlight was the new menu in his local pub. I like the idea of a patch list competition based on birds seen from the local pub, but I'm not sure how reliable any of the scores would be! In the meantime, let's hope the sun continues to shine on Phil, and that Graham enjoys his tea.

As I mentioned earlier, though, the birding news during the month of August was dominated by the fantastic fall over the Bank Holiday weekend. One classic early-autumn species was a real feature of that fall and, being reported from five different patches, Greenish Warblers featured prominently on our scoresheet. In fact, a total of eight Greenish were recorded on PWC patches, with seven reported as finds. Alongside the Greenish goodies were decent numbers of other classic early-autumn scarcities, with a few Red-backed Shrikes and Wrynecks making it into people's highlights. Barred Warblers were surprisingly scarce though, considering the timing and conditions, only being reported from three patches. It's always a great bird to bump into, but I should imagine none were more surprised than Stewart Sexton, who bumped into one in his back garden! 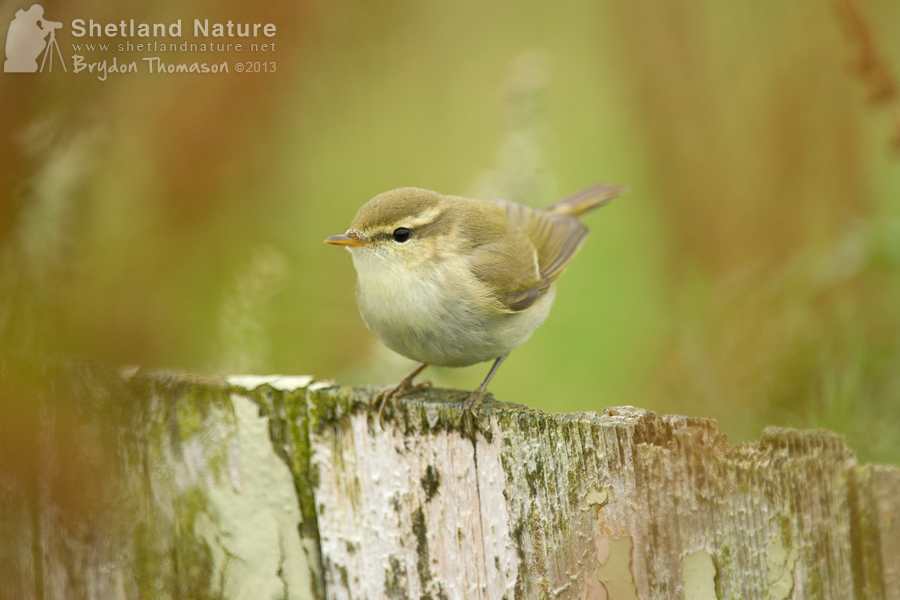 There were 3 "BB" rarities found by Patchwork challengers this month. Citrine Wagtails were found at opposite ends of the country, Moss Taylor picking one up in Norfolk and Rob Fray doing the same in Shetland. Roughly in between, Ian Mills scored 12 points by finding a Bonaparte's Gull on the Durham coast. There's probably nothing there that's in any real contention to win the Meopta and Forest Optic best find competition, but as far as good finds and points scored go, they're both great value.

The only other rarity worthy of mention is the Roller that rolled its way onto the two Winterton patchers' lists. There's two folk who probably wished they got up earlier that day! And spare a thought for Ryan, whose Hemsby patch missed out on this by a matter of a few thousand metres. 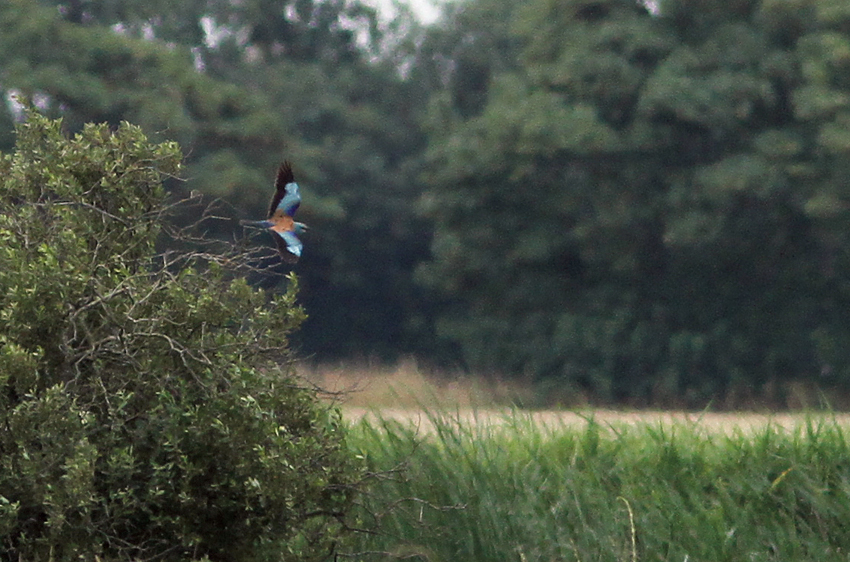 In other developments, we are pleased to announce that James Spencer has stepped up to the plate and taken on some of the day-to-day running and forward planning work for the Patchwork Challenge. He's only been with us a week or so but he's proved invaluable already. Among other things, he's got a PWC list on Bubo Listing where contestants can log in and update our cumulative total themselves, which make our lives a lot easier. Our total is now 285 species, just 15 short of our hoped-for 300. We'll then also be able to compare future years' totals a lot more easily, and also keep a running total of species seen on PWC ever!

There's a good reason for knowing how many species have been recorded on the Patchwork Challenge, and that of course is that each species translates to a pound for the BTO's Out of Africa appeal: specifically, contributing to the data collation from Patch the Cuckoo's satellite tag. This money will be donated very generously on our behalf by Meopta and Forest Optic, and will help ensure we can follow Patch's remarkable progress through Africa this winter.

Moss Taylor had an excellent end to the month and you can read all about it on his blog. This run of scarce and rare bird finding has helped him leap-frog John Bowler into top spot on the overall points league. Simon Chidwick isn't too far away in third place, while Ian Mills flies the flag for the north-east. Long-time leader Jonathan Gibbs has slipped back to 5th place, but I would expect Minsmere to make a push for the top spot again soon. Or will the Shetland duo make a push up to the top? September and October should be very interesting! 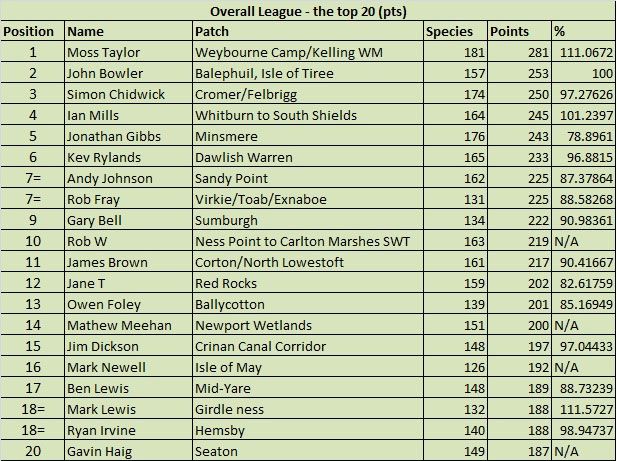 Henry Cook has overtaken Sean Morris into first place of the comparative league with Roger Musgrove and Gary White not too far behind. All the top 20 have now passed 100%; in fact 28 patches had reached the 100% milestone by the end of August. 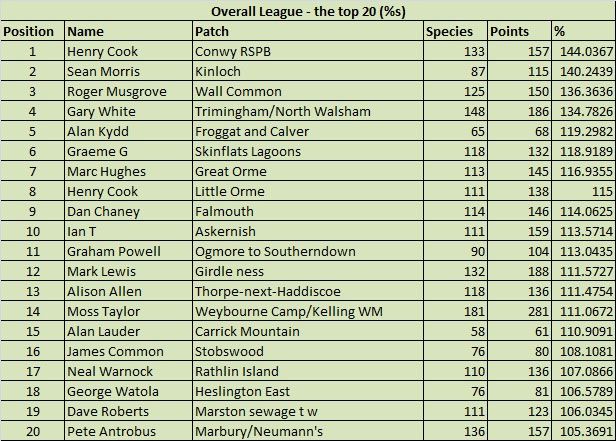 Rob Wilton still leads the way in the non-comparative league. His Lowestoft patch was pretty productive during the east-coast fall at the end of the month. Matt Meehan has reached the 200-point mark, the first Welsh patch to do so. Mark Newell and Gavin Haig aren't too far behind in 3rd and 4th respectively. 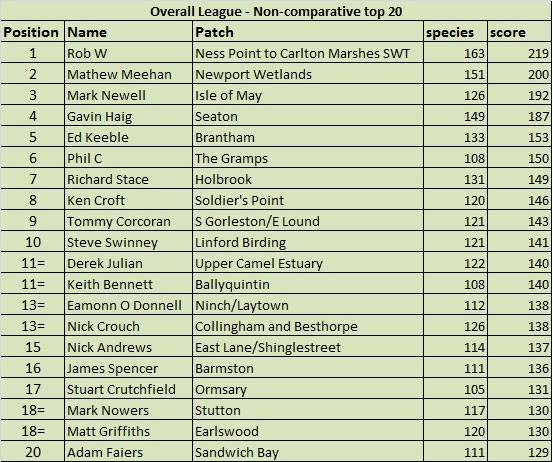 Rob Fray and Gary Bell have leapt into the top positions of the points-per-species league and I would expect their score to increase as September and October roll on. Last month's leader, John Bowler, makes up the top 3, not too far behind. 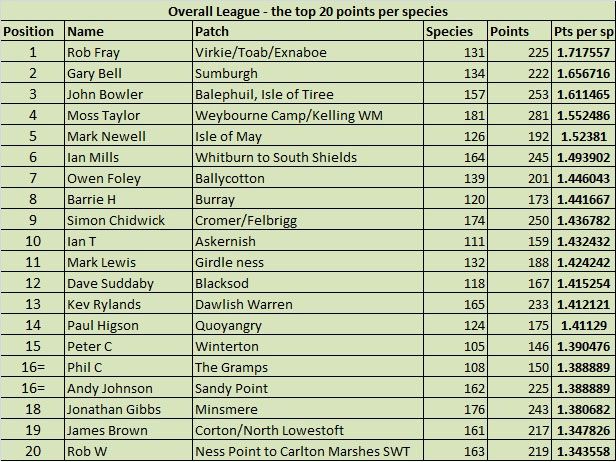 And finally, the league we've all been waiting for, the first showing of the inland top 20! Ben Lewis leads the way with his patch in the Yare Valley, Norfolk. The north of England represents 2nd and 3rd with Jonathan Holliday and Mark Reeder slugging it out. It's a pretty close league and one good find could see anyone leap up a few places. 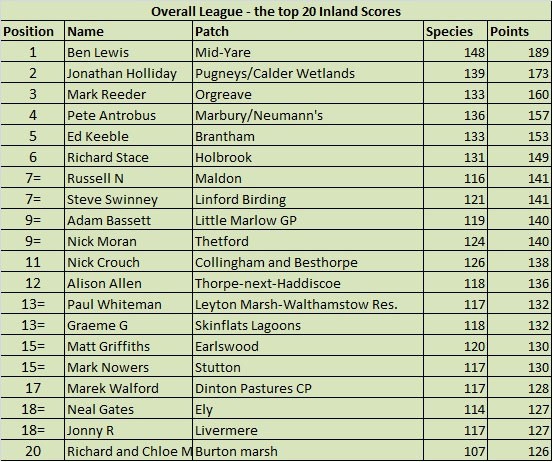 So that's August over with; roll on September...