Previously thought to be relatively ecologically harmless, invasive Ring-necked Parakeets have been seen attacking bats in a Spanish park and ejecting them from tree-hole roosts.

At the turn of the century, the largest colony of Greater Noctule bats in Europe occupied a park in Seville, Spain. However, between 2003 and 2017, the number of trees used by bats in the park fell by 81 per cent, according to a study at the Doñana Biological Station in the city. Conversely, the number of nests of Ring-necked Parakeets, an introduced species native to the Indian subcontinent and East Africa, increased by a factor of 20 over the same period. 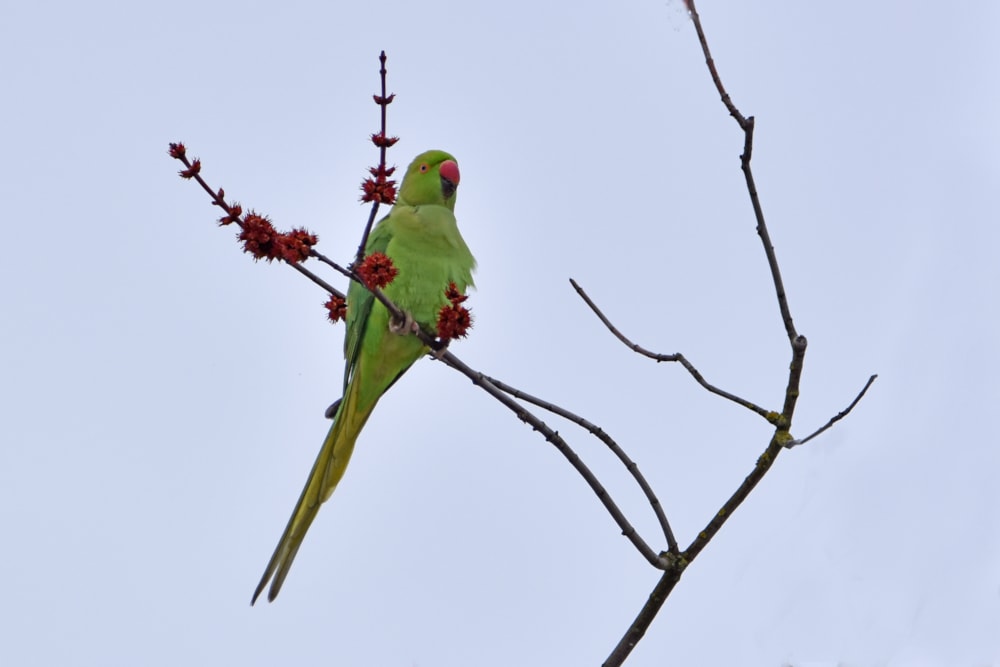 The research team documented parakeets nesting in tree cavities previously occupied by bats. The researchers also observed the 120-g parakeets chasing the 50-g bats out of their nests. Parakeets largely attacked the bats at the entrances to tree holes in the few hours before dusk, obliging the bats to flee during daylight hours (though some bats were able to fend them off). The researchers also found 20 dead and two injured noctules under nest sites, and some were fresh enough to show beak cuts on their muscle and bones. 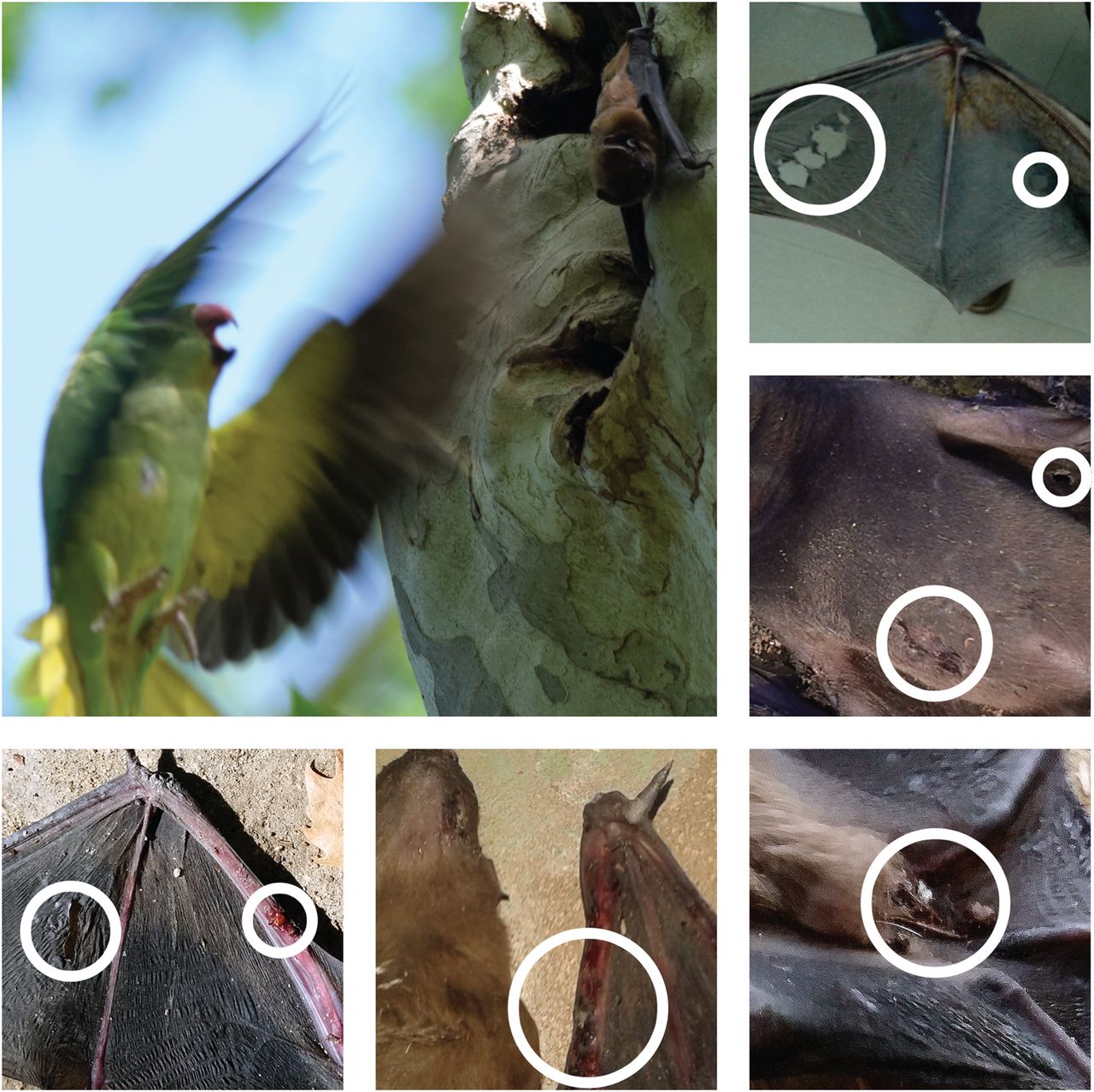 Top left: an adult female Ring-necked Parakeet attacks a Greater Noctule at the entrance of a tree cavity in María Luisa Park, Seville. Other photos: details of different types of wounds caused by parakeets on noctules found dead under their tree refuges (Dailos Hernández-Brito).

In parallel, parakeet numbers increased during the study period, being very scarce until 2013, but showing a 96 per cent increase in the four years thereafter. Greater Noctule bat showed a decline of 70 per cent in the same period (and an 81 per cent fall since 2003), almost a mirror reflection of the parakeet increase. By 2017, the number of tree holes occupied by noctules had eroded down to 14 from 47 in 2013, while those occupied by parakeets had increased from 159 to 311 in the same period.

The latest figures from the British Trust from Ornithology say that there are about 8,600 pairs of Ring-necked Parakeet in Britain, mostly in the Greater London area and originating from escaped caged individuals of the subspecies manillensis (from southern India) and borealis (from the northern areas of the Indian subcontinent), though many suspect that there are more than this present in the country by now. From the Spanish study, it can be seen that Ring-necked Parakeets are very aggressive towards perceived competitors over available tree cavities, causing significant losses to the bat population.

The authors warn that, without further action, the already rare bat could become endangered within a few years in Spain. It is likely that the problem is already well out of hand in Britain also, though it is not known whether the parakeets have a truly deleterious effect on other species using tree cavities, such as Eurasian Nuthatch or Stock Dove. 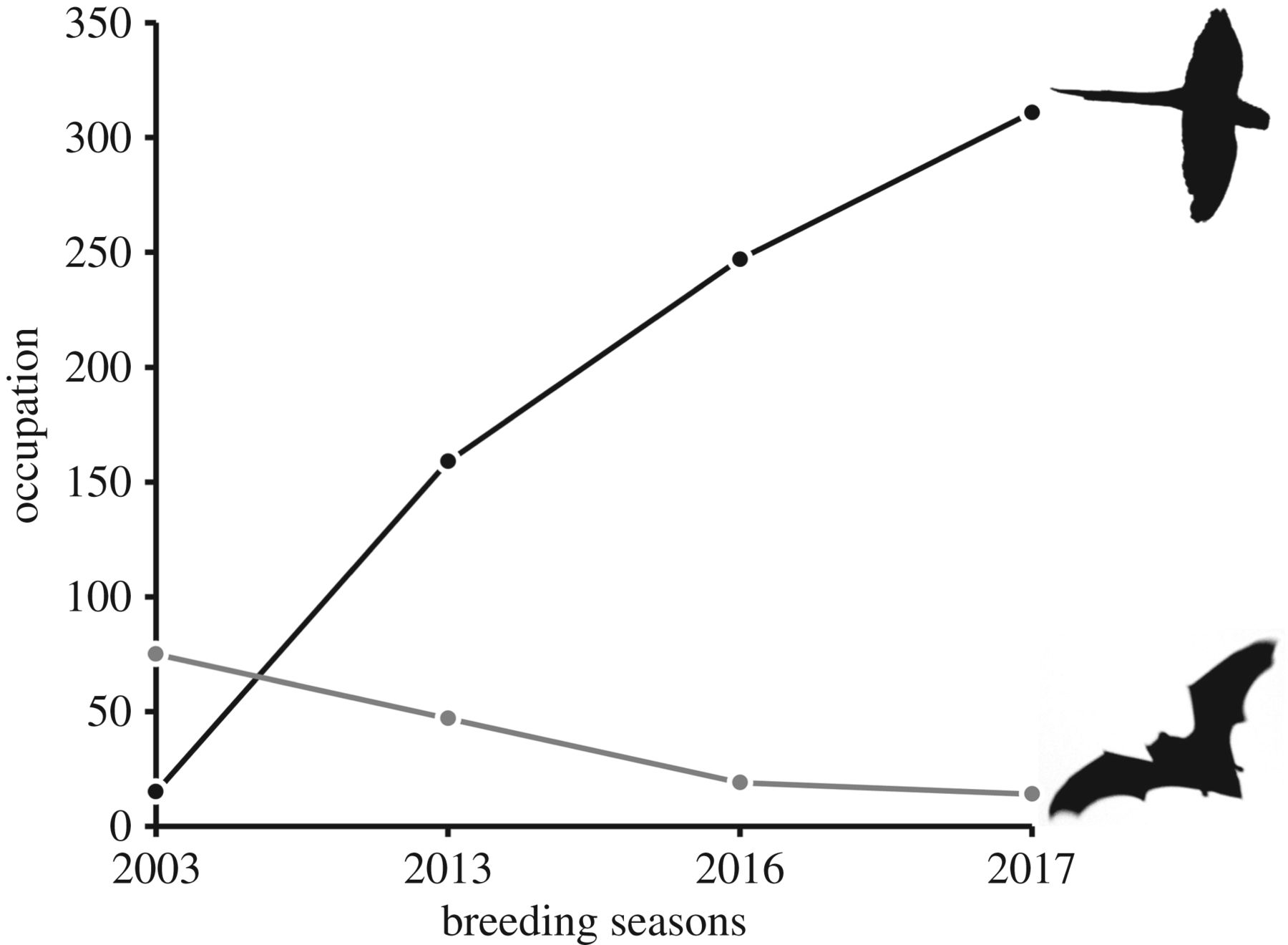 Above: a graph in the paper shows the ascent of Ring-necked Parakeet in Seville contrasted with the decline of Greater Noctule. 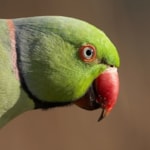