When it comes to jargon, few fields can compete with ornithology; obscure terms like supercilium and scapulars, or lores and lekking, which would mystify the uninitiated, are part of the everyday vocabulary of many birders. But one field surely outdoes even ornithology in its vast corpus of arcane terminology: church architecture. The conversation of ecclesiastical antiquarians is liberally scattered with references to clerestories and aumbries and spandrels and the like.

A case in point is misericord. This word, like so many in the field, has a rich and interesting etymology. It comes from Latin roots meaning "merciful heart" and can refer to a dispensation from the normal privations of monastic life such as fasting, or alternatively describes a dagger used to deliver the chivalrous coup de grace to a mortally injured knight. But in the context of church interiors, it refers to a sturdy wooden bracket, often carved from a single piece of oak, attached to the underside of a hinged seat, especially in the choir stalls. In the early medieval church, participants were expected to remain standing throughout the lengthy prayers of divine offices. As a kindness to elderly members of the choir and clergy, the standing celebrants could discreetly rest their priestly posteriors on these platforms while appearing to remain devoutly upright.

As they were normally concealed, misericords offered the medieval wood-carvers an opportunity to escape the formal strictures of their religious work, and many took the opportunity to depict comic or profane subjects from fable or secular life: drunken men, scolding wives and peasant musicians feature frequently, as do mythical beings and pagan symbols such as dragons, mermaids and the mysterious Green Man. At their best they can offer an insight into the very human preoccupations of the everyday medieval mind, and capture aspects of ordinary rural lifestyles rarely recorded elsewhere.

Another common source of inspiration for misericord carvings is the natural world. Domestic livestock such as pigs, sheep and geese make frequent appearances, as do familiar British wild animals like foxes and squirrels. But sometimes the carvers elected to depict creatures outside their immediate experience, and for these they relied on popular books known as bestiaries, which contained illustrated fables and allegories concerning various animals, including unfamiliar creatures from overseas. Thus in medieval English carvings one sometimes encounters anatomically questionable tigers and elephants, which all add to their quirky appeal for the dedicated misericord hunter.

A recurring avian motif is "the pelican in her piety". Many of the bestiaries record the belief that pelicans kill their young, then wound their own breasts and revive their brood with the resulting blood, probably in allegorical reference to the wounds of Christ on the cross. This myth first appears in The Physiologus, a 2nd-century Christian work depicting animals both real and imaginary. The story may have been elaborated from genuine observations of pelicans feeding young: some species of pelican have pink-tinged plumages and a red bill-tip. A typical example occurs in the famous wool church of St Peter and St Paul in the picturesque medieval town of Lavenham, Suffolk: 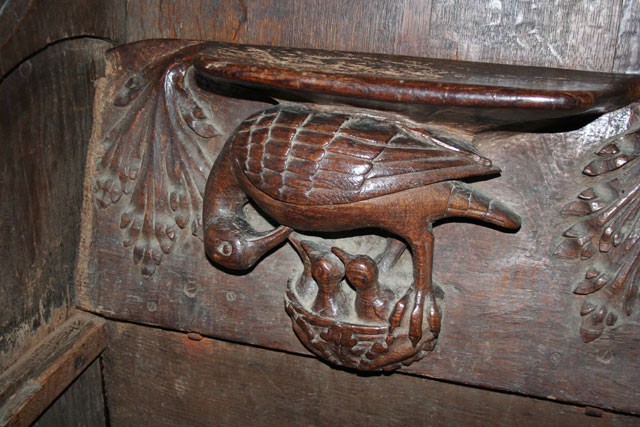 It's fairly obvious to anyone familiar with the real thing that the carver has never seen a pelican — like many similar depictions, it shows a rather elegant swan-like bird with a curved bill, rather than the dumpy build and out-of-proportion pouch of the genuine article, and is presumably copied from a stylised stock illustration in a bestiary. As it happens, the Dalmatian Pelican Pelecanus crispus did once breed in East Anglia, as is evident from archaeological finds, but these date from no later than the Iron Age, long before our medieval craftsman put chisel to oak some time in the 15th century.

An altogether more unusual ornithological depiction at Lavenham, and in marked contrast to the stereotypical carving of the pelican, is a second misericord showing a curious tableau of two long-billed and leggy birds clasping the ears of an unfortunate human head in the centre (which, according to some accounts, is the disembodied head of a dead man): 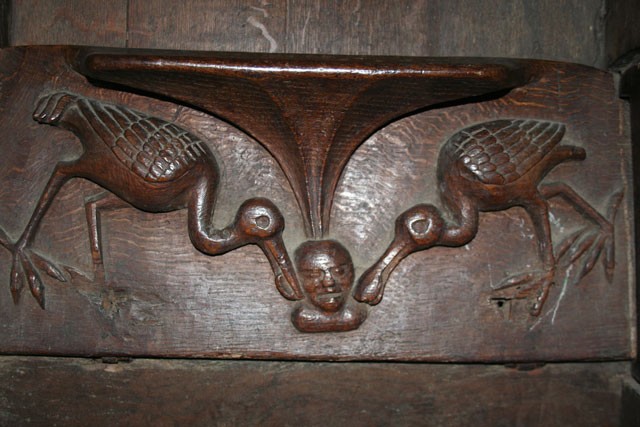 The unmistakeable spatulate bill of the bird on the right clearly identifies it as a Spoonbill, and antiquarians have observed that the confidence and accuracy of the carving may indicate that the craftsman was personally familiar with the species. This perhaps reflects the greater abundance of the species in the East Anglian Fens of the Middle Ages than now (Spoonbills have returned as breeders in East Anglia only in very recent times). There are numerous archaeological records of Spoonbill bones from the medieval period, and contemporary references to its breeding in Britain (though the situation is confused by the species' old name of shoveller or shovellard, leading to potential confusion with references to Shoveler Anas clypeata).

But it was the identity of the other bird, the bird on the left, that intrigued me more when I saw the carving for the first time recently. Some writers casually refer to the carving as showing "two Spoonbills". I would immediately suggest that these people have not looked closely enough at the carving: it seems clear that the apparent rounded shape at the end of the left-hand bird's bill is merely the (oversized) ear of the central head, not part of the bird itself. Unlike the convex spatulate mandible of the right-hand bird, the rounded element on the left is concave, consistent with a cupped ear, and bill and ear are clearly delineated, to my eyes at least. Other authorities — perhaps the majority — describe the misericord as showing "an Ibis and a Spoonbill". Again, I'm not convinced: anyone familiar with Glossy Ibis would surely have noted its most obvious feature, the long, curving bill, and our bird here has a resolutely straight bill. A third school of thought suggests that the bird is a stork, which has some merit — the bill certainly looks a better fit for White Stork rather than Glossy Ibis.

However, I have an alternative candidate, one that I've not found mentioned in any of the literature I've examined. Have a closer look at the carved bird's tail: 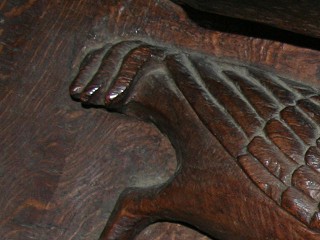 The curved, drooping feathers are carefully and deliberately modelled, and clearly distinct from the straightforward short tail of the Spoonbill on the opposite side, and as soon as I noticed this telling detail I was forcefully reminded of another recent East Anglian colonist with a historical presence in the area: 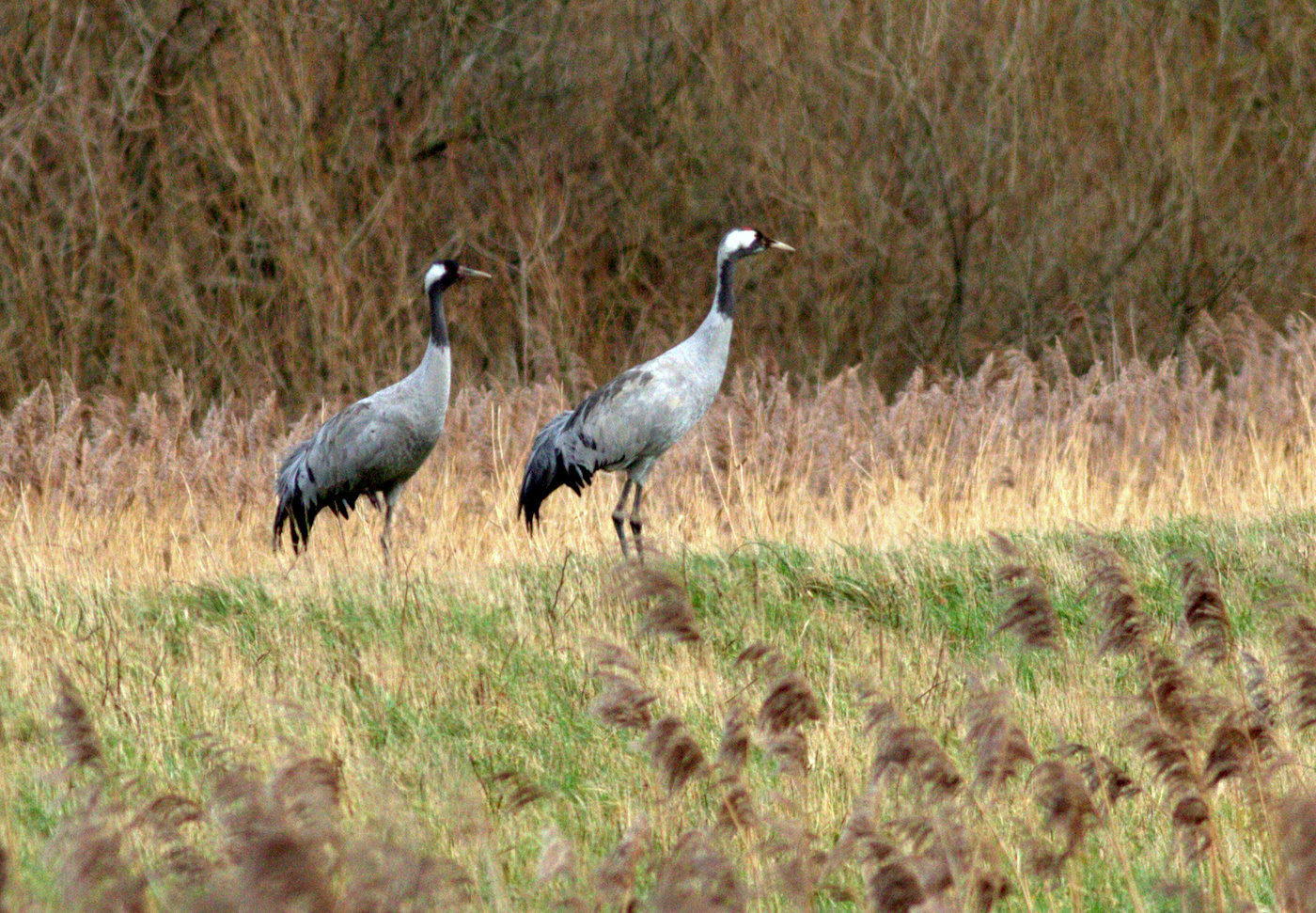 The archaeological and written record indicates that Common Cranes were much more abundant in former times than they are now — certainly commoner than ibises and storks — and what's more they were culturally and economically important: although populations seem to have been in decline by the 1530s and 1540s (half a century or so after these carvings were made), there are references to Henry VIII imposing fines for the stealing of cranes' eggs, and the species is widely listed in accounts of medieval banquets, and may even have been raised in captivity for culinary purposes.

I'd be interested in other views from those with an interest in medieval iconography or historical bird populations, and I'd encourage anyone finding themselves in a country church to have a look under the seats in search of the lively work of these marvellous medieval master craftsmen.