This unique visitor from the northern tundra is an autumn prize for any patch-watcher. A ‘brawny’ bunting, it is actually a little smaller than Snow Bunting, but gives the impression of size and is just as easily confused in flight with Skylark as, say, Reed Bunting, and these latter two species often share its favoured coastal habitat of beach fringes and saltmarshes.

Along with its chunky jizz, Lapland Bunting has a thick, short, yellowish bill with a black tip, and a high-based lower mandible which gives the expression of a wry smile. All ages and both sexes have a broad rufous greater covert panel fringed on either side with white wing-bars. The lores have a pale, dull rufous tinge which curves down onto a wide chestnut cheek patch, bordered with black; this reddish-brown colour also extends as a broad supercilium, and the whole effect is of a quite open, ‘innocent’ face. There is a pale median crown stripe and the nape is also rufous tinged. The primary extension is lengthy, easily reaching past the end of the streaky brown rump. The uppertail is greyish brown and forked in typical bunting style, and thinly edged with white.

Dark flank streaks surround a plain, creamy-white belly, and this colour extends onto the undertail coverts. The legs are dark brown to blackish, and a lark-like hind claw is present, similar to Snow Bunting.

Birds will be largely out of summer plumage by the time they reach our shores, and males are a mere shadow of their breeding glory, with a bib of dark spots around a long white throat patch and a warmer head tone than females, particularly on the nape. Females also have these diffuse dark scales on the breast, though less so on average. First-winters can be told by their finer, browner breast and flank streaking, and on average they have more diffuse white edges to the wing panel. On the ground, Lapland Bunting can be surprisingly secretive, often creeping through grass and weeds instead of flushing; they can also defensively freeze on approach.

The most typical ‘Lap’ sighting is of a flying bird, particularly inland over reservoirs and farmland, where they are more scarce and rarely actually land. Most often flushed from coastal marshes and fields, it ascends rapidly and comparatively high and powerfully. In flight, it can resemble a small Skylark, but has a more rounded-looking head due to its ‘snub-nosed’ bill, and a thinner rear end, with quite a short tail for a bunting. The rufous wing panel can often be seen in flight, if the bird is not shooting off straight ahead of you. Reed Bunting has a lighter, more bouncy flight style and a longer tail, but can be a pitfall to the inexperienced.

A bird will often, but not always, announce itself by its call, a soft teu, a little like one of Reed Bunting’s calls, followed by a harsh prrrtt, both similar to Snow Bunting, but these sounds become more distinctive with practice. These notes can be uttered on their own, and a harsher choop is also used in flight or when feeding on the ground. 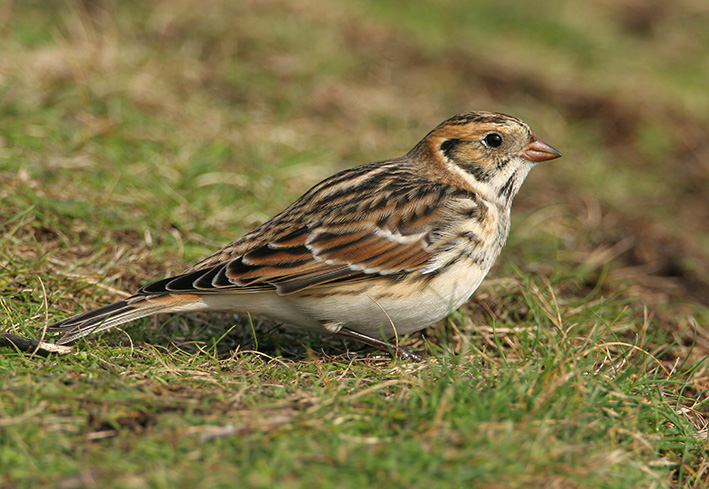